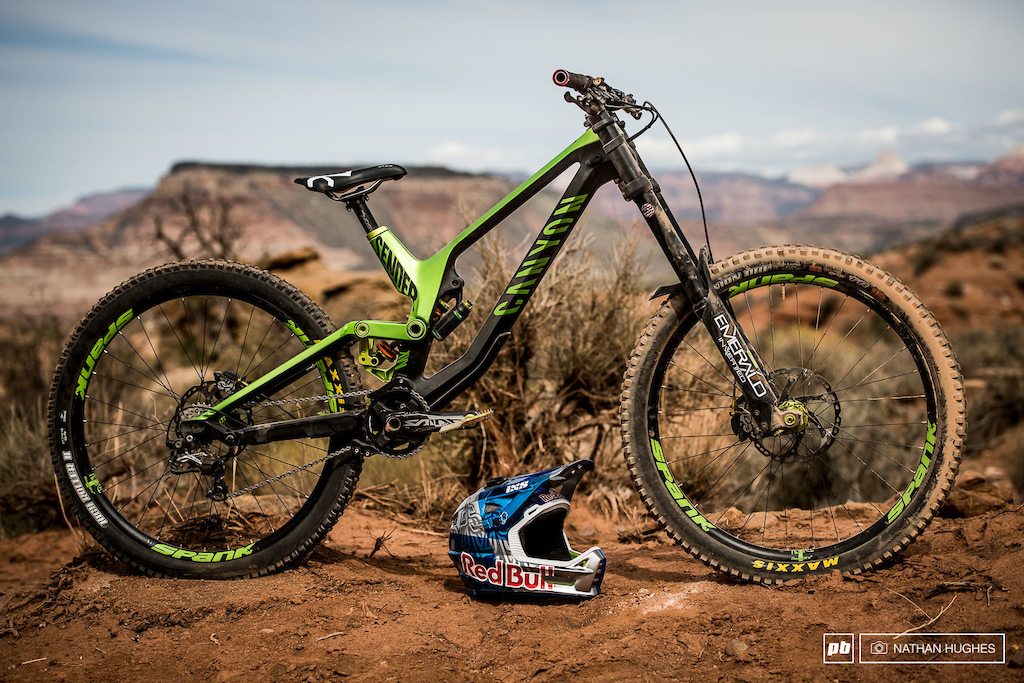 Darren Berrecloth is aboard possibly the most appropriately named bike – ever – for the Red Bull Rampage: the Canyon Sender. The bike was developed more as a downhill race bike, but that doesn't mean it can't be pulled into duty to take on the steep ridges and mega hucks that await the veteran competitor. Berrecloth made his first Red Bull Rampage appearance back in 2002, finishing third, and has consistently remained a podium threat with his technical big mountain lines. 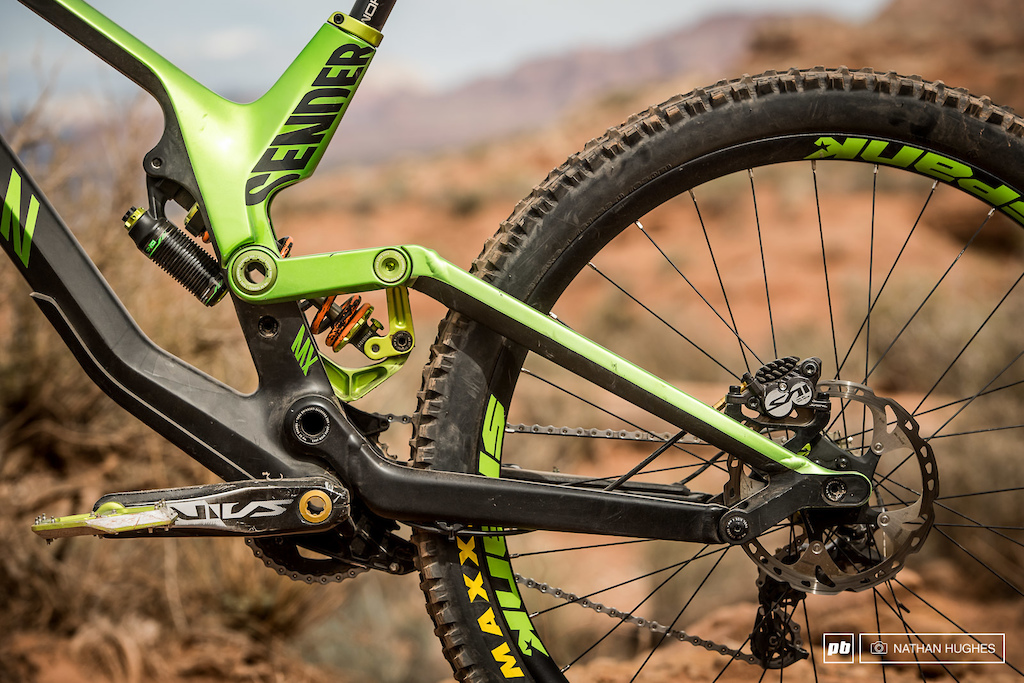 The Sender uses a Horst link suspension design that has an additional link driving the shock for its 200mm of rear travel. Canyon call this configuration TIPS, short for Triple Phase Suspension. 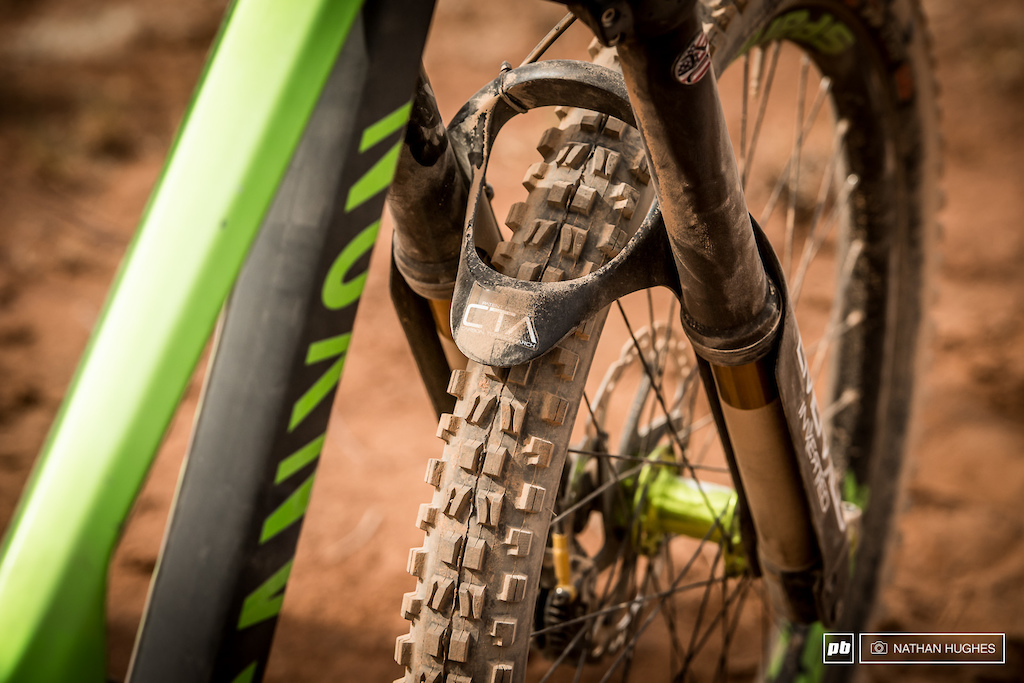 The green machine is decked out with a DVO Emerald inverted fork up front... 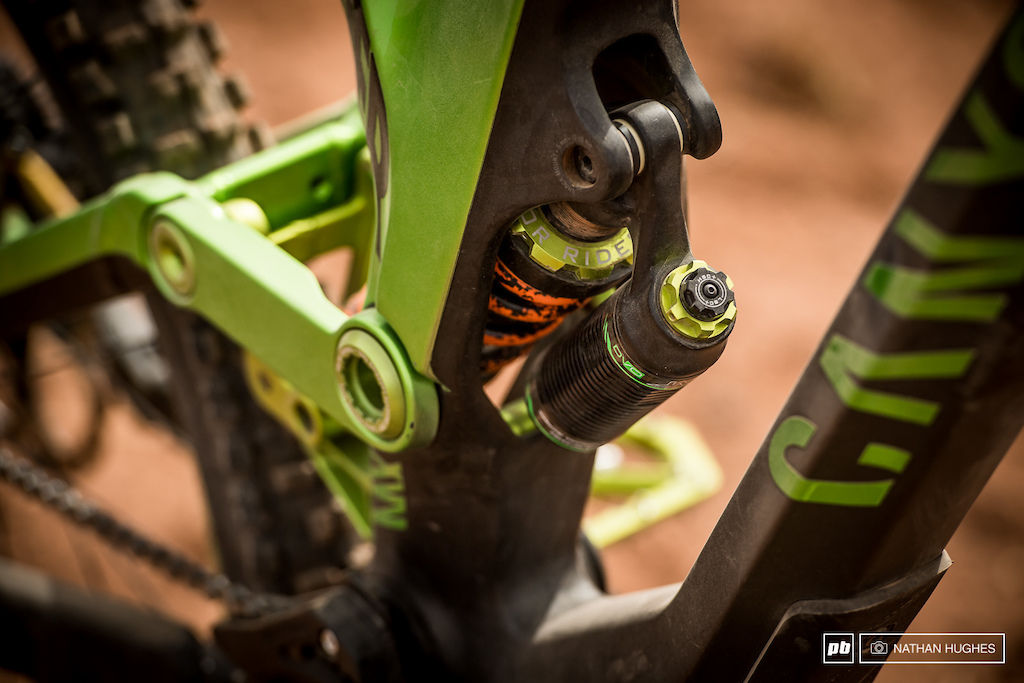 And a DVO Jade coil shock in the back. 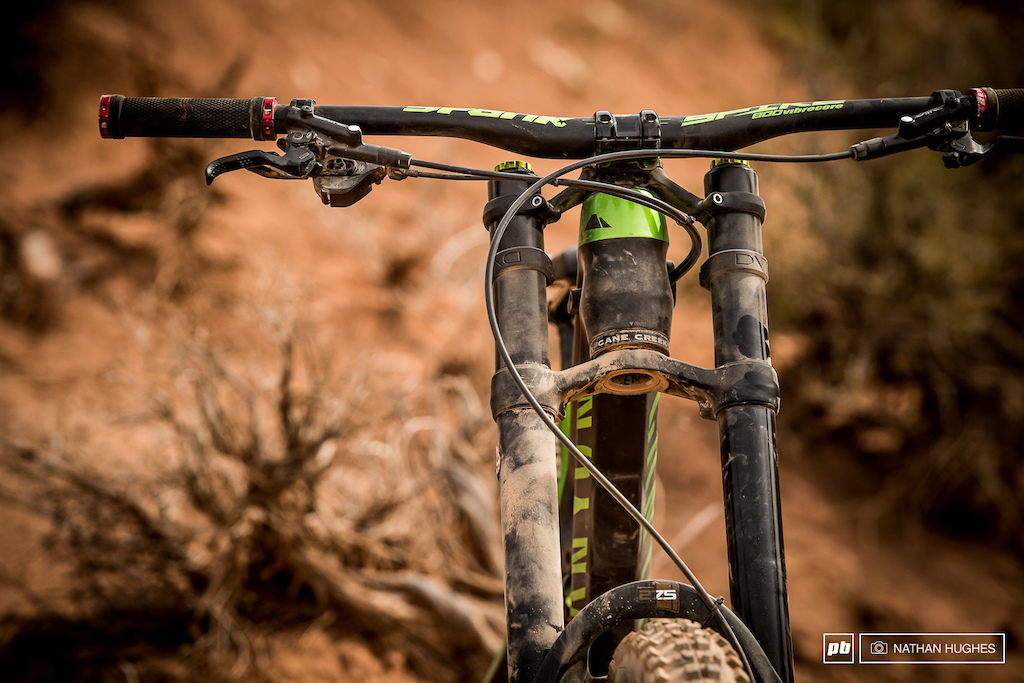 Spank's Vibrocore handlebars have a foam core that's designed to help reduce the vibration the reaches a rider's hands, something that could be useful when dealing with the big impacts found on Berrecloth's line. Darren even has his own signature grip from Lizard Skins, the Bearclaw lock-on. 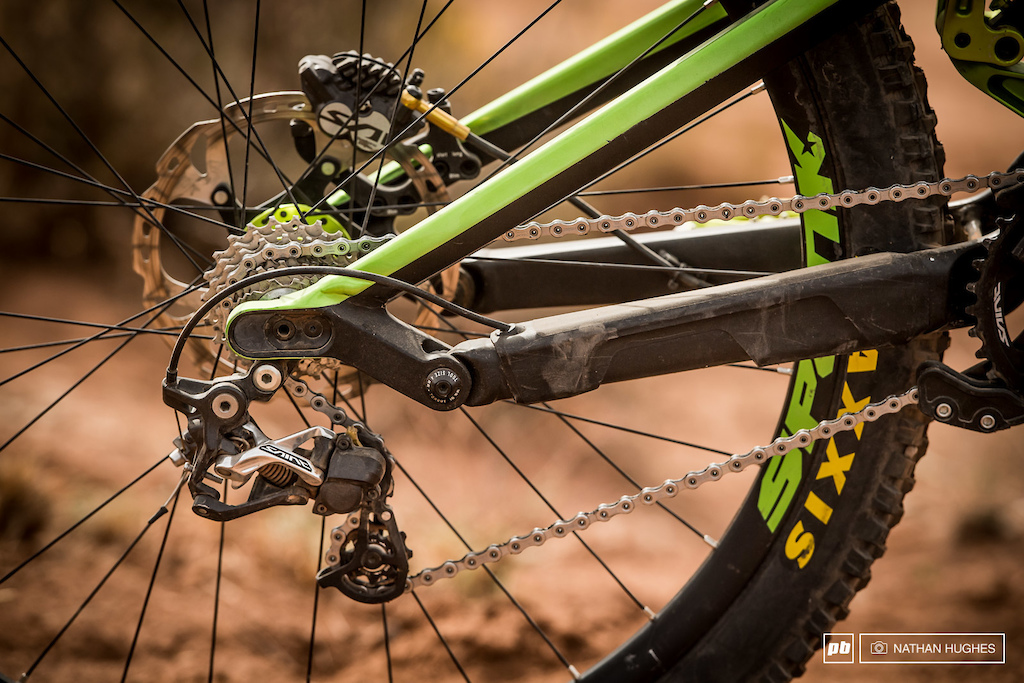 Berrecloth's running Shimano Saint brakes and drivetrain, Spank wheels, and 27.5" Maxxis tires - a Minion DHF up front, and a Highroller II in the rear. 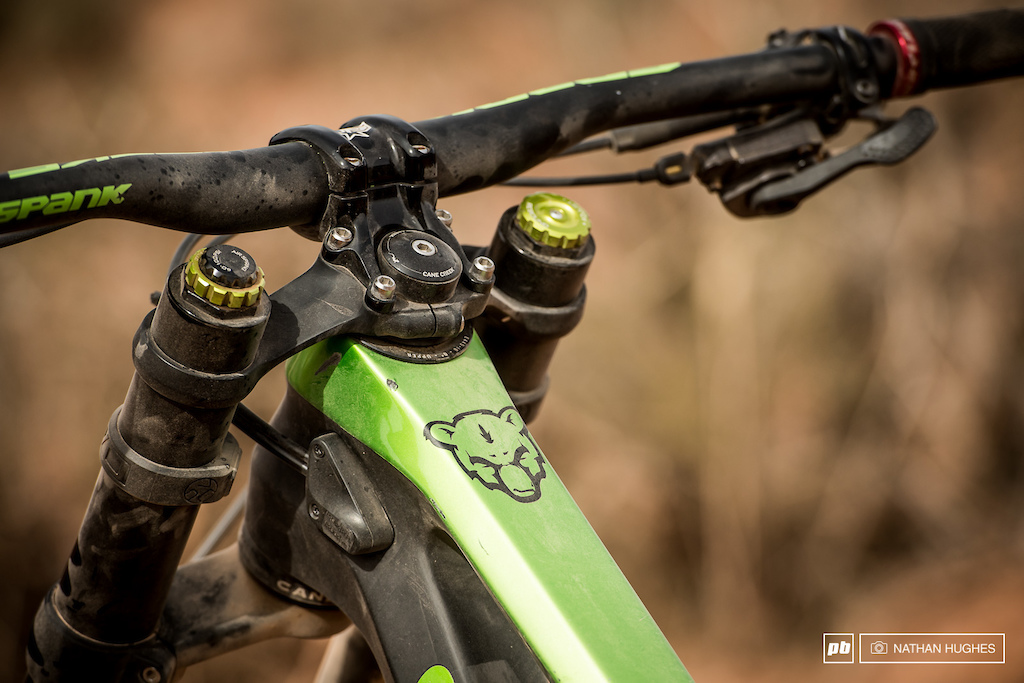 When you have a nickname as cool as 'The Claw' you get custom top tube stickers. 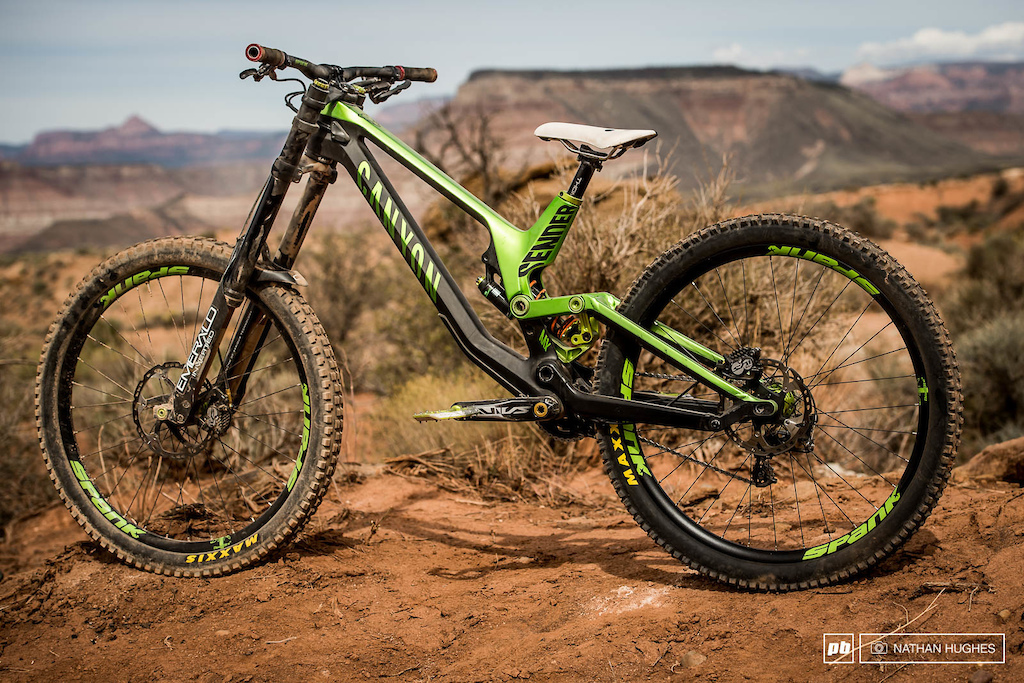 Jamesb15uk (Oct 16, 2016 at 5:11)
@Caiokv: Of course the integrated bumpers would be enough... for any normal person. But they ain't hucking off Rampage!! When those bikes go tomahawking off a cliff/ridge, its enough to split forks in half and crumple wheels like tin cans.

labrinsky (Oct 18, 2016 at 2:41)
@Caiokv: and if you look there's a paint chip on the left side of his top tube which could have easily been caused by his fork's top crown hitting the frame. maybe he needed the other bumper to keep it from hitting

DragRider (Oct 15, 2016 at 7:41)
@RollinFoSho: I you zoom on the drop out's from gear side in the corner of the chainstay you will see small crack is already developed just bellow the cable, exactly where my friend's bike exploded

GravityFan (Oct 15, 2016 at 13:26)
@DragRider: Do you mean at the chainstay or seatstay? The chainstay is protected and I cant find any crack. But at the junction of the seatstay and dropout some might see something like a crack. Do you mean that?

blowmyfuse (Oct 17, 2016 at 9:29)
@GravityFan: You know what? I think @DragRider is telling the truth. If you look at the picture just above and forward of where the flip chip is on the adjustable dropout where the strut (another name for the piece running from derailleur to the upper linkage) hooks and look at the picture of the non-drive side strut is, it gives that impression.

Might just be a scratch from gravel/rocks/etc...but I'd love to see a pic of @DragRider s friends cracked strut too.

dzenyy (Oct 14, 2016 at 23:05)
@Coldspringer: Wait for 29ers soon. Should roll better through the gnarly stuff. Bigger arc for bigger mountain lines.
Just kiddin', but who knows where the companies will push their riders into.

kennyken1015 (Oct 14, 2016 at 14:19)
I don't need a downhill bike, not one of this calibre, not really in the UK...but feck me sideways I've got a wad of cash coming to me in the new year and seeing this thing...a large proportion of that cash just got reallocated from being spent on the house!

dzenyy (Oct 14, 2016 at 23:10)
It's so cool that this shock's spring is well hidden inside the frame. Seems like everything have to have some imperfections, otherwise this bike is one of the best lookin' i've seen.

Smallbright (Oct 14, 2016 at 9:22)
You better win the rampage this year with that machine Berrecloth!

jaame (Oct 14, 2016 at 21:24)
They should change it from Triple Phase Suspension to Triple Trajectory Suspension (TITS).

akada (Oct 15, 2016 at 6:56)
Put this colour scheme into production on the sender please canyon! I will definitely buy this!

frdh (Oct 14, 2016 at 11:57)
My guess is if you eat shit on a jump as big as the ones at rampage you want to have double the protection for your form/frame. Its not like they need the turning radius.

Gonna be a sad day when I can't get current model tires for my 26.