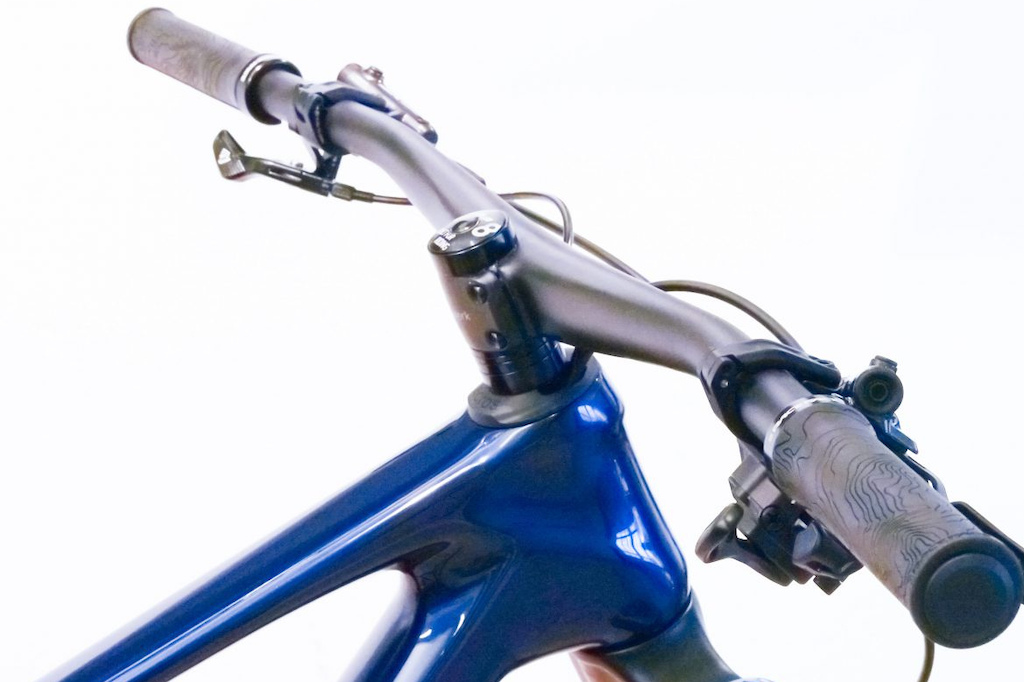 Combining the stem and handlebars into one carbon piece is something that brands such as Syncros, Gemini and Bontrager have been doing for a short while but Faserwerk has now taken it one step further and removed the stem altogether.

Now he's designed and released the Baslerstab (Basel Staff) that takes "a logical step" and bypasses the stem altogether. Instead of a stem, a circular cutout attaches directly to the fork's steerer tube, with a clamp bolted on from the back holding it there. Don't worry though, this isn't the same as the super-short 10mm stems from the early days of Forward Geometry and in fact your hands should remain in roughly the same position as with a regular set up thanks to the shape of the bar with virtual stem lengths of 35mm and 50mm both available. 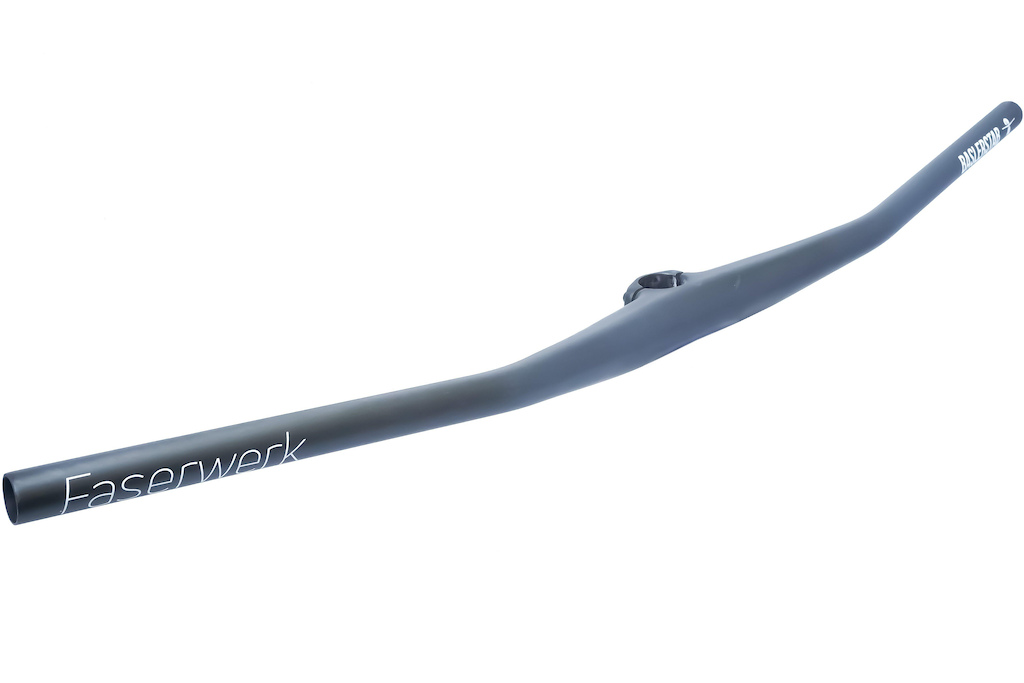 So why bother? Well, the main reason is because of the weight savings. This bar and stem combo is DH rated, 800mm wide and has a claimed weight of 240 grams - for comparison, Gemini's DH only Pollux is claimed to weigh 255 to 275 grams. Some other key figures from this bar include a 15mm rise, 9° backsweep and 6° upsweep.

The component is made in two parts with the bar itself bladder moulded to create a lightweight, high performance tubular structure while the clamp is made using a CPMC (compression molding compound) process that apparently reduces "resin rich areas or voids."

brass-munky (Sep 8, 2021 at 4:08)
@stumphumper92: coming from someone with the name stumphumper. Talk about setting the bar low

fuzzhead45 (Sep 7, 2021 at 14:41)
Grips mounted directly to the front axle, basically you are riding a unicycle while holding a wheel

How do you get a a handlebar built into a steer tube through the head tube on a bike?
Rules: Folding or jointed bars dont count.

SuperHighBeam (Sep 7, 2021 at 18:32)
@Planetx888: Any more direct and the bars will just mount to the starnut via the top cap...we all know that won't work without modification of the steerer tube (bars would move around too much). I guess you could spline the steerer tube and attach the bars via the top cap. You'd have to have a fairly chunky middle section of the handlebar where it connected to the steerer tube though otherwise the bars would be quite weak at the "stem" section. The spline tabs would have to be pretty chunky too and internal to the steerer tube so that is didn't interfere with the head tube. I'm thinking a press fit internal sleeve could work with 2-3 spline tabs for the bars to engage with leaving just enough space for the top cap bolt to pass through to the starnut. Slits in the top of the steerer tub and precision tabs on the bars could also work. I know your thought was a joke, but this is actually possible.

SuperHighBeam (Sep 7, 2021 at 18:50)
@fuzzhead45: Lol. And the point of that would be? May as well ride a unicycle, second wheel wouldn't help with balance since it isn't connected to the other rigidly. For what its worth I have seen one strange instance of what was essentially two unicycles attached by a bar with one end having the saddle, seatpost, seat tube, seat stays, pedals, and wheel and the other being a combined unit of handlebars, steerer tube, fork, and wheel (so the front and back could turn independently). The handlebars we quite tall I recall so that the rider could maintain an upright riding position. A more sophisticated version of this concept would be the swing bike which you can see in this video www.youtube.com/watch?v=CQyXDd-kPMw

SuperHighBeam (Sep 8, 2021 at 15:19)
@blackthorne: Fork's got to be attached to something. Steve Jobs was all about the user experience and keeping things simple and intuitive. You idea although simple is neither intuitive nor does it enhance the user experience. So who's closer to being Steve Jobs?

SuperHighBeam (Sep 8, 2021 at 15:21)
@fuzzhead45: I like this just because the concept is hilarious. Even better if you just run around with a handlebar with grips on it while pretending to ride a bike.

conoat (Sep 7, 2021 at 11:50)
@blackthorne: they certainly will/did. it's easily different enough from existing designs. as much as I hate the patent system(I truly believe they shouldn't exist at all. full stop), this easily resides in the space of patentable.

aljoburr (Sep 8, 2021 at 8:26)
@conoat: Can just go design registration?
Patents do not even do what they were designed to do, protect original ideas of individuals!

Will762 (Sep 8, 2021 at 9:08)
Right? There is quite literally no difference. A handlebar and stem is a system that clamps to the steerer tube and offers handles to manipulate said steerer tube, from some point in space. But the intermediate physical shapes that define that relationship is totally immaterial. Call it what you want -- "mini-stem", "no stem", "full-handlebar-length-stem" -- there's no difference.

danielfloyd (Sep 7, 2021 at 7:05)
cool, but it presents the same issues that any bar/stem combo presents. No adjustability. With a regular bar/stem setup, you can rotate the bars to find the right angles for your body, and your preference, but with these, you get what you get and that's it. you can adjust the stack height by moving spacers around, but that's about all the variance it offers.

goroncy (Sep 7, 2021 at 7:26)
Still. It is an elegant solution and it makes much more sense than internal cable routing.

pourquois-pas (Sep 7, 2021 at 13:31)
Maybe it would be possible with some sort of toothed cam system, shims... I dunno, someone will figure out a way to have some adjustability in an integrated system.

JosMaple (Sep 8, 2021 at 2:19)
The rating is becoming a requirement for some enduro races @gadabout-garth:

Mac1987 (Sep 8, 2021 at 11:29)
@goroncy: nog sure. Internal cable routing only bothers me once a year when replacing a cable and can be done the right way (with guiding tubes). This has no right way and will bother you indefinitely if the angle isn't right for you.

SprSonik (Sep 8, 2021 at 13:43)
if you know what you ride works and this is lined up accordingly, this is a great option to keep strength while losing nearly 1/2 pound up front. And it looks so clean!!!

Armand74 (Sep 7, 2021 at 8:26)
It has been done (kinda…if you check publication date) : m.pinkbike.com/news/ns-bikes-introduces-radical-new-geometry-for-mountain-bikes-2015.html

mountainsofsussex (Sep 7, 2021 at 8:30)
I probably set my bars once when I buy the bike then forget about it unless it goes in a plane and the bars have to come off, so frankly I like it. But please can I have it in aluminium, with a round section in the middle for Garmin and lights (winter is coming...)?

andwrong (Sep 7, 2021 at 11:27)
Agreed. Heck I'd even take a steel bar from the likes of doombars. Custom heights, widths, all the round section with this cool steerer clamp design.

JosMaple (Sep 8, 2021 at 2:22)
Obviously you can’t adjust it… but your 50mm rise is spot on! Even the pic of the bars shows a stack of spaces - if it’s about weight saving then adding the extra rise to the bars would save spaces and allow a bit more steerer to be cut, that would save some extra grams. Also look better than all those spacers.

iammarkstewart (Sep 7, 2021 at 7:11)
Very cool but for a narrower scope of rider I think. I can't think of ever leaving my SQ Lab 30x 16 degree bar. There's too many variations for too many riders for companies like this to cater to everyone. Still, very cool, and hopefully there's enough market to sustain it.

bman33 (Sep 7, 2021 at 7:48)
Other than top end WC XC weight watchers, I feel the integrated stem/bar combo (regardless of brand) is just trying to solve a problem that doesn't exist or a product no one is really asking for. Why would one give up the ability to fine tune the bar role or to risk having to replace everything in the event of a hard crash or break?

SJP (Sep 7, 2021 at 8:41)
Don't forget the top end WC XC weight watcher wannabes. That is a much bigger market. They may not be able to do the training or the diet or the racing, but they can buy the parts.

BMcP (Sep 7, 2021 at 7:55)
10mm shorter stem can screw up you body position/geo never mind 30-50mm! You can ride more forward on the bike but this could make some bikes fairly unrideable. Now you have to buy frame/bar combo with all your fave geo? Sheesh

But you lose that place to grab your stem with one hand and steer your bike around while you’re walking it!

Phaethon85 (Sep 7, 2021 at 8:06)
Personally I think the Syncros bars look much better than this, and the weight is a bit heavier than a 77 design stem and a lightweight Tune Handlebar. I do like the concept though.

Deadclmbr (Sep 7, 2021 at 8:27)
Handlebars with the word stab in the name. Anyone ever play Road Rash on Sega Genesis?

maxxx (Sep 7, 2021 at 10:49)
Not a terrible option if you're stuck with, or realize your frame front center is too long. Not sure what effect a stem shorter than your fork offset would have on bike handling though.

Beaconbike (Sep 7, 2021 at 18:57)
There are some amazing looking stems out there. I don't see the point of eliminating the stem... other than weight I guess. I'm no weenie though. Why not a dropper with no clamp and a built in saddle? Because you can't fine tune things to feel right. Same with bar/stem in my opinion.

A4S (Sep 7, 2021 at 21:28)
Fortunately it is about 15 gr lighter than the next light downhill-handlebar, so i dont have to Press that hard anymore when being in the toilet to be lighter now, before i Go on my Downhill runs.

Almazing (Sep 7, 2021 at 7:49)
These integrated bar/stem combos are for the person that sets their brake clamp right the edge of the grips.

Andrewcycleaddictstaton (Sep 8, 2021 at 4:41)
DH rated? my sled has a direct mount stem. curious what they mean. the material is as thick as a dh bar, but wont fit on your "foxxer" ?

gonpalco (Sep 8, 2021 at 5:57)
People worried with aestetics and not performance
Adjustability over weight anytime, anywhere and can it be beautiful? That should be your aim...not the way around.

theberminator (Sep 8, 2021 at 6:37)
Oohhh nasty reminds me of the old mondraker days when thay did the nasty short stem thing.

Tigergoosebumps (Sep 7, 2021 at 9:40)
They should rename this bar the Fesserlipinchip chalkwitheringlicktacklefeff Produced in conjunction with the late mad tv.

mccarthyp (Sep 7, 2021 at 11:54)
So no benefits but many disadvantages, such as no adjustability and no option to change stem or bars independently based on changing preferences, use, experience etc.

SuperHighBeam (Sep 7, 2021 at 17:22)
Took long enough, something needed to compete with Syncros bar.