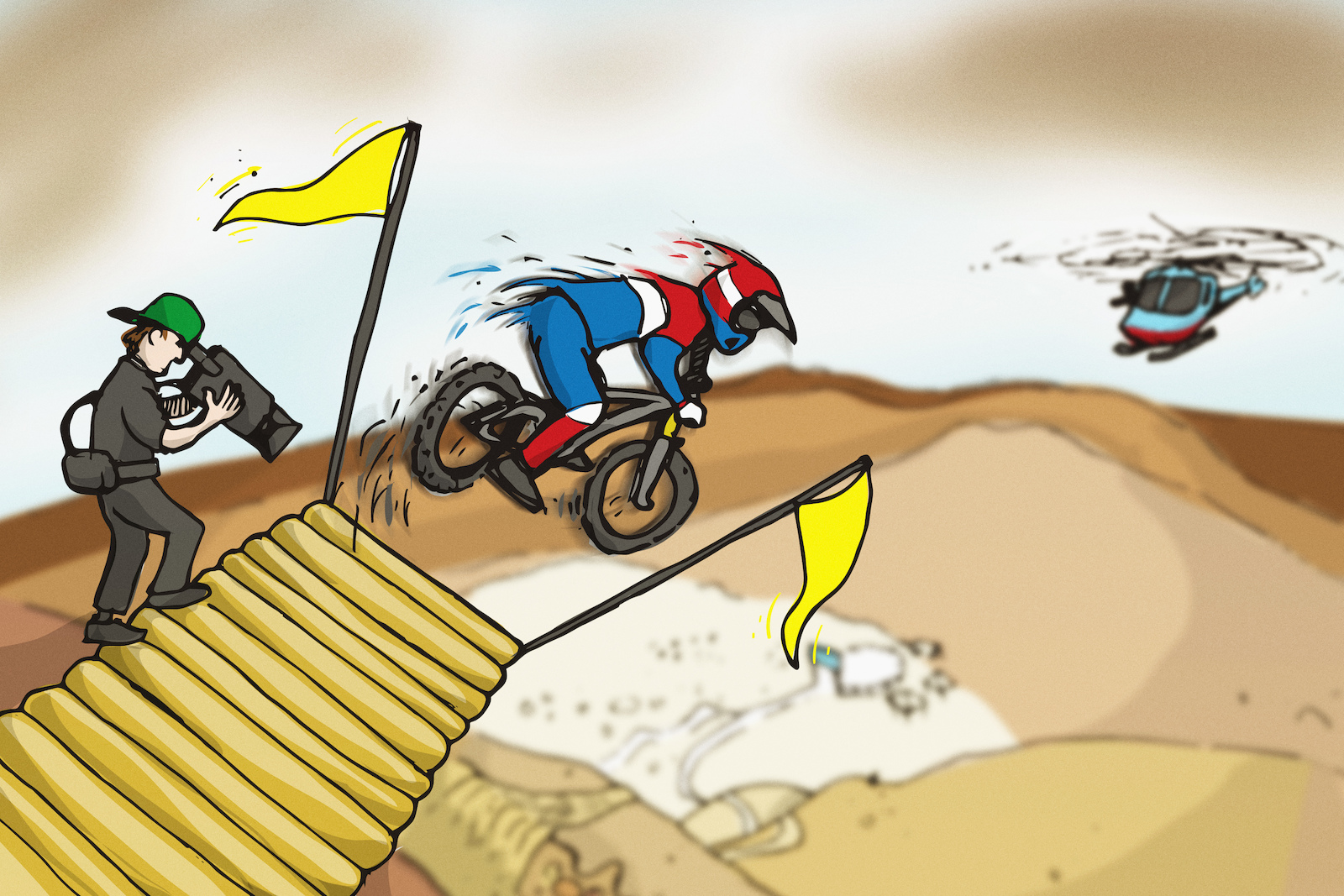 We catch up with The Freerider on the side of a desert mesa, wind howling and helicopter waiting for him to drop in for what could be his last appearance at the world's gnarliest mountain bike competition. It's been a tough few years, but he knows what he has to do...


It's not like The Freerider hasn't been here before, standing over his bike while the flags snapped in the wind like dozens of angry bullwhips. Listening carefully, he swore they were saying, ''You better not go yet,'' which was in direct contrast to the walkie-talkie toting course marshall giving him the thumbs-up like this was no big thing. Really, a thumbs-up? Like it's simply a matter of cruising down to the valley floor, a few thousand feet below this ridiculous inflatable, energy drink-flavored start gate that somehow hadn't been blown off the mesa yet. If it did blow off, he thought for a split second, maybe they'd tell him to not drop-in.

Another cheesy thumbs-up, just in case The Freerider hadn't seen the first three. And that goddamn helicopter. And this goddamn wind. And especially that goddamn step-down that he'd already greased a few times but had yet to spin. It seemed like only last year that he could have won this ridiculous competition by straight airing it. That definitely wasn't last year, and there's no way that'd even make the highlights this time around.

It's been a while since The Freerider was also The Man - maybe six or seven years if he was honest with himself - and things were more complicated these days. Actually, it's just the tricks that were more complicated, and the small fact that they were being done by ''kids,'' The Freerider would say without intending any offense. It's just that to him, a late-thirties, always limping legend, they were literally kids. The Freerider was in complete awe of how the latest wunderkinds could, despite being only a few years older than his own son, seemingly add as many variations as they wanted while in the air. Truth be told, The Freerider couldn't even name half the things these kids were doing, but he did know that his own performance was worth around half the points.

The Freerider was currently scared shitless atop a five-foot-by-five-foot shelf on the side of a crumbling red mesa, but it hadn't always been like this... 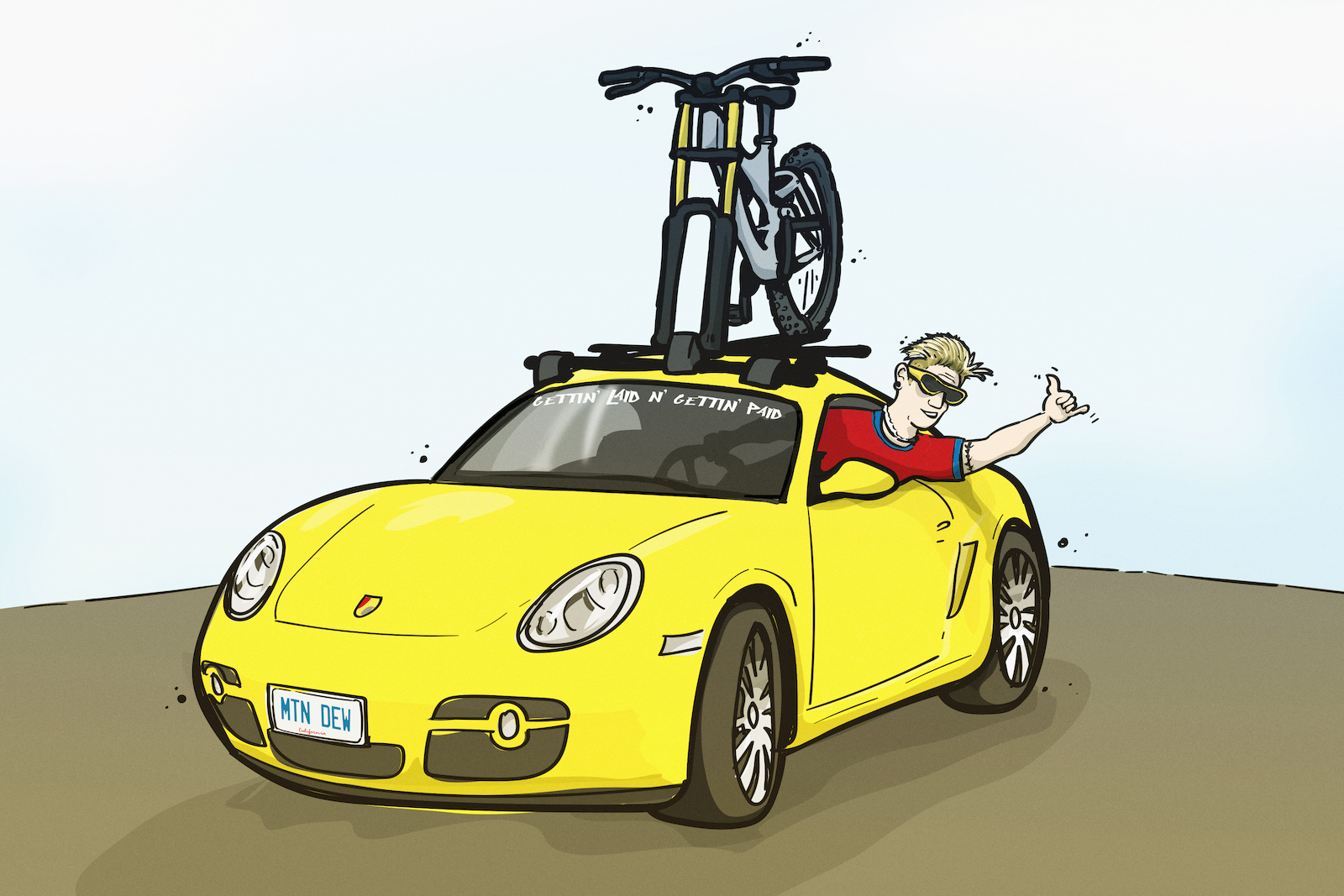 The Man used to employ a simple equation to determine if he was riding well: Amplitude = N, with N being his score. There wasn't anything else he needed to know or do, besides maybe getting a bit sideways or, if the lip was just right, remove his hands or feet before rushing to get them back on. In his glory days, going huge and going first made him The Man. Sure, Linda wouldn't let The Man have blonde highlights anymore, but he swore that it was just a year or two ago that he was spending most of his strangely large paychecks on gutter glitter and mid-range sports cars.

It was more like a decade ago. And fine, a used Porsche Cayman isn't exactly major league, but The Man could afford his own house and property - full of jumps, of course - by the time he was in his early twenties when he met Linda, his wife. The injuries had already been stacking up by that point, but so had the money; The Man was earning well into the six figures back in the early 2000s, and traveled the world on other people's dime to do something he loved: Party his brains out. As an added bonus, he even got to ride his bike in some amazing places.

He eventually lost track of how many magazine covers he was on, but most of them are still up on his garage wall. They'd be in the bedroom, too, if f*cking Linda would let him. The Man eventually sold the Porsche and bought a four-door truck for his growing family. Then, in what was clearly a subconscious I'm-not-ready response to the incoming second child, he lifted it so high off the ground that no one in his family could get into it.

The Man could have "retired" a few years ago to a marketing gig that he would have been terrible at, but things had been looking up. His knees were finally fixed-ish, and the shoulder hadn't popped out for months. On top of that, he had re-signed with his long-term bike sponsor. Sure, his paychecks went from six-digits to "You can sell the bikes when you're done with them,'' but all The Man had to do was spin that goddamn step-down to show everyone that he was still, you know, The Man, and not just some nearly-forty-year-old freerider. 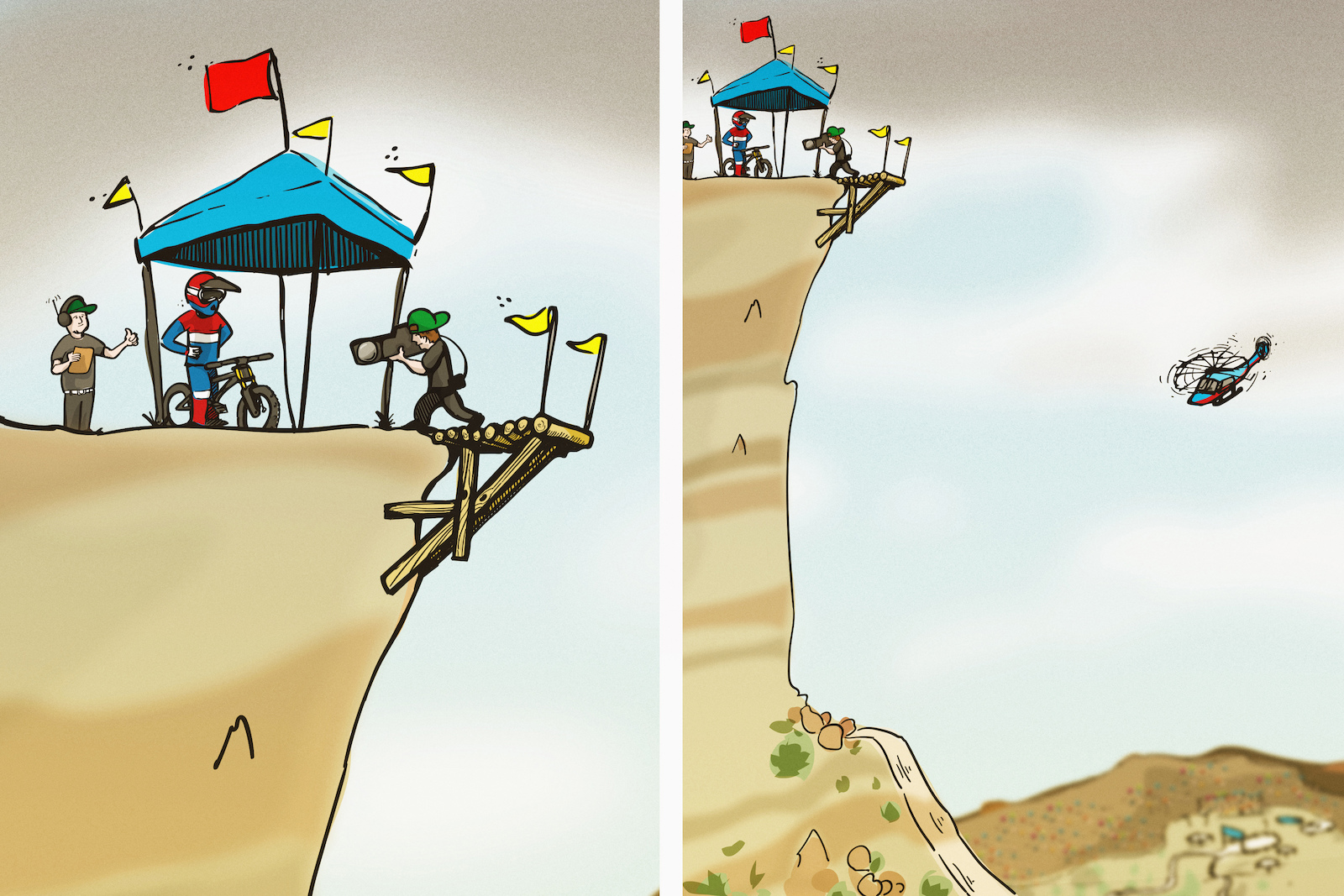 The Freerider doesn't regret selling that bright yellow Porsche but, perched high up on the side of a desert cliff, the only thing outweighing his fear is the regret he has for not taking that marketing job.

But The Man has been here many times before; helicopter at eye-level, what felt like 40mph winds, and a live feed streaming the metaphorical size of his cajones around the globe. The Freerider might not have highlights or an eyebrow ring anymore, and he might be in his late-thirties with one kid and another on the way, but The Man still has the biggest of cajones.

The wind dies, just like he knew it would, and The Man gives the cameras a thumbs up as he rolls into his line.


The sport has evolved since he was The Man, and he knows that amplitude doesn't out-score the incredibly complicated tricks being done by his competitors... Unless he takes it even further. Stay tuned for the next installment of The Freerider to find out what happens.


Posted In:
Stories The Freerider

nzandyb (Aug 21, 2020 at 15:08)
You can't build a house without a foundation. For all you guys who were there at the beginning, blazing the path, giving kids something to aspire to: you are, and always will be legends, and when it comes time that the younger generation is faster, or more stylish, or smoother, we'll always remember that the younger generation stands on the shoulders of giants.

MorningCoffey (Aug 21, 2020 at 21:39)
Dude exactly well said respect to the ones whom paved the way! Really loved the crankworx recaps last weekend. The most hyped I've been to ride

@mikelevy - I think there should be a Movies for your Monday solely devoted to the likes of the older generation video snippets.

Extracts from the likes of NWD, Sprung, Drop In TV etc. Something to educate the younger generation on where the spot has come from. Oh and also educate them on what good music was

yishuai (Aug 21, 2020 at 22:01)
@jlawie: @mikelevy What he said! That Mt.7 Psychosis video from the early days of pinkbike with Mötley Crüe's Kickstart my Heart as the soundtrack...watched it so many times it's etched to my brain. I literally visualise the footage (Helicopter & all) everytime I hear that song. There's another BC road trip video too that was rad...with a groovy soundtrack...can't recall exactly...please help me out!

bikindad (Aug 22, 2020 at 5:01)
As a dad of a few groms as described.....we said! Rather them choose giants, speed & style over some of the antics other sports industry "giants" are portrayed these days.

trailbuilder (Aug 21, 2020 at 15:09)
Levy did you really write my biography without my authorization? Hope you left the real cripy parts out of your manuscript or else you'll hear from my lawyers.


Seriously - I love this kind of fictional stuff - Very refreshing.

MTB culture has sometimes been lacking in panache & imagination these last few years...

Please make more space for this kind of content in Pinkbike.

Always fun to do something different!

artistformlyknowasdan (Aug 21, 2020 at 19:43)
@mikelevy: would love to see more of story driven stuff like this. Reviews are nice and all but they never invoke that emotional tug that motives u to get out and ride like these narratives do.

FYI - it was a little Audi I had, not a Porsche

subwaypanda (Aug 22, 2020 at 3:08)
@mikelevy: for someone who seems to take a cavalier, almost abstract, approach to pronouncing words on the podcast you sure do write real good. This is excellent, more please.

mikelevy Mod Plus (Aug 22, 2020 at 7:52)
@subwaypanda: Abstract approach haha! I’ve never been great with pronunciation. I think it sounds like I’m joking but that’s just they way they come out

bemorestoked (Aug 21, 2020 at 15:16)
This style of writing has been the only thing I've been missing on PB. Thanks for entertaining and making me want to write better!

"...he eyed the 3-inch step down from that marked the start of the blue trail and gritted his teeth. He could have taken the red trail, but why would he want to catch fire, explode and die in a ditch..."

brokemywristbyfallingoffmybike (Aug 21, 2020 at 18:14)
Now THIS is some good writing! Love the style, 3rd person view, and I love IT! Congratulations Mr. Levy, this is THE best piece of writing I have seen so far on Pinkbike. This website needs more emotionally invested pieces, and you have just delivered a smash hit of a prologue. The imagery is one of the things that makes this piece stand out, something that writers on this website seem afraid of using, but you have hit a darn good spot, and I don't think you're going to have ANY problems with getting and keeping readers.

flaviotsutsui (Aug 22, 2020 at 5:32)
I’ll never forget Wade Simmons jumping over the Marzocchi truck. That was the bike starting point of my life.

GnarAZ (Aug 22, 2020 at 13:33)
May be biased by its association with my bike-riding, tail-chasing, dog days of youth, but I’d reckon that to remain one of the most iconic pictures in MTB history!

DarkDiggler (Aug 22, 2020 at 0:05)
That was awesome. Needs to made into a short film.... I love that it was illustrated by someone who was a true pioneer themselves, part of a solid foundation on which so many now stand and build on. My glass is raised.

GnarAZ (Aug 22, 2020 at 13:35)
I am literally picturing Cam Zink when reading this. Complete with the (albeit brand new 911) Porsche and shoulder injuries.

Geochemistry (Aug 21, 2020 at 18:23)
Let me know when you want the perspective of the Freerider at 60. Realizing the pain was too much to continue the effort, the surgeries too much for the bank account, and that the joy of riding and having fun doesn't depend on air time. The joy of riding is still riding, and the fun of life is Linda and the three kids all out of college and making a good life of their own.

MKYSHRP (Aug 21, 2020 at 20:49)
I heard at one point in the late 90's when the freerider was still a grom, he happened across a Taj Mehelich video part and invented the word amplitude in his brain right there in the moment. Giant. Still under your influence.

bretttippie Plus (Aug 24, 2020 at 7:47)
This is awesome Mike! Doing early freeride movies and Rampages was definitely a trip and watching several generations of new free riders appear on the scene has been humbling and inspiring. Respect to all the old school and new school...and the bus drivers...giving er on their bikes! Look forward to more!!

b-miscreant (Aug 21, 2020 at 19:02)
Fantastic writing Mike, looking forward to more like this. Very relatable and not just in the biking industry.

chakaping (Aug 23, 2020 at 9:34)
Very well executed @mikelevy and Taj.
Do you need anyone to represent you for the TV rights? This would be a good fit for Netflix.

mikelevy Mod Plus (Aug 21, 2020 at 16:05)
Definitely an amalgam of many from the previous generation - things seemed bigger than, even if they weren't haha

mikelevy Mod Plus (Aug 22, 2020 at 14:18)
I mean, I did spend the 90s and early 2000s falling off of skinnies and doing stupid wheelie drops on a Norco VPS while wearing Roach pads every day, but whatev
Post a Comment