The Freerider, Part 2 - The Legend's Return 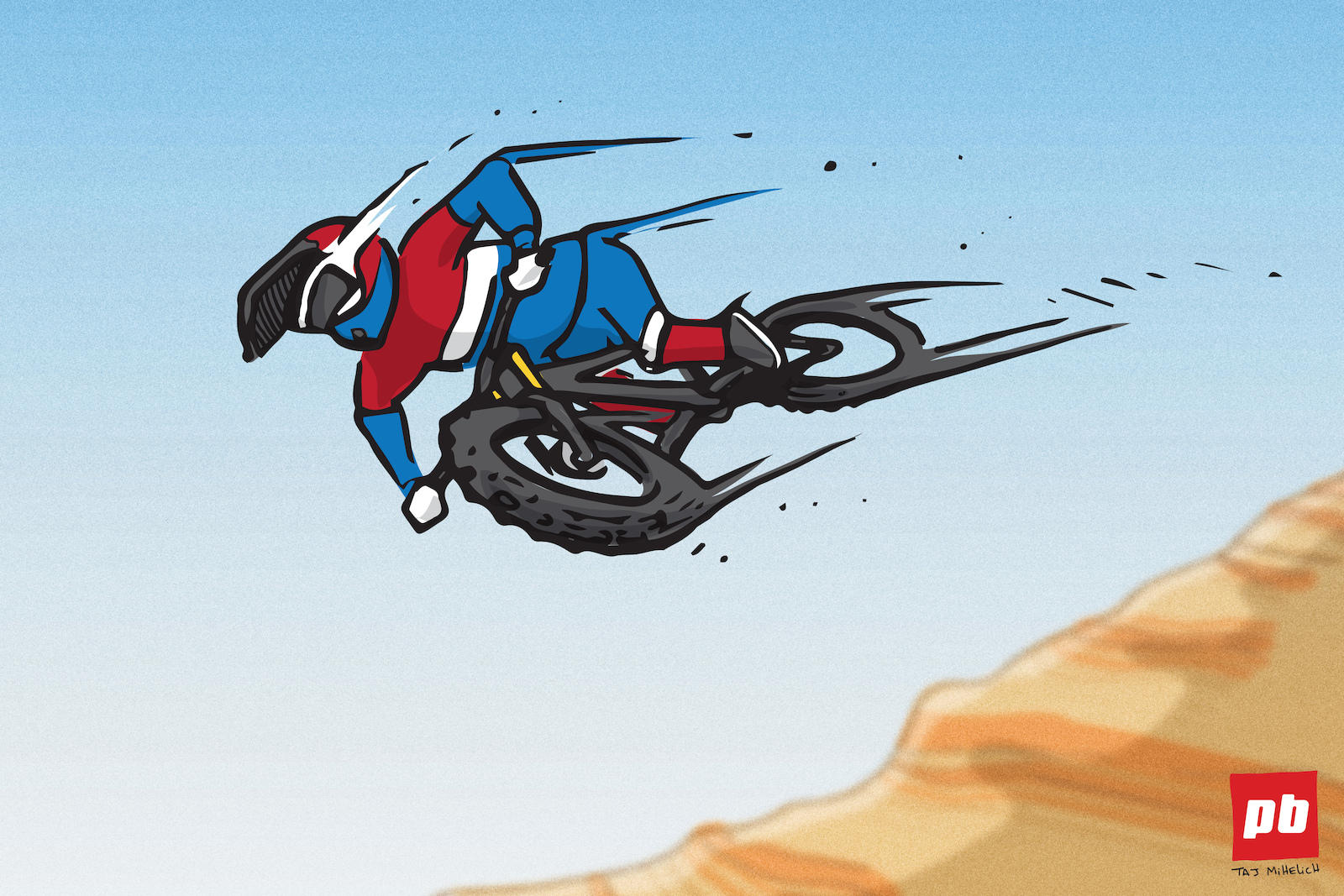 We last saw The Freerider moments before he rolled into his final Red Bull Rampage run, wind howling over the mesas and covering everything in a sandy red mist. The live stream had been on a weather-hold for the last ten minutes while The Freerider waited to drop in and 360 a massive step-down that every other competitor shrugged off as no big thing...


You'd be surprised by how slow a 40-pound downhill bike is willing to spin. Or maybe you wouldn't, in which case you might know what The Freerider was thinking as the ground rushed up towards him. ''I'm going to die,'' he thought calmly. ''AHHHHHHHHHH,'' came a high-pitched shriek that was anything but.

Only, it was already over and he was more embarrassed by his mid-flight screams than he was hurt. Instead of a bone-shattering impact, the four-foot-deep foam pit he was currently at the bottom of meant there wasn't a scratch on him. It also muted the sounds of The Freerider swearing at himself. Partly for over-reacting. Mostly for knowing that if he couldn't nail it here, he probably shouldn't attempt it off a 50-foot Utah cliff in a few months.

And for some reason, the thirteen-year-old kid filming his unsuccessful spins made The Freerider far more anxious than a Red Bull-colored helicopter hovering just above his life-endangering decisions in the desert.

The problem: He'd spent the last couple decades simply hoping to land huge jumps and drops, usually doing his best to fly straight as a matter of survival. ''And now I need to do BMX tricks,'' he steamed from deep within his foam prison.

Having won the world's scariest freeride competition multiple times in the past, back when he was The Man, didn't exactly help. Knowing that he couldn't do it again only made him angrier.

The judges had spent the last five Rampage events reminding him of exactly that. It was as if they didn't see the difficulty and consequences of the fall-line routes he carved into the dehydrated red mesas every October. And no one noticed that while the unforgiving terrain forced most competitors to share large sections of the course, every single rider gave The Freerider's plumb-bob and cliff-side hack-jobs a wide berth. 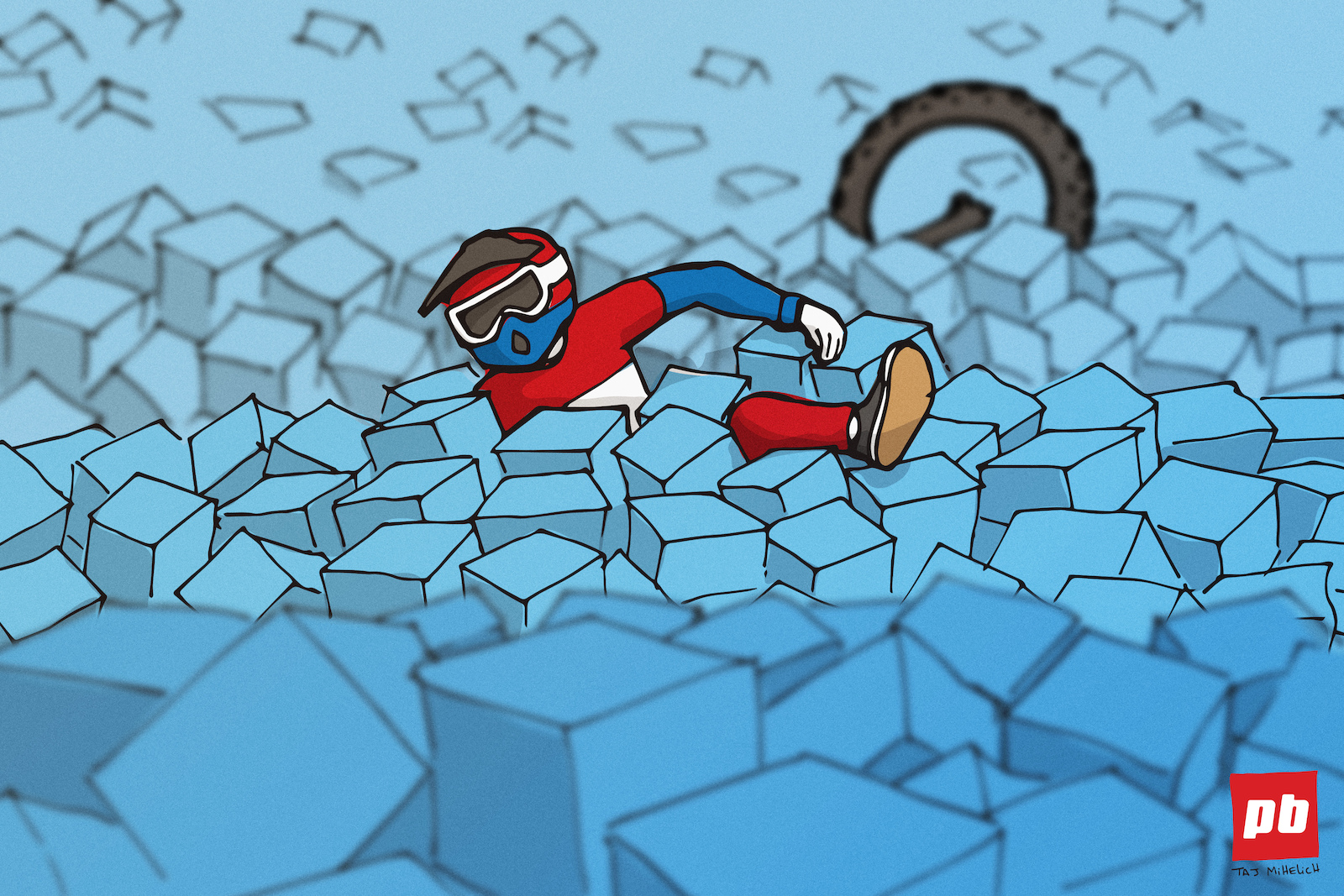 But none of that mattered now, not while The Freerider couldn't even spin his bike into a pile of foam. And certainly not considering he had said ''Winning means spinning, and I can win Rampage again,'' to anyone and everyone that would listen after last year's dismal showing.

Sitting on the side of the foam pit with his sore back, The Freerider watched riders one-third his age shoot into the air before spinning around like tiny, wheeled gymnasts.

''What the hell am I even doing here?'' he asked himself.

Two months later and The Freerider is standing on his five-foot patch of wind-swept red dirt, a few thousand feet of life-threatening terrain between him and the flat valley floor.

None of this was new to The Man, though; not the helicopter, not the cliffs, and certainly not the pressure. Neither was the unconscious shift in The Man's brain that rendered the chippy course marshall and his thumbs-up completely invisible.

The only thing The Man saw were the flags fall limp as the hot desert wind died.

Letting go of the brakes, The Man pointed himself down impossibly steep lines that were more cliff than trail. The precision and skill required to stay on course were lost to the camera and the judges, but everyone knew he couldn't help himself. And besides, everyone also knew that The Freerider was only invited to Rampage again as a courtesy, a nod to one of the OG legends of our sport. 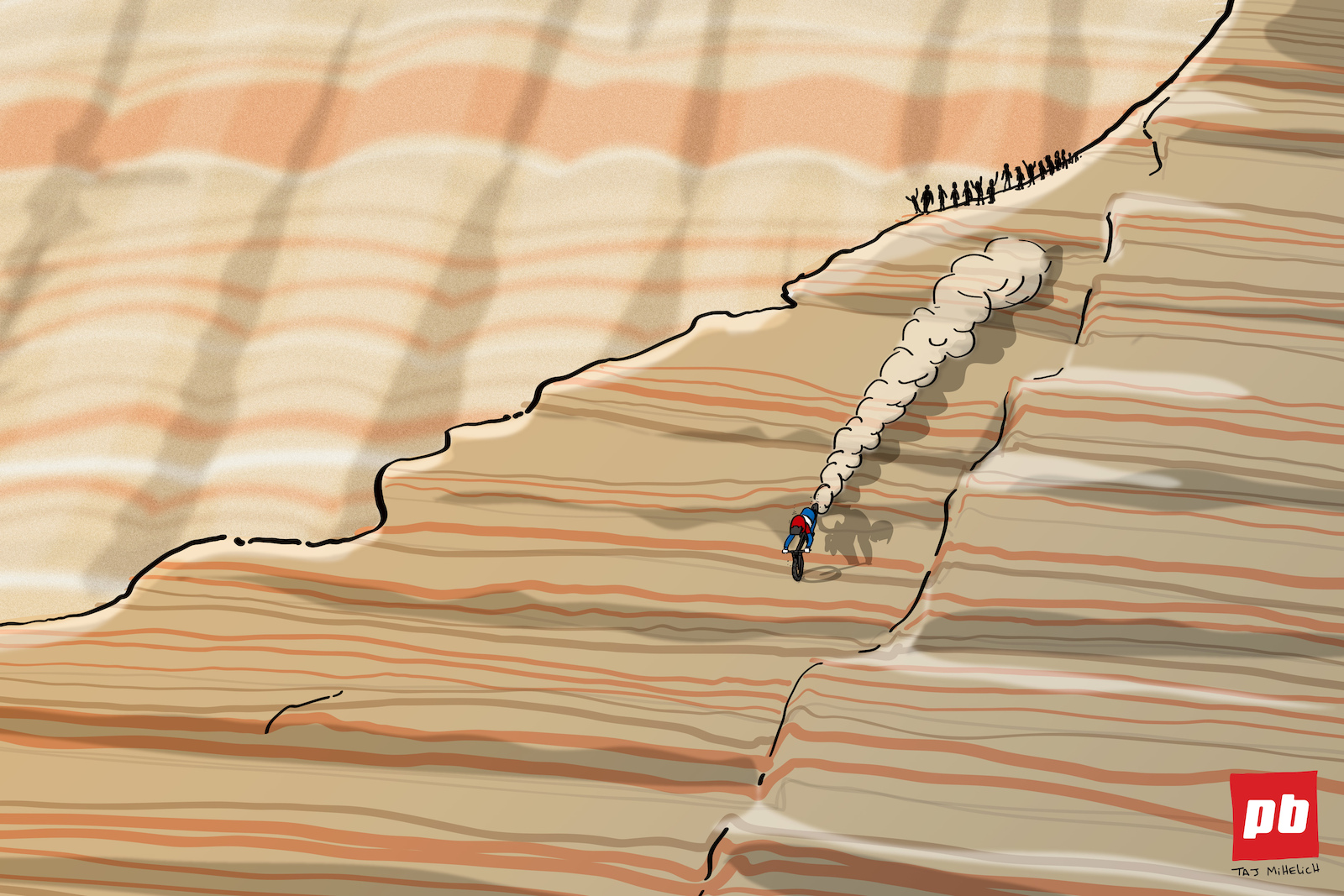 While nobody seemed interested in The Freerider's janky route to the big step-down that every competitor was tricking, all eyes were trained on him as he neared the glass-smooth roll-in above the lip.

And then, in a unison realization, the crowd and those watching live from home knew that The Freerider had too much speed. Way too much. The other riders had been coasting the hundred-foot roll-in before spinning or flipping to the groomed landing fifty-feet out and fifty-feet below.

But The Freerider was sprinting as hard as he could towards the same lip, on the pedals, head down, and seemingly oblivious that he had four times the speed he needed.

To The Man, commitment was as simple as making a decision. The Man liked simple, and The Man had made a decision.

We've all been there, from the nervous beginner rolling into their first anything, to the top World Cup downhillers eyeing up a mind-bending gap that only two or three of the most skilled will attempt. Your practice runs are done - there's no use in doing another, but you will anyway - and now there's nothing left to do but make a decision. A few buddies are probably watching, and I bet one or all of them have already greased whatever has you shaking in your chamois. One of them is probably filming, too.

Sitting on your bike above them and it, there's always that moment when have to decide to either 'No' or 'Go.' After that, there's no changing your intentions; you're either over it or charging towards it. If it's one of those serious, consequential moves that makes you more than nervous, it can put you into a tunnel-like focus that's near uninterruptible.

The difference between The Man and almost everyone else? ''I dunno,'' he'd say, ''I just don't get nervous,'' then add a shrug that made it clear he didn't understand either. It also helped that Rampage's dusty mesas had felt like home to him since his first visit here long before helicopters and live streams. Oh, and there's that simple equation The Man lived by; Amplitude = N, with N being his score.

Video from that day shows The Man hit the take-off ramp at nearly 80kph and still gaining elevation, rock steady and level, as he passed over the glass-smooth landing that was shrinking far below him. And then the perfect tweak against the blue sky as he sailed out of view; bar turned slightly to the left, bike leaned slightly to the right, just like on all those magazine covers from the previous two decades

People on-site said it felt like the desert air had been sucked out of their lungs the instant The Man left the lip. Most thought they were watching a worst-case scenario. No one except Linda, The Man's wife, knew his plans. No one had noticed the two of them raking clear a landing slope that appeared to be hundreds of feet outside the marked course. 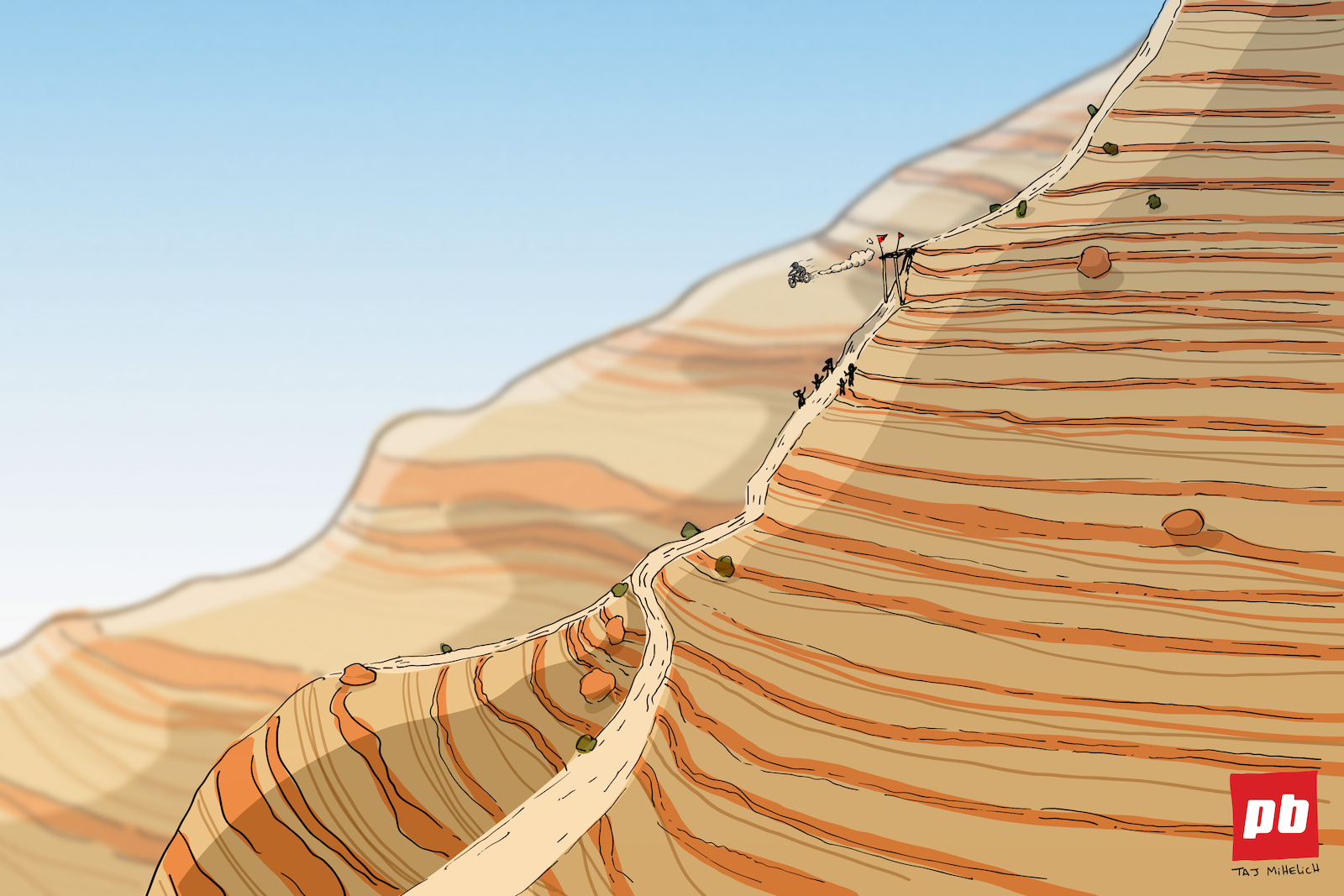 His rear tire touched down first, only a few feet from the top of the long landing, but he was already at the bottom of it before his front tire hit red dirt. No one could have held on, of course, and the ensuing crash was nearly as long as the two-hundred-foot gap The Man had just cleared. The only one with a clear view of the entire jump was Linda, who filmed the whole thing, including The Man slowly rising to his feet, covered in red dust, missing a single shoe, and lifting both arms high above his head while calmly limping towards his bike.

''I just needed to go as fast as I could and hold on,'' he told reporters from his hospital bed a few hours later, ''So calculating the speed was the easy part.''

DroppingThreeTwoOne (Mar 22, 2021 at 10:29)
and force them to ride electronic motor bikes and take Zoloft

BenTheSwabian (Mar 22, 2021 at 10:52)
Commercialisation ruins everything. As soon as the mainstream becomes interested, it's over. I remember a time before sponsored "influencers" and other social media clowns. Even before social media in general. Man what a glorious time that was. It was so much nicer in the way that people actually did stuff just for fun and didn't feel like they have to push the digital documentation of their activities into everybody elses faces.

DimitarDimitrov (Mar 24, 2021 at 7:39)
@BenTheSwabian: Ay bro, coudn't say it better myself.And the childish behavior of the biking youtubers too.

ReformedRoadie (Mar 22, 2021 at 9:19)
I like to think Levy locked himself away in a cabin somewhere in remote BC, with only his dogs and sasquatch for company and hammered this out over a 36 hour bender fueled by bubble tea and Tim Hortons.

imnotdanny (Mar 22, 2021 at 9:52)
Could there please be more articles, and fewer videos? It's a lot easier to read articles while I'm in zoom classes than it is to watch videos.

DoubleCrownAddict (Mar 22, 2021 at 8:37)
In my mind I was imagining this was the 2020 Rampage we missed out on, and a more competitively successful version Bender was making a comeback. Fun reading.

RayDolor (Mar 22, 2021 at 14:36)
While I was reading this I fantasizing an ending like in Castaneda's books, where Don Juan steps off a high sheer cliff, and vanishes long before he hits the bottom. Only to turn up a week later, fit as a fiddle. This was a great story. Encore!

BenPea (Mar 22, 2021 at 10:08)
L Mike, this almost makes up for the climb switch vendetta. You can have that title for your book. Loving your literary spaffings .

pourquois-pas (Mar 22, 2021 at 14:09)
The banner graphic would be a badass addition to the Taj/PB collaboration

odbrider (Mar 24, 2021 at 6:07)
Great read and illustrations.... those OG’s don’t have to worry about commercialism because they will do this as long as they can with their buddies and a case of beer far from the maddening crowds... it’s in their blood .

And why is everything glass-smooth?
Below threshold threads are hidden

dizIzib (Mar 22, 2021 at 9:29)
@Supergirl56: Your strategy is wrong IMO. You can get more downvotes if you give a dumbass reply to a comment, while not many are checking the below threshold threads.