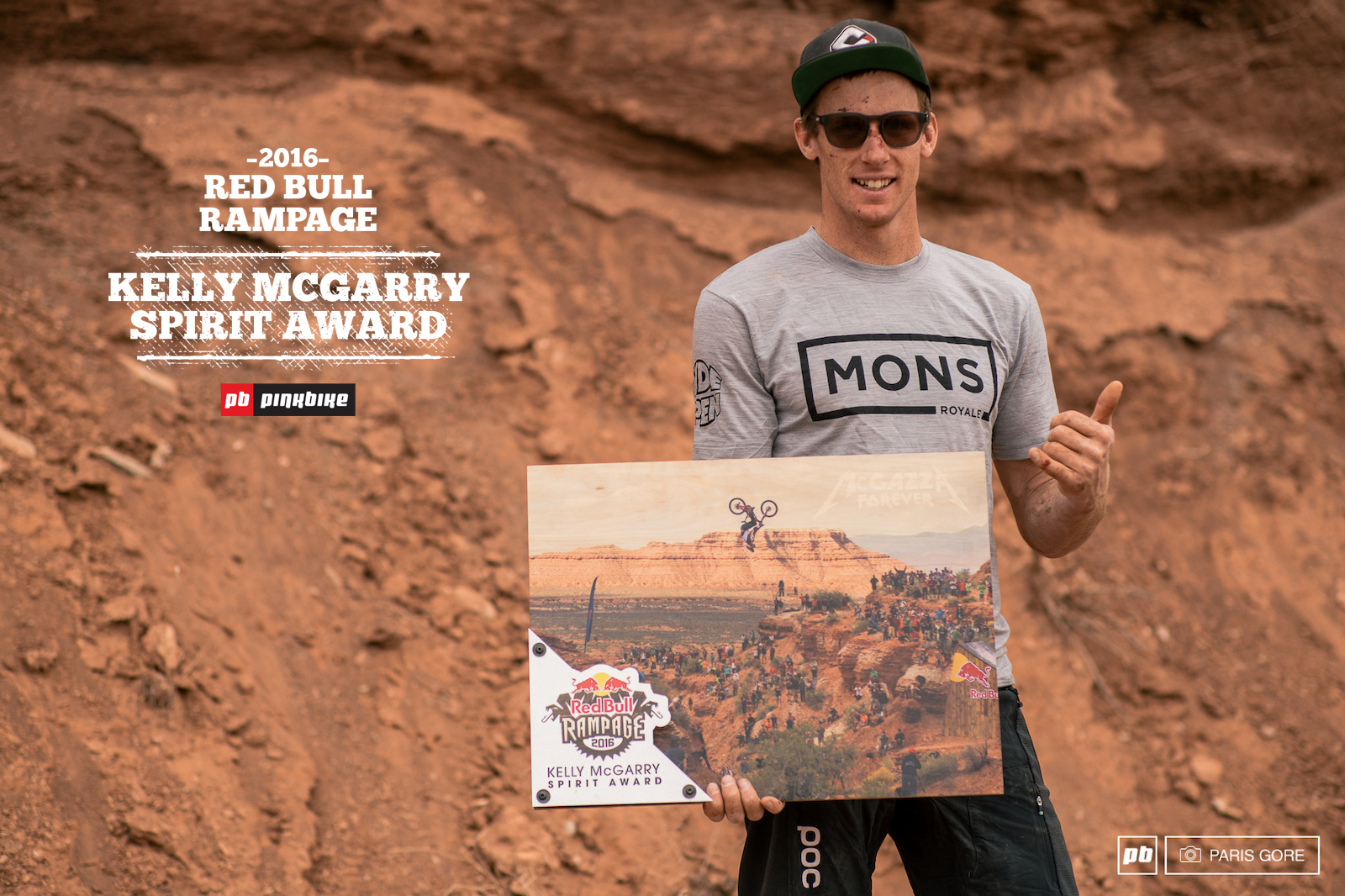 When Sam Hitchcock and Eric Porter approached Todd Barber about having an award at Rampage in Kelly’s honour, they originally planned to give away his famous blue Astro van. When that didn’t come to fruition, the idea evolved and the Kelly McGarry Spirit Award was born.

“We thought that after all the fighting and bickering and everything that Kelly wanted no part of last year, that it would be cool to give out an award based on good character,” explained Eric Porter. Then with a cheeky grin he shared, “I proposed to call it the 'GC' award - you know, 'good character,' right?”

The idea was to honour someone who truly embodied Kelly’s spirit of loving everyone, always being positive, and never giving up. To further strengthen the bond between the riders this year, the award was voted on solely by the athletes. 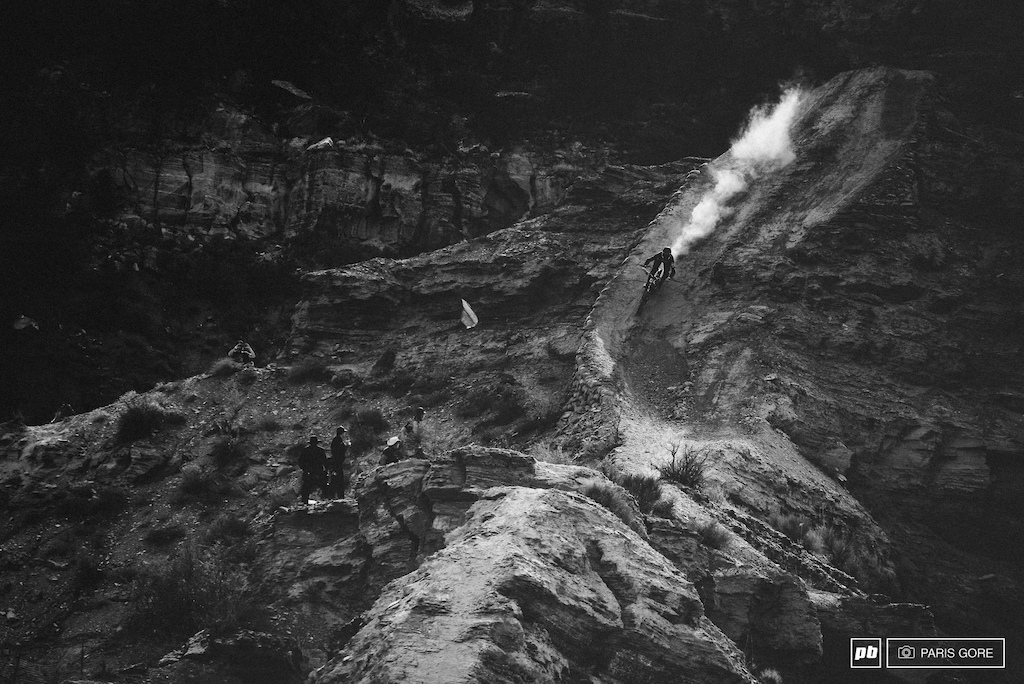 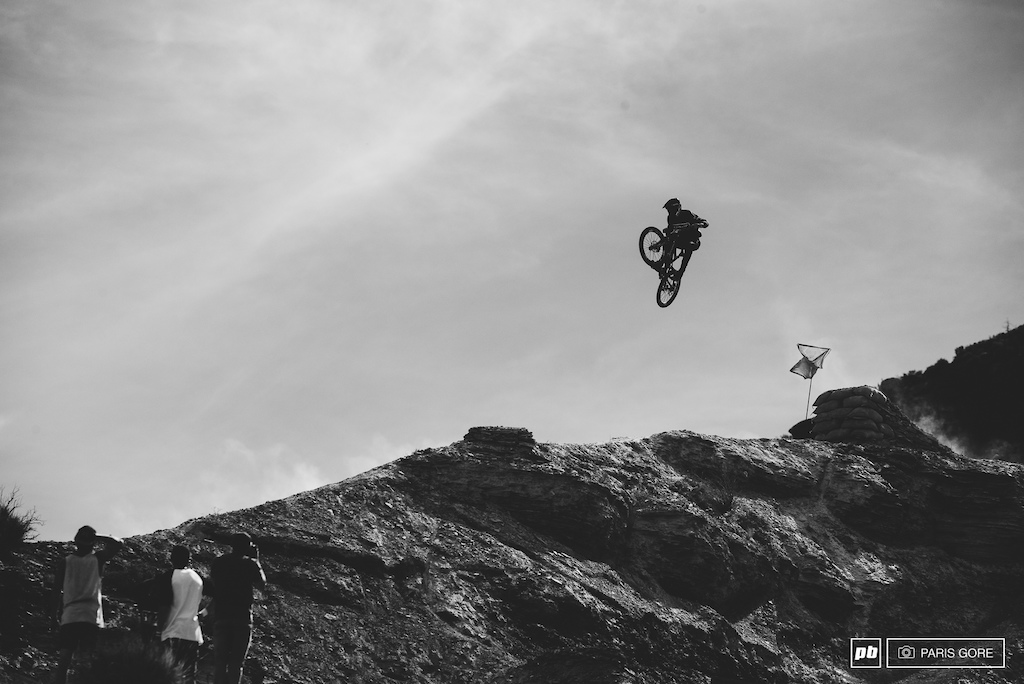 Conor McFarlane boosting off the top ridge and what looked like a killer run.
“We almost just gave it to everybody, we were almost going to produce twenty-one, I'm not kidding you!” Todd Barber was thrilled to see that all the athletes this year took a page from Kelly’s book; working together, supporting each other, and avoiding any of the drama that plagued last year’s competition. “All the athletes voted on it and across the board everyone was voting for everyone else and then at the end we got some that put Conor over the top.”

On hand to present the award was Kelly’s brother, Matt. “Conor had some pretty hard crashes in the last three days and he got up and kept on riding. He’s covered in blood and his elbows are bleeding; just like Kelly” Matt was proud to present the award to a fellow Kiwi to boot, “It’s great that they did that for Kelly, everyone just did so much, and it’s really awesome that another Kiwi won it, and it's someone who Kelly knew well.” 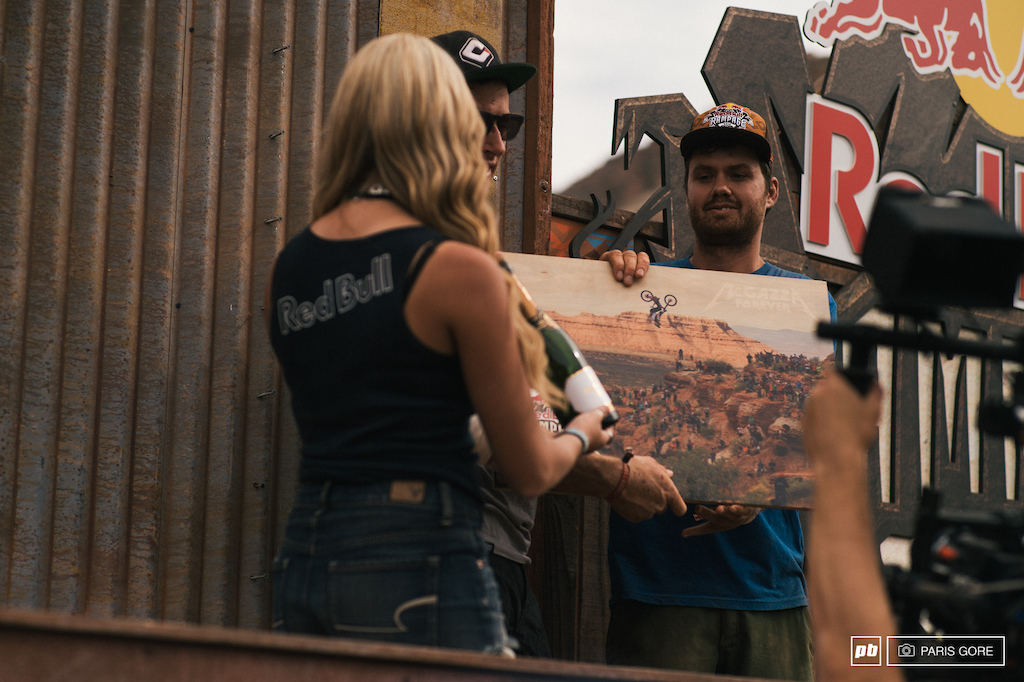 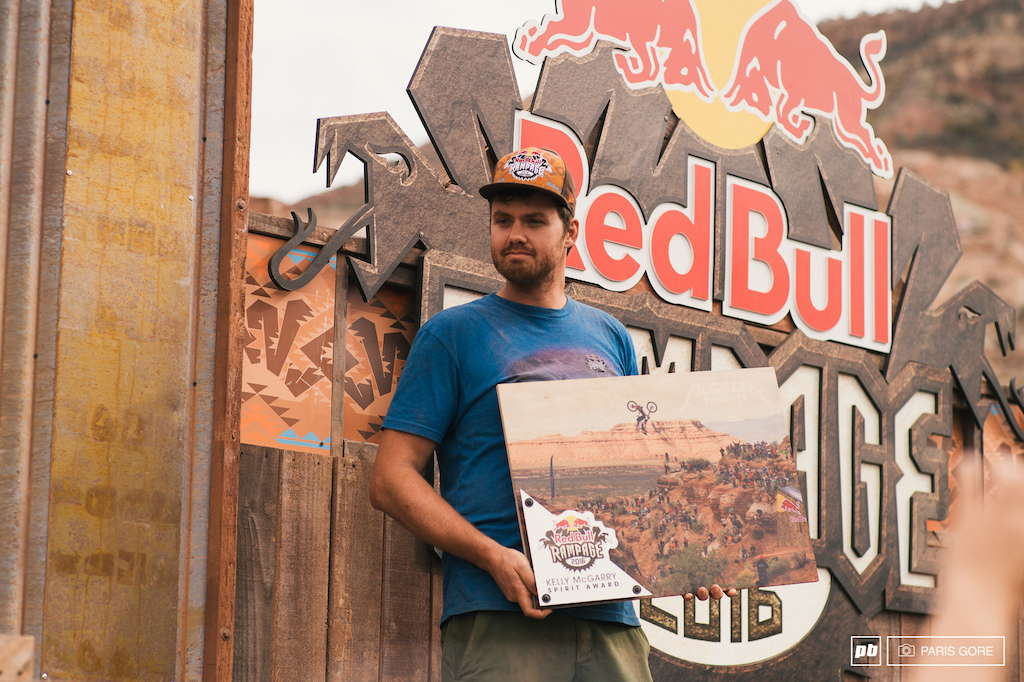 It might just be something about that Kiwi spirit that reminded us all so much of Kelly, as Conor’s girlfriend, Rebecca, will tell you – “they’re too stubborn for their own good, it’s the Kiwi mentality as well; to just keep going. But maybe they should stop when their girlfriends tell them to!” She admits that it was hard to watch, but she also holds a lot of pride for how stubborn Conor is, “you just keep calm and take it easy, and take it as it comes, when it comes. I didn’t actually watch, I was walking up and down [out of view] and I had just walked back up and I heard his name and then I saw him crash.”


Carson Storch, who took the third place podium and best trick award, was someone who knew Kelly well. Kelly was his teammate, mentor, and friend – and Carson competed in finals with a ‘McGazza Forever’ emblem across the back of his jersey. “I think MacFarlane definitely earned it, he got his ass kicked this whole entire time and was definitely in warrior mode, and he pulled through. He didn’t leave anything unturned; he did everything he possibly could to get down. Obviously he’s a good enough rider to get down and kill it, but he was so beat up from the first day of practice that he had to just push through the pain and struggle the whole way through and he did it. He’s definitely really badass, and it’s definitely really respectable. And it’s definitely McGazza-esque.” 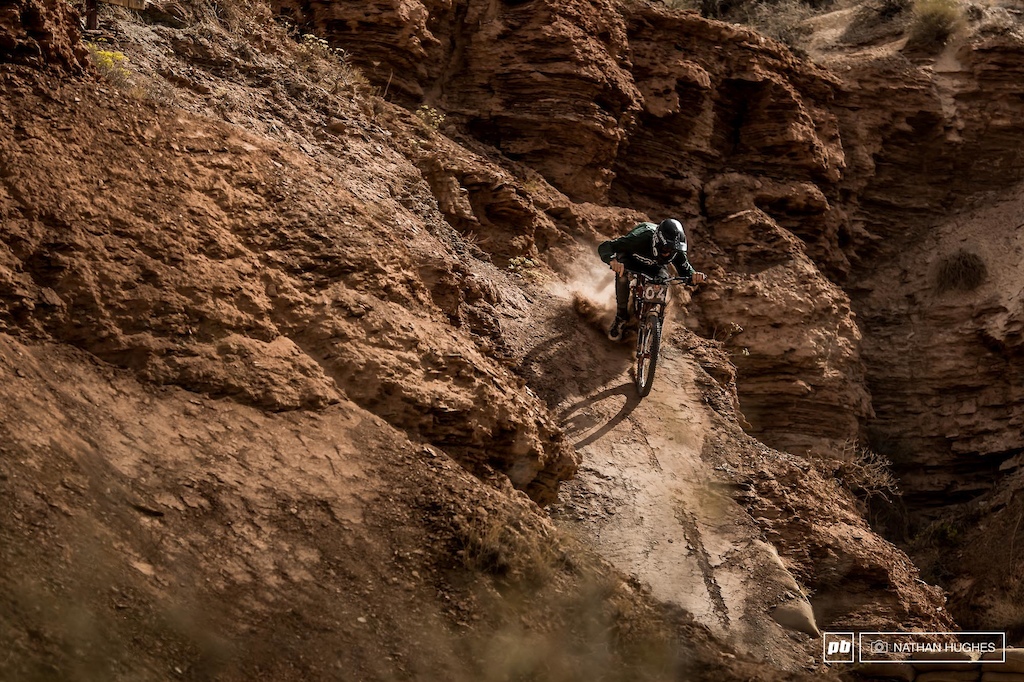 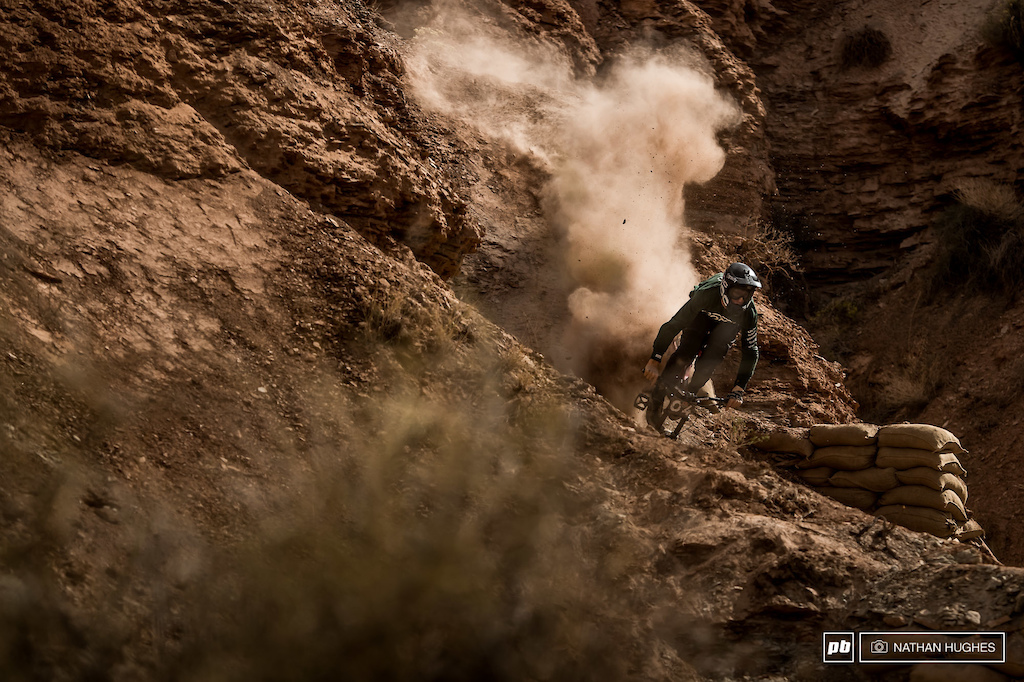 Conor was caught off-guard when his name was announced leaving a pause as it sunk it and he finally made his way to the stage.“I wasn't expecting it at all and I'm definitely pretty proud to be able to bring it back to Queentown where, obviously, the core group of his friends are,” says Conor holding the award with his bandaged hand and wavering a little with a sore knee. “Kelly was the nicest guy ever, so I don't know - I definitely feel quite lucky to be picked.”

jeffhall124 (Oct 15, 2016 at 11:27)
Way to go Conor! That award is a win in my book. The determination and push you have is admirable. Kelly would be proud, and knows you deserve to walk away with something in his memory!

devanish (Oct 16, 2016 at 9:48)
@Gilmarques: That being said I would also say Cam Mccaul is starting to shine as a sports commentator for mountain biking, which is great as I really miss watching him preform. Good work Cam.

Gilmarques (Oct 16, 2016 at 16:41)
@devanish: no doubt man, also miss to see him on the other side, but truth must be said.. he also has some commentator skills ! And it´s damn great to have a rider as a commentator, he actually gives us some useful information about riders, sponsors, bikes... not like the old stupid ass commentators that knew nothing about this sport... No doubt Cam deserves a cookie

fecalmaster (Oct 18, 2016 at 17:37)
Awesome award to give some semblance to our fallen brethren. Hopefully this trend continues.

powturn (Oct 15, 2016 at 13:23)
*HUGE* props to McFarlane & especially the Red Bull Organizers for using their heads to put the heart & spirit of community back in this event. Kelly, if you're looking down right now, say hi to my peeps up above!

tamallama (Oct 15, 2016 at 11:57)
Conor totally deserved it, what a beast. Glad he ended the day without any broken bones. Still brings a tear to my eye to think that such a big awesome guy like Kelly is gone.

petemc (Oct 15, 2016 at 13:17)
Thanks to those guys who did the flag-might have to copy that idea for our next event at Kelly"s old stomping ground Wynyard Jump Park in december

jason475 (Oct 15, 2016 at 16:13)
You know, some of the awards given out at Rampage... you dont see that too often in other sports. Its called BROTHERHOOD. military, police, fire...we know it well. Awesome to see it at Rampage. Not many events are truly a matter of life and death. Good to see the riders and all the support staff lookibg out for eachother. Thats rare in sports. Brotherhood.

Tomahawk990 (Oct 16, 2016 at 21:45)
Nicely done, Conner. You took some heavy hits this week that would have made many riders back off. We got to see a glimpse of you up top for the second run. Battered, eye taped up, the wind blowing and you dropped in anyway. You showed us courage today. I think Kelly would agree that you earned his award. Cheers.

mike-nell (Oct 17, 2016 at 13:06)
I feel like in today's world, where we are starting to see and understand the devastating and traumatic effects of CTE (en.wikipedia.org/wiki/Chronic_traumatic_encephalopathy) in all action sports, handing this award to someone who, by all rights, probably shouldn't have gone up for his last run is proof of a failure of RedBull as event organizer.

I understand that Connor is tough and wants to push and deliver the best show possible, but in the end that's all this is...a show. These athletes are risking their lives every time they get on their bike on a course like this, and they accept that risk. But after Connor's "third or fourth massive crash of the week", I think RedBull should have had the courage to step in and keep him off the start line. Just watch his last run and tell me he wasn't at least slightly concussed - that last run should not have been allowed to happen. His determination, drive, and spirit should definitely be celebrated, but at some point the event coordinator needs to have the athlete's well-being as a priority.

I hope Connor is okay, and I'm sure he will tell you he's fine today, but who knows what will happen 20 years from now. I'm sure Dave Mirra would have said he was fine too...

I just hope RedBull doesn't end up killing someone in the name of selling more energy drinks...

wypler (Oct 19, 2016 at 23:23)
Check McGarryFoundation.com in about 2 weeks. Otherwise go to the Sensus website www.thesensus.com/streetwear/mcgazza-memorial-t-shirt