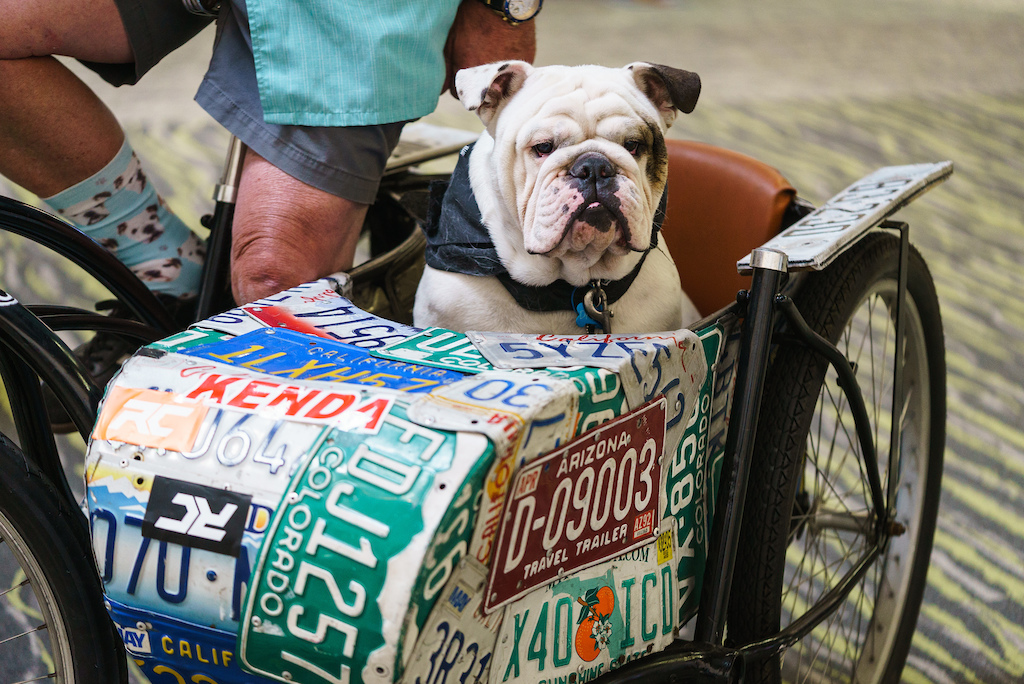 Lets start off with another photo of Hank the Tank. Much of our team came down with some sort of Reno-based plague over the last 2 days, and this randoms article got lost in the shuffle of airline hell and sniffles. So for real this time, the final, lost randoms of Interbike 2018. 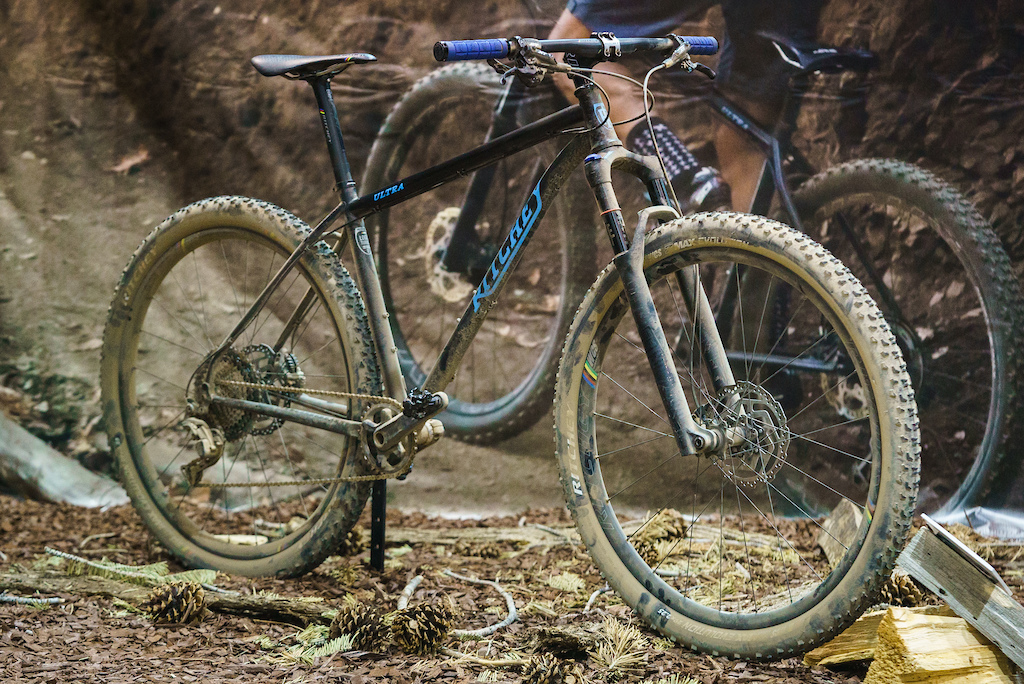 Some bikes look better dirty, and I think Ritchey's Ultra hardtail is one of them. Designed for use with a 120mm fork and either 27.5x2.8 or 29x2.4 wheels, it looks like a fun, versatile play bike—or a great winter bike. No word on weight or availability, but MSRP will be $999 USD or €999 for the frame. 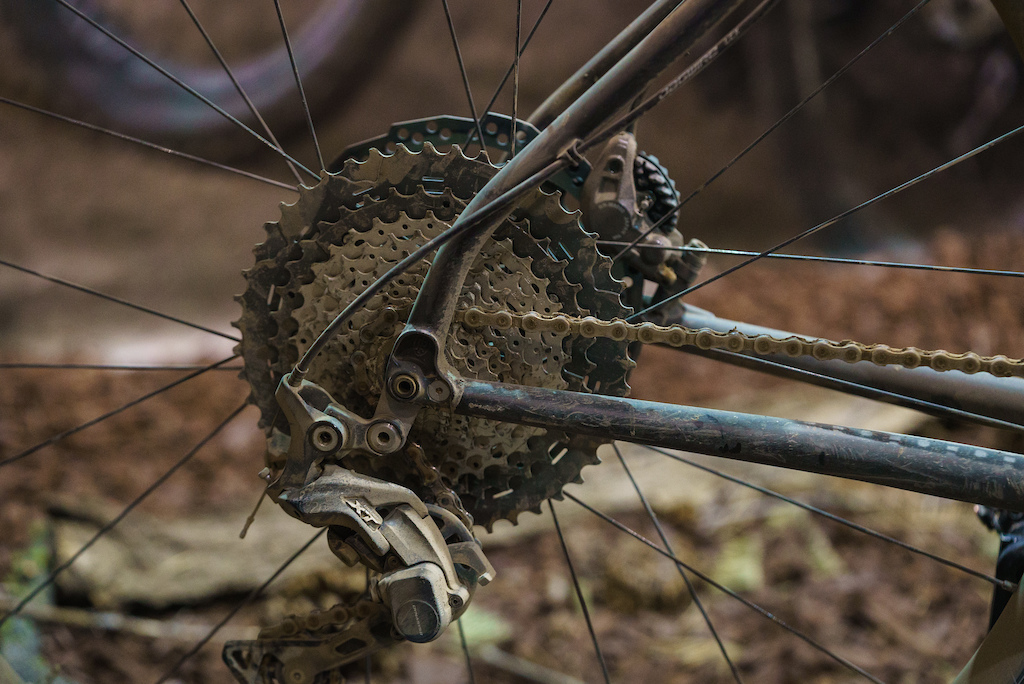 Steel tubing and clean dropouts on a Boost rear end. 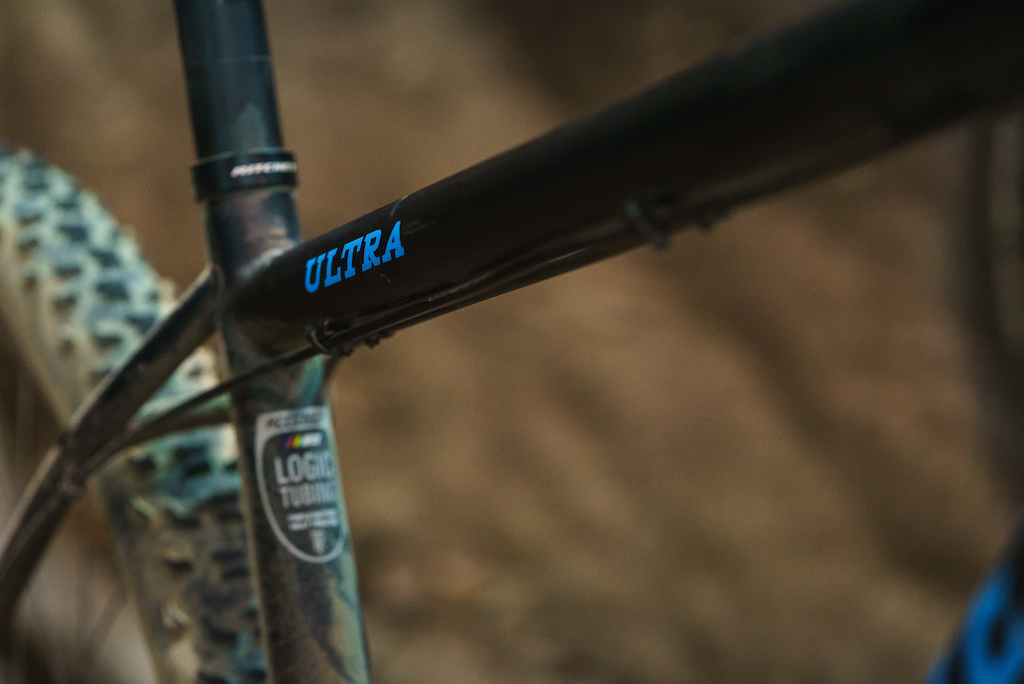 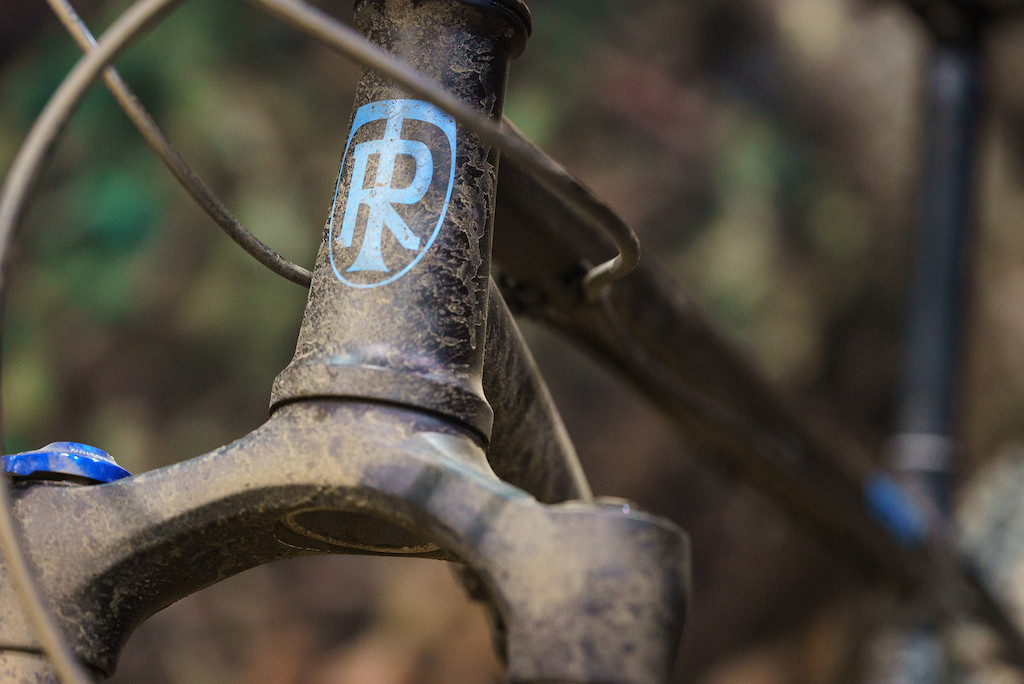 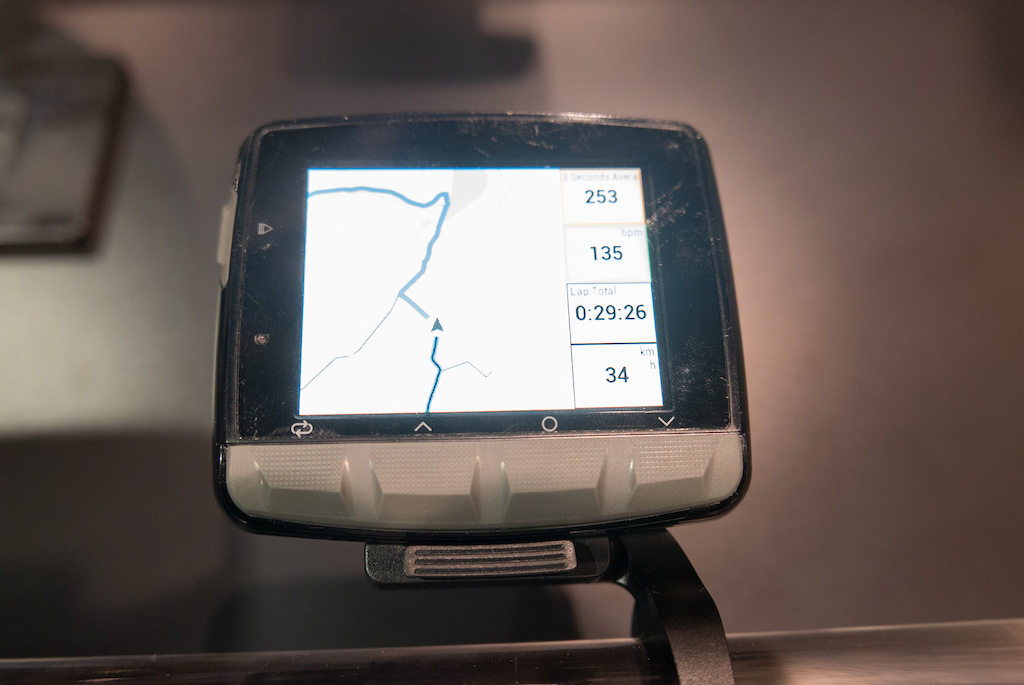 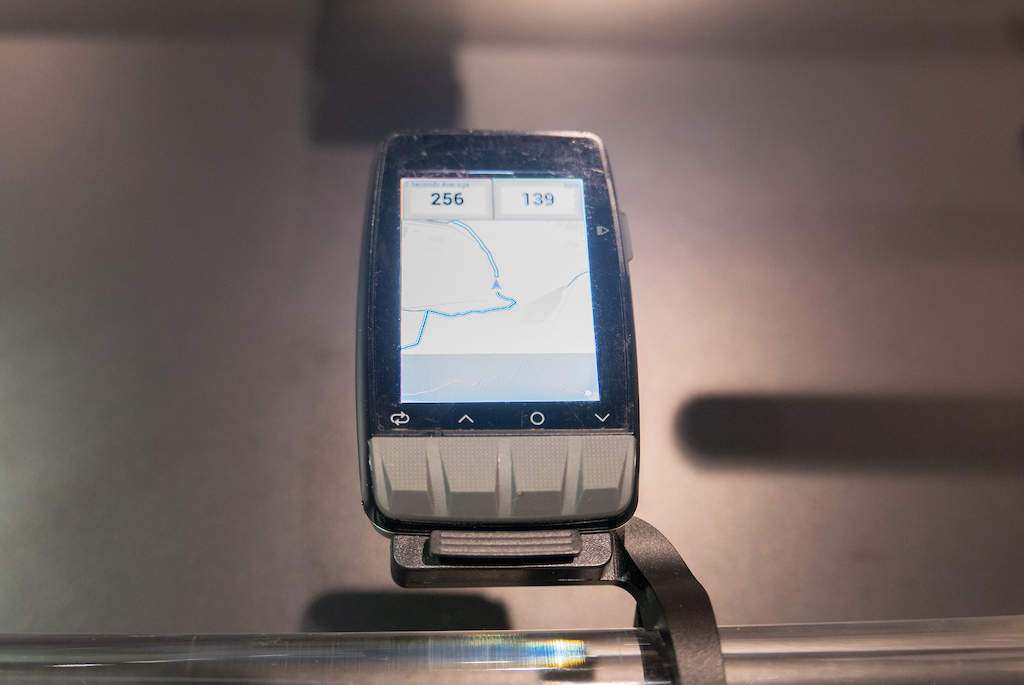 Stages are adding onto their computer line with the new full-color M50 ($249) and L50 ($349). As you'd expect, the computers are designed to allow for users to easily view their power output, with a speedometer style image that shows which zone a rider is in. Don't know your average watt output? The computer can store up to 90 days of riding, and can begin making those calculations on its own once it has enough data. Stages' goal is to make training with power as easy as possible, and the two computers are the next step towards removing the intimidation factor.

The computer also has GPS tracking and a mapping feature where the best road cycling routes are highlighted. Run time is said to be 18 hours for the M50 and 15 hours for the L50. 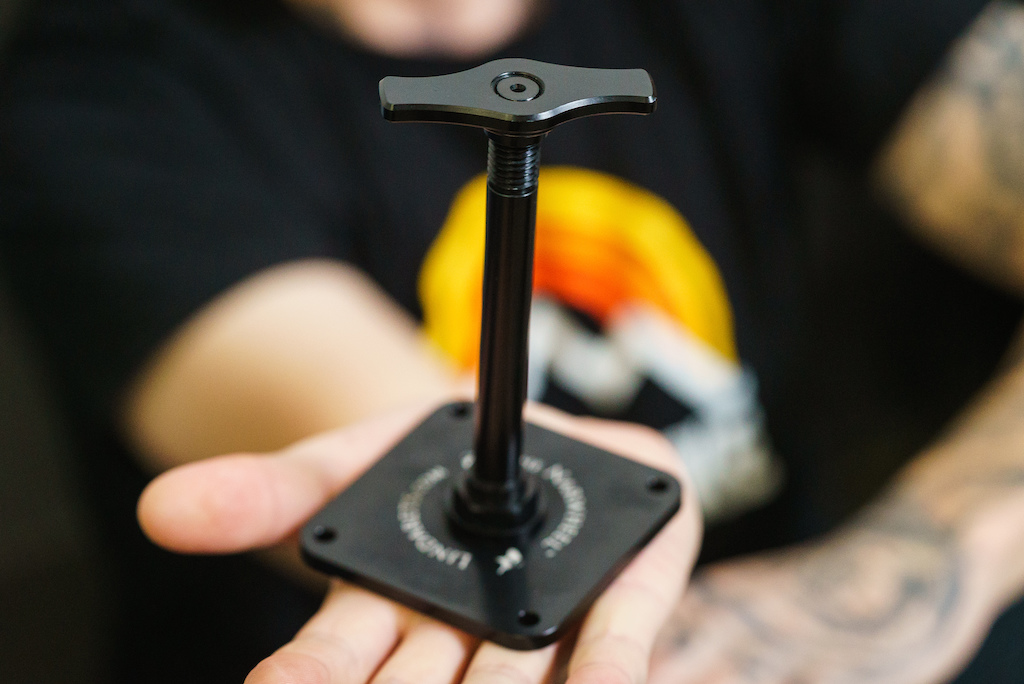 Designed by one of the guys behind Wolf Tooth, the Narwheel holds thru axle front wheels in your workshop, van, retail space, etc. You mount the base plate to whatever wall you want, pull out your front axle, and mount your wheel. MSRP $39.95 USD. 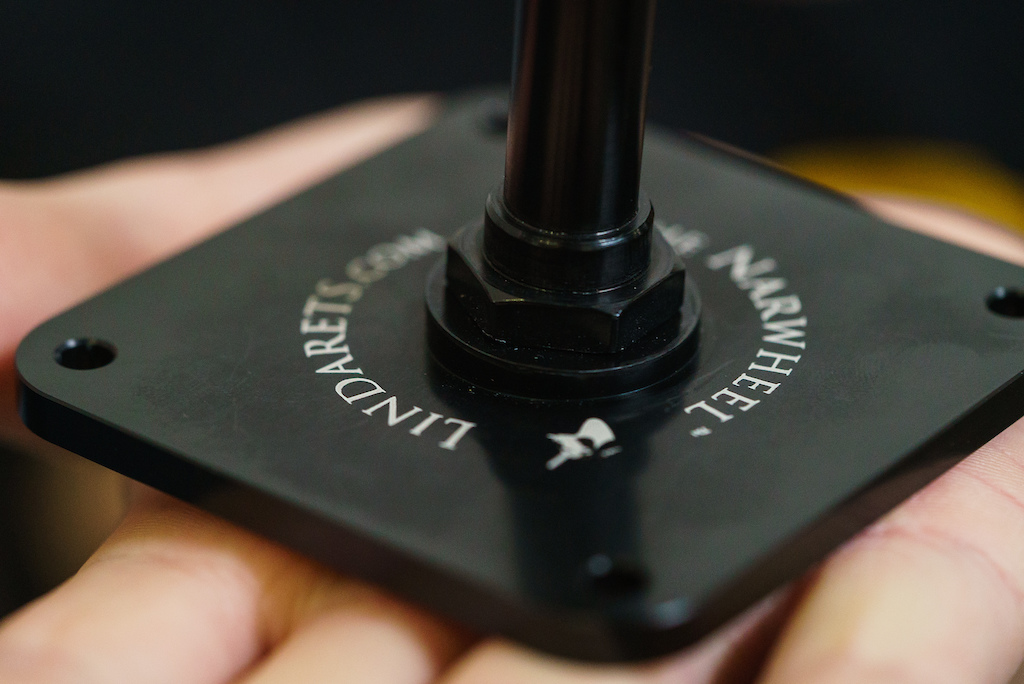 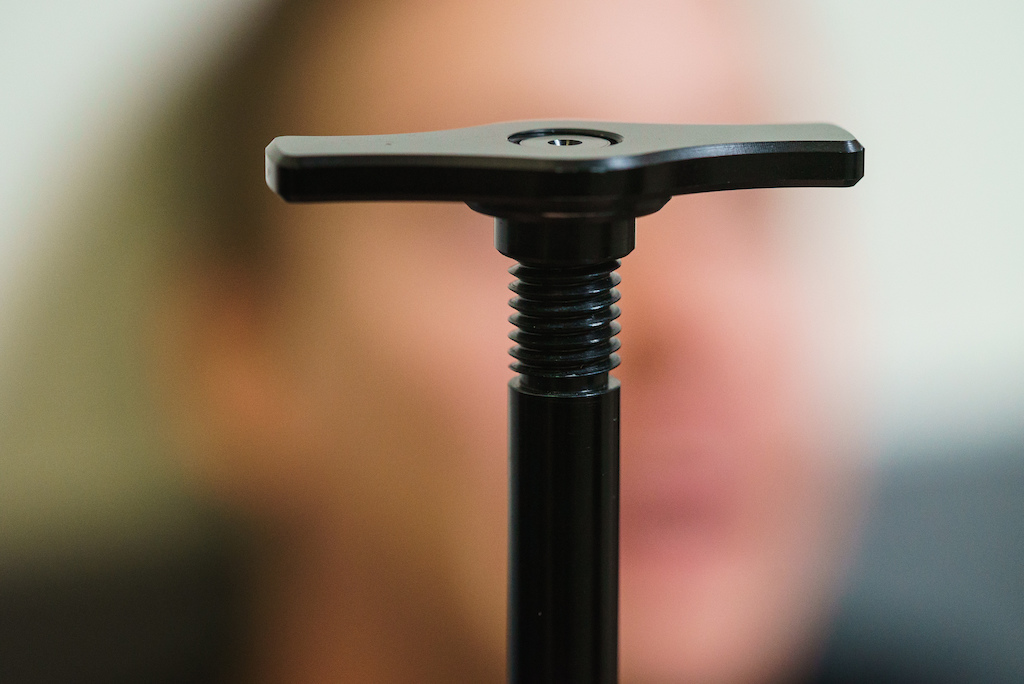 It's designed to work with tires up to 3" wide. 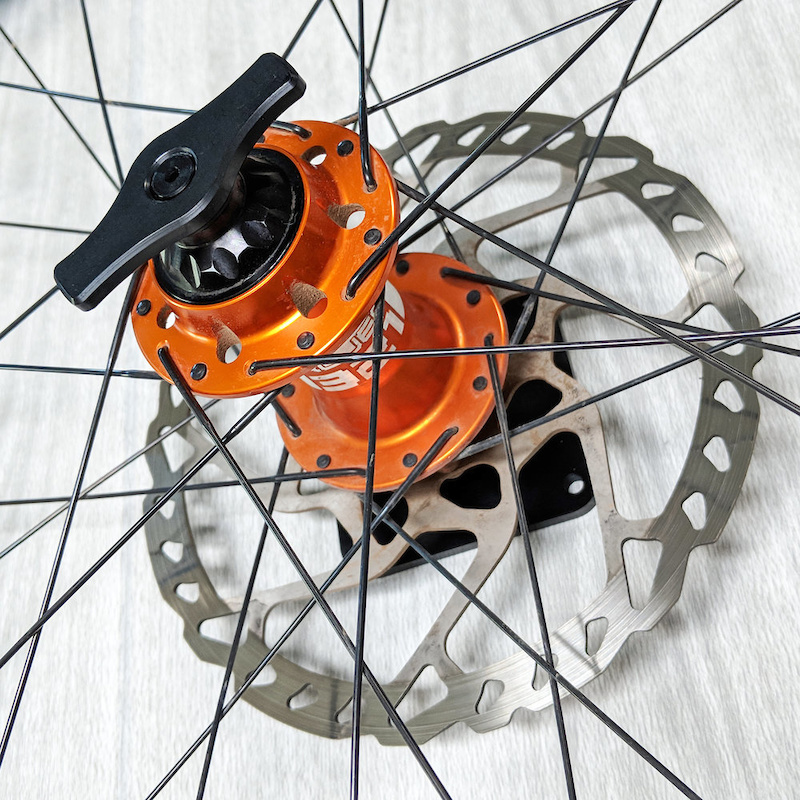 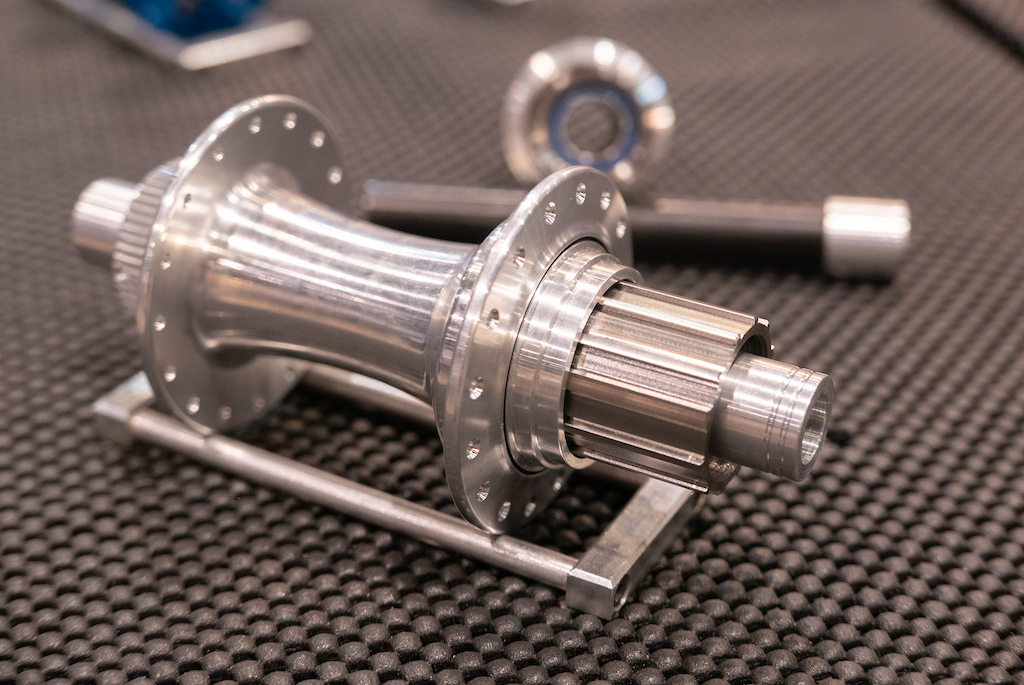 Shimano's new XTR gruppo still hasn't hit store shelves, but White Industries are already working on a hub that will be compatible with the new 11- and 12-speed cassettes. Rather than using 24-splines, which is what Shimano new Micro Spline freehub uses, White Industries went with 12, and constructed the freehub out of titanium. That should keep the phone from ringing with Shimano's lawyers on the other end, and still allow it to be fully compatible with the new gruppo. The hub is made in California, and uses three double-toothed leaf spring-loaded pawls and has 7.5-degrees between engagement points, will retail between $332 and $352 depending on color. 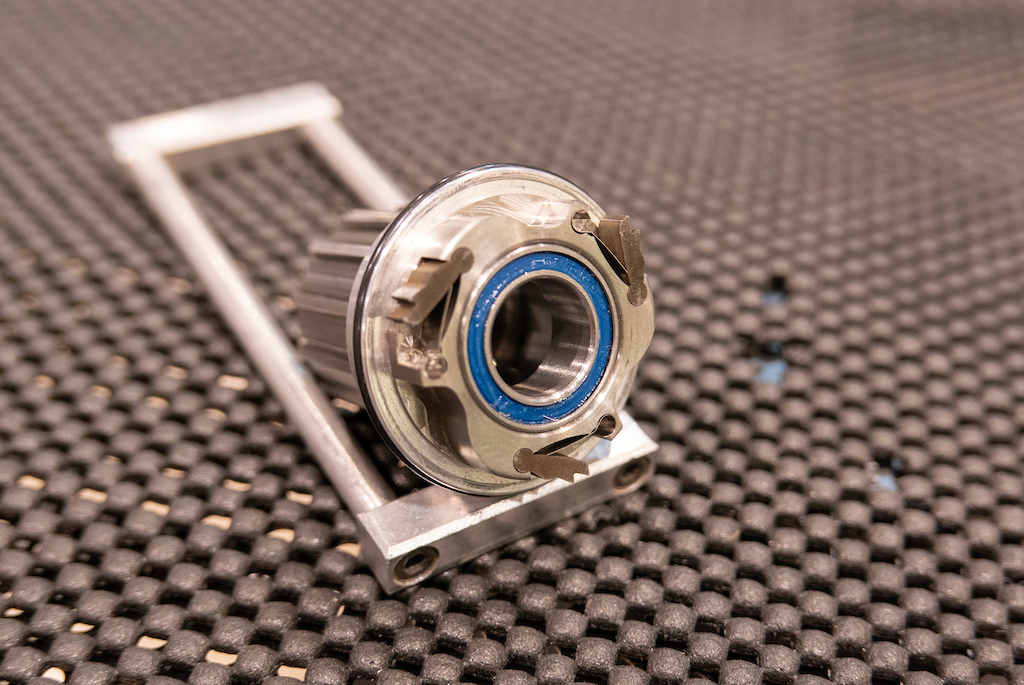 The new Micro Spline compatible freehub is retrofittable to existing White Industries hubs - the axle and freehub will sell for $180. 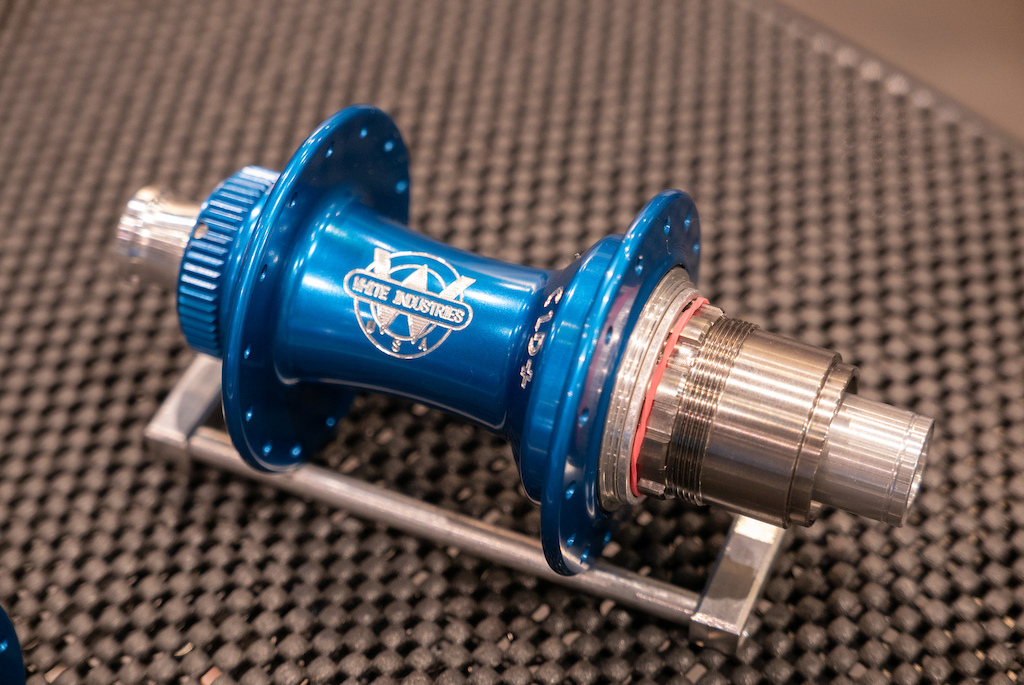 White Industries' hubs are available in a range of colors and axle sizes, including Super Boost. 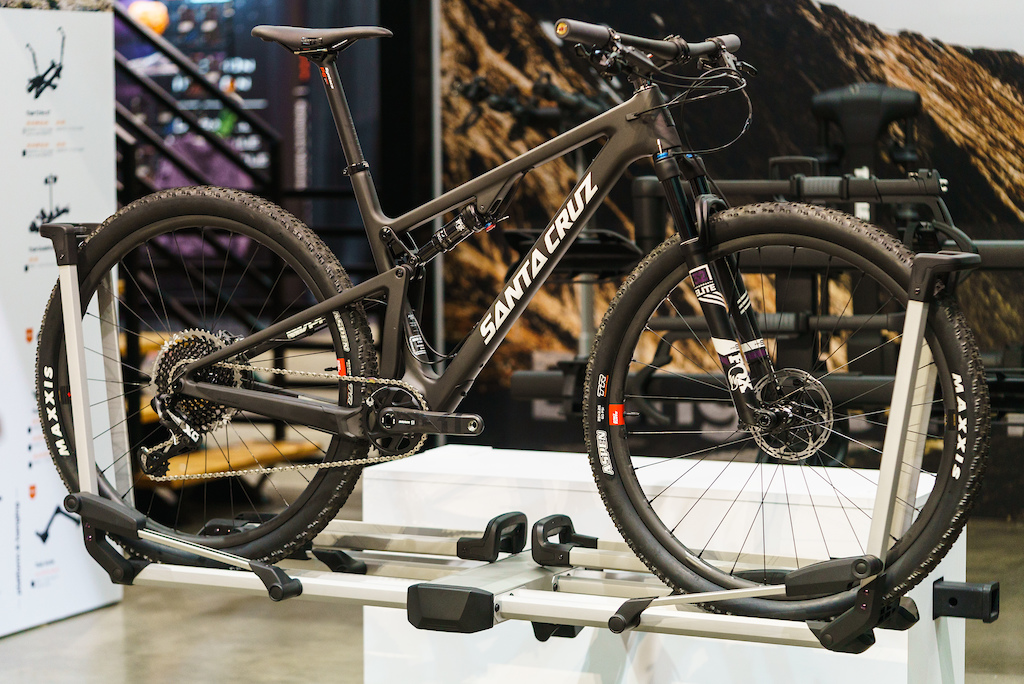 Thule was showing a prototype of their new Helium Platform rack. Official numbers weren't confirmed yet, but the rack is said to be around 40lbs—not super light, but Thule is quick to claim that theirs has to pass more EU testing standards.

We asked about the similarities between the Helium Platform and the 1Up USA system (as well as the still unreleased Saris MTR), and Thule feels they're different enough to not infringe on any patents.

Full specs, pricing, and availability to be announced. 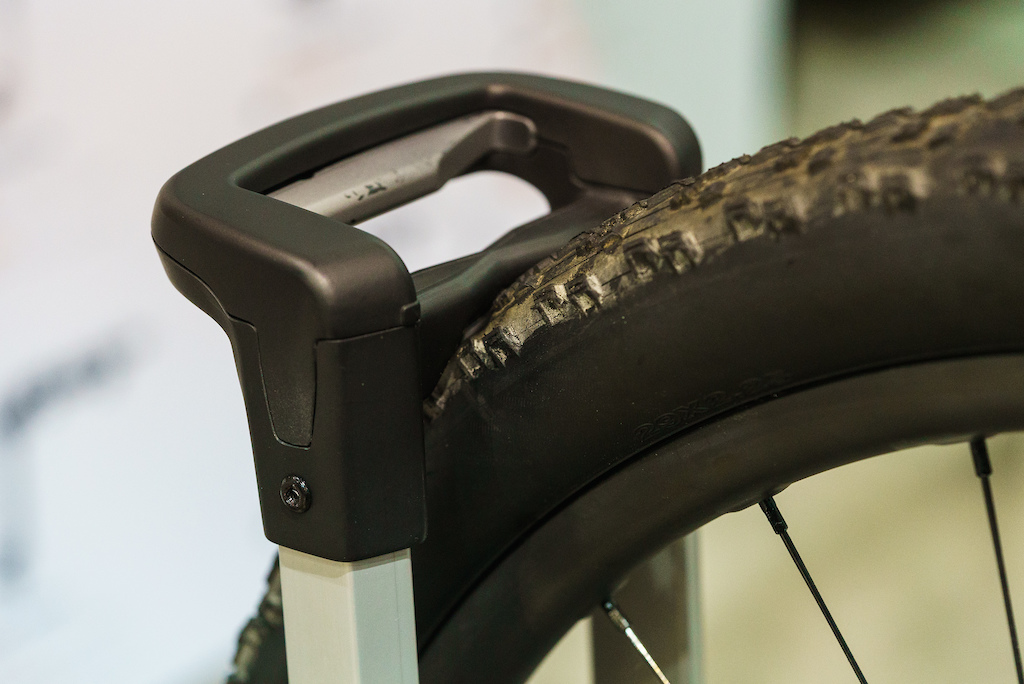 One size of arm is designed to fit almost all wheel sizes. It's a 2-bike only system. 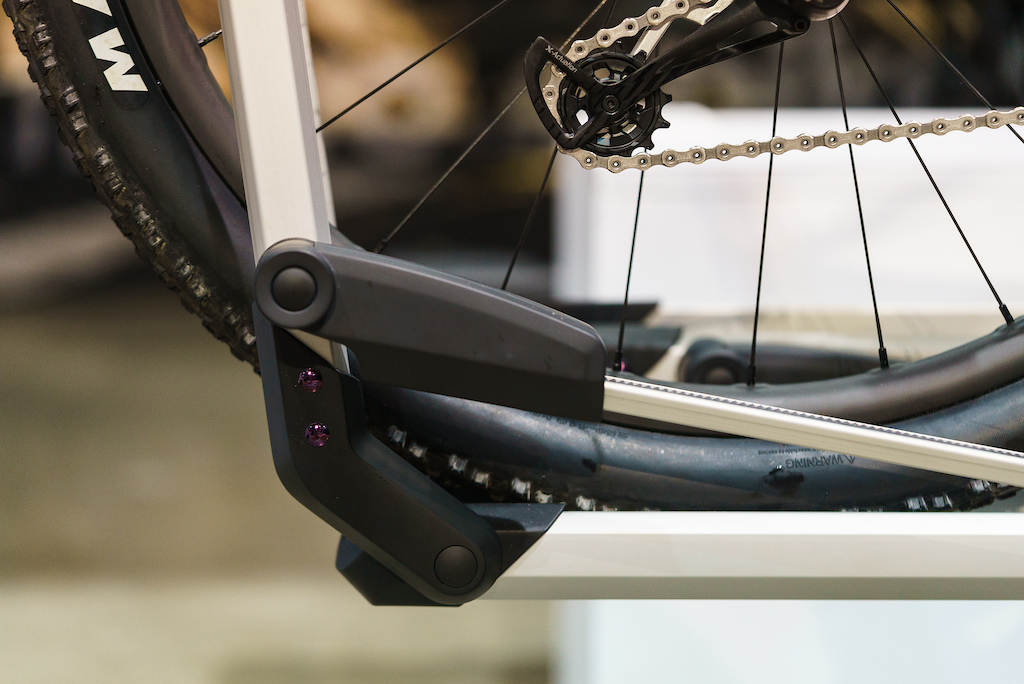 The ratcheting mechanism that holds things together should make it simple to offset bikes as needed. 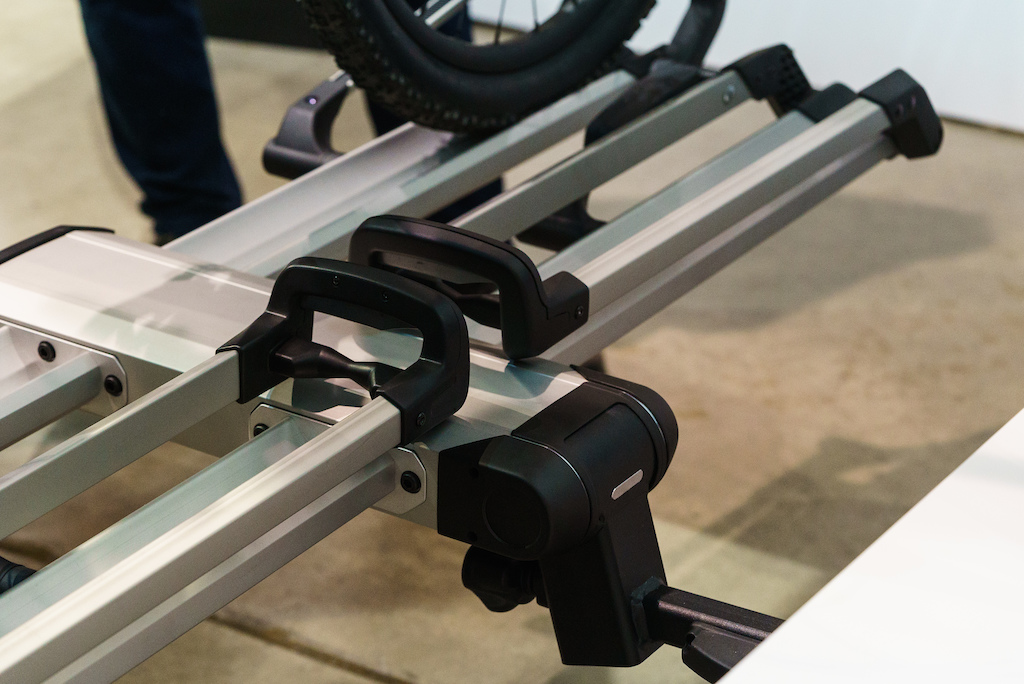 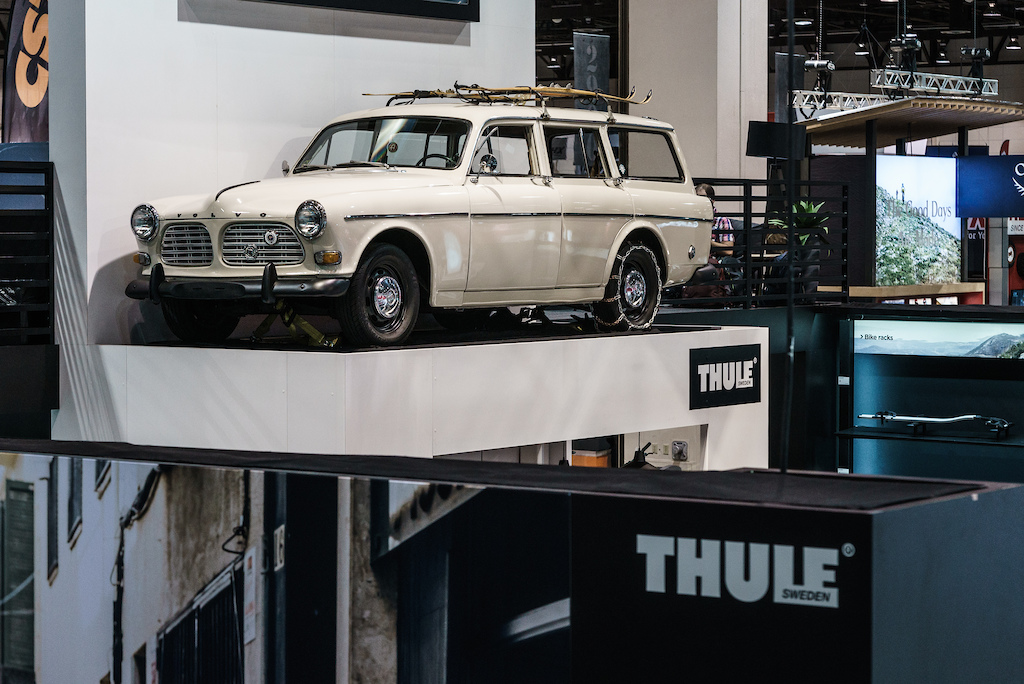 Possibly the best display of the show. 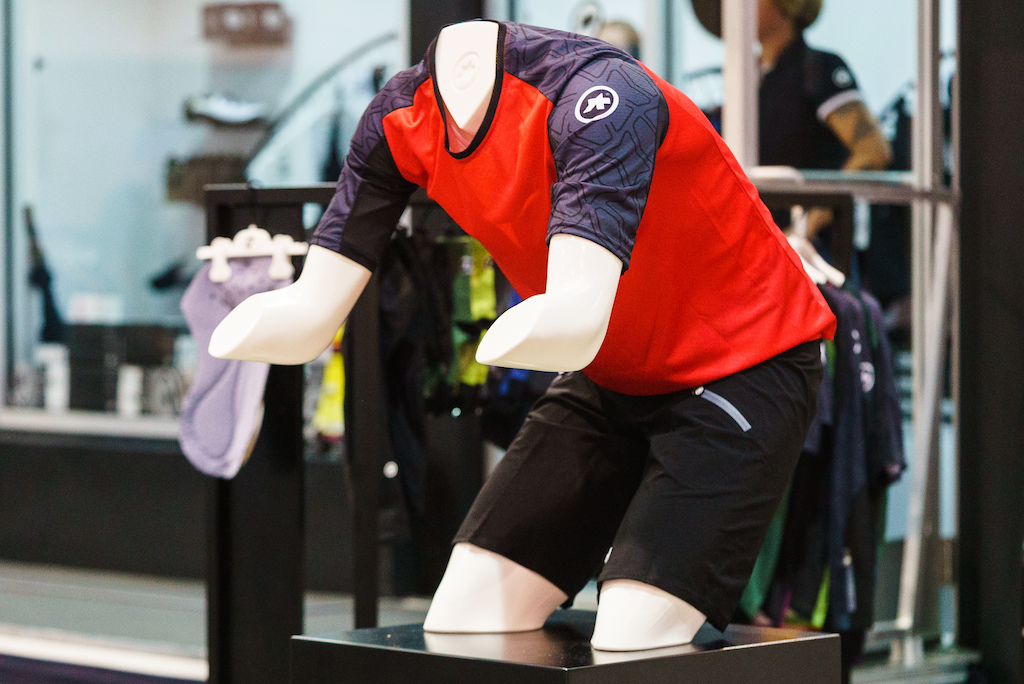 Assos is better known for their road apparel (I know at least one road pro who insists on an Assos chamois installed in their official sponsor's bibs), but the Swiss company is introducing a new trail-friendly collection for Spring 2019. The fits are trim, the fabrics are light, and they've replaced the waistband closure with a waistband that resembles yoga pants. 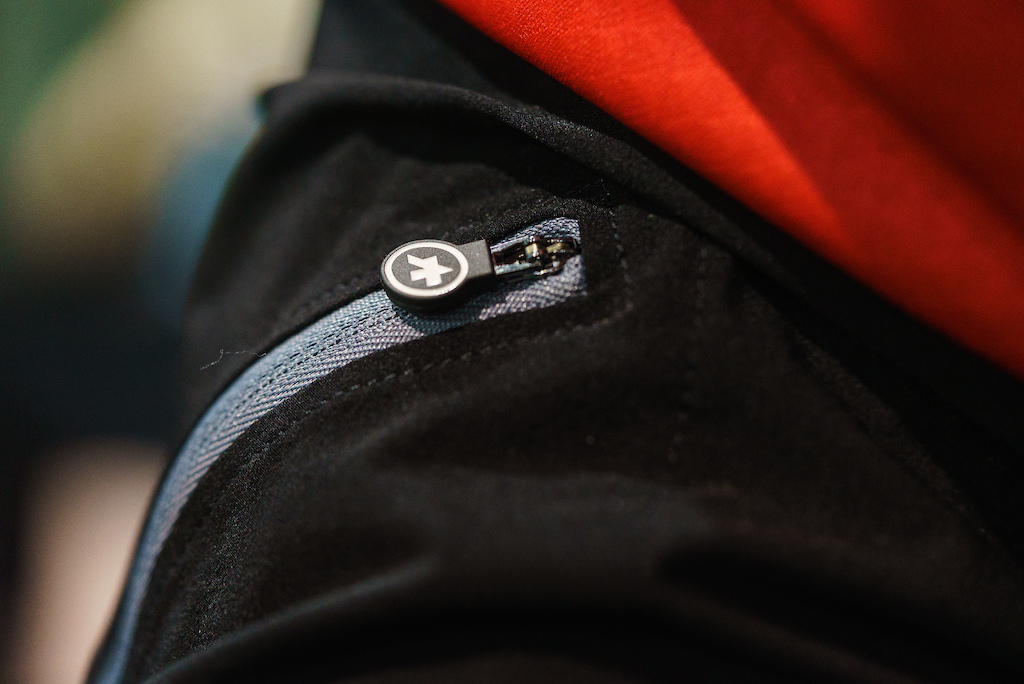 The Trail cargo shorts come in men's and women's fits and retail for $149 USD. 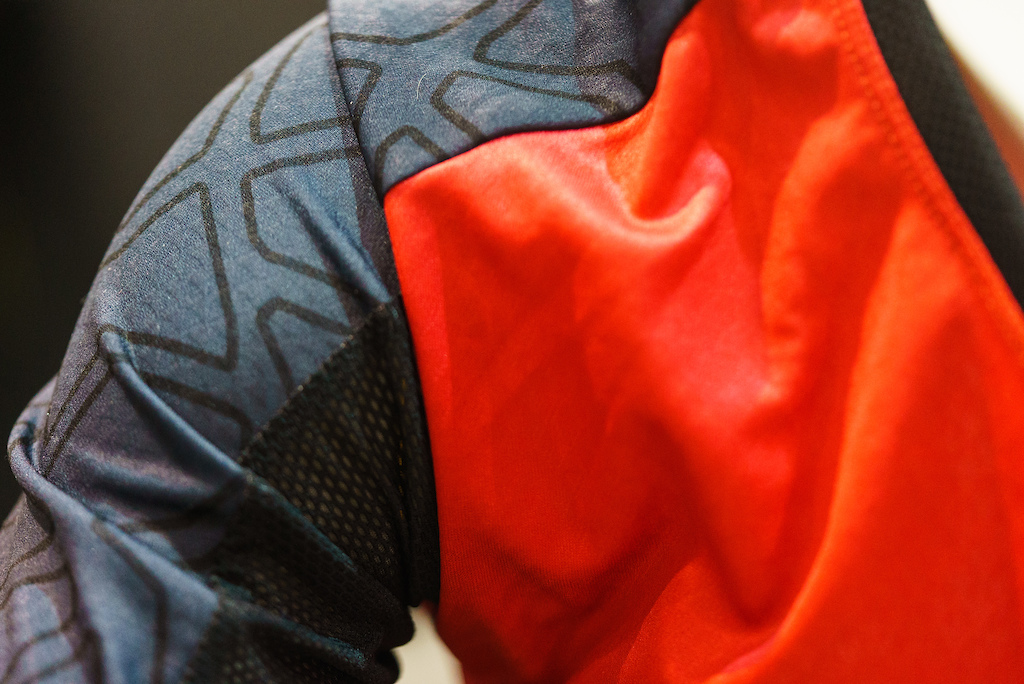 Super light, stretchy fabrics and a mesh material for the underarms put this firmly in the summer category. 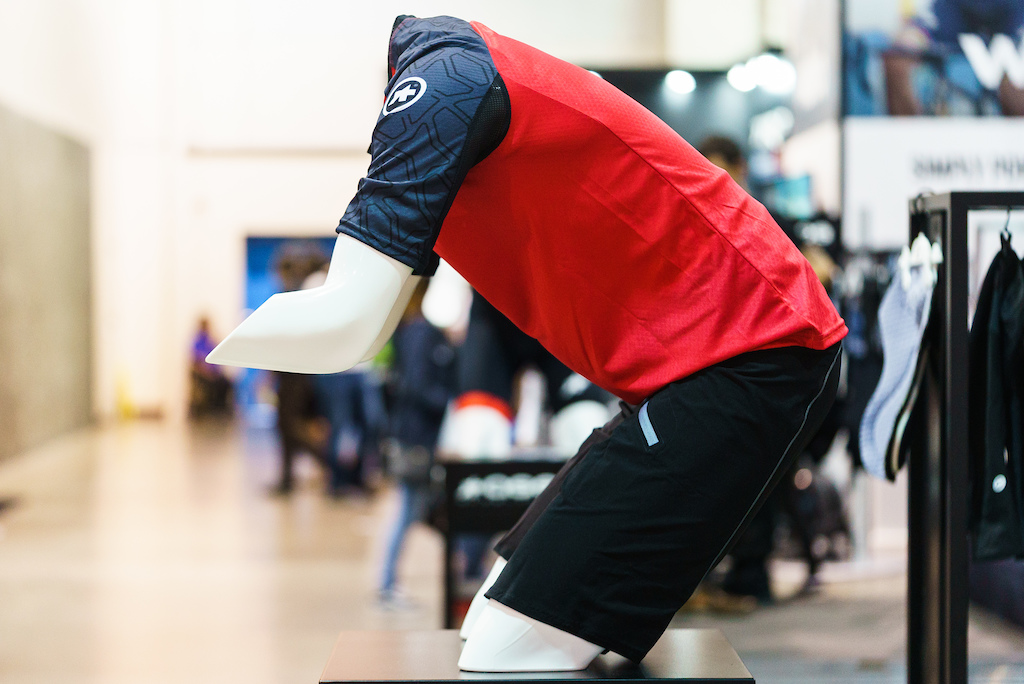 The Trail jersey is available in short sleeve ($119 USD) or long sleeve ($149 USD) in both men's and women's options. The long sleeve version (not shown) has a more durable "Dynerope" fabric on the forearms for light protection against foliage and scrapes.

seraph (Sep 21, 2018 at 21:31)
Actually if they had both front and rear axle options, these would be useful for wheel building.

Mazdamia (Sep 24, 2018 at 20:19)
I actually might pick two up some to bolt my wheels to the hard side-cases of my motorcycle. Strap the frame to the back-seat and off to play in the dirt!

Mcbutterpants (Sep 21, 2018 at 15:00)
"they've replaced the waistband closure with a waistband that resembles yoga pants"

While I am familiar with yoga pants, thanks Abby, I have only spent time looking at yoga pants while others were wearing them. Additionally, my gaze was not directed at the waistband area.

Pray tell, what are you trying to tell me about the Assos trail pants?

BiNARYBiKE (Sep 22, 2018 at 12:20)
For someone with that username, your pant knowledge is a bit disappointing.

Actually this sounds like a genius idea. Yoga pants have a wide, broad elastic waistband. I’d love to try that instead of a mess of zipper, buttons, hooks, or Velcro all bunched up when I’m crouched on the bike.

theobviousfaker (Sep 23, 2018 at 5:57)
@trails801: Geographic Restriction. This content is not available in your location.

So, I actively want to watch an *AD*, and they're telling me: no, you're not allowed to see that. I have rarely or ever used these three letters more appropriately: WTF?

omclive (Sep 23, 2018 at 7:34)
I already have a pair of shorts with this type of waistband, not for the bike though(I use them at the gym). No pressure points at all. Nothing to hang up, nothing to break. They also look like any other pair of athletic shorts. I am going to have to give these bike shorts a serious look.

rpet (Sep 21, 2018 at 15:41)
If you thought your 1up didn’t have enough plastic crap to crack and proprietary doodads that cost a bunch to replace, Thule is for you!

My 1up hasn’t aged any any noticeable way after being on my roof for 4 years. Best rack ever.

IntoTheEverflow (Sep 22, 2018 at 0:39)
@motard5:The word enough seems to imply that the the 1up also has "plastic crap to crack and proprietary doodads that cost a bunch to replace".

ybsurf (Sep 22, 2018 at 4:34)
@IntoTheEverflow: no 1up have absolutely no plastic at all just aluminium you missed the point.

hi-dr-nick (Sep 22, 2018 at 7:19)
1up made a good design and you guys think Thule and Yakima are “ripping it off”. Yeah no shit, it’s jot patented and works better, why the hell wouldn’t they? Thule and Yakima are on Qbp and other industry deal sites, I’ll sure as hell buy one for 300ish instead of 1up. Haha

ybsurf (Sep 22, 2018 at 7:23)
@andnyleswillriot: 300ish thule and Yakima yeah sure 1up will last 2 maybe 3 times longer than any thule and Yakima with their cheap plastic and steel that rust in one season. Typical north American consumer buy the cheapest cheap that doesn't last half the life of better made product and end up in landfill, Wal-Mart nation.

hi-dr-nick (Sep 22, 2018 at 7:46) (Below Threshold)
@ybsurf: North American consumer? Canada is part of North America, smart guy. That's also what everyone says about their current racks and Kuat. Guess what, my Kuat has been going strong for years and so are all of my friends thule/yakima racks. It's not as if they're coming off of aliexpress and sell for 50 bucks. Get off your high horse with your betterment issues.

ybsurf (Sep 22, 2018 at 8:17)
@andnyleswillriot: that's why I said north American instead of American we do the same in Canada

BiNARYBiKE (Sep 22, 2018 at 12:24)
@ybsurf: been running a Yakima Hold Up for almost a decade and it’s still going strong. It’s been through a lot too. I stripped out the threads on one of the trays, my mistake, and they sent me a new one straight away. Haven’t tried anything else but I’m happy with Yakima.

wibblywobbly (Sep 22, 2018 at 16:12)
@toooldtodieyoung: I’ve never seen a Thule snap off at the receiver and fall on the road. OneUp did have great customer support though but not taking that chance

bicyclelifestyle (Sep 22, 2018 at 17:37)
Even though it's not, I still want it! Passed on a drivable example for $5000 recently... Should have just pulled to trigger to accompany my turbo wagon.

silentbutdeadly (Sep 21, 2018 at 15:03)
Thank you White Industries for trying to maintain backwards compatibility for their hubs. Even an older non Boosted one...

GlazedHam (Sep 22, 2018 at 6:17)
White Industies might have the best customer service of all time. "Broke our hub after 15 years of use? No problem and yeah, we can replace it with a single speed hub with different spacing, no problem"

rockchomper (Sep 21, 2018 at 15:33)
I cant believe it, Interbike is over and only one good thing came from this trade show! The Assegai is getting 300g lighter! actually come to think of it that is big enough news it makes this whole event worth it !!!

wallheater (Sep 21, 2018 at 23:52)
I've no personal interest in the bike but one only has to use one's eyes to know that's not a 27.2 post. Then using one's brain and initiative will lead one to discover that it's 30.9. Further on from there, the reach? Who cares! It's a different bike for a different market. People on here will be moaning that Bromptons don't have a 62 degree head angle next!

shirk-007 (Sep 21, 2018 at 14:19)
Onyx showed an adapter that will allow the DT Swiss Micro Spline driver to be used on their body. I'd guess we might see a few of these come up. Would be a smart thing for someone like Wolftooth to make for a few of the more popular hubs.

airsteamin (Sep 21, 2018 at 15:30)
I guess imitation is the sincerest form of flattery. I'll keep my 1upUSA rack hands down. The ability to scale up from 1 to 3 or 2 to 4 bikes depending on the receiver size is a great feature that the Thule fails to copy. Not to mention all metal construction.

stevil-1 (Sep 21, 2018 at 22:32)
Just bucked up for mine. Nsr6 wanted a 1up originally but the exchange rate and the fact i can carry 2 more bikes sold it for me. Not to mention I'm supporting a local company . Thing is built like a tank.

mougetm (Sep 23, 2018 at 23:59)
As a guy from Chatel's valley, this new brand lindarets surprise me a lot... This is obviously a brand from the USA and i did not get the point of naming that lindarets. More cloudy informations at lindarets.com

beeboo (Sep 24, 2018 at 7:49)
That wall mount is just stupid. Why remove your current axle and have it misplaced. Is anyone even going to buy it

JohanG (Sep 24, 2018 at 11:31)
It would be nice if Ritchey would put some side knobs on his tires.
Below threshold threads are hidden

ckcost (Sep 21, 2018 at 14:59)
Judging from how I've seen the same 20 pictures/items from interbike posted across multiple platforms and multiple times....It's clear to me that interbike is pretty much in zombie mode. Can someone please just take one of those fully automatic "hunting" rifles I hear they sell at corner stores in Nevada and put it out of it's misery already?

chillrider199 (Sep 21, 2018 at 16:04)
Yeah so usually for interbike it is a split of like road biking and mountain biking. This time is was like 35% mountain biking, 25% weird companies with weird items, and 40% ebikes and such matter like that. It was pretty boring this year.
Only thing I found fun was Leatts new protective energy dispersing gelatin. Id smash the shit out of my hand with a rubber mallet. As long as the gel was there, I didnt feel it. Cool stuff.