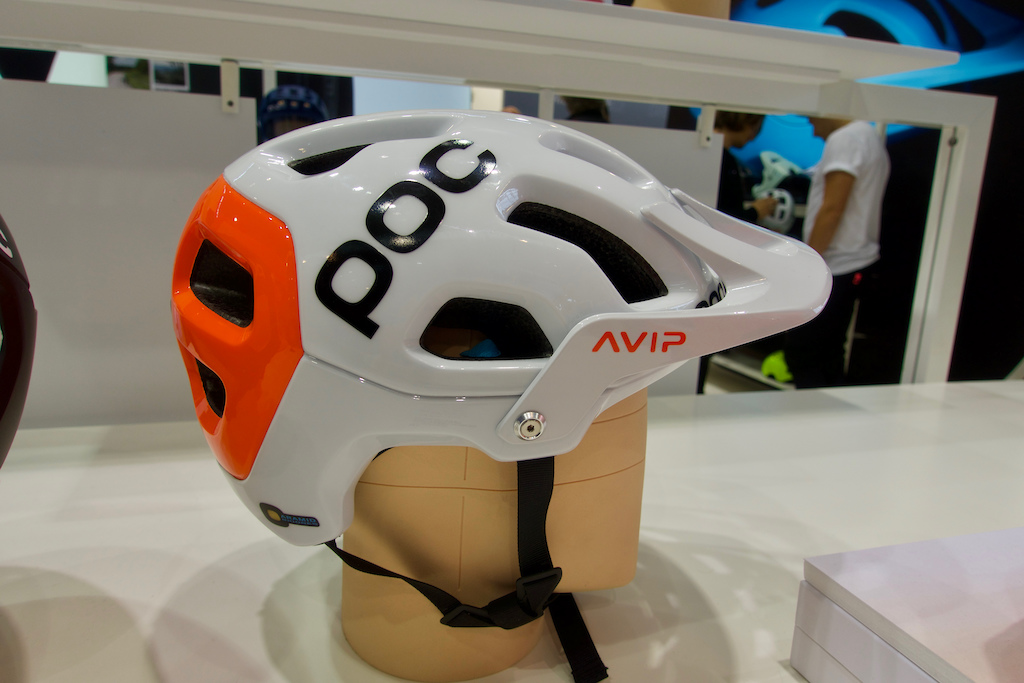 POC have teamed up with twICEme, a Swedish start-up, to create a helmet that stores your medical data and can transmit it to first responders in case of a crash.

The whole system works through an app that POC have developed to go alongside the helmet. You upload your data to the app including information such as your blood type, allergies, existing conditions and your organ donor status and then transfer this data into a chip in the helmet. First responders will then be able to scan the helmet using their own app and receive all the data to their phone.

The chip uses NFC (Near Field Communication) to communicate the information. NFC is a method of transferring data that does not require GSM, 3G/4G/5G or wi-fi so can be used wherever you are. It also only stores the data locally so it can't transmit your data to any third party. NFC transmission also means you won't need the specific app to read the data, apparently any app that uses NFC, including Apple Pay, will be able to display a text file of the data.

TwICEme was announced as a partner for the ICAR (International Commission for Alpine Rescue) so it should be something that mountain rescue teams are aware of and able to make use of as well. 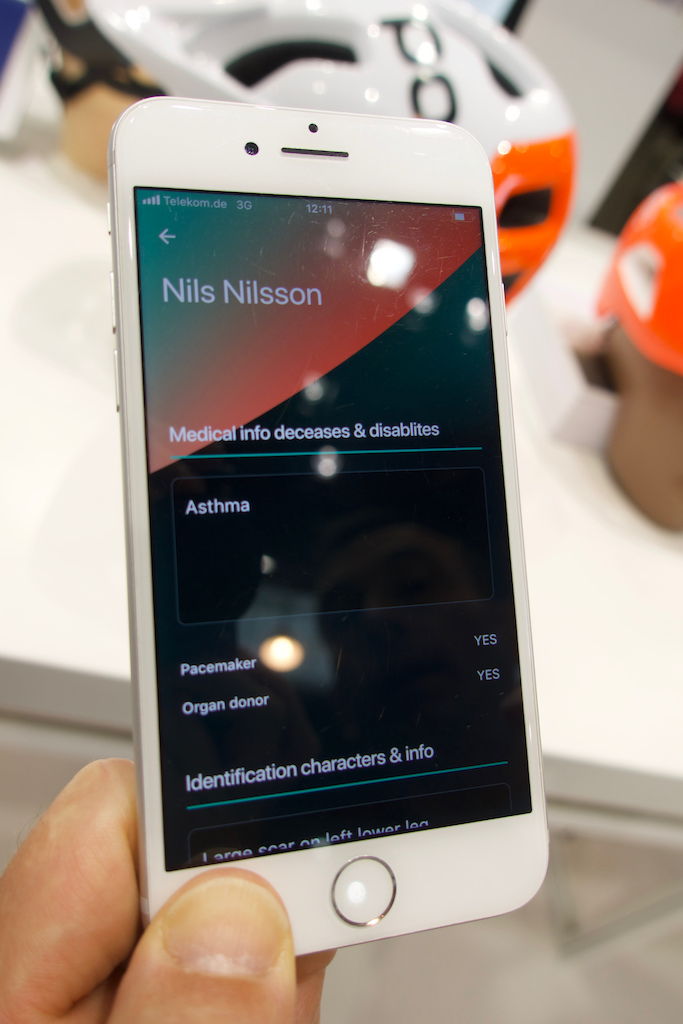 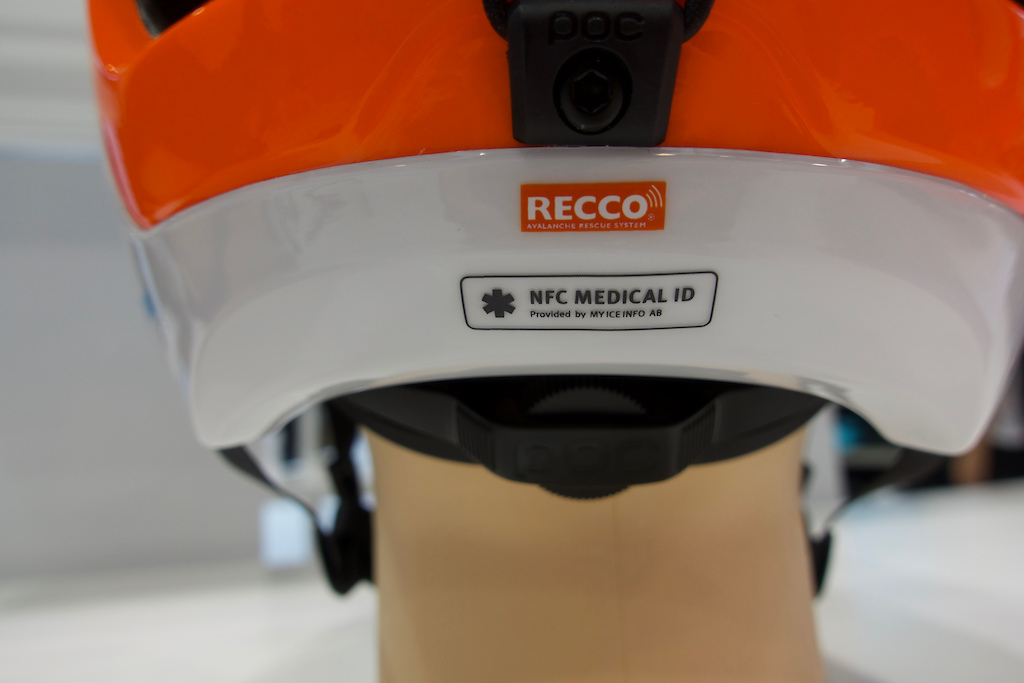 The chip is currently only available on the Tectal Race Spin helmet and will add around $10-15 to the price of it. POC currently have the exclusive rights on it as they worked with twICEme to develop the technology but they can imagine it spreading to other helmet brands in the future as MIPS did after they first used that in their helmets. 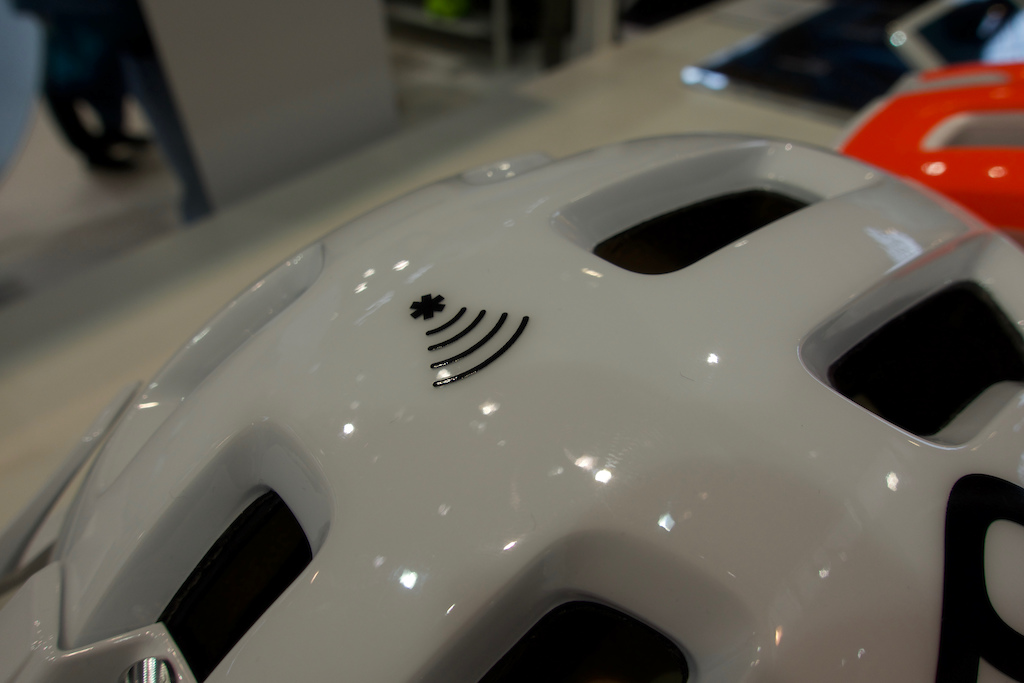 This logo should let First Responders or other riders know your helmet has the chip installed so they can help.
Solar Powered Sunglasses 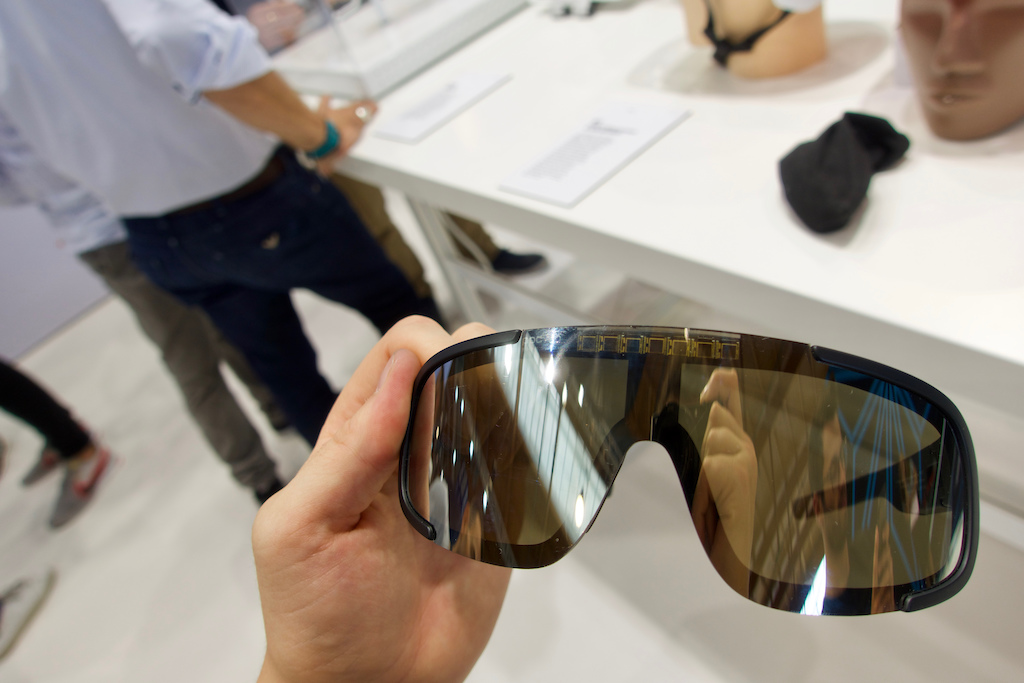 POC also had a pair of sunglasses that feature an electrochromic LCD lens that instantly and automatically changes tint depending on the intensity of ambient light - darker in bright light and lighter in darker conditions. The change is instant, automatic, and best of all, powered by solar panels above the lenses so you never have to charge or change batteries. 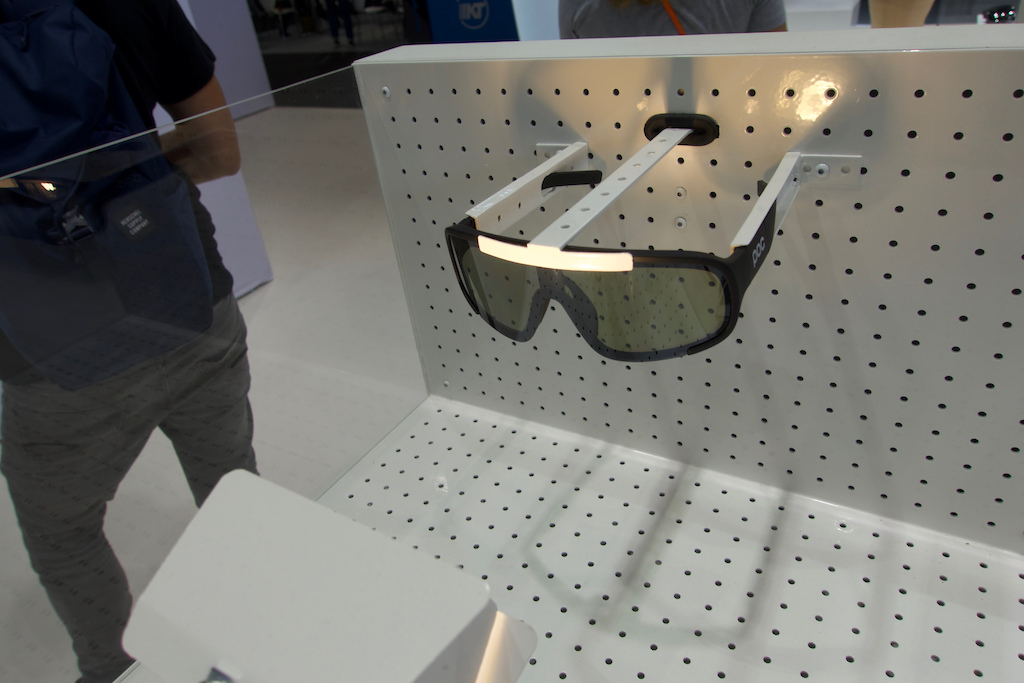 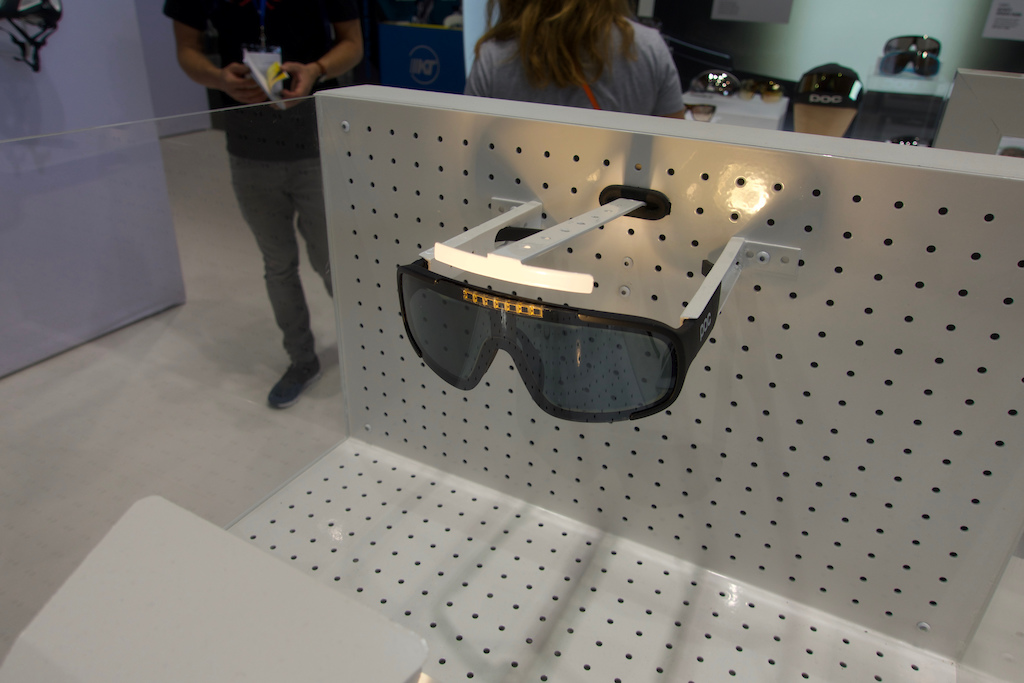 Wax off
At the moment, the glasses won't be great use to mountain bikers as a helmet peak will interfere with the sensors and we imagine the glasses will be distracting in changing light under a forest canopy. However, if you're planning a more long-distance ride with long periods in the sun and shade, these could be for you. 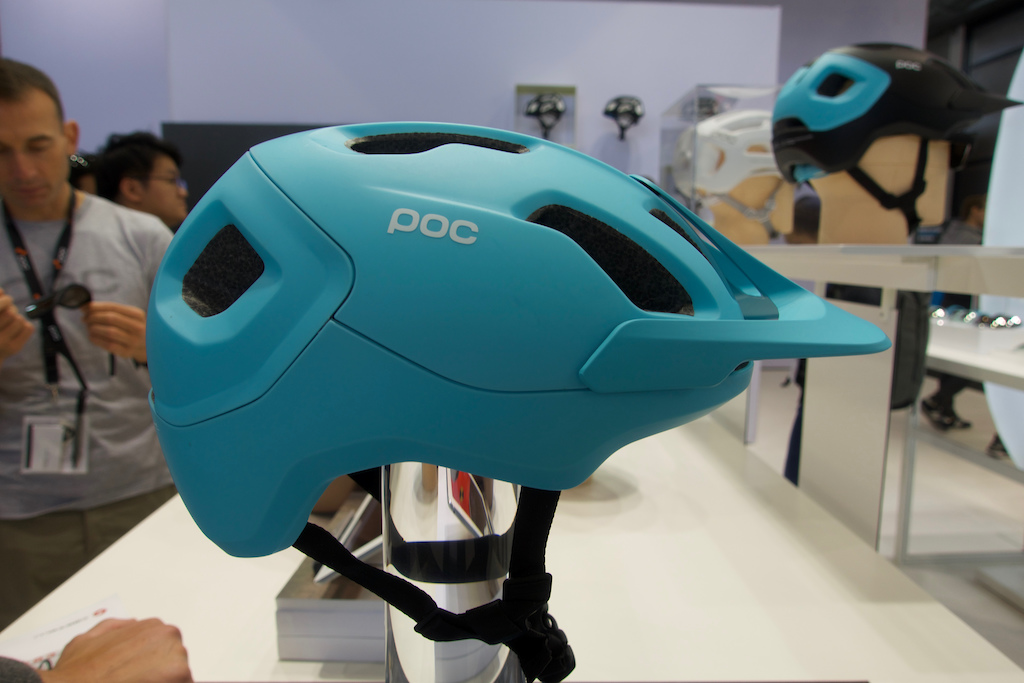 Finally, POC has introduced a more affordable trail lid to its offerings, the Axion Spin. POC were keen to include as much of the tech from their high-end helmets in this so you still get the Air rotational impact system and the unibody shell. It also includes some tech that's not on the Tectral or the Coron, a breakaway visor. POC have developed their own system here that allows for easy ejection in a crash to reduce load points and allow you to ride home without a broken peak, expect this system to make its way onto POCs more premium helmets when they get updated. 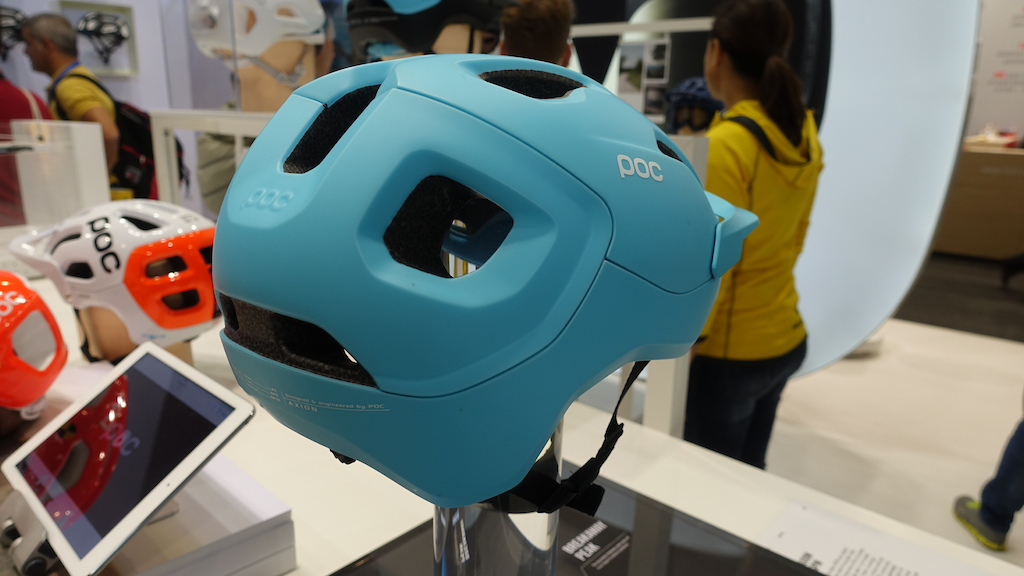 The helmet weighs 305 grams for a medium, which is actually a reduction on the Tectral. When we say more affordable, don't forget this is POC, who specialise in high-end products; this helmet is cheaper than the rest of their range but will still cost €160. 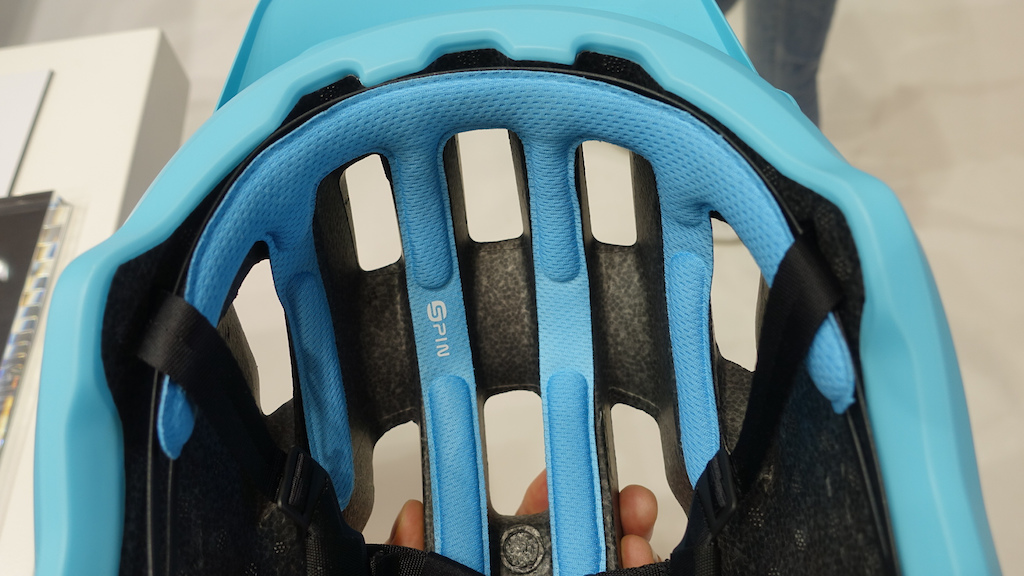 warmerdamj (Sep 8, 2019 at 9:16)
My Bell Super R2 also has as sticker that directs somebody to a website that has all this info and a contact person. As I read the article I could only think of how much simpler my sticker option was. But if there's no cell service my sticker is useless where this isn't. So that's pretty cool, especially for 10-15 bucks.

TrevZ (Sep 7, 2019 at 6:00)
Transcranial O2 monitoring with a warning beep if you're making line choices without properly perfusing your cortex?

fneuf (Sep 7, 2019 at 1:34)
POC front webstore distributes them. For me including shipping it was a tad cheaper than bike-components.

TrevZ (Sep 7, 2019 at 5:59)
I'm always happy to see things that promote safety and wellbeing of riders, however I don't see the benefit of this. I can't think of a preexisting diagnosis that would be relevant in the prehospital setting in terms of affecting decisions that would be made at that point. Looking at the info provided in the photo, asthma is irrelevant as if someone was having an asthma attack you're going to treat it regardless, pacemaker would show up immediately on ECG and also be visibly obvious most of the time, organ donation stuff doesn't affect prehospital decisions. Even if someone were a hemophiliac it wouldn't change the prehospital care nor the decision of which hospital to take the patient to. The other thing is that most new phones have an emergency medical information area accessible without having to unlock the phone and I'd have to think everyone is going to look there. Can anyone think of a preexisting condition that paramedics need to know about?

Jclaa (Sep 7, 2019 at 8:25)
A list of current meds and allergies could affect prehospital decisions. But for the most part, you are absolutely right. You are going to treat whatever is the most pressing problem in the field regardless if the info.
I am also amused that the sticker is on the back of the lid. Most patients who need a rescue (spinal injury) are found on their back by the time help arrives.

mtbikeaddict (Sep 7, 2019 at 9:33)
Ok. So I'm slightly disappointed b/c I expected the helmet to store crash data, but oh well, cool idea.
Those glasses though! I was just thinking about something to that effect earlier this summer! Had to walk from blinding sunlight into a dark staircase, and had sunglasses on and was carrying stuff. I bemoaned having to set down my load, take off my sunglasses, then restart and resume. I audibly wished for sunglasses that changed to match the conditions... and my friends promptly laughed at me and said "they already make those, they're called transition lenses". I couldn't convey my frustration and vision to their understanding... I had worn glasses for over a decade, and transition lenses for a good deal of that time... I knew perfectly well about that stuff... my problem that day was instantly going back and forth between the extremes hands-free and needing to see the stairs... transition lenses take time to transition... @poc this is awesome! Get these available inexpensively and its a winner! Or maybe I just thought it was cool. Either way.