Join Pinkbike  Login
So after last year's manic weather conditions, it was time to try the very first complete Trans Maritime Alps Classic again. We met up with our good friend Adrian Nash, from Rivierabike at Molini who was going to try and guide for the week. As he had never done most of the route before it was very much 'the blind leading the blind' but the forecast was good and we had high hopes that this was the year...

We arrived at Finale Ligure late on Sunday evening and decided the best way to start the trip was a quick 20km ride up the hill and round a bit and back to settle the bikes in... For me this was the inevitable run one, smash one... Not the first or the last of the trip...

We met up with Lou and Alessandro from Just Ride Finale for a day of local trails in the birthplace of Enduro, this as it turned out meant super fast flowy trails such as Tobogan to super steep techy EWS 2 (the one they didn't race), which is for the record - mental, to more flow to leaves, lots of leaves... Jamie came a cropper today and was to spend the rest of the week groaning and popping Ibuprofen like smarties. 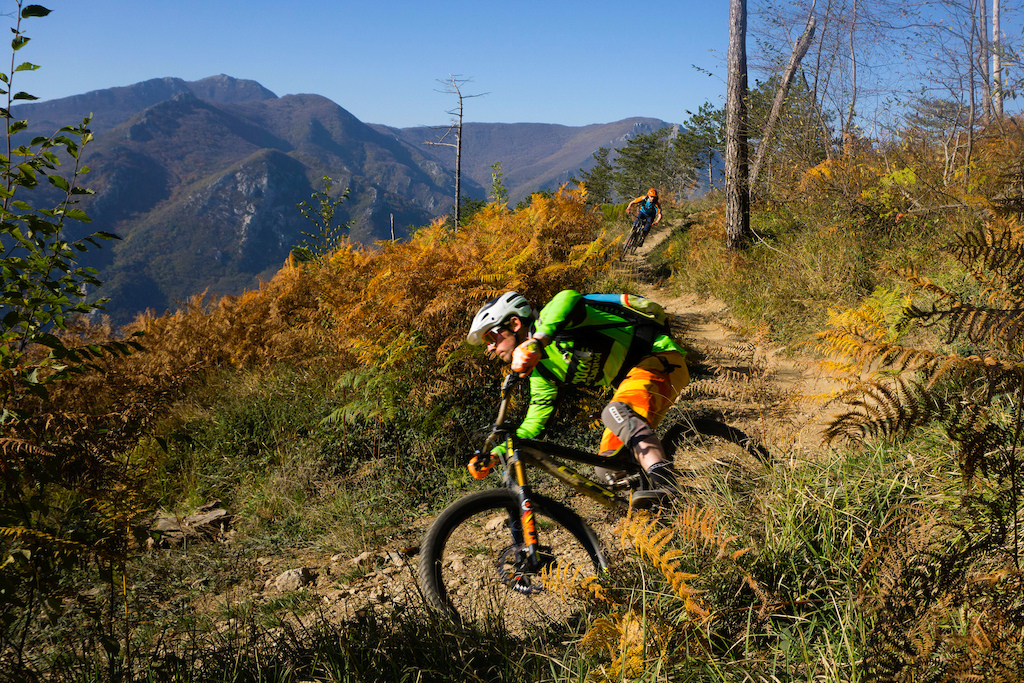 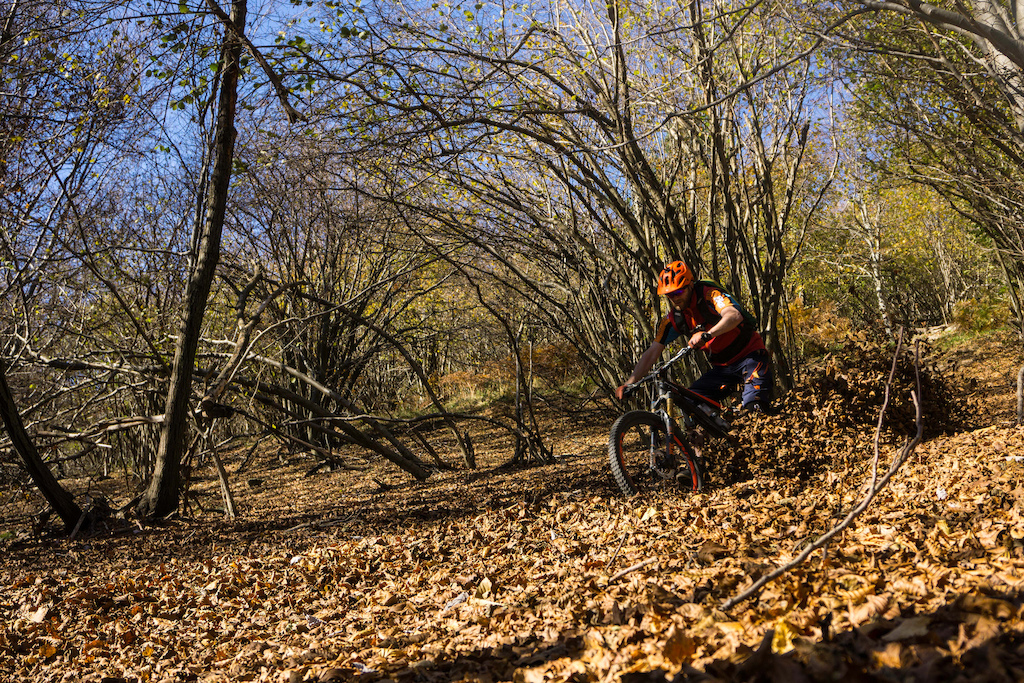 Leaves became a theme of the day with lots of deep leaves, and more leaves thrown in for good measure... 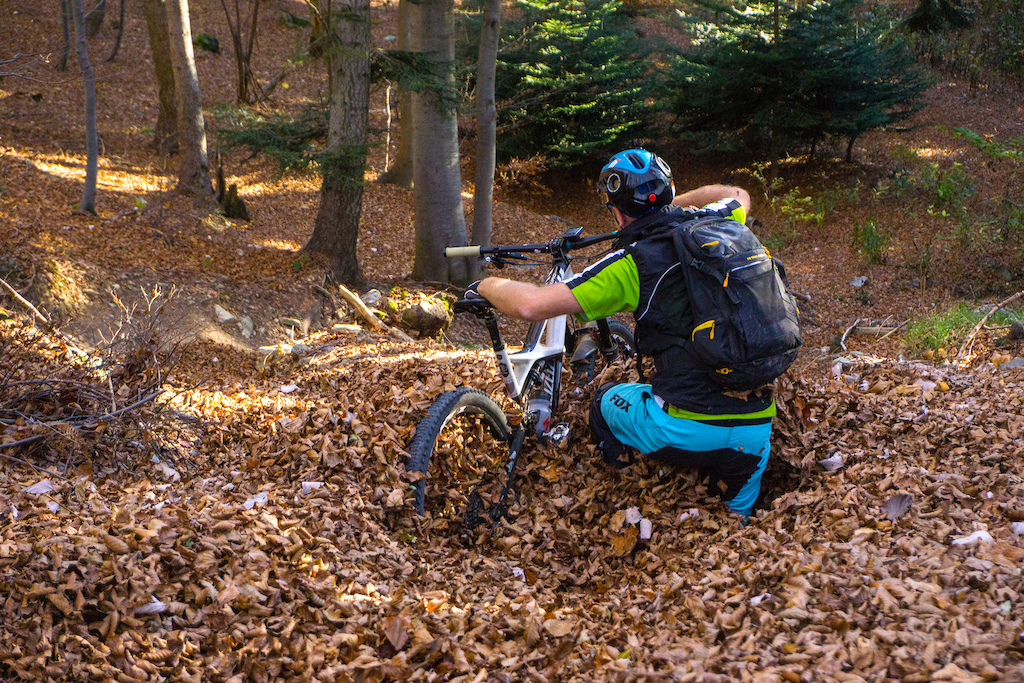 Which at times proved problematic...

This was to be the high point of the week. It did turn into the 'high' point of the week and the 'low' point, as at 2500m it was -4 degrees, in a storm, wet, windy and wholly unpleasant. The day started ok at just over 1000m with a pit stop mountain style. This proved to be the last comfort of the day as at roughly 2200m we entered the clag and life became less than pleasant, in fact that is an over statement, it was horrible. However, after reaching the summit of Pizo d'Ormea at 2500m we had a fantastic 1500m descent and the day ended with a superb dinner and a log fire... 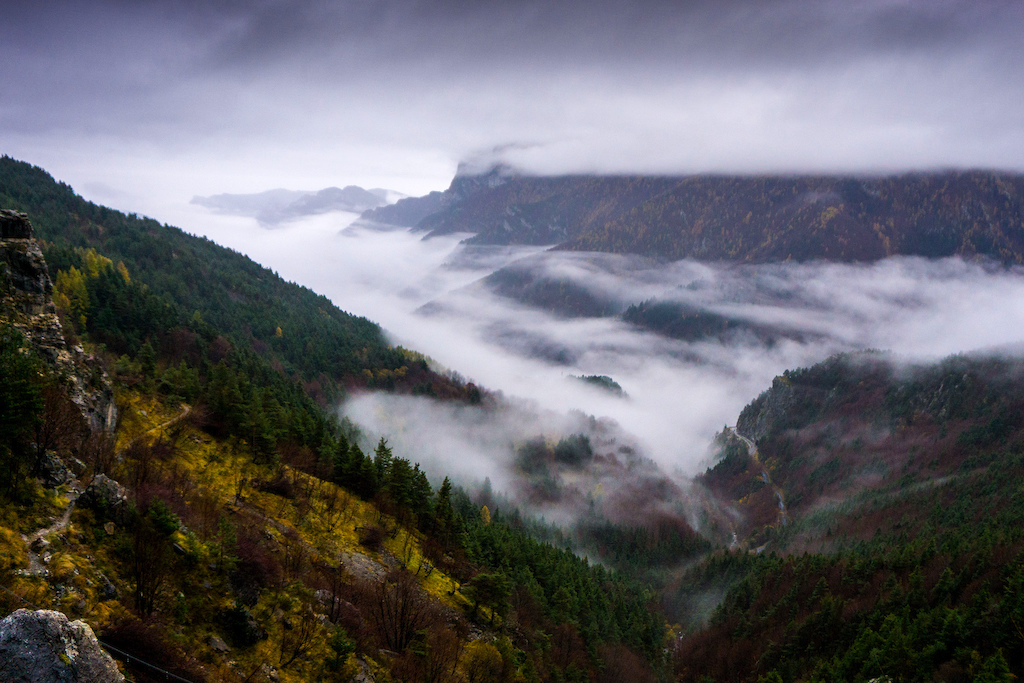 Looking back into the clag.

In a stark contrast to the bleak hike-a-bike-athon this ride was to be a 50km tour of the mountains in stunning surroundings and a clear blue sky. Rather sadistically for most of the day yesterday's peak was in full view and bathed in autumn sunshine! 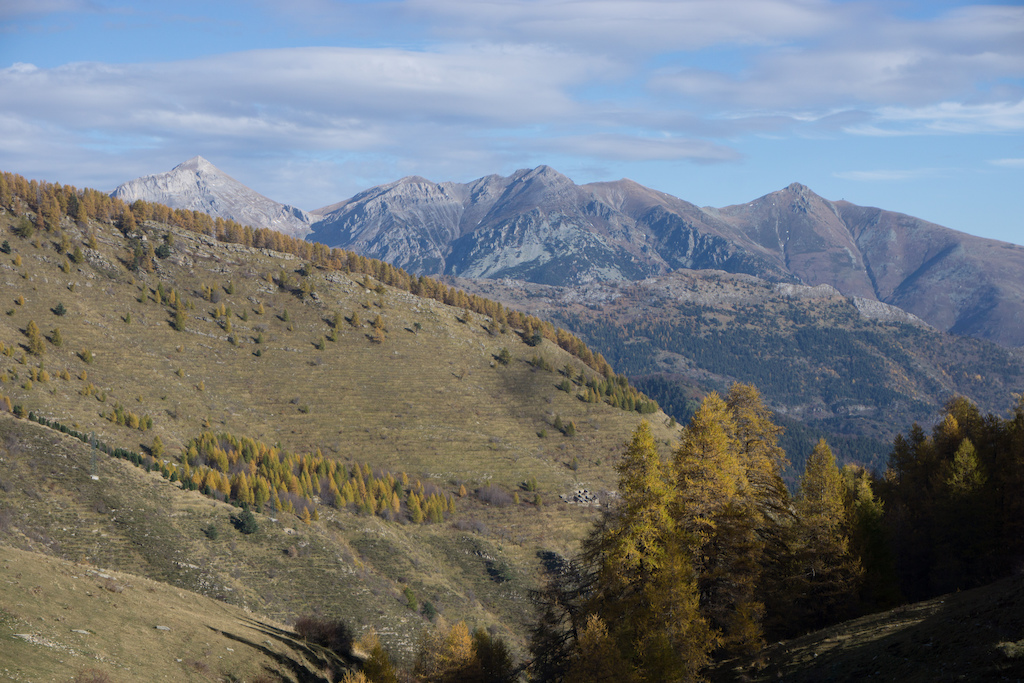 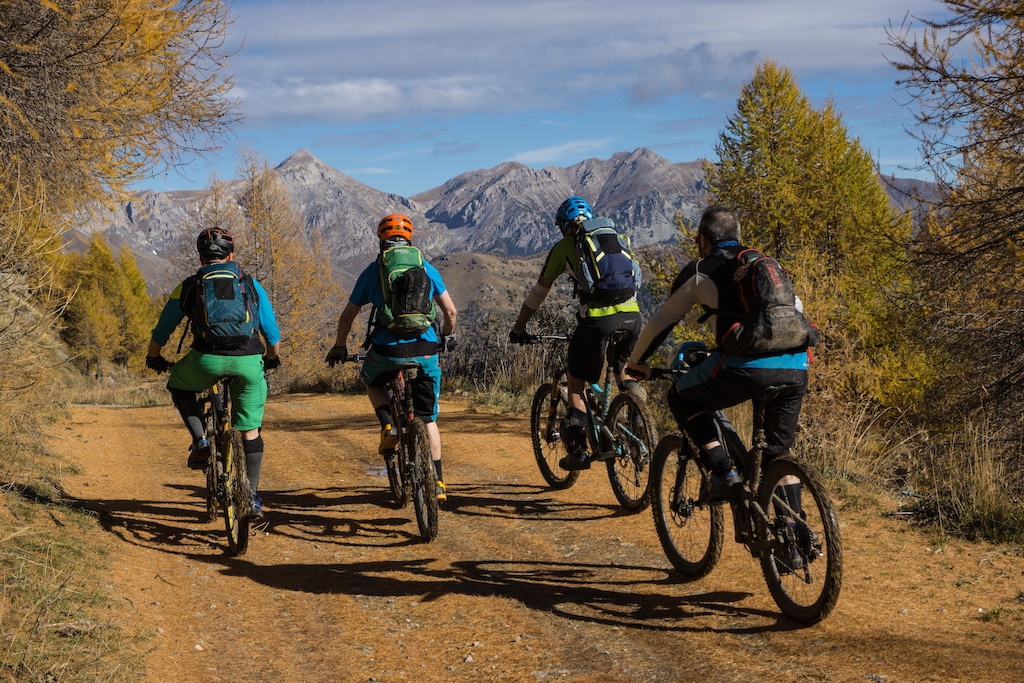 We slowly wound our way up through some of the most stunning scenery you could ask for until we arrived at Fort Central, leaving the 10km descent into Tende and our hotel for the night. 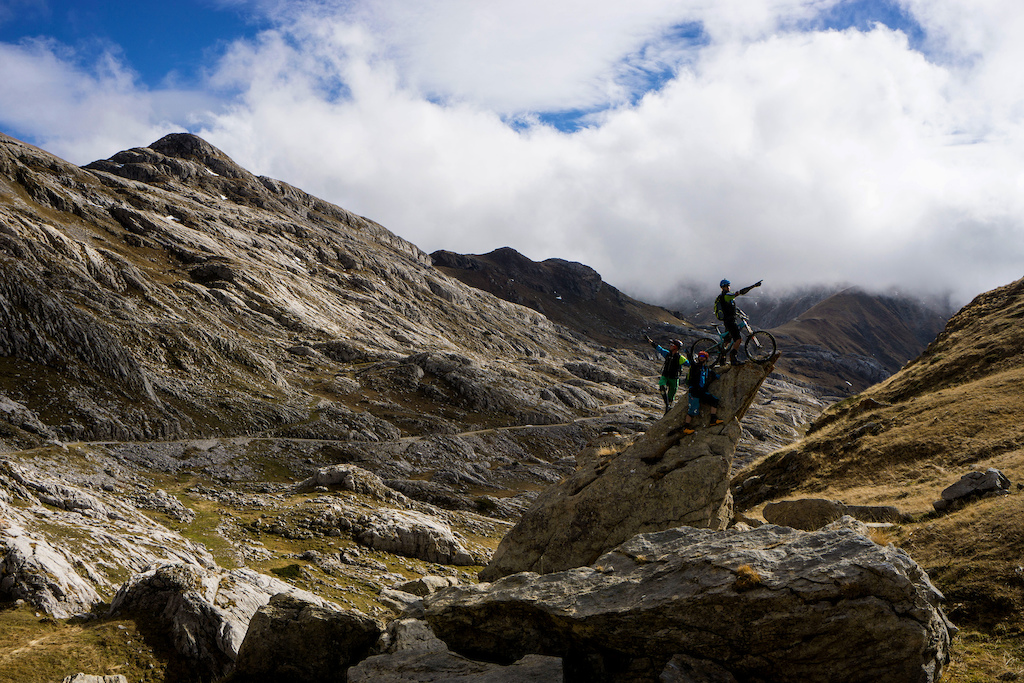 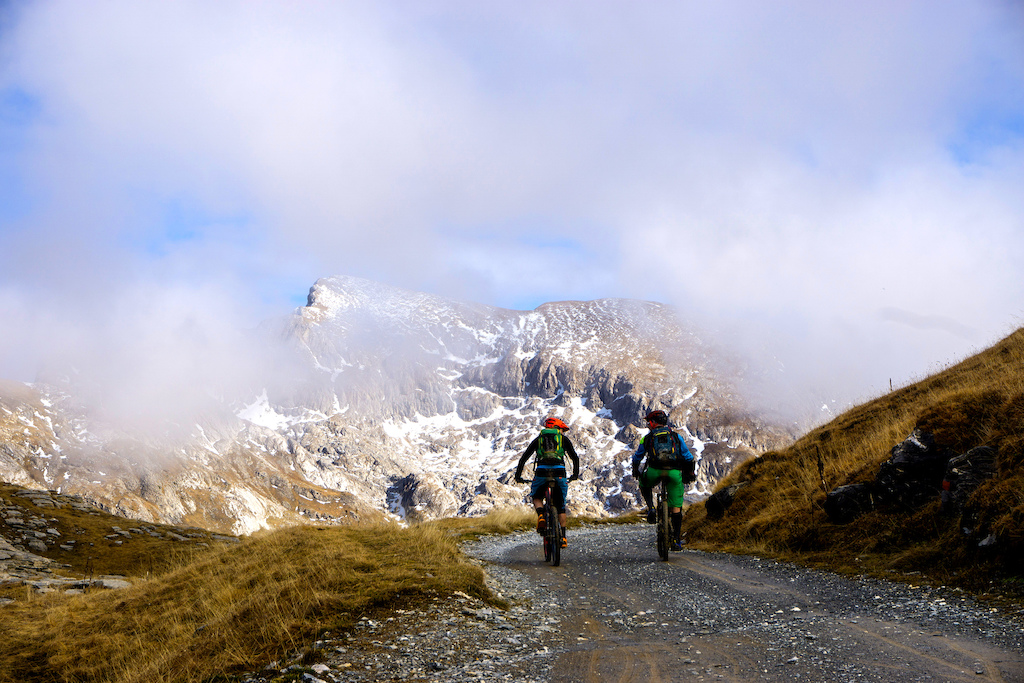 On tonight's menu we found the mouth watering 'Calves head cooked with the tongue'... I had pizza!

We were feeling a little tired so we opted for a long 4x4 shuttle up the mountain rather than the offered three hour climb. It didn't quite reach the top, leaving us with 200m to go giving us the chance to warm our legs up in preparation for descending the Molini classic 'Cop Killer', at over 10km long and roughly 1600m vertical it really is an awesome route. 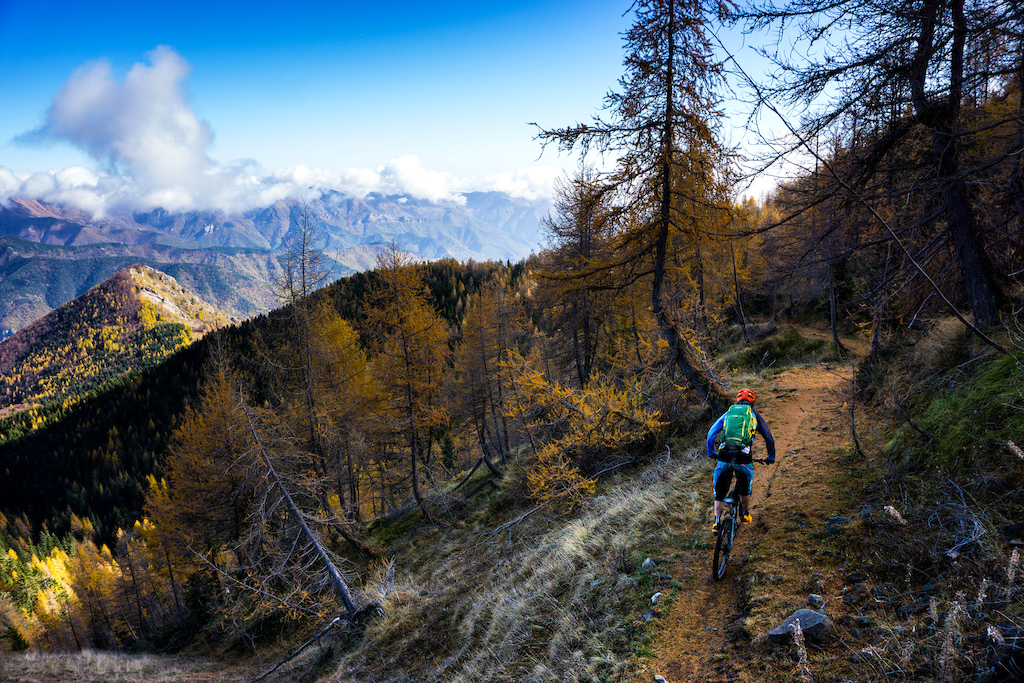 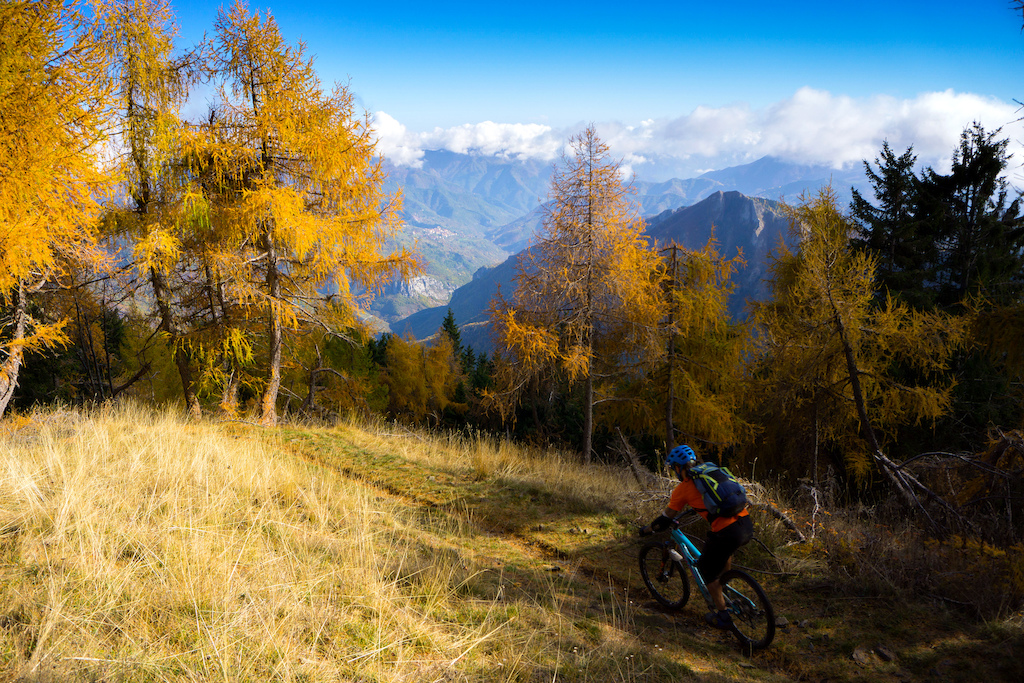 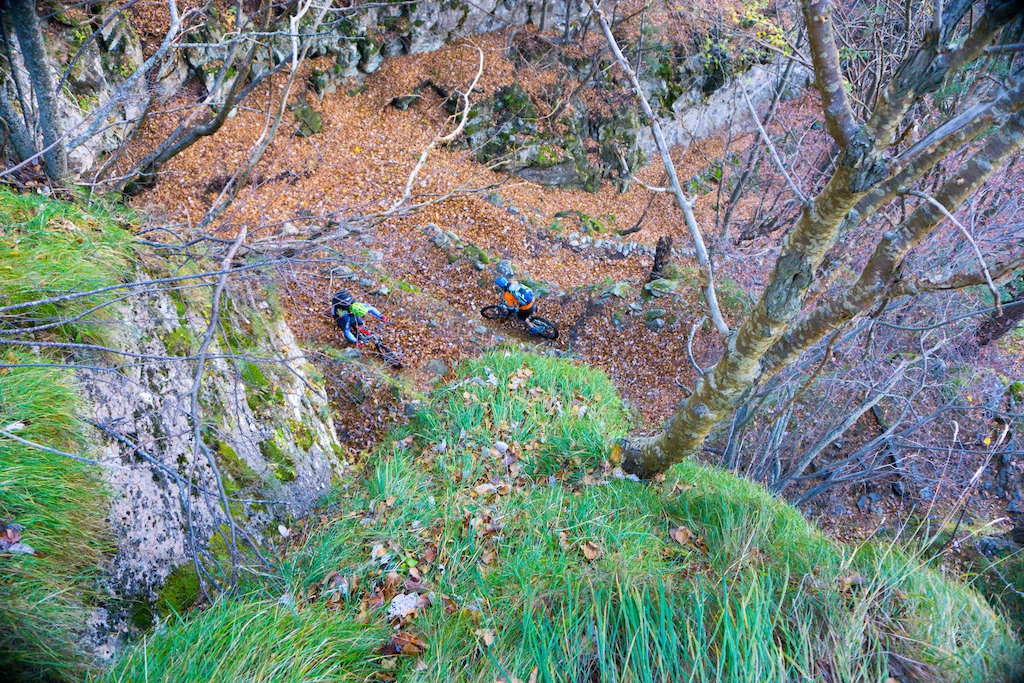 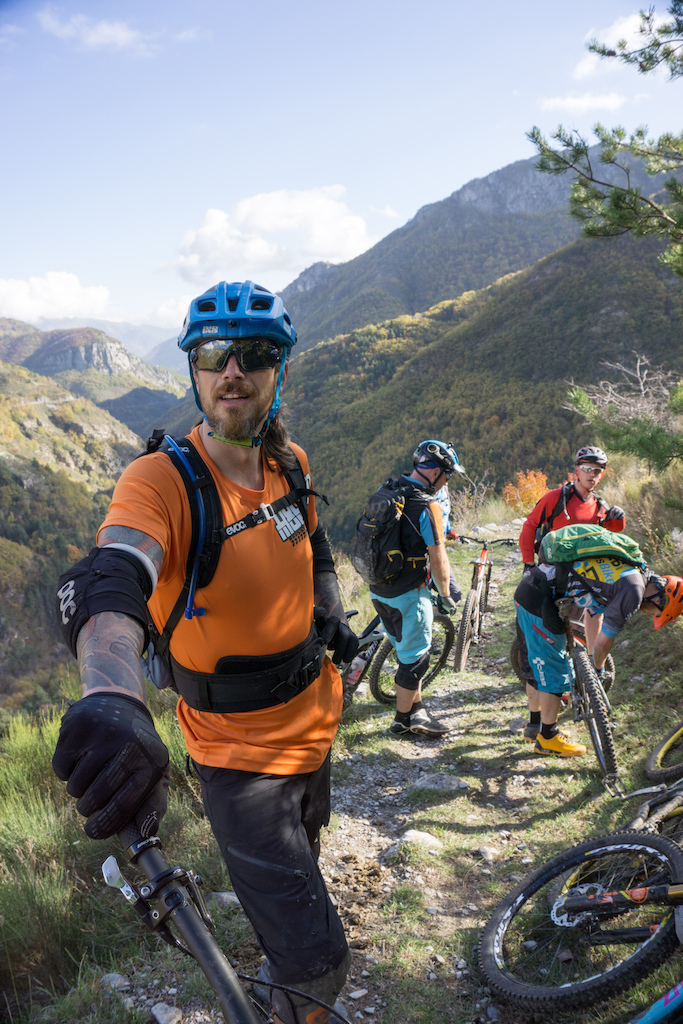 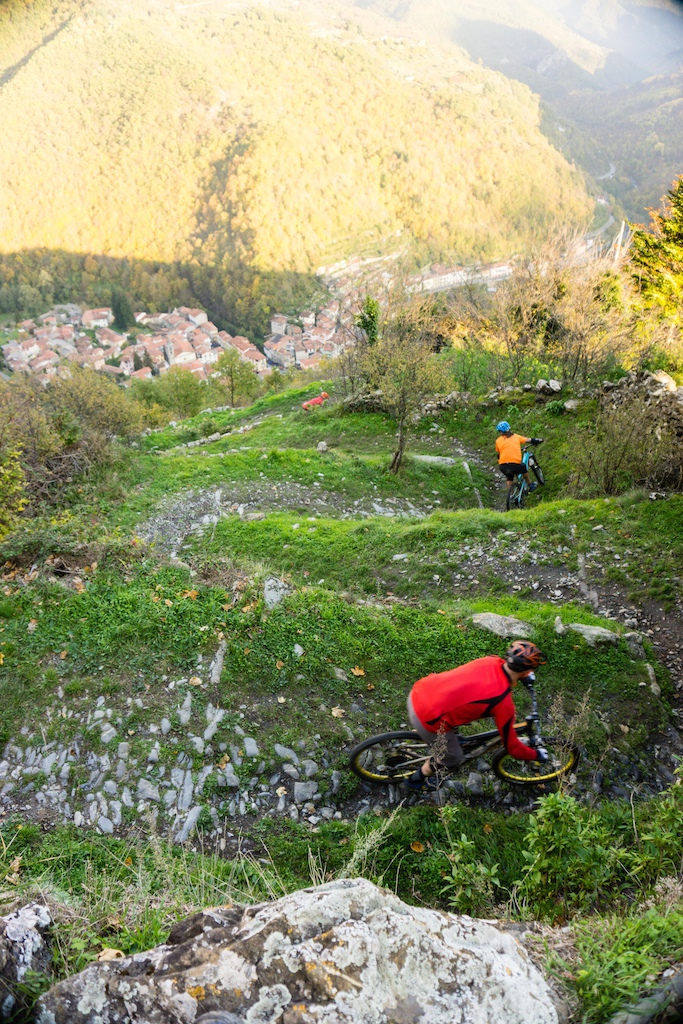 After climbing up to Triora for a late lunch we decided to use the day as the nearest thing to a rest day we would have and shuttled up to the top of the mountain above triora and had a last long descent into Molini and an early beer.

Day five started off high above Triora with a couple of hours steady climbing on more of the Napoleonic Fort roads that criss cross the whole of the Maritime Alps. The views here are stunning looking down the Valle Argentina towards the Med. 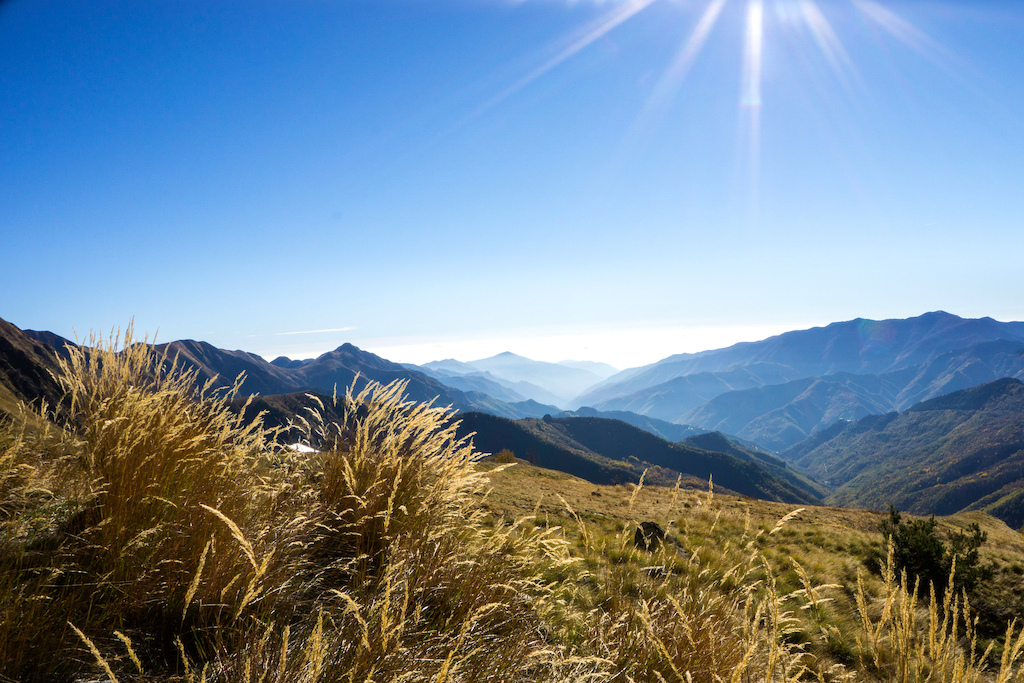 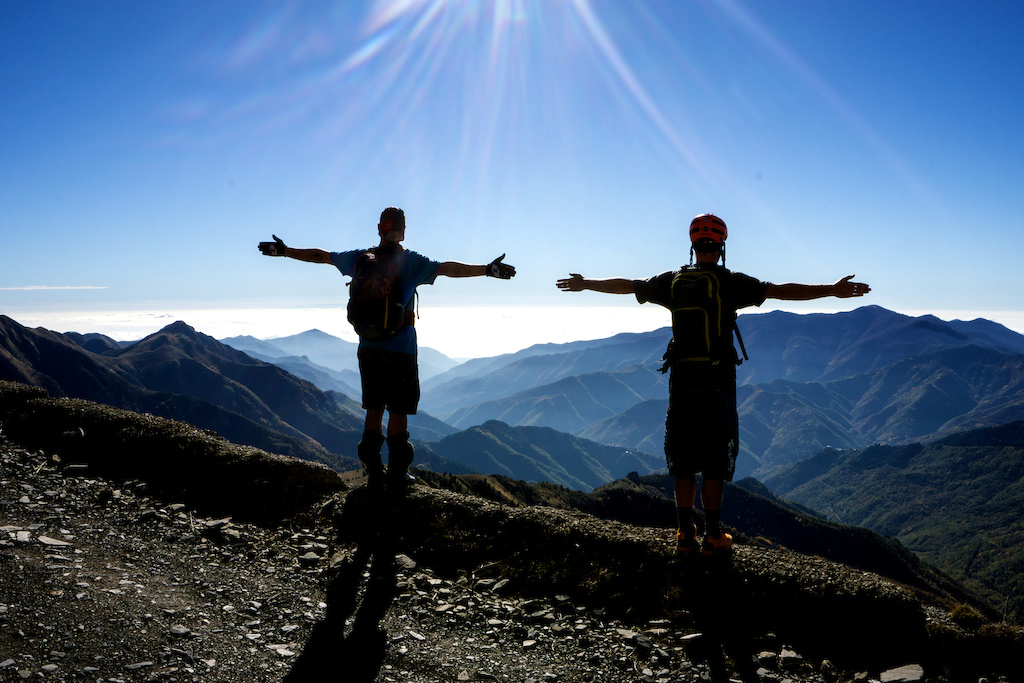 After popping through a tunnel through the top of the mountain we were rewarded with views over the valley and Nava our destination for the day. The trails in and around Nava are fantastic and we dropped down from the Col onto a trail that had everything from steep techy switchbacks to super fast tobogan shoots - again. 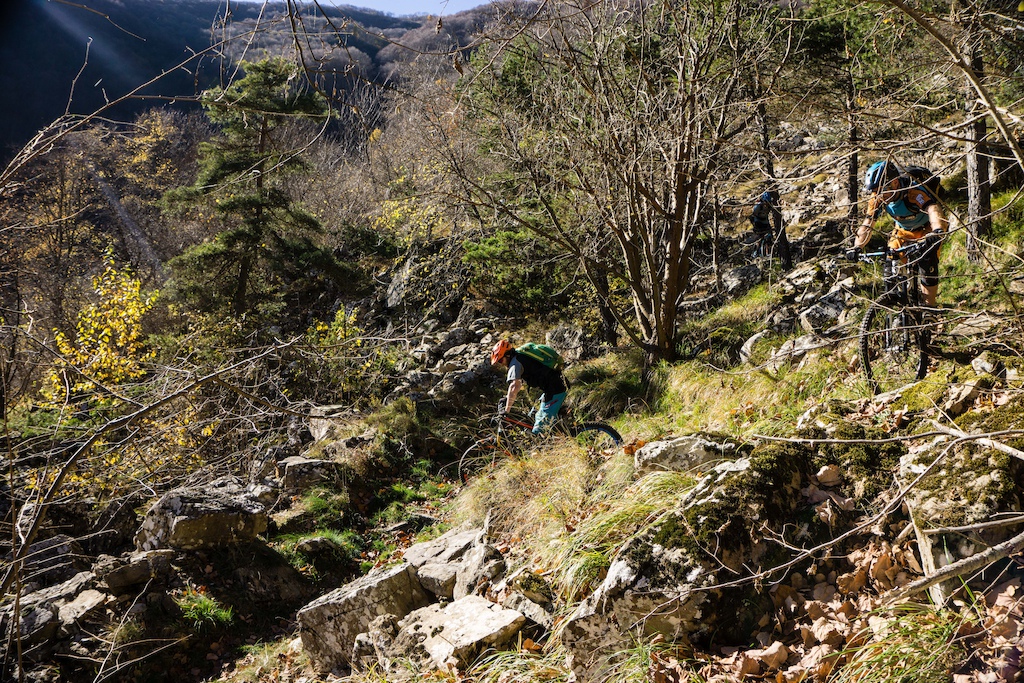 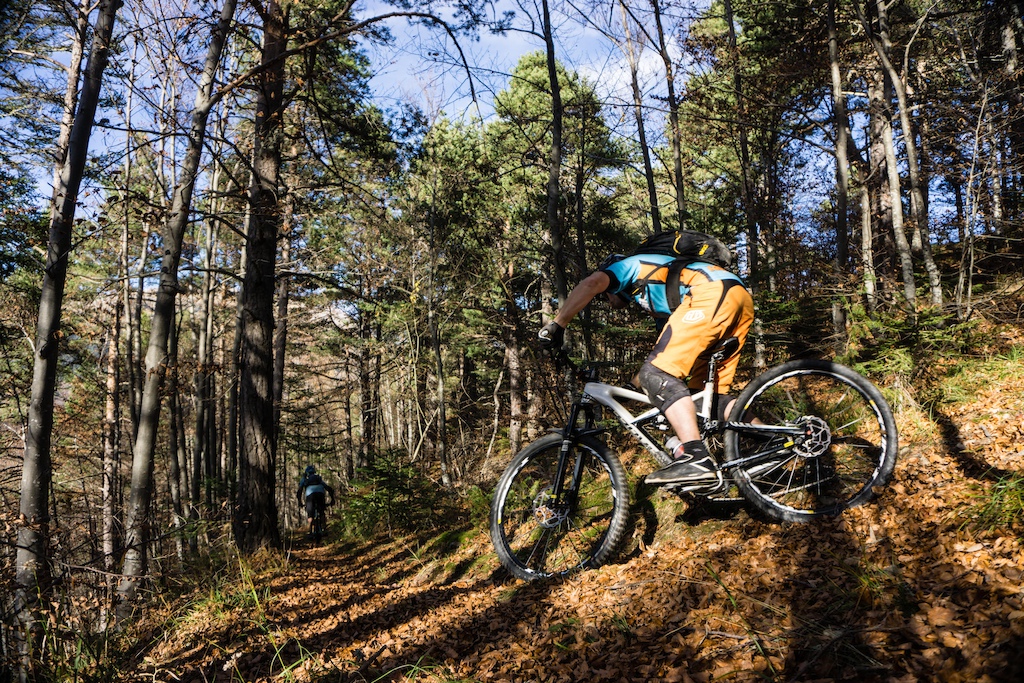 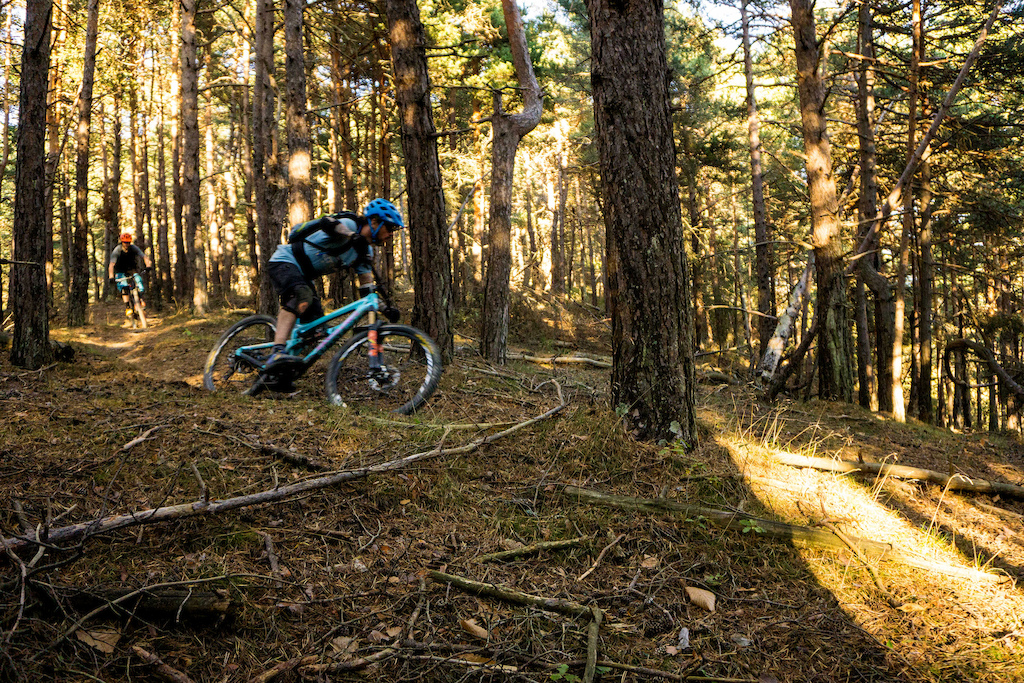 We re-ran this as a night ride, crazy!

After spending the afternoon doing a few shuttle runs another night ride was in order and we finished the day of with a top to bottom in the dark... From here it was up to the Rifugio Pian Dell'arma at about 1350m for one of the best meals of the week and a copious amount of wine.

Up at 7:00am for the sunrise, standing there in the crisp Autumn predawn air watching the sun come up over the Med with Tuscany on the horizon was breathtaking, well worth the effort of getting up early. 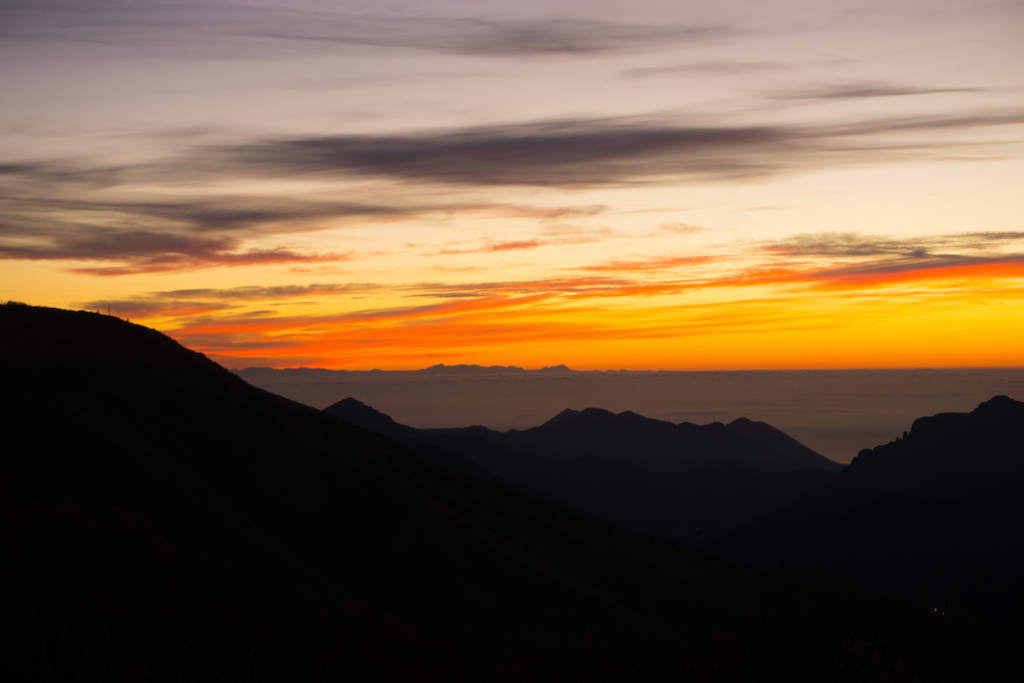 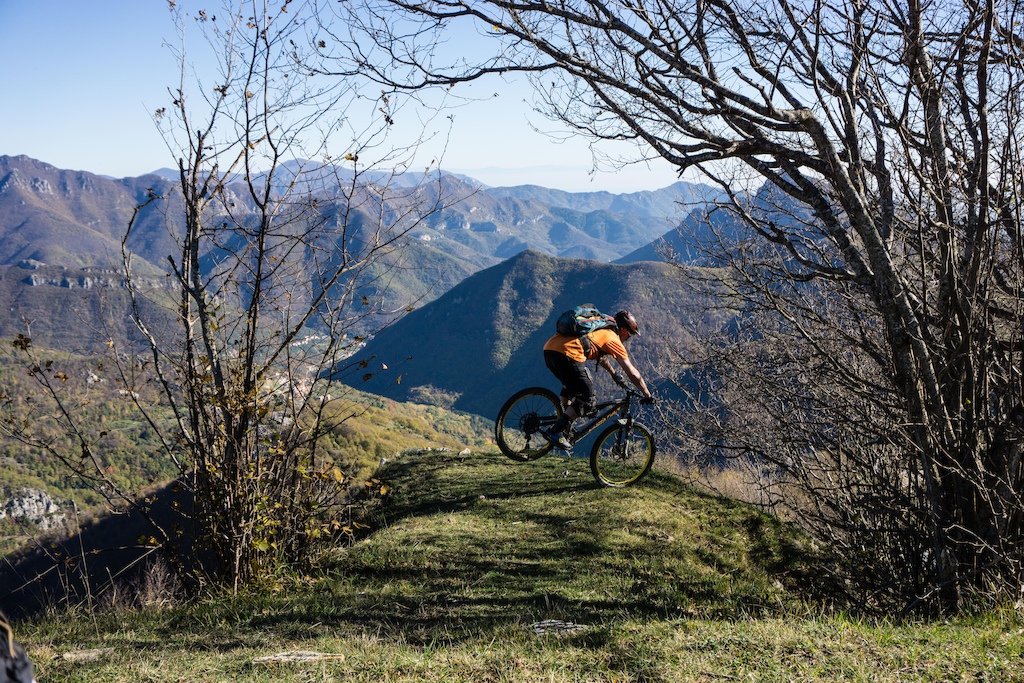 The day was supposed to be a 35km day following a ridge line all the way to the sea, all went well until roughly half way when the forestry people had been kind enough to demolish the trail. 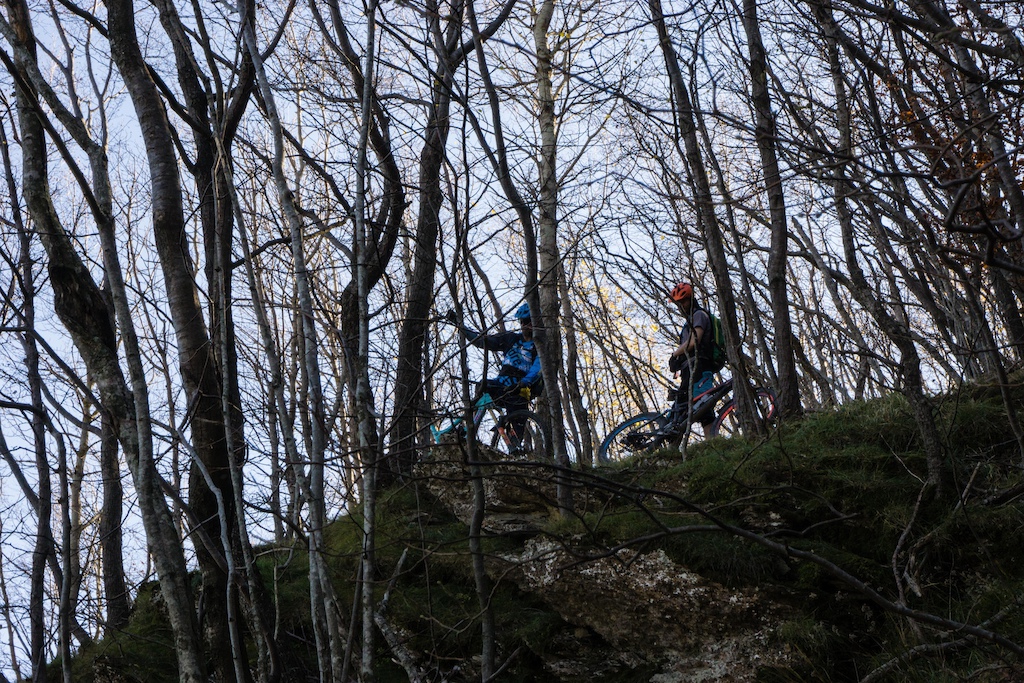 Once we found the route again we decided that we would cheat a little and liaise with the van for a cheeky uplift to the top of the last descent, a tasty 600m vertical drop from the mountain top finishing with some urban down to Imperia and the coast. 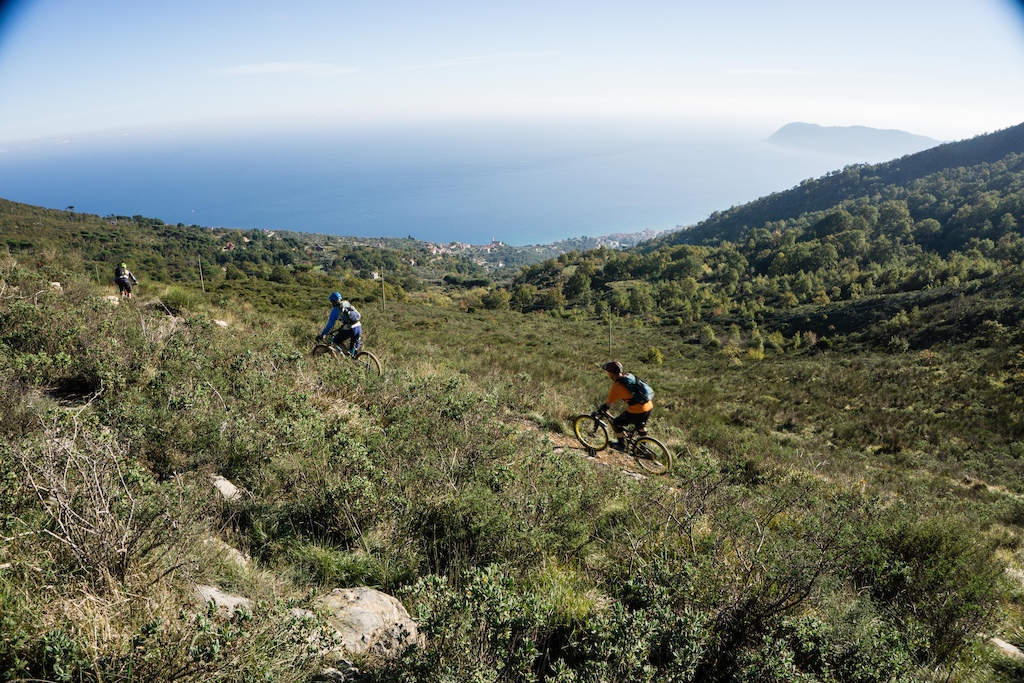 I can see the Sea! 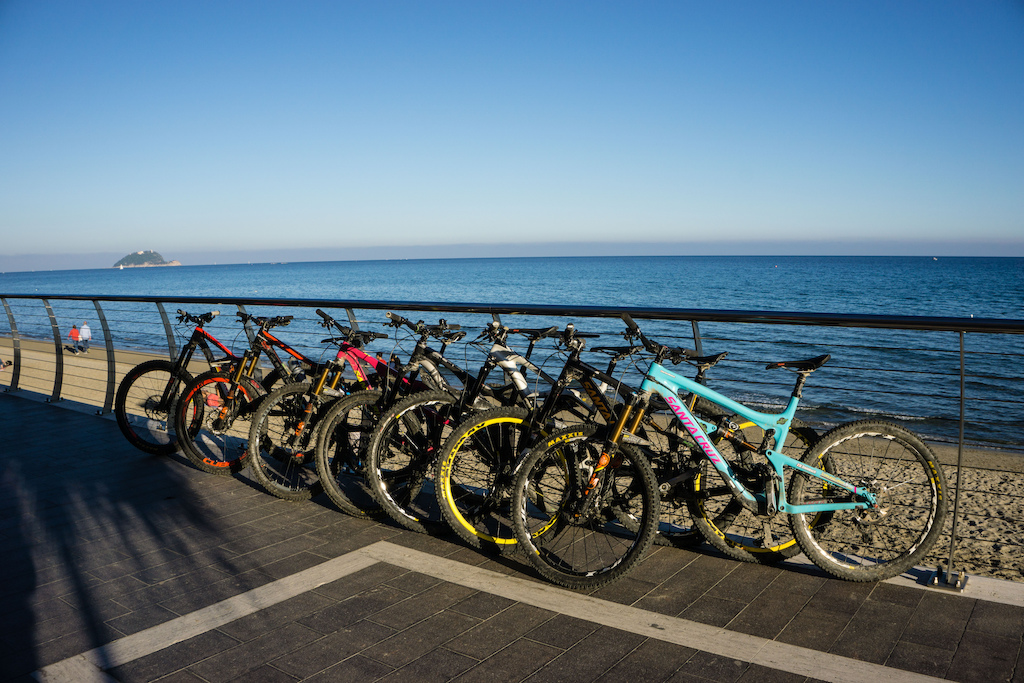 Time for a swim in the Med and a cold beer!

All in all and awesome week, some fantastic trails, horrendous weather, glorious weather, fantastic food, wine and mint people. Massive thanks to Adrian Nash of Rivierabike, Cristian Bianco for driving, Lou and Ale for the guiding at Finale, Northern Monkeys - Jason Steinbach and Jamie Vosper and the guest appearances from David Pickering, Peter Footitt and Joe Campbell aka the Southerners.

giopk70 (Dec 6, 2015 at 14:18)
The whole calf head is most probably testa in cassetta, which is really all the parts of a calf head boiled and seasonedand pressed in a cube but looks actually like a cross between ham and corned beef and is really delicious...