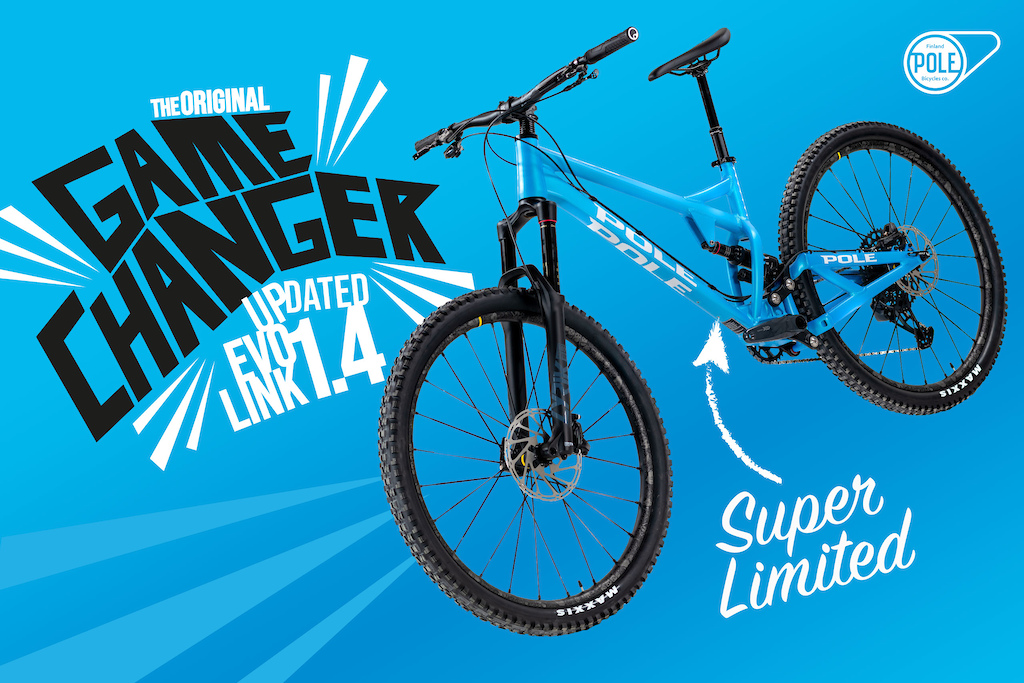 Five years ago, Pole Bicycles released the acclaimed Evolink 140. A bike well known for taking the cycle industry by surprise. Born out of frustration at an industry that only ever made incremental changes to bike design every year, Pole Bicycles took on the challenge of creating a bike to fit a growing need. The result set the standard for how a mountain bike should be – to get up the hill and back down again, fast!

Widely recognised as a bike that pushed the boundaries of the cycle industry and the beginnings of the era of 'new school' geometry, the new Evolink 1.4 retains the same fundamental Pole Bicycles ethos and remains very much long and slack. 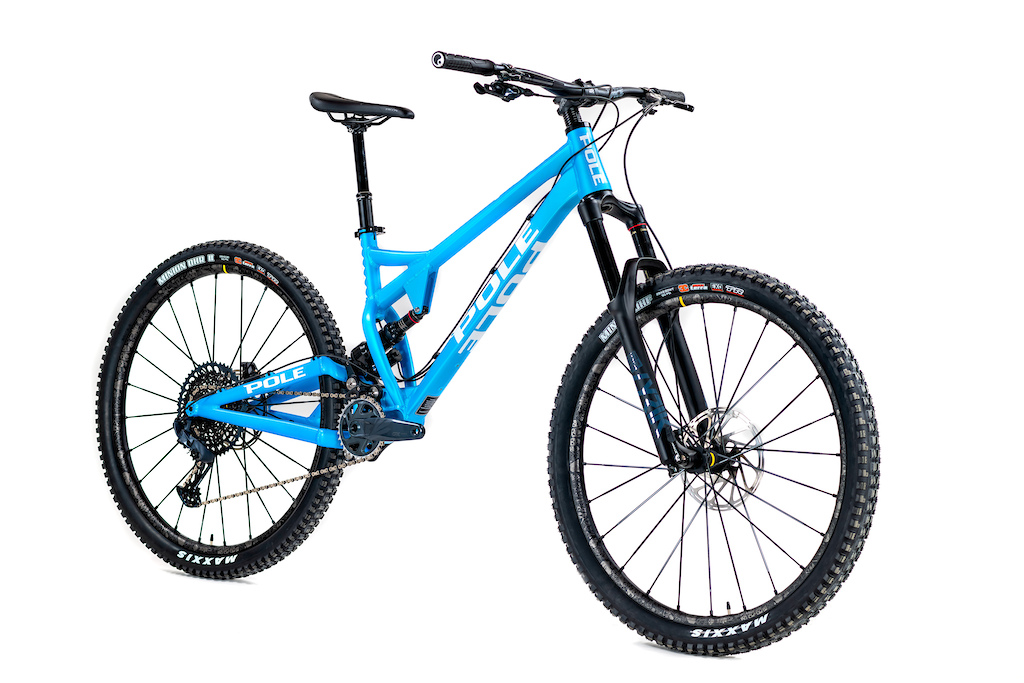 Sticking with the original numbers that made the Evolink 140 ground-breaking when it first launched in 2016, the 1.4 retains a head angle of 64.5° but sees the seat tube angle steepen to 77.6° (79.9° effective) from an original 76°. Reach and wheelbase come in at 497mm and 1304mm (size K2), and all bikes will continue to roll on 29” wheels to give the edge in performance over tough terrain.

A new size naming convention sees the original S, M, L and XL replaced by K1, K2, K3, and K4. On a bike with such progressive geometry, the question of best sizing for a rider is one that is often asked. Whilst including the inevitable rider height crossover, Pole Bicycles have created a size chart matrix to cover not only the rider's height, but also incorporate the rider's style. The result is a simple system for customers to best choose the bike size to fit their needs.

The bottom bracket height also increases from -20mm to -3mm but the overall stack height decreases across all sizes. Increasing the BB height has made the bike more maneuverable, fast, and versatile, whilst making cornering easier. This is done by allowing more room for the rider's knees to bend and letting the bike lean into the curve without a need to shift balance to either side as much. During testing, the lower the bottom bracket height, the more likely a bike tends to push up whilst cornering. A higher BB makes the bike easier to handle without taking away the straight line abilities - it’s easier to bunnyhop and manual.

The biggest change that all of these updates bring to the ride feel of the new Evolink is more progression in the leverage ratio. In the mid-stroke, the point in which a rider spends most time riding, is now set at an average leverage ratio of 2.67 compared with 2.52 of the previous Evolink 140 model. That equates to a 9% more progressive leverage ratio and in turn 18% more Anti-Squat.

Along with a host of specification updates, the frames and complete bikes will feature metric shocks across the whole Evolink 1.4 range which will deliver 144mm progressive travel to the rear end of the bike.

Leo Kokkonen, founder and designer at Pole Bicycles, said “In 2016 we launched a bike that, at the time, set a standard in the cycle industry for the 'new school' of thinking in terms of geometry and suspension design. Although many companies have made some progress towards adapting these ideas to their own ranges, the Evolink is still ahead of the curve when it comes to the adaption and implementation of modern bike geometry.”


Pole Evolink 1.4
He also added “We had a bit of luck with this one. With the simple addition of a 55mm metric shock, we’ve managed to update an already classic bike. Previously we didn't want to raise the BB too much without a proof of concept. During testing with another prototype, we discovered that the long and slack geo benefits from an even higher BB. The fundamental issue with the discussion around BB height is the same reason why bikes were so steep in the first place: engineers stuck to the old measurement from the ground to BB using 26" wheels.”

The Evolink 1.4 will be available as either a frameset only option or complete build. Frameset will have the choice of three shock options, a Cane Creek headset, a rear axle, and seat clamp starting from only 1690€.

A one-off Super Limited Stock Custom build will also be available, featuring Rock Shox Lyrik Select RC forks and a SRAM GX Eagle drivetrain. These will retail for 4450€ and, as the name suggests, will be produced in super limited numbers for 2021. 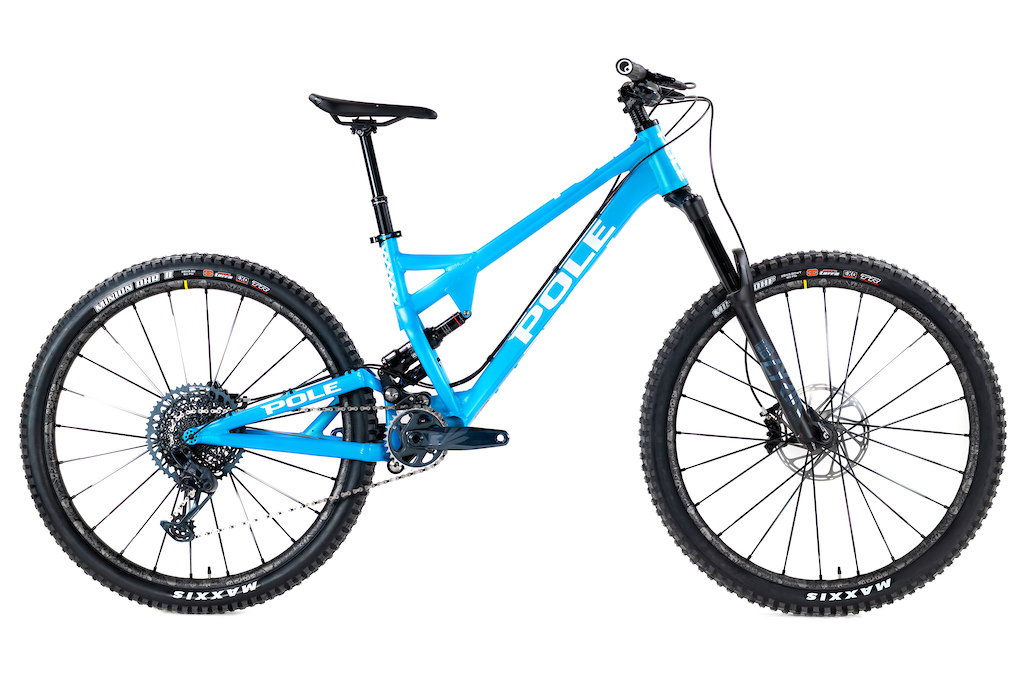 For all existing Evolink 140 V1.3 owners, Pole Bicycles is currently working on an upgrade kit to convert all V1.3 bikes to the new 1.4 version. The kit will include upper and lower headset cups (manufactured in-house in Finland) and either a Cane Creek or Rock Shox metric shock including all the relevant hardware. This will give current Evolink 140 V1.3 owners the chance to have all the benefits of the new 1.4. without updating their exciting frames. Dates and pricing for this kit are still to be confirmed.

Due to ongoing industry shortages and backlogs with components, numbers of frames and complete bikes are strictly limited on the pre-sale shipment and won’t be available for very long. Although, the estimated availability and shipping times for framesets and Stock Custom builds will be as early as June 2021.

Pre-order sales for the new Evolink 1.4 framesets and Stock Custom builds are now open at polebicycles.com