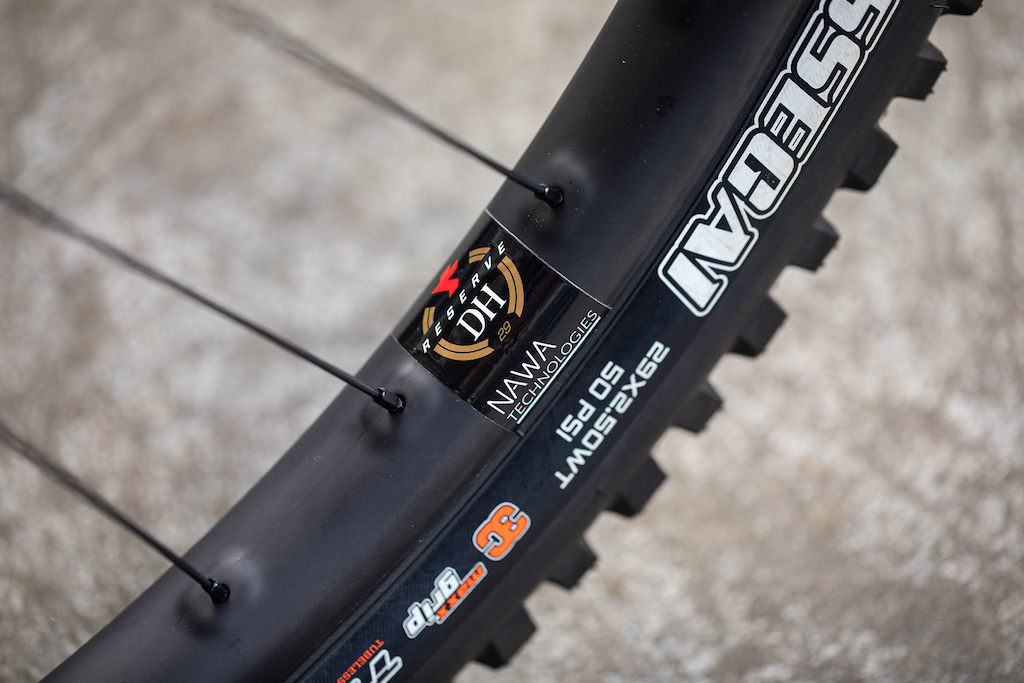 Since 2018, the Santa Cruz Syndicate have been racing and developing prototype versions of Santa Cruz Reserve rims that use carbon nanotubes to increase strength. The technology is called NAWAStitch and it's essentially a layer of vertically aligned carbon nanotubes in-between the layers of carbon fiber and at right angles to them. The idea is to "stitch" the carbon fiber layers together to prevent them shearing apart, or cracks developing in the rim. NAWA refer to this layer as "nano-Velcro". 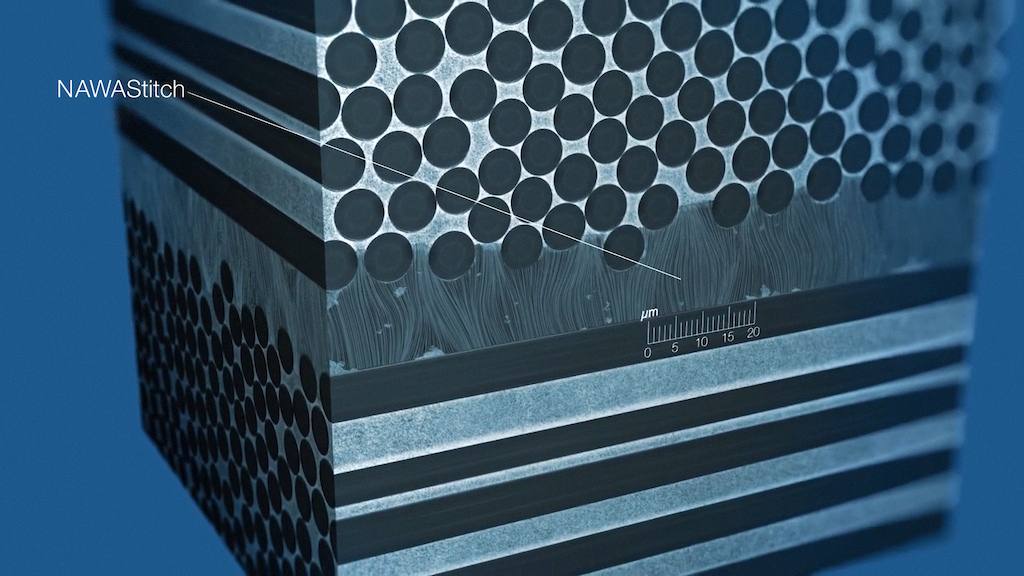 The nanotube layer holds together the perpendicular layers of carbon fiber to stop them shearing apart during an impact.
NAWA is a company headquartered in France with a second location in Dayton, Ohio. They use vertically aligned carbon nanotubes for ultra-capacitors, battery electrodes and carbon composites, like these rims. They claim that in their own tests, "NAWAStitch-reinforced carbon fiber composites have shear strength increased by a factor of 100 and shock resistance by a factor of 10." Apparently, this results in a rim that is "not only more resistant to strike damage... but has far greater shear strength too. NAWAStitch has the potential to dramatically reduce the number of wheel failures experienced by the team over a competitive season by 80%." 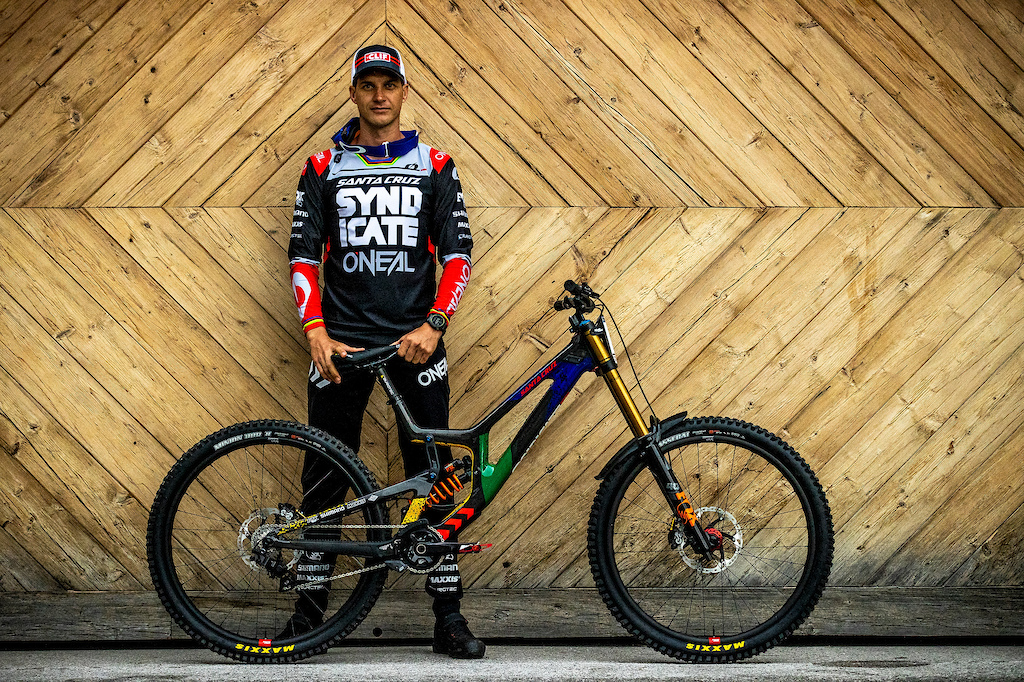 The Syndicate have been racing on the NAWAStitch-reinforced rims since 2018.
According to Nic McCrae, Senior composites engineer at Santa Cruz, "NAWAStitch has made the wheels much stronger, we believe by increasing the buckling resistance of the inner surface of the rims during high compressions [from an impact]... We’ve had far fewer wheel failures as a result. What’s more, NAWAStitch does not affect the way wheels respond to the riders’ inputs... our Reserve wheels are without doubt the strongest rims on the circuit."

The rims have been in development with the Santacruz Syndicate since 2017 and raced on since 2018. NAWA becomes an official "key partner" of the team in 2021.

The rims are competition-only for now, but the aim is to use NAWAStitch in mass-production Reserve wheels in the future.

fruitoftheloam (Jul 1, 2021 at 5:19)
Composite Unidirectional Nano Tube wheels would have been a much better name. Easily recognisable acronym, too.

DizzyNinja (Jul 1, 2021 at 7:56)
Pick a Directionally Integrated Composite and be a dick about it

JustAnotherRiderHere (Jul 1, 2021 at 9:21) (Below Threshold)
Also describes the attitude of many SC riders (and owners of the company)

raytheotter (Jul 1, 2021 at 4:47)
Can anyone remember when the Syndicate told us that an ENVE rim could last a whole season and then turned up to every race with a van full of spares?

Frontrange (Jul 1, 2021 at 5:18)
Lol! I’m especially laughing at all the comments about how strong they are for the public (except there’s more warranty reserves than any other carbon hoop in the local shop). Turns out the sponsored riders aren’t even riding the same wheel. No surprise.

conoat (Jul 1, 2021 at 5:41)
when you buy an enve wheel, the only thing that lasts forever is the email string with the warranty dept.

whitebullit (Jul 1, 2021 at 6:43)
@adespotoskyli: it was qualifying, but yes this article made me think they should of been utilizing said technology in the frames as well.

chakaping (Jul 1, 2021 at 5:20)
I'm sure they were very careful not to claim that it is. Hats off to DT for setting the benchmark at a relatively affordable level.

CustardCountry (Jul 1, 2021 at 5:33)
Well obviously these have ‘Nano’ in their name so they must be better because “science!”

whitebullit (Jul 1, 2021 at 6:47) (Below Threshold)
@chakaping: dt swiss cheese? i mean if you dont freeride or do downhill they might holdup, but fr510 is far from the benchmark around here. ex823 was the benchmark and then mavic realized if they keep making indestructible rims they wont sell enough, and we never saw a 27.5 version.

radrider (Jul 1, 2021 at 8:20) (Below Threshold)
You got issues if your still thinking aluminum rims are better than carbon. There is one single benefit of aluminum. And that is a cheaper starting price. Ive been through way too many aluminum rims in my life.. These Sram carbon rims haveny given me a single issue in 4 years now.. And feel hugely quicker than the old aluminums.

thenotoriousmic (Jul 1, 2021 at 18:28)
@whitebullit: you must be old also. Dtswiss haven’t made rims from cheese in decades but they were so bad back in the day that I can completely understand you not trying the newer rims.

Inclag (Jul 1, 2021 at 6:17)
All this effort to make carbon fiber to behave like an isotropic material. If only there were some alternative materials that exhibited a good combination of strength to weight and are inherently isotropic in nature....

carym (Jul 1, 2021 at 6:59)
That would require development of an entirely new material. They could call it metal.

tacklingdummy (Jul 1, 2021 at 7:39)
I head about this stuff called aluminum is supposed to be pretty good.

radrider (Jul 1, 2021 at 8:23) (Below Threshold)
Yikes. Not serious are you? Let me refer you to the santa Cruz carbon vs aluminum rim test. Anyone who watches that and comes out thinking metal is best surely needs a labotomy.

hardcore-hardtail (Jul 1, 2021 at 10:59)
The beauty of composites is that they are anisotropic, that means you can engineer them to have the properties you need. Plus carbon-resin composites have around 4 times the tensile strength compared to aluminum and almost twice as stiff, those are ideal properties for something that takes as much abuse as a rim. Finally, this is an amazing innovation because it opens up an entire new dimension of control over the fibers and matrix. There aren't many innovations these days that will affect engineering text books, this is one of them and it came from mountain biking! Amazing work Santa Cruz!

thenotoriousmic (Jul 1, 2021 at 18:29)
@radrider: that video is so fake it needs taking of the YouTube channel. It’s embarrassing. Go read the comments.

Almazing (Jul 1, 2021 at 5:42)
I like how their race teams got this fancy strong version while the rest of us peasants got the ones they claimed were the strongest in the known universe but had the most warranty claims. Keep it up SC.

Afterschoolsports (Jul 1, 2021 at 6:03)
At work we’ve been using similar technology in our aerospace structures for a while now. Primarily in our huge 5m wingspan drone that has a modular monocoque fuselage. It allows us to cut down noticeably on material at those locations.

audeo03 (Jul 1, 2021 at 8:43) (Below Threshold)
But, what is the environmental impact of these materials post production? During production? What is the impact on the workers during fabrication?

Afterschoolsports (Jul 1, 2021 at 10:02)
@audeo03: post production is a challenge, but it’s a challenge for all composites so it’s not unique. The smaller quantity used alone reduces the footprint during and after manufacturing. We have very little wastage of either off cuts or QA failures. We’re saving it all up until we either acquire pyrolysis facilities ourselves or have a container full to send to an external facility.

Our consumables are minimal as we now have reusable vacuum bags and breather has virtually no reuse limit. Our composites guys are well catered for PPE. The air is changed via hepa filters many times per hour. We use a prepreg process so they’re not exposed to the same quantity of chemicals as a vacuum infusion or wet layup scenario. The first time a (gloved) hand touches a ply is when it comes out of the plotter. There’s also a vacuum trimming and finishing station that prevents contact between workers and dust generated during those steps.

The boss’s father in law died from asbestosis, so we’re pretty fanatical about OHS here. I am a systems engineer and even though we don’t do much soldering on-site, we have a really elaborate ventilation system to prevent any lead or flux fumes from getting into our bodies or the environment. Same goes for the paint shop.

All electricity consumed on site is generated by solar panels (80%) and multiple micro wind turbines (~20%), feeding into a huge battery bank. All water used on site is collected from rain. The bitumen and even a good proportion of the concrete used to build the site was recycled. We’re a pretty small company, so it’s relatively easy to have a minimal negative ecological and social/community footprint.

lalligagger (Jul 1, 2021 at 6:55)
I don't know who needs to hear this, but at my first space startup we got so sick of hearing about all of the magical possibilities for CNTs that we needed a codename for them. Not for secrecy, but because we were all so goddamn sick of hearing about carbon nanotube space elevators or whatever.
We called them... "Bourbon Cantaloupes". Why I don't know, that was before my time.

viccuus (Jul 1, 2021 at 8:24)
I got MS doing research on Carbon Nanofibers. I came from a physics department that specialized in studying carbon nanotubes. They were supposed to be a miracle material that was going to revolutionize circuits, and composites and energy storage, and pharmaceuticals... 20 years on, all that research, and what do we have for it? Rims. Some reinforcement in composites. If this is actually a real use, I'm glad, but it looks more like some warehouse/startup in Washington bought in big on CNTs back in the day and has finally been able to peddle (badump tush!) them off to yet another generation of marketing hacks.

bendy12345 (Jul 1, 2021 at 5:24)
Fun fact for you all, F35 fighter jets use Carbon Nanotube Technology in their construction and have already been around for a number of years.

patdinho (Jul 1, 2021 at 5:08)
CNTs are often used in in-plane aligned sheets, these are aligned out of plane relative to the fiber directions.

csteffens (Jul 1, 2021 at 5:20)
It seems like this is a much more nuanced application than what Zyvex was doing for Easton. If NAWA can get the nanotubes in the resin to "stand up" in an organized manner - perpendicular to the fiber axes - that might improve the shear strength of the bonding surface.

commental (Jul 1, 2021 at 6:37)
@patdinho: CNTs are often responsible for misleading marketing claims about the strengh of their products

patdinho (Jul 3, 2021 at 7:23)
@commental: CNTs are great, don't blame the CNTs. Blame the people who don't know how to use them and market them as if they do. Mountain biking is full of competing things...everyone complains that wheels aren't light enough, then they complain that the wheels break. Same with frames and everything else. Composites have never been a problem in the bike industry, the problem is that up until recently no one has really utilized composites intelligently. We have a long way to go, but Santa Cruz is starting down a path that makes some sense and we should be stoked about that, we shouldn't balk at it. Keep in mind this is coming from someone who has broken 8 Reserve wheels over the course of 3 years (SC warrantied all of em)...nothing is perfect nor will it ever be.

Snfoilhat (Jul 1, 2021 at 5:17)
Reuse is better than recycling, all else equal. It's good to see longevity get more emphasis in the discussion of high performance stuff

Admiral-Hipper (Jul 1, 2021 at 5:17)
What?! What about the Danny mac video. I thought these don't break already. *Snickers and rolls eyes

barp (Jul 1, 2021 at 8:42)
There's been a lot of fanfare about how carbon nanotubes are going to change the world, but this is the first application that actually has my interest. More of this and less of nanotube-infused tire sealant, please.

Pelmenium (Jul 1, 2021 at 8:29)
it's awesome! hats off to sc implementing new techology to improve bikes. cannot understand how this makes people angry.