The Strive Diaries: Entry 1 - EWS Round 1 in Chile 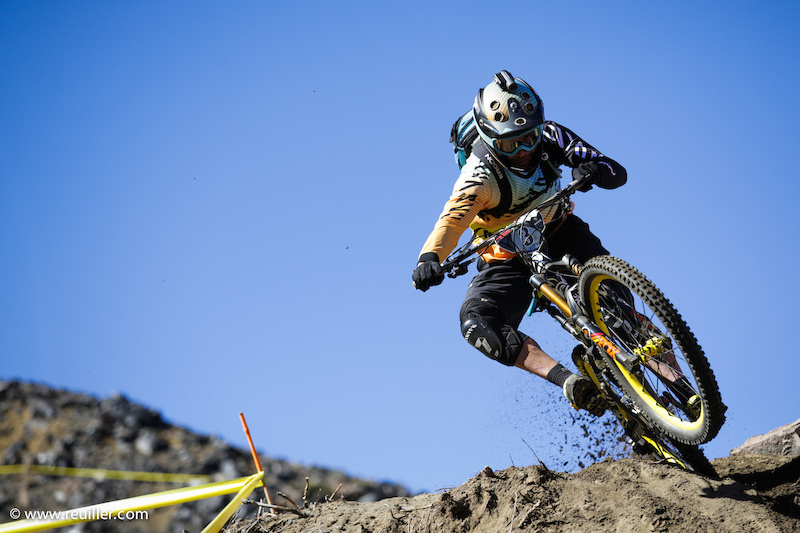 With the Strive Diaries we hope to capture the wide range of experiences, events and emotions that the Canyon Factory Enduro Team goes through. Just focusing on the good times doesn’t cut it, you’ve also got to reflect on when stuff doesn’t go right, and in some cases, badly wrong. The lives of high-level athletes are full of ups and downs, which is exactly what we want to expose. In this entry, we could bang on about how amazing it was to race in Chile with its incredible terrain and the support we experienced, but to do that would ignore the setbacks, and near disaster we had along the way.

Travelling to Chile was a complete step into the unknown on a number of levels. Despite being a bit of a logistical nightmare, nothing could prepare us for how how diverse and dynamic the riding scene is over there. People in Chile are absolutely mad for Enduro - some European countries could really take note. It was immediately clear to us that with a fan base like this, the country had truly earned the right to host the first round of the 2014 Enduro World Series (EWS).

The Canyon Crew was rolling deeper than usual to get the most of our time on the other side of the world. We spent build-up to racing doing film and photo shoots with the Andes as a backdrop, as well as training. Having got the shots we were after, it was time to really get to grips with the terrain at the warm-up race, “Montenbaik Enduro 2014” in La Parva. Just like us, it was clear that our competitors had also been putting in the hard hours over the winter months. Fabien finished up in fifth place, while Ines got onto the podium with a fantastic effort by taking third. 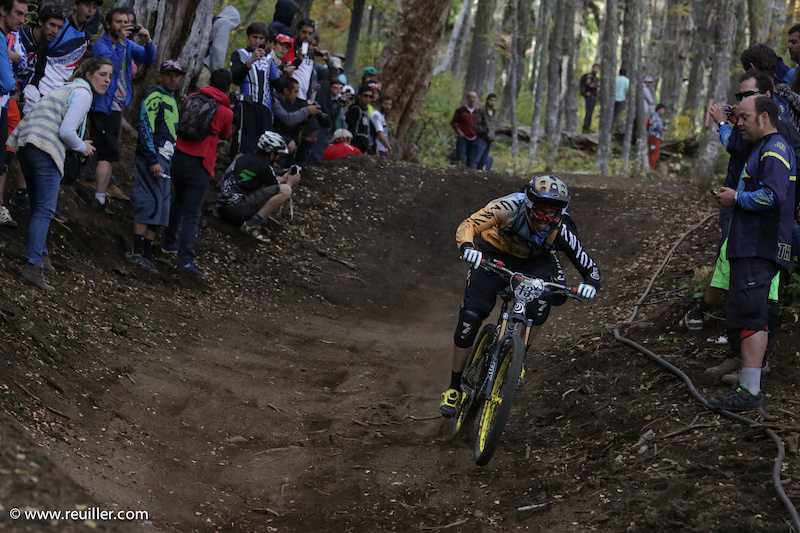 Our Swiss newbie, Ludo May, couldn’t wait to get his first ever race in CFET colours underway: “Coming here to Chile was the first real trip I’ve done with the team and it feels great having a mechanic and manager at my side. I really felt this support, it’s like being part of a big family. Unfortunately a small mechanical held me back, but I’m still happy because I had good stages, which makes me confident for the EWS.”

After a solid performance by the guys drifting their way through “Antigrip Country”, we felt good on the five hour drive south to Nevados de Chillan, with everyone super keen to get EWS 2014 underway. Thursday and Friday were spent trying to get as much practice in on the course as possible, while the real action kicked off at the weekend, with six stages spread over Saturday and Sunday. Time was tight for everyone. 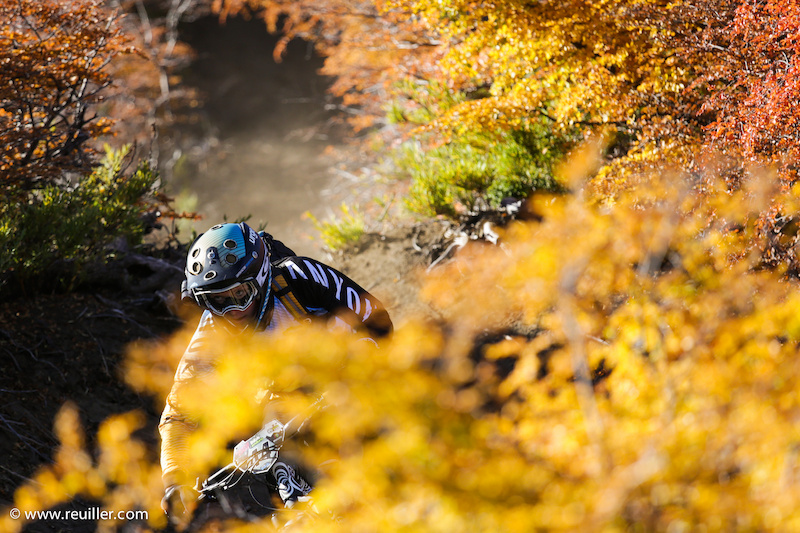 Like all of us, Ines was feeling it before the race: “I was a bit nervous to be honest, but I think everyone else felt the same. You never know what’s going to happen, even if you’ve done thousands of races before. Being here is something else though, the trails are super fun to ride and we’ve got great weather so I’m happy!”

Even after the very first stage, it was clear that racing will be super close this season, with the rookies mixing it up with the big guns. Then Fabien came across the line. It was clear something was up and everyone looked on with concern etched on their faces. What the hell happened? 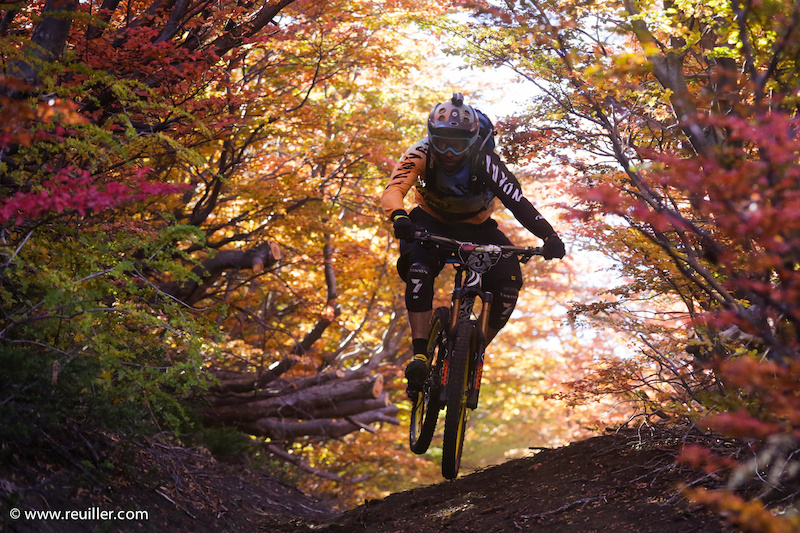 Despite that crash and unaware of the damage he’d done, Fab still fought to the finish of day one: “I am not sure I should start it this way, but what a day. I did not expect the first day, the first stage happening this way. I started the first corner like a 15 year old kid, ripping the sand full speed, drifting, bunny-hopping the ruts of the others. A feeling where confidence makes you believe nothing can happen. An excitement that even after 20 years of racing, I cannot control... Half way down the track at 40km/h flat out, I go over the bar, face plant my head in the sand, bend my back like it shouldn't and fall 5 meters below the trail. It took me 10 minutes to get climb back up my back hurt so much. I could barely move. I managed to go back on the bike and cross the finish line and go direct to the medical staff. After a long check, I decided to start the liaison to go to the second stage anyway... Should I have pushed today for a couple points? Are the risks worth it? Should I ride tomorrow? Did I plan the first round this way? All questions without answers but the only thing I know, is that I am here to ride my bike and give my best to compete. One knee on the floor does not mean that you are out... I would say, don't ever give up!”

It was an incredibly difficult and emotional decision to make on Sunday morning, but Fabien could go no further. As it turned out, it was absolutely the right decision. A proper check-up and scans in hospital that afternoon revealed that he’d broken his back at the 8th dorsal vertebra, coming within a hair’s breadth of being paralysed below the waist. It’s definitely at times like these that any thoughts about riding and racing take a backseat. We all realise just how close we came to absolute disaster.

Back on course, Ludo made a big impact in his first ever EWS race by finishing 13th. Meanwhile, Joe had great pace but was struck down by a flat tyre, which dropped him down to 25th. 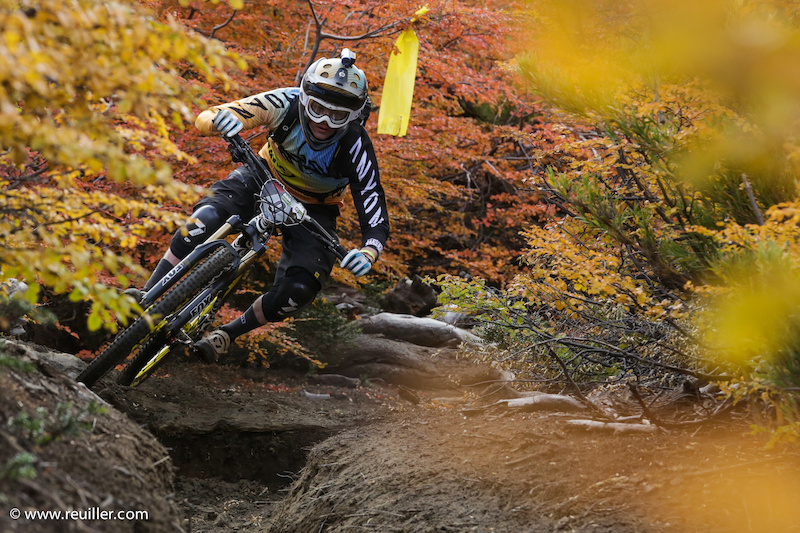 The Top Chief had a blast nonetheless: “My first race of the year was an amazing one to start with bringing us all the way to Chile. All through practice we would ride a stage and think it was the best thing ever and then move on to the next and think the same thing again. So much fun to be had in them Chilean hills. I took it easy in the first stage as I knew the year was long and felt comfortable on my bike. After this I was ready to attack in the longer more physical stage 2. This stage came good for me with an 11th place finish. Day one was good but with my casual start I still felt that I had more to give and so was excited for the bigger, and possibly better second day of racing. Stage 4 was a really flowy, fast and definitely loose trail. I pushed a bit harder where I could and came away with a 5th place finish and a personal best stage finish that helped me climb in the overall positions. Stage 5 became tight and technical and what I love riding at home in Scotland so excitement levels were at an all-time high. Unfortunately after galloping through a rock garden a bit too keen my front tyre started to lose air and was soon completely flat with half the stage still to go. I rode as fast as I could but lost a good amount of time to my competitors.

This was a huge disappointment for me for the first race of the year and first of the EWS series. I finished 25th in the end so still got some points but not where I really want to be. The fun I had over the whole weekend has made me keen for more and can't wait for the second round coming up. Just going to take it easy in them rocks…”

It’s with mixed emotions that we look back on our time in Chile. Feelings range from being “totally stoked” after riding such incredible terrain and seeing the enthusiasm of the Chilean fans, to disappointment with our results, to complete shock following Fab’s crash. Heading back to Europe, we’ll regroup and be ready to go again at the Riva BIKE Festival in Italy.

Thank you very much for all the “get well” wishes we have already received for Fabien. We have to be patient and wait for further examinations, but like all of you, we hope to see Fab back on the bike as soon as possible!

anyexcusetoride (Apr 23, 2014 at 12:41)
That was really quite scary to read about Fabien! What a mad man and lucky man to be still ok. I am sure it comes from many other riders but massive encouragement on the recovery and hope he is back in a good way as soon as possible!

slyfink (Apr 23, 2014 at 12:55)
can you fill us in on what Fab will be going through next? can he fly home for treatment? will he need surgery? what is the prognosis? I'm not trying to pry, I'm just curious because I am a big fan of his, and I honestly hope he gets well soon. Bonne chance Fabien, j'espère que tu consacreras autant d'effort et d'énergie à la rééducation qu'à la course, et qu'on te reverras sur ton vélo bientôt. bon rétablissement.

Cide10 (Apr 24, 2014 at 11:26)
Great report. Have a canyon myself so may be bias. More importantly best wishes to Fab. Legendary rider and guy. never nice to see anyone injured. Hope he has a speedy trouble free recovery and thoughts are with him. Kinda know how he feels as smashed my back and needed surgery but am back riding now (well I was til I broke my wrist 2 weeks back - something tells me I crash too much lol).