The Strive Diaries: Entry 5 - EWS Reborn in the USA 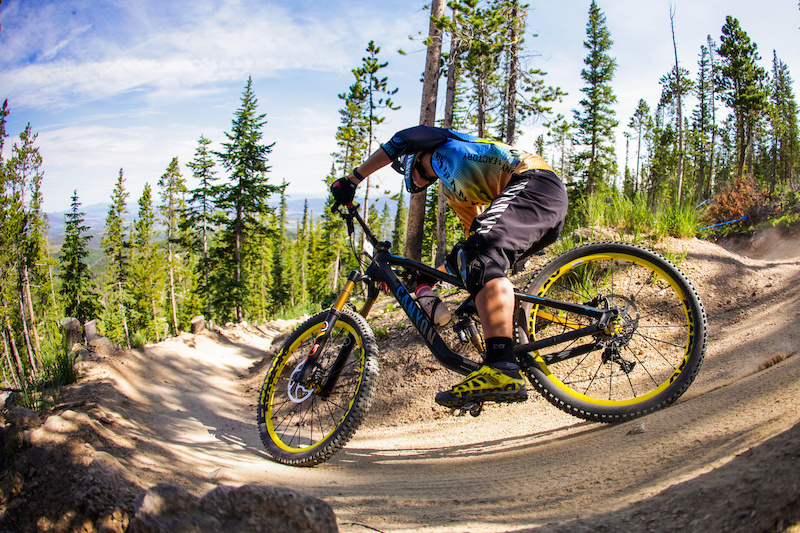 With a block of European racing behind us, the Enduro World Series headed stateside to kick off the final three rounds of the season. Winter Park in Colorado lies right at the heart of the Rocky Mountains and was familiar territory for the EWS having also been visited back in 2013.

After a rough time here last year, we’d learnt from our mistakes by flying over a week earlier to help combat the eight hour time difference, but most importantly to acclimatise to the altitude. Although the mountains around Winter Park don’t look much like the soaring peaks of the Alps, the fact that the base lift for Trestle Bike Park sits way up at 2800 m above sea level meant that we were actually far higher than at any point in Europe, and that was before we’d even got to the top. Coping with the thin air was therefore one of the major challenges everyone faced; even just sleeping at this height, your heart beats twice as fast than at sea level. This meant that the locals would definitely have a home advantage. 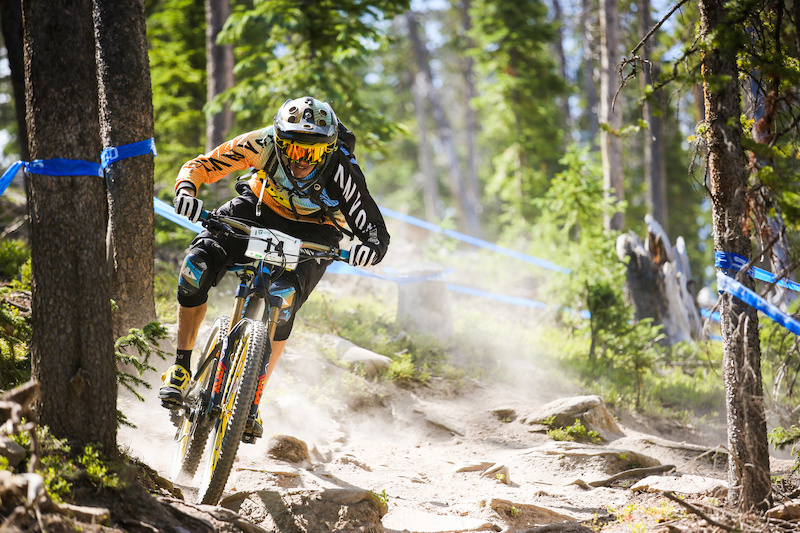 In contrast to previous rounds, this time we had three and a half days of racing with seven special stages ahead of us. Timed runs were held in the morning to avoid thunderstorms later on and the next day’s stages were only unveiled the afternoon before with practice allowed following the announcement. This made each day long and intense for riders and staff, but especially for our mechanics, Dougie and Marc.

Day one was spent lapping the bike park. Typically in the EWS, the riders aren’t so used to constantly hitting groomed doubles, berms and wallrides, and that was reflected in the results. While the big names were scattered throughout the field, the local riders, who could have ridden the course blind were filling out the top spots. Joe still had reason to be happy after the first test:

“I was 30th in that first stage last year and coming in 17th this time is a step in the right direction. Stage was good, but my stomach was playing up a bit in the middle. Strange feelings... Coming to a big jump I hit it longer than I did in the training run. I landed hanging off the bike like a motocross racer, but it was perfect. I was really stoked riding down afterwards. It’s really tough out there.” 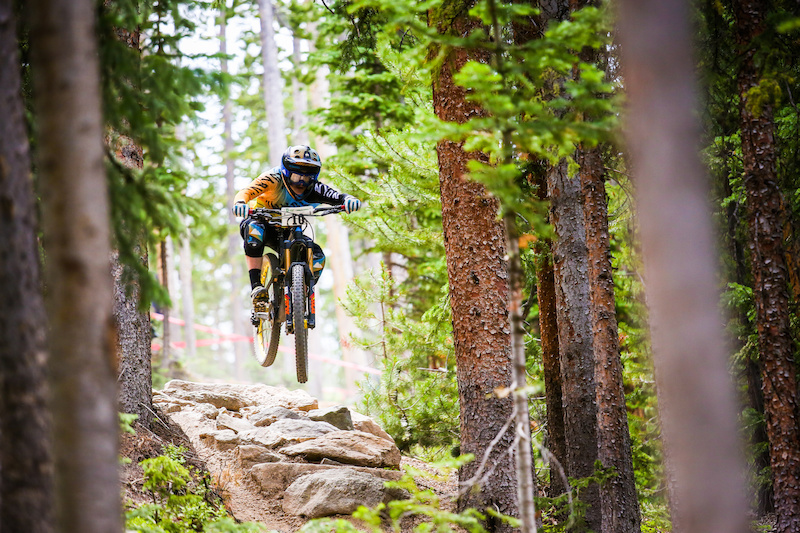 Day two promised more variety with a load of previously unknown and unridden hiking trails away from the resort. However, Ludo wasn’t loving the lack of flow offered by the terrain:

“Stages 4 and 5 were really short, like even less than two minutes so that’s also what we’re not really used to racing. Those hiking trails are dusty and really tight at the top - not really made for riding. Through the trees it was really difficult not to catch your bars. It’s really flat, not what I prefer and it´s definitely not sexy, but I guess that’s just the American interpretation of Enduro.” 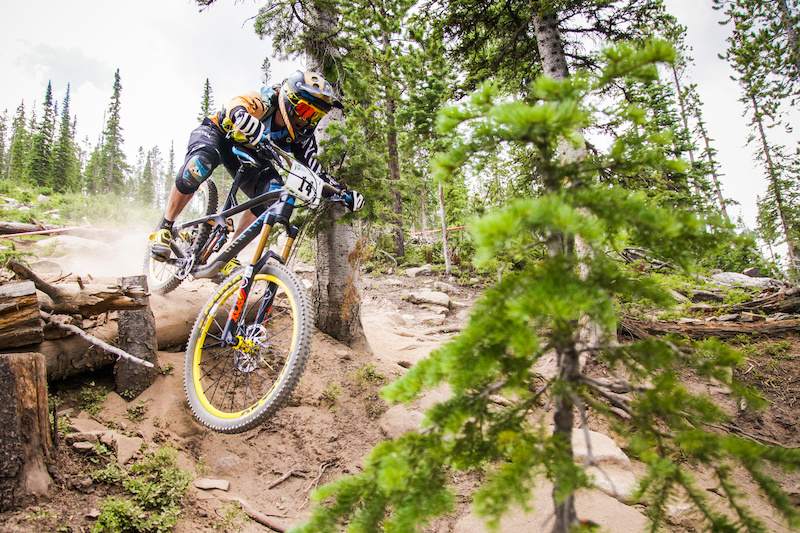 Coming in to the third day there was controversy after one of the local women came down hard on Stage 6, meaning the course had to be shut down. There’s never a good time for a big crash, but the accident happened after 10 men had already completed the stage. Chris Ball, who runs this whole show, had a tough decision to make and rightly decided that a re-run of the stage was the fairest way to continue the race, triggering protests from those who had already put times on the board. 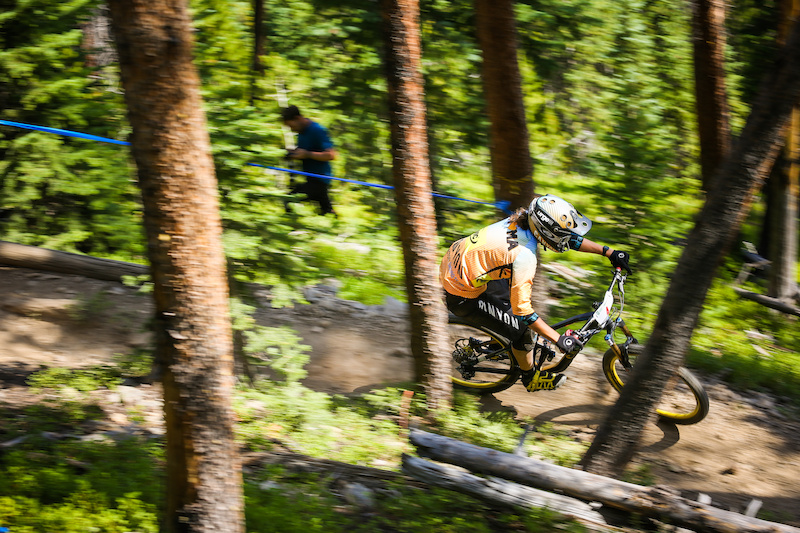 Fortunately, the rider is in a stable condition having been airlifted to hospital in Denver. The fact that some riders had to tackle the most physically-challenging stage of the race twice may have affected the overall result, but we’ll never know. Stage 7 was back to the bike park bombing of the first day, with everyone able to get back on the gas again. When the results came in it showed a mixed weekend for the team. Joe kept up his good run of form to finish 7th and Ines had a solid race coming in 10th, while Ludo never got in the right groove, dropping down to 52nd.

Joe was satisfied with how the weekend turned out and another top-10 result:

“This was actually quite a good race for me. Much better than last year and it went even better than I’d expected. It’s good to see that I can constantly cope with all the big boys out there and I came dead close to winning a stage again this weekend. I felt really good the whole weekend, therefore I´m really disappointed with the last stage on Sunday. My run was okay but then I saw my time and couldn´t believe it at first that I was so slow. I thought there must be a mistake, but the timing back-up was okay. I could have easily gained two places if I’d pushed it harder. But anyway it’s another solid top-ten. Let’s go to Whistler – Yeah Baeys!” 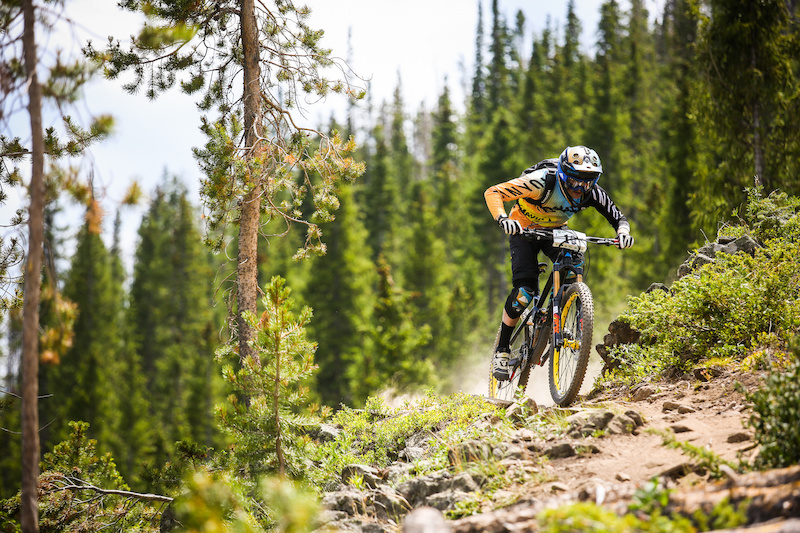 We’ve got one day to give bikes and bodies a rest before catching the flight to Vancouver and then next stop Whistler, where the riding Mecca awaits us. Catch the next entry of the Strive Diaries then in two weeks! 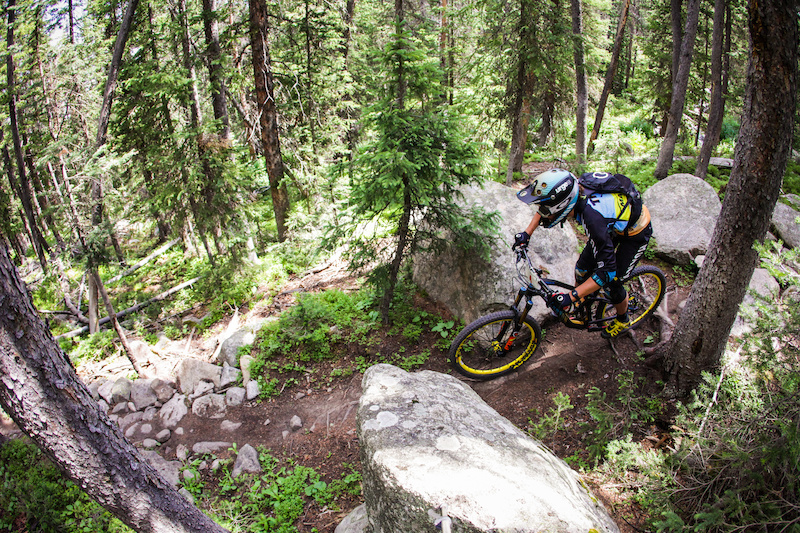 shutter2ride (Jul 30, 2014 at 12:02)
they just sound a bit frustrated. Yeti is local and their riders are more than a bit familiar with Winter Park... anyway, good to see Joe Barnes adjusting to these type of courses, way different than his local trails.

EnduroManiac (Jul 31, 2014 at 3:30)
As far as I understood the Yeti guys have been in Colorado since last EWS, nicely getting used to the altitude and building up red blood cells.
Sure those 2 guys are power machines and very good riders but you can't help thinking it's been an advantage, especially as it's the most physically demanding (eg flat) race.

"“Stages 4 and 5 were really short, like even less than two minutes so that’s also what we’re not really used to racing. Those hiking trails are dusty and really tight at the top - not really made for riding. Through the trees it was really difficult not to catch your bars. It’s really flat, not what I prefer and it´s definitely not sexy, but I guess that’s just the American interpretation of Enduro.”"

Technical trail riding instead of bike park racing is no good, then?

"Typically in the EWS, the riders aren’t so used to constantly hitting groomed doubles, berms and wallrides, and that was reflected in the results."

So bike park racing is no good either? What would the team prefer?

bkm303 (Jul 30, 2014 at 10:48)
Yeah, someone call the wambulance. Sounds like they had a really diverse set of trails....almost as if they set it up so a great all-around rider would be the winner. I guess that's the "American interpretation of enduro".

michibretz (Jul 30, 2014 at 11:19)
Yeah diverse for sure, including everything but the kind of riding the European events in the Alps feature where this form of racing originates hence American interpretation. No offense meant and am not saying one is better than the other but Euro-Alpine-Riding is just very very different to US riding and unless you experienced both you probably will not understand.

mtbbodhi (Jul 30, 2014 at 15:01)
Joe Barnes excelled at Tweedlove Enduro, by far the toughest riding conditions, and most demanding course in terms of bike handling these guys will see all year. It doesn't surprise me that they weren't digging the bike park. I was up there, and would see dad and his kid on rented bikes going to ride the same trails after the pros went thru. Bike parks don't necessarily show off these riders' abilities.

If the trails were easy shouldn't they slay them?

I've raced a variety of places this year and am always towards the back of the pack, therefore I'm equally bad everywhere. I've ridden Winter Park a gazillion times and STILL couldn't compete with the top guys.

This is the Enduro WORLD Series, so it should be expected that venues and formats are gonna vary from country to country. If all these guys wanna do is ride euro tracks then they should ride the European Enduro Series.

EnduroManiac (Jul 31, 2014 at 3:38)
@tempest3070: could be one rider complaining of berms and another complaining of the tight turns.... Or is it the Brendan Fairclough Syndroma (BFS)? Just not the right course, ever?

@NoahColorado: oh fine, if we can change whatever because it's a different place.... Then i'd suggest 110m hurdles to be run without hurdles in Europe. What do you think?
Seriously Enduro is meant to go mainly down on single trails. People coming up with "it's meant to test the most alround mtbikers" are usually in the sport for 2 years. So why would it change for new comers seriously? We're not gonna make a triathlon out of it are we? Xc-dh-4x? NO WAY!!

wannabeeracer (Jul 30, 2014 at 23:44)
We understand the trails are different. Maybe easier or maybe just different. Isn't different what Enduro is all about? It's easy to respect that different skill sets work better on different terrain; but do you have to sound so whiny? Isn't it better to just say, "I'm not as good as some people at these type of trails?"

camthecanasian (Jul 30, 2014 at 11:26)
Having raced this as a local the Europeans definitely had a difficult time with the altitude and were not used to the manicured jump trails at trestle. I did not like 4 or 5 either. I think that they used to be good trails but lack of use and that it is clear cut from beetle kill meant that the dirt was sandy, loose and not the most fun to ride. Having ridden behind Ines on raimaker it was obvious that she wasn't the most comfortable on all the jumps and neither were a lot of the veteran ews field that we would normally see in Europe

TheMastodon (Jul 30, 2014 at 17:09)
Really, rainmaker? Most intermediate riders could easily handle those jumps. A pro level racer should have the skills to ride on a variety of terrain even the tame terrain at tresle.

camthecanasian (Jul 30, 2014 at 20:47)
Just saying not all jumps were entirely cleared and she would certainty blow me away on mountain goat or trails like that.

danarchy420 (Jul 30, 2014 at 10:46)
The hiking trail are not hiking trails I don't know of anybody walking those trAils there are a lot of narrow gorilla trails I the winter park area dating back to the narrow bar days

tobitobi (Jul 30, 2014 at 13:33)
There's too much complaining about the trails. Either you can ride them all, or you're not a champion. Ask Minaar or Gwin if you need help.