What is the Greatest Danny MacAskill Edit Ever? 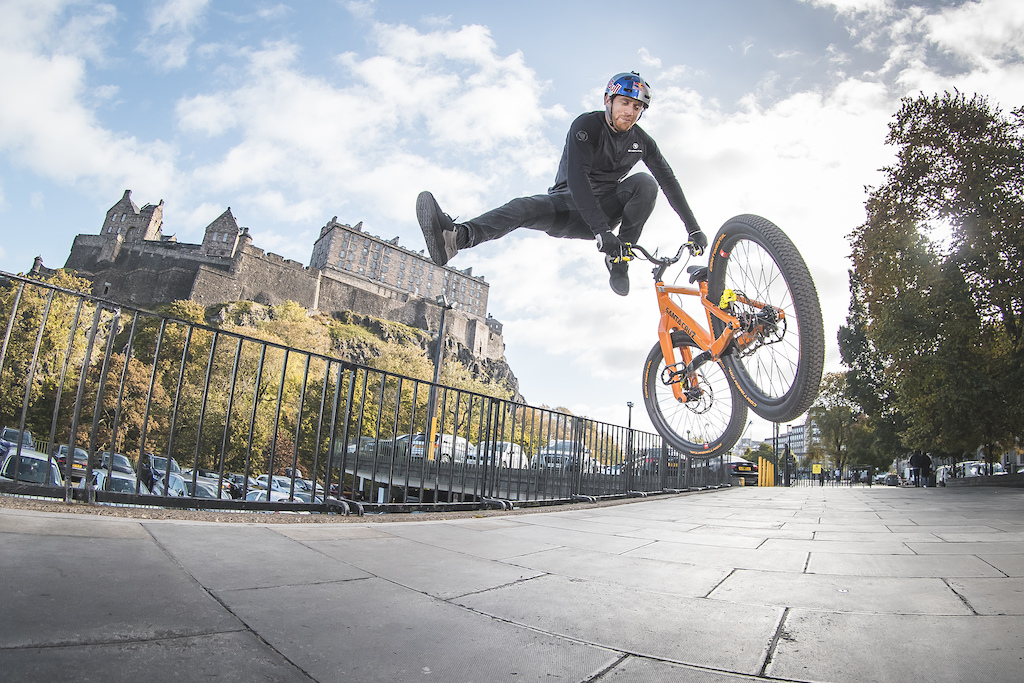 10 years on from bursting on to the scene with his fluid, technical and progressive Inspired Cycles edit, Danny MacAskill is still pumping out incredibly creative and entertaining videos.

To celebrate the anniversary of his arrival, we've ranked his best edits from the past ten years of riding. The edits that made this list are the ones that feature MacAskill alone and aren't explicitly advertising a product. Do you disagree with our rankings? There's a poll at the bottom to vote for your favourite.

10. At the Playboy Mansion
5.7 million views


A visit to the Playboy Mansion may sound like an odd edit for the clean-cut MacAskill and it plays out like one too. It's an edit that Danny says he regrets and describes as an "honest mistake" in his autobiography and with good reason. He apparently popped in after filming Epecuen but the riding isn't really on a par with that edit. A few hops and drops then a nose manual down the Weezer lawn is about all that's on offer here. It was heavily criticized on release and hasn't aged well since then.


Shot in an Argentinian town that was submerged for 30 years, Epecuen had the greatest scope and most impressive concept of any of Danny's edits. The riding and location take an equal share of the limelight in this edit and as such it doesn't quite have the excitement of some of Danny's other videos. There's no such thing as a bad Danny MacAskill edit but this one can feel a bit slow at points.


Shot for the UK's Channel 4 as part of a documentary looking at extreme sports in the UK, Industrial Revolutions sees Danny exploring an abandoned factory. It feels like a snappier version of Epecuen and the cable ride and rooftop drop remain some of the most impressive MacAskill stunts to date.


Danny's most recent edit was one of the most fun mountain bike videos ever. It was only intended to be a side project between other commitments for Stu Thompson and Danny but it turned into one of his best-ever edits. The flip with the trailer in tow is something to behold.


Taking to the colourful rooftops of Gran Canaria, there's no Danny MacAskill edit that gives you a sense of danger quite like Cascadia. Precariously balanced way above the streets, Danny rattles off a series of death-defying tricks and ends it off with a huge front flip into the Atlantic.


The much anticipated follow up to Danny's breakthrough Inspired edit, Way Back Home saw Danny take a trip across Scotland to return to his home on the Isle of Skye. Along the way, he visited a number of spots from seafront promenades to abandoned bunkers. Danny proved he could expand his scope beyond a single location and produce something more expansive than any trials edit before, setting himself on a path to even more amazing edits.


The Ridge was the first time many people saw Danny MacAskill on a 'proper' mountain bike and he proved that the trials skills he had perfected transferred over perfectly. Danny set his sights on summiting Cuillin Ridge and then riding back down again afterward. This is an edit that combines Skye's stunning scenery with MacAskill's incredible skills in a breathtaking 7 minutes.


Danny took almost twp years to make this edit but the results are definitely worth it. He was no longer constricted by architecture or geography and could create a playground of his childhood dreams to perform some tricks he had never been able to do before. It all paid off and Imaginate became the second most-watched mountain bike video ever behind Kelly McGarry's Rampage backflip. It even features a cameo from Danny's mum.


Getting our on our bikes and exploring is something we all do but nobody does it quite like Danny MacAskill. This is the most inventive of Danny's edits with hay bale rides, underwater double track and log slides stuck in between some incredibly tech trials riding. Wee Day Out is an edit that will bring a smile to your face every time you watch it.


The original and, for our money, still the best. Danny's Inspired edit doesn't have the polished veneer of his later edits and without the pressure of big sponsors or narratives, he was able to do what he does best. This is simply one of the best ever bike handlers shredding in the city he called home. With raw abandon, Danny MacAskill produced one of the greatest ever mountain bike edits and rose to stardom overnight. Even 10 years on, this is still an unbeatable display of riding.

What is your favourite Danny MacAskill edit?

Preachey (Oct 8, 2019 at 3:46)
I came here to fight anyone who said Wee Day Out wasn't the best, but I guess i can excuse the original in the top slot

SnowshoeRider4Life (Oct 8, 2019 at 9:02)
I wanted to say this too but i think the original does take the top slot looking back on it. No name rider, taking insane risks (imagine falling on the spiked fence). Just doing it cause he wants too.

powturn (Oct 8, 2019 at 10:02)
@Preachey @jamessmurthwaite @danny-macaskill: ranking aside, can we band together to fight for Danny & Inspired to re-release that legendary first edit in the higher resolution it deserves?

mark3 (Oct 8, 2019 at 11:00)
@SnowshoeRider4Life: I agree, I just watched inspired again and changed my vote from wee day out, its a tough poll though

lancifer (Oct 8, 2019 at 12:32)
@mark3: Tough poll for sure!!! I chose Inspired because more people e-mailed , talked about, or showed me("you gotta see this guy ride") this edit more than any other since! I am still amazed at the skill in those vids! No Doubt Danny raised(es) the bar! Plus it took me, my trials heroes, and my trials riding, from Hans Rey to Libor Karas to Ot Pi to Jeff Lenosky to Ryan Leech to Chris Akrigg to Danny! Thanks to you all!! Of course there are others: Fabio, Smage, Ali, Duncan...

Chilliwacker (Oct 8, 2019 at 0:34)
Haha yeah think it maybe that other slighter larger pond. You know Pinkbike the big blue bit between the Americas and Europe/Africa.

miguelcurto (Oct 8, 2019 at 2:39)
That take where he jumps the stairs at an underpassage tunnel and bypassers go check afterwards is fabulous. Inspired had a bit of dark humor that still makes it standout. Altought Daycare comes close

swansong (Oct 8, 2019 at 7:09)
Cascadia was the first thing I ever saw from Danny, and it remains my favorite. The colors and vibrancy of the city pop, the wide angle GoPro seems to emphasize the danger level, and the music is just killer. The whole Visiter album from The Dodos is worth a listen.

davidrobinsonphoto (Oct 8, 2019 at 5:29)
Everything since Inspired is amazing and all, and even though an effort has been made to make them feel natural, they all feel a bit too calculated and in some places, forced.

Inspired is just a dude riding street. Makes it more relatable (as much as it's possible to relate to DM)

bdoobz (Oct 8, 2019 at 5:48)
Inspired is the first biking edit that got me stoked to get out and ride. To this day 'The Funeral' is still one of those songs that reminds of when I fell in love with bikes.

My favourite is wee day out, but my 3 year old son’s is Imaginate.

rossi45 (Oct 8, 2019 at 11:28)
My money is on The Ridge. I love the scenery, the music and just the feel of watching someone ride the Isle of Skye. I'm also convinced that this is the most consequential edit he did. That POV along the ridge gives me goosebumps every time I watch it. The bike colors against the backdrop is so dope too!

therevfryslim (Oct 9, 2019 at 7:38)
inspired for the nostalgia. downloaded it using the fast(ish) university halls internet in c.2006 using a dodgy youtube for mozilla plugin that left a crappy watermark in the corner. I remember showing my old man the video and he couldn't get his head round it. 'he must have wires on him or something'

zulki-fly (Oct 8, 2019 at 5:58)
My kiddos love A Wee Day Out. After see that clip over and over again they think their father can do all the trick because mountainbiking too. He's a highlander kid, he's immortal.

Hogfly (Oct 8, 2019 at 9:03)
Inspired came out, for me, about the time I was returning, as an adult, to bikes. It coincided with my peak Band of Horses love, so it was a pretty magical thing.

I had all my friends sharing it and talking about it, and I was like, "Yeah... favorite current band... and bikes."

Garethccc (Oct 9, 2019 at 7:20)
I continue to like Inspired the most out of all Danny's clips. First I have to say that I love the soundtrack. But more than that, Inspired begins with Danny stuffing up repeatedly on that fence stunt. I think it's a fantastic beginning because it establishes a narrative... We see that he's not perfect, he must have messed up so many times to get all of those amazing shots, but he's talented and persistent and look at all the amazing moves he throws down because he refuses to be beaten by any particular feature he seems hell bent on mastering. It's a great lesson for us all, I think. All in a a really fun watch.

first time I saw him front manual backwards (better name?) I just thought it was magical

Niseach1 (Oct 8, 2019 at 8:16)
Loved his video with Claudio Caluori - Home of Trails. Some crazy stuff in addition to the really technical. An absolute genius!

matt-15 (Oct 8, 2019 at 11:25)
Toss-up for me between Imaginate and Danny Day Care, but I'll give my vote to Imaginate because I remember watching it when it first came out, and that loop-the-loop was awesome

wereonamissionfromgod (Oct 9, 2019 at 12:51)
I voted for playboy mansion.... shame. Fuck it. Im a dude Really though... Imaginate is the best one for me! IMO the most creative one and really expands what biking really is.

IntoTheEverflow (Oct 8, 2019 at 5:33)
Imaginate is the one I have seen the most, because my nephew was a bit obsessed with that one. My own favourite has to be Inspired, with The Ridge as a close second.

notphaedrus (Oct 8, 2019 at 10:24)
That's ridiculous... doing a corkscrew backflip with a wee bairn on board! You should be ashamed promoting such foolhardyness!

But Wee Day Out wins it for me. I like the mood.

stefanfresh (Oct 8, 2019 at 5:24)
I dont really get why anyone would critise the playboy mansion video that much, I mean sure its nothing compared to the rest, but its an interesting mix haha

lorrainetruong (Oct 8, 2019 at 6:50)
Watching Inspired (for the billions time), I was wondering how Dany would do at a BMX freestyle comp!

loganflores (Oct 8, 2019 at 11:02)
Am I wrong wasn’t his first edit even older music was cakes the distance or was that someone else?

nsmithbmx (Oct 9, 2019 at 11:12)
Had a hard time choosing between Inspired and Cascadia. Inspired has such a great feel to it.

nozes (Oct 8, 2019 at 7:00)
If they continue to produce content with this quality for free, they can try to sell me anything,I couldn't care less.

rojo-1 (Oct 8, 2019 at 9:07)
@el-nombre: True, and they're all still epic videos, which I appreciate watching (for free!). There is just a sense of simplicity in the first video before the corporate machines have latched on.

yeti-monster (Oct 11, 2019 at 2:27)
@pk71: pinkbike getting too politically correct to take a joke. Any comment about T&A gets neg props. Personally I say bring back the Marzocchi calendar, but I'm a red blooded dinosaur
Below threshold threads are hidden

EnduroManiac (Oct 8, 2019 at 0:25)
Who is this wannabe Fabio Wibmer? Same bike colors, clothes colors and helmet painting. Come on Danny, be yourself!
(just kidding a bit)