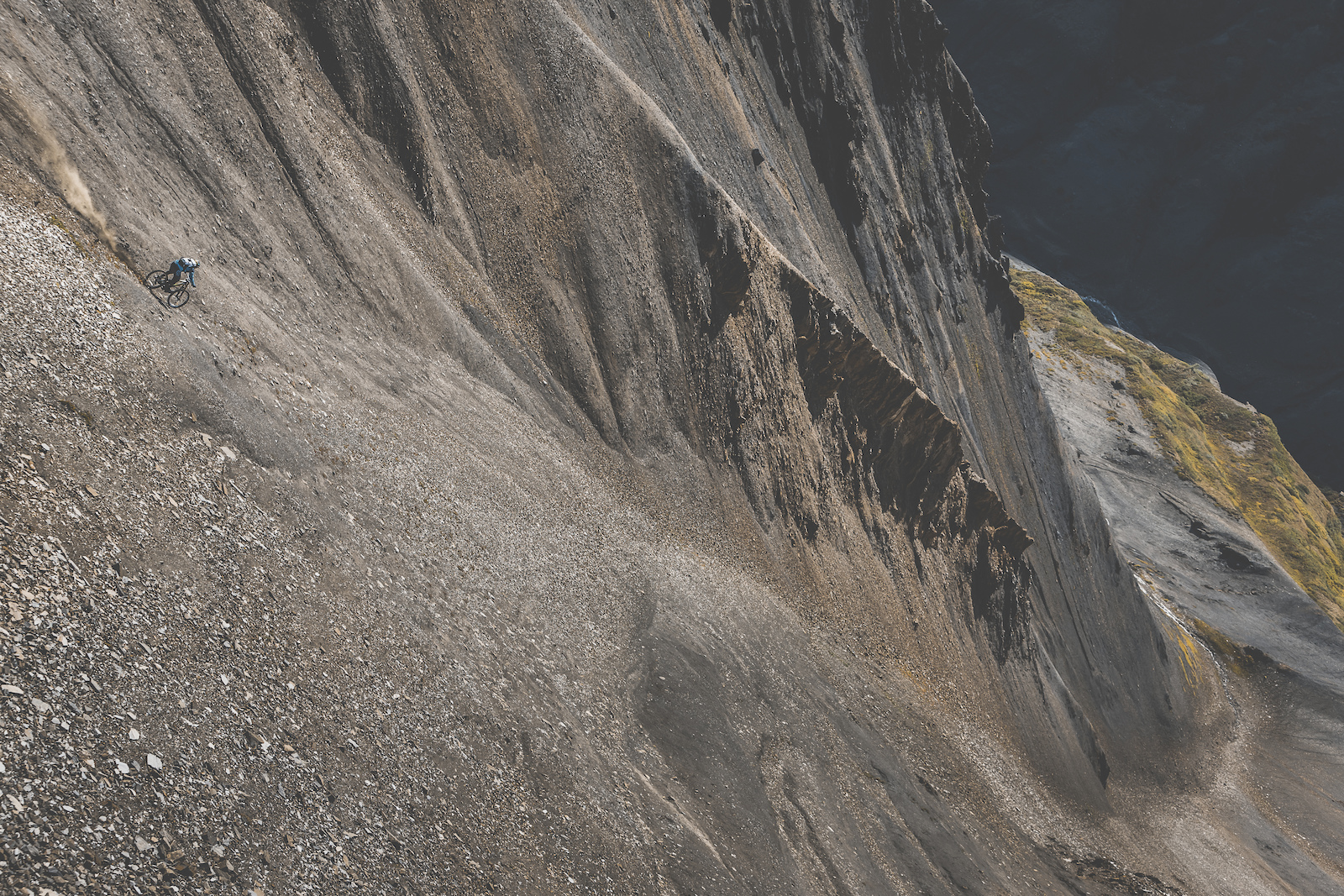 The Wade Simmons Interview
RIDING THE TATSHENSHINI
Last year Wade Simmons, Darren Berrecloth, Tyler McCaul, and Carson Storch explored some of the incredible, untapped terrain around the Yukon's Tatshenshini River. Last Thursday night, during an informal premiere of Riding the Tatshenshini at Red Bull's Vancouver headquarters, we caught up with the Godfather of Freeride himself to talk about the trip of a lifetime.

Hey, Wade, how are things these days? Besides showing the kids the ropes of freeride on trips like this, what have you been up to?

Wade - Oh man, things are good! Now that the fall has arrived, I've been able to ride bikes more with the kids being in school, and the family is doing great. I've also been very busy with the "booking season.'' As you're aware, I've taken on another role as a sales guy for Rocky Mountain, Race Face, etc. and I'm quite enjoying it! But I am pumped to be here tonight and see this project for the first time.

The film is definitely more documentary than a pure action shreddit, but the scale of the terrain out there is hard to wrap your head around. Were there any heavy lines that stick out for you beyond what we see in the film?

Wade - Haha, yes, you nailed it saying, ''hard to wrap your head around.'' Not only was the terrain huge and steep, but you quickly realize that this is no controlled bike park or local riding area; you f*ck up and it could be game over. We pretty much filmed everything we rode to make the most of it. Unfortunately, like we all know, film does not do it justice; the terrain was mind-boggling and all the guys rode superb... But Claw was in his element! 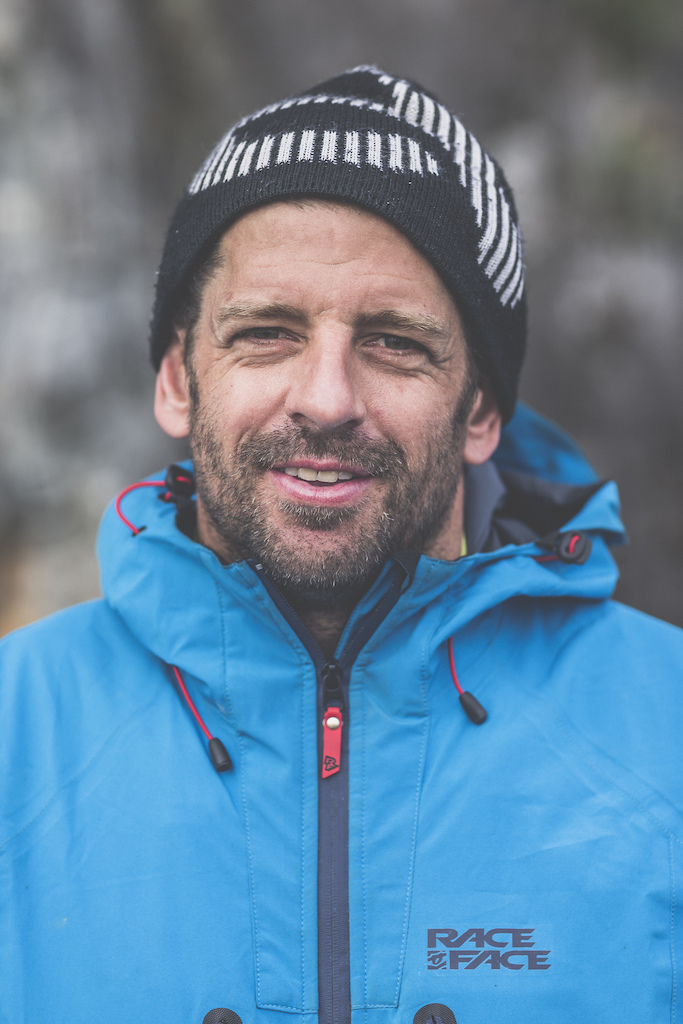 It sounded like you guys were legitimately in the middle of nowhere. What happens when someone goes down? Does that factor into how you approach things?


Wade - Typically, on shoots of this caliber, there are always a couple certified medical first responders on hand, and having a helicopter on-site did boost our confidence if things were to go really sideways. But, for sure the remoteness does become a factor when the big lines and jumps start getting hit, and I'd be lying if I said it doesn't affect how we approach things.

How many bikes did you bring up there?


Wade - All of the riders brought two bikes; an all-mountain rig and a DH bike. But in the end, we spent most of the time on the DH bikes; big terrain demands big bikes.

The visuals from the Tatshenshini are absolutely insane — everything looks pristine and wild and mindblowing. In contrast, who smelled the worst up there?


Wade - Good question. I really didn't go around and test the stink factor, but you can imagine that riding every day, combined with camping and freezing cold river washes, means that things could get ripe! To be honest, though, the guide outfitters had a warm shower setup so one could clean up if necessary. 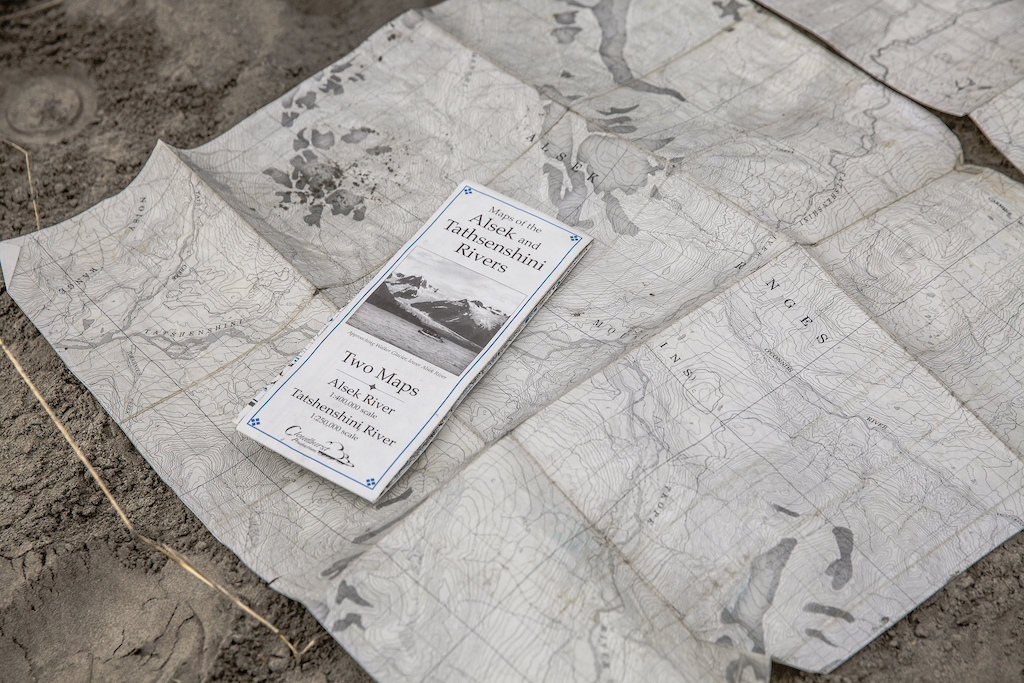 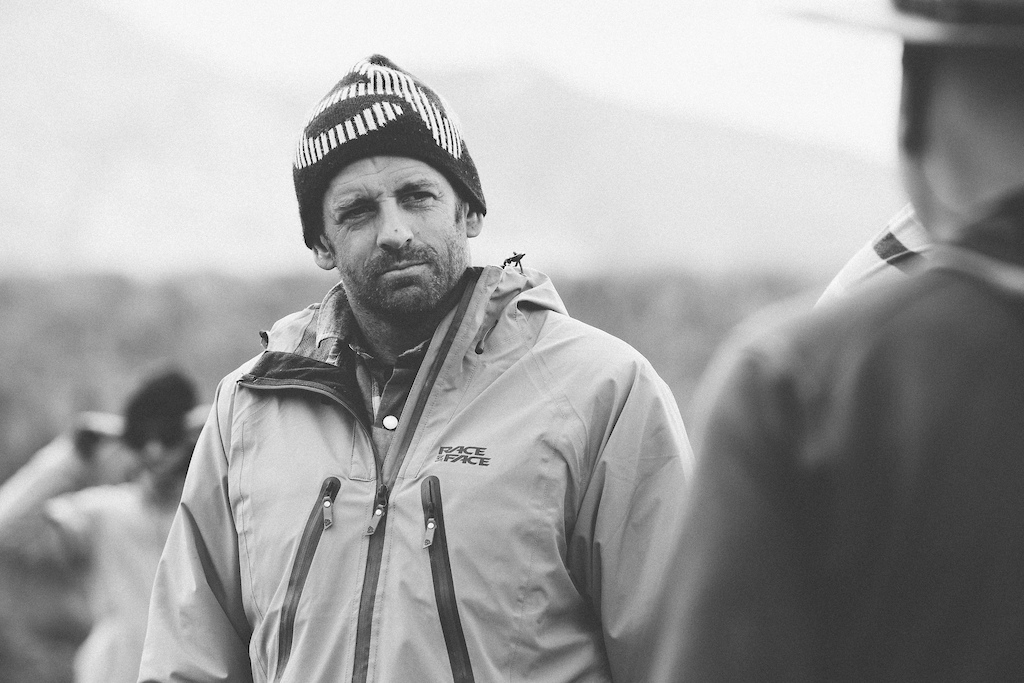 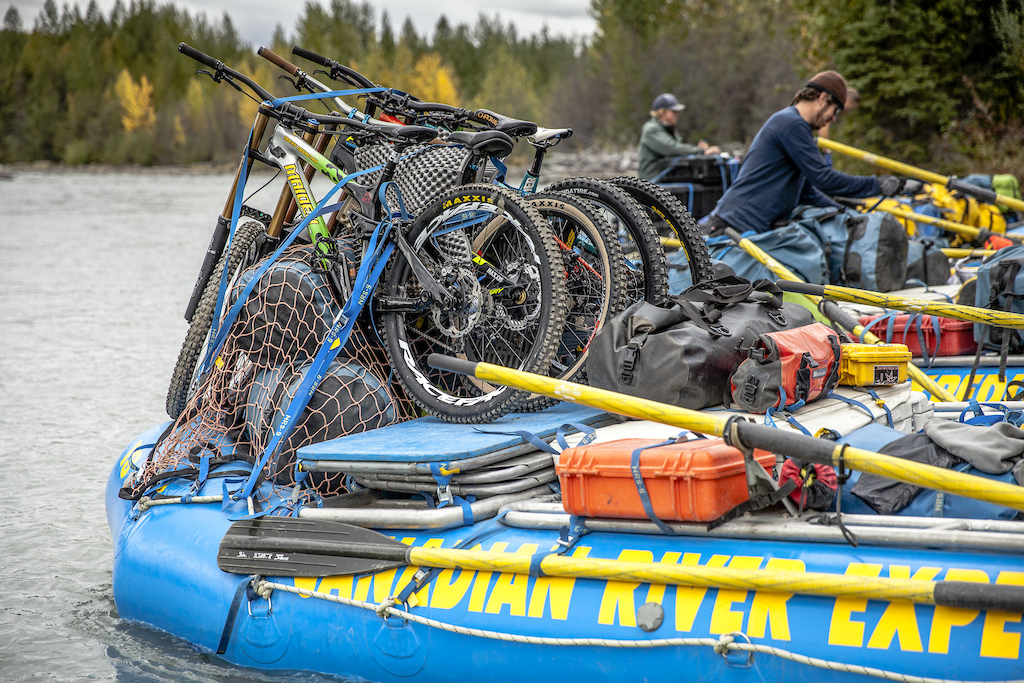 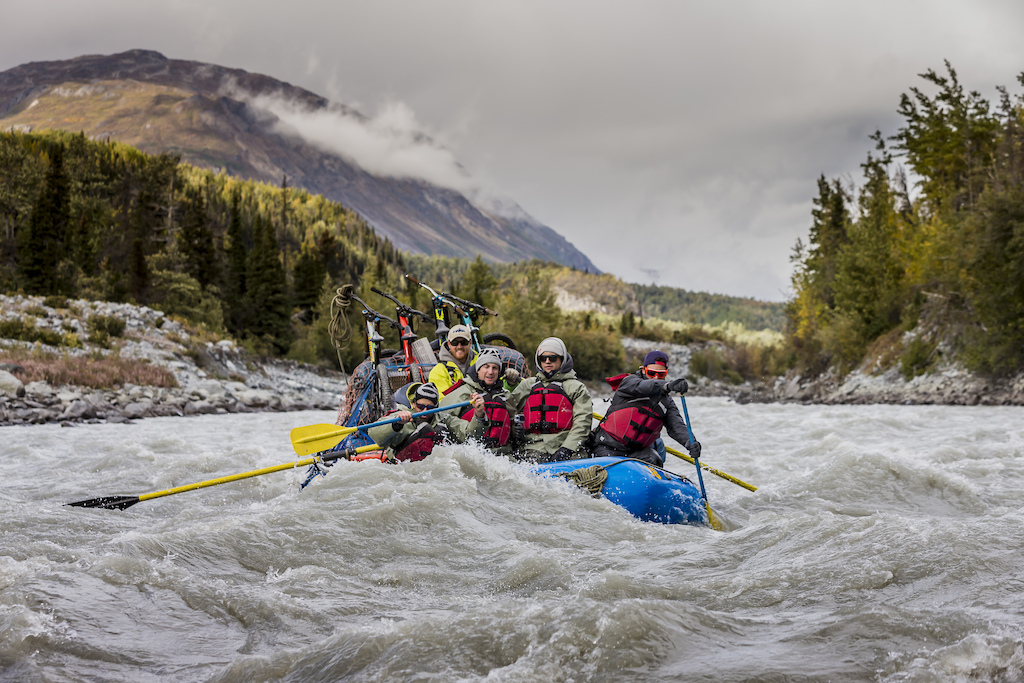 You had to make an early exit from the film to take care of some things at home. What's it like balancing work, life, and being a dad?


Wade - Yeah, 2016/17 proved to be a challenging time for Lisa, the kids, and I due to Lisa finishing up an intense one-year ER residency. For me to get away on an extended trip like this was very lucky, and I'm thankful to her to understand my wanting to do this "trip of a lifetime", which it no doubt was. I enjoy the work/life challenge and, in essence, it's pretty simple: go hard when working and be 100% involved when with family.

All four "generations" of freeride are featured in the film. Is it a different feeling watching the young guns push themselves and the sport? Proud godfather, or secretly still competitive?


Wade - I am proud as hell to watch the younger generations evolve the sport! To hang with these three shredders and get a chance to rip lines and witness some of the radness that went down was amazing. I've always had no problem sitting back and watching riders shred if I'm out of my element, especially now that I'm getting older. I enjoy what they must be feeling, being masters of what they do. I fondly remember when I was on top of my game; it was like I had superpowers. I'm sure that's how they feel.

Thanks for chatting, anything else you'd like to add?


Wade - I'd like to thank Redbull and Freeride Entertainment for this opportunity; it's getting harder to produce original ideas and these guys are the rulers!

Produced by Freeride Entertainment, Riding the Tatshenshini will premiere live on October 18th on Red Bull TV and Telus Optik. Pinkbike will have an exclusive 24-hour FREE viewing of the film on October 18th.

NOTE: With guidance and permissions from Yukon Tourism, Champagne First Nations, as well as Canadian and American National and Provincial Park officials, all details were considered in order to ensure the preservation of the land and environment. Shelters were built on elevated structures, flame retardant blankets were used to eliminate scarring on the ground from campfires and all waste (including human) was carried out of the camp where it could be disposed of in the proper fashion. The unique shale and rock sediment of these northern trails left no traces behind, leaving the mountains as pristine as when they were discovered.

wallheater (Oct 15, 2017 at 9:07)
I was glad to read the 'note' at the end. Too often experiences like this come across as entitled white doods ripping up other people's land in the name of entertainment. So it was good to see that all permission were sought including from local First Nations, and that the environment was respected

dualsuspensiondave (Oct 16, 2017 at 9:54)
@wallheater: I work as an environmental engineer, and really there's not much damage they could have done long as they clean up after themselves. They aren't pouring wet concrete into streams or clearing a bunch of forest. And the white man... to blame for everything bad in this world apparently.

TerrapinBen (Oct 16, 2017 at 10:09)
@dualsuspensiondave: Some would argue that riding off trail is an impact that cannot be mitigated - especially in this wilderness environment... Great to read that they did due diligence and were able to abide in a manner that left the environment with the least amount of impact.

dualsuspensiondave (Oct 16, 2017 at 10:49)
@TerrapinBen: I understand that completely. In fact, that's even the field I work in. I love the environment, and that's why I work to keep it clean everyday. I'm just saying that a few people riding and camping in this situation won't make any major impact at all long as they clean up after themselves. I always chuckle at the arrogant folks who think that individuals on a small scale will harm a Wilderness environment by camping and riding when they clean up after themselves.

BryceBorlick (Oct 24, 2017 at 8:03)
@dualsuspensiondave: ya carrying your poop out rather than burying it seems a bit unnecesary but maybe it was more a show of respect to first nations

privateer-wheels (Oct 15, 2017 at 10:36)
There was an article on this bike, PB put it up a good while back. Special anniversary present for Wade from rocky I think. Raceface even did some diablous decal jod on some parts.

si-paton (Oct 15, 2017 at 13:54)
Respect, huge amounts of respect for Wade, carving the way for us kids and holding down a proper job now, a family and still being RAD.

deiru (Oct 15, 2017 at 12:56)
I feel a bikepacking/hike-a-bike/packrafting trip coming on next summer. This looks rad and is pretty much in my backyard (well 2-3 hour drive away and then god knows how long to hike/paddle). There is so much terrain up here it's hard to comprehend sometimes... but will definitely have to wait till next year as there is already 4" of snow here...

Sshredder (Oct 15, 2017 at 11:13)
Remote wilderness big mountain lines. Brought to you by the God Father of Free Ride! No competion just the Freedom of Riding.

DONKEY-FELTCHER (Oct 15, 2017 at 13:11)
Poop tubes are the best thing about alpine mountaineering

mtbandskiforlife (Oct 15, 2017 at 9:31)
Sounds like his wife is a doctor. Once you complete medical school you have a 3-7 year residency, which is essentially an internship.

daveykishnina (Oct 15, 2017 at 23:19)
This is just ridiculous. If there is such a thing as spirit of adventure this doesn't fit. It is a protected area becuase it is sensitive. There are so few wild remnents left in this world they don't need to be free ridden.