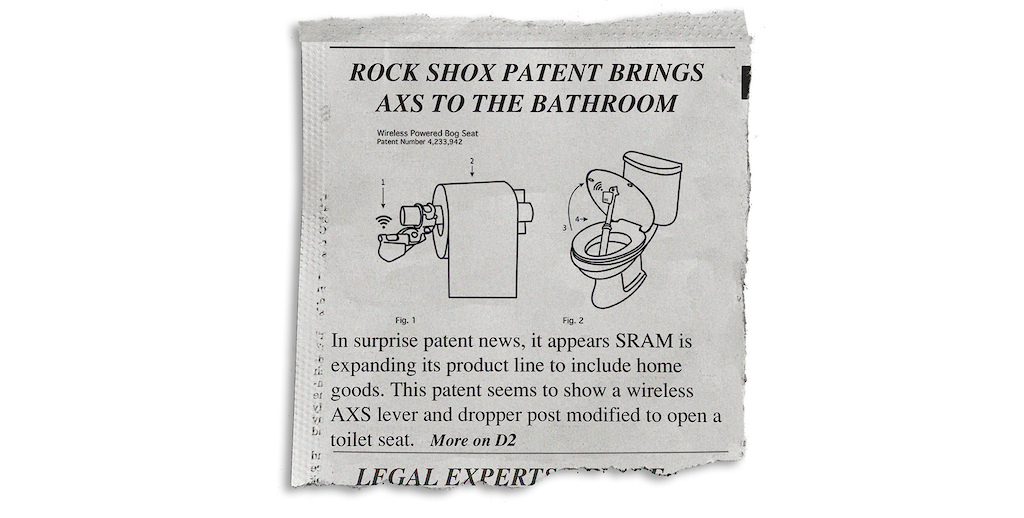 Art by Taj Mihelich
Join us as we take a look at things that definitely didn't happen in the bicycle industry this month. 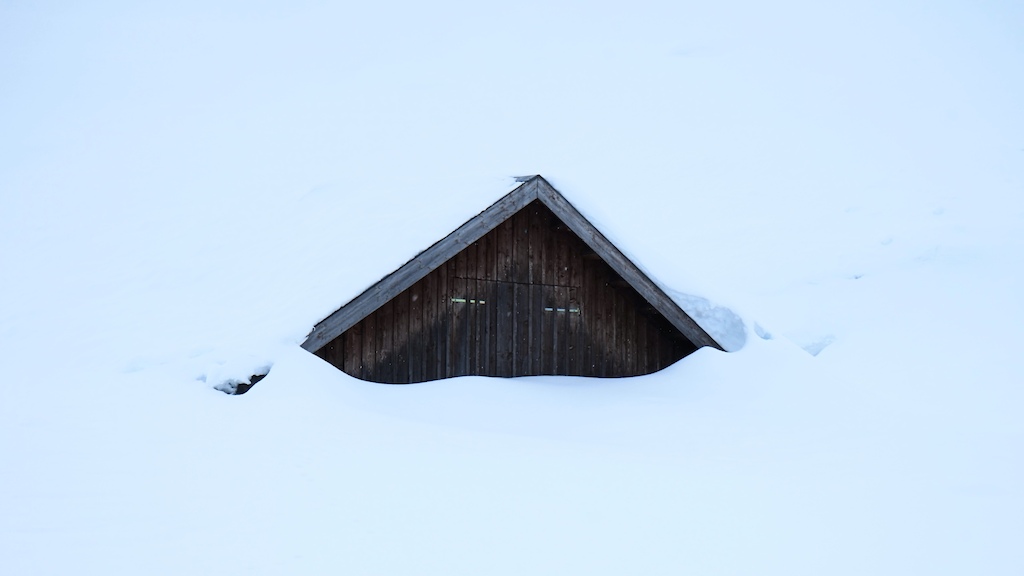 A 42 person brawl erupted in early January at a local cafe after mountain biker Freedom McClure took a local skier saying “I can’t believe it’s still only early season” as the insult it was intended to be.

McClure, who had just fallen over three times thanks to the 6 inches of solid ice covering the car park and has not ridden his bike in six weeks, reportedly yelled “Chest deep this you yuppy shitbag” as he swung chairs, kicked a child in an Arcteryx jacket in the face and pushed over an elderly man who just happened to be wearing a buff.

It took thirteen skiers, who thanks to their weak and puny bodies from merely doing a hobby and not a real sport were no match for an aggravated mountain bicyclist, to eventually restrain him fully.

"There's no issue here. The results speak for themselves".
A prominent lubrication manufacturer has taken their battle to the supreme court this month as they defend their right to not add any quantity, descriptions or values to their graphs other than “good” and “bad”.


MTB Journalist Pens Controversial, Brave Opinion Piece in Which He Claims Bikes Should be Cheaper, More Durable, Compatible, and Also Locally Made 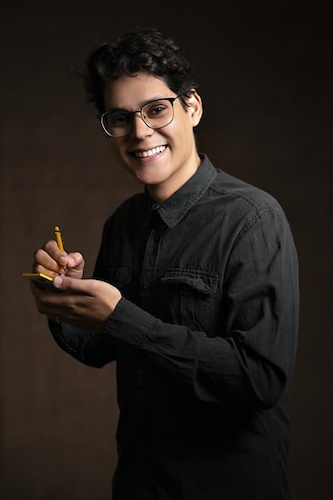 The man is an inspiration. Move over, John Simpson.
An intrepid blogger has stepped up to the plate this week to tell people what they want to hear.

Justin Timbersnake laid out the blueprints for his dream of mountain biking, as well as letting out some far-fetched opinions.

“Bikes should be cheaper… and better… and locally sourced with infinite cross compatibility while also always being incrementally improved… but also should see wholesale changes like the implementation of gearboxes. Oh, and they need to be lighter, too.”

The courageous piece titled “Sometimes the lowest hanging fruit is also the tastiest” has been greeted with widespread approval and even those in hardened literary circles have praised Timbersnake for his hard-hitting journalism. Nutella Johnson, reporting from a basement in North Korea, called Timbersnake a “true hero”.

Man Is Still Talking About the One Time He Took Mushrooms, 3 Months On

Lenny Quimby is still telling anyone that will listen about the one time he got lost in a woods in the autumn. Quimby, who’s well out of his depth in both drug culture, as well as culture in general, seems to have accidentally started using surfing terms to describe his experience.

“I was just in the pocket man, riding the barrel. I was so pitted!" Quimby was overheard telling a cashier at a gas station when he actually should have been pumping out articles for Mike Bike. The lack of new and original content on the mountain biking website is not down to the harsh winter weather, the global pandemic, the holiday season, or a lull in new product releases, instead it is in fact solely down to Quimby's desire to speak about nothing other than his botched trip and refusal to write anything about bikes for the last three months.

Quimby who, before his foray into surf-slang, went under evaluation from a board of local experts, has spent every day since the events googling “Have I lost my mind?” whilst eating cold baked beans out of the can and listening to Pat Benetar. 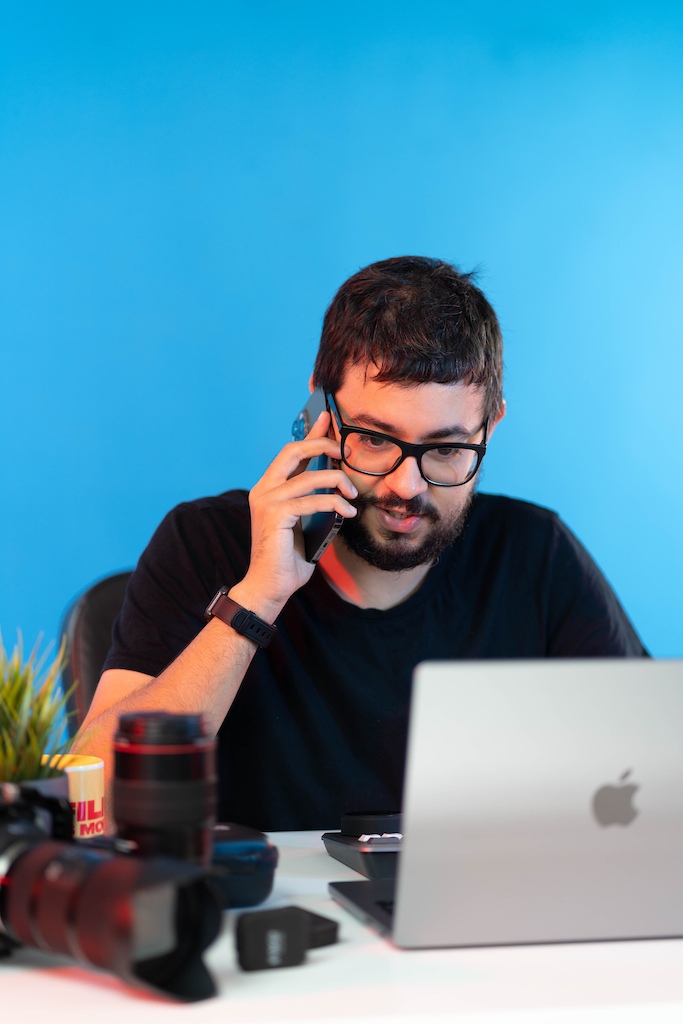 ”Wait... hello? It's cut out again. Weird."
Professor Mogfoganall, a neurobiology expert concluded, “he’s not suffering from the effects of drugs, I kind of wish he was. Nope, sadly for him he’s just an absolute wierdo - a real piece of work. Yes, you can quote me on that. It's a technical term”. 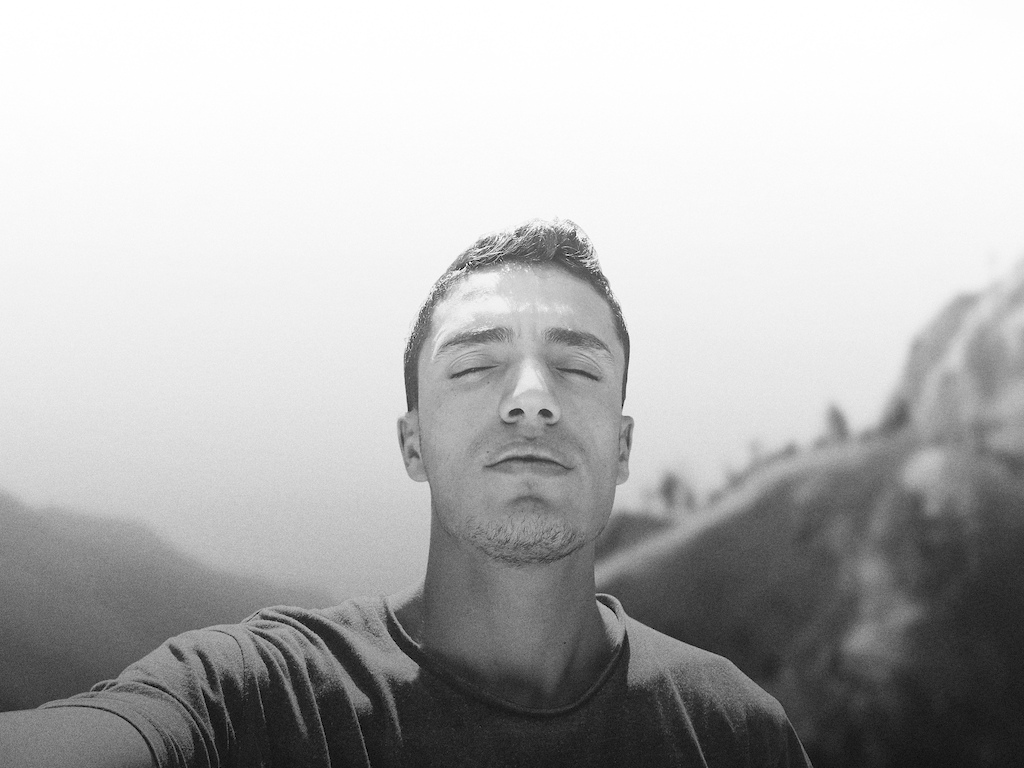 A recent photo by Beckingham captioned "When I'm alone in nature in a beautiful place I get this existential dread and I worry that people aren't thinking about me enough. People are probably wanting to know what I think about nature. I should definitely tell them it's beautiful and also try and show that expression in my face."
Ken Oath has sworn an oath of fealty to do the exact opposite of local Strava pro Todd “The Bod” Beckingham. “I just can’t take it anymore,” Oath informed us, “It’s the weird selfies, the rubber-faced pained expressions on the turbo trainer… the awful edits or the TikTok dances. It’s too much. I know for a fact that guy is buying his bikes for near full retail and just hashtagging for no apparent reason. He must have spent thousands to keep up this charade. I don’t know if it’s brand loyalty to the extreme or a severe bout of delusion but it’s just too much”.

Ken Oath is so unimpressed with Beckingham’s actions that he has sworn to never buy anything from any brand that supports him, purely due to the cringe factor alone.

In other news, local police hostage negotiator Hannah Anna Pethrington has today told of her success in a new approach to dealing with local influencers. Pethrington coaxed Tony Seagull down from three posts a week about strapping your iPhone to your mountain bike handlebars by agreeing to buy just one, on the condition they never bring it up again. 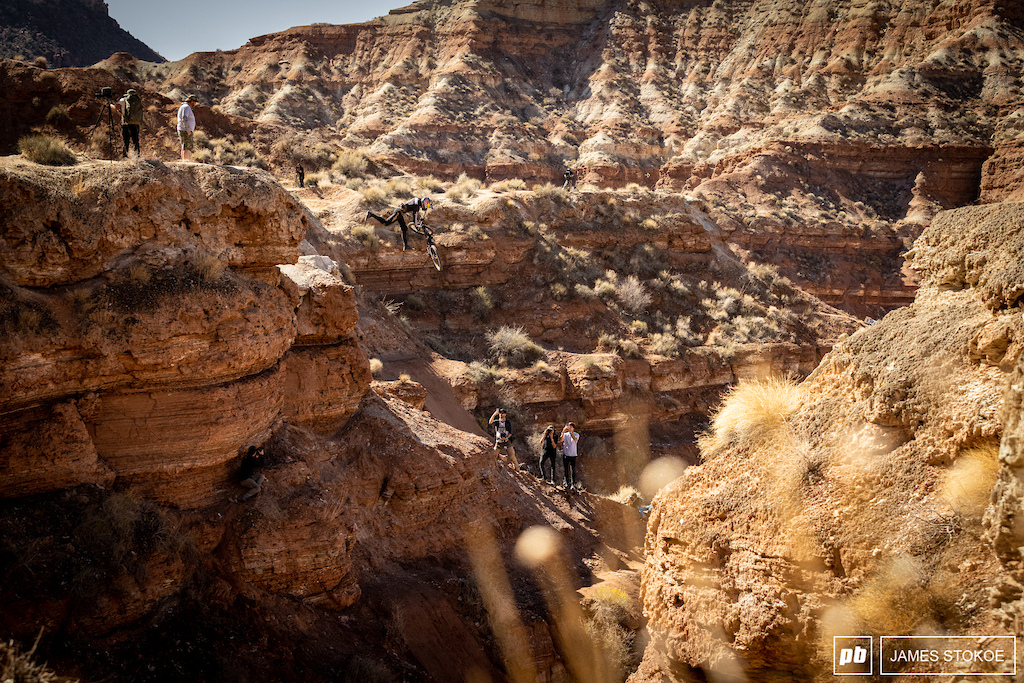 The whirly-durly in action.
Shockwaves are still being felt through the mountain biking scene this winter as Brandon Semenuk showed what a Trek with uninhibited bar rotation could accomplish.

The bike, a non-KnockBlock equipped something-or-other-they-all-look-the-same-to-me-I’m-gonna-guess-slash, was spun round in a move Semunuk says he learnt in his Tuesday night ballroom dancing class.

“Doing the spinny trick thing on a bike actually came to me that very morning as I ate my Frosties. I looked at that picture of Tony the Tiger and felt a wave of inspiration washing over me. I took that KnockBlock out and knew I was good to go”. 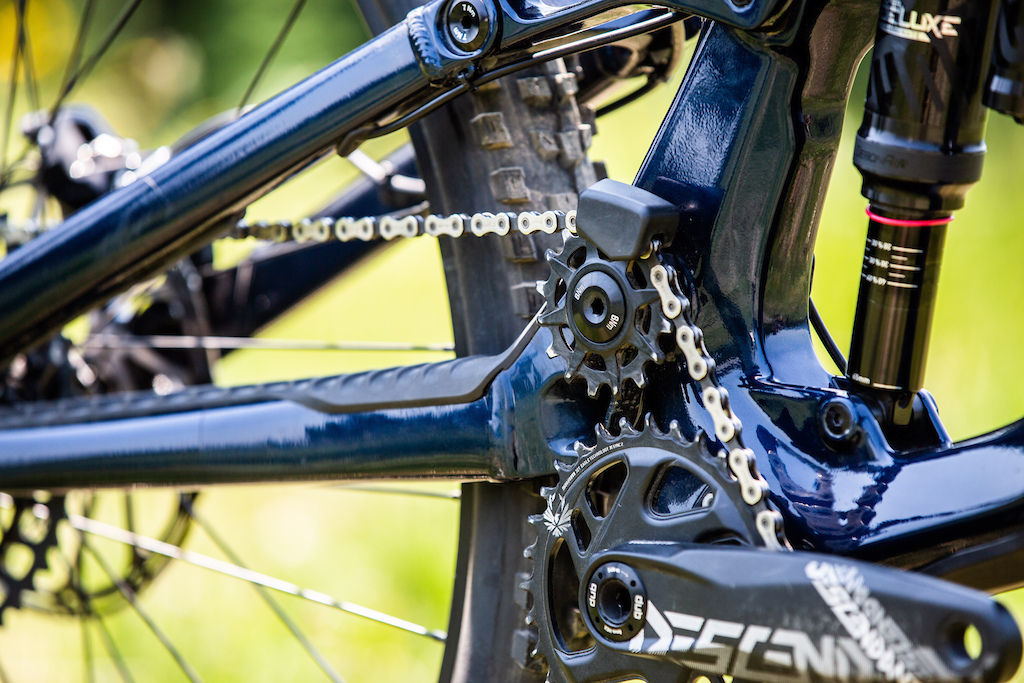 Idlers are there with the sole intention of ruining climbing performance, according to one prominent BC journalist.
“You’re bloody joking? How much?” These were the haunting words of anti-idler enthusiast Tabatha Toblerone upon her discovery that the half a watt lost to the idler pales in comparison to heavier, grippier tyres.

“Next you’ll be telling me that my 190mm Zebs are heavier than some StepCast 32s… they are!?”

“It’s almost as if there are lots of things that decrease a bike’s efficiency that have very tangible performance gain when descending the bike… but that just can’t be true. It’s the idler that is the sole reason why a 40lb coil-sprung 180mm bike doesn’t pedal well, and I won’t hear otherwise.” 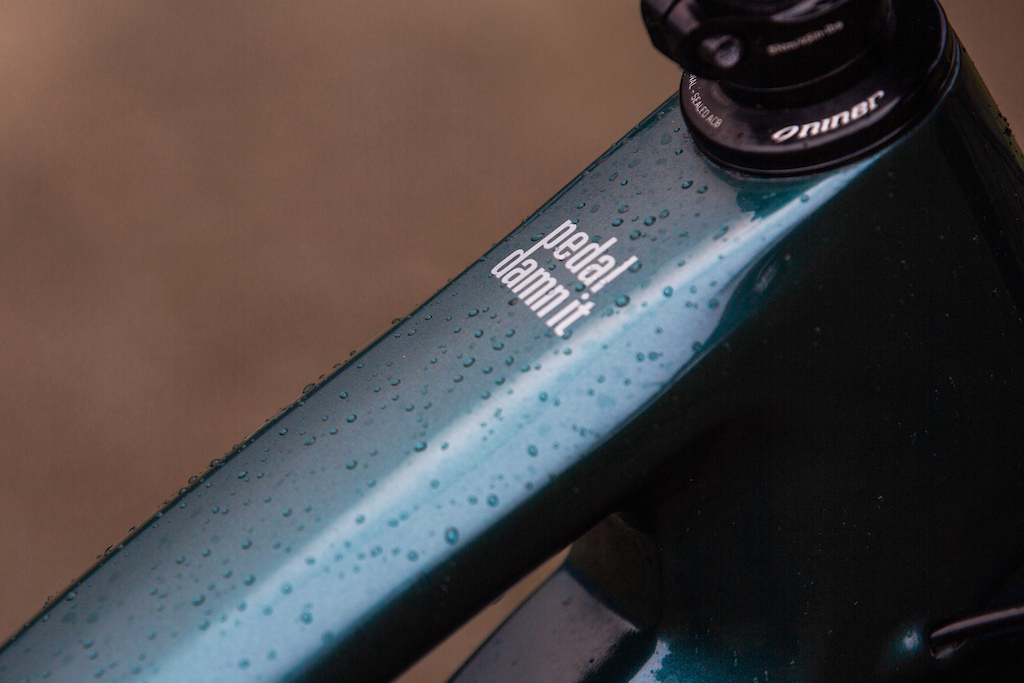 You can do it.
Mountain bike chief designer Leanne Der Fall not only is responsible for handy sayings such as “pedal, damn it” on the top tube of all the bikes she designs, but also sells motivational stickers for any number of household items.

Her new season’s collection involves a “eat, damn it” slogan on a plate as well as a “shit, damn it” motif on a toilet seat.

"It can really give you that edge when you're pushing hard" she explained.

In other reports, one man is furious at the misspelling of "Accept no imitations" on his counterfeit DMR Death Grips. He also admits he's been pronouncing the name of his Cannondale F-Si HiMod as Fisheye Mod for months. And a woman in Ottery St Mary is bemused by the naming of her Polygon Square One which doesn't feature a single straight frame tube.

PAmtbiker (Jan 14, 2022 at 14:10)
That pic clearly shows the Reverb lifting the toilet lid (not the seat), so I'm wondering where the Reverb goes when you need to sit down on the toilet

@PAmtbiker: be safe; be well

BiNARYBiKE (Jan 14, 2022 at 13:23)
No these are things that actually didn’t happen. Are you even a real mountain biker if you don’t have a bmx background? Full confession: I’ve never raced bmx in my life. But I did watch Rad on repeat when I was a kid. I’m hoping that will help me squeak by the MTB gatekeepers?

gnarlysipes (Jan 14, 2022 at 13:57)
@BiNARYBiKE: Never touched a BMX bike… unless you count my 20” solid steel, rigid bike I learned on as a kid. It may have looked like a BMX but it didn’t have pegs or a 25 year old man pedaling around on it like it was normal.

rrolly (Jan 15, 2022 at 7:19)
Having not been able to ride the past six weeks because of the weather made me relate way too much to that article!

NZRalphy (Jan 14, 2022 at 16:52)
Yeah. Im wondering if Henry is remotely verbalising his frustration at Canadian snow. It is sunny here in NZ Henry!

tommyrod74 (Jan 14, 2022 at 13:41)
I just assumed Taj wrote the article as, well, he's known to be funny. Kudos to Quinney, whom I mistakenly assumed to be incapable of writing anything other that a review of an XC bike whilst complaining that it isn't more like an enduro rig.

MuddyBrit (Jan 14, 2022 at 14:23)
On the subject of inspirational stickers/decals, I did enjoy the self-made sticker from the man in the Daily Drivers article this week: "This Bike F*cks"

singletrackslayer (Jan 14, 2022 at 13:20)
It's not clichéd bike industry satire until there's a Specialized lawsuit joke.

rrolly (Jan 15, 2022 at 7:35)
Henry has the best assignment at PB. He gets to scan the comments and turn our stupid gripes into fake articles (farticles?). Then he sits back while we pump his tires/tyres. Genius.

Thirty3 (Jan 14, 2022 at 13:09)
Cheaper, better, more compatible AND locally made. HAHAHA. Unlike that neurobiologist drugs really got to this guy

Darwin66 (Jan 14, 2022 at 17:05)
more of this! more of this! I would be happy if pinkbike became a mountain bike comedy site with the occasional review or bit of industry info. Anything better than the recent bottom of the barrel shite we've been getting.

powderhoundbrr (Jan 14, 2022 at 13:32)
The GoPro footage one is gold!! I to have some poorly edited chest mounted shaky video of A Line that I subject my friends to having to watch.

derekbnorakim (Jan 14, 2022 at 14:28)
Sure would have been better if this article was written on mushrooms.

pockets-the-coyote (Jan 14, 2022 at 15:29)
"and there’s scores" Henry reminding us of the real challenges of using them/theirs. Always excited to see your industry editorials sir, keep up the great work!

Thoromian (Jan 15, 2022 at 10:09)
Anybody else think that Henry had a drinking contest with the team to get this approved, and upload ASAP when they drunkenly said ?yes?

gomeeker (Jan 15, 2022 at 10:29)
Thank you Henry for responding to all of the complainers about lack of content. Quality piece!!

TimnberG (Jan 14, 2022 at 13:06)
Brake pad demand still outweighs supply by a large margin. Other parts are very difficult to find too.

grumbly (Jan 14, 2022 at 18:08)
Between the biblical rain and the snow in the NW, summer sport people are having a hard time. Bad year to not like winter sports.

Seriously though, did this article feel a little self-serving-let's-not-mince-words-circle-jerky, noo definetly not.


*Better let the baguettes harden before you hit us with them after you hit the coffee shop.