Through the Lens - Baxter Redfern

Join Pinkbike  Login
Baxter Redfern is a Videographer/Photographer based out of Victoria, B.C. Working closely with big names such as Harookz, and Ian Hylands, as well as having some of the most talented riders as friends has played a role in helping him hone his skills. However, Baxter's work stands out on its own, thanks to his raw talent, charisma, and humor; something I had the privilege of witnessing first hand while attending photography school at the same time as Baxter.

Check inside for an interview with Baxter Redfern, First off, who are you and where are you from?
Baxter Redfern - current residence Victoria, BC

How did you get into mountain biking?
Darren Von Claw got me into it, we came up BMXing together and after I moved up north he said to me "Dude you gotta try big bikes" of course I was skeptical, but after I narrowly survived my first lap (Dirt Merchant @ Whistler, thanks to Darren and Ryan for that) I was completely hooked and haven't ridden a BMX since. It worked out well because I was growing tired of how cool you had to be to ride a BMX - and it's still a lot like that - but mountain bike culture is just way more of a bro-down. That's what's great about it.

What sports were you into before biking?
I was really into BMX for the most part, but I also played hockey, soccer, baseball, rugby, golf, bocce ball, frisbee golf, lawn darts, hot yoga, normal yoga and tai chi. 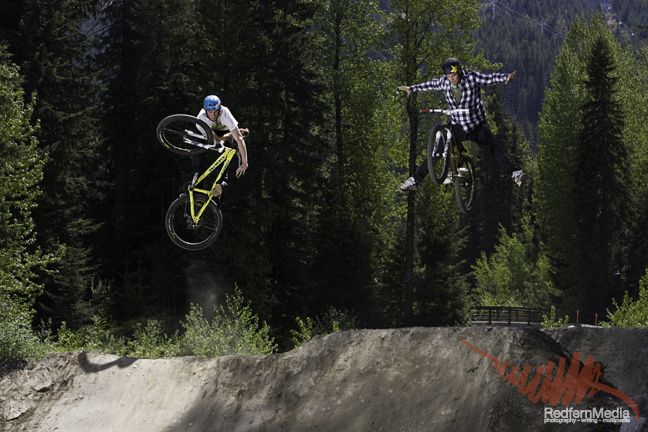 What got you into Photography/Cinematography?
I've always been really into the arts, since I was really young, after high school I lost track of that and went up north to work in the -30 degree cold. That seven years gave me a lot of time to think...one thing led to another and here I am.

Whose work are you super stoked on right now?
So many peoples' stuff, video wise some of the big budget crews are just making things look soooooo good. Leaves lots to strive for. Probably my favorite on the rise guy is Aaron LaRocque, I just like the way he puts his shots together. He's a majorly talented dude and in this industry I think he's super under rated and super under appreciated. That's this game though, it's tough because you can really pour yourself into something and at the end of the month sometimes you could have made more money working as a sandwich artist.

Who do you think inspires you the most?
Man, I think there are lots of things that inspire me. First of all I hate being shitty at things, so that keeps a fire lit under me. All of those people who extended themselves to help me up when I was down, they inspire me, I owe it to them to make the most of this opportunity and I take that really seriously. 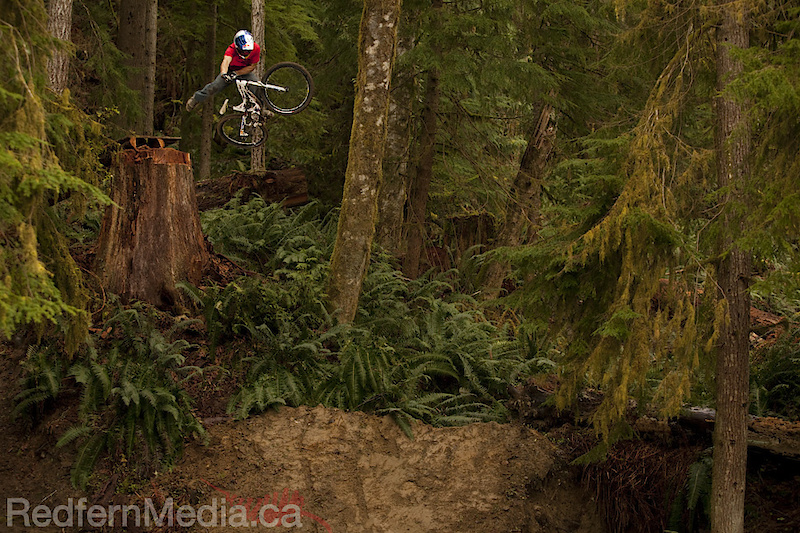 If you weren't shooting, what do you think you'd be doing?
Probably something messed up like getting boo'd off stage in a comedy club or fighting bears in a traveling circus, those are my only other talents: Jokes and bear fighting.

Are you working another job right now, or shooting full time?
No media is my full time gig right now, MTB stuff unfortunately isn't 100% of my business, but I'm still pretty stoked to do as much as I do.

Do you find yourself shooting more video or stills as of late?
Probably video. I am shooting stills, but for the last year or so I've been focusing on getting my video skills up to par. I want my business to be as versatile as possible and I want my clients to be able to count on me for whatever it is they need. Photographer, Cinematographer, Writer, anything they want I gots it. 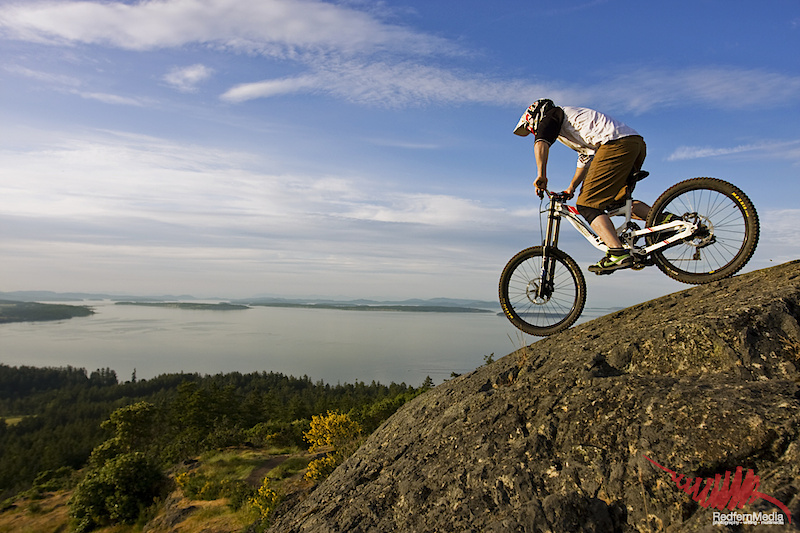 Do You currently have any big projects on the go or right around the corner that you can talk about?
Yeah I have tons on the go right now, nothing too secret, We just dropped this Eric Lawrenuk edit which is awesome! I'm working with Ryan Berrecloth on his new web series that's coming out, it's gonna smash the scene later this year, lots of funny stuff in that series, plus a ton of epic riding. I'm working on a web edit with Darren Von Claw, shooting lots of stills and trying to make it back out to Nelson to hang with the Freeride crew some more and sponge up some more skills... You can peep some of my vids here.

What's in your Camera bag?
Ha ha barely anything, most of it is sitting on the coffee table in a crack house somewhere, but I'm not bitter, I'm fine. I don't still weep at night or anything. My pillow isn't covered in tears if that's what your thinking... it's drool, I swear... I use a Canon DSLR system for all of my stuff (stills and video), I've found for the type of shooting I do, it can't be beat. Since the theft I really don't have much gear, but I beg, borrow and rent my way through shoots. My list looks like this: 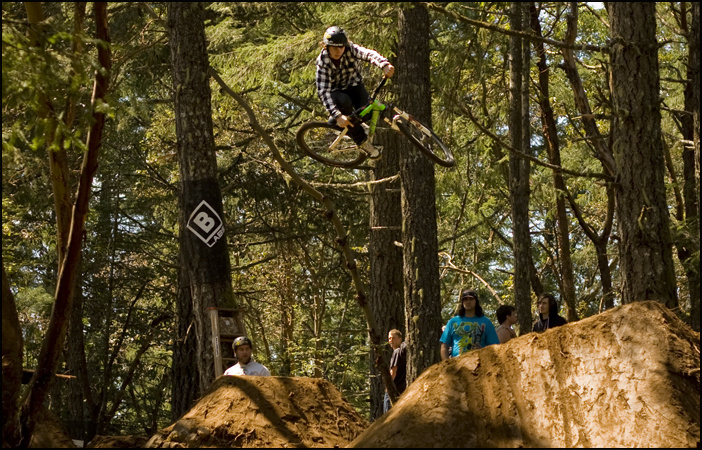 What's the weirdest thing that has happened to you?
The weirdest thing to happen to me? Well weird isn't really the best way to describe it, but in December all of my camera gear was stolen and a group of my good friends and family stepped up and raised a bunch of cash to get me back on my feet. Weird isn't the right word for it, but it was the last thing that really blew my mind. I was amazed and obviously super appreciative. The fact that those people had my back like that means the world to me.

You and some friends recently won a video contest for Big Rock Brewery, what was the deal with that?
Yeah me and my friend Matt Hamilton and his production company Rockey Shores co-produced a beer commercial for submission to this year's Big Rock Eddies contest and we won. It was a huge surprise because the competition was really tough, but when all was said and done we were left standing. We then rewarded Big Rock by giving absolutely horridly vulgar acceptance speeches at back to back events in Calgary and Vancouver. Apparently we could use some coaching. You can check the Vid under the winners gallery.


Favorite Musician?
Who can pick that? Who only likes one band anymore? Does anyone say "bands" anymore? That felt old to say that. Here's the next five songs to come up on my iTunes:

Would you rather shoot for a living, or ride your bike?
Shooting. I think sometimes that sounds crazy to people, but my first love is shooting/filming and bikes are a close second to that. People are probably cringing reading this, but that's the truth, I love days spent on my bike, but they're secondary to creating beautiful images. That's my first love. 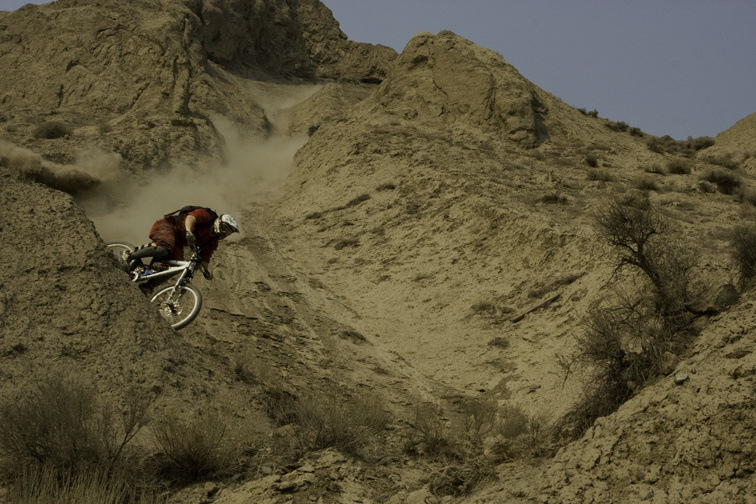 Any tips or bits of advice for kids just starting to get into sports photography/cinematography?
Don't do it expecting to be rich, don't do it for free and don't do it for any reason other than that you love it.

Beefs and bouquets?
Beefs? Haha, that ain't me. I'm not into beefin. If I have to beef with someone I'd rather just squash them and forget about them. Bouquets? That's more my style, I have a lot of people to thank. My girlfriend Shawna for taking care of our dachshund while I'm away chasing the light. Ian Hylands and Haruki Noguchi, I owe both of those guys more than a few pints. Darren Berrecloth for getting me into mountain bikes, and Ryan Berrecloth for helping my career. He has gone to bat for me more times than I can count. I'm very, very greatful for the hard work he has put in to getting me this far. Derek, Jeremy and Lunchbox at Freeride Entertainment. Pinkbike for hosting this thing. Everyone who has bought a photo or video from me, every rider who has ridden for/with me and most of all my family and friends for always having my back, no matter what: they are the thing I value most.

Where can people check out your work?
My website is www.redfernmedia.ca and it's all on there, bike work, personal work, all of it. 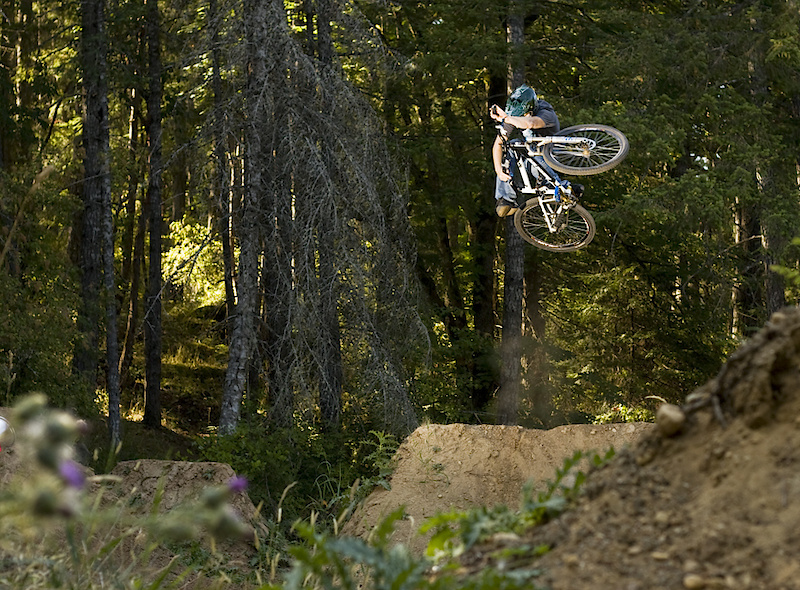 stinker (Jul 16, 2010 at 20:15)
that video was one of the funniest things i have ever seen lmfaosfhitio if you can figure out what that says then mad props to u and sick photos too

fraserbritton Plus (Jul 15, 2010 at 9:28)
There are some great shots in the there. The zig zag sandstone line is pretty epic. So much to draw the eye in. Love it. Keep up the great work.

bfdrider (Jul 17, 2010 at 23:43)
About time for some good recognition for an unbelievably chill guy. glad you found your truck dude!