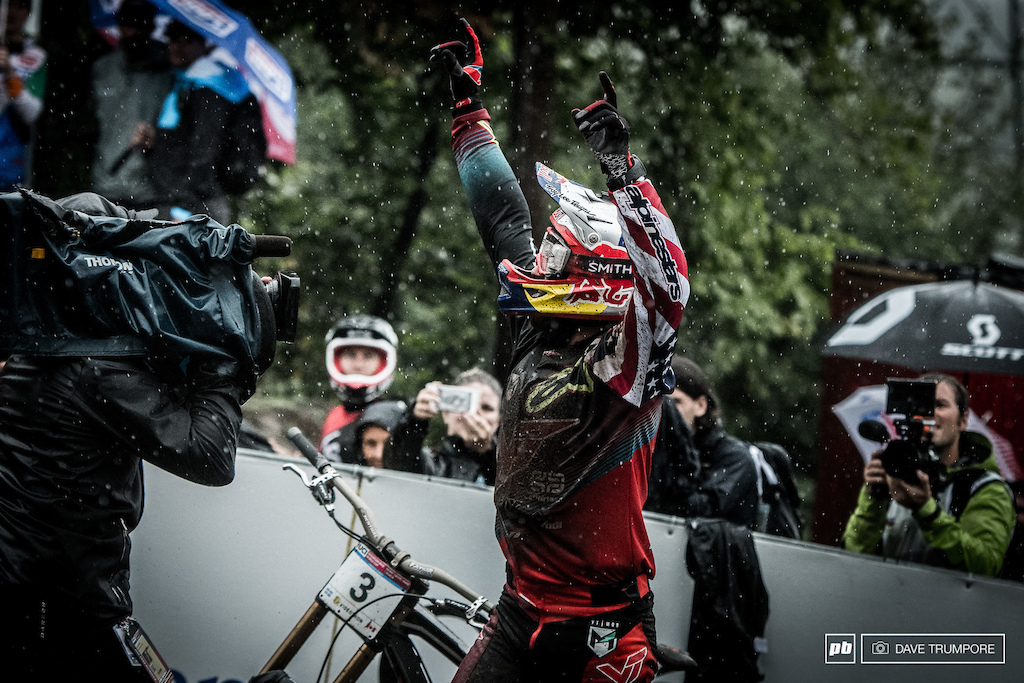 With the season finale this weekend in Snowshoe, we look back at the final race of the 2017 World Cup season. It concluded on a brutal track and was one of the most dramatic season finales ever, with crashes, punctures and broken frames.

This was the first year of 29ers in downhill and Greg Minnaar was showing that they were more than fast enough for the sport's highest competition as he headed into the penultimate race of 2017 with a 253 point lead on third-place rider Aaron Gwin.

In qualifying at Mont Sainte Anne, the two were closely matched again, with Gwin going fastest but Minnaar only 1.8 seconds back in third but, come race day, the heavens opened halfway through the Elite Men's racing. The track wet through and slick by the time Minnaar left the start gate and he crashed out on his race run finishing 79th.

For the rest of the top qualifiers, it looked to be a case of simply surviving and nursing out as many points as possible. Danny Hart showed his usual wet prowess to put down a run good enough for provisional second but it was Gwin that would turn the rulebook on its head. The Californian, who has spent most of his life riding dry, dusty trails put down a wet-weather masterclass and one of the most incredible runs in mtb history to take the top spot.


This totally changed the overall picture. Gwin was left just 33 points behind Minnaar and with one race to go either of them could take the title. Coming into Val di Sole it was effectively a head-to-head with the series set to be decided by whoever had the best race run.

Greg's luck started going from bad to worse as in the practice session before qualifying, his bike hit a course marking pole and snapped in two:

In an incredible display of mechanicing from Marshy and mental fortitude from Minnaar, he was able to have a completely new bike built for qualifying in just 45 minutes and managed to lay down a run that placed him 2nd going into finals. It wasn't quite good enough to beat Gwin though, who took the top spot and reduced Minnaar's lead to only 23 points. 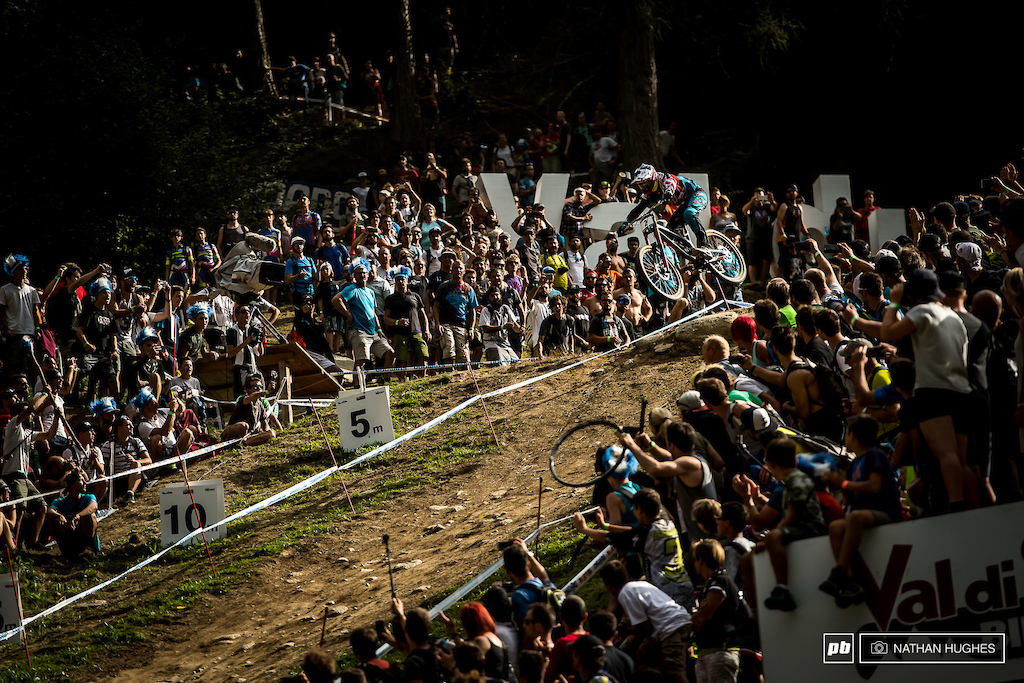 They say bad luck comes in threes and it did again for Minnaar as he punctured on his run. After all the build up and a seaon-long campaign, he had to run across the finish line and ended up in 79th, his title race effectively over. 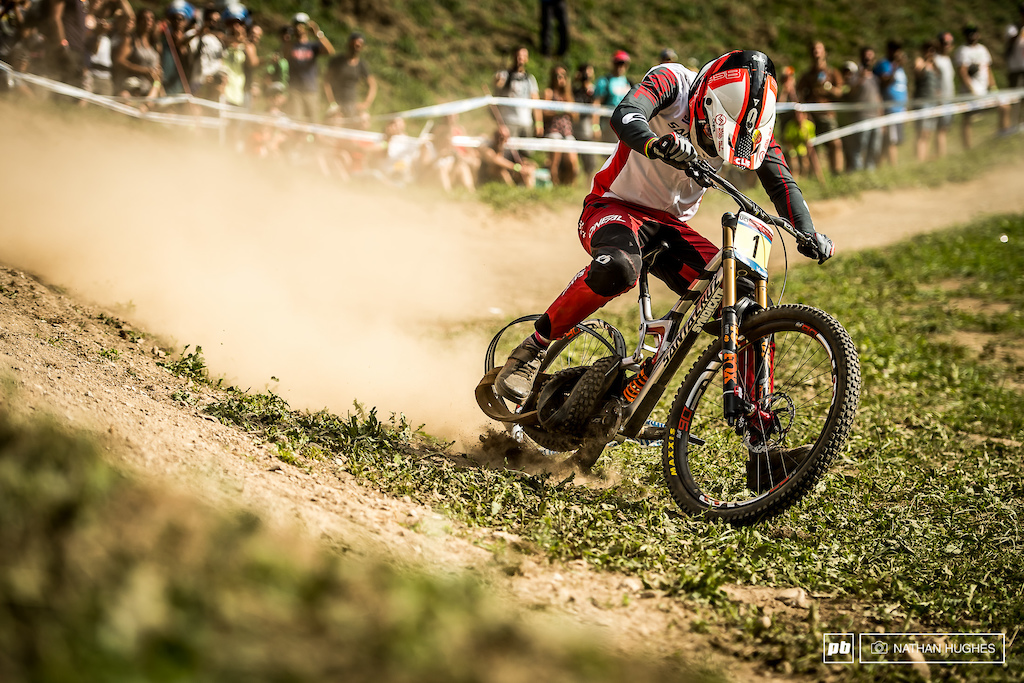 Gwin just had to roll down to ensure the title but he either didn't know or didn't care and instead went out all guns blazing. He took the win by 1.407 seconds over Amaury Pierron and with it the overall title. Minnaar actually dropped back to third and Troy Brosnan would move into second place. In just two races, Minnaar had lost 428 points to Gwin and lost any chance of taking the overall.

Preachey (Sep 5, 2019 at 0:39)
I'm surprised Minnaar didn't rage-retire from racing after that end to the season - followed up by breaking his arm after one race in 2018. It's incredible he's still managed to come back physically and mentally and get right back competing for the top spot

brodoyouevenbike (Sep 5, 2019 at 1:11)
That level of consistency for so long only comes from pure love of the sport. I have a feeling he doesn't care much about his position.

flymcg (Sep 5, 2019 at 1:19)
@brodoyouevenbike: i have a feeling he's still gunning for wins and very much cares about his position!

Of course I hate him because I'm the same age as him and he removes my excuse for being old and slow! ;-)

leboize (Sep 5, 2019 at 1:17)
Yeah, while riding the prototype "puncture proof" rims. Kinda ruined the credibility of the technology if you ask me.

zyoungson (Sep 5, 2019 at 3:52)
@IllestT: Never heard this, looks like he was running the prototype assegai tyre, surely they would have done it with a dh casing?

thesharkman (Sep 5, 2019 at 2:05)
The m29, now m275, has never been a champion level bike and kenda tires suck as well. Obviously Gwin's amazing skill is needed also but it's a whole different world on the Tues and Onza Aquila setup.