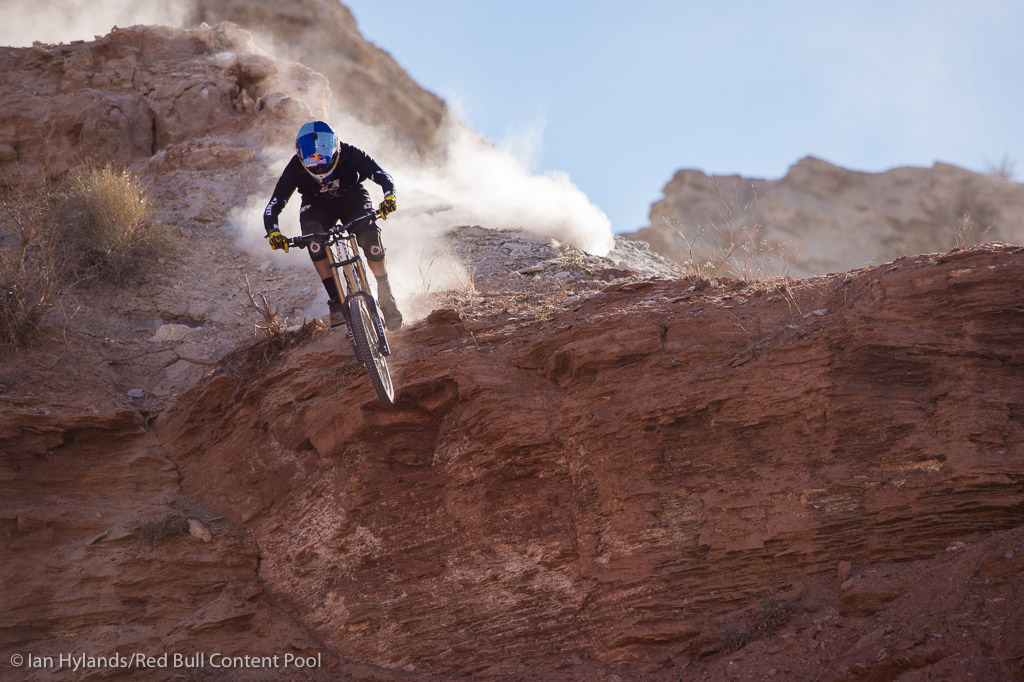 With the news that Gee Atherton will be sending it at Rampage this year, take a look back at Gee's previous attempts at conquering the infamous event.

2003
The first year that Gee Atherton headed out to the Utah desert was back in 2003 for the 3rd edition of Rampage. His first attempt did not go to plan with a spectacular crash in practice that saw him quickly heading off to the local hospital. He would be back for redemption soon. 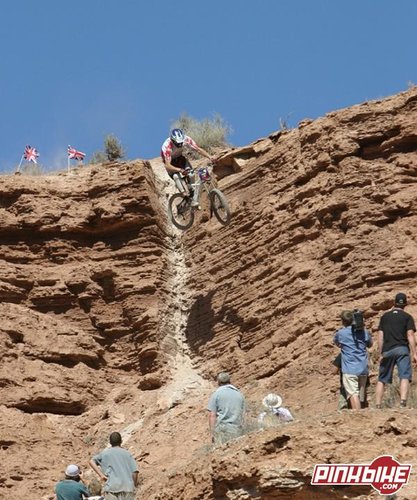 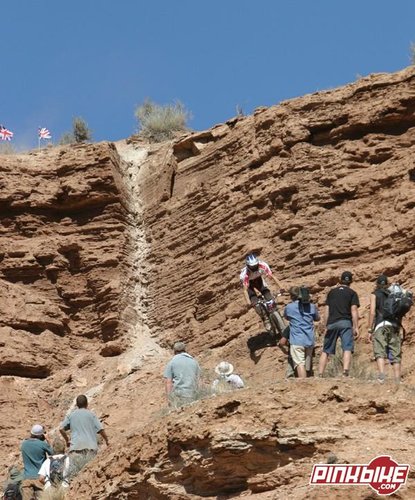 2004
The following year the young Atherton returned and pulled out another impressive run that placed him just two points behind Kyle Strait in second place. His crash the year before did nothing to slow him down and Gee proved he had the credentials to pull off a top spot against some of freeride's best competitors.


2008
After taking a four-year break, Rampage returned with a stacked field of riders and it would be Brandon Semenuk's first victory in the desert. But 2008 was another disastrous year for Gee as five minutes before the final runs began, the then DH World Champion went down on the slowest part of his run and separated his shoulder.


2010
In 2010, Rampage saw 21 riders surviving to finals and it was another great year for Gee as he took his second runner-up finish behind Cam Zink. Then 25, he also sent one of the legendary gaps when he landed his huge gap to wallride. 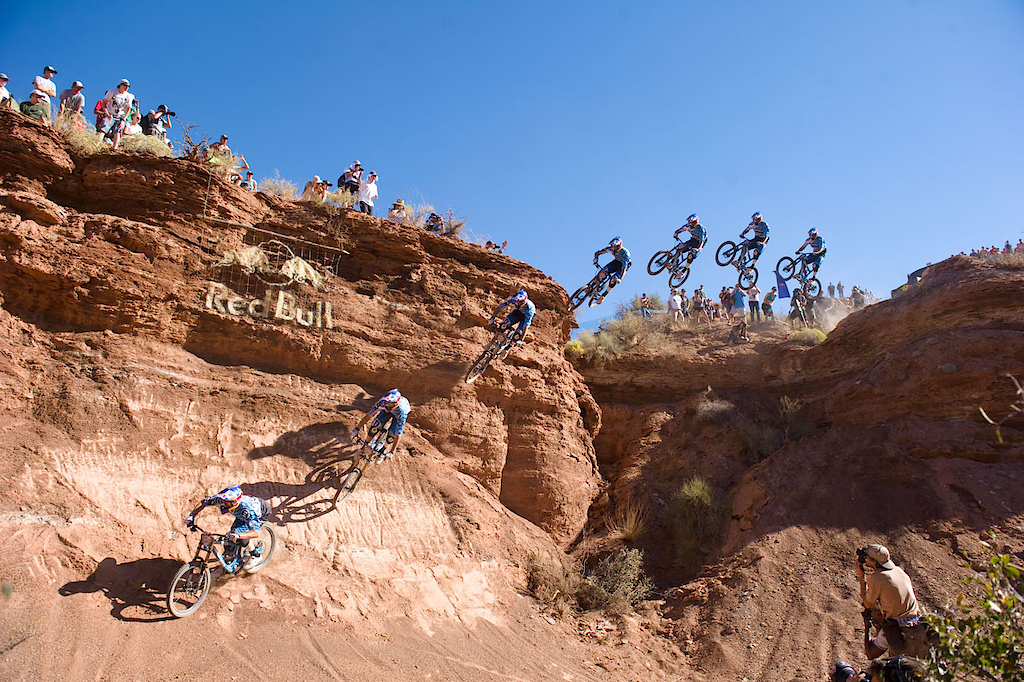 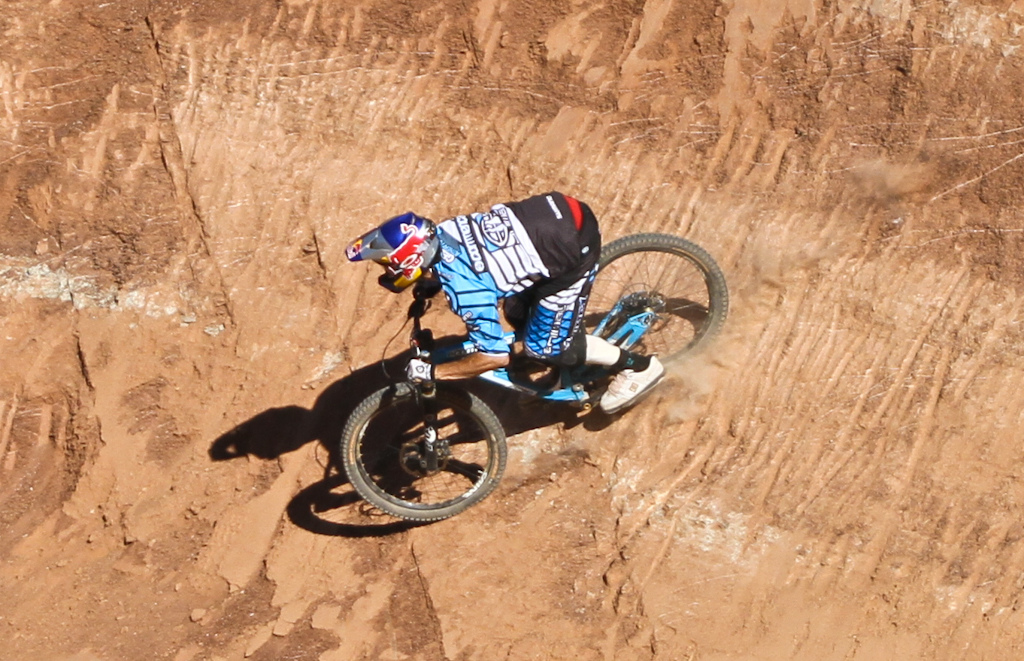 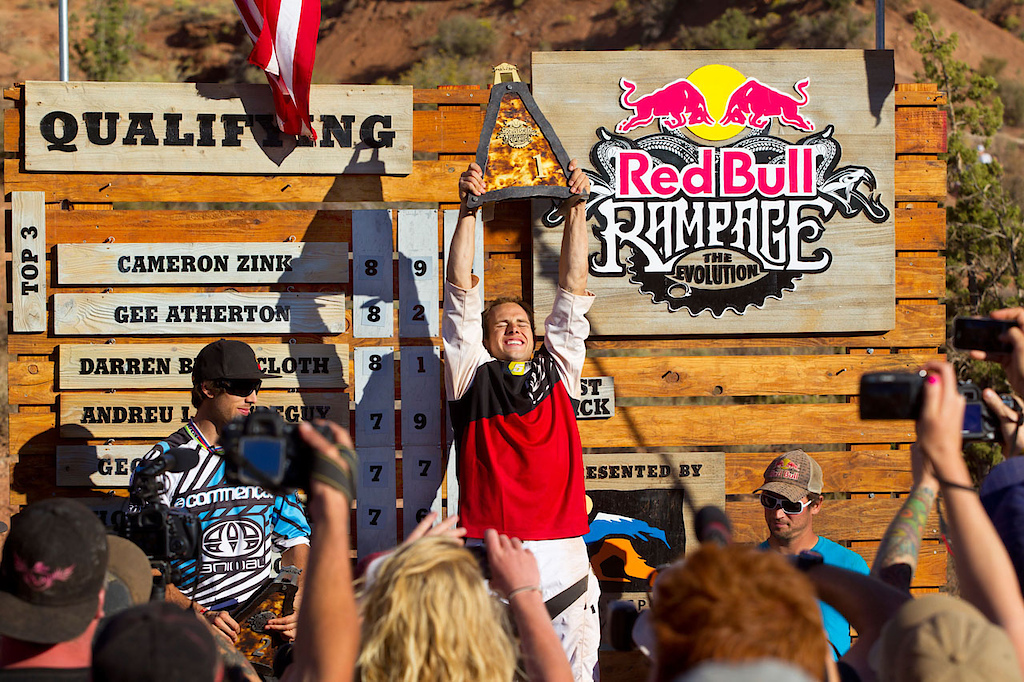 2012
It seems like Gee was never able to have two good years in a row as in 2012 he would crash hard both in practice and in finals. The crash during his final run is horrific to watch as he goes off line in the air and catches the side of a cliff and goes flying off the bike. Despite his history of crashing out at the event when he does manage to stay on his bike Gee has always placed in second and currently sits as the joint 10th most successful rider at Rampage with Antoine Bizet.

Preachey (Aug 8, 2019 at 13:31)
What's Gee's bag of tricks like? Unfortunately Rampage is basically a supersized slopestyle competition these days so I kind of assume his run will go like Brendog's last year - awesome, different, gnarly, scored 50/100

rraubenh (Aug 8, 2019 at 13:35)
not that I disagree with tricks being emphasized more in recent rampages than in the past, but there is a big difference between sending a 60ft drop and flipping/spinning a 60ft drop

Golden-G (Aug 8, 2019 at 14:16)
True story. It should be big mountain as it was in its inception. As much as the slope style stuff is rad, Brendog deserves to be on the podium for his run. Overly manicured runs and jumps have taken the even away from what once was.

onemanarmy (Aug 8, 2019 at 14:24)
@rraubenh: Agreed. And you can still do very very well with more traditional big mountain tricks. Look at Ethan, Sorge, Kyle... all of them have done really well without some of the Rheeder'esk tricks and Reed Boggs type Slopestyle additions to the course.

Gnarly is still gnarly and still gets scored well. I could see Gee sending an insanely fast and gnarly line that scored well with a handful of tricks like no handers and straight flips.

betsie (Aug 8, 2019 at 14:27)
I love that rampage saw the biggest feature hit by only 1 rider, nobody else has ever ridden that lip to wall ride and people still are obsessed with slopestyle. Make rampage, rampage and not slopestyle.

onemanarmy (Aug 8, 2019 at 17:21)
@badbietz: Right. If Dan's building for him it could be a pretty damned unique line. Plus it's fresh blood out there so it's not going to be an update to last years line... be a whole new line.

powturn (Aug 8, 2019 at 21:11)
Speaking of the nature of this competition, does anyone know how Gee qualified this year, having been out of the Rampage orbit for 7 years? Gee's still a hell of a DH competitor, but he seems an odd pick when so many of the Fest Series riders fail to qualify even though they go big w/ big tricks all year long.

Laymo (Aug 8, 2019 at 21:23)
@Veloscente: If you are famous, still competitive, and have finished on the podium previously you get special consideration. Might also help that he's sponsored by Red Bull. I'm stoked he's back, the top world cup racers are the most skilled in this steep terrain.

Altron5000 (Aug 8, 2019 at 22:52)
Agree. Seems kinda unfair to invite the likes of Brendan and Gee and then not score their flavour of riding well. They work their asses off in the dessert and put it on the line. Brendan’s face after scoring last year said it all.

fphayton (Aug 8, 2019 at 23:13) (Below Threshold)
@Golden-G: but the main rock drop on brendogs run was probably the most manicured feature on the mountain. Also his chute towards the bottom, they spent many hours chipping away rock to make it rideable not exactly raw is it.

fphayton (Aug 8, 2019 at 23:18) (Below Threshold)
@Laymo: lol not sure if your serious, there is barely any steep terrain in the world cups anymore, look at PEFS track in Andorra if you want steep.
I'll eat my words if you can show me a video of a World Cup racer hitting some proper steep chutes this year, the just raced down les gets on ski piste for crying out loud

kerberos (Aug 8, 2019 at 23:29)
@Veloscente: Check the 8-new-athletes-added... article where they explain this year's system as a combination of wild cards (Gee received one) and the new mechanism of some qualifying process to 'prove yourself' in September.

justinhoelzl (Aug 9, 2019 at 8:13)
even if rampage is a glorified slope contest, try turning your back to 3 a 50 foot drop, not sure it can get any gnarlier than that, the lines people are doing and then throwing tricks is nuts, wouldnt be opposed to a most technical award at all tho

joel4 (Aug 9, 2019 at 9:23)
@Altron5000: I think it's an inspired move to include racers through their wildcard invitations. Personally, I will be making the exception to watch this year precisely because Gee will be there. I generally have zero interest in slopestyle and therefore rarely make the effort to watch... However, racers on big mountain lines tickles my fancy! I would be very surprised if I'm alone in this view.

bigburd (Aug 8, 2019 at 13:25)
His big move on that giant stepdown/hip to wallride quater pipe thing is still one of the top moves of rampage for me, I remember seeing a photo of him landing it and his bars were flexed hard to the right, front wheel to the left and back of the bike all twisted off axis.

Albatrosse (Aug 8, 2019 at 13:31)
incredible feat of skill and strength, i dont think there are very many riders who would be able to ride out from that impact

hamncheez (Aug 8, 2019 at 14:02)
I watched him do it from the takeoff area (you can't see me in the video). I walked up to the take off after he did it, I stood on the takeoff itself, pondering existence. You can't even see the wall ride from the lip, and its facing a different direction. Still blows my mind.

Krzymndyd (Aug 8, 2019 at 20:46)
Somebody else did that first but wreaked hard. For the life of me I can’t remember who but that was never Gee’s line but he got remembered for it

bigburd (Aug 9, 2019 at 9:01)
@Krzymndyd: That feature was made by the redbull crew, the wall ride thing that is, the kickers were rider made think.

mikelee (Aug 8, 2019 at 13:34)
Such an all round mountain biker,so much skill and determination. 2 second place rampage finishes,2 times world champ winner and 1 time overall wc champion. Legend of the sport. Made of granite too.

chyu (Aug 9, 2019 at 4:36)
Being strict and focused on racing is their motto. Specialized Factory has it, Gwin once said it's tense til he moves to YT.

talhaslam (Aug 8, 2019 at 14:22)
This thread should be titled, "The history of mountain biking fashion and video editing." Man we have come a long way. But seriously Gee is the man, stoked to see him back.

Sweatypants (Aug 8, 2019 at 18:10)
I was there in 2012 to see that wreck. Took my breath away. He looked hurt the next day, but got up off it and walked away like a beast. His 2nd place run is still one of my all time favorites. 360s and backflips aside... its awesome to see the speed difference and level of attack from a top tier racer compared to a slope dude. Hope he does well, we'll be there watching.

soldenreturn (Aug 8, 2019 at 14:59)
Talk about standing by your product Atherton bikes gets a test on Rampage !! now that's what I call marketing

onemanarmy (Aug 8, 2019 at 17:23)
Yeah. I'm sure that is a huge reason for coming back to Rampage. It has the highest viewership of any MTB event. Crazy huge visibility and having Rachel down this year put a big dent in their plans for this year.

cristiantomlinson (Aug 8, 2019 at 15:21)
Total legend. Did you know he and his bro once did a UK DH race in the back yard of Highclere castle. Otherwise known as Downtown Abbey. A good friend of mine built the track. Circa 1990something

mmatthews (Aug 9, 2019 at 10:44)
Everyone who’s saying rampage is too slopestyle needs to go there in person to see how gnarly it is. Watching online won’t give you an accurate understanding of the runs. I think the judging has been pretty on point.

owlie (Aug 8, 2019 at 15:56)
I saw him walking around rampage last year with his entourage. Street clothes. I guess he was in Utah filming something. Cant wait to see him get after it this year

docnik (Aug 8, 2019 at 16:01)
Seems like you could actually be a spectator in the early days as opposed to standing at the finish line 100 miles away like last year.

sylvesterp3 (Aug 8, 2019 at 21:33)
Gee will ride the sickest line and then take off his helmet and it will be Rachel Atherton! And Rampage will never be the same again!

ChasingPhotons (Aug 9, 2019 at 2:55)
Granted I still usually watch Rampage but since it's turned into more of a a dirt jumper / slopestyle event, I find Hardline more interesting these days. I'd rather watch someone nail a steep as f*ck, janky technical run than do a triple backflip or whatever they're up to these days.

fneuf (Aug 9, 2019 at 7:40)
Am I the only one flabbergasted by the main picture of the "Best of Red Bull Rampage: 2004" retrospective video, featuring Gracia in the 2008 "commençal superteam" color scheme?