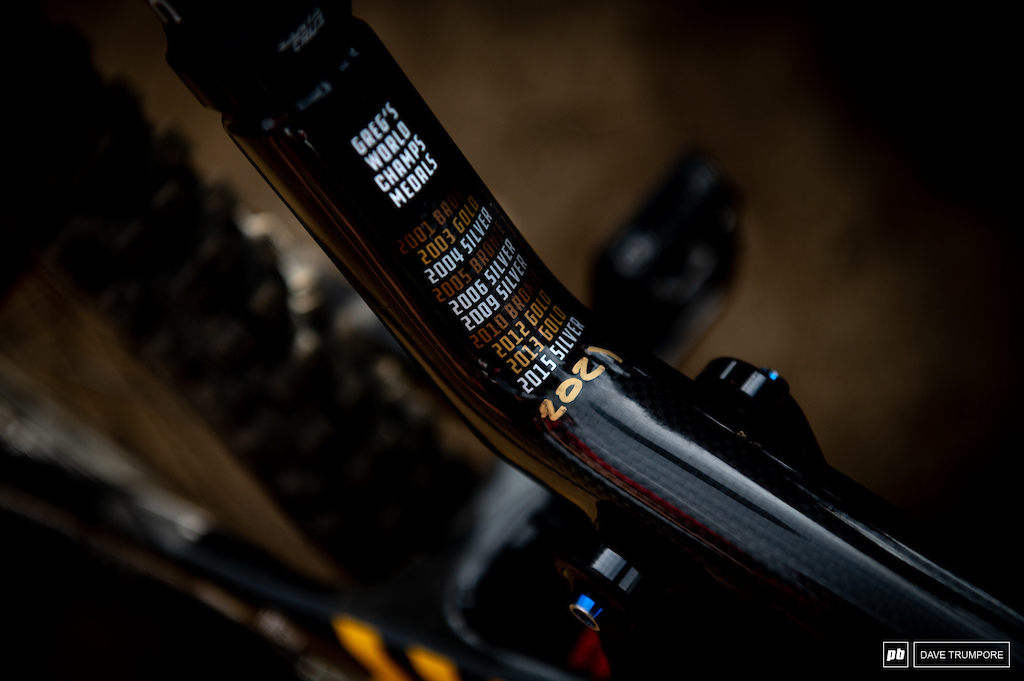 If there was ever any debate, Greg Minnaar might just have confirmed his GOAT status in the eyes of most race fans this weekend when he won his fourth World Championships to go alongside his 22 World Cup wins and 3 World Cup overall titles.

Minnaar has now been at the top of the sport for more than two decades and has shown peerless longevity in his racing career. Here is a run down of every one of Minnaar's World Champs medals in 20 years of racing.


Greg Minnaar's first World Championships medal almost exactly 20 years ago in Vail, Colorado. This was only Minnaar's second Elite World Championships race, but he came into it as one of the favourites after having clinched the overall title by just 12 points at the final round in Mont-Sainte-Anne. Minnaar ended the race third behind, of course, Nico Vouilloz, who was racing in his penultimate Championships.


Minnaar wouldn't have to wait long to convert his bronze to gold as he clinched his first Rainbow jersey on the slopes on Monte Tamaro just two years later. Greg overturned the unlucky 13 plate and took the win by just under a second from Mickael Pascal while Fabien Barel recovered from separating his shoulder 12 weeks earlier to take third.

The 2004 World Championships will always be remembered for the epic battle between Fabien Barel and Steve Peat but the closest challenger to the flying Frenchman was actually Minnaar who finished just over half a second back from Barel.


Greg Minnaar dominated in 2005 with 3 World Cup wins on the Honda Global Racing team and a lead of more than 700 points by the end of the season. On World Champs day though, it was Barel once again who pipped him to gold.


The first of three medals Minnaar won in the southern hemisphere came at Rotorua in 2006. That day was dominated by Sam Hill who finished 4 seconds clear.

Greg Minnaar came into the 2010 World Championships following a season-long battle with Gee Atherton for the World Cup overall. There's no doubt he was one of the fastest racers of the weekend as he topped the seeding session, but weather affected the final few riders and he had to settle for bronze.


Minnaar ended a 9-year wait for the Rainbow Stripes in 2012 when he took the win in Leogang. Minnaar had been the only real challenger to Aaron Gwin's dominant period between 2011 and 2012 and it came down to the pair again at the World Championships. Minnaar went into the hot seat and then knew his victory was assured after a tech issue for Gwin who acknowledge defeat with a legendary bar hump.


Minnaar became only the fourth male downhill rider ever to claim Elite World Championships back to back as he extended his reign on home soil in Pietermaritzburg. 2013 was the year that some riders tried enduro bikes and even 29ers for the first time, but Minnaar stuck with his tried and true V10 to power his way to glory.


Two years later and Minnaar was in the medals again, this time he had to settle for silver as Loic Bruni claimed his first of four World Championships in the next five years.

At 39 years old, Minnaar added a fourth World Championships title to his collection. At this point, he's simply peerless.

doncouzens (Sep 2, 2021 at 1:04)
Its amazing how the guys coped with small 26er bikes on some of the older courses, loamy and harsh. Also Greg has stood by his same sponsors for so many years, except Enve, who can forget the spoke going through the rim to loose him the overall to Gwin. I have often wondered if he pushed Santa Cruz to develop their own rims. Such a legend, so humble and so professional. Long may the GOAT Ride....

TobiasHandcock (Sep 2, 2021 at 2:01)
How many riders are still racing WC's today who featured in an Earth movie?

I can only think of Greg and Brendog, Sam Hill too if that counts.

lepigpen (Sep 2, 2021 at 0:24)
So crazy. The first video mentioned a tragic event and I was like oh did an east coast rider die in a race? Then I remembered what year the race was. 2001. Such a weird time in history where we all had to suck it up and go back to school/work after history's worst hijacking event.

It's also crazy to see how healthy Minnaar is compared to Aaron Gwin (knock on wood). Wonder if he can come close to the medal/cup count Greg has...

NorCalNomad (Sep 2, 2021 at 7:54)
Unless Gwin has a major change in mindset he won't. Gwin has said he's not going to train different because it DID work for him in the past. That sort of mindset doesn't allow you to be a top 3 contender for TWO DECADES.

microfiz (Sep 2, 2021 at 8:11)
@flattired: Lol! He's not that far off, you know. It did feel weird for everyone after that. The entire world's air travel was restricted for weeks while they sorted out security. And the worst hijacking claim is fairly accurate... can you name a hijacking event (of an airliner to be specific) that took so many lives and altered history?

Disclaimer: I am not a "natural" born American, and I have traveled around the world (not to mention I'm old). I'd like to think I have a reasonable world view.

lepigpen (Sep 2, 2021 at 12:05)
@flattired: Do you... Do you think the 9/11 attacks only affected US citizens? Was US the only one to engage terrorists in the middle east afterwards? Do you think there were no non-Americans on those flights or in those buildings? The 2 largest buildings in New York that mostly hosted businesses involved in the global economy?

It's only US-centered when you go out of your way to make it US-centered. That was an abysmal failure of the human experience for anyone who can feel emotions. To shrug it off as a US problem is an admission of a personality type I would hate to be accused of.

This isn't about gun-toting, patriotic nonsense either. ANY country or peoples going through such an event would be traumatized and deserve the support of their peers (as we did from many many countries that year).

tylerd99 (Sep 3, 2021 at 5:15)
@flattired: you are either to young to remember that tragic terrorist attack or just so anti American that you think all it effected was Americans, there was people from all over the world on those flights as well as in the world trade centres. As a Canadian who watch this in horror on tv I can say it effected me and my family

tylerd99 (Sep 3, 2021 at 5:20)
@lepigpen: yes I wrote a comment back to that dude, as a Canadian it effected me, and working for a defensive company I have worked on many vehicles that served in the Middle East after being blow up by ieds ending the life’s of Canadian men and women. It bothers me that someone can go through their life having views like that guy.

flattired (Sep 3, 2021 at 5:54)
I don't want by any means lessen the impact that the attacks had in people's lives in US and abroad. It's just that "we all' means 7 Bi people and history started more than 5000 years ago. If we broaden the definition of terrorist attack to the killing of civilians by the state or ethnical/religious/ideological groups, there were certainly worse days in history: en.wikipedia.org/wiki/List_of_events_named_massacres

@lepigpen was right, though: 9/11 was indeed the deadliest hijacking in history.

flattired (Sep 3, 2021 at 6:08)
@tylerd99: I guess you got me wrong but anyway: I am sorry if my comment caused you discomfort. I am sorry for the loss of innocent people in US, Canada, Middle East or anywhere in the world.

lepigpen (Sep 4, 2021 at 1:09)
@flattired: gatekeeping human suffering. now that's a new one. this is a very surprising perspective from someone of German descent. you should know better than anyone the effect of a seemingly local tragedy can have on the world. EVERY form of human suffering is worth acknowledging on a global scale. whether its a single mother in the US. or a single mother in west Africa. or a deadly terrorist attack. or a meticulous genocide.

regardless of location or time, the response to a tragedy should NEVER be "people here have it worse" or "people back in the day had it worse" or really anything other than respect towards the human suffering at hand.

if you have a small crash on the mountain... no one would pass by you yellin "you shoulda seen the stack i had last week! on your feet boy!!". when a mother in west africa struggles to acquire drinking water for her children, i feel horrible for it. it is not a west africa problem, its a human experience problem that people all over the globe work together to alleviate. there is no benefit to gatekeeping human suffering. every instance of human suffering is a failure of the human experience and any human of any origin should strive to alleviate it.

redrook (Sep 2, 2021 at 1:37)
"Minnaar wouldn't have to wait long to convert his gold to bronze as he clinched his first Rainbow jersey"

Shouldn't that be bronze to gold?

rallyimprezive (Sep 2, 2021 at 7:29)
Is it just me or do those older DH courses look like better DH courses than what we have now?

This one in 2001 with Minnaar on the podium with Gracia with the best jersey:

teamdoa (Sep 2, 2021 at 4:27)
@zoobab2 I am not sure what that even means, but how can e-bikes be a negative thing, if that is what you are implying? It gets more people riding bikes and is good the the industry as a whole, from manufacturers to bike shops, and also has the added benefit being good for peoples health and mental well-being.

innerloop (Sep 2, 2021 at 4:14)
Were there more safety nets and pads along the tracks in early days of DH racing? In the video from Lugano 2003 it seemed most extreme.
If this holds true, rider skills and bikes improved like hell in the last decades!

yoimaninja (Sep 2, 2021 at 5:42)
I was quite surprised by how rowdy some of those early 2000s courses still were. I cant imagine with the head tube angles at the time. Maybe that's why a lot of them were going OTB.

skierdud89 (Sep 2, 2021 at 6:53)
So many good memories watching these. Steve Peat finally getting it done still makes me tear up!

Rainozeros (Sep 2, 2021 at 11:49)
We should all call him God instead of Goat, cause GM not only is the greatest of all times but because he is ETERNAL!

samdeatley (Sep 2, 2021 at 5:36)
It’s been a long, successful career when you can track the progression of bike designs by one rider

watchtower (Sep 2, 2021 at 13:01)
Brilliant rider but an exceptional racer, congrats on yet another win.

Interestingly his 2nd place finishes tie with Peaty (4)
3rd place finishes put him at the top of that league with 3 (Sam Hill, Troy Brosnan and Mick Pascal were next with 2)
He's been 4th twice (Peaty wins with 3)
5th once (Bernard Kerr, Gee, Karver Kovarik, Cedric Gracia and Sam Hill all did it twice!)

you guys can make your own mind up

NorCalNomad (Sep 2, 2021 at 8:06)
What other rider (or any extreme sport athlete) has been at the top of the game (especially in a single discipline) for two decades? Only person who's done something like that is Slater the undisputed GOAT in surfing. Killian Jornet who's definitely a contender for GOAT in mountain running, but his top competitive time frame is only about 15 years.