This weekend, Jackson Goldstone not only won the junior World Cup in Les Gets as a first-year junior but he did so with a time faster than any of the Elite racers too. Of course, the conditions played a part in this but it sees him follow in the footsteps of Finn Iles and Vali Holl, two incredibly successful juniors that are now among the fastest racers in the World. 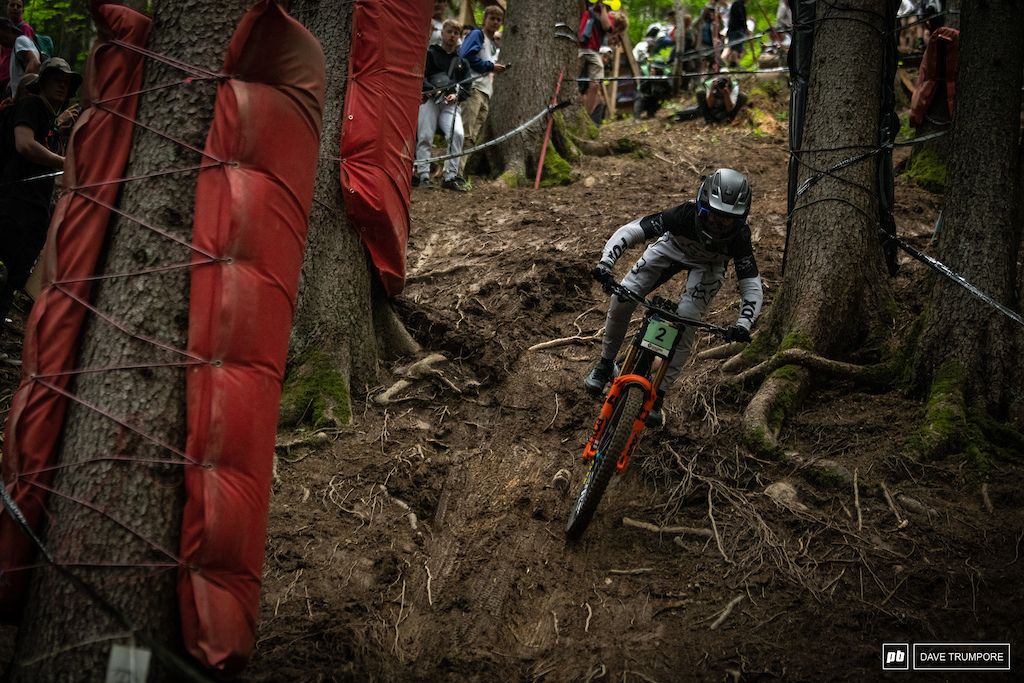 Jackson's first elite World Cup win was impressive but for most fans it has been a long time coming. Today, we're taking it back to 2010 and the first time Jackson Goldstone came across our radar. Published almost 11 years ago to the day, 'Jackson Run Bike to Kindergarten' is the most-watched video on Pinkbike's player with more than a million views. It shows Jackson take the scenic route to school with visits to the skatepark, some trails and a bench drop to flat.

Since then he hasn't rested on his laurels though and has been steadily working his way up towards World Cup racing. Here are the highlights of Goldstone's rise from kindergarten shredder to World Cup winner. 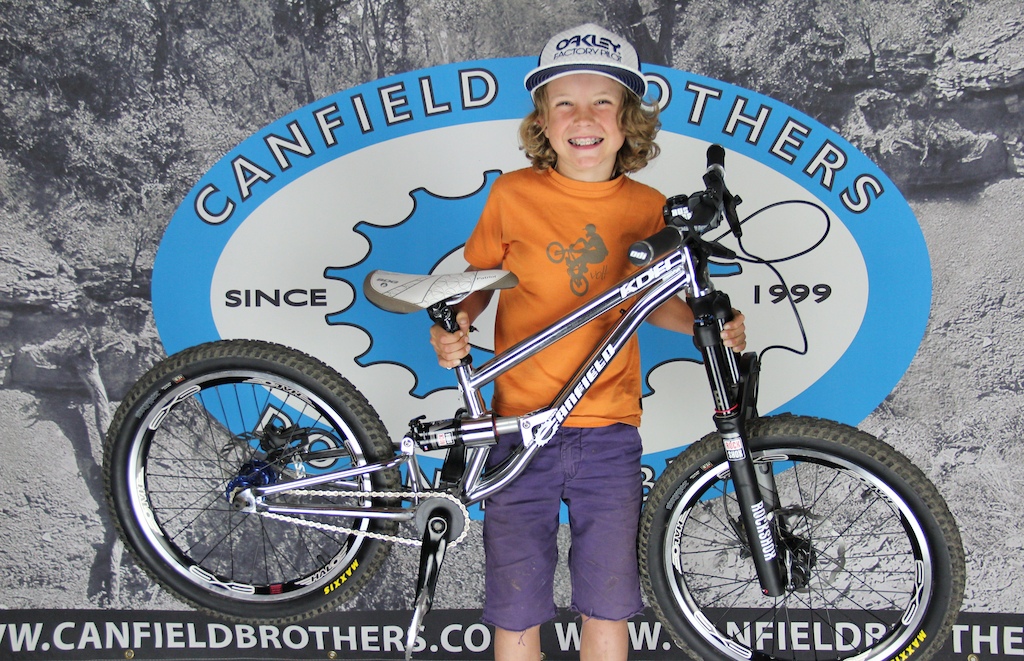 Canfield started its KDH project as a way to provide bikes for the next generation of shredders so there was no better test pilot than Goldstone. With 120mm travel, 20” wheels and a concentric BB pivot design, it was designed to give the feel of a full DH bike, only scaled down for small riders.
Jumping the Woodward Megaramp at 10 Years Old


by WoodwardMTB
Views: 119,254    Faves: 364    Comments: 41
Goldstone showed how he was getting on with the bike a year later when he hit the Woodward Megaramp for the first time
Riding Whistler with Stevie Smith


by oakley
Views: 60,557    Faves: 462    Comments: 15
Jackson showed he was a racer as much as a freerider in 2015 when he featured in this edit ripping with Stevie Smith. RIP Stevie.
Racing success at Serfauss Fiss Ladis

The iXS Rookies Championship is the biggest proving ground for riders too young to race World Cups. Jackson has been making the trip over to Serfauss to race there since 2017 and has earned a silver medal and two wins in his age class. This video shows him riding in the area in 2018.
Picking Up a Trek Sponsorship 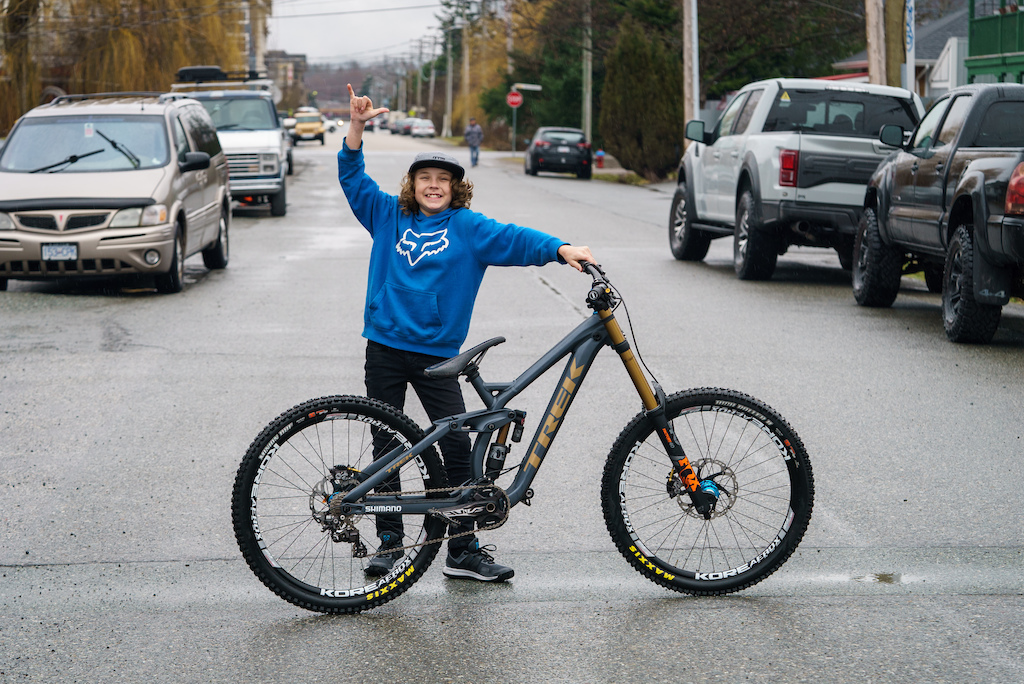 Jackson first picked up his Trek sponsorship in 2018 and has stayed with the brand ever since. Check out our bike check of his custom extra small Session on new bike day, here
Becoming a regular face at Freeride Events

Audi Nines, Crankworx, even FEST Series, Jackson has ticked them all off before he's old enough to drink.
Winning Whip Offs at Crankworx Rotorua

More than just competing though, Jackson actually won the Whip Off at Crankworx Rotorua last year on a tricky, windy night.

For myself, I’d love to meet JG and shake his hand. I’d be surprised if he wasn’t absolutely stoked that he was inspiring generations much older than he.

melanthius (Jul 8, 2021 at 10:07)
I know what you’re saying, but screw this sentiment. One of the worst things that instant global media has done is convince a huge swath of the population that it’s only worth doing anything if you can do it professionally.

Riding bikes is fun. Getting better at riding bikes is fun. Same with singing, dancing, making music, drawing, woodwork, running, writing, and every other thing that can be enjoyed as a casual interest through a career. Don’t let the fact that some people are amazing at something you enjoy get in the way of you enjoying it.

TotalAmateur (Jul 8, 2021 at 11:32)
@melanthius: never meant to discourage anyone! Just saying the internet has given a platform to so many people, and I think most of us amateurs are surprised to see how much talent other 'amateurs' have. Which becomes slightly soul crushing the younger they get lol. But I'm all for continued progression! Keep riding, practice your scales, drill hard, measure progress. 2022 Be f*cking better.

friendlyfoe (Jul 8, 2021 at 12:02)
@TotalAmateur: Most of anyone who has participated in a competitive sport has had the experience of getting trounced by the most talented local athlete, only to see that athlete barely be competitive at a higher/national level. If I only did things that I was the best in the world at I'd never get out of bed. Napping....I might be able to win a world championship in napping.

TotalAmateur (Jul 8, 2021 at 15:38)
@friendlyfoe: why does everyone keep thinking I'm saying only do things you're good at? lol. Literally never said that

TobiasHandcock (Jul 9, 2021 at 19:06)
Nah, The dude has worked so hard all his life at this. It's not like he's just some super talented rider who just turned up yesterday. He's put in his 10,000 hours. Let that be inspiration to keep working.

TobiasHandcock (Jul 9, 2021 at 19:08)
@TotalAmateur: Make sure to throw in some arpeggio cornering drills once or twice a week even if you can't get out for a long ride.

lacykemp (Jul 8, 2021 at 10:33)
Jackson's whole family is worth mentioning. His mom is amazing and his sister, Bailey is also racing world cups too.

timrippeth (Jul 8, 2021 at 9:45)
Showed the kindergarten run to my 3.5 year old son. All smiles. Absolutely loved it. Headed straight out to the garage for some laps on his balance bike.

thechunderdownunder (Jul 8, 2021 at 7:19)
It feels like this just dropped yesterday. Time flies.

bigdawgmike (Jul 8, 2021 at 7:30)
Iron balled McGlinchy on the balance bike, I feel for his Jacobs crackers

OlSkoolJake (Jul 8, 2021 at 11:54)
Like it's been stated.... Jackson time to be in the spotlight has come. His future in MTB (no matter what route he takes) is bright. One day there will be a little grom on a run bike. Pretending they're Jackson.

djyosh (Jul 8, 2021 at 9:48)
This is why I am in no rush to get my 3 year old on a pedal bike. Want him to be super comfortable on the balance bike and be able to hone his handling skills. He could definitely use a brake though - the toes of his shoes and boots take a serious beating with his current double foot drag braking system...

Niseach1 (Jul 8, 2021 at 14:10)
Incredible. It'sworth checking out Joe Barnes' Instagram to see the progress of his 2 year old. Scary to think where mountain biking is heading with the bikes, coaching and terrain available to very young kids these days.

neimbc (Jul 8, 2021 at 5:47)
Let this be a lesson to you young kids out there - spend your time doing something other than video games - and you just might get somewhere with it! (meanwhile, my boys are video slugs. So sad I am.) Way to go Jackson.

rarerider (Jul 8, 2021 at 6:05)
Or play video games A LOT and you just might become a multi millionaire through twitch streaming, youtubing and playing professionally

Narro2 (Jul 8, 2021 at 6:09)
Depends on the video game but the gaming world is pretty awesome too. Lots of kids have made a career out of videogames just like jackson. Dont ever look down upon someone elses hobby, specially your kids'.

Look at the % of kids wasting time sitting around playing games to the select few who make a living. They’re statistical outliers.

true....but on the same hand, jackson goldstone is also a statistical outlier.

endurogan (Jul 8, 2021 at 7:40)
@meathooker: I spent my whole childhood riding bikes and now only have plates on my bones and concussions to show for it

Bomadics (Jul 8, 2021 at 9:40)
What it says in my opinion, is be passionate and positive about anything, and you will do well. Being successful is more about ones mental state than actual money or accolades.

countzero1101 (Jul 8, 2021 at 10:01)
@rarerider: In my personal experience, the wear and tear on your wrists only really supports one of those activities, either e-sports (yep, that's what they call it these days) or MTB, happy(-ish) wrists. I opted for the latter.

Eric from BCPov is another good example, he is or at least was a hardcore gamer, i notice it in some of his word choices, he worked at a game developer for some time too, and Yuka his wife is or was collecting all the wild Korok Seeds in Zelda BOTW, thats a 100+ hours of Sidequests and NPC interacting, if that's not thats hardcore gamer i dont now what is.

Bottom line both hobbies could be easily balanced.

I’d say avid gamers are like bikers, from most walks of life. The big difference being if you go pro, you’ve got a chance to make money as a gamer lol

Superfly1st (Jul 8, 2021 at 8:09)
Rode with him in Serfaus in Austria and produced some nice course previews. Super nice guy and comes from good stock. Dad Ron is also a legend, a pleasure to know them both!

OldDert (Jul 8, 2021 at 9:29)
What type of rear suspension run bike is that? I think i used to know but can’t remember now that my son is about ready for that.

maybenotaprofile (Jul 8, 2021 at 5:52)
Deathgripping skinnies on a pushbike... That's the real confidence.

DirtyDee (Jul 8, 2021 at 13:58)
There is a real possibility that he could have his first Elite DH win before Finn does.
Post a Comment