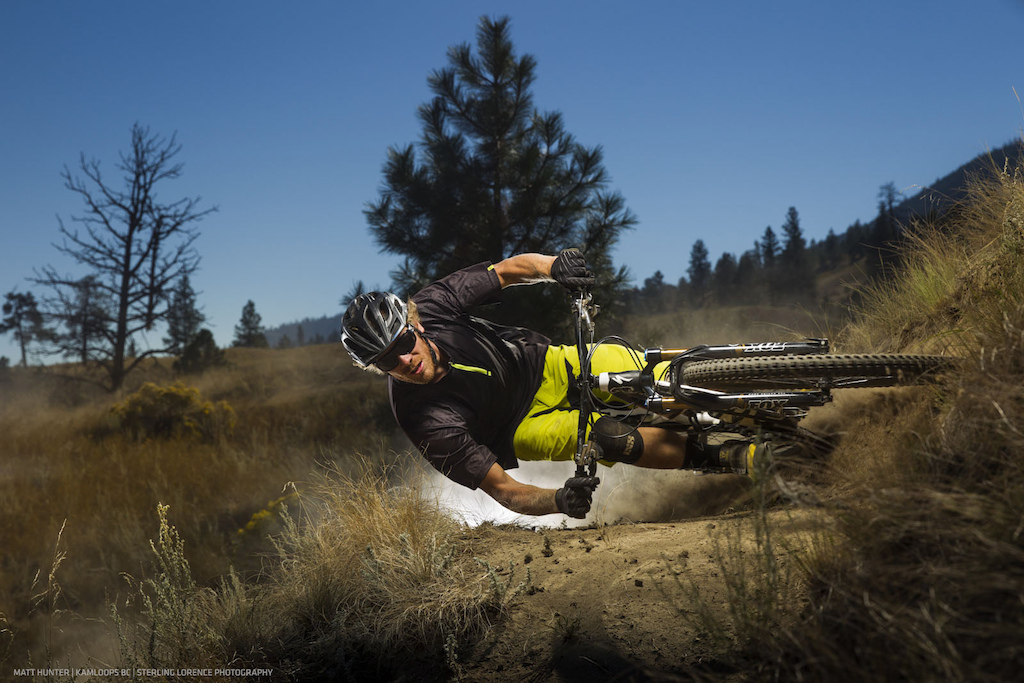 When Sterling Lorence posted this incredible photo on April 28 2014, it's safe to say it turned a lot of heads. Not only was Matt Hunter cornering almost completely horizontally, but he was doing so on 29" wheels, something that the detractors at that time said was impossible on a wheel size that was supposedly awful for going round turns.

The photo was taken on one of Sterling's annual trips to Kamloops to visit Matt and plot out some photos. This wasn't about shooting a particular product or campaign, simply producing some stoke-inducing imagery. He said, "There was no assignment, it was simply doing what we wanted on something that we hadn’t tried before. This kind of pure freedom of creativity always provides good results."

The shot was captured on a gulley trail on the Kamloops Bike Ranch created by local builder Brad Stuart. After seeing Matt ride through it, Sterling spent some time lugging over a lighting set up, getting everything tuned in and then 15-20 attempts later the shot was captured. For all the photography nerds, Sterling shot this on a Canon 1D Mark IV with a Canon 24-70 mm f/2.8 lens, 1/640th of a second at f5.6, ISO 50 and there were 3 lighting strobes striking Matt.

The photo dropped to equal parts admiration and disbelief, comments on the original picture included, "Photoshop, blow up the pic and looks like cut lines from another pic", "That's an awesome pic, all it is though [is] just three layers. 1. The background picture 2. The guy on the bike (rotated) 3. The foreground," and "Photoshop or an epic bail.... but I'm leaning towards Photoshop."

However, that disbelief went way beyond the Pinkbike comments, Sterling told us:


To prove its authenticity, Matt and Sterling had an ace up their sleeve. It wasn't just Sterling that was shooting in Kamloops with Matt but Anthill Films too. Posted a week after the original photo, this clip was titled 'Getting the Shot' on Pinkbike and 'Matt Hunter Goes Around a Corner on a Bicycle' by Specialized on YouTube.

That video took Video of the Day then the photo later took Photo of the Day, Photo of the Month and finished second to Photo of the Year only to Christoph Laue's incredible composition from Chatel. Not bad for a morning's work. 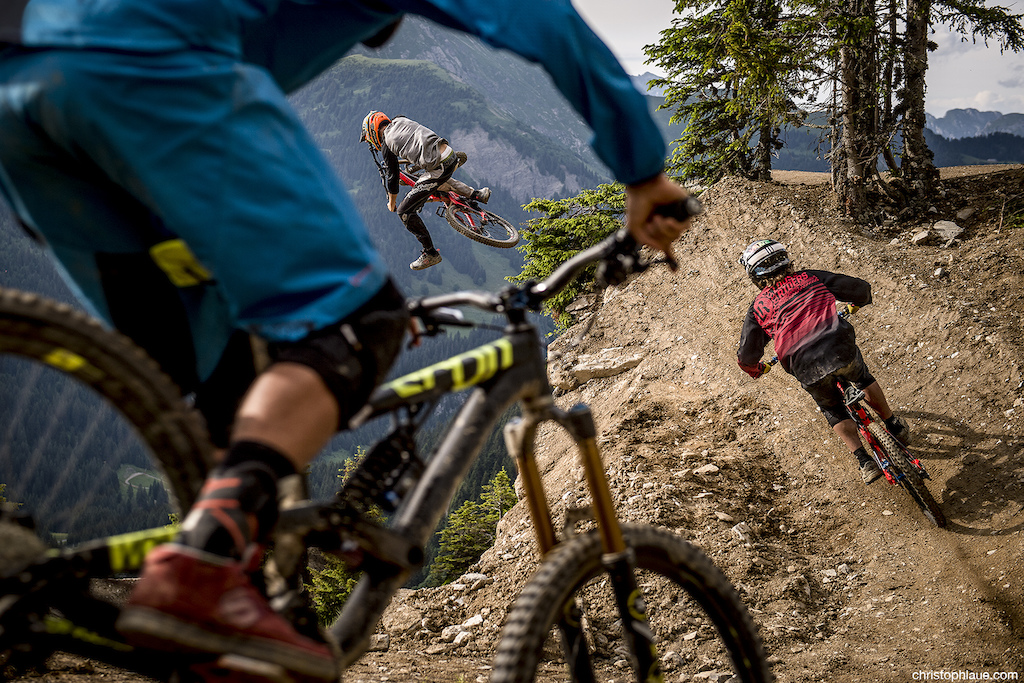 Christoph Laue took the top prize in the 2014 Photo of the Year but Sterling's shot still took second and a cheque for $3,000

valleytroll (Jul 15, 2021 at 10:04)
This is gonna be so good! Wont get old for months. Let the people speak! Sock it to the man! Also commit your new alliance to Vital bit meanwhile spend more time on PB checking all the sarcasm.

stumphumper92 (Jul 15, 2021 at 13:10)
PB cannot say they did not expect this reaction from an already heavily critical comment section

nsteele (Jul 15, 2021 at 13:25)
Every article we need to upvote the revolution to the top comment, regardless of what the article was about!

Beaconbike (Jul 15, 2021 at 20:23)
Everything everywhere is advertising already. Now it will be extra obvious on PB

stumphumper92 (Jul 16, 2021 at 6:56)
@Joeysolo: I caved and subscribed to YT premium due to the amount of content i watch and hatred for ads. Add in the fact they now have 3 ads in a row multiple times in a 10 min video... They know what they're doing. Also the bs fact that you cannot play vids if the video isn't on the screen. Such a stupid feature to disable...

DBone95 (Jul 16, 2021 at 9:08)
@brandonschuh: Holy moly, I know you're speaking English, but it looks like Chinese! In all seriousness, thanks for that, I will do some googling because I watch 90% of my content on the TV and the adds are super annoying.

suspended-flesh (Jul 15, 2021 at 9:44)
Waiting patiently for the Friday Fails opening sequence showing PB casing the jump to Outside.

Pinkbike 2.0 should also launch with an ICO!

mountaincross (Jul 16, 2021 at 9:44)
I thought that's what this weeks opening sequence was. Looked similar, at least.

toast2266 (Jul 15, 2021 at 9:46)
This is neat and all, but when are we gonna see some hard hitting journalism on 7 Must Have Gadgets That Every Mountain Biker Needs? Come on Outside. Get your shit together.

Dangerous-daveo (Jul 15, 2021 at 20:41)
I was kinda on the wait and see side of the fence, but this morning in my google feed thingy, an Outside article popped up which was "I went camping as my Dungeons and Dragons character"... That said, wasn't behind a paywall...

bananowy (Jul 16, 2021 at 9:33)
@Dangerous-daveo: haha I've noticed that when I went to Outside's page to see what crap they were trying to sell over there. Facepalmed hard. And that was under the "7 dog training tricks that work on humans", not even kidding.

Almostredbike (Jul 15, 2021 at 9:53)
6 months we will go the above to this: www.outsideonline.com/culture/food/how-to-become-an-awesome-vegetarian-cook

PauRexs (Jul 15, 2021 at 14:02)
Being vegan plant based an mtb Gravity competitive rider is compatible, you lose weight, gain flexibility and increase strength

Better than PTFE, which is a forever chemical!

Reno233 (Jul 16, 2021 at 9:19)
Beta magazine is probably working on that already, but it’s hard to fit it in between their social justice articles.

WayneParsons (Jul 15, 2021 at 10:44)
Keith Wilson built that trail. It is a part of the XC loop in the Bike ranch and was used in the National Championships about a decade ago. I know that corner well, as I (and many others) have tried to emulate Matt’s laid out turn but none of us could even come close.

Bomadics (Jul 15, 2021 at 9:45)
It's the body positioning, he is so freaking relaxed it makes it seem fake. Ohh, to be that comfortable on a horizontal bike!

Richridesmtb (Jul 15, 2021 at 13:36)
That photo is not possible because that bike has the wrong geo, too slack in the seat, head angle too steep, the wrong dampers in the suspension and the assegai wasn't even invented. So it really is fake. Pinkbike comments told me so.

mikekazimer Mod Plus (Jul 15, 2021 at 10:21)
@SATN-XC, I'm not exactly sure. I feel like the Hardline event is sort of its successor, with all those big features on a wild course.

Jaib06 (Jul 15, 2021 at 13:15)
@mikekazimer: Wales is pretty and all, but Chatel's vibe and scenery certainly increased the "nuts-ness" of the event. And I've never understood Hardline being a race, its huge hits and massive features lend it self to being a mixed judging event, like rampage, or speed and style. Riders like Kaos, who may not be the best at tricks, or the fastest, but are very good at everything, need a race to shine.

thenotoriousmic (Jul 15, 2021 at 17:42)
He’s goated. His season’s segment is still nuts to this day. That’s my idea of hell, being sent down hills at that speed with hard compound 26 inch tyres and 625mm wide bars. Legend.

look-out (Jul 15, 2021 at 14:34)
People thought it was fake, but how could they think a person in the industry like Sterling could produce and release a fake to the public? Back then, I admired the photographer's workshop and creativity and rider's skills. I admire them today. Amazing, one of a kind work.

bombdabass (Jul 16, 2021 at 2:02)
PB: Quick put up an article that gets users all warm and fuzzy with nostalgia
Users: Thanks PB, another opportunity to say 'back in the day when things were free'
PB: Jeez stop the ride, I want to get off, every comment has the word paywall in it.
Users: Paywall

swenzowski (Jul 15, 2021 at 12:36)
It looks like a really steep berm which I love. Would be cool to see some pics of other people doing this corner for comparison.... ...so that I can appreciate this corner when this pic is behind a paywall YEAAAAAHHHHHHHHHH

Thegnarberries (Jul 15, 2021 at 10:43)
Whats wild is that his front foot is the right foot so my guess is this is opposite of what his natural turning direction is.

deez-nucks (Jul 15, 2021 at 14:54)
@smokingtires: same… feet level for sure right turns. One foot down, still better with the right foot down turning left.

And here I am years later on my specialized 26er that I purchased that year shortly after specialized said they would keep building them because there was no point building 27,5 bikes if you wanted agility. Haha what a laugh.

CheryBomb (Jul 15, 2021 at 14:36)
So pumped up for the upcoming Pinkbike's challenge with Beta MTB when both teams will be racing those extreme head tube angle Dick Pound bikes!

heatproofgenie (Jul 15, 2021 at 11:09)
Monetization of old content now even!
Below threshold threads are hidden

skerby (Jul 15, 2021 at 10:28)
It's a little sad looking at pictures from this era, knowing full well that the slow march of trail/bikepark gentrification will keep anything this rad from being possible ever again.

mikekazimer Mod Plus (Jul 15, 2021 at 10:39)
Damn, that's such a negative attitude. Do you really think that the underground trail builders have packed up their tools and taken up rollerblading?

skerby (Jul 15, 2021 at 11:42) (Below Threshold)
Mike, I was just trying to write some profound stuff. I dont actually feel this bad about the current state of trails. I will say that the lift served bike parks I ride seem to get a little worse every year.

Don't get any ideas.

Bob-Agg (Jul 15, 2021 at 15:34)
@mikekazimer: I hope the underground builders responsible for that crappy race down a mine have given up.

Same but different but the same.

@mikekazimer : honest thoughts on why no one has made an electric DH bike? Designed around a 40/boxxer and rear linkage designed with only descending performance in mind.

L0rdTom (Jul 16, 2021 at 10:03)
@bananowy: it's certainly close-ish, although still with geo numbers from the Enduro. I'm more thinking something like this with a motor and leave the dual crowns on:

Sethsg (Jul 15, 2021 at 10:04)
Awesome photo!!!
Just a side note can you moderators start banning people, who won't stop going on and on about this paywall thing they are so worried about? It is getting incredibly annoying that they cannot shut up about it and stop acting like a bunch of spoilt little children.

quesoquesoqueso (Jul 15, 2021 at 18:38)
@Blackhat: no, theyre clealry trolling the staff , and the comments with off topic remarks. you are just justifying by saying its mainstream.

Sethsg (Jul 15, 2021 at 19:27)
May I respectfully, ask why everyone is so enflamed by the topic of a pay wall, Mike Kazmier already said there won’t be one. And it wouldn’t make sense for Outside to do that they already have Beta for that and they would know that most of us would leave if they did that. I imagine the only major difference will be more sponsored posts like we recently saw for helmets.

The sad bit is that Pinkbike is now just a page in Pocket Media's portfolio and will have the life, and every cent, squeezed out of it.
Post a Comment