'The Greatest Show on Earth' is how Dirt magazine described Fort William's World Cup in 2005 and it still holds up today as one of the greatest downhill races of all time. For some, it marked the beginning of a dominant era of World Cup downhill by the Brits as two legends of the sport took the victories in Tracy Moseley and Steve Peat but they were pushed hard by an emerging crop of young talents.

There was plenty for Brits to cheer about throughout the weekend, from Brian Lopes wearing a Tam O'Shanter to 4X getting its first streakers to Tracy Moseley reclaiming her Fort Bill crown in a Brit 1-2 with Rachel Atherton. The fans would head home happiest about one result though - Steve Peat winning on home soil for the first time.

This would be Peaty's fourth visit to Fort William as a racer, but he had actually been journeying up to the Scottish Highlands all his life to watch his father compete in the Scottish Six Day Trials. As a rider, Peat had been on the podium twice before but never made the top step. He came into 2005 looking to change that though. He later told Dirt Mag: "It's no understatement that I wanted to win badly at Fort William and because of this maybe I put too much pressure on myself for the first few years. Coming into 2005 I felt that I just needed to settle in and ride for me, not for the fans. It’s always an awesome atmosphere and it’s hard to get from our pits to the chairlift, sometimes I just have to get my head down and crack on. It’s not because I don’t want to sign autographs or chat with people, it’s because I have to get on with the job in hand!" 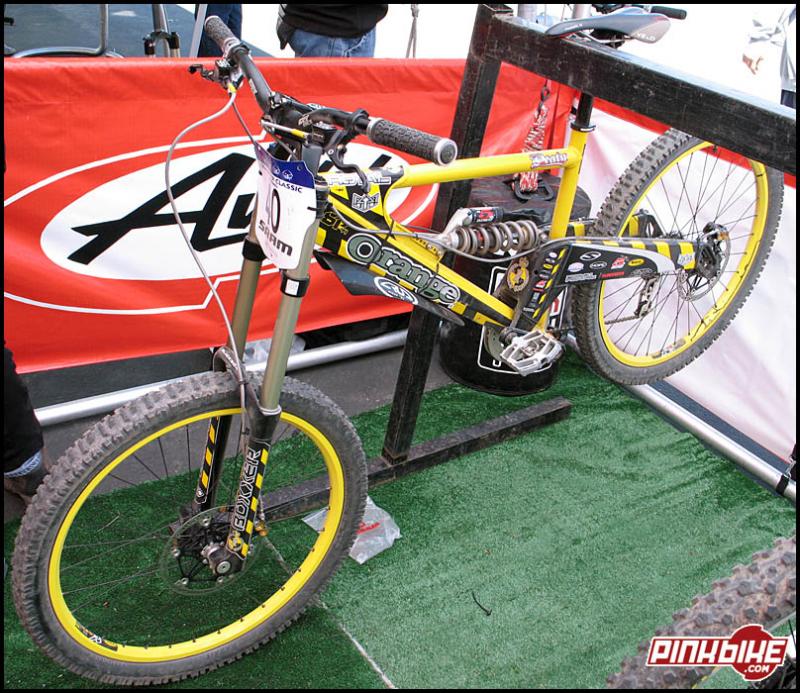 Peaty's Orange 224 photographed in Sea Otter earlier in 2005.
Steve Peat was reigning World Cup overall champion at the race and had won the first World Cup of the year, but a separated shoulder racing 4X after that meant he'd had to sit out most of the races. Fort William was unusually the last round of the season in 2005, probably in preparation for hosting the World Champs two years later, so while other riders had titles on the line to worry about, Peaty could put all his eggs in one basket and go for the win.

He qualified fastest, which no doubt added even more pressure to his weekend, but he cooly and calmly delivered when it mattered, winning by more than 2 seconds from his future teammates Greg Minnaar and Nathan Rennie. It was a momentous occasion - a British rider on a British bike winning on British soil. The crowd went predictably insane as you can see from this fan cam below:

Tweet
Must Read This Week
A Complete Timeline of Coronavirus' Effects on Mountain Biking [Update: US Open of MTB Cancelled]
140392 views
Behind the Numbers: 5 Trail Bikes Compared
60256 views
Video: ReTyre is a Modular Tyre That Lets You Zip on the Tread You Need
54659 views
Cannondale and GT to Reject Traditional Mid-Year Model Structure
51335 views
Ridden & Rated: 13 of the Best Dropper Posts
43356 views
Santa Cruz Bicycles Releases Mixed Wheel V10
43051 views
Yeti Cycles Will No Longer Use the Term 'Tribe' in Marketing
42229 views
The Best Tech From EWS Races on the British Isles
40928 views

I get that courses were smoother, but you can see how unstable those bikes are longitudinally.

Jpatfrancisco (Jun 11, 2020 at 22:37)
@phops: Some of the courses were way rougher than what we see these days... But it's amazing that these guys could win races without super boost spacing and 28.99mm crank spindles...

I have an engineering degree.

When working on race vehicle design in other industries, like moto or cars, there is quite a bit of testing, calculations, and adjustments that go into making it work. For example, with cars, if you are making a race car, you most often always lower it and widen the track, because engineers understand that side to side CG shifts in cornering are detrimental to traction. In the same way, different wheel sizes are chosen based on the required tire profile (within limits of regulation), driver cockpits are adjusted for the particular driver, CG is balanced to a certain point fore/aft, and so on.

All of this is also tested and verified with data acquisition, and the cars that race are VASTLY different from consumer cars.

So there is no reason why a well funded race program should result in a racer, especially someone tall like Minnar, riding the same geometry bikes that are sold to consumer. Even if you don't have the technical know how to understand how lengthening the bike will affect the handling, you could simply build prototypes and test them in the offseason.

In school, followed by racing motorcycles. Got into MTB after the fact

pourquois-pas (Jun 11, 2020 at 4:40)
How many times has this happened, home country victory in a bike HQ’d in said country (could do manufactured in but would rather not debate country of origin on bikes with parts from all over the world).

Stevie at MSA on Devinci (Devinci May have even welded that frame domestically if I recall?)

Pierron at Les Gets on Commencal.

Surely there are more...

And what about Rachael winning in Fort William on her own brand of bike? That's pretty special.

theberminator (Jun 11, 2020 at 2:55)
I remember seeing peaty win a national on his first orange at Hopton with pretty much a dislocated ancle, thay had to gaffer taped his ancle and shoe up to stop his foot rolling off the pedal, he still won by about 10 seconds, how he beat the likes of Dan Atherton and other locals down Hopton like that il never know....

Tom00Harrison (Jun 11, 2020 at 5:19)
I was in the grandstand that day so my view was exactly the same as that second video clip. I vividly remember him coming through the arch with just enough time to make it to the line and the crowd exploded. It was the loudest few minutes of my life.

xTwoSnakesx (Jun 11, 2020 at 0:19)
I always get confused, is Scotland Britain? It's part of the island of Britain, but isn't culturally considered British?

wisey (Jun 11, 2020 at 0:29)
Scotland is Britain, yeah. The British Isles are the whole lot (including Ireland), Great Britain is the biggest island which includes mainland England, mainland Wales and mainland Scotland.

For example, a Scottish sports person would be classed as British if they were very successful in what they do, such as Andy Murray, Danny Mac and more. However once they fall from grace they are classed as Scottish again.

The same applies to the Country, and as long as they keep making world class Whisky, and frying everything in sight, they will be classed as Britain. :-)

Let's not forget the UK which is the United Kingdom of Great Britain (defined above) and Northern Ireland. That's the actual country state.

This seems to confuse people including Pinkbike who let you have Scottish or Welsh flags but not English flags only UK union flag . One step of devolution too far Pinkbike!!!

Cammy14 (Jun 11, 2020 at 2:15)
@wisey: *braveheart plays* *pipe music* SCOTLAND SCOTLAND SCO...yeah these guys are spot on more or less. Scottish people are technically British, but I (and I would assume most scots) would consider myself Scottish

mick31w (Jun 11, 2020 at 2:40)
Most jocks don’t like being part of Britain, I’m English and live in Scotland, brilliant part of Britain but the “I’m Scottish and proud” mentality and all the anti English shite gets boring real fast

kevkir (Jun 11, 2020 at 3:50)
@wisey: Agree on the British isles, but I think most people are referring to Great Britain when they say British which is England, Scotland and Wales. Only make the distinction as the definition of british ilses might lead people to think Ireland is part of Britain which it isn't. I'm sure theres a technical definiton about IOM etc. Also the UK (for those interested) is the United Kingdom of Great Britain and Northern Ireland

aschark (Jun 11, 2020 at 3:54)
@wisey: @xTwoSnakesx: I say this as an American living in Ireland but it should be clarified that the term 'British Isles' is a more dated geographical term and isn't used as much anymore. Although you are correct in its terminology.

thewho07 (Jun 11, 2020 at 4:17)
@mick31w: Most jocks? No wonder you experience this mentality in Scotland with that attitude. If you had any idea you would realise that most of us love being part of the UK. Anti English will always be there, as Anti Scottish will be in England. Anyone with half a brain puts that behind them and actually realises it's joke.

If that was the case then Scotland would be independent ya jockstrap.

@LancaCruz, I'm not sure it's possible to be a patriotic English person parading the St George's cross without being viewed as racist (or associated with some dodgy far right organisation). Shame that so e people feel we should be ashamed of our nationality, I can't think of another nationality where this is the case.

I am now pro indy due to the current shit show of a government south of the border.
Welcome to Scotland btw

Lemmingie (Jun 11, 2020 at 13:09)
@wisey: As an Irishman living in Yorkshire, from my travels around Britain, fewer than one might think. I've been asked if Ireland is still part of the UK, if I'm from the "northern bit or the southern bit", or "Southern Ireland" (that name doesn't exist and hasn't since the early-mid 1920s), and all sorts of variations in between, including whether my home town (Dublin) is "up north".

Forget about asking about the British Isles; good odds on a bet of someone getting that one wrong from my experiences, or failing to give the full name of the UK, being the United Kingdom of Great Britain & Northern Ireland.

MartinKS (Jun 13, 2020 at 14:54)
@mick31w: I was in England and Scottland for holiday.
The most commen thing the scots told me was:
"We (the scotts) are much nicer, then the english people, aren´t we?"
Of corse with that scottish accent.

therevfryslim (Jun 12, 2020 at 6:09)
I rode Wharncliffe a couple of times in 2008, always hoped I would see Peaty there. Great trails and I don't think we even scratched the surface of what was there.

Radley-Shreddington (Jun 11, 2020 at 3:54)
English people consider Scotland to be British when England are out of the world cup and Scotland are still in it.

AyJayDoubleyou (Jun 11, 2020 at 4:52)
@dingus: generally every country that drives on the left, for now nonsensical historical reasons - from back when bikes had a rod brake front and fixed gear back.
Motorbikes are a worldwide standard right-front (and left-clutch); so why anyone that rides both doesn't have thier bicycle this way round is beyond me.

Lanebobane (Jun 11, 2020 at 6:50)
@AyJayDoubleyou: Thanks for explaining, that makes sense! Now imagine having clutched drivetrain on your bike, that might be cool!

AyJayDoubleyou (Jun 11, 2020 at 0:50)
Apart from the tiny handlebars and huge shin pads, visually, not a huge amount has changed.