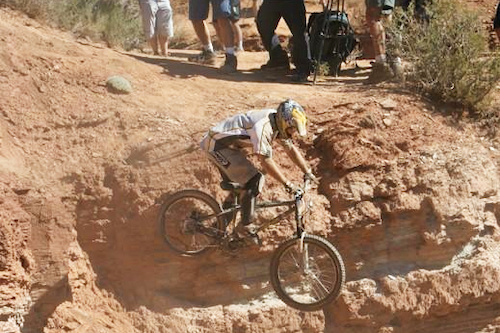 Red Bull Rampage is usually the home of the longest travel, burliest bikes on the market. However, from Aggy's Evil Wreckoning from 2019 to Paul Basagoitia's Kona Entourage from 2013, there's definitely evidence you don't have to run a full downhill rig to tackle Utah's iconic cliffs. In the event's 20 year history, there's only one rider that has ever ridden mountain biking's most fearsome event with no rear suspension though - Russ Morrell.

Morrell was an American freerider who had always drawn attention for his wild video parts filmed on a Balfa Minuteman. In particular, Morrell worked with Thor Wixom, a filmer who chronicled the early-00s freeride scene through the seminal Double Down trilogy (Down, Double Down and Third Down) and also arguably brought the word 'jib' over from the snowboard world to the mountain bike world as he documented the wild but short-lived urban freeride scene in his 'Jib' film. Jib was notable for being a mountain biking film with no mountains but also for containing one of the greatest crash sections of any mountain bike film to this day.


by krisdaphrk
Views: 14,949    Faves: 181    Comments: 31
Russ' section in Third Down
Morrell's time working with Wixom culminated in the film 'Statement', which was released in spring 2003 and featured the following clip that was claimed to be the biggest ever drop done on a hardtail at the time. The team measured it at 44 feet diagonally with a vertical drop in excess of 30 feet.


It was probably this drop that secured Russ his place as a wildcard at Rampage in October of that year. As expected, he turned up on his trusty Balfa among a field of 29 freeride legends including Gracia, Watson, Kinrade, Spangler, Schley, Simmons, Vanderham and Minnaar. It was the first year that dig crews were allowed on-site and Josh Bender apparently brought 7 members along to work on a huge drop that would become part of freeriding folklore. 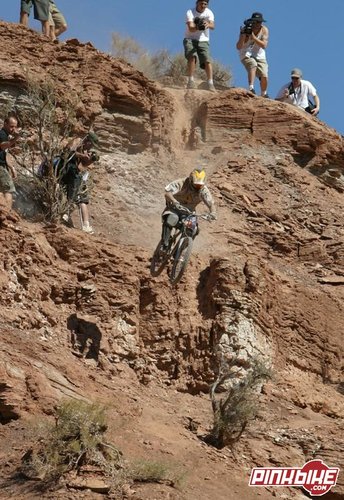 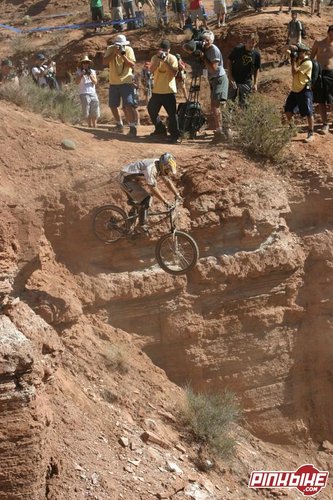 As for Morrell, unfortunately, he took a big crash in his second run and didn't make it through to the finals. Russ Day, our man on the ground at the event in 2003, said, "Going at least as big as the boys on big travel rides, he looked pretty worked after his first line, and unfortunately crashed hard on his second run while pulling a big moto-whip near the top of the course. It was well after the medivac helicopter landed at his side before he regained consciousness. Like Gee, Russ was also seen enjoying the action on Sunday, but looked as though he had been run over by a large truckload of Red Bull." 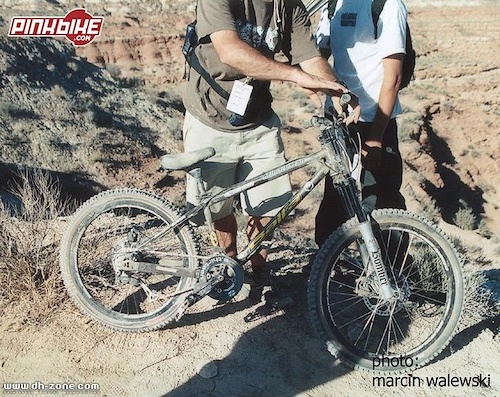 Cedric Gracia took the win at the main event with a run that included a backflip that he only learned to do in training with help from Kyle Strait and freeskiier Seth Morrison. Gracia took home a grand total prize of $3,500 (vs $200,000 in 2019), and finished ahead of Andrew Shandro and Glyn O'Brien on the podium

Morrell seems to have moved on from mountain biking after that crash and we're reaching out to a few contacts to see if we can work out what happened to him next. But one thing that can never be taken away from him is that he was the first rider to ever tackle Utah's wildest event on a hardtail and will probably be the only one to ever do so.

kusa (May 6, 2021 at 13:09)
As a teenager I bought Appalache Real because of Balfa history. I regret buying it. Jokes aside, when it worked it was badass. Unfortunately it did not work for that long.

phastlikedatnascar (May 6, 2021 at 13:10)
This man convinced me that hucking hardtails to flat was cool as shit. Totally in his own league for the times.

chamoisbutt (May 6, 2021 at 15:17)
There were less Karens around back then, urban freeride was much more achievable.

TheLoamDeranger (May 6, 2021 at 12:20)
Cool, I just learned that Cedric Gracia isn't Spanish and his name isn't Cedric Garcia like I've been thinking for the last twenty years.

scott-townes (May 6, 2021 at 18:19) (Below Threshold)
Saying Cedric Gracia is Spanish is like saying Greg Minnaar is Spanish.


How do you confuse that?

scott-townes (May 7, 2021 at 3:18) (Below Threshold)
@PHeller: So you guys have never heard him speak? Or seen him race? Or heard his nickname, "The Flying Frenchman"?

jptothetree (May 7, 2021 at 4:19)
There was an old Rampage edit on Youtube from like 2004 that I used to watch and it literally had his last name spelled out as GARCIA. For a few years I thought that was his name LOL

TheLoamDeranger (May 7, 2021 at 8:14)
@scott-townes: sorry I'm not a mountain bike culture fanatic who knows all the nicknames and stats for every pro rider. I just like riding bikes and occasionally watching biking videos. Maybe I'll live up to your lofty expectations one of these days, although as I get older I care less and less so I'm afraid I'll continue to be an embarrassment.

TheLoamDeranger (May 7, 2021 at 9:08)
@Bushmaster123: Nothing wrong with that as we've all got varying interests, it only became a problem when he started staring down his long nose at us plebes.

scott-townes (May 8, 2021 at 4:04)
@TheLoamDeranger: I prefer the term "gaper" for those who don't know the nationality of one of the most well known DH/freeriders in MTBing. Its OK to admit you're new to the sport, you don't have to pretend buddy.

TheLoamDeranger (May 8, 2021 at 4:24)
@scott-townes: sorry, been riding since the late 90s. I'm just not some drooling fanboy who gives a crap about professional riders.

Are these your twiggy little legs??? Lmao I'm thinking you're the one who's new to this. Do you even ride bro?!

Bushmaster123 (May 8, 2021 at 7:00)
@scott-townes: Hey dumbass, do you even know what the term gaper means. Its not even a mtb term shithead. Now shut your pie hole and leave it alone little man...

TheLoamDeranger (May 8, 2021 at 8:18)
@scott-townes: I like mountain biking and the technology, and I ride as much as I can. I just don't care about or follow pro riders, as I've already said. The only reason I opened this article was to see the guy riding rampage on a hardtail... can't even remember his name lol.

TheLoamDeranger (May 9, 2021 at 13:11)
@scott-townes: That doesn't even make sense haha I'm looking at a profile belonging to some doof who's harassing me over nothing, so it logically follows that I keep up with pro mountain bikers? Come on dude, what's going on in your life that you're this way? Is it boredom, relationship issues, insecurities, a substance abuse problem, or what? Get help!

Ianjmalcolm (May 6, 2021 at 12:55)
Love the guy doing some quick trailside pythagorean theorem!

BenLow2019 (May 7, 2021 at 9:21)
He guess-timated the angle so the height could be way off. I still really dig that he's pulling out the pen and paper though. I wonder if anybody went back and did it properly?

Corinthian (May 6, 2021 at 17:32)
For sure; I seem to recall there was a section in one of the Down videos where he mentions something about saving up for (Medical? Dental?) School...

vesania (May 6, 2021 at 14:21)
This is excellent! More please. I was spectating at that rampage. When he crashed, he was unconscious for a while I believe which made everyone pretty worried. I also remember that someone said he bit part of his tongue off during the crash, but later turned out to just be his mouth guard. By the way, Thor Wixom needs to upload the full length of Statement. Vic Marlow's riding in that one is so awesome.

azdog (May 6, 2021 at 15:09)
I was there that day sitting next to his family when he crashed, definitely some tense moments! On Sunday I had a chance to give Super T a lift to the venue after picking up some beers in Springdale. Those were the days and I definitely treasure those memories of just driving up and seeing the best in the world.

ninjatarian (May 6, 2021 at 12:23)
I started listening to Millencolin because of that segment back in the day. More throwbacks please!

Peally (May 6, 2021 at 12:17)
That was a painful crash vid to watch. Impressive how many times parts completely disintegrated.

bdub5696 (May 6, 2021 at 12:25)
My take always from the crash video were they wore a lot more padding, and the parts broke a lot more frequently. I guessing there is a direct correlation.

joedaho (May 6, 2021 at 15:49)
@freeinpg: preach! I regularly articulate how amazed I am at how good bikes are now and how shit (relatively speaking) they were back then.

ADGproductions (May 6, 2021 at 13:25)
Yes! I was so pumped to see that when I was a high school kid with a Junior T on my Specialized P2. Rock on guys #hardtailpride

Lloydmeister (May 7, 2021 at 2:24)
I remember hardtailpride.com. I wound up with 4ft long sticker which plastered across the back of my parents van. I was core back then brah. Now I'm just like ohhh trail bike with 130mm

mgrantorser (May 6, 2021 at 17:28)
Hah, pretty sure I’ve hit a bunch of those stair cases. Part of me misses my torrent warts and all. Because a hard tail absolutely needs a 150mm ta and 83mm bb to match its 67hta. Reminds me of the time I broke a bike rack with my face after over jumping a 15set… I sure don’t miss waiting for head CTs.

DHFX (May 6, 2021 at 19:53)
The era of progression. These were the days when traditional mountain bikers (and the magazines) couldn't wrap their head around what we were doing back then but look where it has brought us today. I got to meet Thor and Von Williams at the 2003 bike battle and at the time it was like meeting your favorite athlete or celebrity since I had watched all these videos growing up. Awesome article, thanks!

Go-Ride-dot-com (May 11, 2021 at 18:47)
I missed this post last week. As crazy as Russ was on a hardtail at Rampage he was equally intelligent. He went on to become a Dentist or Dental Surgeon and was practicing back east. Not sure if he has a Yeti these days, but he did buy a Turner from Go-Ride.com after he graduated. He was and still is a genuinely nice guy.

ccrida-pnw (May 6, 2021 at 13:37)
That 3rd down segment makes me realize I must have that movie somewhere, will have to dig it out and give it another watch, the lines still look epic, especially on the old rigs...

luckymixes (May 6, 2021 at 14:27)
good thing he wore his safety bandana, those stunts looked pretty dangerous!

SomeGuy3 (May 6, 2021 at 18:42)
@nickmalysh: LOVE the hookworms on this build. Run them at high pressure and the roll, the grip and the cornering are great. Owned this frame since new, craziest build on it ever. The faster i am moving, the more I appreciate this frame. tracks like a pro.

nickmalysh (May 6, 2021 at 17:33)
Pink bike is on the roll, that is quality content out there, cheers @jamessmurthwaite for that!

freeriderayward (May 7, 2021 at 20:24)
Hardtails for the win!! What a legend! I hope he learns how many sweet hucks he inspired many others to do.

emptybe-er (May 6, 2021 at 19:48)
I remember this. Just as 95% of rational thinkers predicted, he exploded. Turns out he wasn’t so special, those shock thingies come in handy for everyone at rampage.

DoubleCrownAddict (May 7, 2021 at 10:28)
Greatest hardtail legend ever. That crash segment, brutal!