The saying goes, "winning one World Cup is hard, winning your second is even harder." The One Win Club currently includes Alex Fayolle, Brook MacDonald, Laurie Greenland, Martin Maes, Loris Vergier, Remi Thirion and, last but not least, Sam Blenkinsop. To celebrate the iXS #NotaRace Test Session in Shaldming, we're going to throw it back to 2008 and Blenki taking that win on a legendary track.

The video above is the Freecaster coverage of the last 8 men on track as the race ramps up to its finale with Rob Warner and Stickman on the commentary. Blenkinsop was just 19 years old at the time and was racing on a stacked Yeti team with Aaron Gwin and Justin Leov. Gwin was racing his third World Cup and finished 8th, Leov just pipped him in sixth but it was Blenkinsop who delivered the first World Cup downhill win in years for the American brand (skip to 17:54 if you just want to watch that). 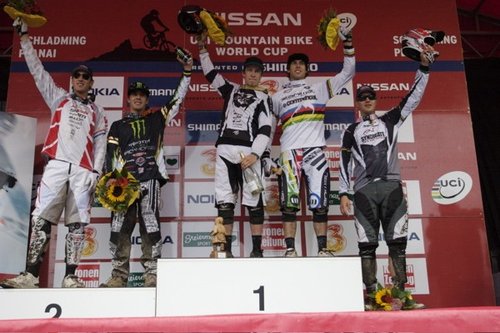 Schladming was traditionally Sam Hill's backyard and he had won by more than 5 seconds every year for the past three years. In 2008 though, he was locked in a battle for the overall with Greg Minnaar and only 116 points separated them giong into the race. Minnaar remembers, "All week there was obviously a lot of pressure on from being so close to winning the overall. It’s not because of the race, as such, but because you are so close to winning it that you don’t want to loose it. Sam and I both had a lot of pressure on both of us and I think it affected both our riding."

Maybe feeling that pressure, Sam wasn't able to keep up his Schladming streak. This was to be his last race in his legendary partnership with Iron Horse and he couldn't crown it off with another win. He was still pushing on the ragged edge though and check out his save at 11:50 to see all the evdience you'll need of that.

Blenki took full advantage and delivered on his first place qualifier with a consumate victory, 1.64 seconds clear of Hill and earning him his first World Cup win, and the first World Cup win for New Zealand. His gloveless, inimitable style is still recognisable even in 240p and you couldn't mistake him for anyone else as he pings between the grassy turns on Schladming's ski pistes.

Sam Hill slotted in just behind him in second despite the mistakes but it wasn't enough to claim the overall. Minnaar rounded off the podium in fifth and did enough to head home with the overall by 61 points.

stikmanglaspell (Jul 16, 2020 at 18:45)
Painful to listen to....but, we we're very hammered, even pissing in trash cans in the commentary booth, with the producer air-cussing us out.

blowmyfuse (Jul 17, 2020 at 5:59)
@stikmanglaspell: does not matter what the "production level" as like. Raw, unadulterated, unhindered.

Those Freecaster broadcasts were fantastic to watch & listen to live. Locked into the monitor, listening to the sound of a beer can opening, hearing the booth door open and close, speech patterns changing as the exhaustion and intensity intermingled. Pure and perfect!!!

"frozen. Wait, it skipped straight to the podium".