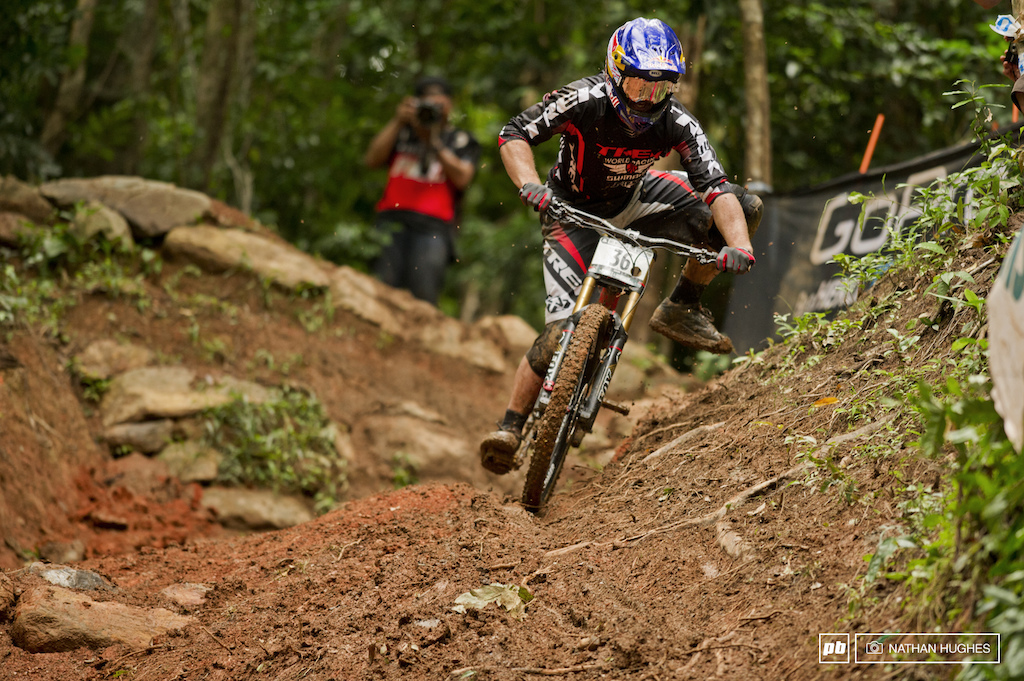 Despite its name, the UCI downhill World Cup series remains a largely European and North American affair. In fact, just 7% of nearly 200 World Cups since 1993 have happened outside of those two continents. Given that 2021 and 2022 will be following the same pattern, we thought it was a good time to highlight the 6 venues that have brought some more international flavor to the circuit.


The last time the World Cup headed out of Europe and North America it was to Cairns in northeastern Australia. Riders first visited Cairns for the World Championships in 1996 but it wasn't until 2014 that a World Cup was held there. The track is packed with features including its fearsome top rock garden, aggressive whoops and tight flat corners but a final lung-busting sprint to the line will stick in the mind of most racers and often left them doubled for breath in the finish corral.

We had two World Cup races there that showcased the extremes of Cairns's weather. In 2014, Gee Atherton battled through peanut butter conditions in a pair of Five Tens borrowed from a spectator to take the win while Loic Bruni picked up his first-ever World Cup win when we returned in 2016. Rachel Atherton proved she was Queen of the Jungle as she took the win in both World Cup races at the venue. We visited Cairns again for the World Championships in 2017 and Miranda Miller and Loic Bruni took the Rainbow Stripes home.


Another venue with a reputation for increased respiration is Pietermaritzburg in South Africa. Greg Minnaar's local track was famed for its middle section that saw racers pedaling between sizable tabletops. It's also the race track that has seen the most experimentation with bike set up in recent years as riders tinkered with short travel bikes, dropper posts and lockouts to help them get the power down in South Africa.

There have been four races here and the men's racing has seen Greg Minnaar and Aaron Gwin share two wins apiece while the British women found a second home here with Tracey Moseley taking two wins and Rachel Atherton and Manon Carpenter splitting the other two.


There has been just the one downhill World Cup at Canberra that served as a warm-up for the World Championships where Steve Peat would finally take the Rainbow Stripes. On a sub 3-minute track that has been described as 'downhill BMX', Tracey Moseley and Greg Minnaar came out the victors.


The only World Cup venue in South America (although rumor has it that it won't be that way for long) was in Balneário Camboriú, Brazil. Set in a coastal resort about 600km south of Sao Paolo, the race quickly picked up a reputation as a party spot for racers.

The track was super-short with the elite men getting from top to bottom in just over 2 minutes. The Brits Tracey Moseley and Rachel Atherton swept the wins in the women's races and it was also a successful venue for the G-Cross Honda Team that picked up wins via Greg Minnaar and Matti Lehikoinen. Balneário Camboriú hasn't hosted a World Cup since 2006 but it played host to three consecutive Master's World Championships in 2010, 2011 and 2012.


Arai in Japan hosted three rounds of the World Cup downhill around the turn of the millennium and, like most races back then, they were dominated by the French pairing of Anne Caroline Chausson and Nico Vouilloz, who came away from the Far East with three wins apiece.

The venue was one of the most well-attended races of the time and it was scheduled to appear in the 2002 season as well, however it was canceled and replaced by none other than Fort William that has remained a staple of the circuit to this day. 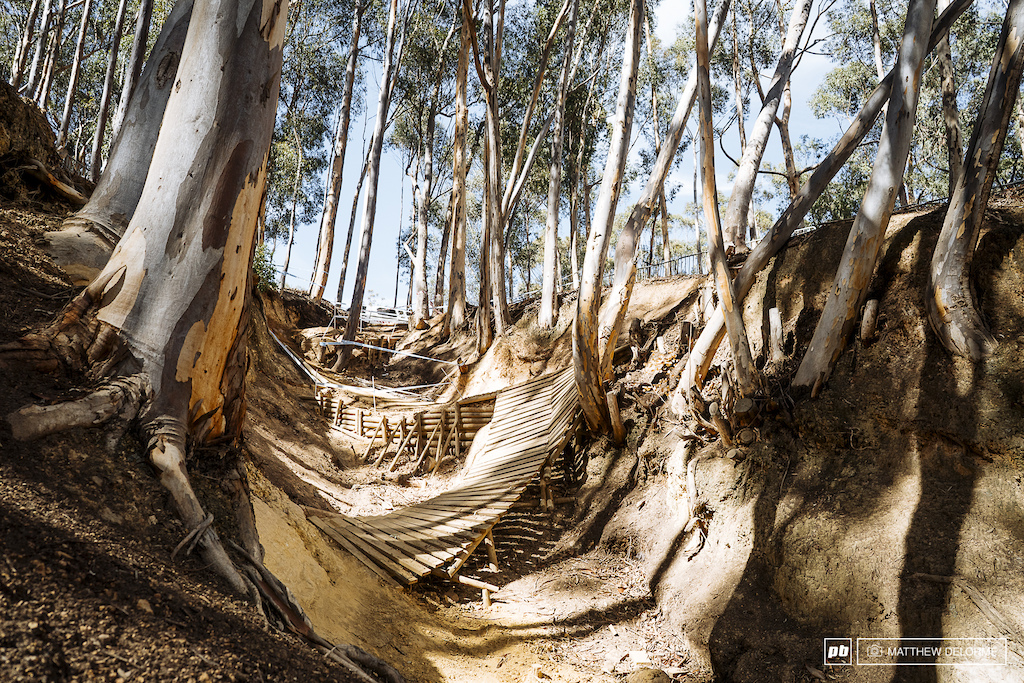 Taken from the 2018 XC World Cup course.
The first World Cup to happen outside of Europe or North America was in Stellenbosch in 1997 and 1998. Details are fairly thin on the ground for this venue although we know the wins went to Bas de Bever and Elke Brutsaert in 1997 and Nico Vouilloz and Anne Caroline Chausson in 1998. The cross country racers returned to the dusty South African venue in 2018.

Fektor (Feb 18, 2021 at 4:07)
I filmed at that 2014 world cup in Cairns. Words cannot describe the apocalypse that was that track in the mud. Hats off to anyone who made it to the bottom let alone winning it. Amazing run for Gee to get that top spot.

Fektor (Feb 18, 2021 at 16:26)
Australia being so far from most teams home base they had limited supply of parts etc sent over and available. Cairns only has a handfull of bike shops, and when it started raining there was a crazy scramble to find mud tires and parts. It wasn't just the mud, the humidity was brutal. People were just throwing their cameras in the bin after a few hours. @melonhead1145:

NickNickNick (Feb 19, 2021 at 0:03)
Cairns held two World Cups before the 96 Worlds, with the XC guys and girls riding up Jacob's Ladder rather than down it. Back in the days when Croc Slide still had some dirt on it and wasn't pure rock!

ajl-mtb (Feb 18, 2021 at 3:50)
I somehow seem to have forgotten how poor quality the average persons home video was, right up until like 2014! Friday Fails would be a terrible watch if we didn't all have 1080p+ video recording on phones and GoPro's these days!

slippynicky (Feb 18, 2021 at 8:40)
I was standing by the guy Gee borrowed shoes from in 2014... in practice he slowed to a stop in front of us, sizes the guy up, and asked what his shoe size was. Gee finished his race run and the dude was like "I gotta go get my shoes back!" and headed down the mountain.... wonder if he ever got them back.

fingerbangextreme (Feb 18, 2021 at 5:38)
Loved the Brazilian round in Earthed vids. Gracia racing in a Brazilian footy shirt and Peaty on a borrowed V10 with a Brazilian flag. And a super rowdy crowd. Samba DH

armcoal (Feb 19, 2021 at 8:40)
This is why DH should be a 10 race series, evenly spaced out. Can still have the classics: MSA, Ft Will, Val di Sol, etc. as well as rotating thru new/other venues each year for variety and to grow the sport. I believe Minnaar suggested this a few years back. Maybe that just makes too much sense for UCI to consider...

Backdoor (Feb 18, 2021 at 9:41)
Was the Arai round held at Lotte Arai near Myoko Kogen?
An Asian round, particularly a Japanese round would be great to see again

taldfind (Feb 18, 2021 at 9:14)
What is it about the UCI that makes hosting a World Cup so unatractive to countries outside of Europe and (barely) North America?

ChazzMichaelMichaels (Feb 18, 2021 at 10:43)
Cost, infrastructure required etc. There are great trails everywhere, but no good if you can't find accommodation for 500 people and provide an uplift.

armcoal (Feb 19, 2021 at 8:46)
@TobiasHandcock: yeah, there's a fee for sure. But, I actually chatted with Neko Mullaly about it a bit at Windrock, he said it's not crazy expensive to do, the constraint is mostly local infrastructure and general interest in the sport.

JPones (Feb 18, 2021 at 11:21)
God Stromlo (Canberra) is the worst, I cant believe they bothered holding a race there! Nothing but a boring, artificial moonscape.

theflyingtiger (Feb 18, 2021 at 17:43)
it was a moonscape because the whole mountain had been obliterated by fires only 5 years earlier, still a shit track tho.

silentbutdeadly (Feb 18, 2021 at 19:22)
Actually, Stromlo and the trail network there is quite awesome. However, there is no way you would consider it having the makings of a World Cup standard DH track... certainly not these days. Even Cairns would be hard to argue for. Anywhere else in Oz would be either too remote, too difficult to access or have environmental or cultural constraints to track development.

NickNickNick (Feb 18, 2021 at 23:59)
Tracey Hannah may have something to say about the summary of winners at Pietermaritzburg...