When building the JBC Bikepark 4X track, Tomas Slavik had one goal in mind, to create a course that would show the world the very best of modern 4X. The discipline had been pulled from the UCI World Cup circuit in 2011 and had been replaced by the far duller XCE format, 4X had something to prove and it easily did when the course made its debut in 2013.

Slavik's creation greeted riders with huge pro line jumps, multi-line tech sections and its now-iconic painted wallride. It remains one of the highlights of the 4X calendar to this day, although it may never have had a greater moment than in its opening year. 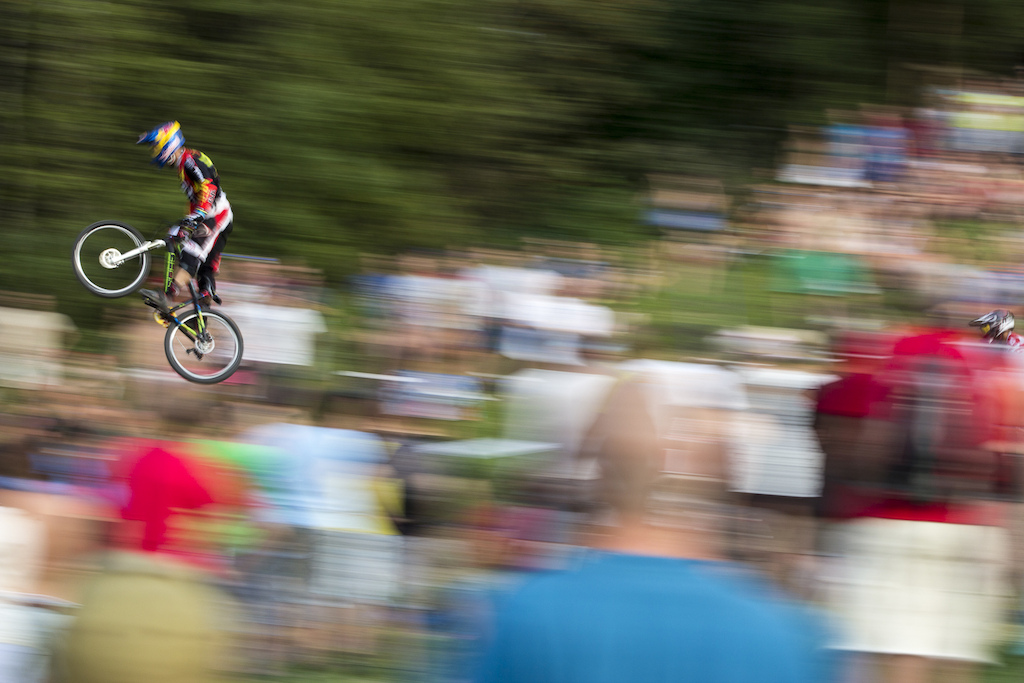 With speeds up to 50 mph in places and jumps of 52 feet, the JBC track remains a rider and fan favourite. Photo: Charles Robertson.
In the 14/16th final, Czech rider Michal Marosi lined up against fellow Czech Jonas Stehlik and Hungarian Tamas Tarr. On paper, it looked like it would be a cakewalk for Marosi who qualified 6 seconds faster than the other two. Marosi got the holeshot and had a lead of five bike lengths coming into the first set of jumps.

He overshot the first one then found himself pushing up the backside of the second as Stehlik and Tarr flew past. When he mounted again he was visibly quicker than the other two riders and had caught up with them again by the base of the wallride. Marosi passed both riders in front of him by going around the top of both of them on the wooden wall. It was committed, calculated, and, above all, absolutely wild. The 7,000 Czech fans went crazy and Marosi brought it home to pass through into the next round.

Watch the full run from the race broadcast, here.
Marosi was knocked out in the quarter-finals and the win went to the course's creator, Tomas Slavik, who was racing with a broken thumb, while Katy Curd took the win in the women's race.

vinay (Nov 12, 2020 at 9:21)
@adrennan: Yep, and a proper roots section too. Because this is what proper head to head racing on mountainbikes should be like.

usmbc-co-uk (Nov 12, 2020 at 9:56)
I could never understand why it got binned off, well I sort of can (resorts / infastructure etc). In terms of accessible mtb racing though its pretty wild. I think it became uncool with the cool kidz and that was that

DC1988 (Nov 12, 2020 at 11:41)
@usmbc-co-uk:
I think it would go perfectly with DH racing. I've enjoyed watching DH live but it's not the best spectator sport as you can only watch a 20 metre section at a time. By having 4d at the same venue it would give the opportunity to get closer to the action and actually see the results as they happen.

sino428 (Nov 12, 2020 at 13:58)
@usmbc-co-uk: I would love to watch this at all the world cups but I'd have to guess that it was just a large undertaking for the host venues to build these courses. With most of the WC venues also being winter ski resorts it would seem these types of tracks would have to be knocks down and rebuilt each years (much like the Joyride course at Whistler)

Here come the down votes because I'm pro-America

jayacheess (Nov 12, 2020 at 16:05)
@willdavidson9595: You're pro fascism. There has never been such an un-American president in the history of the country. Dude is literally trying to dismantle your democracy. He'll fail.

Ryanrobinson1984 (Nov 12, 2020 at 17:24)
@jayacheess: I think Fascist is getting a little hasty. I don’t think Trump would even understand that term or concept, to be honest. He is just completely rudderless morally and ethically and it seems to unintentionally, but directly, align with a fascist checklist. He just has no value system other than his own personal, short sighted gain. He’s not a fascist but if you ever tried to walk through Trumps deepest thoughts, you wouldn’t get your ankles wet.

jayacheess (Nov 12, 2020 at 17:40)
@Ryanrobinson1984: The thing is, I don't think fascism is something you consciously pursue. It's simply the natural conclusion reached when narcissistic populists are given enough breathing room.

withdignityifnotalacrity (Nov 12, 2020 at 18:47)
@willdavidson9595: Imagine thinking that Canadians are looking at what's happening south of their border with anything approaching jealousy.

Counsel (Nov 13, 2020 at 3:10)
@Ryanrobinson1984: should I assume the moisture on my ankles is urine? If men think about sex 19 times a day, and one of his publicized fetishes is golden showers, you may wanna bring the highwaters when strolling through his thoughts.

Ryanrobinson1984 (Nov 12, 2020 at 12:19)
In all honesty, it looked like he messed up the other two’s rhythm, completely, lol. You could see that they obviously slammed on brakes trying to avoid him after he pulled that stunt.

Clem-mk (Nov 12, 2020 at 13:00)
@Ryanrobinson1984: nope they're a lot slower before this and the inside guy went foot out hard on brake to not hit the wide guy who look just conservative, the à mtb legend flew over them!

HellmanD (Nov 12, 2020 at 3:53)
Such a classic moment in MTB race history, I remember being blown away by this when I saw it the first time

big-red (Nov 12, 2020 at 6:00)
I was just thinking about this exact moment the other day and where it would rank in the top moments in bike racing history, including all disciplines. It's gotta be top 10.

That is my all time favorite video on pinkbike!

nojzilla (Nov 12, 2020 at 9:24)
One of the greatest moments in cycling history.
THE greatest overtake in ANY form of racing and/or motor sport.
Change my mind meme

Dropthedebt (Nov 12, 2020 at 10:18)
Hey.. I saw this race, last week I think it was... It was 2 old guys riding on really, really outdated machinery. You know the type... All the cogs are seized up and the machines just never move forward..
Anyway, this race normally only takes 24 hours to complete but this time, because the 2 guys in the race were really, really old... And the machinery they were on was so... So... outdated and decrepit, the race is still not over.
It was/is crazy... One old guy was way in the lead and then during the dark hours the other old guy went Zooming past and took the lead and said he won.
Well, it went to a photo finish in the end but it turns out the picture was taken on a HUAWEI phone made in Chi-Nah so it can't be trusted. Should have used a good old American camera... Like a Zorki or a Zenit. The we would have known the result.
Race of the year....

papapendrel (Nov 12, 2020 at 9:46)
EC's win at WC 04 (I think) ranks far higher. It was a final, not the 14/16s, it was world champs, and the strategy that went into it, saving his pass line until the last race, puts it on top.
In this case Marosi was the best in the world at the time and the guy in the gate next to him was wobbling like he was in his first gated race.

fingerbangextreme (Nov 13, 2020 at 8:06)
Marosi is such a badass and immortal MTB legend for that boss move. He was coming in hot to that wallride. Czechs had a real 4x pedigree what with that packed event and Prokop. Is it cos they had a vibrant BMX scene?

I've never seen a 4x track with a little bit of woody single-track before. I like it

But seriously how does he sit down with balls that big? etc

vinay (Nov 12, 2020 at 9:27)
I recall I mentioned it before the final WC DH race (because of a wall along that track that could be ridden). Would that have been the inspiration? If so, I'll mention it more often. Can't have enough of this so wouldn't mind it being put up

vinay (Nov 12, 2020 at 23:36)
@Joebohobo: Yeah, could very well be. I think @transitter was referring to my comment here: www.pinkbike.com/u/jamessmurthwaite/blog/video-rob-warner-analyses-the-lousa-world-cup-track-as-riders-put-rubber-to-dirt.html which was indeed about two weeks ago. Either way, this was a classic in mountainbike racing and should never be forgotten.