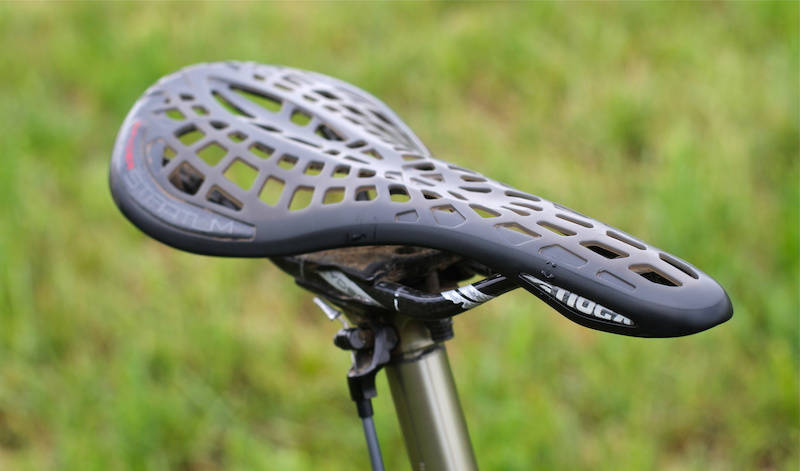 At just 120 grams and lacking any foam padding, the Spyder Stratum requires an open mind.

The unpadded 120 gram Spyder Stratum saddle is bound to attract attention, but Tioga explained to us how that isn't the goal of the unique looking and flexible webbed design.''The Spyder aims to address a major deficiency present in most mainstream padded saddle construction: shock absorption and, more specifically, its rate and frequency of absorbing energy from bumps'' says Tioga's Kai Cheng. ''We found that padding on saddles is an inefficient shock absorber because their level of absorption is proportional to its mass - more absorption requires thicker and heavier padding. As most performance saddles utilize padding of well under than 15mm thick, and then factoring in the padding compression once you sit on it, there’s not much shock absorbing value left to take on the hits.'' Rather than foam that tends to compress and then not do much else, the Spyder's dual-material webbed shell is said to be able to conform to a rider's behind while also staying pliable and active regardless of how much weight is on it. You're correct if you're thinking that you've seen something similar in the past - Tioga has offered a road-specific model with a shell built from a single material for a few years now, but that design proved to not be durable enough for off-road use. In contrast, the Spyder Stratum is manufactured using two different materials: a stiffer base material with a softer and more flexible cover bonded over top. Tioga's 'DualTech' two-piece construction took a few years for them to figure out, and they actually tested a large number of different versions that offered more and less flexibility before finding a happy medium that they feel works well across the board and is durable enough for all around use on a mountain bike: ''The SpyderWeb cover’s compression is managed by unique underside structural braces connected to its frame to enable the saddle to remain lively when seated but not overtly sag or bottom out while pedalling or taking on bigger hits, Cheng clarified when we asked why one would want a less flexible shell design. Want to see how the flexible shell works? Check out the video that Tioga put together that shows just how much the Spyder's shell flexes under a rider. 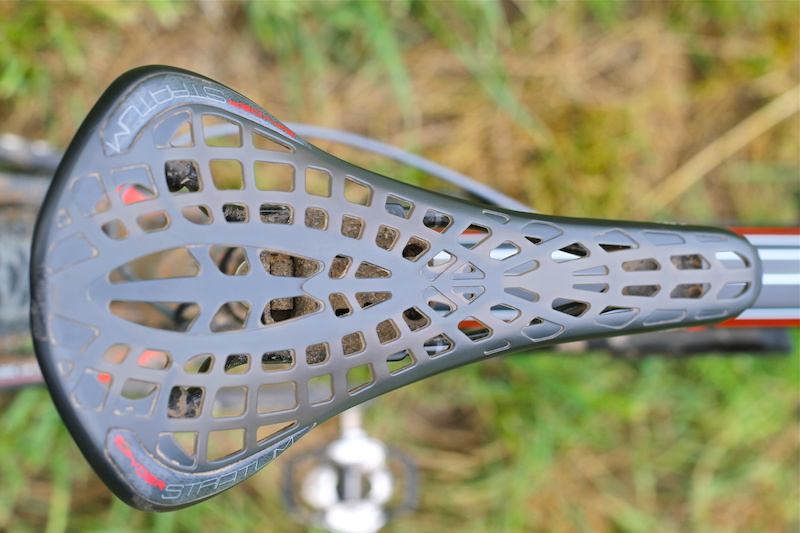 The Spyder Stratum's shell has been designed to flex a certain way, with not too little and not too much give.

The Spyder Stratum has passed all EN testing, and while the 190 gram chromoly-railed model that retails for $125 USD doesn't carry any sort of rider weight limit, Tioga does say that the flex of the webbed shell is best suited to riders weighing between 150 and 180lb - a lighter rider may find it a bit harsh, while a heavier one could sag too deep. The same weight recommendation applies to the $190 USD carbon railed version that's reviewed below, as well as a 240lb rider weight limit that doesn't seem out of line given the seat's feathery 120 gram weight. www.tiogausa.com

The darker material is the stiffer base, while the lighter coloured section is the softer and more forgiving shell.

choppertank3e (Aug 22, 2014 at 0:53)
Saw one of these a few weeks back thinking it was the road version on a pretty tricked out Scott trail bike. The rider looked like a dirt roadie and had bar ends on riser bars so I thought he was just an idiot for running this seat. Maybe I was wrong.

MrNottingham (Aug 23, 2014 at 3:36)
doesnt the solution or at lest stepping stone seem stupidly obvious, combine the 15mm of padding normally used with the web design thus removing any uncomfort but still making a saving on the weight over a conventional seat?

I've been looking for something similar ever since. The Tioga Spyder Stratum is it. I'll be getting one.

mikelevy Mod (Aug 21, 2014 at 22:06)
I wouldn't think twice about rocking the chromoly rail version. We actually have one of those as well under a 220lb-ish rider and he's managed to bend the rails a touch, just in full disclosure. Both versions are among the most comfortable seats I've ever used, so I'm hoping to get on another regardless.

groghunter (Aug 22, 2014 at 7:37)
I wonder if has to do with the ends of the rails flexing more, since this doesn't have a traditional shell to act as one of the legs of the polygon. (I case I'm unclear: the rail essentially is three sides of a rectangle, with the seat being the forth, if the seat is flexing you've got a less structurally sound rectangle.)

chezotron (Aug 22, 2014 at 10:19)
Maybe they just need to do some slight redesigns to modify the pressure points so it's distributing the pressure on a more even scale rather than at a critical point. Maybe that's why it cracked?

Someoldfart (Aug 22, 2014 at 8:51)
About forty years ago I made a similar saddle from a Cinelli road saddle that had only a leather cover and no padding. The cover got torn or something and I pealed it off. Cut away the sides and drilled holes through the top to make it flex more easily. I probably weighed 130 pounds then. I thought it worked well back then under my hard 16 year old arse. But that was road riding. I like the lack of a leather or pleather cover as I wear through those pretty fast. I'll try one if I see one.

nimmo (Aug 21, 2014 at 21:55)
The BMX race version came on a complete I bought and has been by far the most comfortable BMX race seat to just sit on I've ever had. I wouldn't hesitate to purchase the coming spyder Outland.

kraem (Aug 22, 2014 at 2:03)
been riding my saddle without any foam for about 2 years now .. just without that spiderstuff, its nothing new for me.. just peel off your foam and you're fine

phobospwns (Aug 22, 2014 at 4:43)
I had the original version and I absolutely loved it. It was light as hell, and very comfy. Unfortunately, it didn't last very long... it shattered when I mucked up dropping off a teeter totter (because I thought it was a solid bridge drop... awkward!). Luckily I didn't actually fall... might have made myself a little more aerodynamic.

I'd give this new, more durable version a try, for sure.

studers (Aug 22, 2014 at 16:22)
over took a rider at the mega running one of these seats, it literally broke off the rails and flew past me, was fucking hilarious, the rider had to ride the rest of the course on his rails!

NickBit (Aug 23, 2014 at 4:16)
I'm not saying it's a bad idea. But I already have enough trouble explaining my uncomfortable, overpriced mountain bike to my workmates. What would they say if they saw this!!!

CaptureTheRide (Aug 24, 2014 at 5:21)
I owned one these for about a month and experienced the exact same scenario. The edges of the seat are sharp and unforgiving to the in side of your thighs. I broke one of the carbon rails just by lowering my dropper post while riding. It's a piece, don't waist your money

I have all the padding I need in my chamois. I have 2 with chromemoly rails for MTB and one with carbon rails on my road bike.
In our wet Pacific NW This saddle stands up to the environment better than other saddles I have tried. These are expensive but worth it in the long run if you ride a lot. I also find the smooth water prof surface easy to slide my weight forward and aft on compared to leather saddles that feel sticky sliding on the surface. Especially in our wet riding area

superdoperider (Aug 21, 2014 at 21:37)
Wouldn't this seat enable a mud/dirt enema on wet trails and roads? Where as conventional seat blocks the dirt spray when your seated.

morgman (Aug 22, 2014 at 0:04)
When you're standing, a lot of mud hits your ass, and ends up on top of the seat. There's a chance this saddle would actually shed mud better than average, as not only can dirt go through from the bottom, but the top. I suspect it's a non-issue.

rickyretardo (Aug 21, 2014 at 21:43)
I use a Tioga Spyder saddle and have used the 4x saddle in the past. I like em, and have had no problems with them breaking. Although I'm not sure about the carbon rails, they're already light enough with the alloy rails.

ThePriory1978 (Aug 22, 2014 at 3:17)
Love the look of the saddle but might need a custom made Mucky Nutz style crotch protector to protect from damp scranus syndrome. Easy to make one out of a plastic stationary folder.

josh-roche (Aug 22, 2014 at 4:13)
If you were to put one of these and a dh bike I would recommend using a different saddle if you were going for william and using the gondolas. ..I defo wouldn't trust this saddle to hold my bike up in the air

TGrebe (Aug 21, 2014 at 21:36)
It looks pretty cool, but I'll stick with standard padding and a much lower price tag. If I were racing cross country I might try it out!

groghunter (Aug 22, 2014 at 7:46)
You got me all excited @mikelevy, been looking for some liners to try... castelli doesn't seem to make any though, just full shorts, & full shorts under baggies is no fun in the desert. Any good liner recommends?

morgman (Aug 22, 2014 at 10:06)
@groghunter plenty of good options out there but not cheap. Check out Giro New Road or Dirtbaggies bibs (both have high quality pads and you can take a piss out of them), or if you want a chamois without bibs, high end road stuff like Sugoi RS-E or Specialized RBX. It's pretty much accepted that anything that comes as a liner with a mountain bike short is not going to cut it for long days pedalling, unfortunately including the SWAT bib.

That said, I'm not doing XC length days in the saddle, I just need something good enough for regular MTB. I just can't seem to find anything as good as my old (as in about 12 years) Fox shorts.

faul (Aug 22, 2014 at 5:46)
I have a D-spider pivotal. I think it's the only rock hard (but bombroof) saddle in their lineup. Great if you only stand up on your bike. Really light, strong and cheap.

chasejj (Aug 22, 2014 at 11:08)
Mike- The issue I see with this saddle is the ridiculous weight limit. Fine for a chunk of riders w/I the limits but those on the fringes are totally left out. Seems like the niche is getting narrower.

chasejj (Aug 22, 2014 at 14:26)
Call me old fashioned but I still buy and ride old NOS WTB Team SST saddles and have never found anything more comfortable.

iluvdimsum (Aug 21, 2014 at 22:01)
The saddle is actually not bad. It does rip thru pants like nothing if you don't have reinforced dh shorts.

mikelevy Mod (Aug 21, 2014 at 22:07)
Hhhhhmm, not in my case. I usually wear barely-there XC baggies and their bums all look good as new. That said, I rotate between three or four different pairs so the wear is spread out.

morrisgabriel (Aug 21, 2014 at 21:14)
I love sdaaleefhowefhowuerhorug
Below threshold threads are hidden

chasejj (Aug 22, 2014 at 8:01)
On first glance this thing has so many serious flaws it should have never left the brainstorming session. A fool and their money are soon parted, never sounded so true.