Tom Pidcock has posted a video of himself riding out of the saddle just six days after breaking his collar bone into five pieces in a vehicle collision. 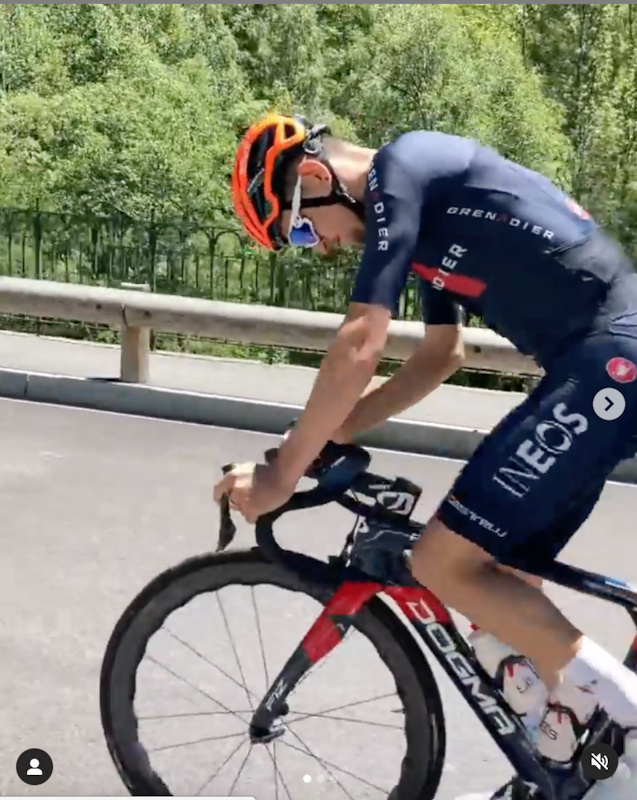 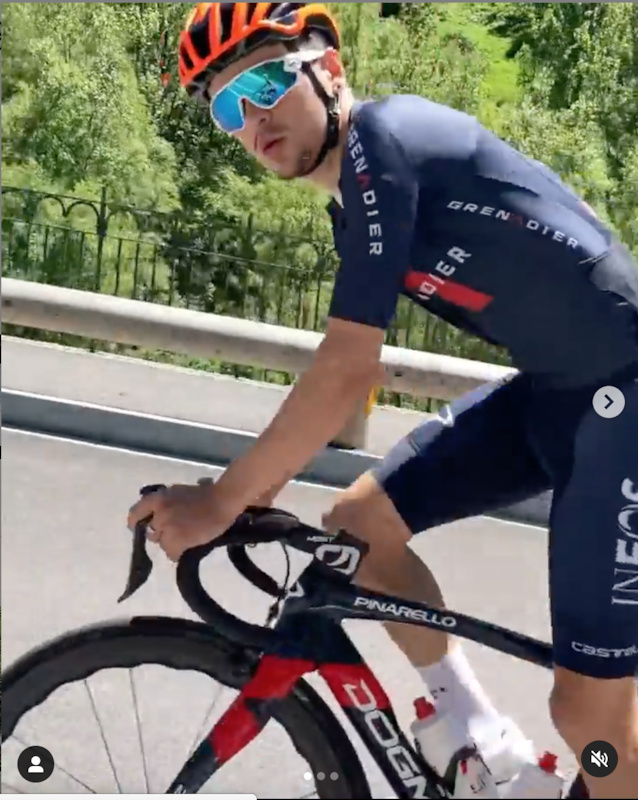 This is a truly superhuman recovery and adds credence to the claim made by his coach, Kurt Bogaerts, that he will be back racing by Les Gets on July 4th ahead of the Olympic Games race on July 26. Pidcock was not scheduled to race the XC Cup in Leogang this weekend but he did have to miss the Tour de Suisse road race because of the incident.

It has also now been confirmed that Pidcock sustained the injury following a collision with a car that left his bike snapped in two. A picture was posted by the La Flamme Rouge Twitter account below: 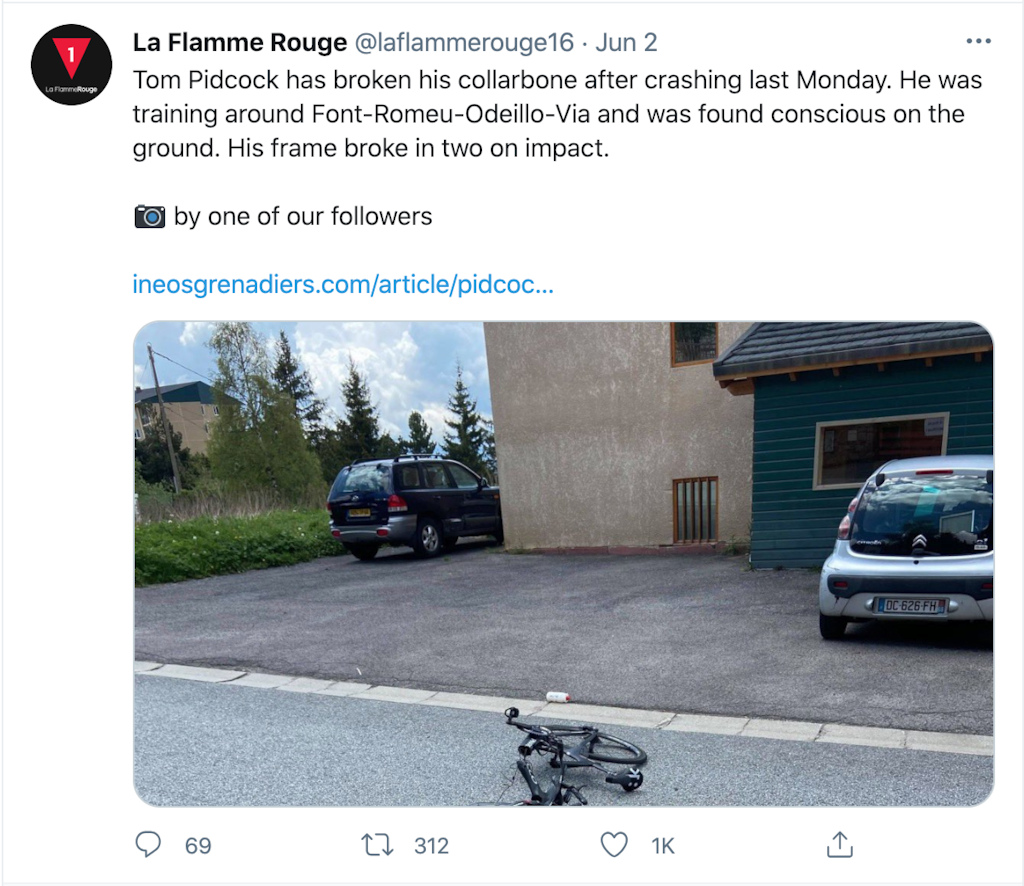 We wish Tom the best in his ongoing recovery and hope to see him back to full fitness by Les Gets. 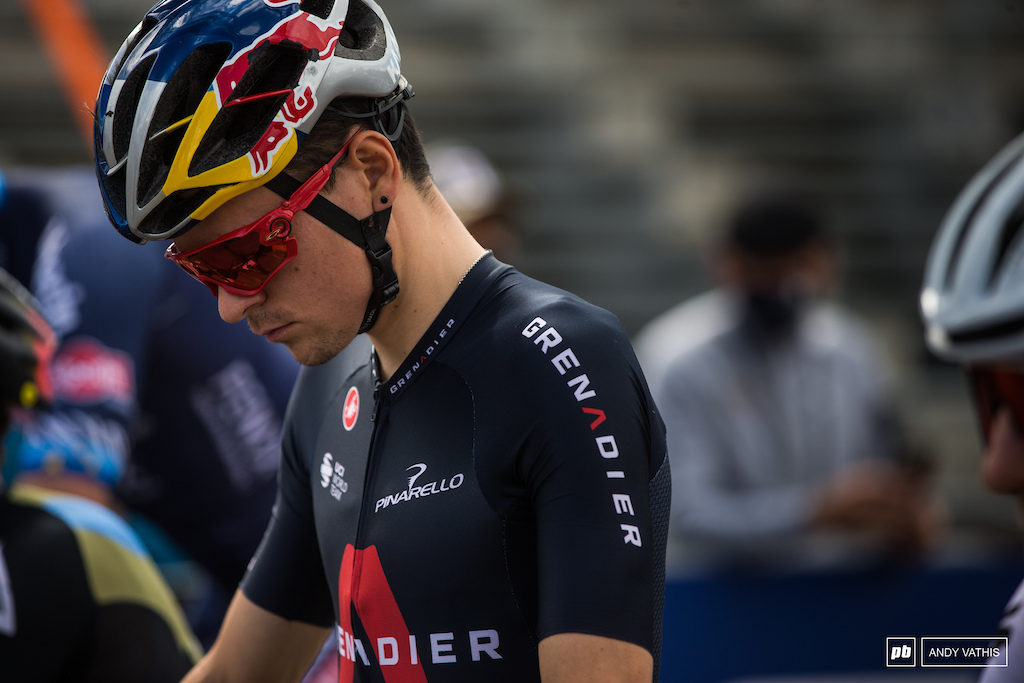 Tom Pidcock has broken his collar bone in a training crash.

An Ineos Grenadiers press release confirms that he underwent surgery at a hospital in Girona this morning and is currently recovering from the incident.

Pidcock made an incredibly strong start to the XC racing season by battling through the field in Albstadt then picking up his first elite win in Nove Mesto. He is also likely to take Great Britain’s elite male Olympic spot and will be one of the favourites to secure a medal in Tokyo.

Coach Kurt Bogaerts said: “Tom is doing well and is already looking ahead and focussed on his rehabilitation. While this means he won’t be able to start at the Tour de Suisse this week as planned, he will get back to training as soon as possible and prepare for the rest of the season.”

Pidcock was scheduled to race the Tour de Suisse road race then the Les Gets World Cup in preparation for the Games. We have reached out to Tom to see how this will affect his Olympic preparation and will update this article with more information as we get it.

juanny (Jun 2, 2021 at 11:55)
Tyler Hamilton managed to ride the TdF with a broken collar bone from a stage 1 crash (and win a stage).. doping questions aside, seems roadies are a pretty tough bunch.

eblackwell (Jun 2, 2021 at 12:00)
No kidding. I think the popular perception of road cyclists is that they are softies who shave their legs, which is pretty silly considering their sport comes down (in large part) to who can endure the most pain for the longest.

Narro2 (Jun 2, 2021 at 12:26)
@eblackwell: yeah, most bullying from gravity guys towards lycra riders is for the most part a projection of insecurities. It is fun and all, but with time it gets boring.

Bennyrs (Jun 2, 2021 at 12:51)
Geraint Thomas also finished a TdF with a broken pelvis, some of them are seriously hardcore.

hatton (Jun 2, 2021 at 13:05)
Agreed - professional road racers are amongst the toughest and craziest athletes on the planet (not to be confused with the local mamils you see around town). Lawson Craddock finished the tour a few years ago with a broken shoulder blade and it feels like theres a story every year out of the tours that match or exceed the NHL. The balls these guys have to rally down wet mountain descents on 25mm tires doing 70mph or to do a bunch sprint at 45mph while taking elbows from another rider is just insane.

dthomp325 (Jun 2, 2021 at 13:16)
There’s a big difference between a small crack and a bone broken into multiple pieces even though they are both referred to as “broken”.

Sambikes11 (Jun 2, 2021 at 14:13)
I’m pretty sure Tyler Hamilton had to have dental work after that tdf as he’d ground down several of his teeth gurning through the pain.

juanny (Jun 2, 2021 at 15:07)
@Sambikes11: That was the story I remember but seems he had 11 teeth capped after crashing at the start of the 2002 Giro d'Italia where he fractured his humerous at the start and finished 2nd overall . 11 teeth capped through 3 weeks of grinding then more dental the following year with his TdF collar bone teeth grinding.
Maybe that was where Dentist bikes started!

mrkkbb (Jun 2, 2021 at 15:40)
Not to take anything away from Tyler, but I doubt he or anyone would be able to ride a mountain bike on an XCO course with a broken collarbone.

gordonshred (Jun 2, 2021 at 17:16)
@PNdubRider: Talk about overcoming adversity! Anything is possible!

Planetx888 (Jun 3, 2021 at 5:46)
@eblackwell: I think the only group that gives them an honest run for their money are Nordic skiers, just completely savage.
Thats coming from a "never roadie" and reformed alpine racer.

hunkyG (Jun 3, 2021 at 17:35)
@hatton: They've done lots of clinical studies on which athletes can endure the most pain, and professional road cyclists win in almost every one. Mountain bikers are tough too, but you can't argue against something like TdF with 20 or so days of 4 hours of extreme pain management. You can make fun of lycra riders all you want, but you can't argue against their insane aversions to pain.

Ya, your typical local roadie has as much in common with pro road racers as your local dudebro jerk has with pro DH riders.

ReformedRoadie (Jun 9, 2021 at 9:35)
@PNdubRider: Officially, the Uniballer has won nothing...
How about LeMond coming back from getting shot in a hunting accident, with buckshot still in his body and winning the Tour twice? Before EPO was a thing.

GorgeousBeauGaston (Jun 9, 2021 at 9:38)
Chris Froome won 4 TDFs while at 0% fat and 0% muscle mass, consisting of only bones, skin, and a gallon of research chemicals, despite science suggesting a human could not possibly exist in this state

RadBartTaylor (Jun 9, 2021 at 9:39)
@dthomp325: yeah, this.....a hairline fracture is just as clinically "BROKEN" as a highly displaced compound fracture.....one is rideable, the other not even close no matter how tough you are...obviously many breaks are in-between these two extremes.

ReformedRoadie (Jun 9, 2021 at 9:39)
@hatton: you forgot the part about the exposure in the mountains and how until recently it was on rim brakes...
Alot of those roads have no guard rails. The cost of failure is pretty high.

hamncheez (Jun 9, 2021 at 10:20)
Also, it takes a really strong, rugged, durable body to not have an effing heart attack with that level of PEDs coursing through your veins.

TrailFeatures (Jun 9, 2021 at 17:34)
@Narro2: It's been boring for a while now. These days when people give lycra a hard time it's more to be homophobic under the guise of "Just joking around, Bro.".

Naw, Man. I see that dog whistle they're blowing. I'm done with it.

Augustus-G (Jun 2, 2021 at 12:35)
@mwglow: No kidding. That doesn't look like a fall down go boom crash, more like a collision with a car or a large stationary object.

onawalk (Jun 2, 2021 at 14:25)
That’s a spectacular amount of wreckage, and the description is very vague.
They found him unconscious, on the ground, beside a mangled bike!

Curculio (Jun 2, 2021 at 14:29)
The collar bone will only take 4 to 6 weeks to fully heal, unfortunately replacing the bike will take much longer and may be out for the season.

HairyLegs (Jun 2, 2021 at 15:08)
Rob Warner must be lying in the fetal position in his shower with all his clothes on and cold water running whilst crying uncontrollably with Pidcock being out of the running currently! Bad Jokes aside, heal well and heal strong Pidcock!

not-really (Jun 2, 2021 at 12:02)
This specially hits hard the Fantasy League players, they no longer have a surefire podium rider for under $400k right?

Augustus-G (Jun 2, 2021 at 23:59)
@Jango997: I thought Pidcock was planning to and MVP was not going to ride Leogang.
I need to recheck some interviews tomorrow.

Thanks for the heads-up.

adamszymkowicz (Jun 2, 2021 at 11:52)
Did he get hit by a car? it looks like his front wheel is destroyed, indicating it either got run over, or he absolutely smashed something head on.

Cleveruplink (Jun 9, 2021 at 10:06)
I broke both of my collarbones in the last 5 years. The first one on a car (their fault), the second on a tree (my fault). Both fixed with metalwork. I recognize that I'm not an orthopedic surgeon and that Tom is younger than me and paid to ride a bike but I still think this is a little early to be loading the bone or the metalwork. Doing press-ups on it is definitely too soon! Fingers crossed the healing goes well though and I'll be cheering for him in Les Gets and Tokyo.

owl-X (Jun 2, 2021 at 12:34)
that bike looks like it was run over... You'd think the British fans would've realized every time they gas up any promising sportsmans they've pretty much doomed it

DylanH93 (Jun 2, 2021 at 13:30)
Damn that sucks to hear. I haven't been into xc racing much but some of the recent redbull highlights got me super excited. This dude was crazy. Hope he heals quickly!

pisgahgnar (Jun 2, 2021 at 12:49)
@aquanut: That's cool. I got the tightrope option two months ago and I'm feeling great: www.arthrex.com/shoulder/ac-tightrope-technique. Generally used for AC separation, which I had, but it also pulled my fracture back into place.

BenTheSwabian (Jun 2, 2021 at 12:20)
So now there's a decent chance that MVDP wins most of the rest of the XC races this season

GSPChilliwack (Jun 3, 2021 at 8:44)
If a rider can be muscling a 300hp MotoGP bike around the day after collar bone surgery, I'm sure this won't be too much of a setback.

Madfella (Jun 2, 2021 at 15:42)
Perhaps something more sinister... an extremely obsessed competitor who is also vying for gold at Tokyo?

peterknightuk (Jun 9, 2021 at 11:26)
What an absolute animal! Super excited to see Pidcock race this season and glad it hasn't interrupted his training too much.