Join Pinkbike  Login
47 Comments
This past weekend Tracy took home the World Championships by an astonishing 7 seconds! We caught up with Tracy to get a few insights into her race. Also Trek is celebrating this win by offering a free commemorative poster to the first 2500 people to sign up shipped anywhere in the world. Sign up here!

This win was 15 years in the making for you, has it fully sunk in yet?
I think it only really felt real when I saw the first photo of me in the jersey on the internet the following morning ! To see myself wearing that jersey I have dreamed about wearing made me realise I had finally done it ! It feels amazing. 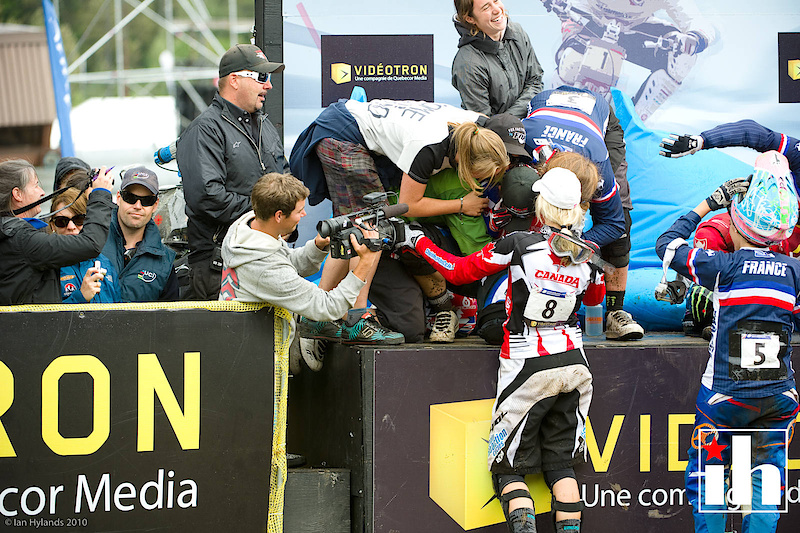 Where was the first World Champs you rode in held?
1995 Kirchzarten, Germany

How close had you come before this? What was your best World Championships result?
I have had 3 silver medals, one as a junior in 1997, and senior medals in 2006 and 2009. 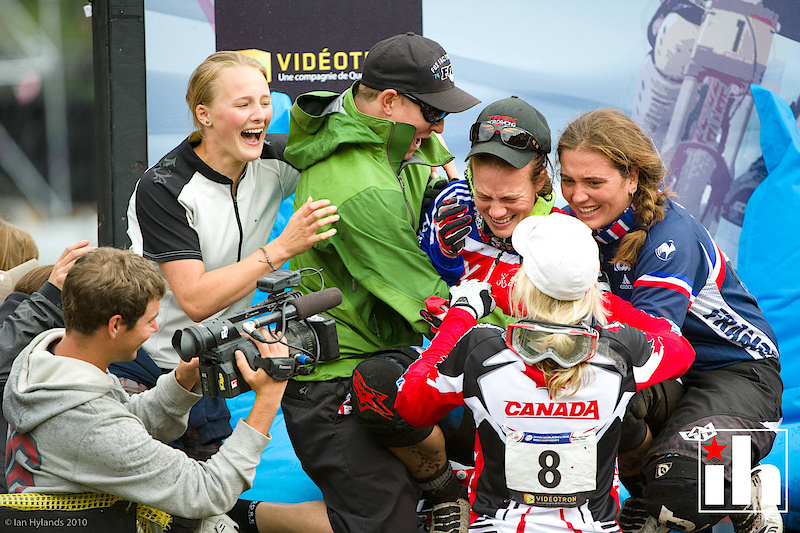 What major setbacks have you had along the way?
I have been pretty fortunate with injuries along the way, only missing one worlds in 2004 due to dislocating my shoulder. The most devastating worlds was Fort William in 2007 where I really wanted to become World Champion on my home soil, but only 50metres into the track I destroyed my back wheel in some rocks and my dream was over. That was a pretty tough worlds to deal with.

Can you describe your first race ever? Word is it was an XC race on the family farm in Worcester.
My first ever race was on my home farm in Worcestershire. My brother had just started racing and riding xc and the local club ran a race on my parents farm. I was such a lazy kid and hated going uphill but I did it on a borrowed Muddyfox bike ! 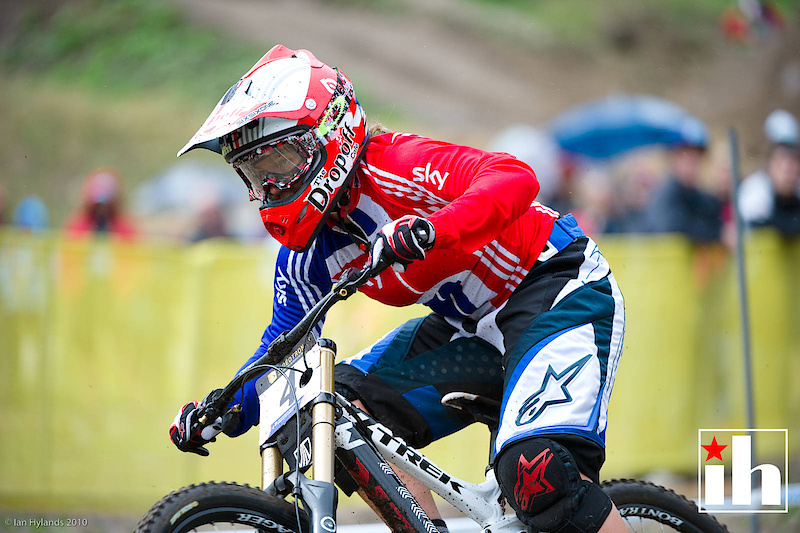 Can you describe how Women's racing has evolved during your career, and where you see it in the future?
Although the numbers of women racing have not got any better since I started racing the standard has increased so much. The time difference between the winning men’s and women’s time I think gets less and less each year and the lines and gaps the girls are trying now is pretty cool. I think it will only get better and better as more girls start racing younger and ride with the boys and just develop some great skills. 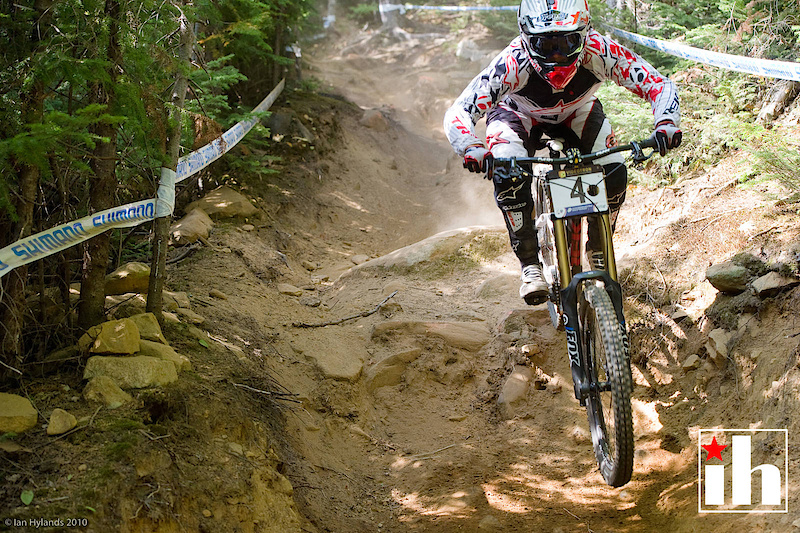 How is it riding for Trek World Racing?
It’s been a great opportunity to get to know the guys behind a company like Trek. They are so keen to develop the bikes and always looking to the future it’s a very exciting company to be part of. Being part of a big team has also been fun and really helpful not having to plan my travel and all my bike mechanics are taken care, I’m pretty spoilt.

You're a powerhouse rider, how suited was the Mont Sainte Anne course to your riding style?
Yeah, I have always enjoyed riding at Mont Sainte Anne, it ‘s the one world cup venue I have been to more times than any other. I like the long, high speed nature of the track. I think this year it was less fun as they had taken out some of the technical stuff and made it a bit too man made for my liking. However I think the rain made it more interesting and turned the top section into a pretty hard pedal which I think helped me on the day.

Favorite rider of all time?
Has to be Steve Peat, he’s been an inspiration for me all along my career and seeing him win worlds last year gave me the belief that one day I might be able to win the thing too !!

Any shout outs or words of wisdom?
Just a massive thanks to everyone who has helped me along the way, from the early days of my parents and brother taking me to races all over the UK and for my brother for making me do my first DH race, to my first sponsor, Volvo Cannondale in the UK, to 9 years with Kona Mountain Bikes who really gave me the opportunity to have a go at making racing my career and for the final 2 years of the support of Trek World Racing. A massive thanks to James my boyfriend for all his endless support and encouragement over the last 4 years, he really has made being on the road so much more fun when you can share it all with someone so special to you. It’s been a wicked journey and my words of wisdom would be, just stick at your dreams and goals, as one day all your hardwork and dedication will be worth it !!!!!! 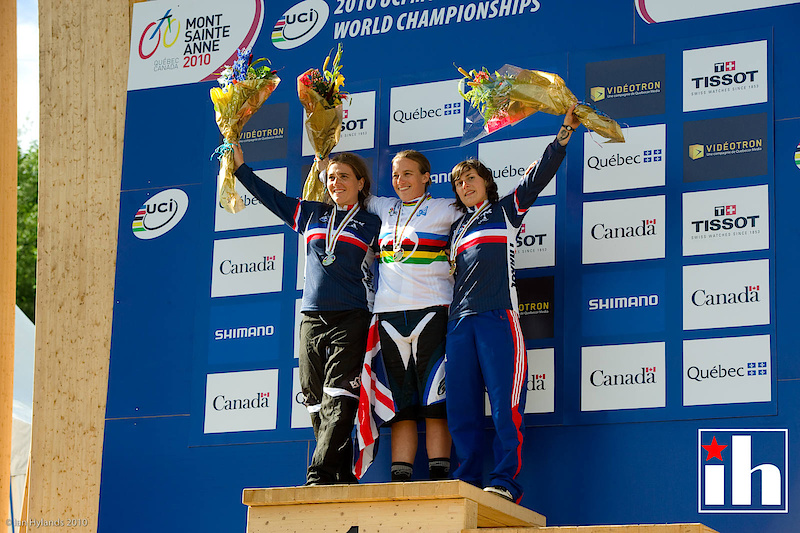 tne613 (Sep 10, 2010 at 11:19)
I'm just stoked Tracy finally took home the stripes! From my encounters with her, she's always been a really classy athlete and takes the time out to truly appreciate her fans! Congrats Tracy!

KyleIsaman (Sep 10, 2010 at 13:17)
at least now everyone will forget about ordering them and it will be a nice surprise in the mail!