Trailforks Aids in Another Rescue of Injured Mountain Biker in Penticton, BC 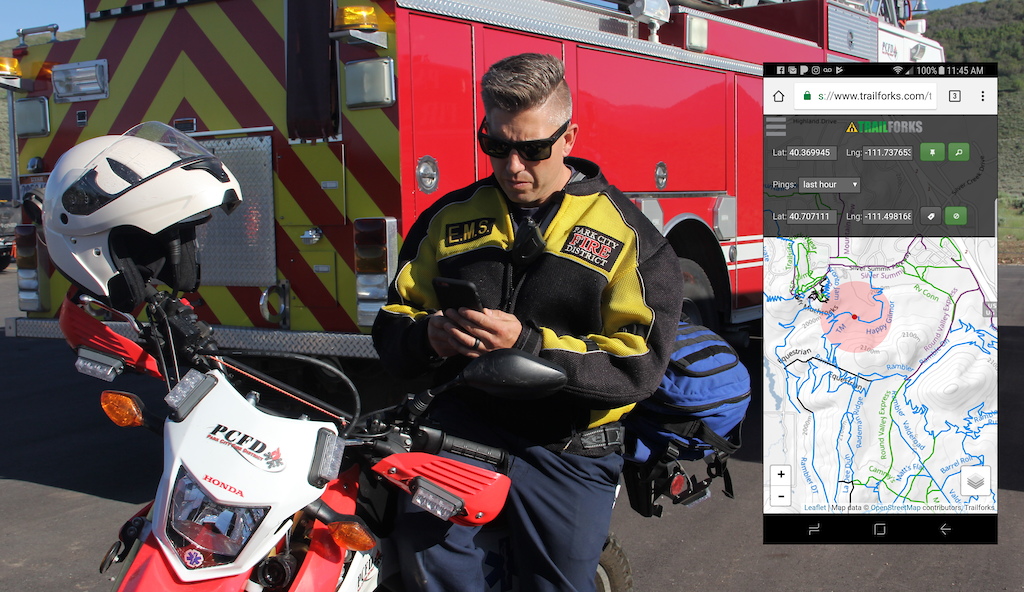 Trailforks working with Park City Fire Department to discuss search and rescue.
Just a little over a month after we reported on the Trailforks app being used to help locate an injured mountain biker in Penticton, BC, and now search and rescue crews in the same area have utilized the app once again.

According to a press release, the 25-year-old mountain biker was on the Three Blind Mice trail network and received a severe injury to their leg on July 6th. An off-duty firefighter at the scene assessed the situation and provided location information using the Trailforks app to search and rescue. Along with BC Ambulance, the PENSAR helicopter team was called in to transport the rider off the trail.

The Trailforks SAR interface shows your position with included accuracy bubble and the coordinates of the injured rider. As you travel towards the victim, the map auto-zooms in to always show where you are in relation to the target. You can reset the target if information changes and the interface will auto-reset zoom and location to include your location and target. 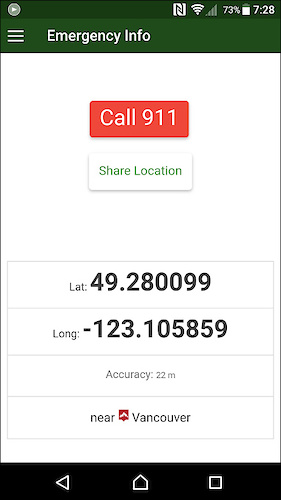 The Trailforks user side emergency interface.
The real power of the module comes in the accuracy of the Trailforks data and the outdoor usability of the map interface. When you have to glance down at the map in full sunlight, having accurate trails overlayed on our high contrast custom basemap makes location acquisition quick.

On the Trailforks application user side, there is an option to use the emergency button which will both dial out to emergency services and provide their location in large latitude/longitude numbers. On some phones, when tracking is not being used within the app, the location that the phone reports can sometimes be way off. Some phones will try to use Wifi triangulation or other means to estimate location. Using the handy emergency feature in the app will force the phone to try to get a good GPS fix and report your location in big and easy to read numbers.

Usage of the 911 dial-out feature in the Trailforks app is not required for the SAR module to work, as they run independently. Often the PCFD relies on the 911 dispatch to provide the GPS coordinates as reported by the phone.
Trailforks also has a database of local emergency numbers, so if you're traveling and have an incident and pull up the emergency page, the regions local emergency number will be shown. Bike Parks can even enter their SAR number rather than riders calling the local towns 911.

From the emergency page, you can also "Share" your location which will generate a link. When sent and opened by another user a pin of your location will open on their app or website.

For more information on how your SAR Group or Rescue outfit can get better connected, send an email to: support@trailforks.com

Toryt7 (Jul 9, 2019 at 12:33)
Whether or not this is advertising, Trailforks still kicks ass and has revolutionized the way we travel and explore with our bikes.

natewynanscreations (Jul 9, 2019 at 12:37)
I'm a dispatcher for BC Ambulance, and we use Trailforks on a regular basis to locate patients!

MikkelStJean (Jul 9, 2019 at 14:40)
@CMihalcheon: Yup I was expecting an update, but after a quick scan looks like all the same information with a slightly different intro.

taskmgr (Jul 9, 2019 at 21:08)
It's a sketchy area to ride and people are seriously injured there often. There are a ton of high consequence areas and unneccessarily sketchy lines. You will see way more news like this in the near future.

letsgoridebikes18 (Jul 9, 2019 at 21:58)
The case prior was in riding zone called Campbell Mountain. This more recent one is in Three Blind Mice, which are close in proximity but vastly different when it comes to the terrain.

It was on bronco which is in the mice. Maybe you should learn the area better?

friendlyfoe (Jul 9, 2019 at 22:51)
@makripper: Go have a sit down bud. The trails in Penticton are perfectly well laid out BUT also have many high consequence lines, hence why many of them are marked black. The trails are mostly rock so there is nowhere soft to fall. Just the nature of the terrain, don't like it then don't ride here.

letsgoridebikes18 (Jul 10, 2019 at 8:40)
@friendlyfoe: I think he's just bummed that he doesn't live here anymore. For what it's worth, the Mice is a lot easier to navigate now than it used to be. PACA has been putting in a lot of work; new signage, trail maps, etc.

Getupcycling (Jul 10, 2019 at 8:45)
Not confused, a different rescue. Last one in the Mice Bronco this was on Drops a lot.... and happened to be the same off duty firefighter on scene (this time came upon the scene, last time was in the group with the injury) . In penticton we have been working with PACA (penticton Area cycling association) and PENSAR for 3 years to educate our members and riders visiting the area on using Trailforks to support quicker rescues and accurate locations, and we bring in Adventure Smart to help further our education efforts for all trail users.

There also was a campbell mountain rescue this week as well.

dldewar (Jul 9, 2019 at 23:27)
Lets be fair to the Mice - it's a great area. I am a new resident to Penticton and spend lots of time in the Mice. A BLACK DIAMOND is a black diamond and deserves respect. The trail difficulties in the Mice are very consistent. As always riders should ride black diamonds with care confirming lines etc... or riding with someone ahead of you that knows the trail and guide you though it. Consider how popular a destination three blind mice is - it is regrettable - but not surprising that there is the occasional injury - but I will point out that people get injured on the KVR or heck even Campbell Mountain as shown by a previous Pinkbike article. My 10 and 13 year old refuse to go to Campbell Mountain as they find it too easy - says something. I have ridden Bronco several times and I am an old school XC racer reinventing himself with a Hightower and a gut. The one line you cannot see ahead on the trail PACA has signs warning riders. Comparing it say to Overnight Sensation in the legendary NIMBY 50 race in Pemberton - I would say it is clearly easier. Riding in Penticton does make you up your game, period. But so does riding in many other areas. I hope the injured rider makes a quick and complete recovery. Lets not throw shade on the great trails in Penticton!

wolfe1027 (Jul 10, 2019 at 8:19)
As a first responder I would love PB to make a video tutorial showing the emerging features and how to utilize them fully. It could easily be added to the fire, rescue, and paramedic training sessions. Would be a lot better than trying to explain it to the crew on route.

ddean (Jul 10, 2019 at 10:47)
Cool - how about another Emergency feature that will push an EMergency notification to others who have the APP who are within X km of the person in need? More of a call for help to a stranger than a 911 call. Id enable push notifications on my phone to allow that if that functionality was enabled.

korev (Jul 10, 2019 at 5:01)
I just fired up the app. I was pleasantly surprised that it had the Swiss ambulance number, but the location in it was approaching 10KM off (Muttenz vs St Johan, Basel if you know the area) even though the mapping app seems to pick up my phone's true location...

topsog (Jul 10, 2019 at 10:50)
People should stay away from The Mice. #itsuckshere.
Below threshold threads are hidden

STMCO (Jul 9, 2019 at 11:55)
SAR teams locate lost and injured backcountry users everyday with maps. This is NOT news, its marketing. Boooooo.

Captain1Eye (Jul 9, 2019 at 17:38)
Whats wrong with advertising to users that they can easily tell search and rescue where they are using the app if they do injure themselves and that it actually works?