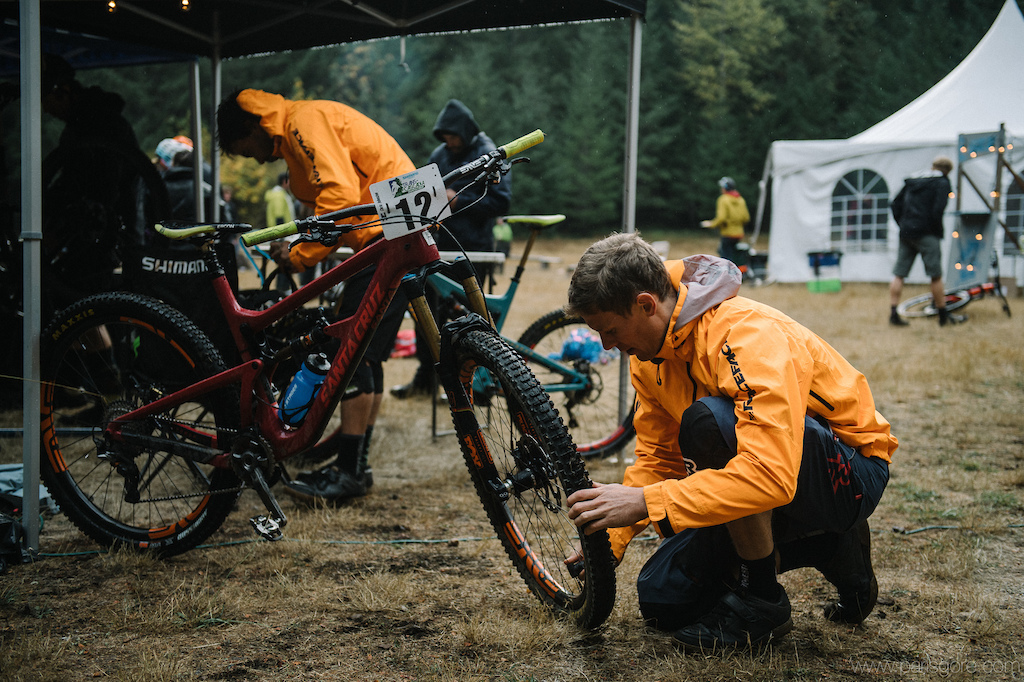 Chris Johnston prepping his bike for a big day ahead and checking tire pressure for the more damp terrain. 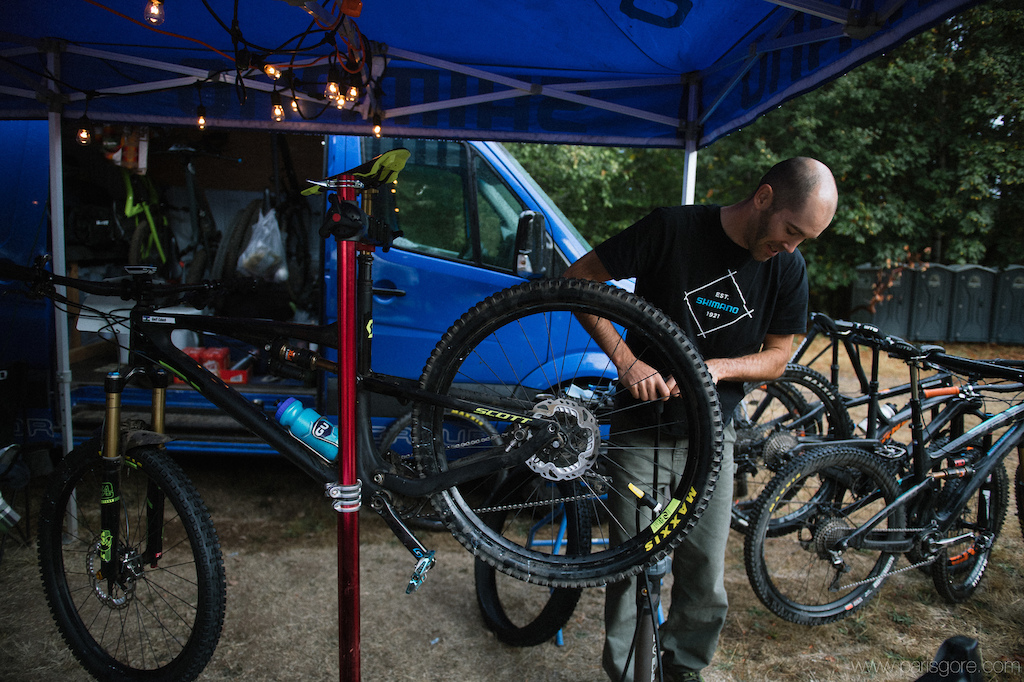 Current leader Geoff Kabush taking care of some last minute fine tuning in the Shimano pit.
The excited energy at basecamp this morning was palpable. Not only was a massive day of blind racing on the horizon for the participants, but it was a completely new course for the event team as well. Today’s stages represented the essence of why Trans-Cascadia was created. “It’s exciting,” said Rosara Joseph, wearing her leader jersey. “New trails are always cool – and I’ve heard only good things about today from people in the know!” 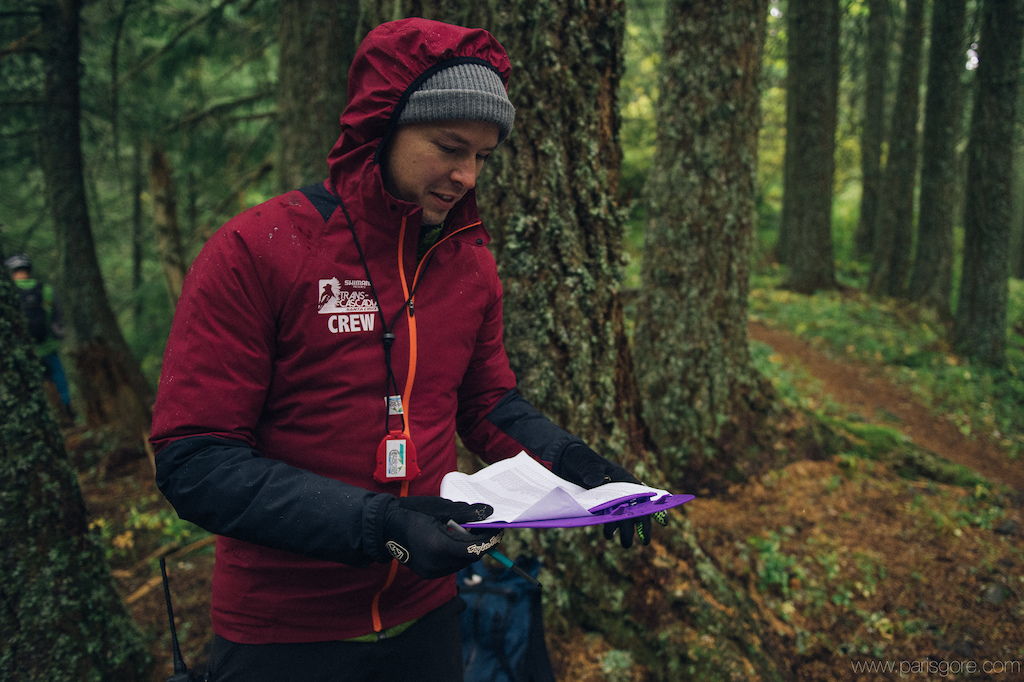 Billy Lewis ready for action at the top of Eula on one of the burlier stages today. 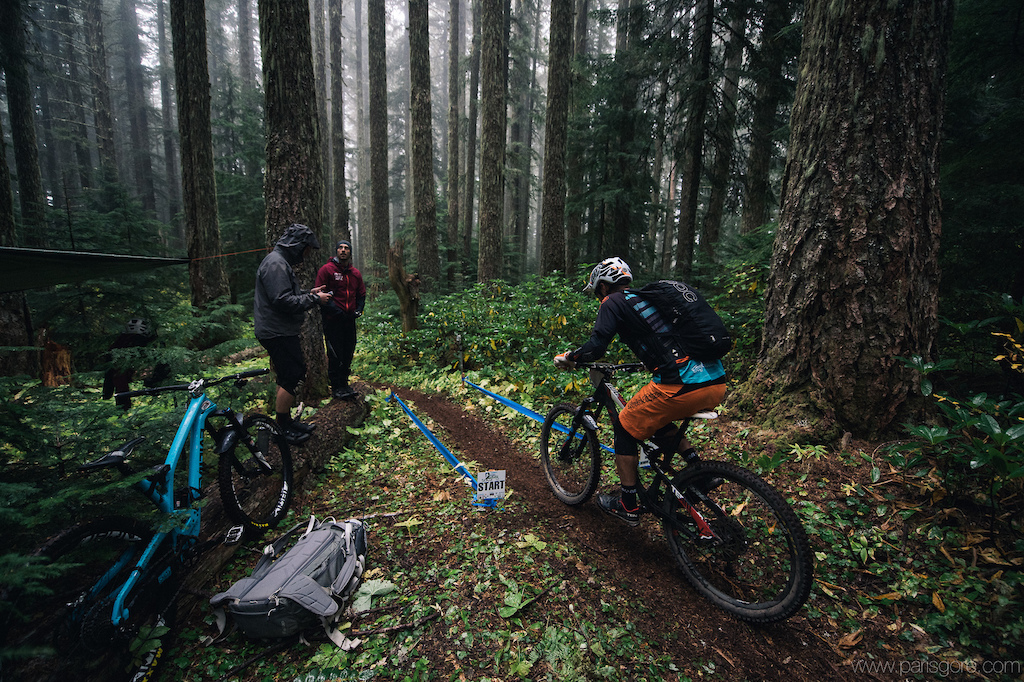 Start of Lawler Trail on the first stage of the day. 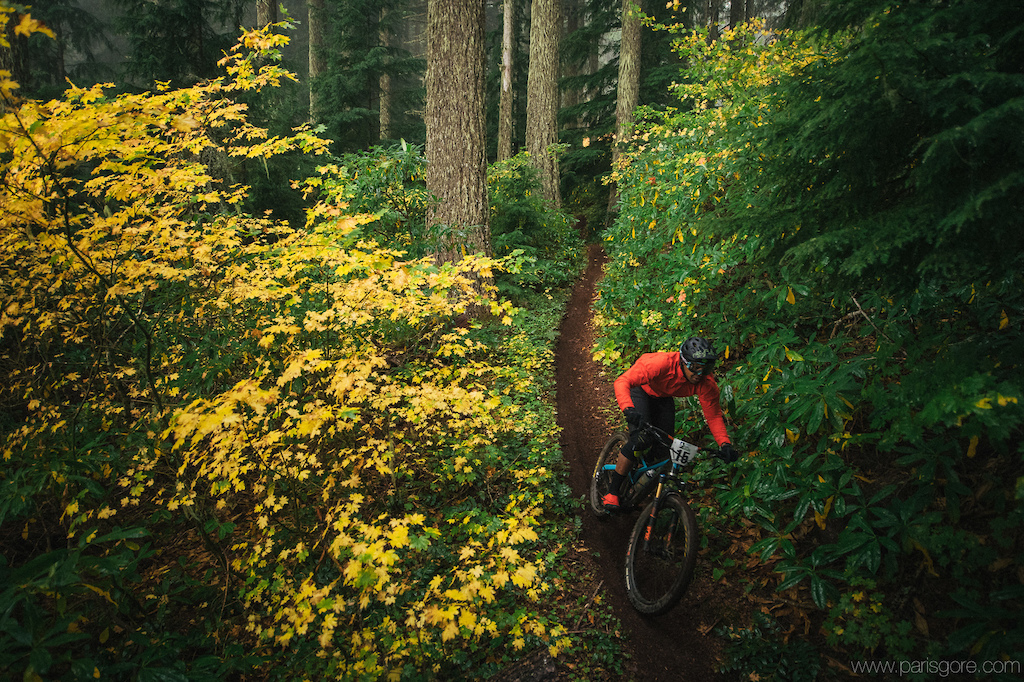 Matthew Slaven rocking a bright orange kit for today being the first of October and hunting season beginning. Even on the road up, there was a lot of hunter traffic soon after the stage ended. 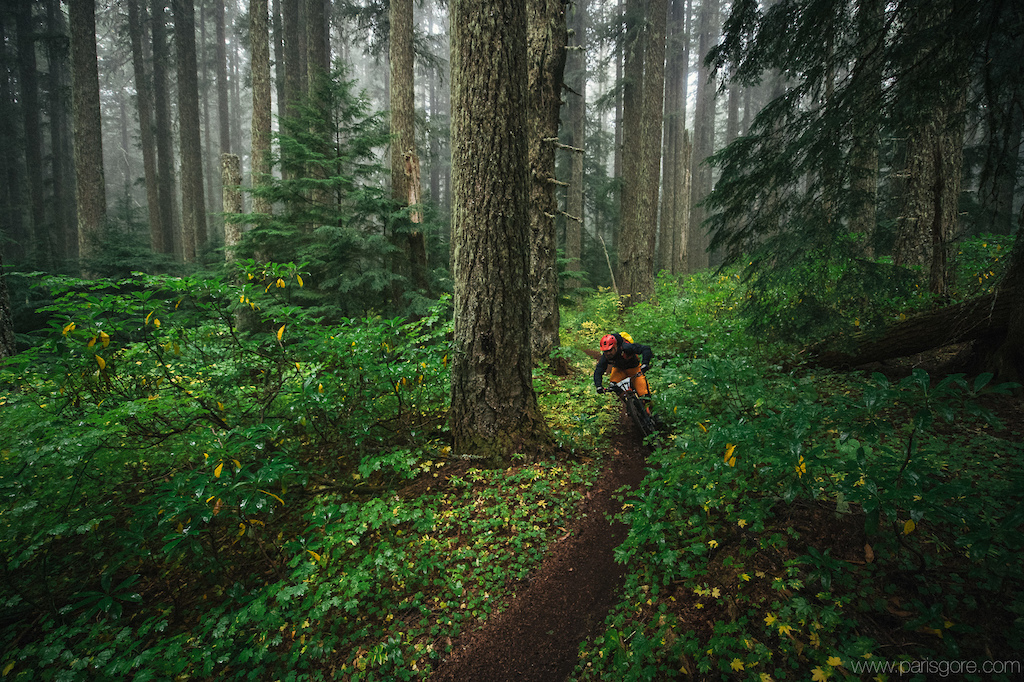 A planned 20 miles of pedalling and 15.5 miles of racing took racers from the trails around Oakridge to their new base camp on the outside of MacKenzie River. Stage 12 and 13 ran down Lawler on Patterson Mountain, a trail that local, Derrick Bell, has been riding for over 20 years. Over the last two years Trans-Cascadia has been working with Kevin Rowell of the Forest Service, Derrick Bell, the Eugene Trail Club; Disciples of Dirt, and Dirt Mechanics; a recreational excavation company, to extend the trail to the bottom of the mountain. “You used to pop out on the top of this gravel road and descend on it for about three miles; it was always kind of a buzz-kill,” explains Derrick. Money raised by the Disciples of Dirt and Trans-Cascadia paid for the necessary trail work, and Dirt Mechanics donated machine time and subsidized a good portion of the build. While the trail is not yet officially opened, Trans-Cascadia racers were able to experience it today - and locals look forward to it being officially open in the near future. “That’s been a 20-year dream for quite a few of us. And today it’s being ridden on and rained on – perfect!”


Racers shuttled back up to the top of Hardesty Mountain to descend Eula Ridge for Stage 14. The finish line was full of a mix of exclamations of love for the trail to cursing its punchy climbs. Chris Johnston thoroughly enjoyed the stage, "there were two amazing descents. The stage could have been broken in two as there was quite a substantial climb in the middle, but there were some really cool steeper rocky descents. It was really loose and down the bottom, there was lots of flow. Man, it was rad!” 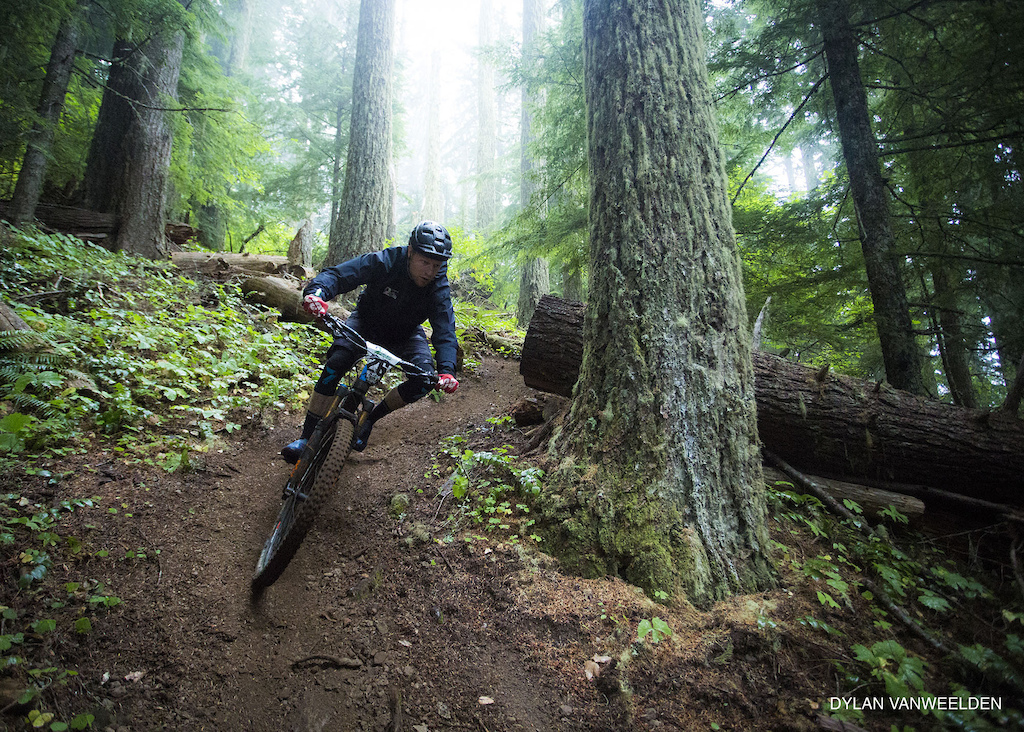 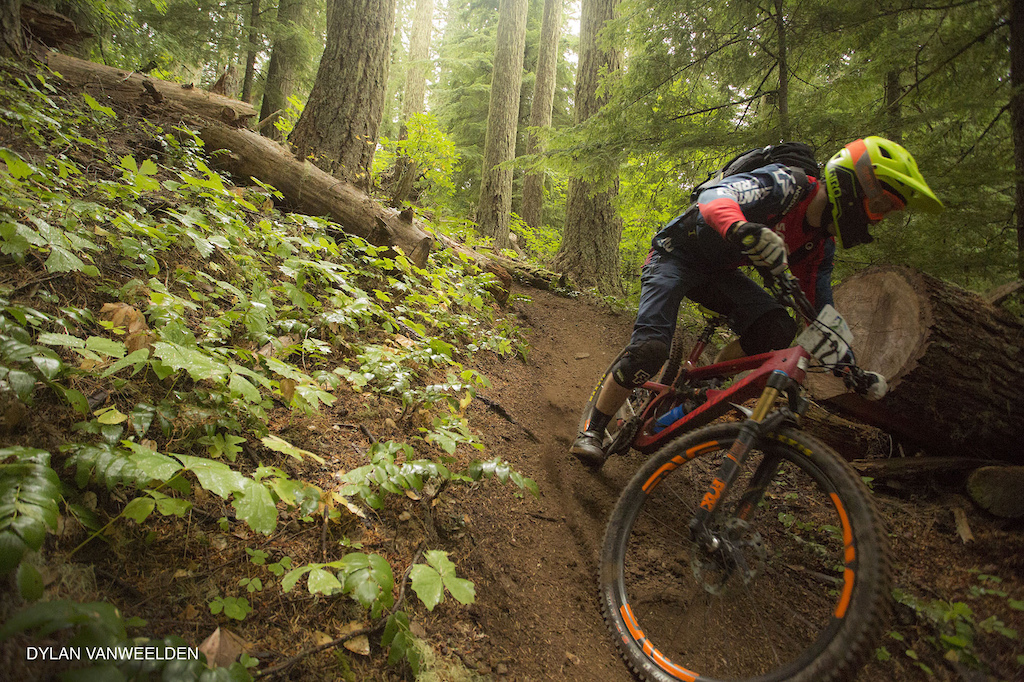 Stage 15 on Grasshopper Ridge was another Trans-Cascadia supported initiative. The backcountry 16-mile trail had a two-hour traverse up and down the ridgeline, through seven wide-open meadows, and ended with a 5.1-mile descent. Native Americans and pioneers used the the ridge for transportation, as it was easier to travel up high and out of the scrub, in recent years there had been little use and much of it was overgrown and difficult to find. Working with both the Oakridge and MacKenzie Forest Service Districts, Led by Kevin Rowell and Tyson Cross, opened up access to revamp it as a rideable mountain bike accessible route. “This year the trail got completely cleared. Trans-Cascadia did a couple campouts and work parties on Grasshopper with the Santa Cruz and Shimano crew; they did good solid work,” says Derrick. “Opening Grasshopper trail to me is huge, this year with the help of Trans-Cascadia, we opened 18 miles of trail in a short amount of time.” 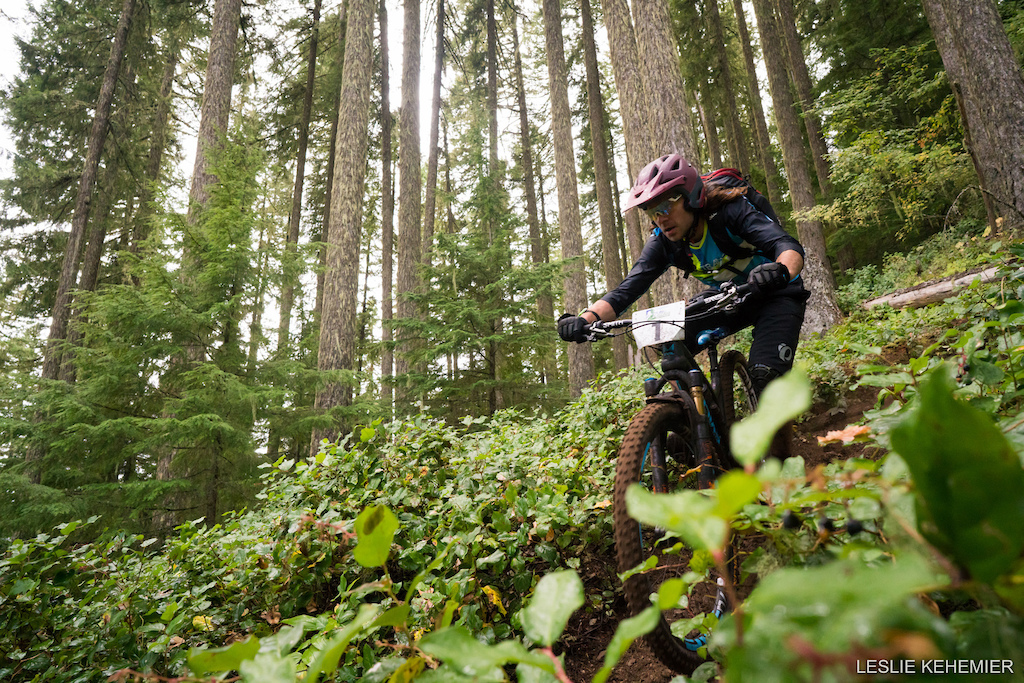 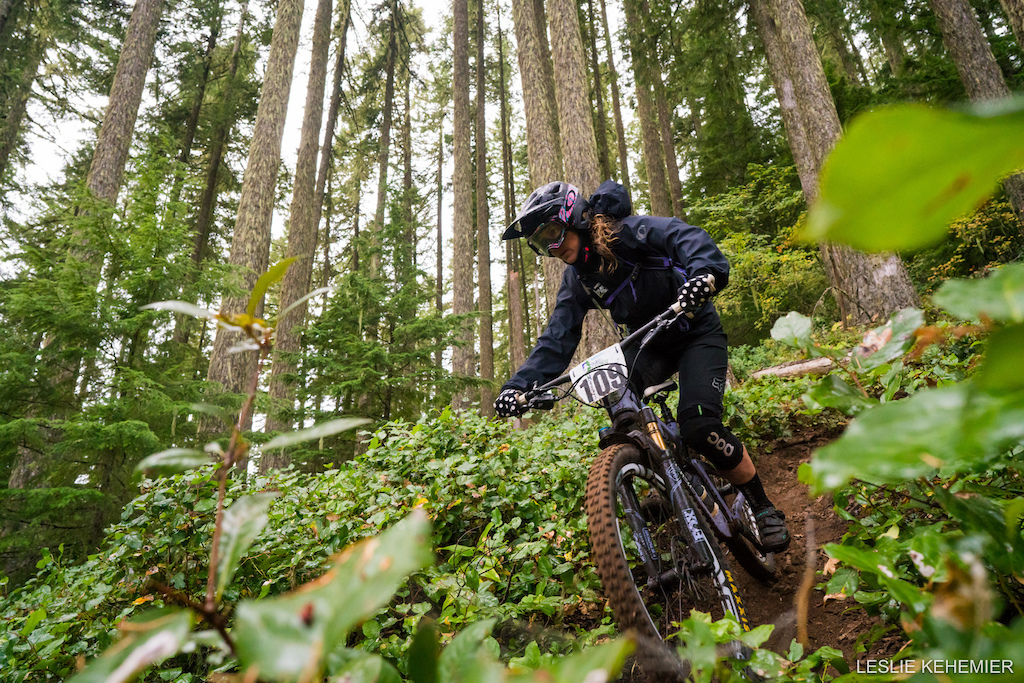 Unfortunately, Nick Hardin went down on Stage 14; breaking his collarbone, and had to be extracted from the course. Mark Weir acted quickly, giving up his race run to help Nick – and serving as a reminder that when it comes to backcountry racing, people come first.

Due to the course hold of nearly an hour, the last bus of racers missed the cut-off for Stage 15. The results for this stage weren’t counted in the overall – but everyone was in agreement that the right decision was made in respect to everyone’s safety.


Those racers who did ride the stage experienced everything from rain to sleet and snow – but a warm fire at the top helped keep spirits high. Geoff Kabush was one of the racers who rode Grasshopper, “it was beautiful up there! It was fun putting the ‘trans’ in Trans-Cascadia. At the end of the day I think [cancelling the stage] was a good call; everyone was getting pretty tired and it was getting dark. And I got some bonus fitness in there.”


Geoff’s strength in pedaling on today’s long stages earned him a further lead over Chris Johnson. “There is some amazing descending, some really good sections, but the climbs just far outweigh the technical sections and I find it really challenging to attack the climbs and keep competitive,” said Chris. Peter Ostroski held on to 3rd place. And Rosara continued her winning streak, taking home her 8th straight finisher jersey. 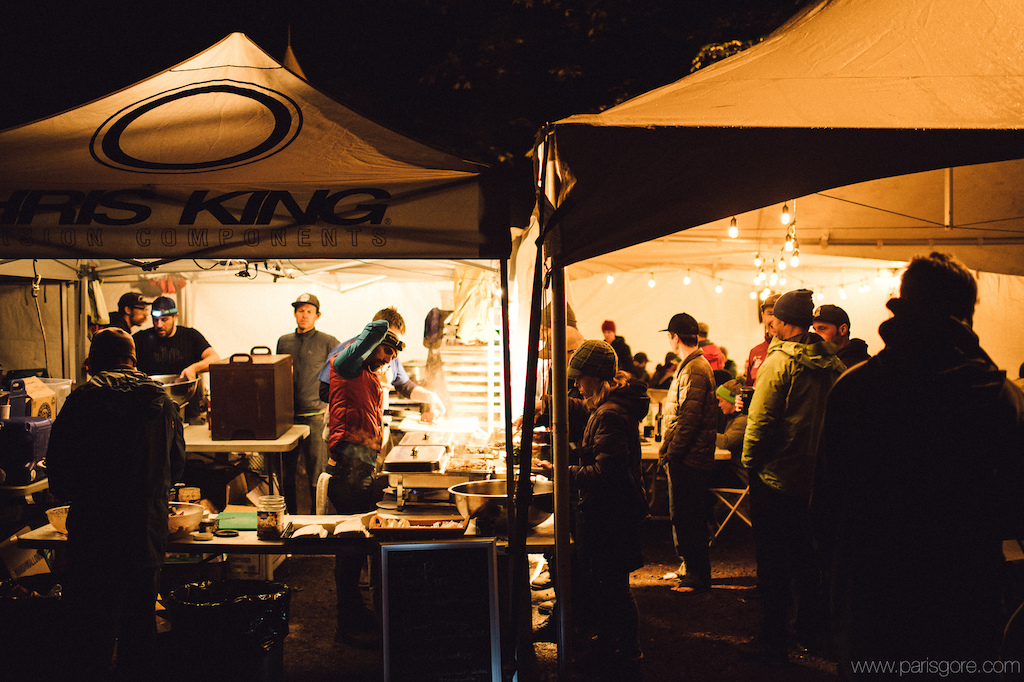 Dinner time after a long and exhausting day. 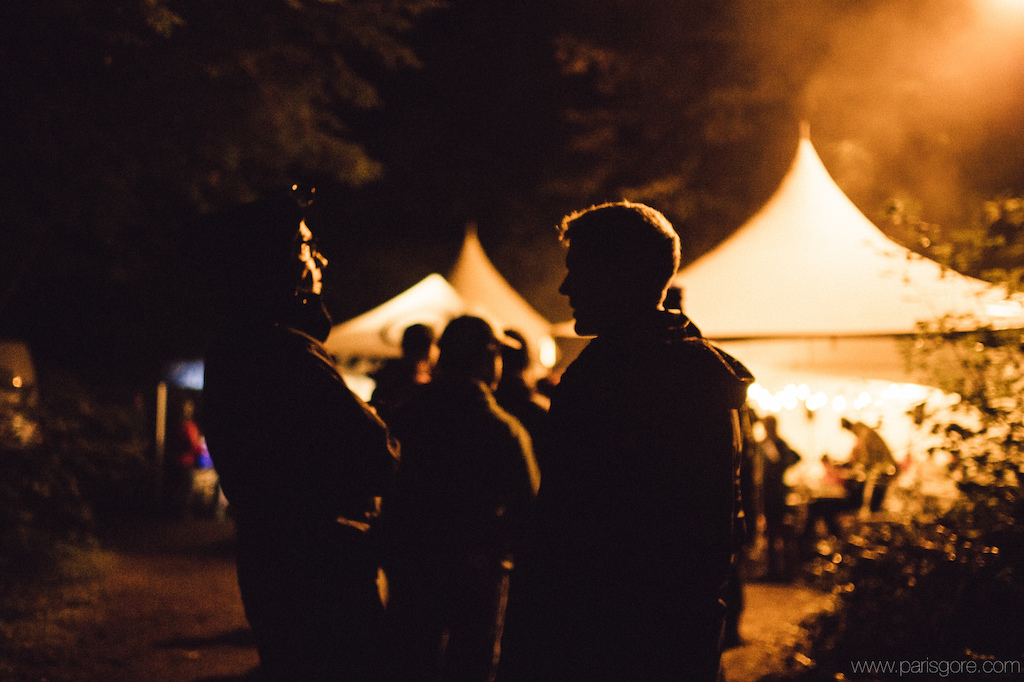 Despite some logistical challenges and injuries today, the field of racers settled into their new base camp tonight – tired and happy.

Kudos to Mark Weir for helping out the injured rider. That kind of spirit means more than any podium as far as many are concerned, including myself.

Hardtailashlander17 (Oct 2, 2016 at 19:49)
I worked last summer on Grasshopper ridge with my Northwest youth Corps crew. Stoked to hear it actually got raced this year!

KnobbyDrifter (Oct 2, 2016 at 20:26)
Incredible coverage!! Big thanks to Derek Bell and the Trans Cascadia crew for making Oakridge an even better place to ride. Cheers!

seylerc (Oct 2, 2016 at 12:32)
Being an Oregonian, that jumped off the page at me too. I am so happy that we have this in my backyard. Many benefit from this being here, but I love that we see trail updates and see top guys shredding the local trails. The photos are amazing as well!

tbmaddux Plus (Oct 2, 2016 at 15:15)
There are places on the shuttle up to Alpine where the rhodies are 15-20ft high and would have overgrown the road completely if they weren't cut back.

InsaNeil024 (Oct 2, 2016 at 17:43)
That was amazing! I love the editing, cinematography and music. This event looks sick! The trails seem dope and the riders are taking full advantage. I might have to add this to my bucket list.