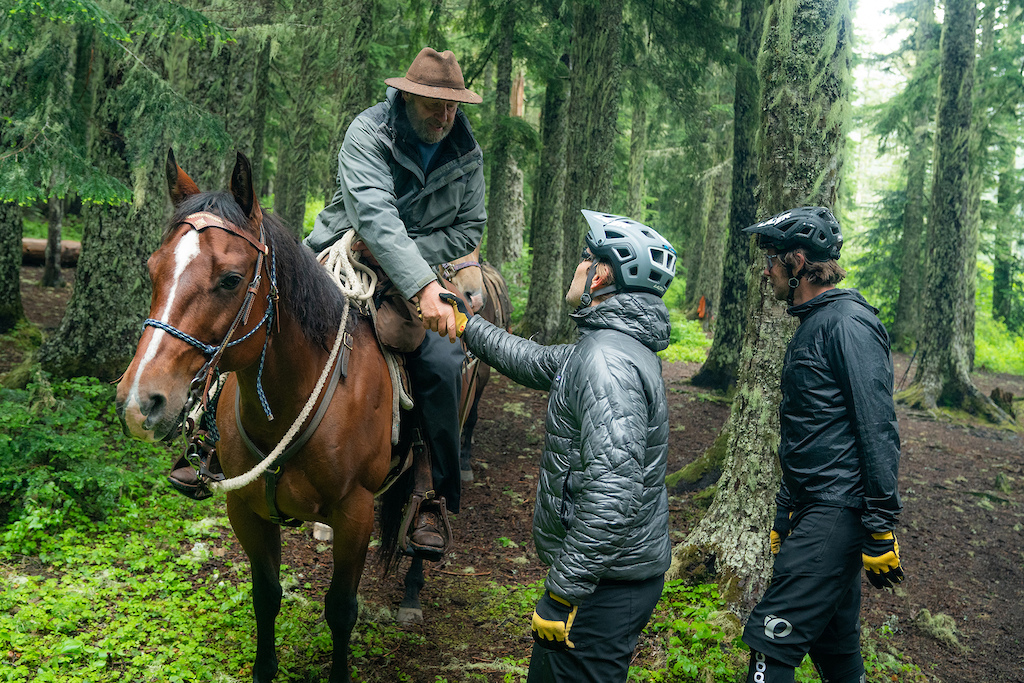 This third and final work party of the 2019 Trans-Cascadia season (pre-race) was the first collaborative event with The Backcountry Horsemen of Washington (BCHW) – a group representing stock trail users.


“We got a call from them last year just kind of out of the blue,” says Trans-Cascadia Race Director Nick Gibson. “They were pumped and thankful for the work we had done clearing out the trails.” When the Trans-Cascadia team had first arrived in the area to the Gifford Pinchot National Forest to prep for their 2018 race, nothing was rideable. Due to road closures, it had been four years since the Backcountry Horsemen had been able to access the area. “They invited us to this legacy meeting that has been going on for 30 or 35 years. There were hikers, equestrians, the Washington Trails Association, the Backcountry Horsemen – and we were the first mountain bikers to ever attend.” 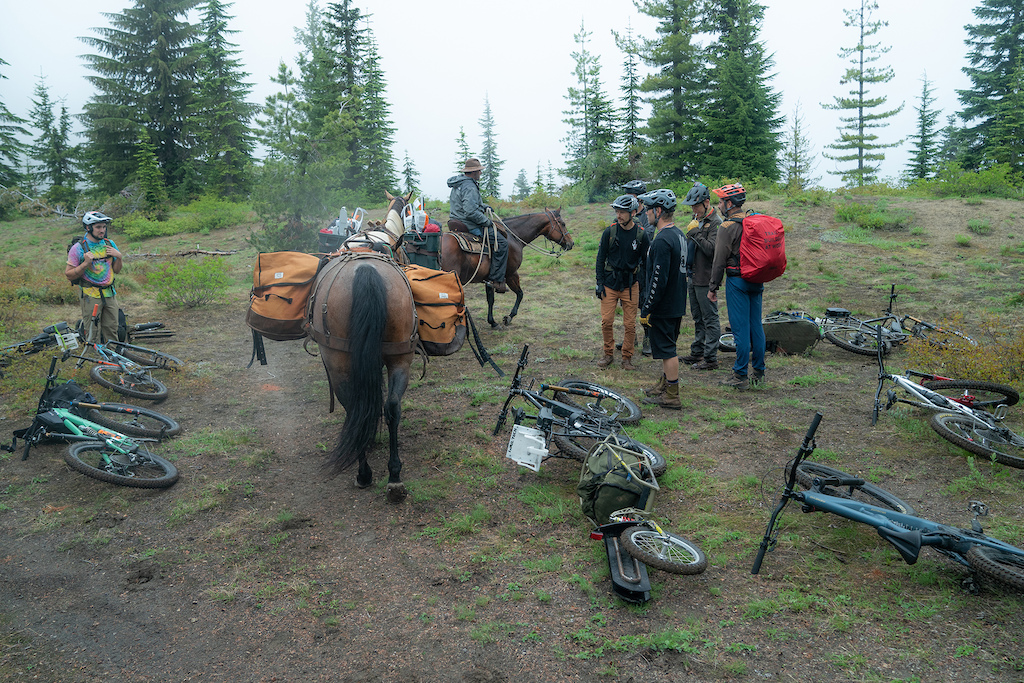 Photo: Dylan VanWeelden
After that, the two organizations began speaking regularly and despite what seems like commonplace conflicts between user groups when it comes to managing trail networks on public land, the collaboration between them was a natural win-win situation. “The places that we're cutting out, even in previous years at Old Cascades Crest and Grasshopper, is stock backcountry area,” explains Nick. “We both need log out to make it happen, so we have a lot in common. And what you find with horse folk, hikers, and bikers is that we all have different skill sets that we're really good at, if you take that collective group and their skill sets and put them together, you get a bunch of good work done that compliments each other.” 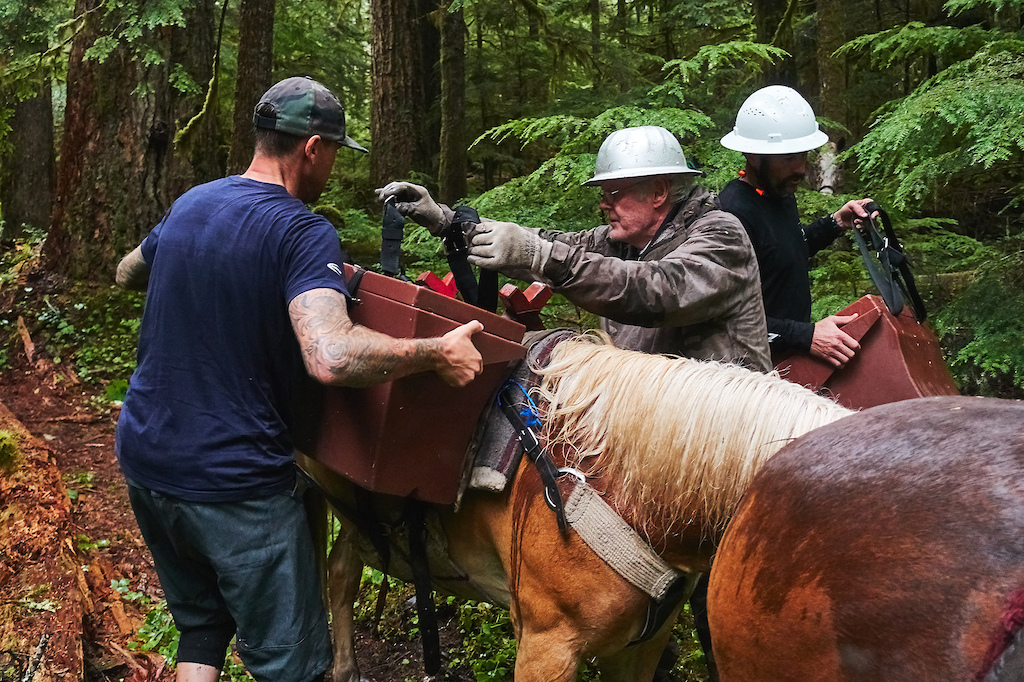 The collaborative project – one of many going on during the work party – that Jason worked on was clearing and putting a puncheon through a boggy trail area. A large tree had fallen on the existing structure and the remaining debris had backed up the creek. Utilizing the experience of some of the professional riggers and loggers from the Backcountry Horsemen and the enthusiasm and numbers of the Trans-Cascadia crew, they were able to replace the damaged crossing with two 24-foot stringers – about 12,000 pounds apiece – cut in place from a fallen Douglas fir roughly 44 inches in diameter. 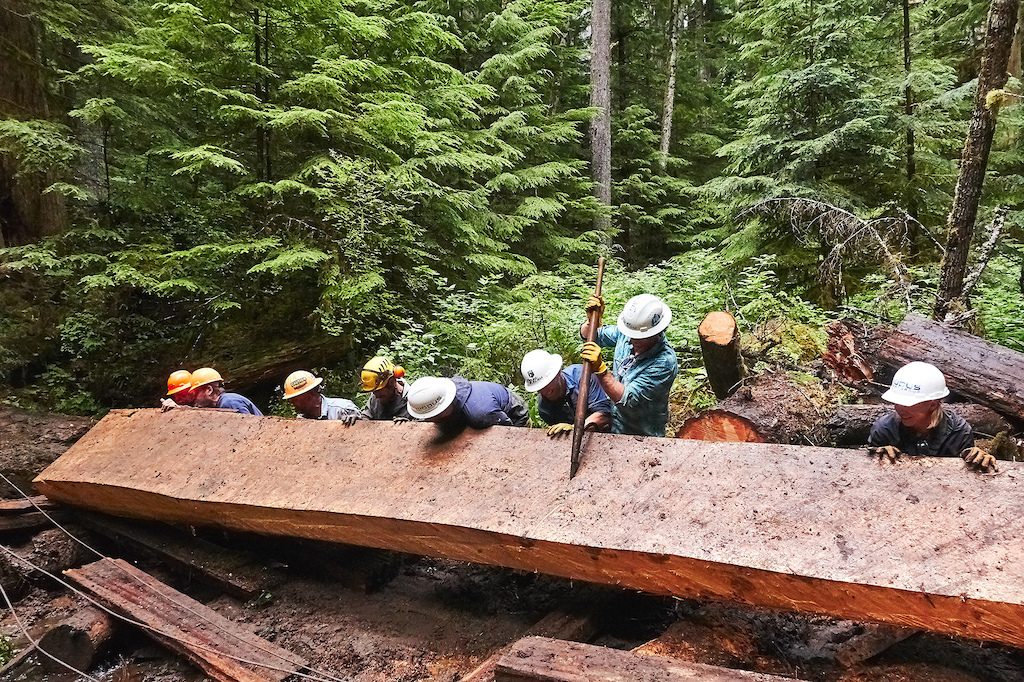 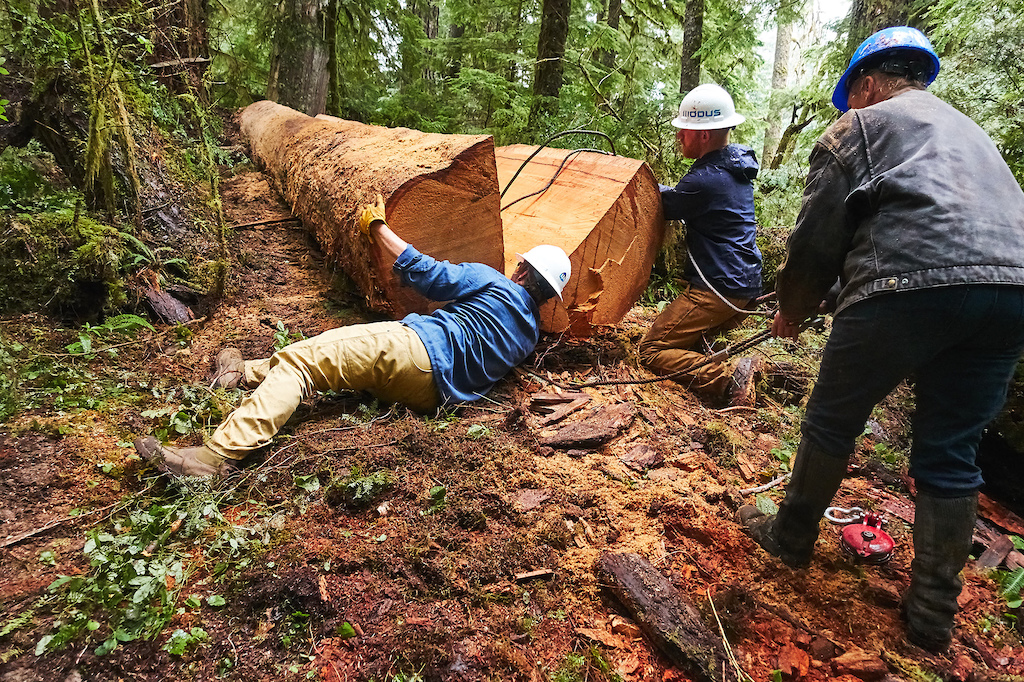 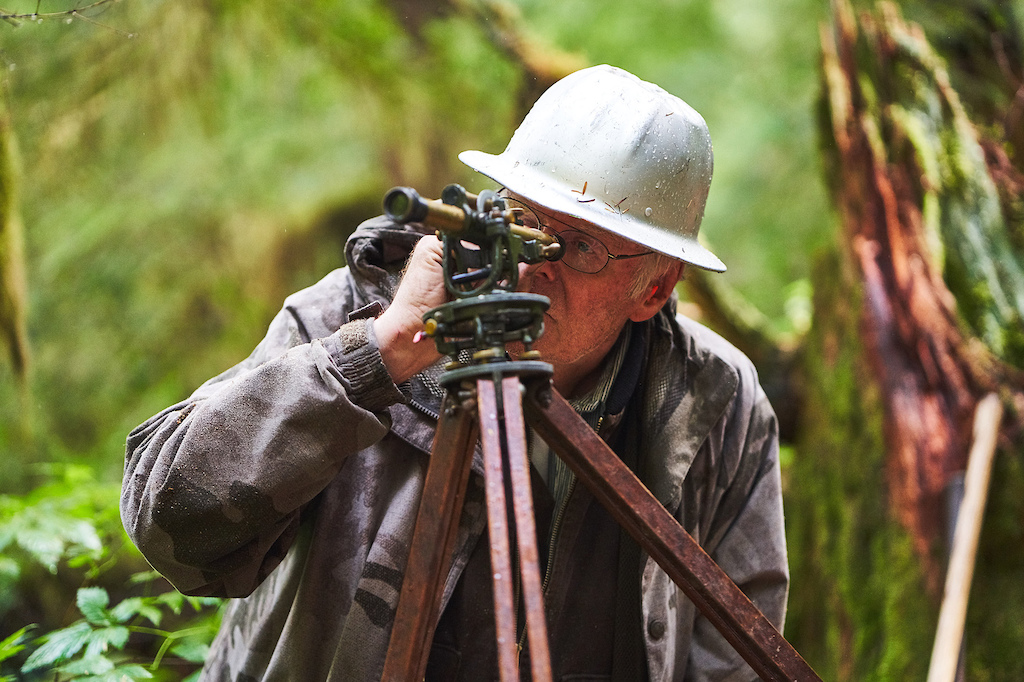 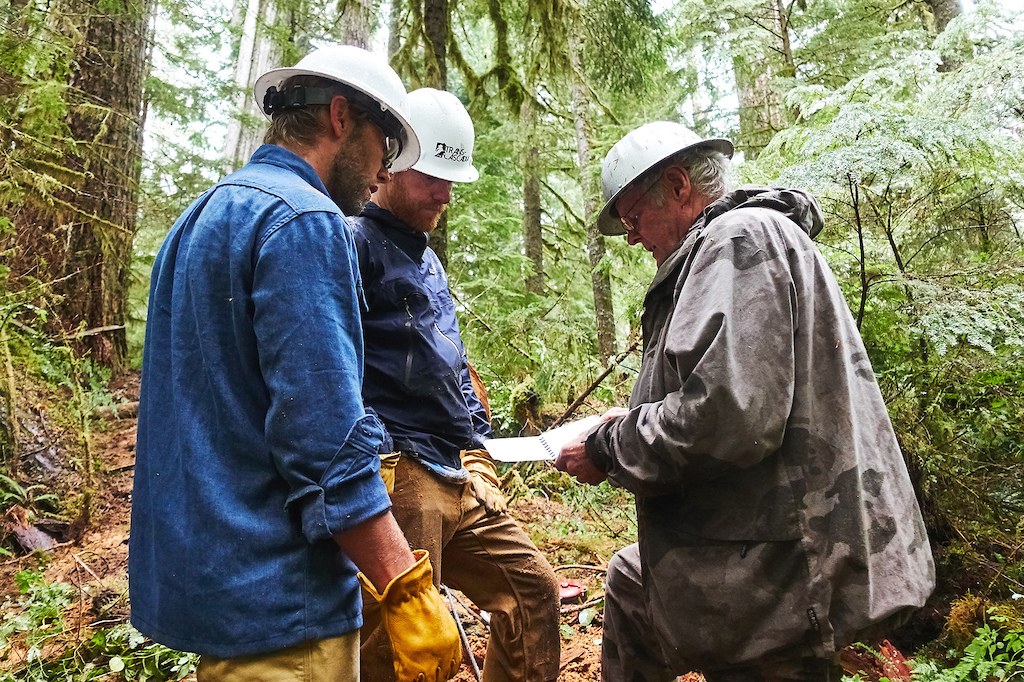 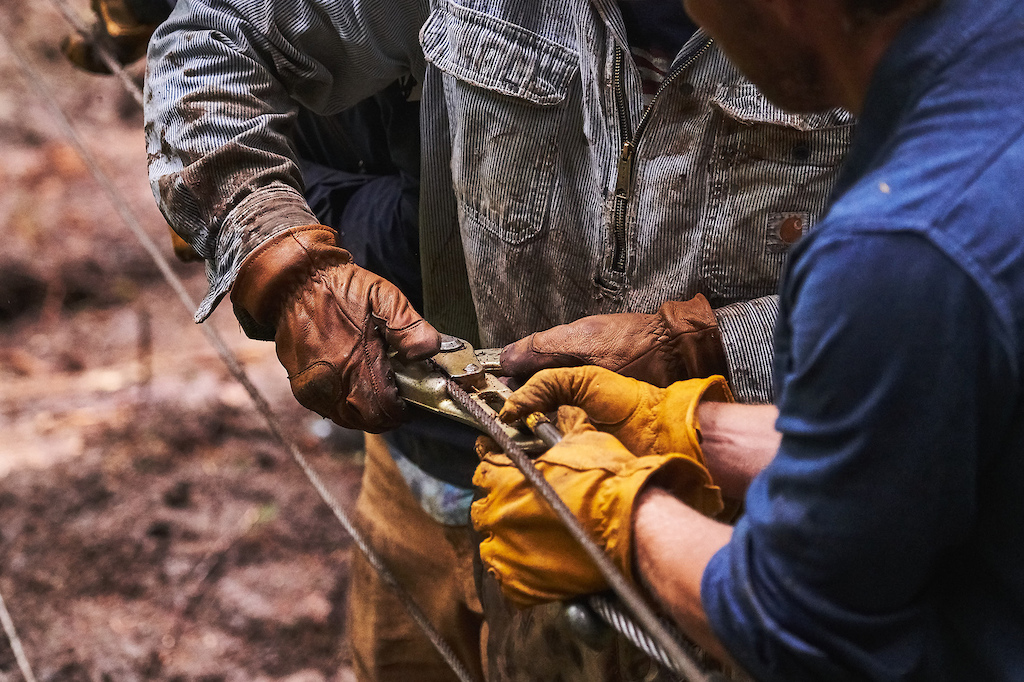 This time spent one-on-one and working as a team seemed to have the most lasting impact when the weekend ended. “We all live the same basic trials and tribulations and to actually work with the people and get to know them as people, not as a horseman, not as a biker, not as a hiker - it allows you to put aside the things that may bother you or that you may still not agree with,” says Tyler Forman, the President of the Cowlitz-Naches Chapter of the Evergreen Mountain Bike Alliance. “We'll never agree with somebody 100% but if we can at least relate to where they're coming from, you can go work together and have a good time and agree to disagree and be happy about it instead of bitter about it.” 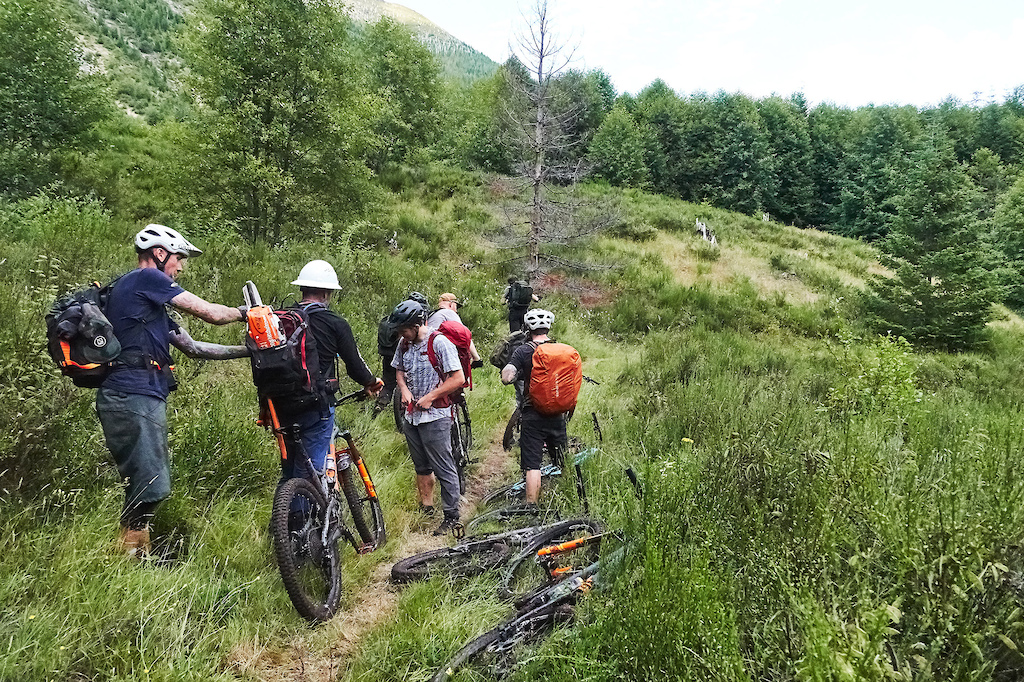 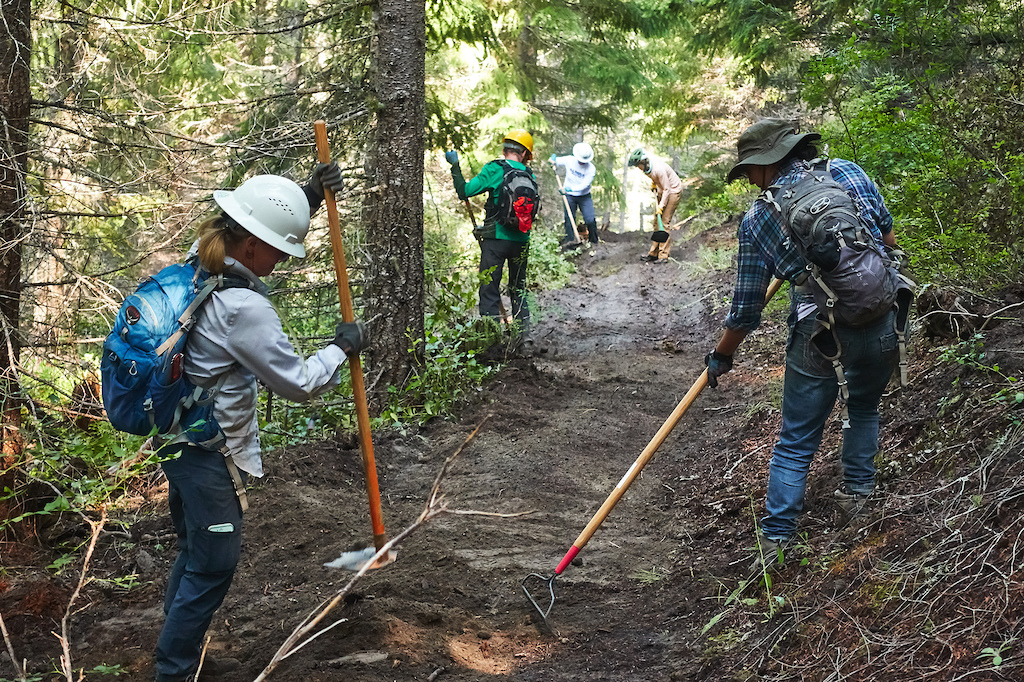 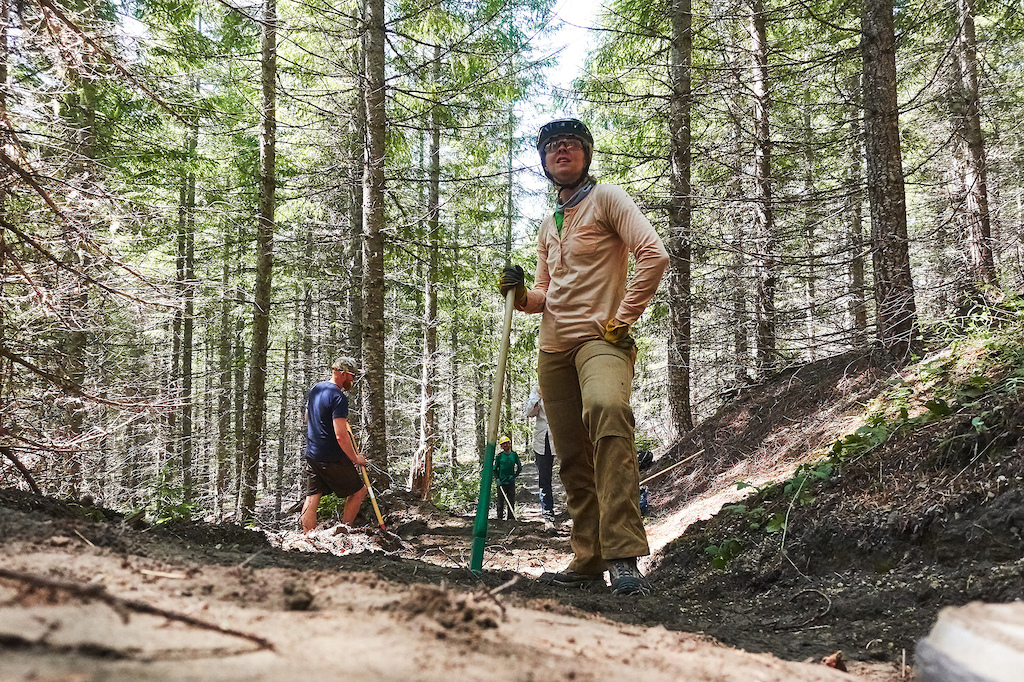 While mountain bikers are the “new kids at the table,” as Nick puts it, the important part is recognizing the value that each group brings. “We are really strong right now and we're really capable, if we use it in a positive way where it's collaborative, it means there are a lot of good resources being thrown at a multi-use trail network that will ultimately make everybody happy. [Mountain bikers] came in in the eighties and nineties and now we're more prevalent, but we were just maintaining what was built out here. We want to talk about the legacy of hiking, horses – they've built and maintained these trails for centuries prior to us. I think we have to be really respectful of that.” 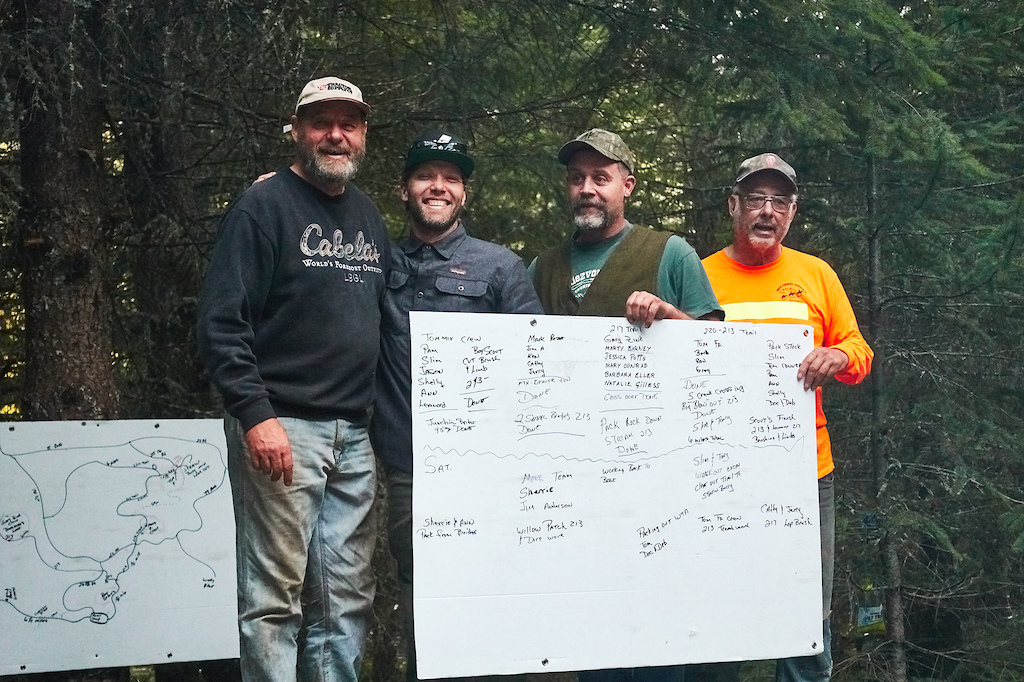 Photo: Chris Hornbecker
On the Saturday night of the work party, after three days of working together deep in the backcountry, the two organizations shared a feast. Following the meal – which included a roasted pig and award-winning Dutch oven apple turnovers – leaders from both groups stood atop a picnic table to address the crowd. One after the next, they checked off a long and challenging list of work that had been completed as the volunteers cheered. The celebration proved that while collaborations like the one between Trans-Cascadia and the Backcountry Horsemen may not be all that common – the positive results are undeniable.

"Mountain bikers came in in the eighties and nineties and now we're more prevalent, but we were just maintaining what was built out here. We want to talk about the legacy of hiking, horses – they've built and maintained these trails for centuries prior to us. I think we have to be really respectful of that.”

xBLASTOFFx (Aug 23, 2019 at 15:28)
True perspective... being appreciative for all the things you enjoy but never worked for, and then realizing that you should probably chip in instead of being a freeloader. This is the only way things get better.

Augustus-G (Aug 24, 2019 at 21:54)
Great to see groups from my two favorite forms of riding come together for the benefit of all trail users. Bravo.

mtbikesince87 (Aug 23, 2019 at 6:10)
Having raced the first Trans-Cascadia and chased down the trails that you guys opened the past few years I just want say thanks for the hard work, Cascadia is better because of you giuys.

preston67 (Aug 23, 2019 at 8:12)
I've been riding these trails for 15 years and there have always been tons of blowdowns and problems. We just spent a week riding there and every trail was completely clear not a single blowdown, no stick chaff. It was amazing ! Made the riding harder because you never had to get off your bike ! Thanks Trans-Cascadia, Evergreen, and BCHW !

Duderz7 (Aug 23, 2019 at 6:21)
That one picture where they're shoulder to shoulder working together to move that huge tree trunk is awesome in it's symbolism. And then there's that one guy..."you guys lift together and I'll poke it with this stick until it cooperates."

supertack (Aug 23, 2019 at 7:12)
That stick is called a log peavey and they are awesome! They are designed to turn logs like this. It's crazy how much weight you can move around with one of these tools.

TheStabbyCyclist (Aug 23, 2019 at 8:27)
The pokey end of that stick is metal and is stuck in the wood. Also, the metal end has a hook coming off of it that is hooked over the side of the log. So that one guy is probably doing a significant amount of the moving in that situation.

kosmowf (Aug 23, 2019 at 7:17)
Great article on a great topic. FWIW, my wife is an avid mtb rider, member of the BCHW, and Treasurer of the local equine club. In our little town, damn near everybody we know belongs to at least two different user groups. Gotta go along to get along!

Bkinzel99 (Aug 23, 2019 at 8:16)
nice this is rad! horsemen are dying off as they get older. hiking is still around but mt biking seems to be growing rapidly. need to get more people comfortable that bikes are not ruining the forests and onboard with us out there maintaining and building.

scblurlt (Aug 23, 2019 at 8:52)
so stoked I'm going to be riding these trails in this years #transcascadia , really appreciate the work involved and the coming together of like minded individuals for a common goal, this is what is needed all over this planet , spread the love for the earth "a place for us all to live free and fore filled

highfivenwhiteguy (Aug 23, 2019 at 8:58)
I have had the opportunity to build and maintain trail with the BCH on multiple occasions, very cool group to work with. Of course there are some horse riders (and bikers) who are turds in the punch bowl, but overall the BCH was open to discussion and were primarily interested in keeping trails open and maintained.

RayDolor (Aug 23, 2019 at 11:27)
I ran into the Backcountry Horseman of California, San Diego chapter, on a ride about 15 years ago. One of them told me, of his volition, that he saw no plausible reason why bikes should be excluded from the PCT. They were all very friendly and showed a lot of curiosity about my bike, helmet, hydration pack, etc. I gotta crosslink this to the SDMBA site, as we could really use friends around these parts.

moolay (Aug 23, 2019 at 9:31)
So good to see such a collaborative effort! This is an important piece to the evolution of our sport!

mattpatt (Aug 23, 2019 at 15:50)
Super powerful, positive story about change for good between these communities who share more in common, than what separates them. Love the message. To all those involved, thanks for organizing and volunteering. I was humbled to spend the first weekend among you, doing my bit to chip in.

yonderboy (Aug 23, 2019 at 11:58)
Evergreen Mountain Bike Alliance is doing so much work in the region. They've found the magic recipe for getting volunteers.

illili (Aug 23, 2019 at 12:18)
After moving out to Washington I really felt compelled to volunteer for them. The amazing trail systems that exist are truly world class and work parties are super fun. They do tremendous work with outreach and talking with other groups as shown here. I'm lucky to call this place home.

Charlesatlarge (Aug 23, 2019 at 12:54)
“When the Trans-Cascadia team had first arrived in the area to the Gifford Pinchot National Forest to prep for their 2018 race, nothing was rideable.”

That’s not remotely true, there is a large group of motorcycle riders who clear trail yearly.

snottrail (Aug 23, 2019 at 16:54)
No photo of log bridge complete, c'mon. Should of had one with all the builders sitting on it having lunch . Like the old timey sky scraper photos.