Join Pinkbike  Login
7 Comments
2016 marks the 8th year of Trek's four women team of lady shredders; Steffi Marth and Katja Rupf have been on board since 2008, Kathi Kuypers since 2013 and Birgit Braumann joined in 2014.

A look back with Steffi, TGG's German Downhill Racer and Freerider: 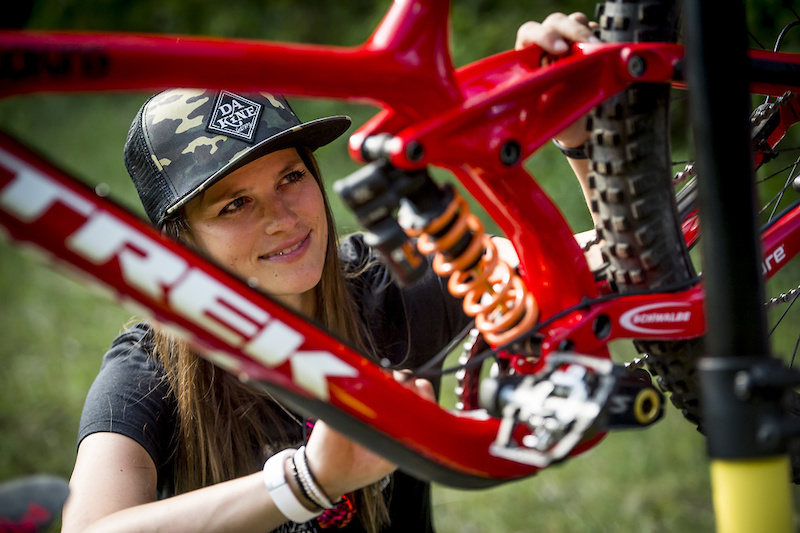 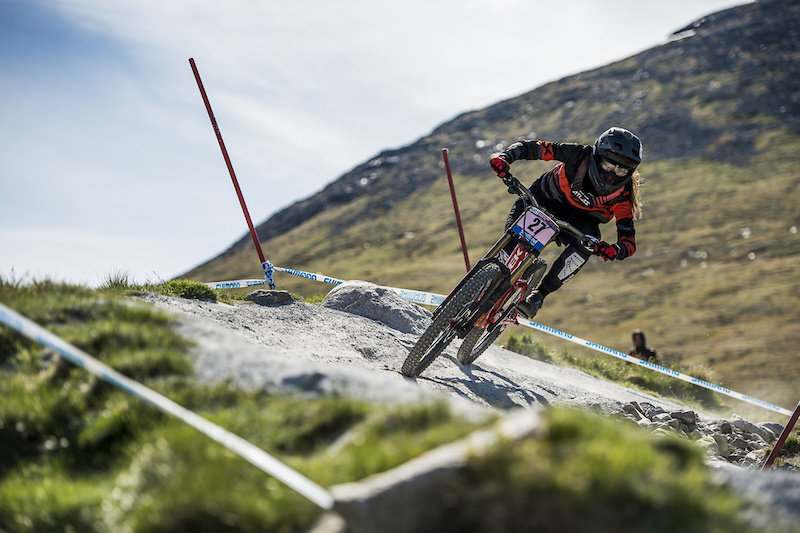 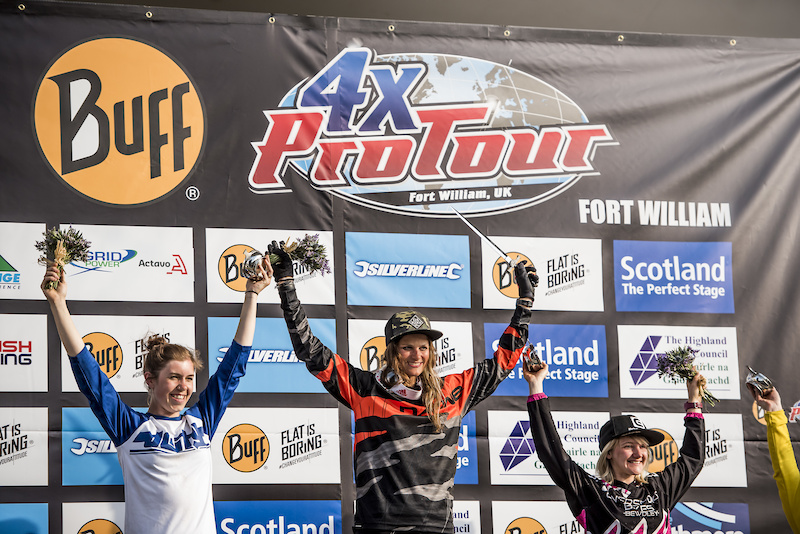 Racing Fort William World Cup in downhill and taking the win at the 4x ProTour.

The most epic days of the year were on our trip to Verbier. It was my first time to this area of Switzerland -- I was seriously blown away by its beauty and the incredible riding! The winner of my favorite camp of the past season is easy to choose.

After years of thinking about the idea and concept, I finally realized my first Airtime Camp in Leogang. Three days full of motivated women learning how to get more airtime under their wheels. It turned out to be a blast and a big success for everyone involved 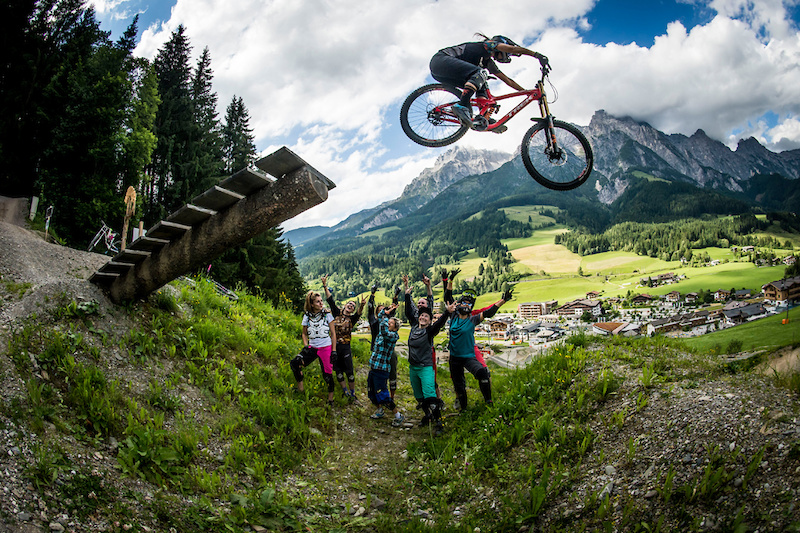 For 2017, I am planning two more Airtime Camps in Leogang and Verbier as well as a very exciting Bike and Art Retreat with my friend Micayla Gatto. I am also looking forward to all those great projects and riding trips that unfortunately I was forced to cancel last season after my injury. 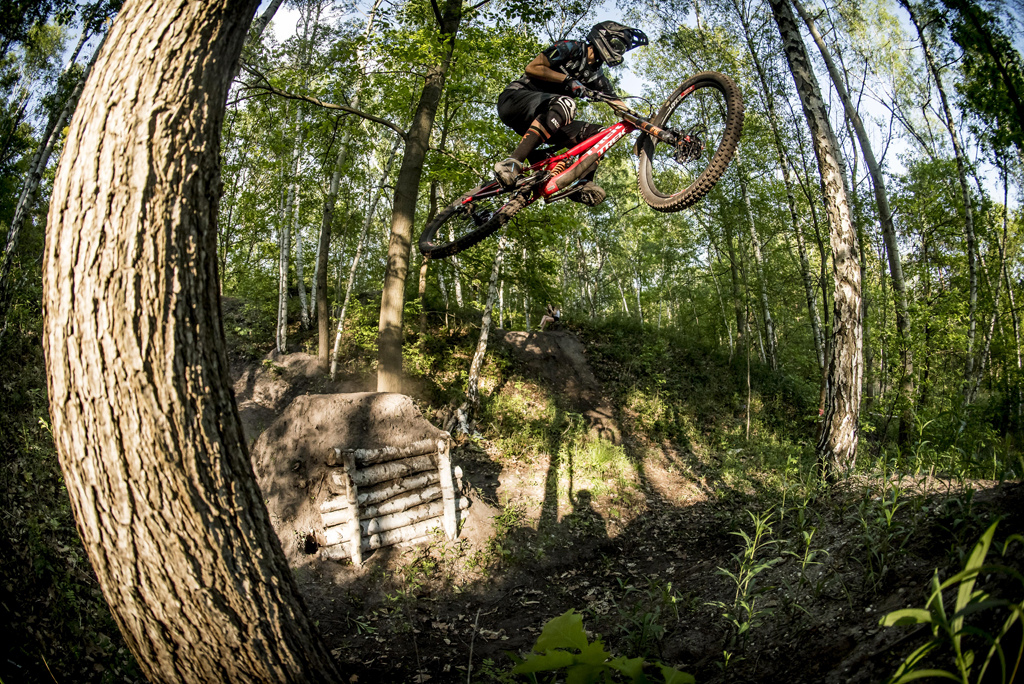 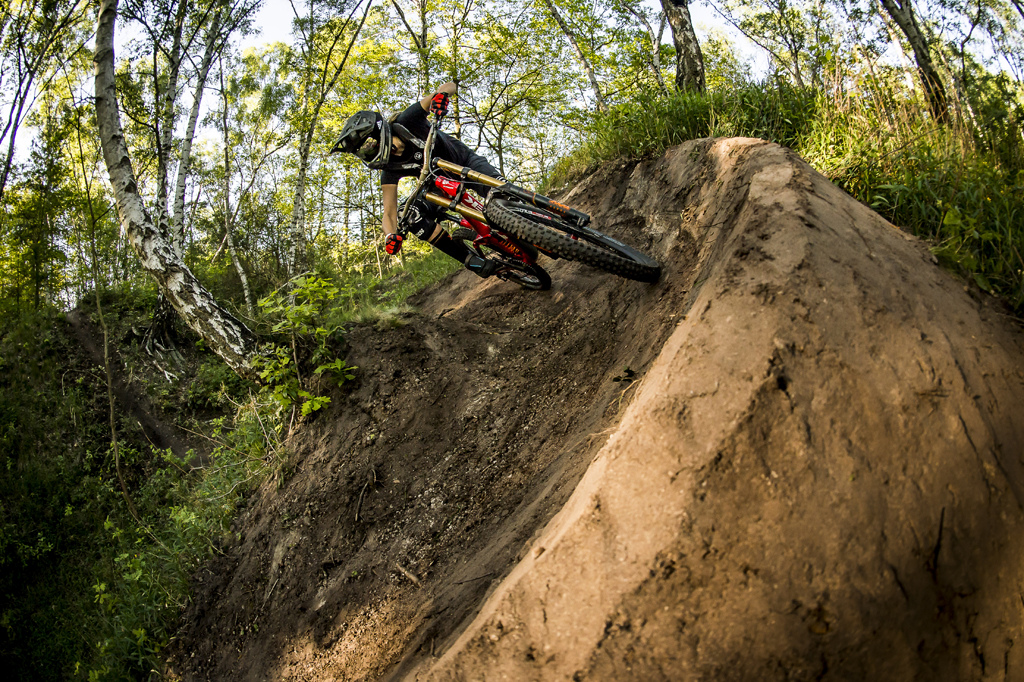 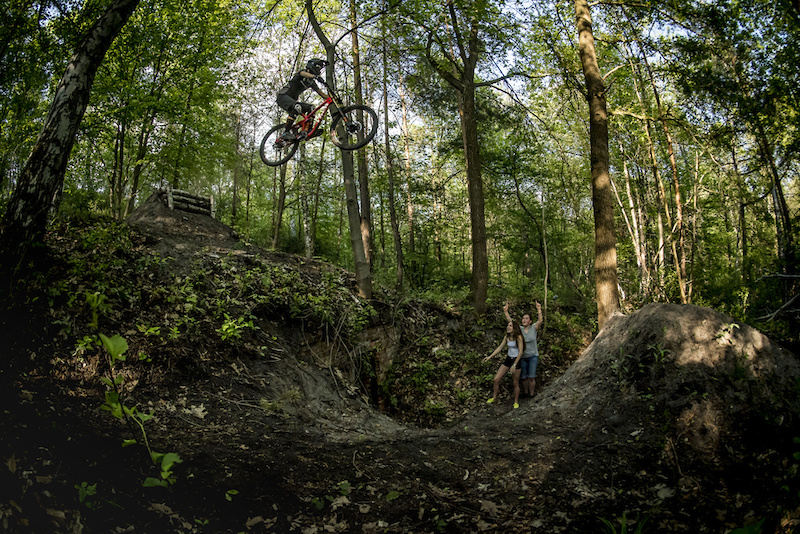 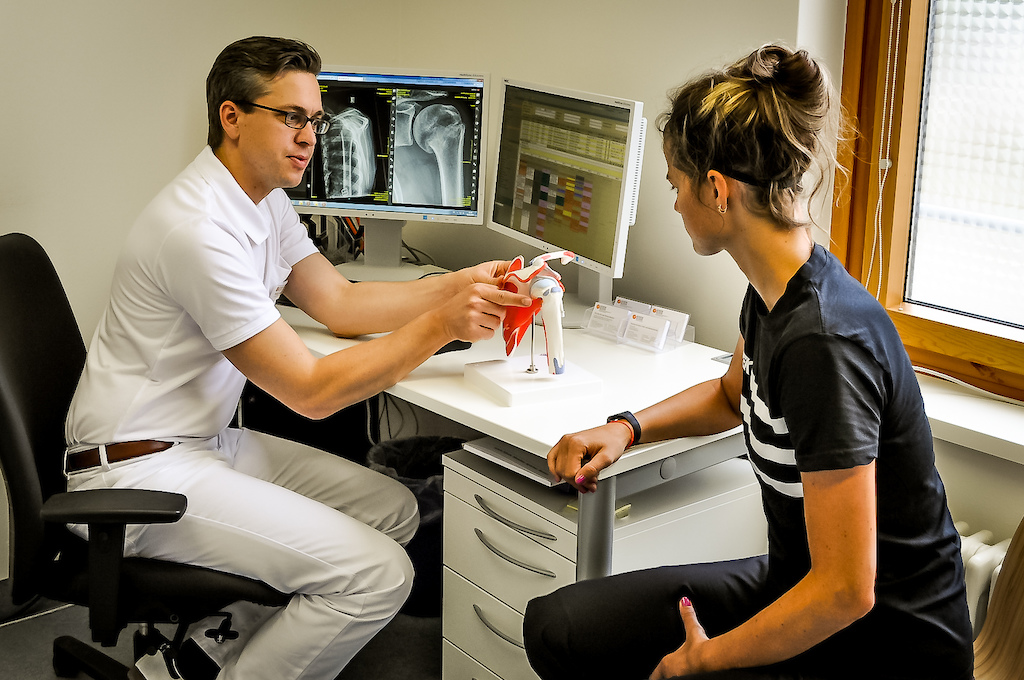 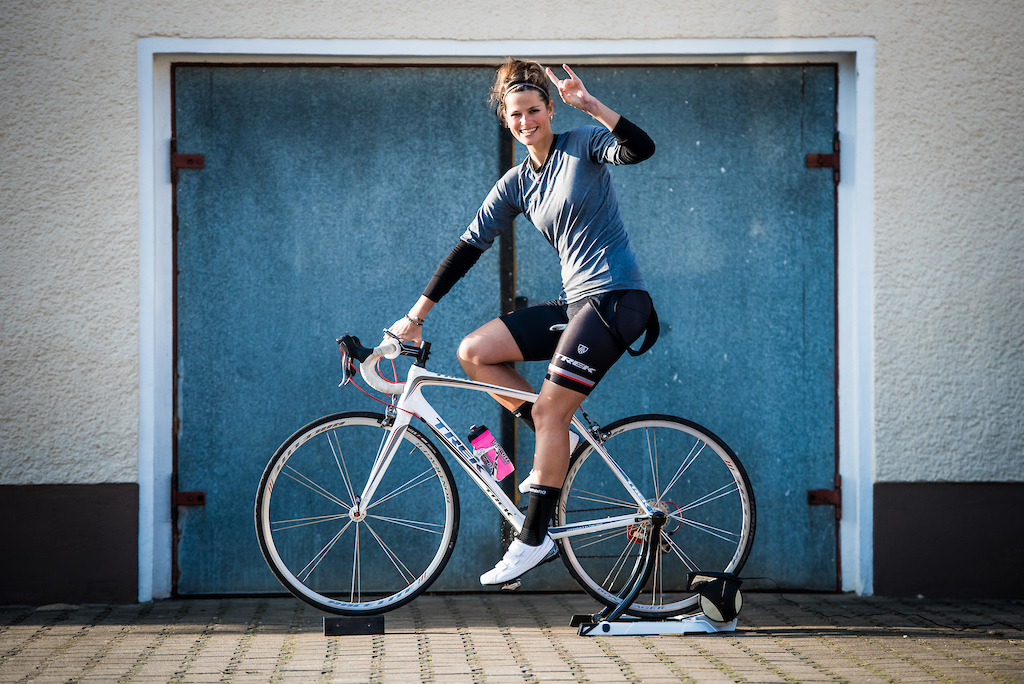 Sadly Steffi`s season was cut short in July of last Summer on this jump at the German 4X Nationals just before a planned trip to Crankworx Whistler. She suffered a huge crash which saw her arm broken in three places, also badly damaging her ulnar nerve. If you want to know more about the story and her tricky way back to recovery check out this story featured earlier in the year on Pinkbike.

Enjoying the beauty of Utah and getting behind the lens to shoot and report for German website MTBNews at Red Bull Rampage. 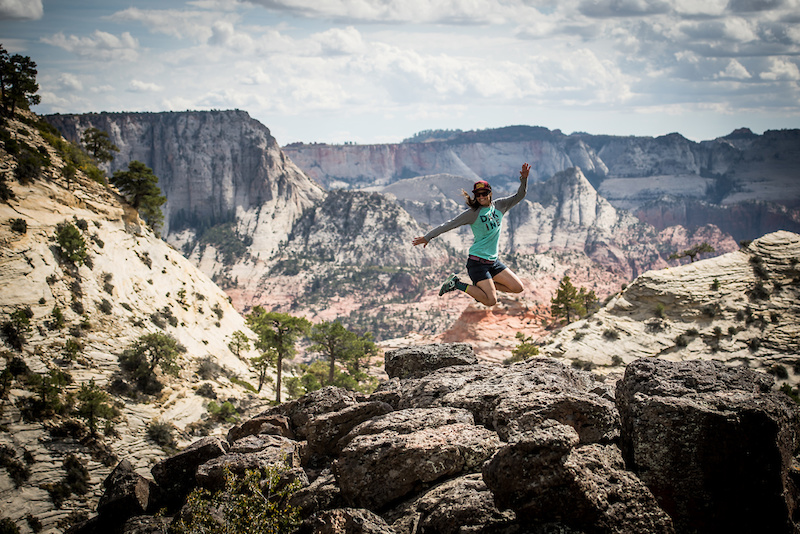 My nightmare now turns into a dream. I have been racing and riding for 20 years, but I have never been so excited to get on my bikes. Bring on the new bike season! 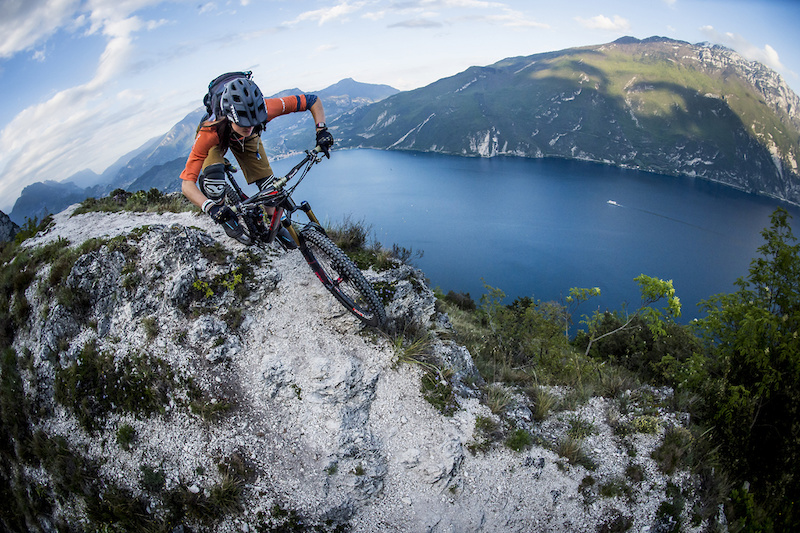 
A look back with Birgit, TGG's Austrian Enduro Racer: 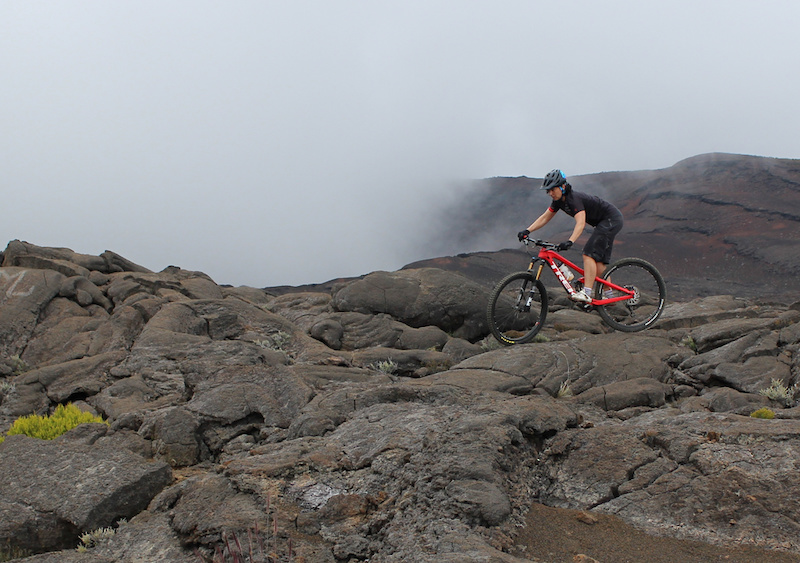 Trek Bike Attack in Lenzerheide, Switzerland has become another constant in my race schedule - this year was my fifth attendance since 2012! On the qualification run, a slightly modified track with more climbing than previous years, I was able to finish in first position, with a comfortable lead of more than 20 seconds. There were rumors Tracy Moseley would participate in the race on Sunday, coming over from Italy after finishing an Enduro stage. Rumors were right, and I had the chance to have a nice chat with Tracy before and after the race. The race seemed to start perfectly when entering the first fast rock section I was in first position, able to ride at considerably higher speed than the others (as Tracy just came over the night before, she must have had no possibilities for training and checking lines). Down and through the gallery I could go really fast, but suddenly in one of the successive high-speed sections, I must have hit a rock and flatted immediately. Stunned, I finally decided to stop beside a marshal a little further down and change my inner tube, realizing it still took at least 15 seconds for the following girls to pass. DNF for me, but Tracy Moseley could win the race. 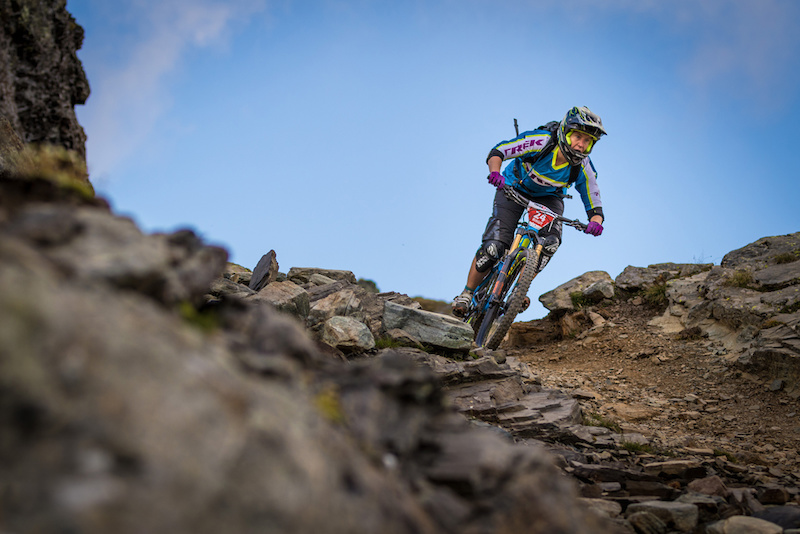 Another stop on my schedule was Val di Sole, Italy hosting the Downhill Masters World Championships 2016. It was my first time in Val di Sole, and the track walk on Wednesday evening revealed a really cool, old-school track that was extremely physically demanding with practically nowhere to rest the body or mind, as well as being long and difficult to memorize. It would take me until Friday afternoon to develop some feeling for the track, recognize sections and find something near race speed. Qualification on Saturday went fine as well as race day on Sunday – providing me with another Masters World's Gold Medal and a matching jersey. 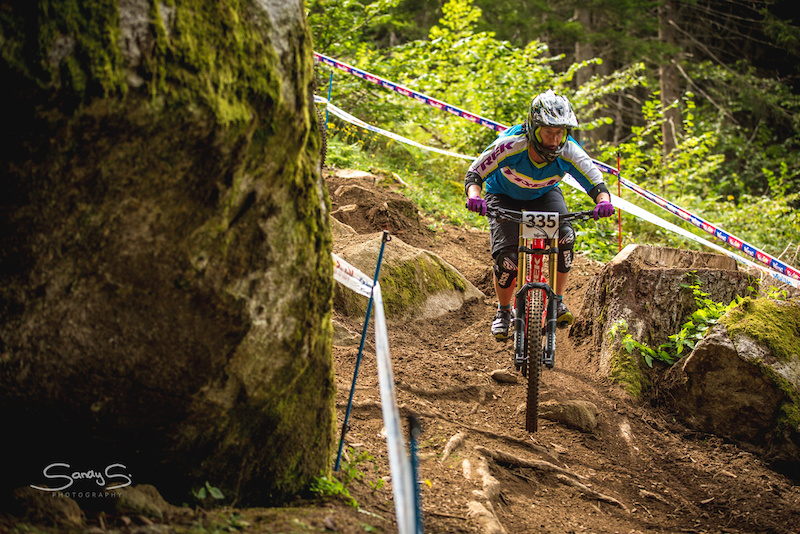 In September, Leogang hosted Austria’s first National Enduro Championships. With at least three other Downhill and Enduro experienced Austrian girls competing in the elite women category, it promised to become an interesting fight for the title. Like the years before, the beautiful autumn weather decided to change, the temperature dropped and it started to rain heavily on Saturday morning. On race day morning luckily it stopped raining, but the stages were still slippery. I made some small mistakes during my race runs, topped off with one crash that left me pushing my bike the remaining 100m to the stage’s finish line in my socks because of a lost shoe that was still clipped in. But, I had smashed it on the first stage, providing me with a big lead and securing my overall win. I was really happy winning the first ever Austrian Enduro title. 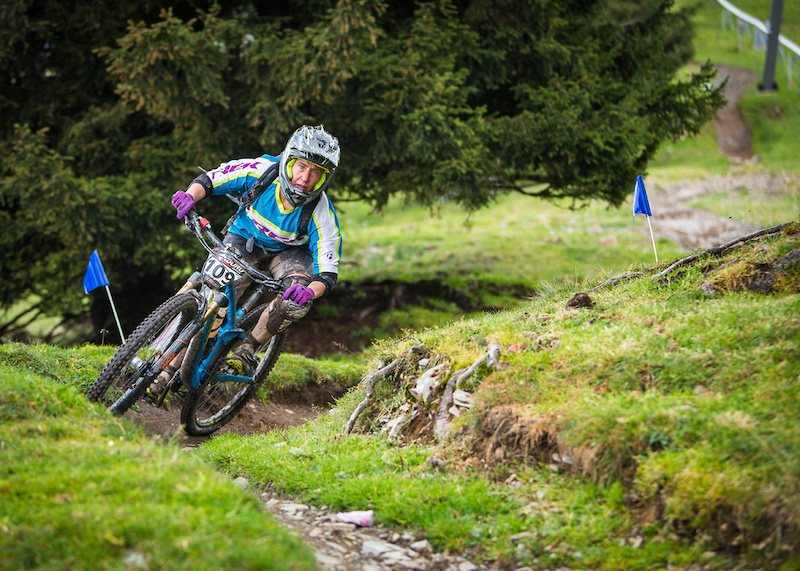 Thanks again to my TREK family and sponsors, hoping for another successful year, full of smiles, for me and my TGG teammates. I am especially looking forward to ripping trails with my red beast, the new Slash 9.9! 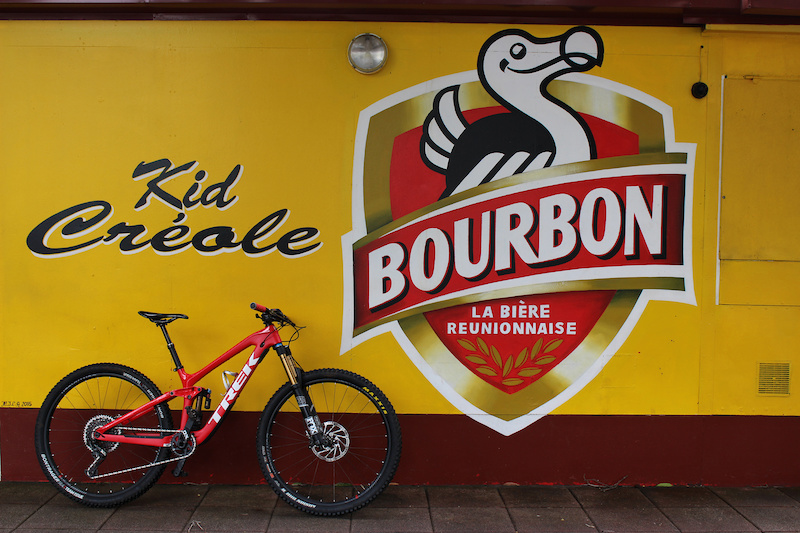 A look back with Kathi: TGG's Bavarian Freerider: 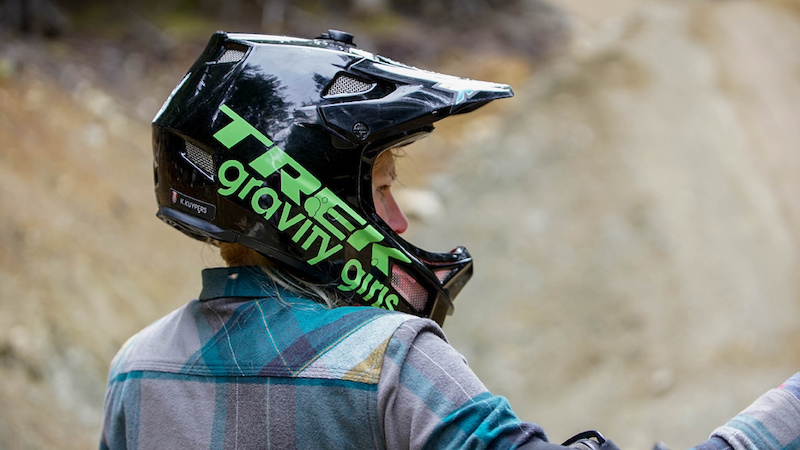 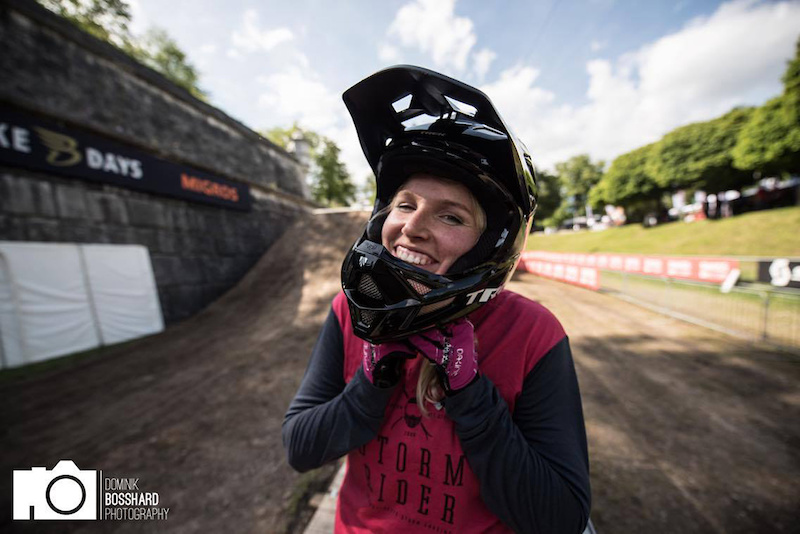 All smiles and sending it at Bikedays Solothurn on the Flying Metal Dirt Jump Line. 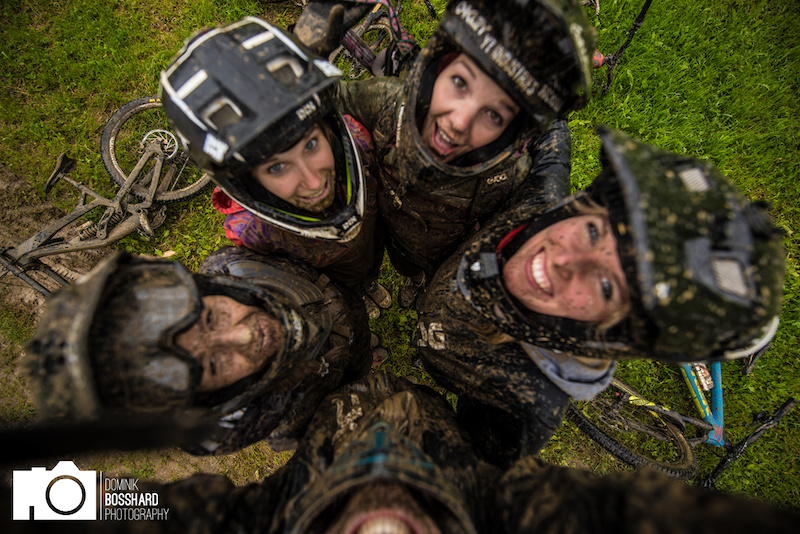 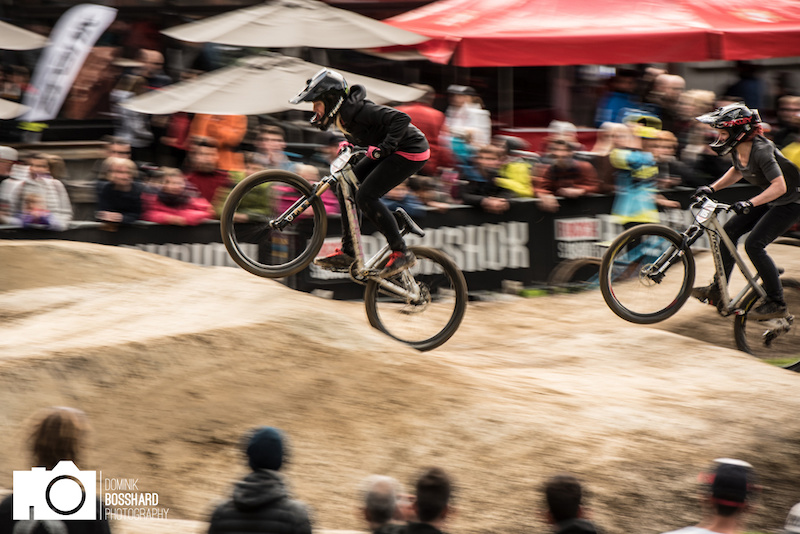 Pump track at Crankworkx Les Gets.

Exploring some hometrails in the Bavarian Alps.

Alpine Adventure together with Andrea Kohlndorfer for a photostory in the german bike magazine. 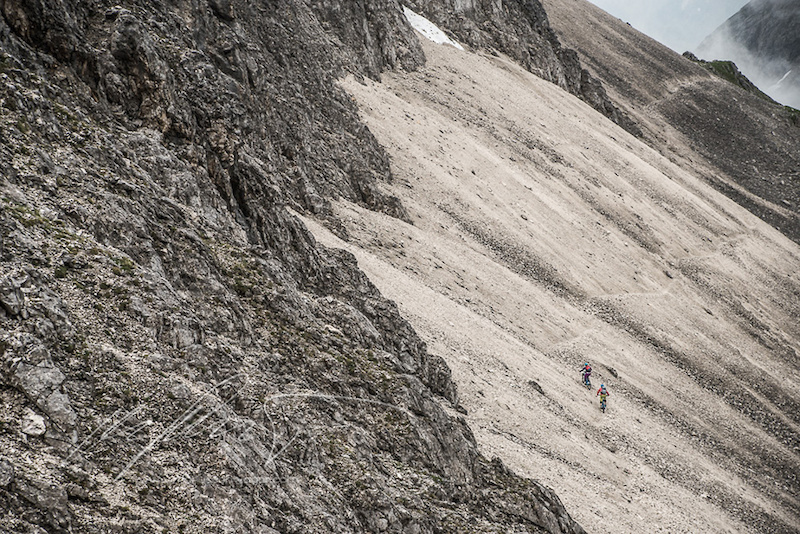 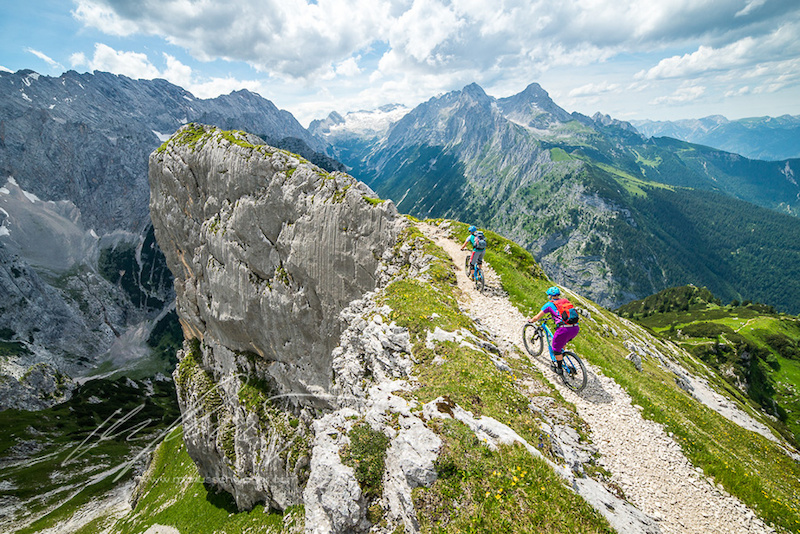 And because I saved up enough money, I competed at Crankworx Whistler. I took part in the Giant Dual Slalom, the Ultimate Rockshox Pumptrack Challenge and at Clif Bar Speed and Style.

But a real Canada journey wouldn’t be complete without exploring all its beauties. With my friends from Whistler Bike Co, I got to ride the best trails in the world and all the famous bike parks. Coastal Cruise at Coast Gravity Park was my favorite. Kamloops, some great singletrails and of course, the Chilcotins showed me why I love my bike so much.

We camped there for some days and even survived a grizzly chase. It was on the second day, on our way to the top of Ridge-O-Rama, when we came over the crest of a hill and Jake suddenly turned around, screamed "BEAR," jumped on his bike and rode away. Duke and Eddie did the same and when I looked up I saw this giant grizzly charging towards us. His fur was typically brown with the pronounced hump on his shoulders. I have never been more impressed and scared at the same time, but my flight instinct told me to jump back on my bike and escape. I felt crazy slow and my friends were already gone. In that moment I settled my affairs before death and felt really calm. I was just waiting for that one claw to slap me off my bike, but nothing happened. I got really lucky - I guess the grizzly didn’t like my smell. 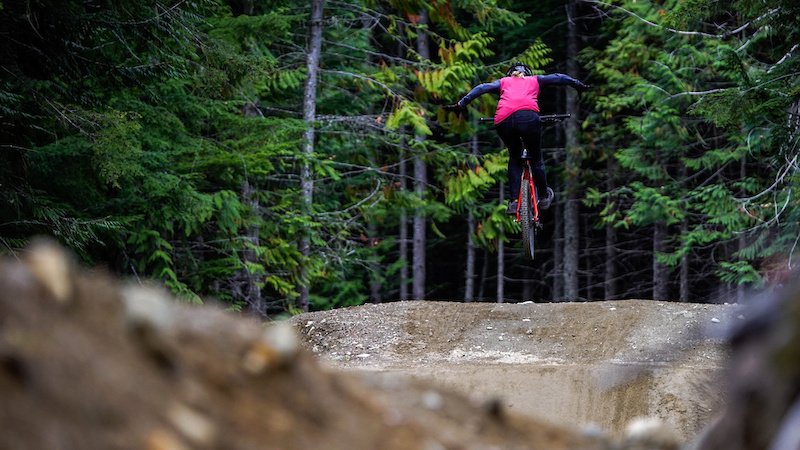 Having fun in the Whistler Bike Park. Look mum no hands.

For 2017 I will try to improve as much as I can on my bike and chase adventures - this is what I love the most.

Check out Pinkbike`s interview with me, here.


A look back with Katja, TGG's Swiss All-mountain Extraordinaire: 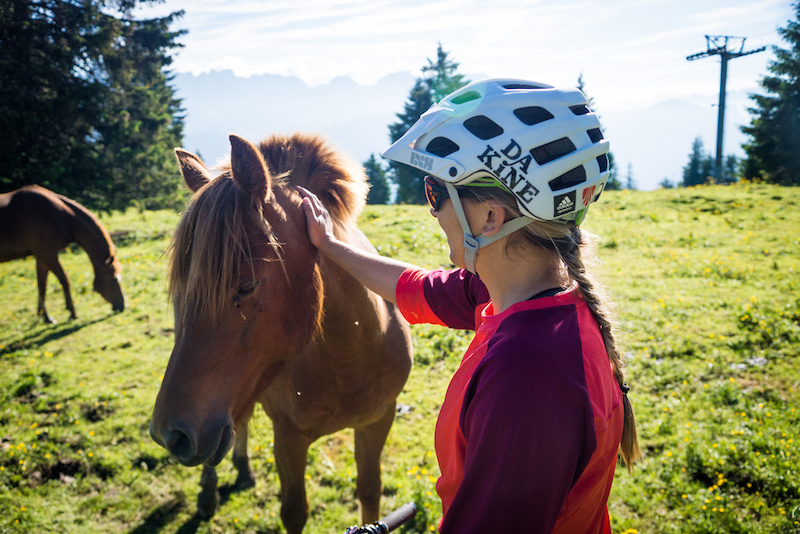 Besides working full time as marketing manager for her home resort Flumserberg, Katja just loves everything outdoors. It’s just awesome to see all her energy and passion.

Opening the first bike park trail at her home mountain Flumserberg together with René Wildhaber. When dreams come true. 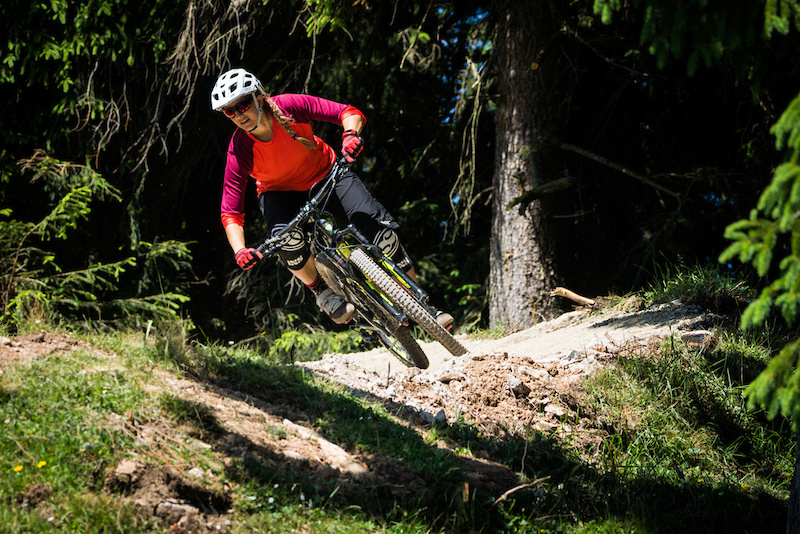 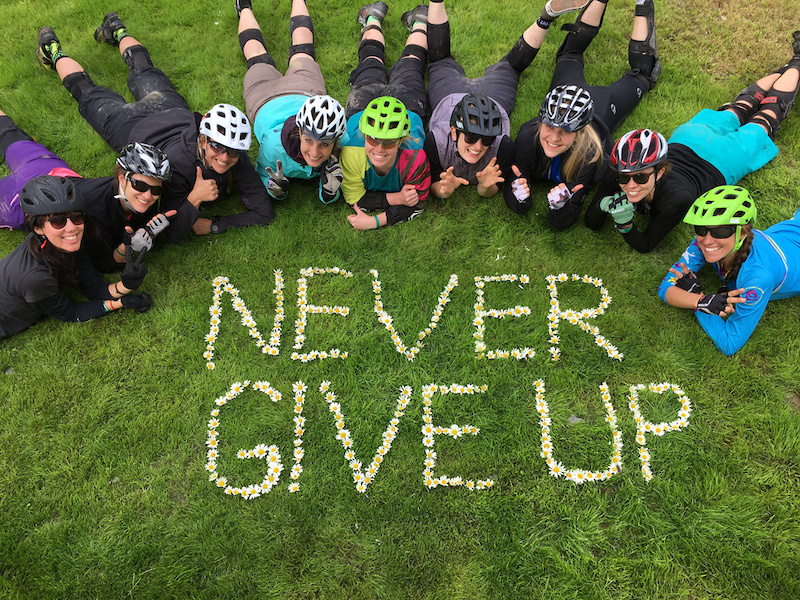 Not bad when your commute back from work looks like that.

Herman the sheep also made it to the Blue Salamander Trail just in time to enjoy the view. 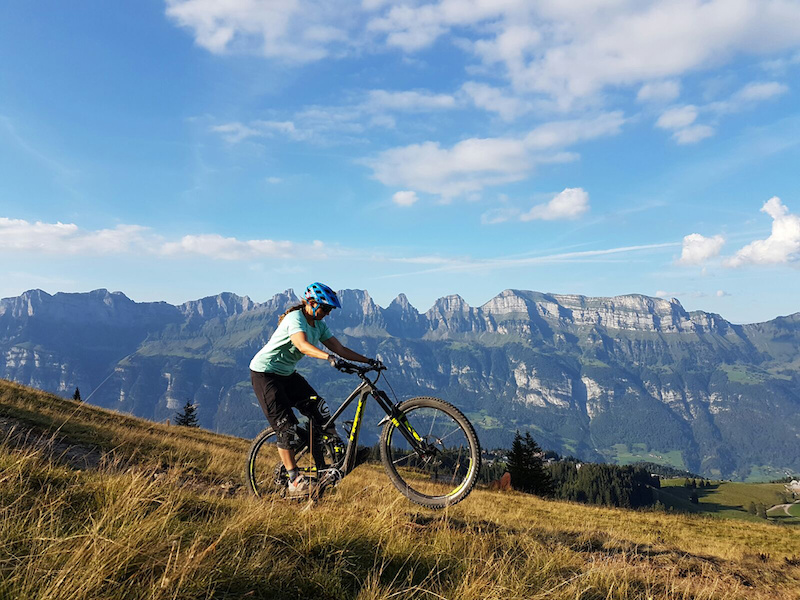 Wheelie time in front of the Churfirsten mountain range in Switzerland.

Last but not least I could explore Taiwan and Bali together with René on our well-earned vacation. Riding our road bikes in Taiwan, exploring jungle trails in Bali, surfing and some time on the beach the perfect way to relax and reload the batteries.

Those magic moments. Sunrise on top of a volcano.

Exploring Taiwan with the road bike.

Looks like some new mtb fans...checking out the hardware.

Last but not least a big thank you to our amazing team sponsors for making it possible - Trek Bicycle, Bontrager, Adidas Eyewear.

Fresno-composite-mtb (Mar 15, 2017 at 13:26)
So cool and that slash rsl is the coolest bike ever. These woman are so great I wish I could ride like them.
Below threshold threads are hidden