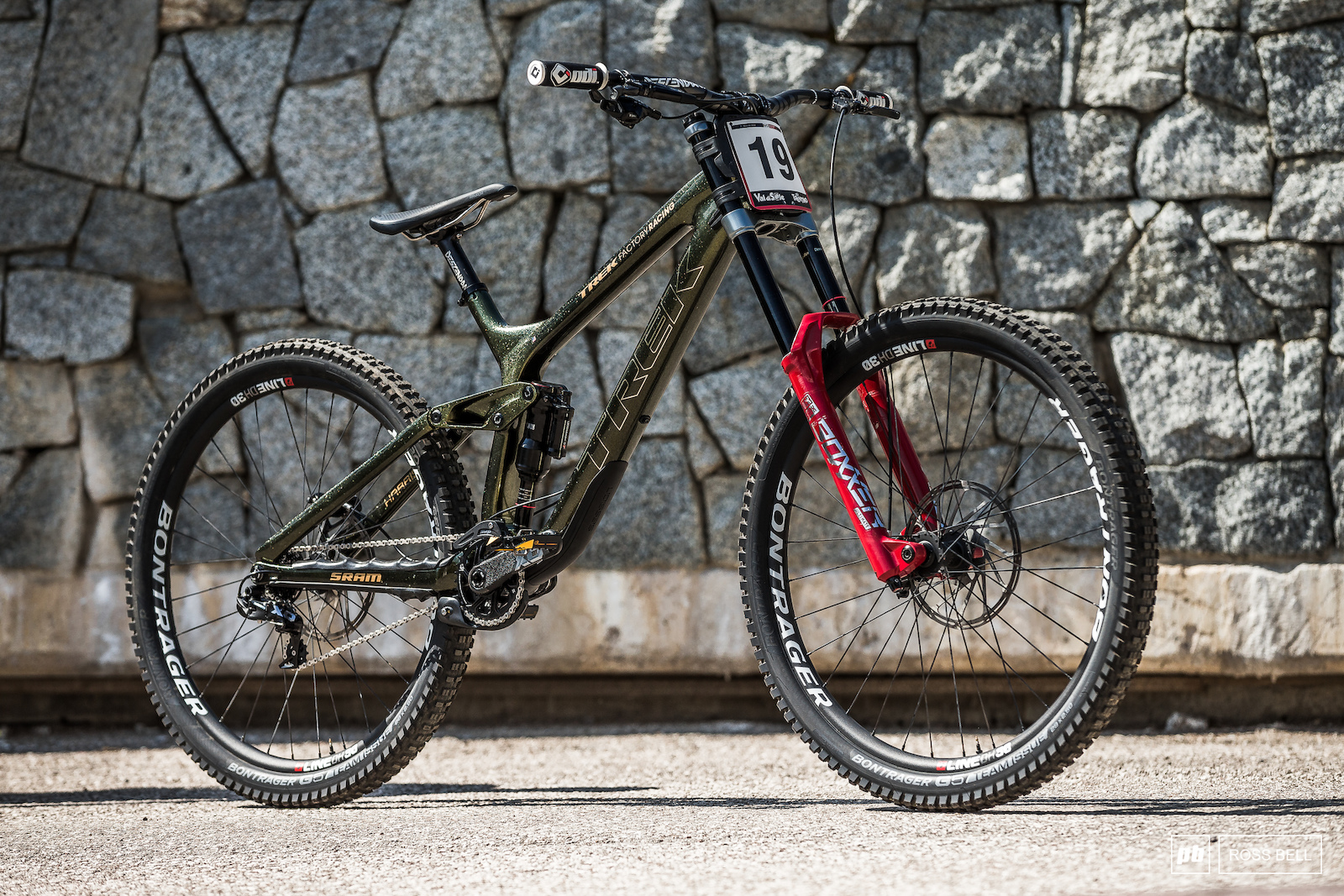 The sixth round of the season takes us to Val di Sole and the legendary 'Black Snake' track that's been keeping racers on their toes for a decade now. Pinkbike's Ross Bell caught up with Grant Sides, the guy turning the wrenches for Charlie Harrison on the Trek Factory Racing team, to see how Charlie sets his bike up for racing in the Valley of the Sun.

After some impressive results throughout the previous seasons while on Trek's Test Team program, American Charlie Harrison moved up to join the factory effort for 2019. The 6'1" Californian rides an extra-large Session 29er that's fitted with air-sprung suspension and a mix of aluminum and carbon components.

Like a lot of World Cup racers, Harrison has tweaked the fit of his extra-large frame slightly by installing an offset headset that gives him an extra 3mm of reach (now 464mm in the low setting) while also relaxing the bike's head angle by one degree.

The stock rig gets a 62.1-degree head angle in the slacker of the two settings, which means that Harrison's Session is hovering somewhere around a chopper-like 61-degrees, otherwise known as slack as hell. 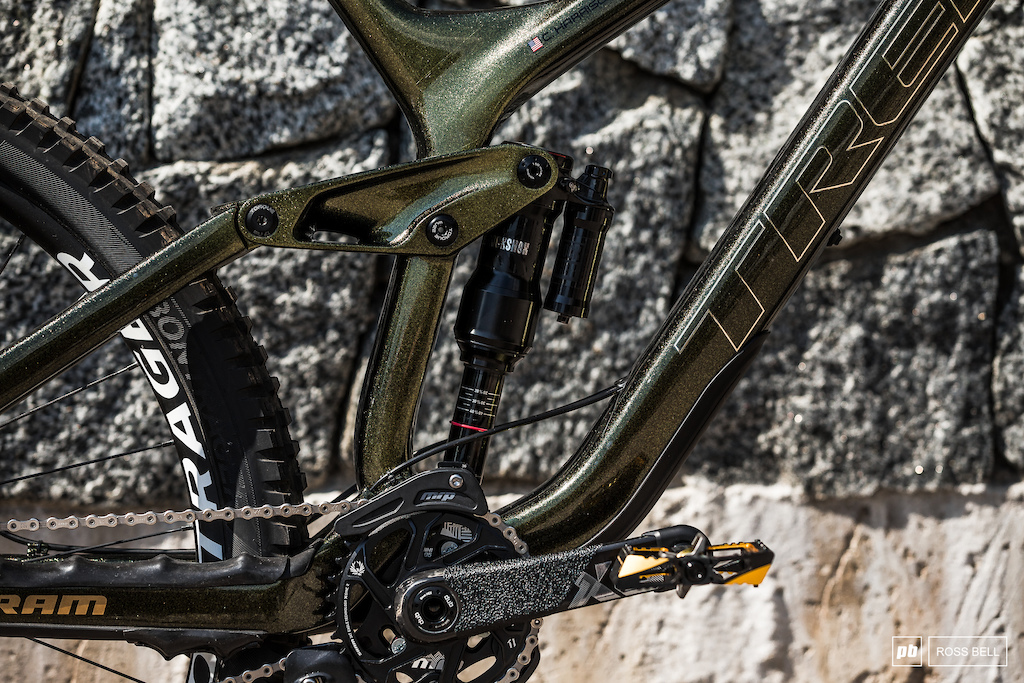 That'd probably rattle our teeth out by the time you or I got halfway down the mountain, but it works well for 174lb Harrison.

It's the same story out back, too, with 243psi in his 'Meg-Neg' air can that's said to provide more suppleness at the top of the stroke. Volume spacers? Yeah, all of them, please. You'll find five and a half inside his BoXXer World Cup, which Sides said is the maximum amount, and three in his shock. So, firm suspension with plenty of ramp-up that a guy like Charlie would need, but the extra-large negative air can is on the job to keep things as active as possible. 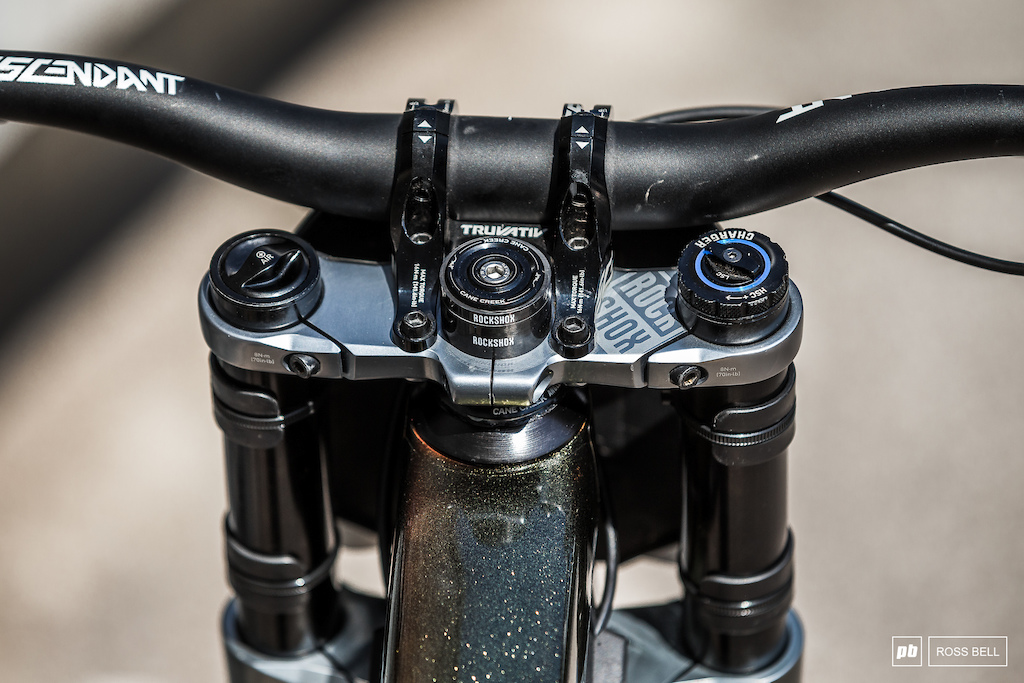 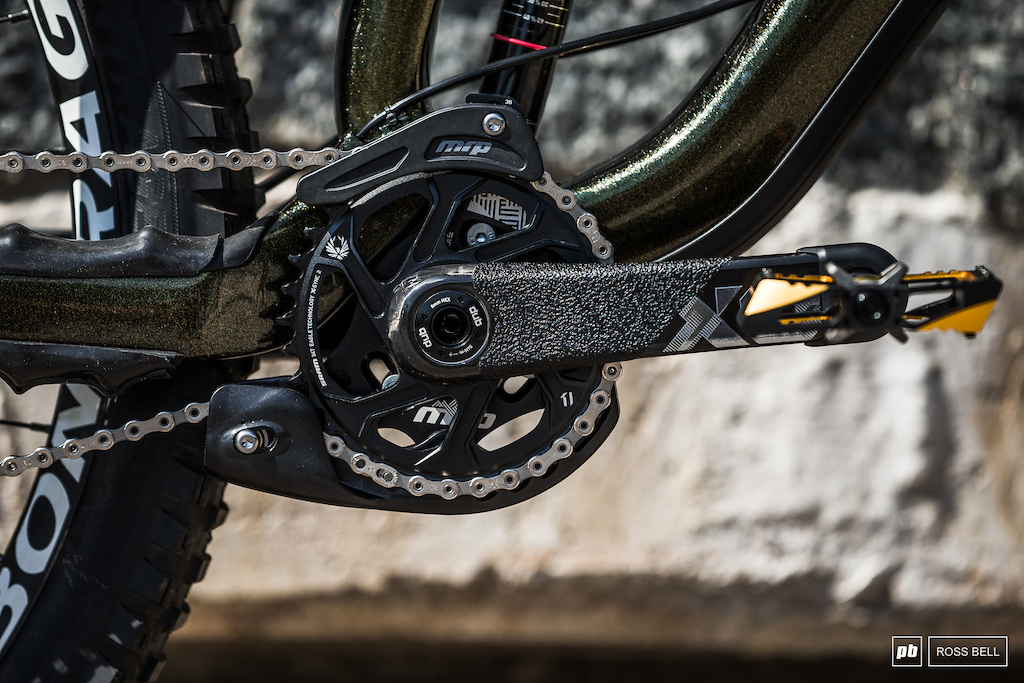 You'll find aluminum cockpit parts and rims on Charlie's Session, but he is running a set of carbon cranks with grip tape applied to the outer faces.

He's also a convert from coil springs, Sides told PB's Ross Bell in the Val di Sole pits: ''No coil shock for Charlie. He found air and really likes it. He came to team camp on a coil and that's where we really dialed in his air settings.'' And when Sides says "dialed in," that's exactly what he means - he's only changed his air pressures by +/- 3psi since that off-season team camp. The man knows what he likes, it seems.

That same approach is applied to his cockpit as well, with Charlie preferring to not mess with his handlebar height, regardless of the track's grade. He's running an aluminum Descendent handlebar with 25mm of rise and 790mm of width, and there's also a 50mm direct mount stem. 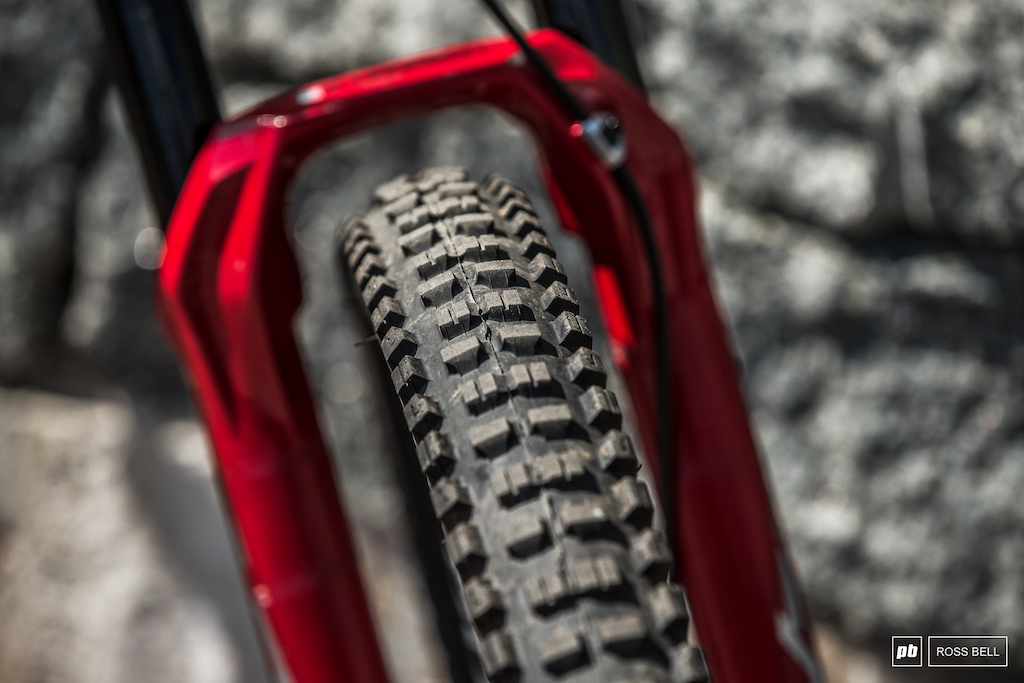 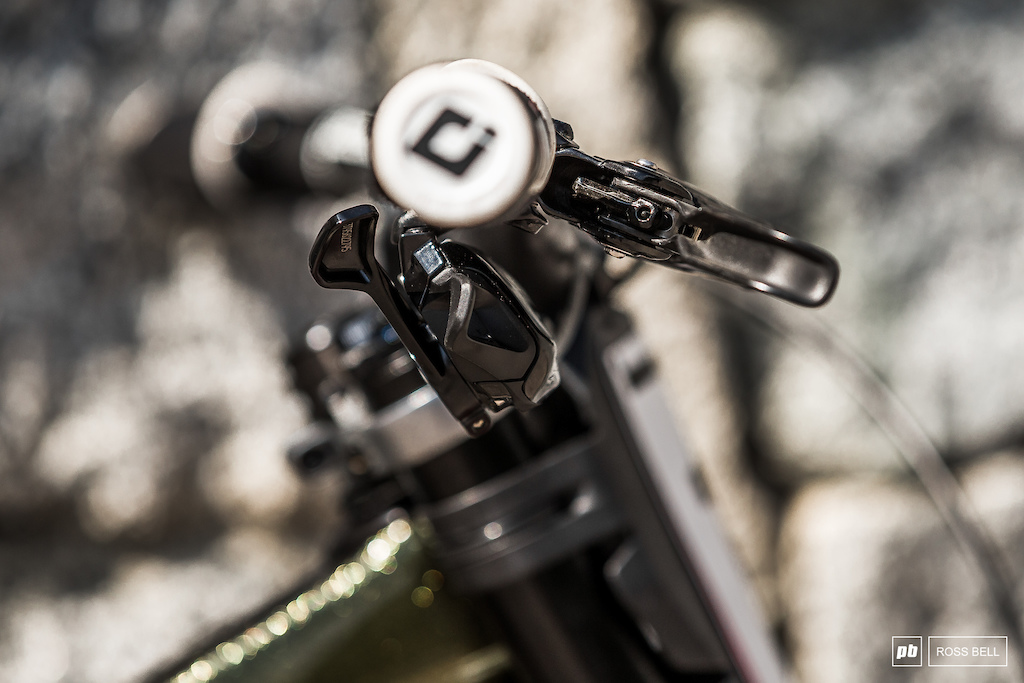 Bontrager G5 DH tires (left) front and back and no inserts. Charlie likes his brake levers (right) to rest a 67mm out, and the bite point to happen at 57mm out.

Quick question for you: Can you tell me how many millimeters out you like your brake levers? What about the exact measurement where they start to bite? Me neither, but Charlie can. He runs his levers out to 65mm, and the bite point is at 57mm. While that sounds maybe just a touch picky, Sides said that's not the case at all: "He's pretty neutral about most things. As long as you have his brakes working well and his suspension running firm, he's good to go otherwise.''

Wheels and rubber are Bontrager, of course, with a set of G5 DH casing tires that are mounted to aluminum rims at 27 and 29psi. The team can run Cush Core if they want, depending on the track, but it wasn't installed on Harrison's bike for Val di Sole.

SonofBovril (Aug 2, 2019 at 1:01)
I agree with @hifiandmtb, While I can't discount Charlie's ability or preferences at all, I'm just an armchair racer, but I do suspect that if he did like Greenland and started to allow the bike to do more of the work for him, he might be able to find some more speed, and that's the name of this game isn't it?

chris (Aug 1, 2019 at 15:46)
"Quick question for you: Can you tell me how many millimeters out you like your brake levers? What about the exact measurement where they start to bike?"

I think you meant "Bite"

nigelnobrakes (Aug 1, 2019 at 20:32)
@mikelevy: If they were XT's he could use his screw driver to adjust the bite point just perfectly right

mountainyj (Aug 1, 2019 at 18:42)
Funny that the brake lever measurement comes across as nit picky. I feel like that’s one of the first things you feel and notice about a cockpit. I’d personally get along great with Charlie’s setup for brakes. All my bikes are setup approximately 65mm also, slight variance depending on brake lever shape (hope vs shimano) and try to keep bite around 40mm.
First thing I noticed getting on a friends bike. Levers at about 45mm and bite at 10mm, he loves the super close to bar feel. Brakes, bar roll, and grip diameter are some of the most personal parts about a bike.

nojzilla (Aug 2, 2019 at 0:52)
@tobiusmaximum: maybe they just haven't tried it or prefer they're brakes further out. Personal preference. Simple experiment though, stick your brake finger out far reach and then closer to a fist and feel the tension as you move in a braking action, in the muscle on the top of your fore arm. I (personally) get less tension the closer my finger is to a fist an that helps me to brake an control, grip with a more relaxed fore arm
Another reason is you need good/tune'a'ble brakes to work close to the bar with a short modulation, could be another reason?

Pavel-Repak (Aug 2, 2019 at 0:56)
@tobiusmaximum: Brake setup depends most on preference. I have my guide R's out about 74mm (3 clicks from farthest setting) and they feel nice. I would like to bring the bite point closer to the var though.

tobiusmaximum (Aug 2, 2019 at 1:06)
@Pavel-Repak: everything regarding set up depends on preference

Braench (Aug 2, 2019 at 1:30)
@tobiusmaximum: yep, it really depends on your hand size and everything else...is you bar setup right, is your bike the right length, is you stem the right size and much more.
For some people it does the Trick.
Personally i have big hands and i also prefer them a little further out..

RadekHart (Aug 2, 2019 at 2:53)
I absolutely love Trek's paint jobs, there is no other company providing this kind of stuff. RockShox paint jobs are a different story though.

sngltrkmnd (Aug 1, 2019 at 17:39)
I was under the impression that Line DH 30s were carbon, but this post indicates they're alloy. @mikelevy have I been misled all along? In any event nice to see 32H F/R, and I wouldn't change a damn thing on that whip.

kleinblake (Aug 1, 2019 at 20:46)
When cornering fast, riders will take their outside foot off the pedal and stand on the crank to get more lean and weight the side knobs better. I’m surprised you haven’t heard of this

jorgeposada (Aug 1, 2019 at 23:05)
It's actually a moto trick as far as stance in a sweeping turn. Again looking to the big dogs for high speed solutions.

mybaben (Aug 2, 2019 at 9:42)
Such a great example of why it's pointless to ask how the pro's are setting up their suspension. If us mere mortals tried to ride that setup, we wouldn't get halfway down the mountain without dying! LOL.

jorgeposada (Aug 1, 2019 at 15:38)
Great to see him back and on a fresh rig. Surprised his front end looks low while others are jacking theirs up.

mobil1syn (Aug 1, 2019 at 15:56)
can someone explain to a hack like myself what is meant by bite point? everyone on the internet seems to complain about inconsistent bite point with all the brakes.

On long/steep descents, most brakes' bite point and overall feel/modulation will change a bit.

mitochris (Aug 1, 2019 at 23:42)
@nvranka: this can’t be true. Must be first contact point, no? How would you measure max braking power? Locked wheels? That differs on tires, surface, weight etc.

ErnestFrigelj (Aug 2, 2019 at 1:00)
@mitochris: ye max braking power can be measured only in lab......bite point is first contact of pads with rotors

telephunke (Aug 3, 2019 at 1:49)
who makes those chainstay / chainslap protectors? have seen them on a few bikes lately

No, it means it's slack as AF.

NickBosshard (Aug 2, 2019 at 2:43)
It's not really griptape, it's more like truck bed liner and as far as I know just to have a more durable surface finish and a little impact protection. It's nothing custom, it's a standard feature on the new X01 DH cranks.

DH-Angel (Aug 1, 2019 at 15:40)
29ers are a terrible idea. The reason behind the industry to develop 29 wheels was to increase sales but without any real benefit.

fenderdude345 (Aug 1, 2019 at 15:43)
Ya it's not like every pro is slowly switching over to them because theyre faster and better or anything like that

JaToledo (Aug 1, 2019 at 15:53)
What are your arguments? And if so, why wouldn't the industry make something that actually benfits riders and sell that? People would notice it's better and buy that instead of 29ers...

Pavel-Repak (Aug 2, 2019 at 1:00)
A team of engineers were trying to find a way to make bikes better and they found they could do it by increasing wheel size. Behind every product that's only meant to get your money and ruin your life is a team of hard working engineers trying to make a better product.

muyguapa (Aug 2, 2019 at 3:17)
@Pavel-Repak: A company was trying to find a way to make more money and they found they could do it by increasing wheel size. Behind every product that's only meant to get your money and ruin your life is a team of people trying to make... Money.

Pavel-Repak (Aug 2, 2019 at 3:49)
@muyguapa: Can you imagine how advanced humanity would be if we were all opposed to every new idea? We'd be slightly more advanced than cavemen. I'd love to see you tell that face to face to the engineering team at just about every bike company. I for one love my 29er.

muyguapa (Aug 2, 2019 at 7:40)
@Pavel-Repak: Don't get me wrong, I have no problems with actual innovation. It's change for the sake of change(that's prevalent in the MTB industry) that I have a problem with. I do happen to know and ride with a designer with a MTB component manufacturer and guess what we both bitch about when we're discussing the MTB industry in general?