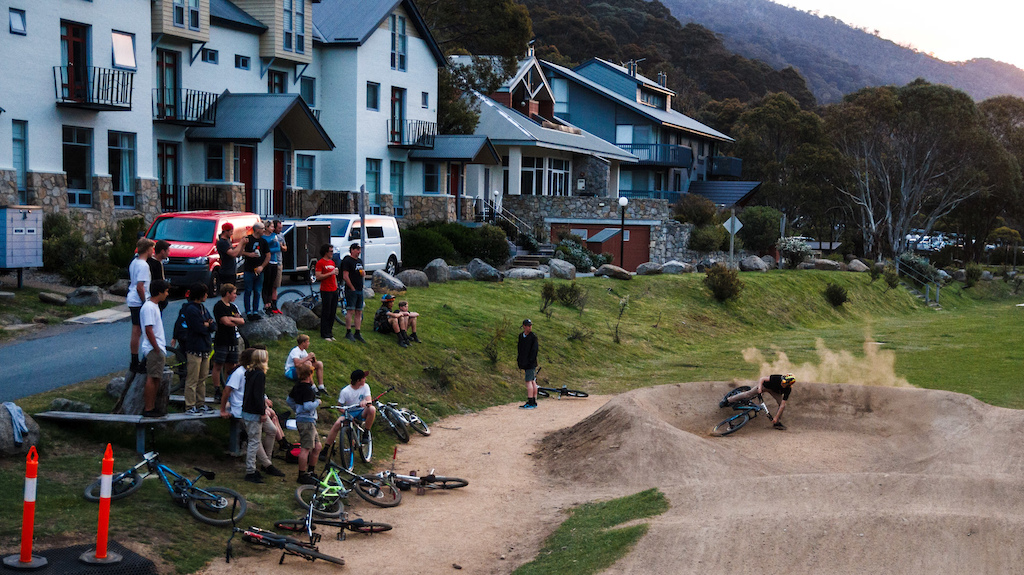 With the sun setting on Sunday after 2016 Thredbo Cannonball Festival had wrapped up, a bunch of young riders met up and made up a little challenge on the Village Pumptrack. The Pumptrack which had hosted the Pump Track Challenge on Thursday night, consisted of four tight berms and a set of rollers in the middle. With tubeless tyres fitted on their downhill and enduro bikes and one lone BMX bike running tubes, the challenge was to see who could roll the tyre off the rim through cornering speed the first. The prize? Nothing but the admiration of the mates throwing down. 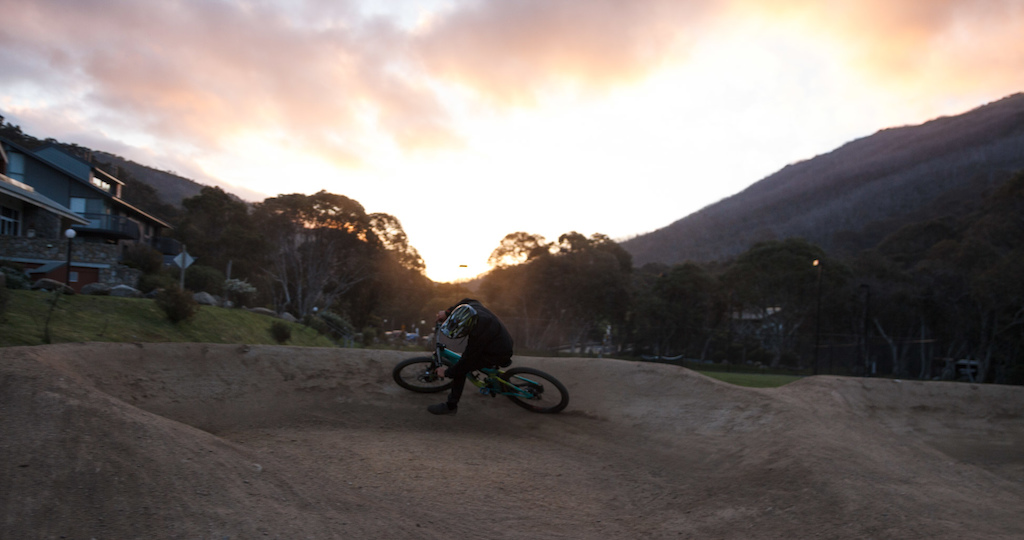 Alex Unicomb pushing thru the berm as the sun sets over Thredbo.
Patrick Butler, fresh from riding in the U19 class of the Australian Open Downhill that day looked to be generating the highest amount of potential to rip the tyre off his Santa Cruz Bronson's rims. Alex Unicomb was also looking in touch along with Sam Hardman borrowing his bike for a few runs. 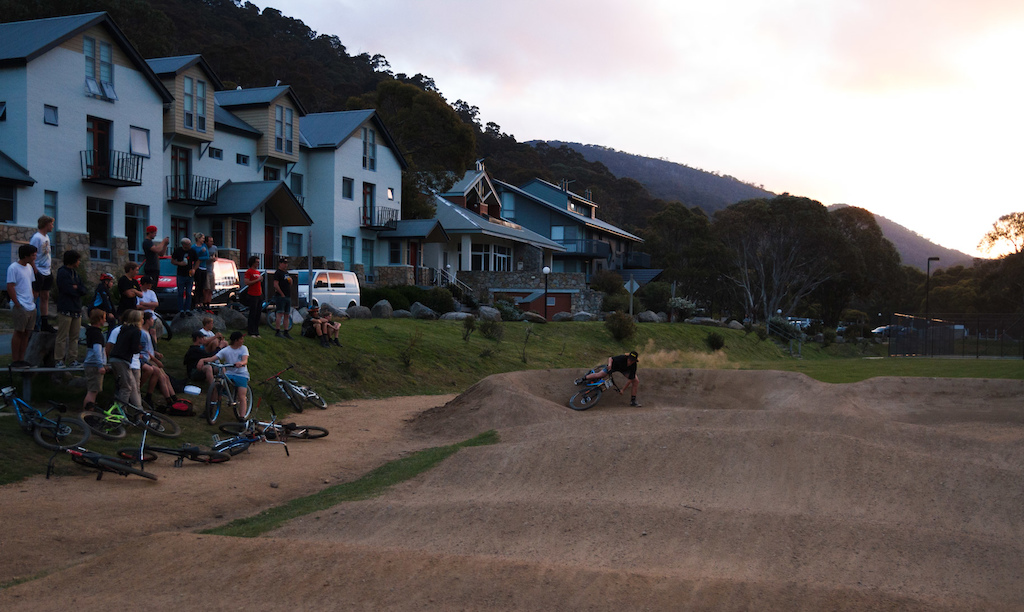 Sam Hardman throwing down.
The whole crew was just chilling back after a top weekend at Cannonball and egging each other on to go that little bit further to burp the tyre. Wide rims and tubeless beads weren't really helping but there was still a good amount of sealant being ejected from the tyres! Things got more interesting when Troy Brosnan, staying in the house with the SRAM Australia guys, came out. He'd been watching as he was packing up and thought he would shake things up. 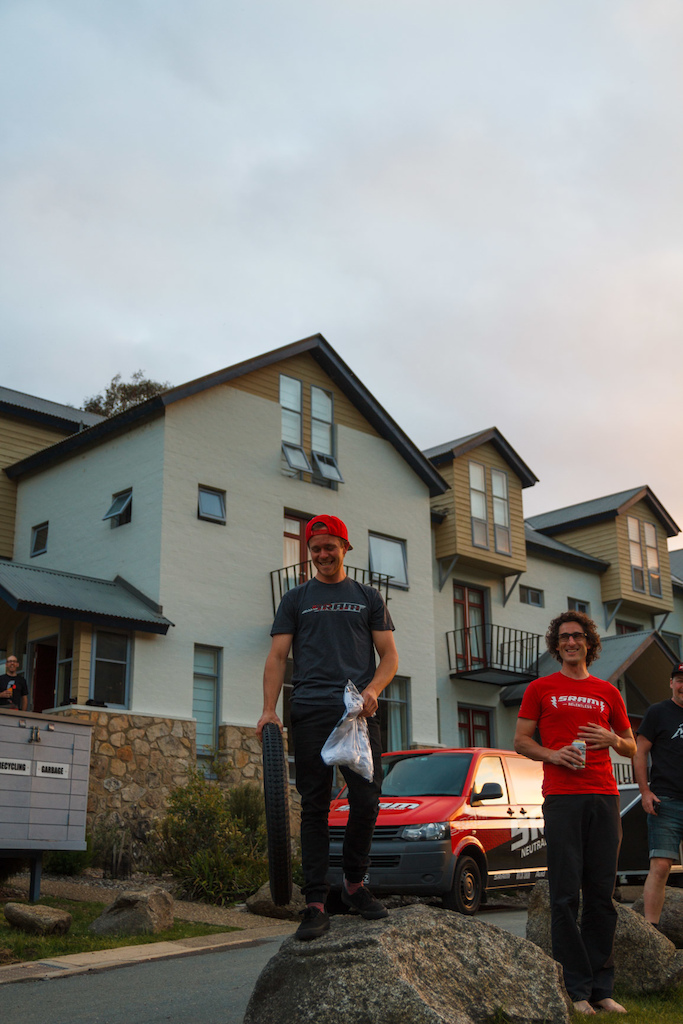 Troy offering the prize.
Troy announced to the crowd that the first to unseat the tyre would win a free tyre and a signed race jersey. To which the crowd went wild and took the stoke factor up to 11! 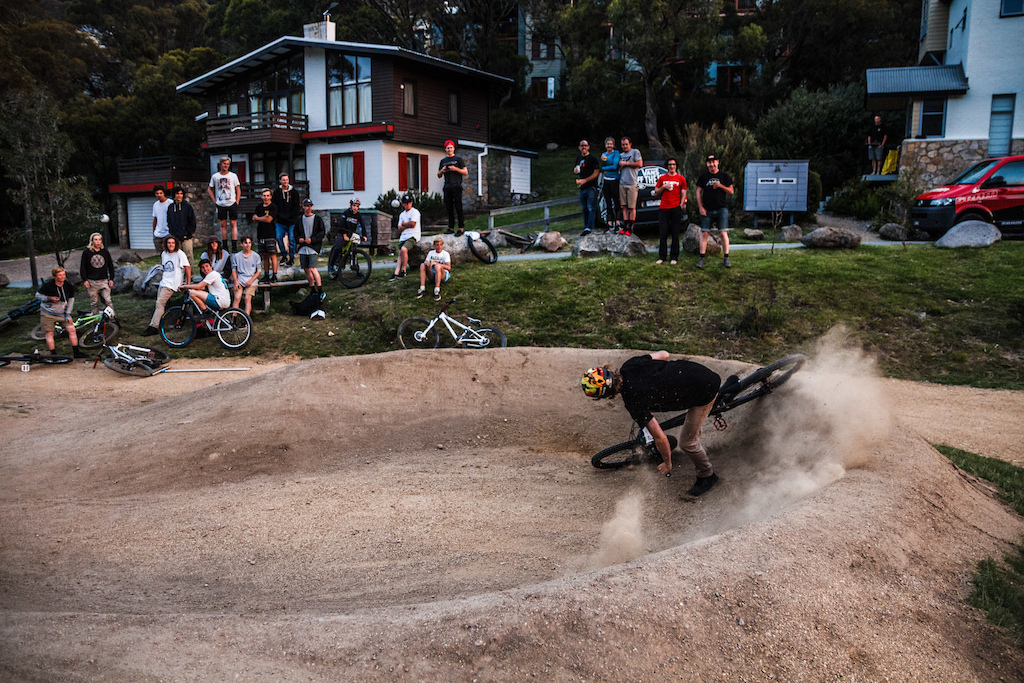 Plenty of roost.
With the challenge now getting more official, one of the SRAM team took it upon himself to adjudicate and ensure that the tyres at least had some pressure. Opinions varied wildly among the crowd on what the cutoff should be - was it 5PSI, 10PSI, no pressure at all? A floor pump was placed at the start ramp to pump up any flat tyres and the carnage began again with more gusto. Troy got straight onto Instagramming the experience of all the boys throwing down. 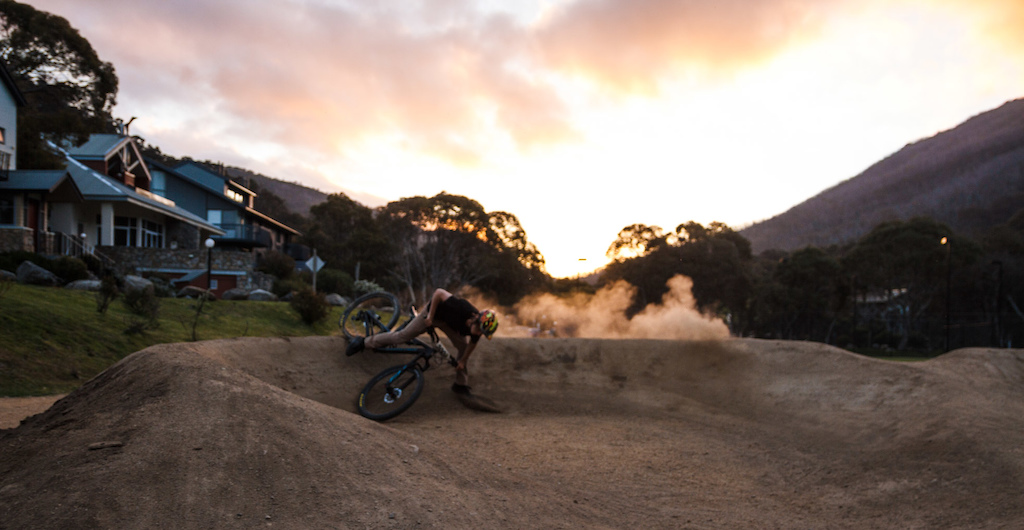 Pat's style was all out.
After a few runs Pat, after a little bit of manually unseating the bead at the top of the start ramp managed to finally throw the bead off the tyre and the contest was won. 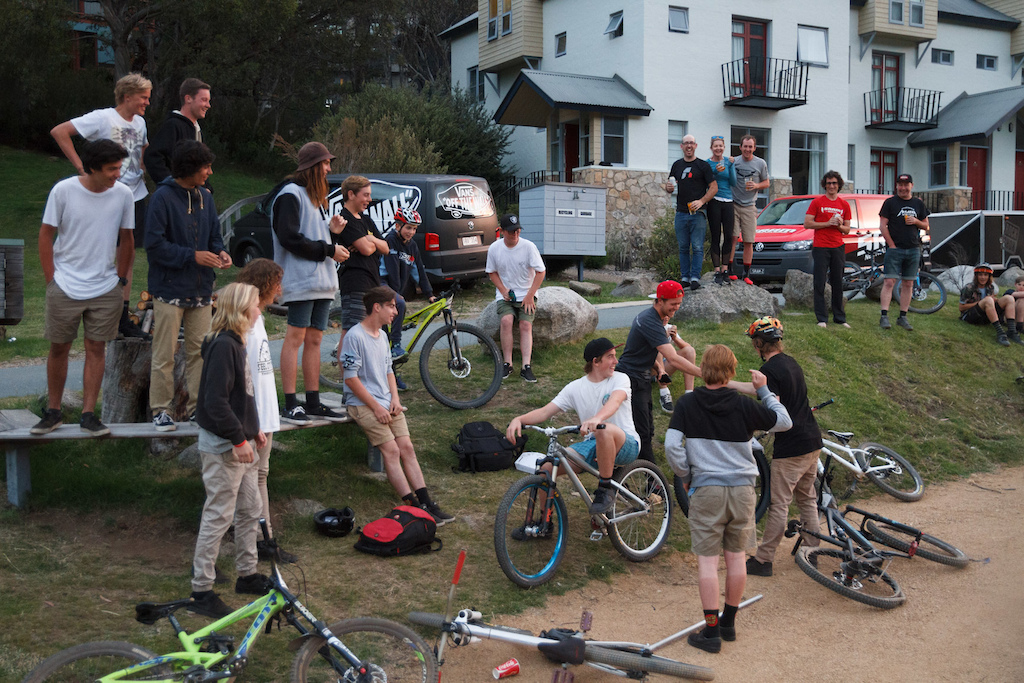 Troy walks down to congratulate the winner. 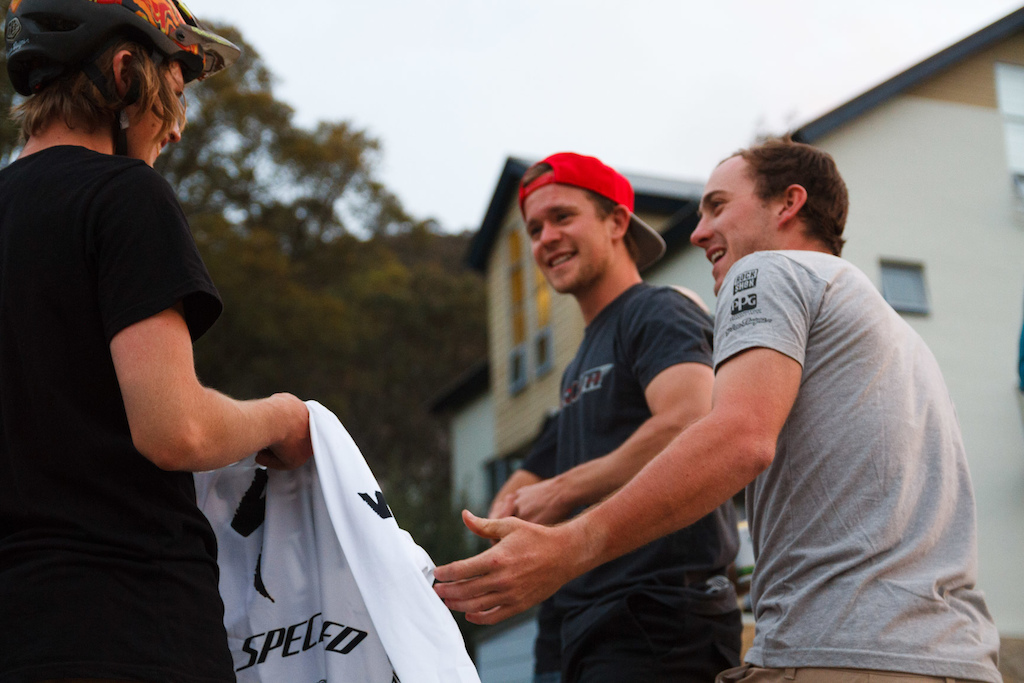 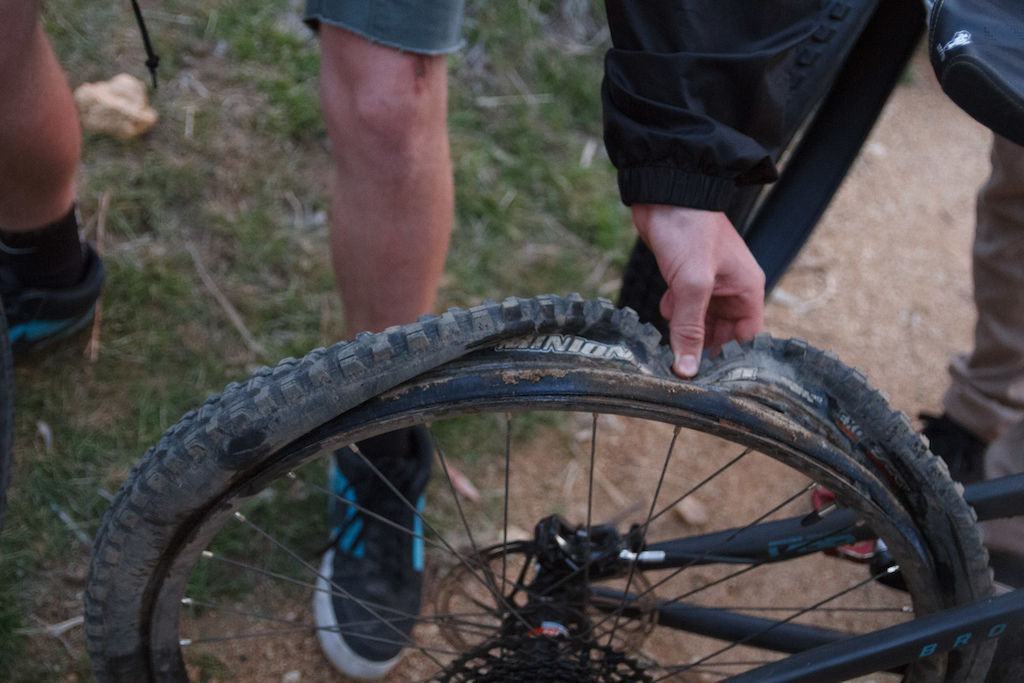 The unseated bead had folded over on the other side of the rim. Not bad for a tyre that was only two days old on a new bike.
The experience was one of many at Cannonball that happened at random when so many riders are in the one spot and who knows what we'll see next year!

I saw a video on his Instagram on a V10 and maybe a Giant Reign too?

Grutten (Dec 18, 2016 at 0:35)
@lukachadwick: You realise that at this stage he would just be testing as many brands as he can get his hands on right? Would mean almost nothing. also, pretty sure he did his race run on a Demo 8 still

Pretty sure he's finished up with the big S