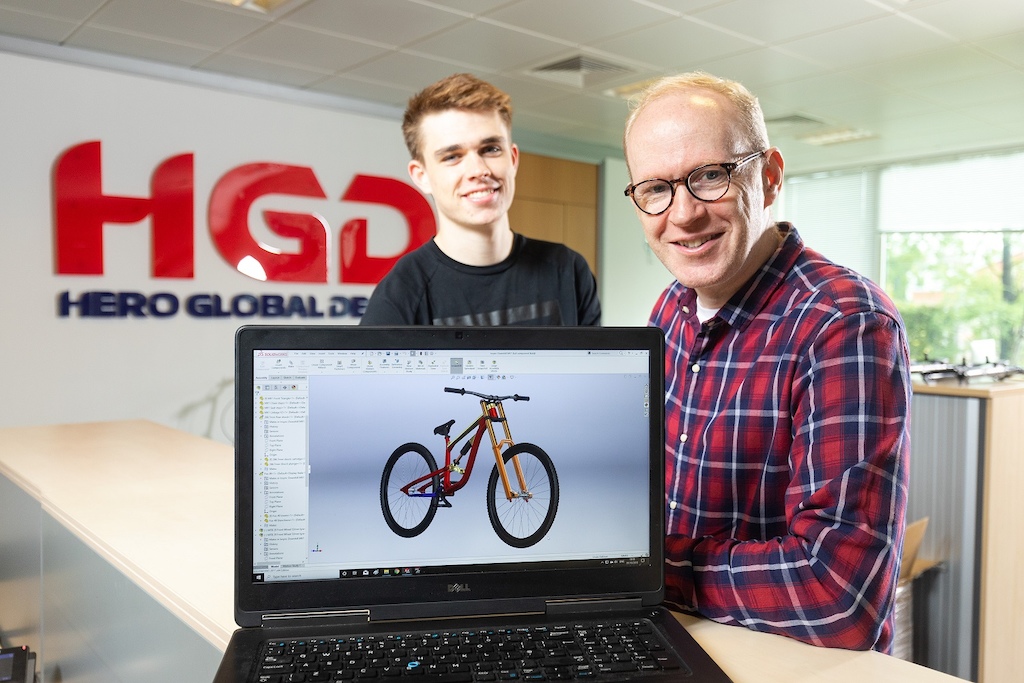 The UK based brand Insync will be developing a new prototype "state of the art racing bike" to be ridden by the company’s race team.

For next year the three riders have been working with Hero’s Global Design Centre, in Manchester, to come up with their own bike they can compete on next season. Inync are unlikely to produce this downhill bike for sale themselves as they are a more mass-market brand, however they intend to trickle down any information they can to help improve the rest of their range. All we've seen so far is a model on a laptop screen but hopefully more information will come through before the season kicks off in Maribor. 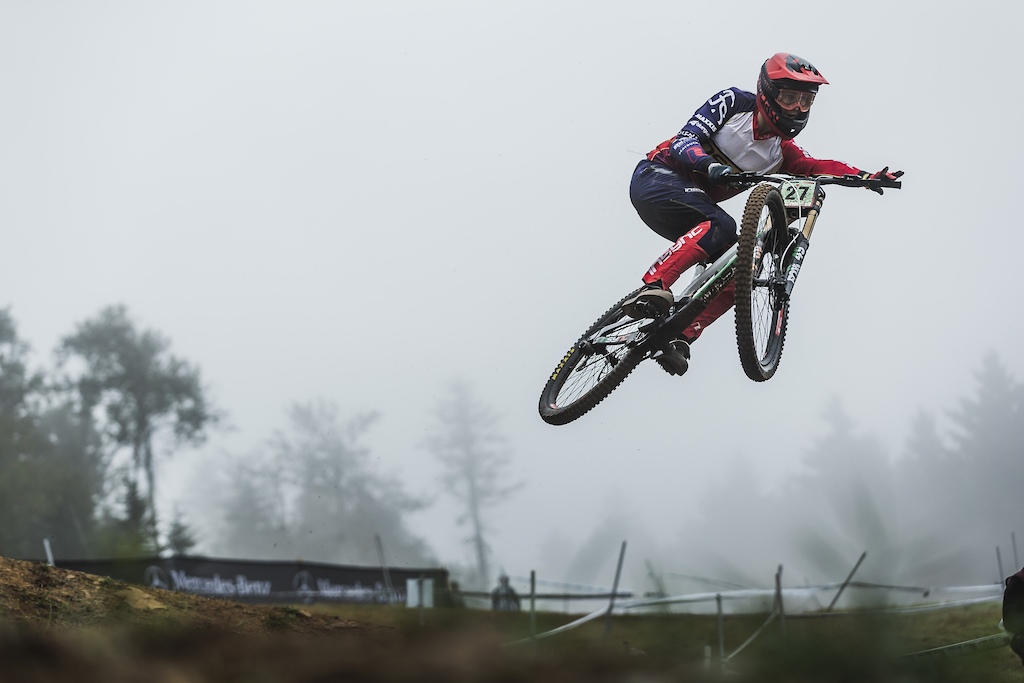 Prototyping for the new bike is set to begin this month, with a focus on refining the leverage ratios of the suspension to increase the level of progression. Steve said, "The harder it is hit, the more resistance it will offer in order to give a ‘bottomless’ feel to the suspension that inspires confidence. The geometry of the frame has also come under the microscope, which has included moving the seat tube to a different position to allow the rider much more freedom of movement." 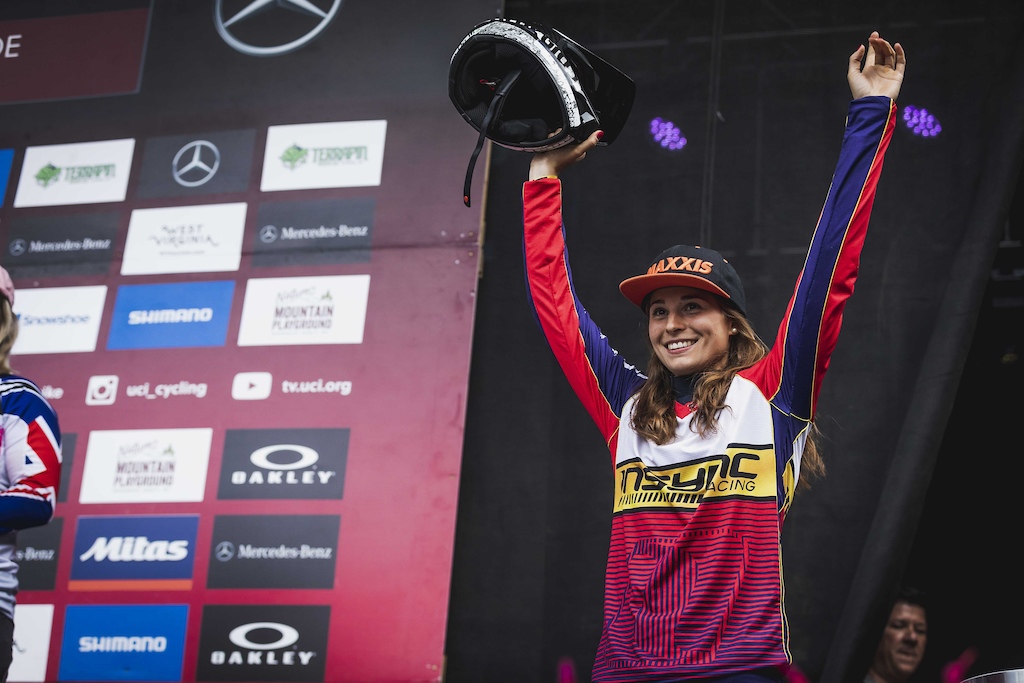 Insync, owned by India-based Hero Cycles, the world’s biggest bike manufacturer by volume, sponsored a team of three riders as ‘Insync Racing’ in the UCI Mountain Bike World Cup this year, one of the leading events of its kind in the world.

Steve Bridgeman, lead designer at Insync, has been working with the trio on the new downhill racing frame.

He said:“All the design decisions about the new frame have been informed by their experience as riders riding a variety of downhill bikes and drawing conclusions from their likes and dislikes about each one. We’re coming up with a bike for Insync Racing that suits the team’s technical preferences.”

Steve said one of the main focuses of the design sessions has been refining the leverage ratios of the suspension to produce a suspension that gets progressively stiffer throughout the ride. He said: "The harder it is hit, the more resistance it will offer in order to give a ‘bottomless’ feel to the suspension that inspires confidence. The geometry of the frame has also come under the microscope, which has included moving the seat tube to a different position to allow the rider much more freedom of movement. "

Steve said prototyping will begin in October, with more testing done to refine the model. Although it is not intended for mass production, it is expected that some features of the bike will trickle down into other Insync bikes.

Danny Evans, chief executive of Avocet Sports, the UK subsidiary of Hero said: “Harry, Veronika and Chris are all seasoned professionals brought together as a team this year and they’ve been extremely successful given that it’s their first season. We have been delighted with the impact they have made as riders under the Insync Racing brand. We’ve seen some standout performances from our three riders this year and we couldn’t be happier with their progress. Veronika has been involved in some nasty crashes but she’s got straight up and back on the bike, on one occasion still managing a podium finish in third place. We’re working hard on the new racing bike design looking at features and components that can make their lives easier. The ultimate aim is to then introduce these innovations to our mass market bikes under the Insync and Coyote brands. With the new bike design we hope Insync Racing will be even more competitive next season.”

Harry Molloy, who is also the Insync Racing team manager, said the opening season had been more successful that he had first thought was possible, with Veronika becoming a familiar feature on the World Cup podium, coming third overall and winning the European series. He said: “Overall, the team had a welcomed place into the race scene and shone in the light of the media. I was personally very pleased to have the opportunity to compete in Red Bull Hardline and I feel the whole team has stamped Insync Racing very positively on the map.”

Of the trio’s work developing and prototyping with the design team, he added: “This is an incredible opportunity to collaborate our knowledge from the height of the sport, directly with the height of design and manufacture. For us all as individuals, and with our future results in mind, this is the best partnership we could ever want.”

vinay (Oct 18, 2019 at 11:02)
Wasn't there an UCI rule that the bikes used in competition should be available to the general public within less than a year? The article suggests that they aren't planning to do that. How does UCI enforce this rule? Do they remove the athletes' results afterwards? Now that would be a shame considering how well they are doing. Then again I don't really know what "available to the general public" implies. Maybe as long as they make it available as a very expensive custom job they're good. It would only mean that no one can do any longer what Honda used to do with Brendog etc.

islandforlife (Oct 18, 2019 at 11:51)
Interesting... I've been wondering the same about Atherton Bikes... how long are they going to work on those "prototypes" before they release a freaking bike!!

vinay (Oct 18, 2019 at 12:00)
@islandforlife: Doesn't Atherton/Robotbike already sell these bikes? I'm pretty sure they'd rather do so sooner than later to recover some of the costs.

islandforlife (Oct 18, 2019 at 13:58)
@vinay: Where? How? Website has zero specs or even presents a bike. Their online shop only sells hoodies and water bottles. I think when they do start to sell bikes, we'll hear about it.

InsaNeil024 (Oct 18, 2019 at 11:37)
Just checked their website and that is one weird bike company. Seemed like a bunch of corporate jargon, hard-tails, and no soul. Not sure where a DH team or DH race bike adds value....

Superburner (Oct 19, 2019 at 17:33)
Rode the gondola with Harry a coupe years ago at MSA, awesome guy. Seemed that at that time he was out there running a team on an absolute shoe string, so it’s great to see that he has what at least appears to be some real support. Wish them all the very best in 2020.

“Explore our range of mountain bikes (MTB) which offer compact geometry for excellent bike control and shorter stems; ideal for trails. All mountain bikes (MTB) have a lightweight alloy frame for carrying uphill, with internal cabling and flared headtube for vibration reduction”

To a “state of the art” DH bike is going to be a really big jump. Though I hope they defy the trend and knock it out of the park!

Said no one, ever.

vjunior21 (Oct 18, 2019 at 10:23)
Well now that almost everyone in the industry is back on the 4 bar linkage design, they will have plenty of options if they have to take a step back.

Trabes (Oct 21, 2019 at 7:07)
Hyper does this one-off frame thing with Eric Carter. Trickle down tech? What happened to rebranding? Maybe some new decals on that YT...

chriskneeland (Oct 18, 2019 at 11:24)
@pdxkid: Great point. They're already the best bang for your buck. This sorry contraption doesn't stand a chance.

pdxkid (Oct 19, 2019 at 7:53)
@wvanlogg: I ride a #3K YT Tues and a $5K non gold plated Yeti SB130. There is no question which one is the better value. I'm not digging on YT at all. In fact, the fit and finish of the YT is every bit as good, if not better than the Yeti. YT bike prices are closer to "poor man" than almost any other brand. It is known.
Post a Comment