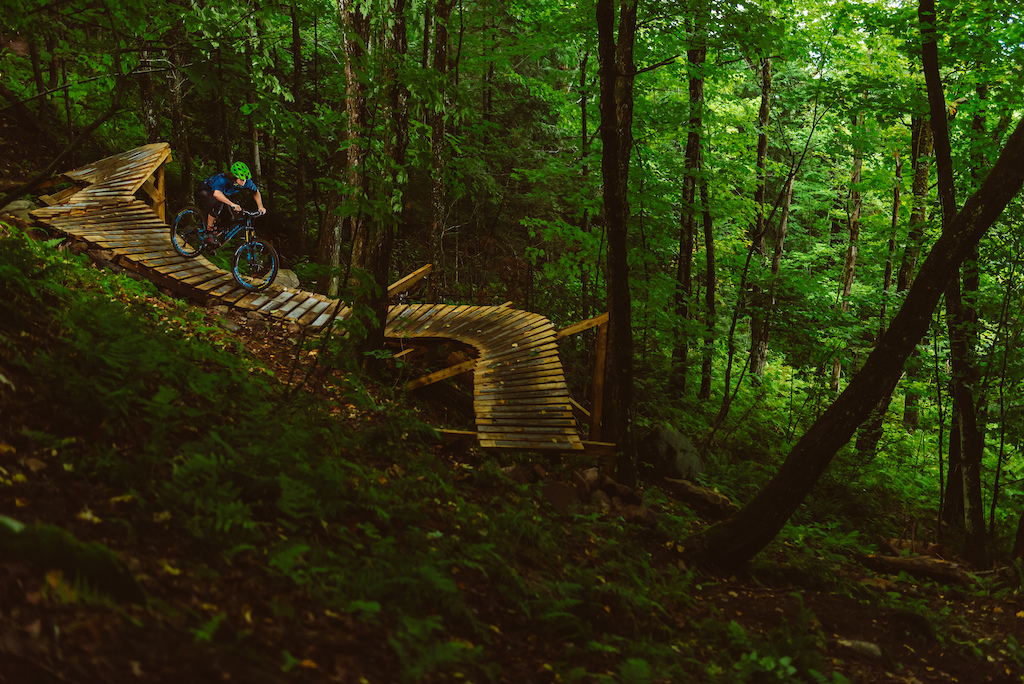 UNCOVERING QUEBEC CITY AREA
The Lac-Beauport Photo Op
A collective effort by: Gabriel Gakwaya, Étienne Dionne, Dylan Forbes & Nic Sauvé
I’ve always thought that Sentiers du Moulin would be a great place for some mountain bike photography. The trails are sweet with lots of creative features and, unlike most wooded areas around Quebec City which have been over-logged, this forest isn’t too messy.


After appealing for funds and lucking out with a few chance encounters, I had a small crew ready to go: Nicolas Sauvé on the bike, Étienne Dionne and Dylan Forbes on photography duties, and myself as the official ladder carrier. The plan was simple: spend all day going up and down the main hill and shoot along the way!

The first stop was on Viking, a new trail that incorporates several technical trail features. We chose this location because it has a bit of everything and we really liked how the stunt was built over a rock nestled against a big old yellow birch. 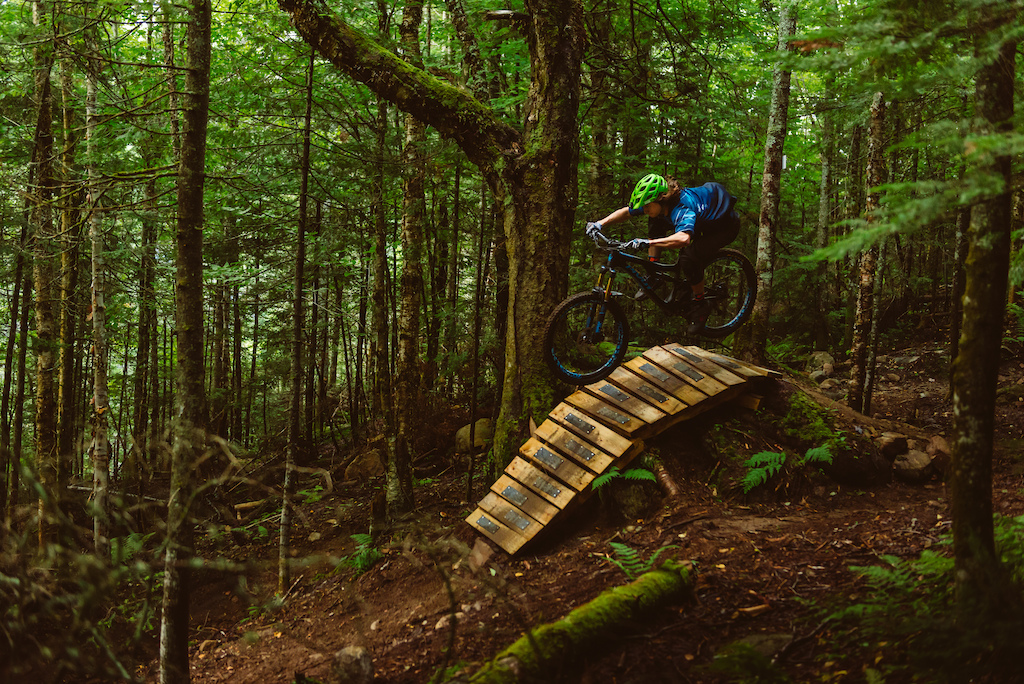 Not an easy feature to pop over, the timing needs to be perfect.

Still on Viking, we couldn’t pass up the photo op this snaking ladder was offering. Having the background change from thick with spruce to deciduous was another attraction. 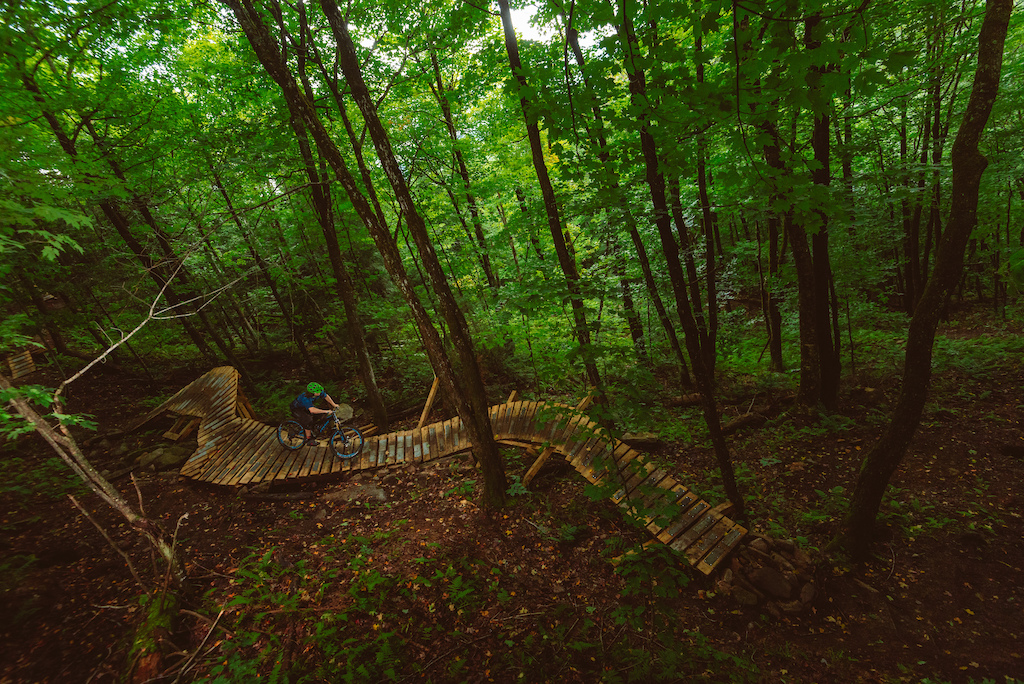 The first turn of this ladder bridge is trickier than it looks.

The next shoot was on LB-Cycle, a trail considered to be a “pro-line” by local standards. Since there's lots happening here from a visual perspective, the idea was to experiment with flashes and light up the rider as well as the root wad at the top of the rock. 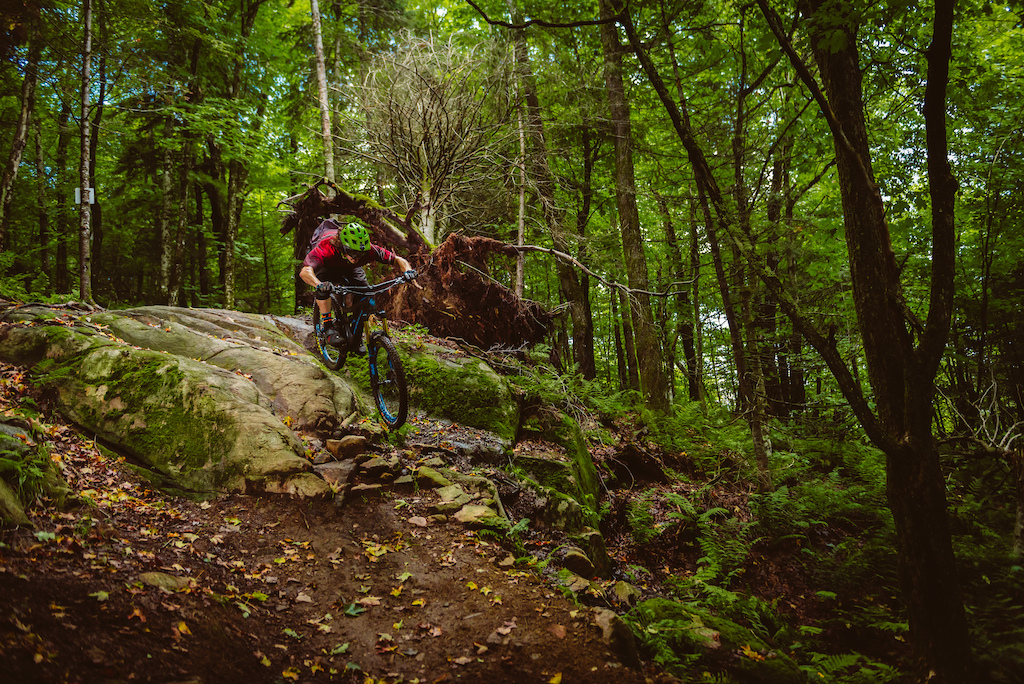 Riders often stand on top of this section for minutes, wondering how to ride it. Nis isn't one of them!

Next to LB-Cycle is LBC2, another “pro-line” trail. We didn’t plan on stopping here, but we all liked how gnarly this particular section looked. 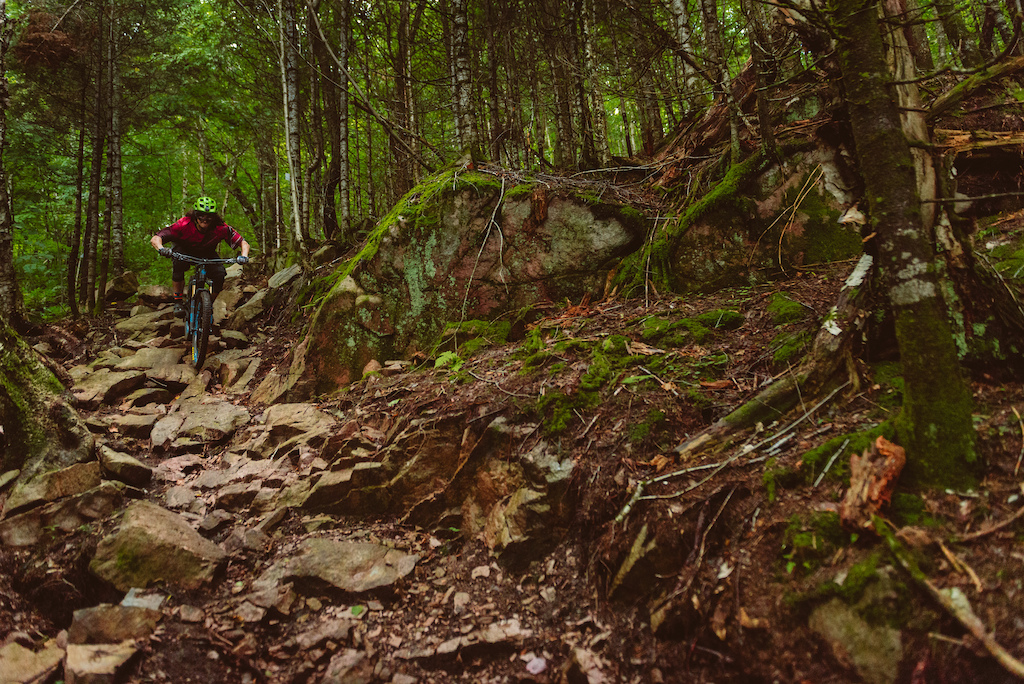 Something tells me that this section has claimed a lot of tires.

LBC2 starts with a huge slab that seems like it was put there as a gift for mountain bikers. If this spot looks familiar, it’s because it’s been well photographed in the past. We wanted to change things up, so we set about trying to find a new angle to shoot from. 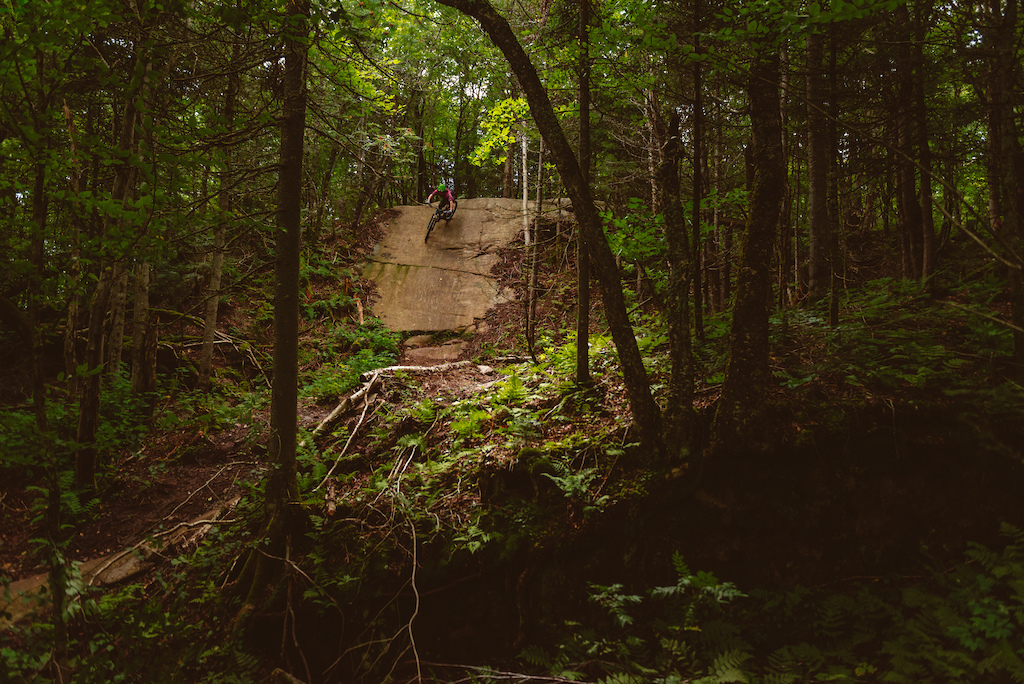 The Mother Slab from afar.
Here are the classic views in case you’ve never seen them. 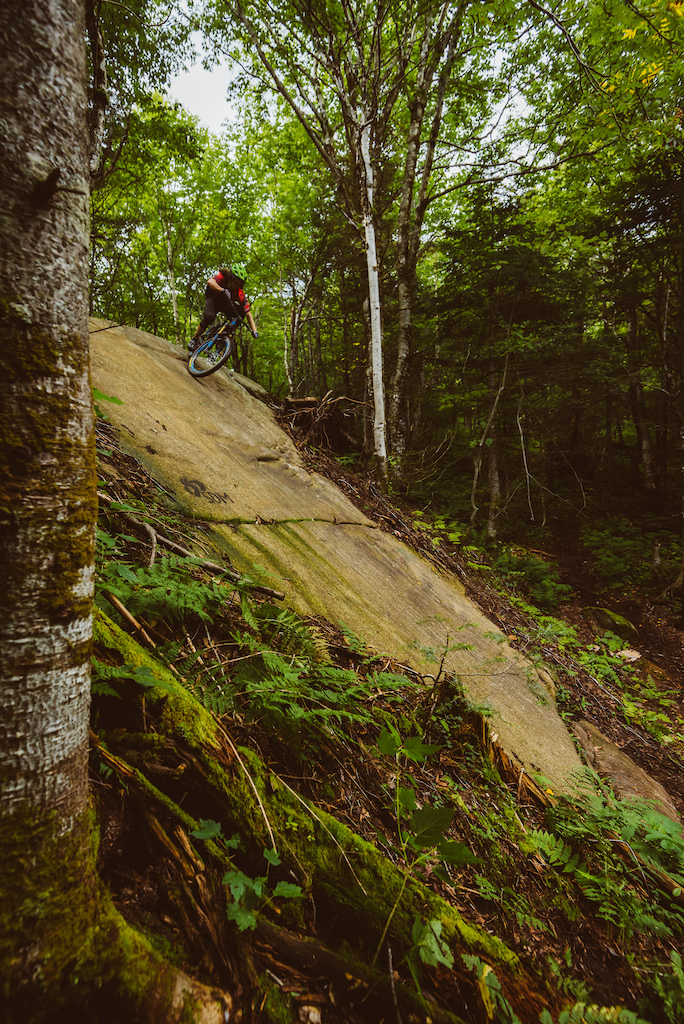 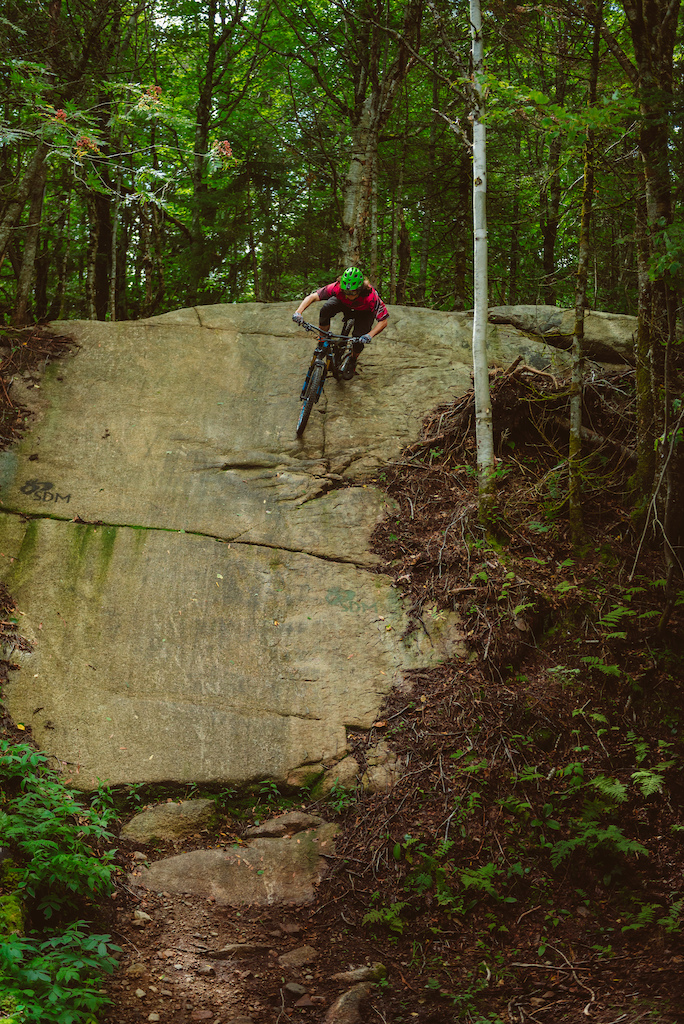 That's a great way to start a trail.
After the hike up Viking, LB-Cycle and LBC2, we decided to make our way down to a new projected trail currently named King Kong.

The trail was definitely not ready for two-wheel traffic but we were given the green light to test ride a short section where a small launcher has been built over a mossy rock. Nic sessioned it a few times and we were off to our next location. 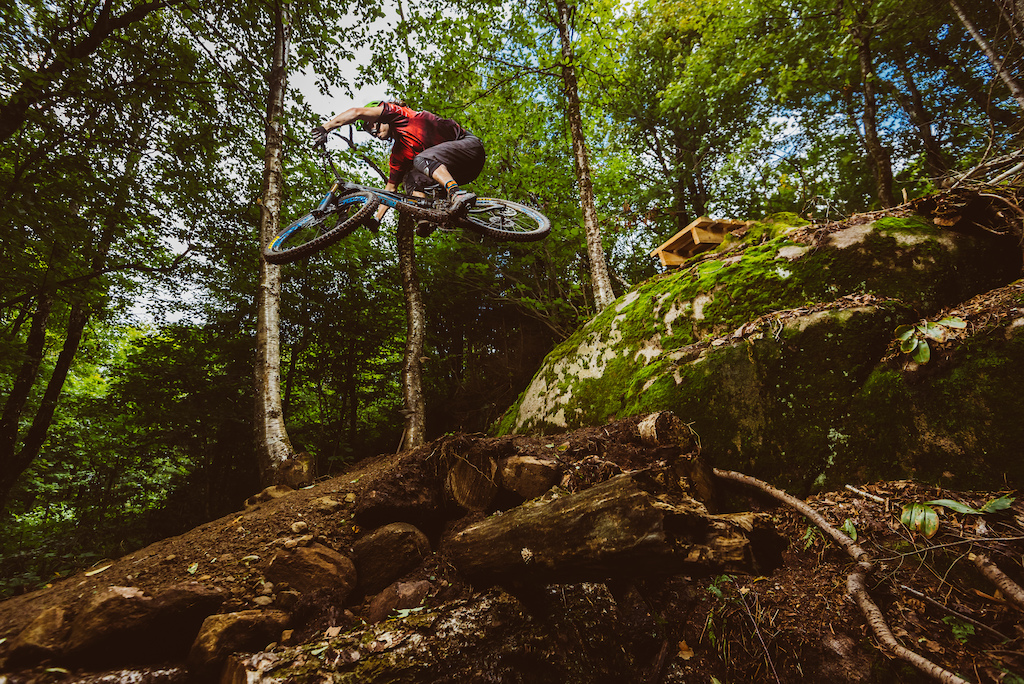 Étienne wanted to take a few shots in the lush vegetation at the top of Viking so we headed back up. By that time, our light umbrella had died an early and unfortunate death so we resorted to using a smaller softbox. 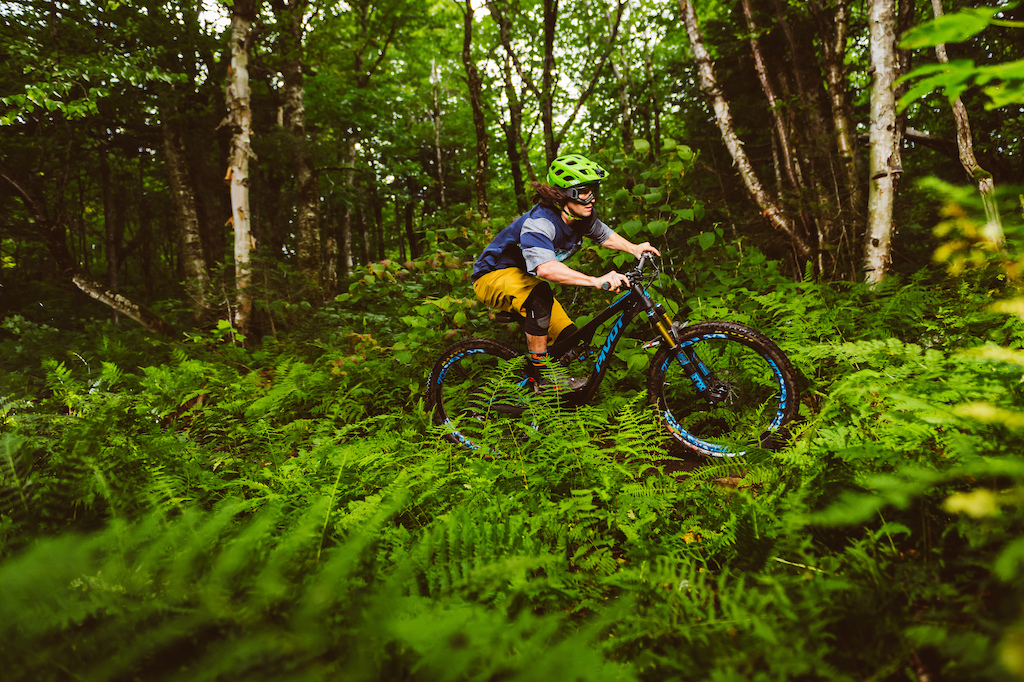 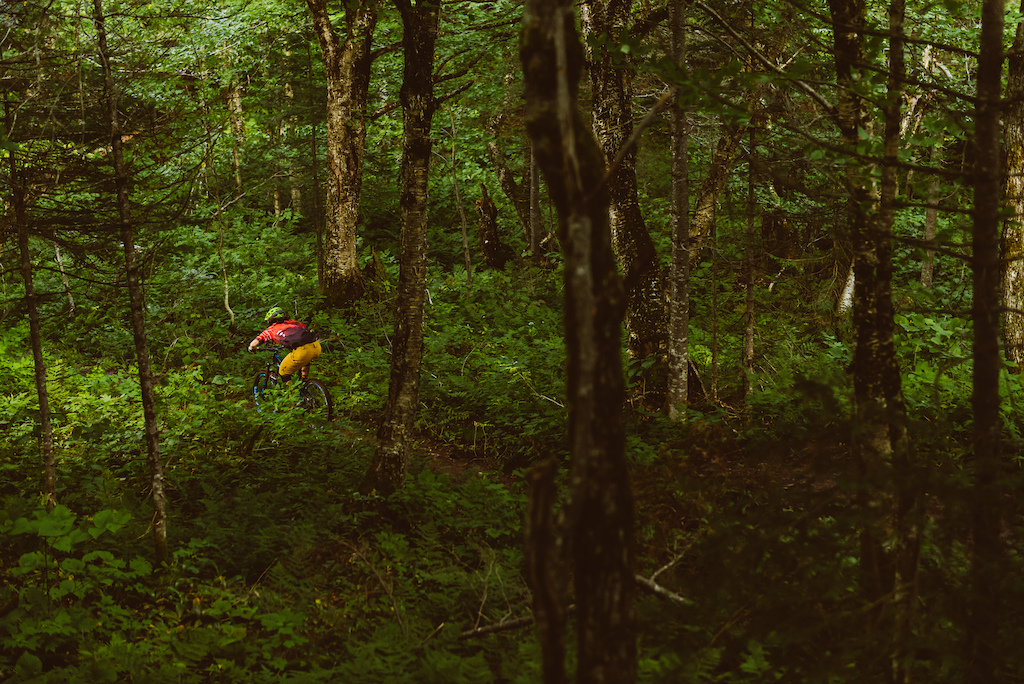 Nic knows the Viking very well, his POV on Trailforks.com is a must watch.
After a few tries (and a full costume change for some additional colour), we headed down LB-Cycle looking for one last feature.

Our search was successful and we were rewarded with some gnar! For this shot, Étienne climbed on top of a tall tree stump overlooking this well-built rocky section.

And that was it: the last shot of the day. Overall, we were all pretty happy with our day’s work and hope you like the results. Maybe we even got you stoked to come shred these trails…

With Mont-Sainte-Anne, Vallée Bras-du-Nord, and Sentiers du Moulins all less than an hour from the city center, the Quebec City Area has something for everyone, from classic XC trails to challenging enduro descents and World Cup worthy DH tracks.

dirtyrig (Sep 15, 2017 at 15:03)
Been coming here since the beginning and to MSE every year for almost 15 years, can't say how much I love this region, truly unbelievable, I knew it was going to get popular! Going up this week and checking out the trails at lac delage, which is close to Sentier du moulin
https ://www.trailforks.com/region/lac-delage/photos/

alexridesbikes-13 (Sep 15, 2017 at 13:24)
Definitely one of the most beautiful trail areas in the province of Quebec. The trails here are gnarly but SOOOOOOO much fun. The staff and the area is really good, nestled in the Laurentides mountains just north of Quebec City!

ogodude (Sep 15, 2017 at 19:54)
@SentiersduMoulin:
I agree, since someone brought me here earlier this season I keep coming back as much as possible. Keep it up guys! Great work

PLC07 (Sep 17, 2017 at 2:54)
Sentiers des moulins is my favorite Québec network by a long shot, perfect balance between skill and fun. Too bad I live 3h30 away from there. Keep up the great work guys.

jpetznick (Sep 16, 2017 at 15:12)
Whether it's on a bike or a snowboard, it would appear that Mr. Sauve doesn't lack any style or ability. Damn people hogging all the talent!

jimbsport (Sep 18, 2017 at 9:05)
the trails are goods at SDM because of the dedicated trail builder crew
good jobs Éric, Étienne, Jeff T, Jeff