Some call it THE AXIS OF EVIL, for me it's the country with the most hospitable people I've ever met, Iran. And it hides one of the highest descents on this planet, the altitude difference from the summit of Mount Damavand is greater than from Mount Everest to its Valley…

Would you have the balls to ride there? On a Unicycle? 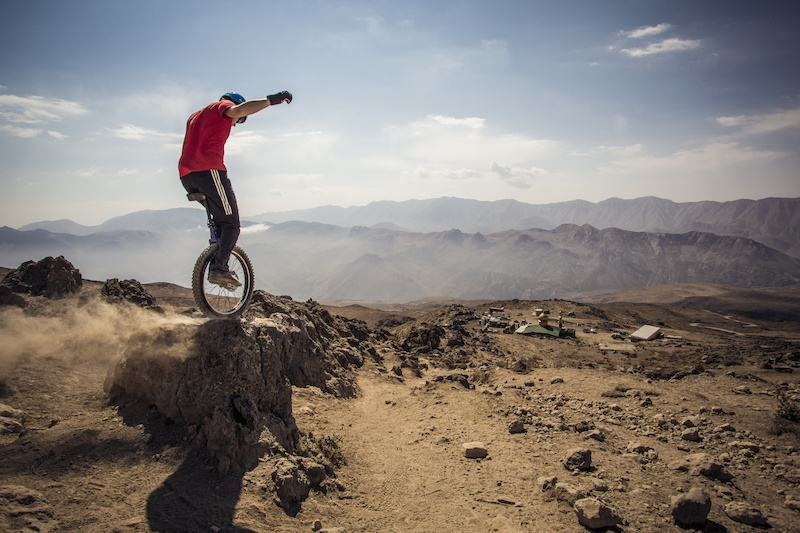 In the Persian mythology, Zahhāk the dragon guards over Mount Damavand, in real life the Dragon Mountain doesn't need a guard - the high altitude, slippery volcanic dust and extreme temperature changes are taking their own toll. Even Reinhold Messner had to turn around once and still it's one of the few very high peaks on earth that can be ridden on one or two wheels from top to bottom. After three years of planning and over 10 years of extreme unicycling, Lutz Eichholz succeeds as the first unicycle descent of the 5671m high Damavand in Iran.

Our little expedition lost members rapidly and like in a relay race the camera was passed on to the remaining members. A broken leg knocked out camera man one (me) and all I could do was explain my gear to the rest of the crew while a bunch of super helpful Iranian hikers were carrying me down the mountain. Sherpas and friends became filmmakers and hidden talent (our mountain guide, Mohammad Hajabolfath) was discovered and promoted to head of photography. The film camera once more shifted hands on the way up when cameraman two suffered from altitude sickness. Sometimes working from 9 to 5 in a protected office has its appeal… But you can't have an adventure without it being just a little bit dangerous, I guess. 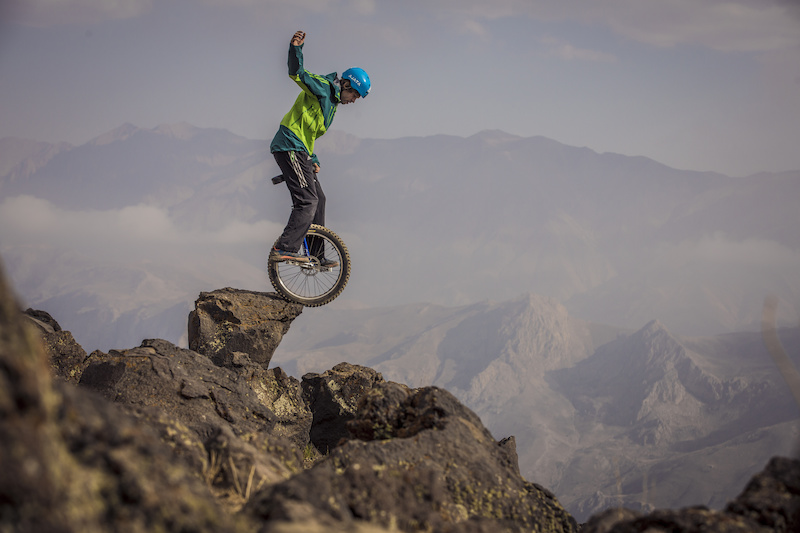 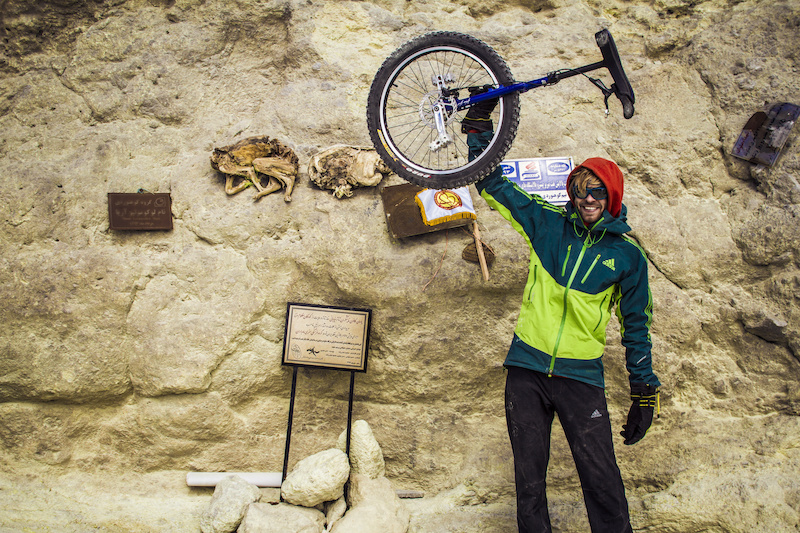 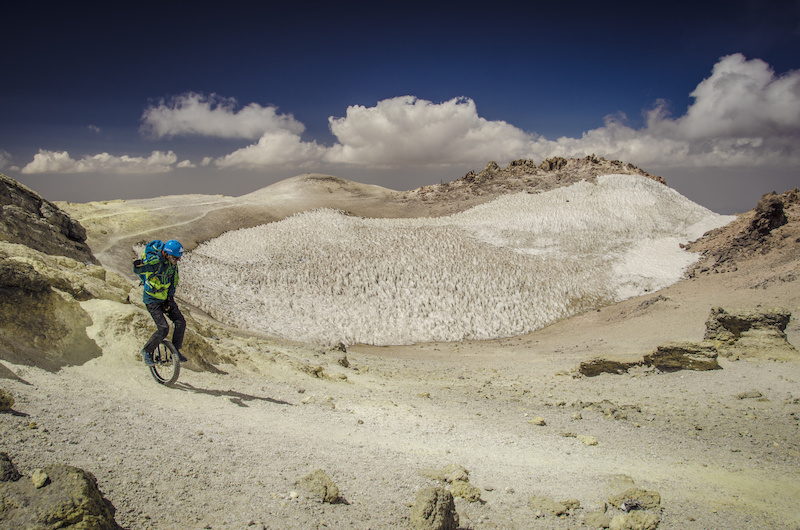 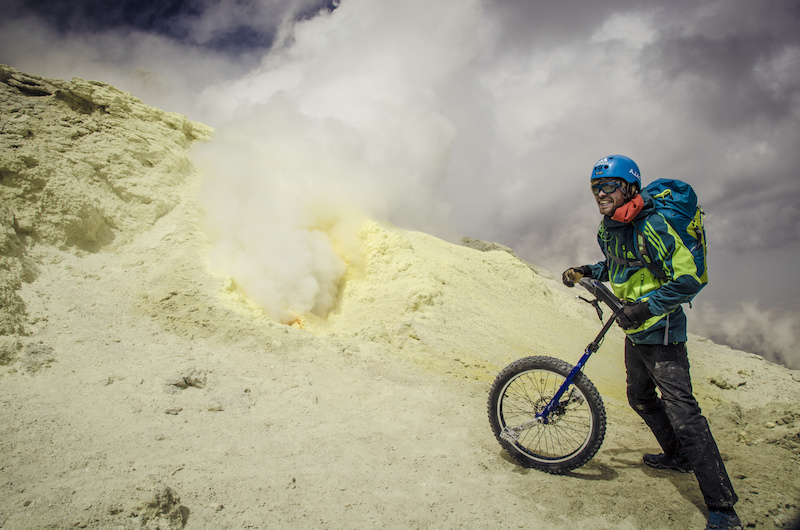 Sulfur fume doesn't really help getting up there 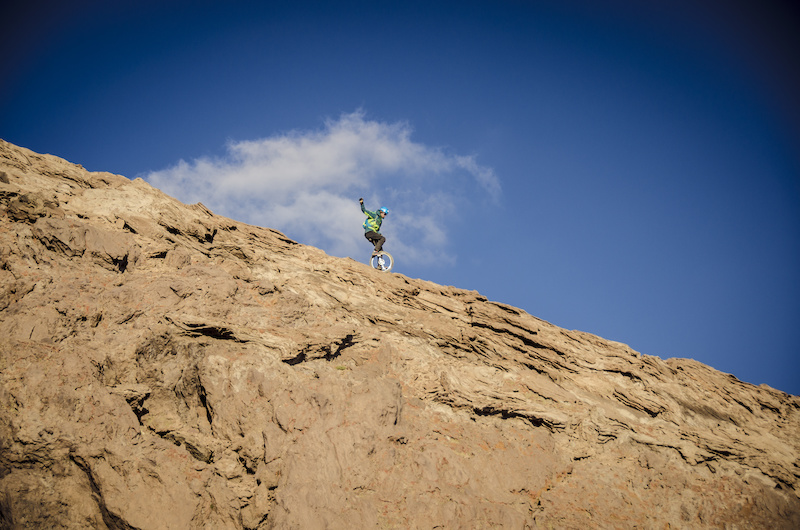 Huge thanks to Mohammad Hajabolfath, Johannes Schnebele and Fabian Schroer

Mattin (Jan 15, 2015 at 5:01)
He does look very happy on just one wheel. For me two wheels is double the pleasure, but i have big respect for what this guy does and enjoy seeing his passion!

konarider112 (Jan 15, 2015 at 18:23)
Don't care how many wheels. Great video. I think its awesome when people challenge themselves to ride really badass technical lines.

fr3er1d3r (Jan 18, 2015 at 6:06)
I'm a 2 wheeler rider myself. I kind of look at the unicycle as more of a handicap rather than an extension of myself, which is how I see a 2 wheeler. No disrespect. This guy's doing amazing things and seeing beautiful places. He's enjoying himself and harming nobody. Keep it up!

evillampost (Jan 18, 2015 at 9:02)
IIve ridden unicycles before and from experince its hard to go downhill. I can barley go down my driveway so going down this must be insane . This guy deserves a lot of credit. Cheers

bikecustomizer (Jan 15, 2015 at 13:25)
Two wheels...One wheel...No wheel. Meet soon some man madly running just by legs down the mountain with the full helmet on his head.

bbeak (Jan 15, 2015 at 14:43)
Just to nit-pick: The nice star movement scene is running backwards. Unless they moved the mountain to the southern hemisphere, you'll never see stars move from right to left in an arc like that. (Yes, I know. Clearly, I have no life.)

bbeak (Jan 16, 2015 at 16:08)
But they won't be going in that arc that you see. Instead, looking north, they will be circling Polaris in a counter clockwise direction at a rate of 15 degrees per hour. (And yes, this is further proof of my lack of a real life. Being a science geek can be so lonely especially when I venture into pedantic obnoxiousness.) This otherwise gorgeous sequence is the visual equivalent of playing a record backwards. It is naked-eye astronomical finger nails on a blackboard. (Great... now I have dated myself. Twice. I am an OLD scientific geezer with no life. Sheesh!)

infinitetrails (Jan 19, 2015 at 0:51)
Haha thanks for pointing that out, it's a filmmakers thing, we don't give a damn about science

RoverDover (Jan 16, 2015 at 14:51)
Here in Canada we don't care if the FBI is watching. we say and do what we want. despite many countries claiming to be free, we actually are.

RoverDover (Jan 16, 2015 at 14:52)
And Iran looks like a beautiful country, I know many Iranians and none of them are extremists or jihadists or whatever it is the government of the United States of CNN might have you think they are.

freeride-forever (Jan 16, 2015 at 17:40)
Sorry Rover but we're not "actually" free & we don't say & do what we want. We say & do what the Muhricvnts want. Canada ceased being consistently ranked the #1 country in the world to live in as soon as Dubya took office in 2001. The US threatened trade sanctions when we were going to legalize weed. A neighbor of mine has had his farm expropriated for the sake of an air base expansion that Canada does not need. Who needs/wants it? The Muhricvnts do. They say "jump" & we don't even ask "how high?", we just start jumping because the last thing we want is to be on the wrong side of those sneaky, vindictive, religious, genocidal military maniacs. Yeah we have all the right ingredients to be the best & if not outnumbered 10:1 we probably would be the best still. Defy them & the next jumbo jet "attack on the US" will be with a plane "hijacked" by Canadian "terrorists". Even their greedy entertainment media industry has their corrupt hands all over everyone else's business, even going so far as to try to police the entire internets to the point of killing someone (Aaron Swartz) when he tried to protest in favor of freedom. :s We try, but totally free, from a policy point of view, no we sure as shit are not.

Michaelgoround (Jan 16, 2015 at 18:36)
How could you possibly question the greatness of the American Government? They make dictators and then kill them some years later. They fund ISIS when it fights in Syria and denounce it in Iraq. They poke bears and then wonder why they get bit. Some may say only a foolish man would poke a bear, well, they are probably right...

RoverDover (Jan 19, 2015 at 18:52)
Dont worry ff, Stephen will get his ass kicked out soon enough. if he doesnt get assasinated first!

okay serious man, you WIN!! you are the best unicycler ever.

Biocoug1 (Jan 15, 2015 at 14:31)
One wheel is pretty amazing with no suspension. Can you imagine the amount of strength and stamina that guy has to have to maintain that kind of control the whole time.

J50005 (Jan 15, 2015 at 18:04)
My answer to the proposed question is NO I do not have the balls to unicycle....my question is regarding the opening monologue where he says this is the most challenging whatever of his unicycling career...unicycling is a career option?

friendlyfoe (Jan 15, 2015 at 19:04)
Always think it's hilarious to watch them pedal their ass off when speed picks up, but i guess a free wheel hub doesn't really work when going slower. At least it's easy to carry!

lostlunchbox (Jan 16, 2015 at 9:28)
I'm surprised no one's come up with some sort of clutch system for uni hubs.Just a little leaver under the seat. I'm a carpenter, so i can say with authority, it should be simple.

Imamountainunicyclist (Jan 16, 2015 at 12:47)
Freewheeling hubs have been made for unis but they are incredibly difficult to ride!

RoverDover (Jan 16, 2015 at 14:57)
thats great carpenter boy, make us on out of wood. it will be simple.
I make airplane parts all day long out of titanium and aluminium and precipitation hardened stainless steel. It would be a rather daunting task to make it light and reliable. Ever ridden Trials and had a chain snap or freehub explode? I have a permanently f*cked up roight kneecap that would like to tell you about the importance of driveline parts not failing during big moves.

RoverDover (Jan 16, 2015 at 15:05)
Gotta love all the haters who didnt enjoy this for what it is just because it wasnt a "Banging" DJ/enduro edit. yet most of these haters rarely ride anything other than their keyboards!

BADGERBOWL4LIFE (Jan 16, 2015 at 15:29)
Why is he not juggling flaming bowling pins at the same time. Barnum & Bailey's circus would be disappointed.

fedstahhhhhhh (Jan 15, 2015 at 13:32)
Put on the benny hill film song whilst watching this, its 10x better. But respect for the unincycling bro.

scottwilton (Jan 19, 2015 at 3:50)
The sidewall on most fat tires are not stiff enough on a unicycle. Also they have too much bounce which throws you off balance. You want some suspension/shock absorption in the tire but not bounce.

monkeynumberuno (Jan 16, 2015 at 4:57)
Just looks like they are riding around holding on to their rocks! Like they need the toilet really badly!

Mattin (Jan 15, 2015 at 16:50)
He doesn't need nearly as much braking power as a mtb. He doesn't go as fast as mtb's because he has his maximum spinning speed. And also his legs already provide for a lot of braking power, so the disc is just a bit extra for comfort and to take some stress off his legs.

Disclaimer: not as awesome as using you legs, and using the break only to hear the comforting sounds of wild turkey calls.

mb00033 (Jan 16, 2015 at 13:36)
Its a type Jeep Cherokee Wagoneer from 1960s called Ahoo in Iran, still working in pefect shape.
It was from the time that America was proud and were making things to work forever; not for a while like what P.R.C is making now.

RoverDover (Jan 16, 2015 at 15:01)
gotta love the plastic disposable crap the pass off as a "Modern Automobile" these days. My 1987 LandRover makes most new 4x4s look like childrens toys. I have driven a few old Wagoneers that would still be around if it werent for road salt and rampant consumerism driving the desire for planned obsolescence of the new car.

pedaling with rollerblades on.

It's on pinkbike because it's cycling related awesomeness.

hughdesmond2006 (Jan 16, 2015 at 2:46)
you must be joking, hes on a mountain, hes going downhill over rugged terrain on a pedal powered machine, which has one wheel instead of two. They post snowboarding, skateboarding and just plain random videos from time to time, don't be so snobby, variety is the spice of life!