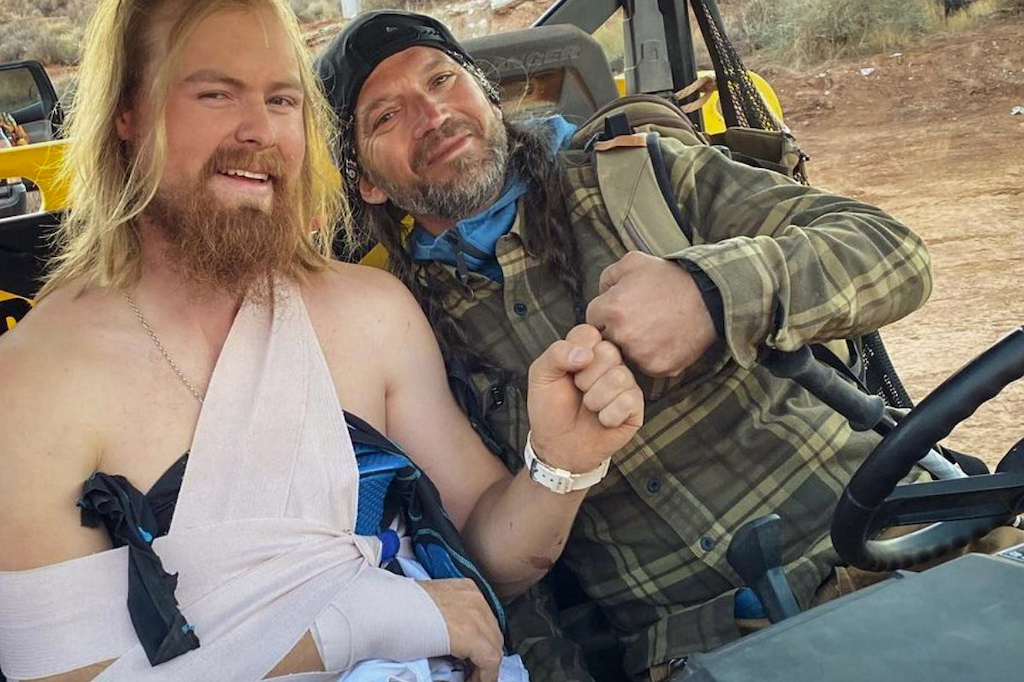 Brage Vestavik shared an update on his injury sustained in Rampage practice and said he dislocated his shoulder and sustained multiple fractures to his humerus.


Below are two angles on the crash.

Brage Crash from Above


by alicialeggett
Views: 32,374    Faves: 13    Comments: 1
Best healing wishes from all of us at Pinkbike to our favorite biking Viking.

onemanarmy (Oct 15, 2021 at 11:34)
Knew he was tough but damn. Dude got up and walked away with that. Good on you! Gutted for you. Everyone in the world was looking forward to that run. Heal up. Barber... invite this dude again.

mexicant (Oct 16, 2021 at 16:04)
He got robbed the Xgames and I know he would have taken Rampage. I am a big fan of all of the riders but this guy is next level raw. He would have killed Rampage! So bummed he didn't get to compete!

tomich1 (Oct 17, 2021 at 18:09) (Below Threshold)
@mexicant: I respect your opinion and I think Barge is a beast.. but there is other guys in the competition that have been doing it way longer then he has with a bigger bag of big mountain tricks. I honestly don’t think Barge was ready for rampage. He’s done some BIG ASS CRAZY SHIT but rampage is next level. Good on him for trying tho. He will come back and smash it one day.

Brandon Semenuk did two tail whips AND rode a single crown fork (never been done before on the rampage stage) He would of won regardless. No hate all love. Peace

NebulousNate (Oct 18, 2021 at 8:07)
@tomich1: No one has ever been on a single crown at Rampage? Ever heard of Robbie Bourdon? Lol time for a little bit of homework.

I really hope he gets another shot, and is not just another one rampage and done like so many others who got hurt during practice, their first time out. Either way he's got a bright future... Heal up, you've got a lot of supporters/fans.

milesofpain (Oct 15, 2021 at 11:41)
Hope he has a speedy recovery! It's crazy to me that most of these guys don't wear any upper body armor. But, serious question, would that have even helped here?

WishIWazFaster (Oct 15, 2021 at 15:34)
I think Tippee's video shows he was wearing some body armour under his shirt, including shoulder pads. But it can only do so much. :-( Gutted for the guys who can't compete this year, I was really looking forward to Brage's run and hoping he'd make it to the bottom. I hope he gets to ride, survive and film his line when he's healed up and ready.

Nekron (Oct 15, 2021 at 16:06)
Rampage is flawed. The slopestyle guys who have a big bag of tricks can rack up points that way forcing the freeride guys to do stupidly huge moves to try to keep up and they eventually get mangled. Something has to change.

redrook (Oct 15, 2021 at 17:48)
There has always been huge crossover between the two, at least for the last ten years. Semenuk, Zink, the McCauls and loads of others all did slopestyle as well as Rampage. And you've still got the more "freeride" guys like Strait and Sorge placing high (6th and 2nd respectively this year). I think it's pretty clear from the judging that the freeride element is super important, not just the tricks.

madmon (Oct 15, 2021 at 22:29)
His landing looked like a Bender not like the over sculpted transitions the slope stylers demand. Ya raw massive tough lines get you a ticket on the bus not the podium.

ww27 (Oct 16, 2021 at 1:30)
@redrook: Ya, some guys placing consistently well have been at the top of the game for like 10-20+ years. They are all super solid in every aspect of their riding. Unreal some of the careers these guys have had, and are still deadly to watch! I really enjoy watching Genon hop around between disciplines and just throw down a solid performance in everything he shows up at.

jptothetree (Oct 15, 2021 at 13:21)
Omfg that is such an insane send. He needed literally 2 more feet and he would have greased it perfectly

Hope to see him back stronger than ever in the future!!!

jptothetree (Oct 16, 2021 at 7:15)
@slayerdegnar: Literally only needed like half a crank more before taking off and it would have been perfection! Such a heart breaker

But it's part of the evolution of Rampage and has been since the early days. Just hucking off of the biggest cliffs is not as big as it once was. Pro riders like Vinc, VinnyT, Zinc etc etc are hitting these like it was nothing. But I still remember how exciting it was to see backflips, 180's, tail whips, forward flips, no handers slowly creeping into the event.

This made Rampage more exciting and no one back then complained. It's saying to the competition "Oh you can huck off that ledge? Me too but I can also do a forward flip off of it"

I think if Rampage had rules against doing tricks the event eventually would cease to be exciting. The average person doesn't sit in the race car, or in the action of a UFC match and same with mountain biking. If the average person sees people doing gnarly lines and hucking off huge jumps but making it look easy then eventually people will become used to it.

Just a thought about slopstyle riders competing in Rampage.

Staktup (Oct 17, 2021 at 9:37)
I think every rider who pulled out due to injuries should automatically be invited back.

Camstyn (Oct 15, 2021 at 12:40)
I hope this doesn't mean a proximal humerus fracture, that would NOT be good. Been there and it was a nightmare recovery.

happystinkyman (Oct 16, 2021 at 3:28)
Just realized the fist bump is going to Bender in that photo, lol that explains alot

Corkster9 (Oct 15, 2021 at 11:58)
How many athlete’s health do we need to damage temporarily or perhaps permanently with rampage in the name of out entertainment and redbull’s profits?

progressionobsession (Oct 15, 2021 at 12:04)
Biking is life for these guys. Don't most of them say this is what they love doing anyway?

Corkster9 (Oct 15, 2021 at 12:46) (Below Threshold)
@Fishoholics: um, no. Athlete exploitation isn’t a real thing. Some of these athletes aren’t going to be able to have a normal quality of life in 10-15 years and for what, so you can be entertained?

mountainsofsussex (Oct 15, 2021 at 13:09)
I have a feeling that all of these athletes would be doing similar stuff out with their buddies anyway if there were no cameras, no sponsorship. Yeah, there's pressure to push yourself, but little worse than out in the woods with a bunch of testosterone filled guys. At least here there is a medical crew

Chives09 (Oct 15, 2021 at 13:55)
Im willing to bet that all of these athletes would still be doing this even if it wasnt for the pay. At least Matt Hunter would. (I know not a rampage guy but he still hucks)

onemanarmy (Oct 15, 2021 at 14:23)
@mountainsofsussex: Most of them do. Hell Tyler moved out there on purpose. Nell. Dj. Reed. Riddle. Those guys ride out there all the freaking time... for fun.

tomich1 (Oct 17, 2021 at 18:14)
These guys would most likely still be doing this shit even if there was no cameras rolling lol get a life you knob.