Join Pinkbike  Login
Urban downhill events are on the rise during the traditional World Cup race season. From Lisbon to Rio, racers are taking to the streets of major cities and bringing downhill racing to the people. This winter, racing has moved to the asphalt and cobblestones of major cities in a serious way, with 4 races taking place in Colombia, Brazil and Chile in as many months.

The longest standing of these events is the Valparaiso Cerro Abajo (VCA) race in Valparaiso, Chile. In it's 8th year, this event draws over 10 000 spectators, shuts down the largest port city in South America and has been visited by some of the top names in the business. Full story with pics inside, 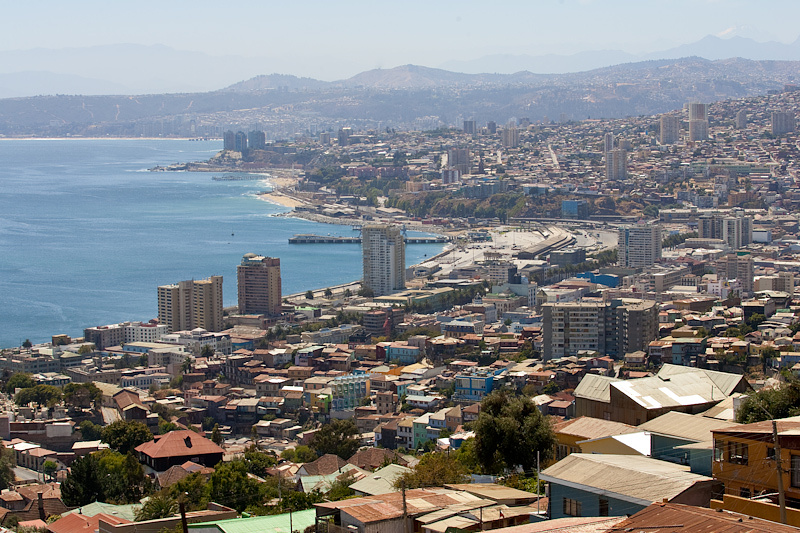 Valparaiso and Vina del Mar in the distance. Not a bad place to race in February.
This year's event was stacked with talent as World Cuppers Chris Van Dine (USA), Filip Polc (SVK) and Andrew Neethling (RSA) as well as freeriders Andreu Lacondeguey (ESP) and Graham Agassiz (CAN) made their way south of the equator to tackle the stairs and cobblestones of Valpo. As a UCI event this year, many other riders made their way to Chile from around North and South America, attempting to earn enough points to qualify for this year's early World Cup rounds. Without many national races before, races like these are fast becoming an opportunity not to be missed for those on the cusp of making the big league.

“You could have 2 seasons, a winter and summer. An urban race season in the winter, and a normal World Cup season in the summer,” commented Polc. CVD agrees “there’s a lot of World Cup guys that would pin it down here.”

This is coming from a man who knows both the world cup, as a long time race veteran, as well as the new urban race scene. Polc has won all 4 major urban downhill races since October last year, and isn't showing any sign so fading. 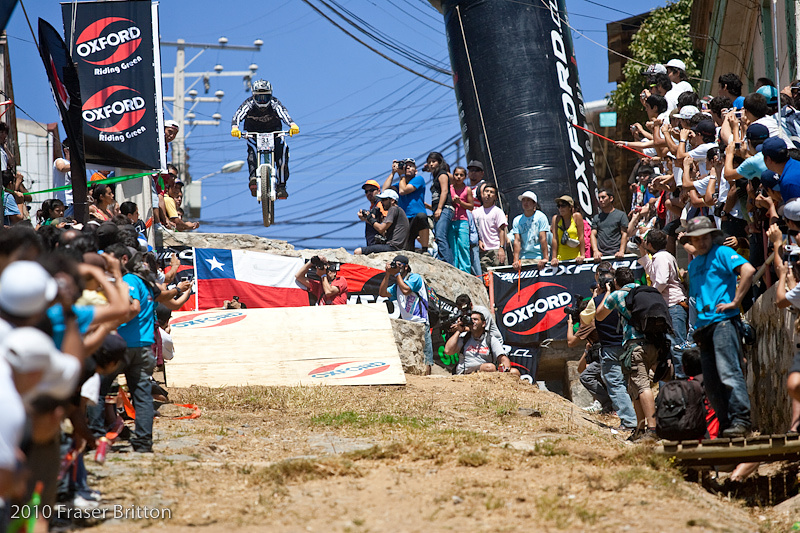 James Jeannet (CAN - Transcend Orange) flies off of the first large jump on the track as the crowd parts.
This year's VCA event featured bigger drops and gaps than ever, and higher speeds in a few sections that were straightened out. The bigger gaps took their toll on both riders and landings, as more than one jump had to be re-welded after a rider came up short. "I've never seen so many broken jumps" laughed Polc during practice. Most races have course workers on staff, in Valpo, they have welders. 2 to be precise! 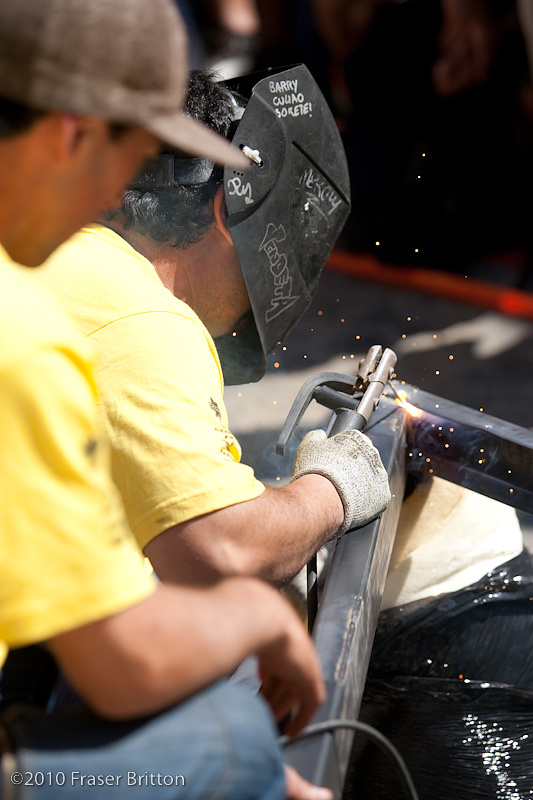 Minor jump repairs during practice. Bring in the welder!
Once again the race started high above the city, on the top of Cerro Carcel, one of Valparaiso's 28 hills. It wound it's way down steep city streets, between extremely tight staircases and off extremely large retaining walls, some of which have been there for over a hundred years.

Once racing got underway following a few last minute landing repairs, and some police action to get a drunk old man off the course (much to the crowd's delight) Polc went to work. The Slovak decimated the field, winning by almost 6 seconds. 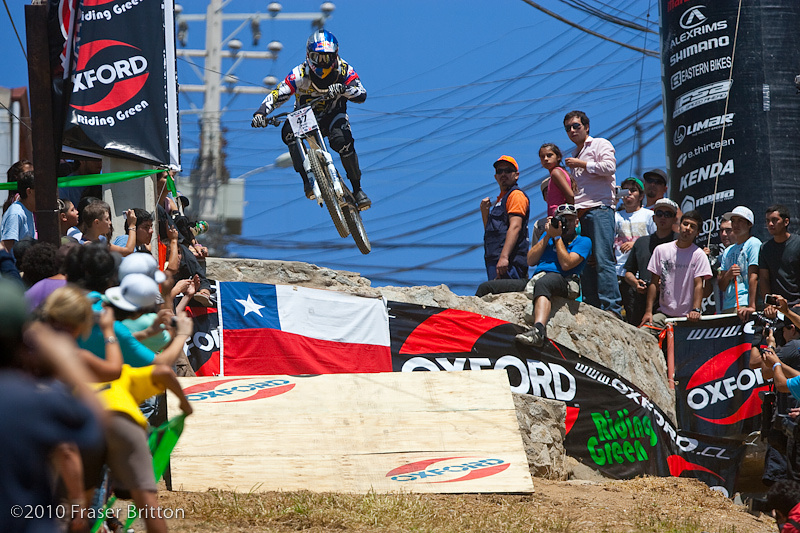 Filip Polc (SVK - MS Evil) showing everyone how it's done.
Polc was followed by Enrique Genova (CHI) and Mario Jarrin (ECU). Andrew Neethling went down hard after clipping his bars on a lamp post in practice and had to go get stitches. Lacondeguey and Agassiz just couldn't keep the pace, and both decided to take it easy and not risk their necks on one of the sketchier jumps, using a wall ride option line instead, adding at least 6 seconds to their times, and not making the finals.

For the women it was Luana Oliveira (BRA) who took the win, and Chilean rider Veronica Miranda in second. Last year's winner, Micayla Gatto of Canada came up short on a very large drop after her chain slipped in practice, and wound up knocking herself out and taking a trip to the hospital. She wound up being rather shaken, but not too much worse for wear. 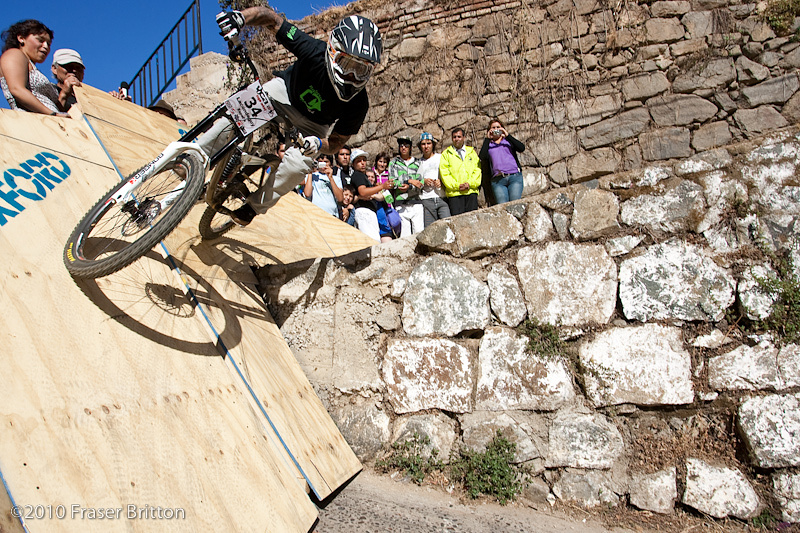 Andreu Lacondeguey (ESP - Kona Clump) opts for the wallride go around.
Needles was back in time to watch racing and had this to say afterwards "It would be good if it wasn’t right near a World Cup season and I’m glad I got away unscathed but it was a cool experience, that’s why we all came I guess. It’s good for the sport for sure and it will grow it...they just need to make things a bit safer because at speed it can go wrong, it can just be bad." 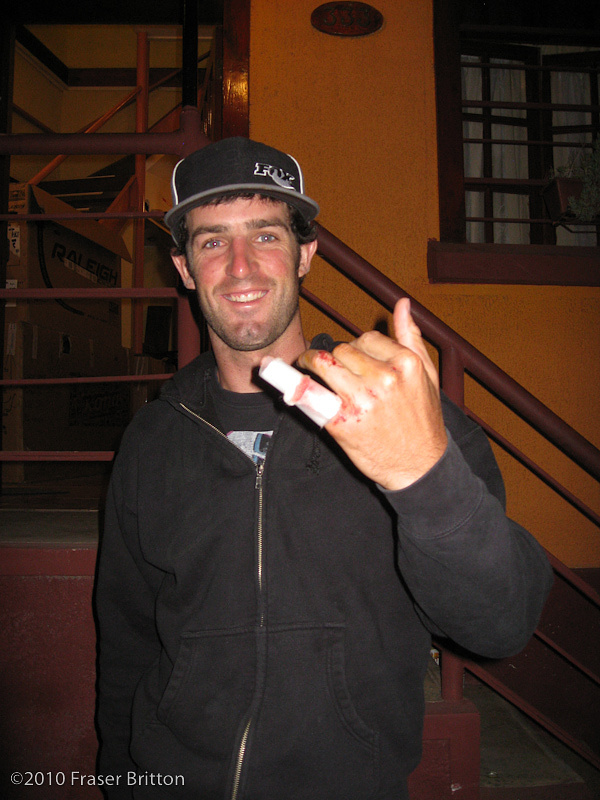 Needles (RSA - Trek World Racing) shows off his fresh new Chilean Souvenir; A half dozen or so stitches!
Live TV, live radio, UCI points, good money and 10 000 mental fans. This is what racing needs. Moving a winter series to the city may have seemed silly to some riders before, but many are now starting to see the light. Look for this sort of racing to start to take off given the success of recent events.

So much for the "off season"! 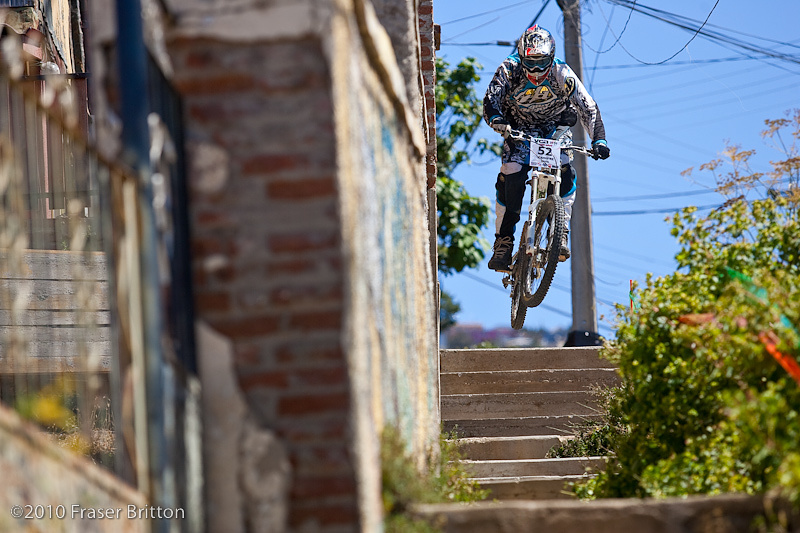 Yannick Wende of Bolivia takes to the stairs where Needles went down. 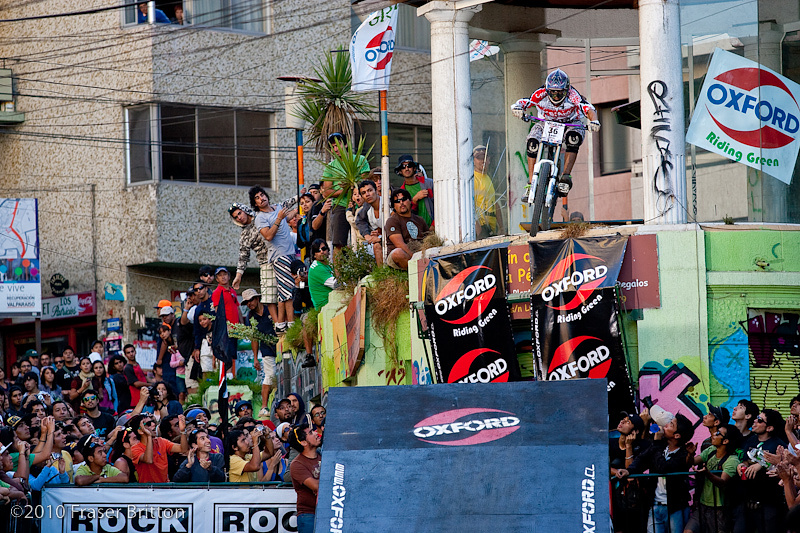 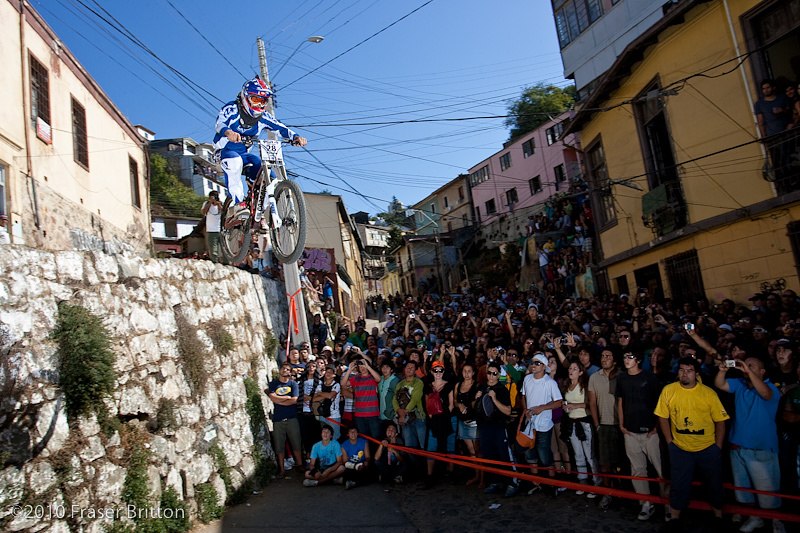 Mike Haderer (USA - Corsair) looks like Captain America as he throws himself off of the biggest gap on course.

Interview with Polc and CVD post earth quake via Skype:

fraserbritton (Mar 2, 2010 at 13:38)
We just added a skype interview with CVD and Polc from the morning after the earthquake. Those guys are still down there, stuck, as the airport is closed until possibly wednesday. Polc is driving with a few others to Mendoza, Argentina; and then taking a bus to Buenos Aires to try and get home!

fraserbritton (Mar 3, 2010 at 10:12)
The landing on that jump was fine. The tale off was skethchy, it was removed. It was perfect afterwards. It was narrow for a reason. There was a go around. Not comfortable in your abilities, then go around. FYI, Luana did it just fine. Needles, Polc etc hit it just fine.

rodrigo24 (Mar 2, 2010 at 16:45)
i live in san juan, argentina, next to cordillera de los andes. The earthquake in this area was strong like 5.5, but nothing unusual. The problem in Chile is that the structure of the buildings are not anti-seismic, mostly of the houses are made of wood

ltrumpore (Mar 2, 2010 at 17:29)
Um, to the contrary, the buildings in much of Chile and especially in the cities are built specifically to resist the forces of earthquakes. And some of the words best engineers in that field come from Chile, as the country has a history of large, violent earthquakes (largest one in the world in the the past 200 years, and 13 at 7.0 or higher in the last 35years). Read your news, Chilean building construction is being credited heavily for minimizing what could have been a much bigger catastrophe.

nightfox (Mar 2, 2010 at 21:19)
Chile is awesome and the people are great. Shame I never got to visit Valparaiso. Last year it featured the Dakar Rally race of South America!

allenrotstein (Mar 2, 2010 at 13:05)
Agree with Telmoberg, even tho it's nice to see more and more DH events like this i gotta say those jumps/landings are kinda sketchy. Flat landing on concrete? not for me, thanks! Would be nice to see some vids of Neddles crash..

mattias40000 (Mar 2, 2010 at 16:02)
guys, you where not there. :/ Those where not flat landings, in fact, there were pretty good landings. It´s true, very sketchy and some broke because they recive heavy hits with the riders jumping at high speeds and hights. Next year they are suposed to be way better. very year they learn something new and keeps getting better and better. Andreu and Graham decided to ride safe. As i remember, Andreu said "this is the gnarliest thing i´ve ever been in" and i belive thats a quote. if some of you can go there sometimes, you wont regret, ITS AWESOME

Tell me that the first jump compilation vids is a well built jump....

mattias40000 (Mar 3, 2010 at 10:24)
It was well made, i saw it. It broke cause someone came up short. People want to see riders land it because of its magnitud and difficulty. True, its small, but there was an optional. Only a few riders missed it. True thing: most of the crowd no nothing about MTB and less than 1/4 know as much as we riders do, but its a show they like. Every year it gathers more and more people. If you where not there, dont say anything until you see it for yourself or go and build up a better one. next year is gonna be way better.