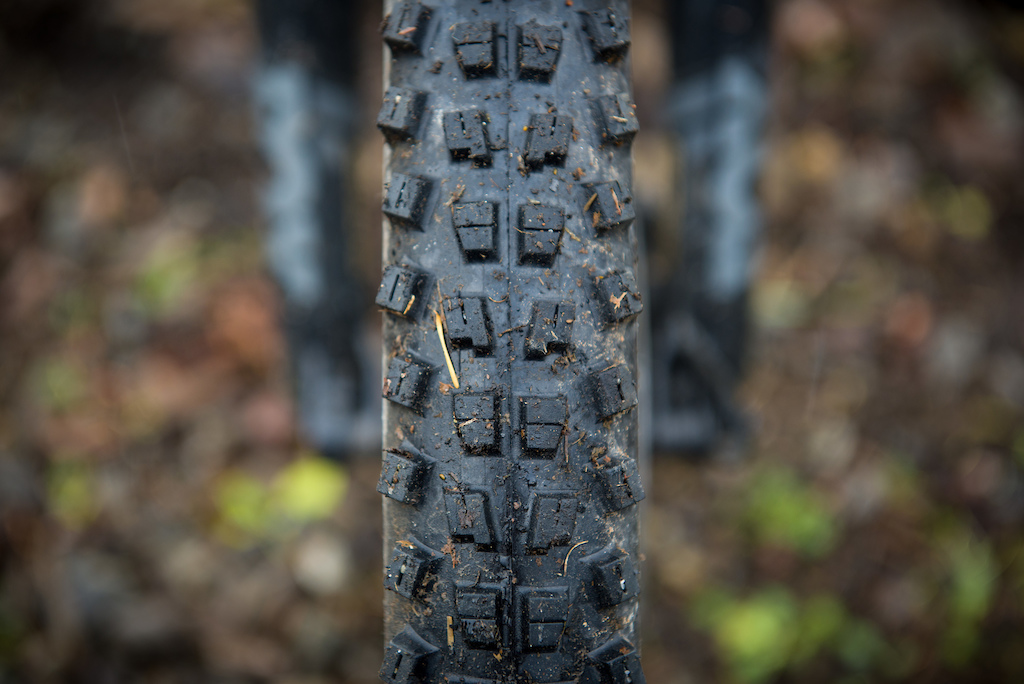 Call me crazy, but I doubt it's the Vee Tire name that pops into your head when you need new rubber for your all-mountain or downhill bike. And even if it is, you likely know the company as a value brand, not one that offers a small lineup of all-mountain and downhill tires meant to compete for your bucks against the best from Maxxis, Schwalbe, et al. But that's exactly what the $65 USD Flow Snap is meant to do, with the brief saying that it's ''a universal and polyvalent gravity tire created for a variety of different conditions from mud, to dry or loose terrain.'' Nothing like a good polyvalent tire, right?
Flow Snap Details

There are only so many effective tire designs these days, and most seem to be converging on a basic lug layout with a few variations thrown in for good measure. With the Flow Snap, however, I can see a couple of inspirations beyond the tired "it's a Minion but not" layout, and it also turns out that the design delivers some unique performance.

The Flow Snap's lug layout features an uninterrupted middle channel that's flanked by crown lugs alternating between being closely spaced and spread apart. A relatively open (for an all-around tire design) center section is the result, which is often associated with comparatively slow rolling speed. Those crown lugs are ramped on their leading edges to help that cause, and every lug has a sipe through it to encourage it to conform to the ground as well as possible. There are no transition lugs, but the widely spaced crown lugs bridge the gap between the center of the tire and the pronounced cornering lugs that all sit at an angle.

Vee Tire has used their 'Tackee' dual-compound rubber on the Flow Snap that combines 48a and 54a durometer rubber. ''Tackee compound offers the smallest rebound for more control on downhills,'' their website explains. ''This compound features a low hardness of 48a.''

The Flow Snap tires were installed on a set of Stan's Arch MK3 rims that have an internal width of 26mm (29.3mm external), and they were tested on Production Privée's steel-framed Shan N°5. The 140mm-travel 'Steel Banana' has to be one of the best and easiest cornering machines on the market right now, a fact that makes it a fitting steed to use as a tire-review sled. Unlike the speedy but slippery Trail Taker tire that I reviewed back in May, the Flow Snap seated up instantly and didn't bleed any air or sealant through their sidewalls.

Conditions were, predictably, wet and wetter given that it's late-fall in southwestern British Columbia, although a few dry days were snuck in as well. 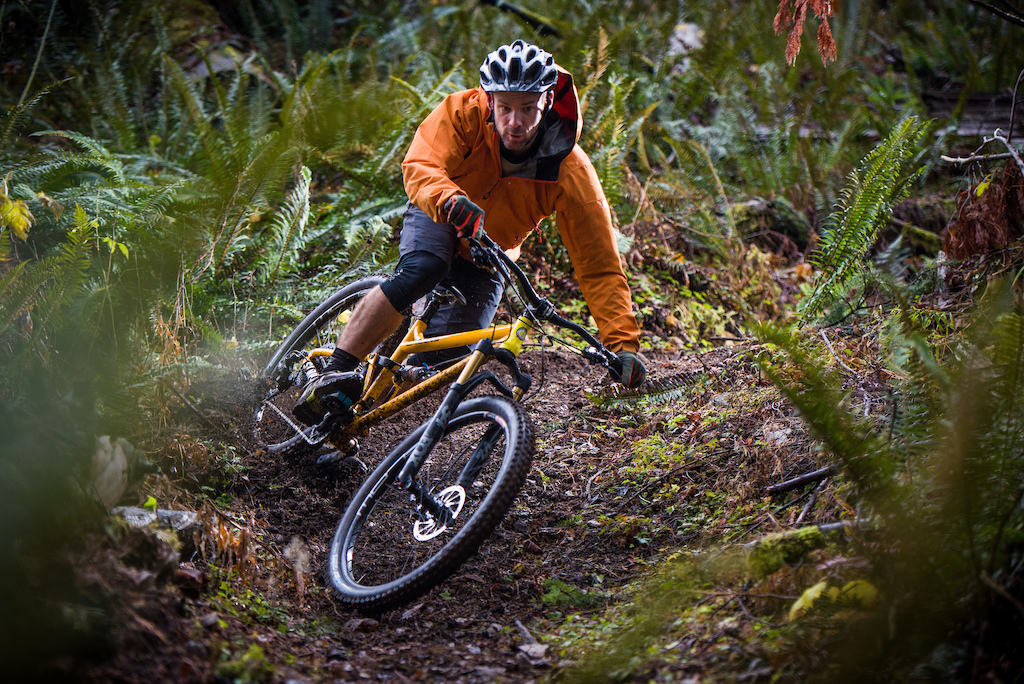 The Flow Snap's mid-weight Enduro Core casing is quite stiff and sturdy, more so than what you'll find on tires in the 800-gram range (a common weight for this size of tire), and that allows for some relatively low pressures for a 2.35'' wide tire on a 26mm (internal) rim width. In the wet, a low 18 psi was required to get enough forgiveness out of the casing and also provide some added traction, but a few more psi was needed when things dried out and the speed picked up. Support is adequate, with no excessive casing flex at those pressures, although they could feel a bit unforgiving if you went a bit too high in the opposite direction; the ideal pressure window for the Flow Snap might be a bit tighter than other "polyvalent" tires.

Despite the open central channel, the tire actually rolls relatively well given its intentions, something that's probably down to the ramped leading edges on the lugs and a weirdly hard feeling compound down the middle of the Flow Snap. The 54a durometer rubber feels like it's actually a pencil eraser that's been left in the freezer, and while that does contribute to decent trail speed, it doesn't exactly inspire confidence, or forward motion, when crossing over slimy roots. While fine in the dry, the rear tire constantly spun on anything shiny and wet, although they do a decent job of clearing mud out from between the lugs. Braking, both when upright and leaned over, is on par with a tire of the Snap's intention. 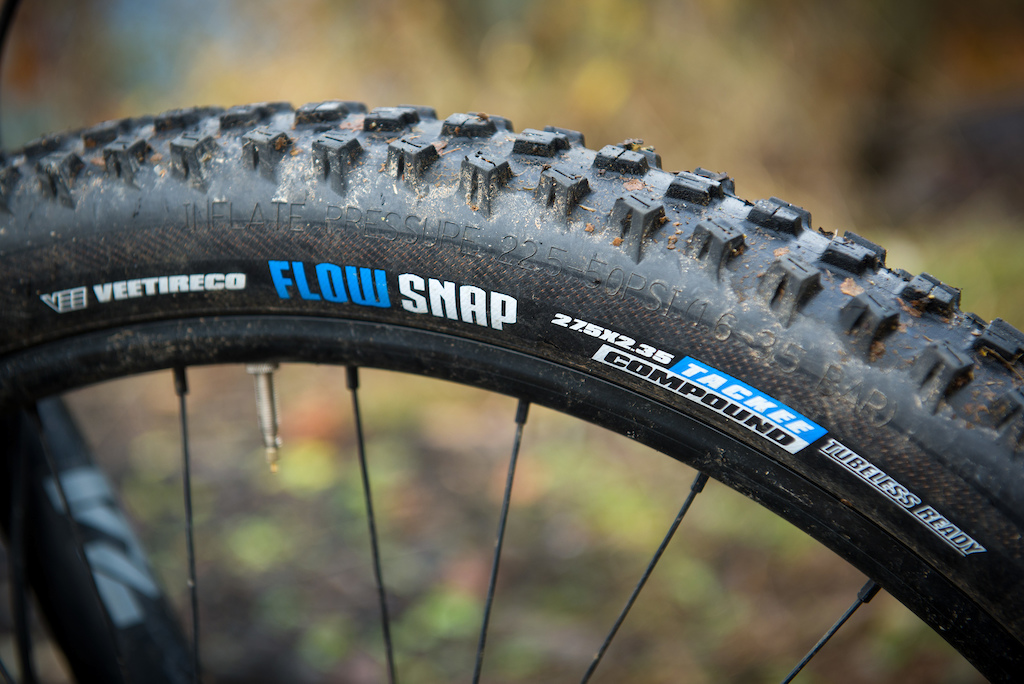 There are a ton of tires out there with a dual compound make-up, but the difference between the two rubber compounds used to build the Flow Snap is the most pronounced that I've ever seen. It also might be why these things perform so well in the corners. Leaning the bike over, the front and rear tires grab ahold of the ground like me grabbing the last Halloween candy bar, and both ends hold on well and without surprises. The interesting thing here is that the Flow Snap doesn't seem to give a damn what condition the dirt is in, just so long as it's dirt and not wood of any kind. The transition from upright to leaned over is also without surprise, and the angled cornering lugs seem to let go gently when the time does come rather than smacking you upside the head with a drift when you're not expecting it.

If you use your fingernail to push into the outer and inner edges of a cornering lug, you'll notice that the former feels quite soft and slow, while the latter is much stiffer; this likely provides support while also letting the leg conform to whatever it's touching.

As well as the Flow Snap tire does in the corners, its longevity matches its wet-weather performance, which is to say that neither are great. After just eight or nine rides, most in muddy, slow dirt, the Flow Snap is showing a surprising amount of wear. It's not along the crown where you'd expect it, however, with the hard rubber compound clearly doing its job there. Instead, many of the cornering lugs are missing their tops, at least where the softer rubber compound has been used. Given that it's wetter than the inside of an otter's pocket, I'm surprised at the amount of wear that's present after less than ten rides. They've been reliable, however, with not a single flat tire to report.

I don’t care about your opinions

hampsteadbandit (Nov 22, 2017 at 22:34)
@gooutsidetoday: Vee Rubber Corporation could be considered a "minor player" in the high end MTB tire market, but globally?


25 million tires produced every year, by 4,000 employees. Lots of OE contract work and rebadging for "brands".

teethgrinder (Nov 23, 2017 at 10:38)
@WasatchEnduro: Opinions are like arse holes. Everyone likes sticking their finger in one.

Bustacrimes (Nov 24, 2017 at 10:25)
yeah, how can you pay attention to two things at once ,when one of them is drinking the Kool aid from a brand whos best colourways are nicked from road bikes.

Buggyr333 (Nov 22, 2017 at 9:17)
I've got some Vee tire semi slick 27.5x2.35 tires on my commuter and they're pretty awful. Had them for less than half a year and they're already showing dry-rot cracking. They're consistently sweating sealant despite being "tubeless ready" and they are nowhere close to size, measuring at 2.2"

slimjim1 (Nov 23, 2017 at 3:07)
Those Michelin Wild AM's are amazing. Running one up front now and blown away by the cornering grip/rolling speed tradeoff they offer (better than any maxxis i've tried, nobby nics, purgs etc)

carym (Nov 22, 2017 at 9:06)
Bought a set of their downhill tires from Vee at Sea Otter a couple of years ago. 1/2 day on them and half the knobs were torn off anc miserable traction even before the knobs tore off. Never again.

mikelevy Mod Plus (Nov 22, 2017 at 20:15)
Nope, not necessarily. Rider weight, riding style, and terrain all count. There's a slow, technical trail here that I can get away with 17psi, and that's ideal for that particular trail. That low pressure on a few other local trails would see me eating dirt, though. I'm around 160lbs, too, so more weight = more air.

pinnityafairy (Nov 22, 2017 at 8:21)
There is a vee rubber tire that I absolutely love on the rear of my bike. The only problem is if I start riding aggressively it always goes flat. I do love your tires I just wish they would hold air V rubber.

ompete (Nov 22, 2017 at 13:18)
I want all tyre manufacturers to put the ‘direction’ Arrow in fluorescent green, so I don’t have to search for it, when fitting my new rubber in bad light!!

theberminator (Nov 22, 2017 at 9:54)
Iv had the vee rubber flued on for about a year ,the muti compund tyre,id say they are good in dry loose shail gravely conditions,in the wet not that good considering thay are called flued,I brought them thinking thay were a wet tyres,ok for 20 quid each but not in the 35 quid range that thay are meant to contend in.

headshot (Nov 23, 2017 at 2:25)
My primary concern with tyres is whether they will work well and inspire confidence as either a rear or front tyre. I am far more concerned about front tyre performance than the rear primarily because a rear slide is usually far easier to deal with whereas a front slide can result in a swift hard crash and broken collar bones.. It would be good if tyre reviews focused more on this aspect. Often its not clear which end the tyre lacked grip.

Just looking at the tread pattern on this tyre makes me nervous. It would probably be fine as a rear tyre, but as a front tyre with weak looking edging knobs I have no doubt it would be a disaster as an all conditions #enduro tyre.

VwHarman (Nov 22, 2017 at 15:56)
Im up here in the great white north and kind of thought they had named a tire after my chosen winter past-time..The Snow Fap.

monsterville (Nov 27, 2017 at 14:28)
Pinkbike sure seems a lot more willing to criticize smaller players than the ones paying their bills.

Trade for a six pack of beer and a twin pack of sharpies.

I also did my Rampage runs with Vee tire.

RimCyclery (Nov 22, 2017 at 10:30)
I put a 26 by 3.5 speedster on my (modified) Karate Monkey, and love it! tough sidewalls and the recessed tread pattern hooks up when I want it to and drifts like the dukes of hazzard running from Boss Hog. Still waiting for the "sample" tires they said they would send out after InterBike. Look on their website. They are actually one of the largest tire producers.

sinister28 (Nov 24, 2017 at 7:15)
Anyone else not really give a shit about tire reviews being done in hero dirt where every tire works well?

DarrylJohnston (Nov 22, 2017 at 14:48)
My tires beat the shit outa those weakling XC rider ripoffs.
Below threshold threads are hidden