After 5 years and 2 of his 3 Rampage titles, Kurt Sorge has today announced he is leaving Polygon Bikes and joining Evil bikes instead. The freerider from Nelson, BC, will join Evil's Black Collar program alongside Austin Warren, Paul Genovese and fellow Rampage competitors Kyle Norbraten and Graham Agassiz. The full release from Evil is below: 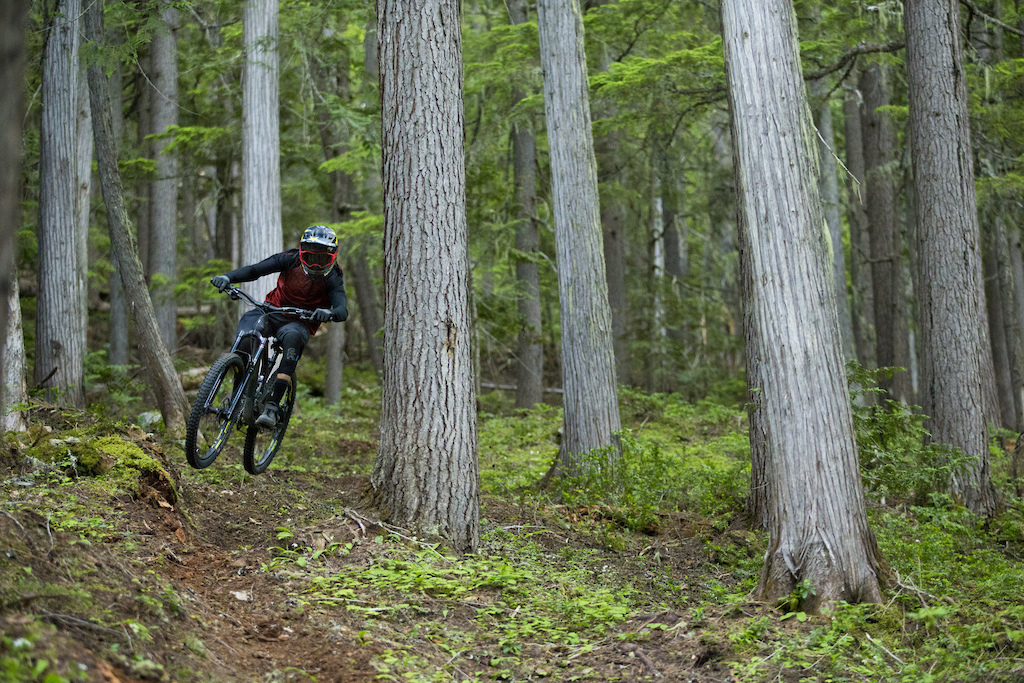 Evil hearts hardworking freeride. That’s no secret. Strong hearts and quiet confidence. Get the job done while always putting joy on two wheels front and center. With the Black Collars, we’ve built a formidable team of riders born from the dirt and raised with grit. We don’t mean chasing Instagram likes or winning World Cups. We mean living and breathing bikes, building trails, party laps, crash-and-burn-and-get-back-up-again freeride spirit. With that in mind, we are proud to announce an addition to Evil’s Black Collars team of derelicts. An icon in mountain biking’s working class, the newest to join the union is an old name in freeride: Kurt Sorge.

“I first met Sorge on a snowboarding trip to Baldface up near Nelson B.C.” says Evil founder, Kevin Walsh. “He works hard at having fun and is the personification of down and dirty freeride and a perfect fit for the Black Collars.”

Sorge’s credentials are well known. In the history of Rampage—mountain biking’s preeminent freeriding competition—the Nelson, B.C. rider has gained more elevation on the podium than any other rider, owning three victories and a second-place finish, every one of them ridden at full tilt and punctuated with big, tricked-out airs at speed. But that’s just how Sorge rides…every day. “Hoff”, as he’s known to friends and fans alike, hails from deep in the Kootenays—Canada’s other, other freeride origin story. Homegrown from weed and forestry, the Koots have produced a mountain of freeriding’s biggest names, with Sorge still sitting on top of that hallowed peak. The relationship between Evil and Sorge has been a long time coming.

“Evil was always a brand I was interested in,” recalls Sorge from his home near Nelson, B.C. “When I first met Kevin, he was so passionate about Evil. After our snowboard trip, we went to the Cantina in Nelson, drank margs, and he told me how the bikes worked. We stayed in touch over the years, and eventually it clicked.”

At 32, Sorge is already an undisputed legend of the sport, and is still pioneering lines untouched by the hand of man alongside his brother-from-another-mother and fellow Black Collar, Graham Agassiz. With Aggy and the rest of the Black Collars, you can expect to meet Sorge on trails and tailgates throughout the Pacific Northwest. Sorge will be running multiple Evil whips, including the Wreckoning, and Calling.

“For most riders—who aren’t racers—what they should be on is a playful bike, a bike with some pop.” says Sorge. “And that’s what Evils are. Suspension designed for every kind of rider, from riders just getting into mountain biking to guys like Aggy and I. I’m just so stoked to be part of the team.”

Welcome to the first day on the job, Kurt. We know you’ll do good things. 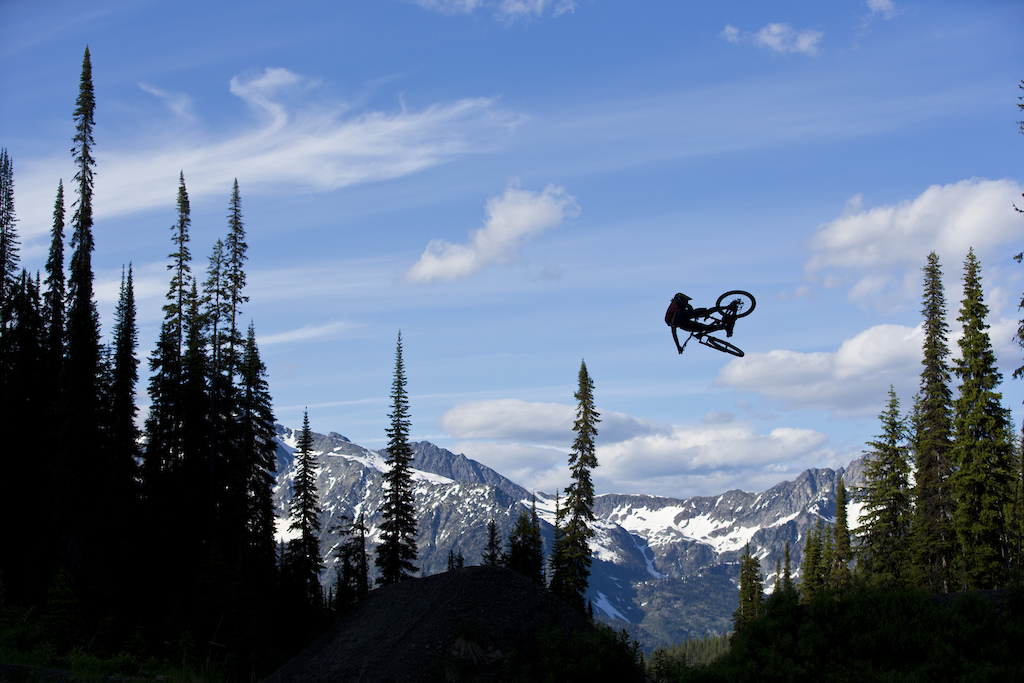 mateo5 (Aug 11, 2020 at 14:06)
Hahah made me chuckle! But to be fair this new Wrecker is practically a DH/freeride bike! U can put a dual crown fork up to 200mm I think, and has DH stiffness in the rear. If it's enough for Sorge and Aggy in Rampage it's probably enough for anybody!

And to the point of this article, I'm really glad for Sorge!!! And Evil's trail bikes haha..

ornorton (Aug 11, 2020 at 15:40)
Why so caught up on what category of bike evil and other manufacturers make? Bikes these days have such a broad application and cross over that “defining” them as an x bike or y bike seems obsolete to me.

Lloydmeister (Aug 11, 2020 at 18:51)
Haha, @brianpark so wants to use this for comment gold but knows that he just cant because we will all have a field day

skills25 (Aug 12, 2020 at 9:47)
The wreckoning is a DH bike. I think the line gets blurred when people talk about DH bikes vs DH Race bikes... The Wreckoning IS a full-on DH bike when it is set up as one. Just because you can pedal it doesn't mean it isn't one. But, it isn't a DH race bike, which may be what some people get caught up on. A Canyon Sender, YT Tues, Pivot Phoenix, etc, those are all DH race bikes, not freeride bikes. Evil doesn't have a race team. They have free-riders and big senders, so IMO it is all on-brand!

When did winning world cups mean people weren't down to earth and have any grit or live and breathe bikes? Kind of a weird statement... I just find it odd that a brand that started out in WC racing eschew's it so much now and doesn't even make a DH bike.

WasatchEnduro (Aug 11, 2020 at 9:54)
The brospeak in this announcement was painful and hard to get through.

gramboh (Aug 11, 2020 at 10:20)
And talking as if WCDH guys don't ever build trails. Heard of the Athertons? Or some of the guys on the island doing work at Prevost? Cypress on the North Shore?

Walsh is not saying winning world cups is bad, he is saying they(Evil) don't intend chasing likes or WC wins (nowadays at least), then he says what they (evil & riders) like; "breathing bikes, building trails, party laps, crash-and-burn-and-get-back-up-again freeride spirit.".. And to be fair I get all the talk about freeride 'cause they've signed Norbs, Aggy, and now Sorge for gods sake haha! No racers.

Again, I do agree the choice of words and how it's written is off putting but common, it's best not to hate haha!

andyooo (Aug 12, 2020 at 0:51)
Nigel: The numbers all go to eleven. Look, right across the board, eleven, eleven, eleven and…
Marty: Oh, I see. And most bros go up to ten?
Nigel: Exactly.
Marty: Does that mean it’s radder? Is it any sicker?
Nigel: Well, it’s one radder, isn’t it? It’s not ten. You see, most bros, you know, will be shredding at ten. You’re on ten here, all the way up, all the way up, all the way up, you’re on ten on your Evil. Where can you go from there? Where?
Marty: I don’t know.
Nigel: Nowhere. Exactly. What we do is, if we need that extra push over the cliff, you know what we do?
Marty: Put it up to eleven.
Nigel: Eleven. Exactly. One radder.

usedbikestuff (Aug 12, 2020 at 9:49)
I like how evil shit on their main form of reaching their customers. Instagram. You guys had better go out there and live bike life and not post for a while or this statement is marketing bullshit

When Evil’s Black Collar marketing campaign first launched and they made a point to highlight that all their athletes are ‘just normal dudes’ who all have other jobs/careers but are also really exceptional at bikes, they lost me.

It came across as we don’t actually support our athletes enough that they can focus on their craft full-time, but rather they have to work two jobs to make ends meet.

Just some food for thought that has been in my craw for a while now. It maybe just poor marketing and they provide as much support as other companies, but either way probably time to re-think the strategy.

DirtyHal (Aug 11, 2020 at 13:08)
It's funny you say this. After I made my comment above I actually talked to a buddy of mine who said that Evil recently fired a lot of its long term employees to increase profit margins for new investors. This is just scuttlebutt but if true it's pretty sad, bikes are booming right now so you would think they would be expanding.

DHhack (Aug 11, 2020 at 14:57)
@DirtyHal: they seem to be on deaths door. Going direct, never having stuff in stock, odd rumors always floating about. DW took a bath (hopefully not his money) on the Robot and the Trust stuff and Walsh is just.... Walsh. Went from being the brand with the bike to an afterthought in what, two years? Three?

thejake (Aug 11, 2020 at 16:45)
@DHhack: no one seems to have anything in stock, and not just in the bike world. COVID is messing up supply chains across all industries.

usedbikestuff (Aug 12, 2020 at 9:46)
Livable wage and free ride do not go together. Save for a select few riders, you need a multitude of sponsorships to make a living wage. Energy drink sponsorships removed, that’s quite a tall order.

Look at it from the brand’s side. Is Kurt going to sell enough bikes to offset that cost? No. Brutal truth is Pinkbike reviews will do more to influence someone’s decision process than Kurt would. Influencers are cheap. Flood the market with compensated reviews that are just people talking about the product that you as the company can write off for cost is a lot better deal. What is livable? If he wants to be in Vancouver or kamloops, that’s a big price difference on what is livable wage.

dungeonbeast (Aug 12, 2020 at 11:14)
@usedbikestuff: I understand the economics of niche industries. I also think a lot of companies skimp out on paying their athletes fairly because they can get away with it. Everyone else pays peanuts, so can we. I just think it’s poor optics/marketing to run a press release that essentially says “our entire team has to work two jobs to make ends meet” while then turning around and asking consumers to drop $5000+ on one of their bikes.

I would hazard to guess that if they really wanted to Evil could pay Kurt and Aggy enough to get most of the way to a live able wage. (Maybe they do now, and if so, good for them)

jasperwesselman (Aug 12, 2020 at 14:55)
@dungeonbeast: You're right. Freeride is highly driven by patronage from generous brands and individuals and there is nothing wrong with that. The riders who give everything to it and become well rounded professional athletes and spokespeople. In some cases have multiple six figure salaries. With very little value add in return. Just as an artist may be supported by a patron for the sake of art.

Waldon83 (Aug 11, 2020 at 14:35)
Like thanking Toyota for that Prius they gave you for doing an advert, then driving it straight to Toyota and picking up a new Tacoma with the cheque.

Glenngineer (Aug 11, 2020 at 13:25)
I had an Imperial, love my Chamois Hagar and am pretty tempted by the latest Following, but damn Evil's marketing copy and overall image just kill me, and it seems like it gets worse every year. I'm also not convinced on the quality front...

Victoriamike (Aug 11, 2020 at 12:01)
@flipoffthemonkeys: immanuel kant was a real piss ant who was very rarely stable

RCorlett (Aug 11, 2020 at 10:23)
He is a shredder on a bike, but makes his money as an industrial designer. He is on Evil's payroll doing design work. After geometry and suspension design are sorted he is likely the guy that makes it all come together. Probably the one behind the new sharp lines on the updated Wreckoning and Following.

giantwhip (Aug 11, 2020 at 10:53)
Steve Smith made Evil popular. They need to release a signature DH frame with the proceeds going to his bike part

taldfind (Aug 11, 2020 at 15:57)
@N-60: When watching the highlights for that year to find the answer to your question I did see a rider on a single crown Kona. And memories have a funny way of copy and pasting from our past sometimes. Heaven knows mine messes up all the time