Year after year, the 4X ProTour race in Fort William continues to showcase everything that is great about 4X. The track, the crowds, the atmosphere. Everything about this race is incredible, and on Saturday night, the crowd were treated to some of the best 4X racing ever seen in the highlands of Scotland.

Saturday 6th June, saw the 2015 4X ProTour roll into Fort William, Scotland for round 2 of the 2015 tour. The iconic 4X venue in Scotland has seen some of the most spectacular 4X races in history and in 2015, there would be plenty more drama...

The weather was the talking point all week. The forecast had predicted rain, but what arrived during the course of the week and weekend was terrible and gave the riders and spectators tough conditions for practice and qualifying.

The track had been prepared by Duncan Ferris, one of the UK's top 4X riders and when we arrived everything looked ready for racing. With practice sessions on Thursday and Friday ahead of qualifying on Friday night, the riders were getting the track dialled and as the gate dropped for qualifying, it was time for the weekend to really start.

QUALIFICATIONS
In the women's, it was Round 1 winner Helene Fruhwirth who continued where she left off in Winterberg two weeks ago - taking the fastest qualifying time ahead of the UK's Natasha Bradley and Rebecca Baraona in third.

With the rain starting just before the men qualified, the track became pretty slippery, but like in the women's it was round 1 winner - Quentin Derbier, who set the fastest time ahead of Lewis Lacey and 2014 4X World Champion Joost Wichman.

THE FINALS
On Saturday, the forecast was for rain and wind. It was worse than that! It was a horrible day, but the crowds turned out in their thousands to watch the 4X ProTour finals. With the World Cup DH qualifying cancelled due to the strong wind, it was down to the 4X ProTour to provide all the race entertainment on Saturday and it did not disappoint.

So it was finals time. In the women's small final it was Becci Skelton who rode a perfect lap, taking the win and booking her place on the podium with 5th overall on the day. In the women's main final, Helene Fruhwirth took gate 1, Natasha Bradley in 2, Rebecca Baraona in 3 and Julia Lackas on 4. The gate dropped and Fruhwirth had the lead into turn 1 but with a great move on the second straight, Bradley took the lead. The home crowd went wild! Through the rocks Bradley was clearly under pressure - in only her third ever 4X event but onto the last straight and she held it together to take an incredible win over the 2014 4X ProTour Champion Fruhwirth with Germany's Julia Lackas in 3rd and Baraona in 4th. 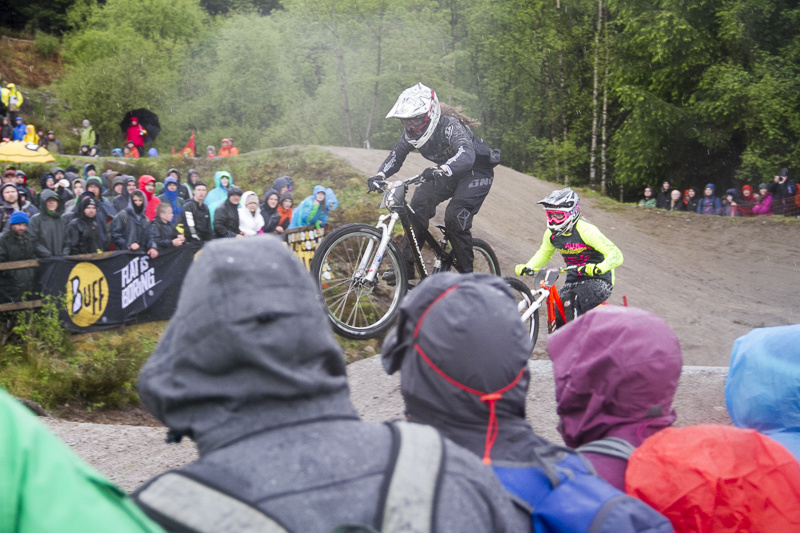 In her third ever 4X and unsponsored, Natasha Bradley took the win in an action-packed final. 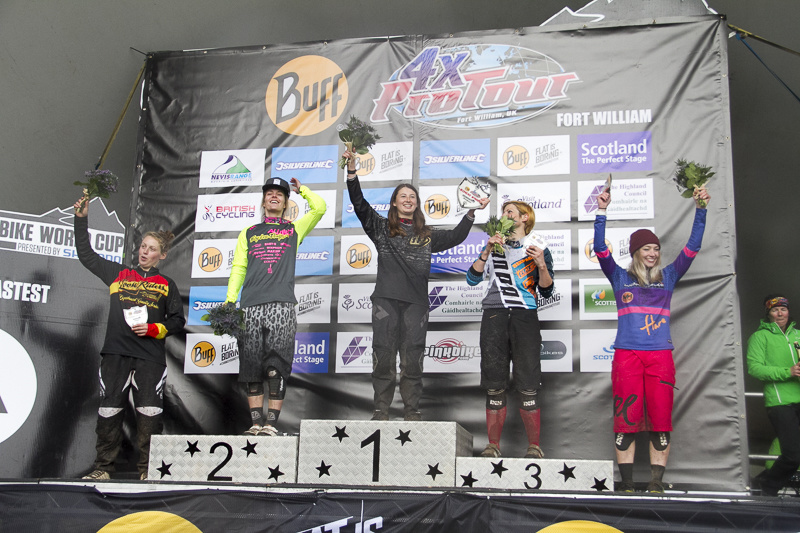 It was then time for the men's main final.Lewis Lacey took gate 1, Joost Wichman took 2, Slavik in 3 and Beaumont in 4. The gate dropped and Wichman won the drag race to turn 1. Beaumont - like his semi final though was carrying a lot of speed and on the exit of turn 1, he swooped around the outside taking the lead. The British crowd went berserk. Entering the rocks Beaumont was still leading with Wichman close behind. Down over the table, Wichman got close then it all happened in the final turn. Both jumping the huge triple, Wichman dived inside and somehow made his tyres bite! On the exit of the turn Wichman moved into the lead and on the drag race to the finish line, Wichman took it from Beaumont, Lacey and Slavik. Wichman was ecstatic, Beaumont was so close to the win but the real winner without a doubt was the sport of 4X. This final had everyone in the arena screaming, crowds on track cheering and everyone was on the edge of their seat. With clean passing all the way down the track this was the showcase of 4X yet again in Fort William. 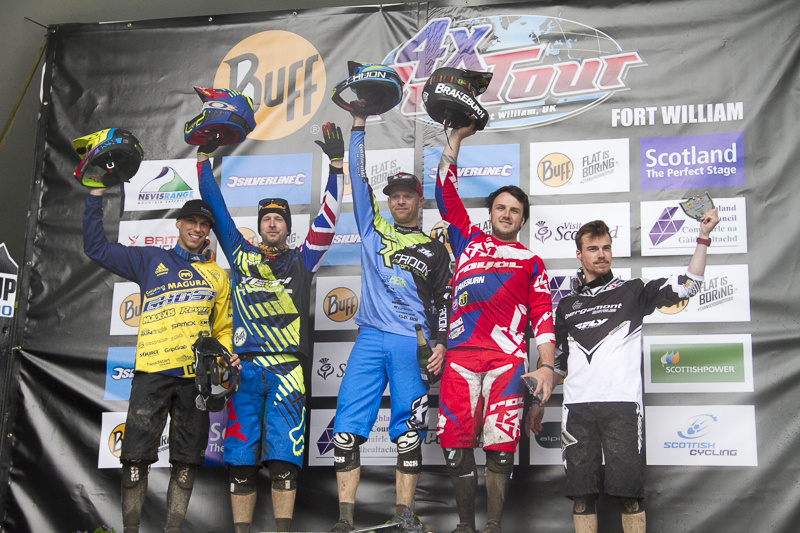 The riders headed over to the podium for the celebrations, with champagne corks popping, the crowd cheering for all the riders on the podium, this was another fantastic 4X ProTour race in the record books.

The 4X ProTour now moves on to Poland for Round 3 in Szczawno Zdroj on 18 July. This is one race not to miss. Set in the heart of Szczawno, the town is a huge supporter of 4X and the world's best riders will once again take to the track under floodlights to see who will take the wins.

tobiusmaximum (Jun 10, 2015 at 5:14)
Clearly that was worthy of a neg then. I'm so confused by neggers. There really is no way to keep them happy (duh?!). Speak up oh silent harbinger of negativity... For I know not what I have done.

DownVoteGawd (Jun 10, 2015 at 4:27) (Below Threshold)
1:44-1:50 Must have been short on clips. ESPN shows highlights of all brick shots from basketball games too…-__- and PINKBIKE IS STILL USING YOUR INFORMATION WITHOUT YOUR PERMISSION EVERYONE

tobiusmaximum (Jun 10, 2015 at 4:59)
It ticks so many boxes it's hard to understand why the UCI bailed on it. Not that we need them, as this sorta suggests. Also seems like a good discipline for the Uk, and anywhere else slightly lacking in height above sea-level.

tobiusmaximum (Jun 10, 2015 at 4:58)
Joost? 'Squeezed'? Lol.. Was that intentional? I love his name, always thought it sounded like a cheap european fruit drink

peanutbuter (Jun 10, 2015 at 7:57)
what a nice guy apologizing for winning if only all sports where like that

alexhyland (Jun 10, 2015 at 7:35)
4x is such a wicked exciting race format. And this is an ultra populist comment on here, but UCI ditching it in favour of XCE says a whole lot. Also, how nice a guy is Joost Wichman. I don't think I've ever seen someone so magnanimous in victory.

brooce (Jun 10, 2015 at 8:14)
Amazing event, amazing track! I've been there without a bike once, and videos can't show how rough this track is! Steep, huge and full of stones, one of the most hardcore tracks on Protour I guess... doesn't look much better than JBC.

garrettstories (Jun 10, 2015 at 13:46)
Just when I thought I had pretty good bike handling skills I watched this video. Back to the drawing board. Another great piece by Lars.

theminsta (Jun 10, 2015 at 7:50)
I wonder when 4X will happen around where I am. These tracks look soooooo fun minus the rain and slick