Video: 77designz Takes their Prototype to the Lab for Fatigue & Load Tests


In this episode we develop a bike frame, Giacomo from 77designz takes you to the EFBE lab in Waltrop. The task of EFBE is to carry out fatigue tests and thus to contribute to product safety. EFBE simulates the entire life of a bicycle frame in a very short time introducing lots of load cases and cycles into the frame.

We decided to have the Kavenz VHP16 tested on downhill level as we don´t see a clear difference between Downhill and Enduro Racing any longer. Enduro Racing became crazy hard and comes naturally with more mistakes as the rider can't memorize all of the details of the track.

The test consists of 8 test rigs and complies with ASTMF2043 category 5: 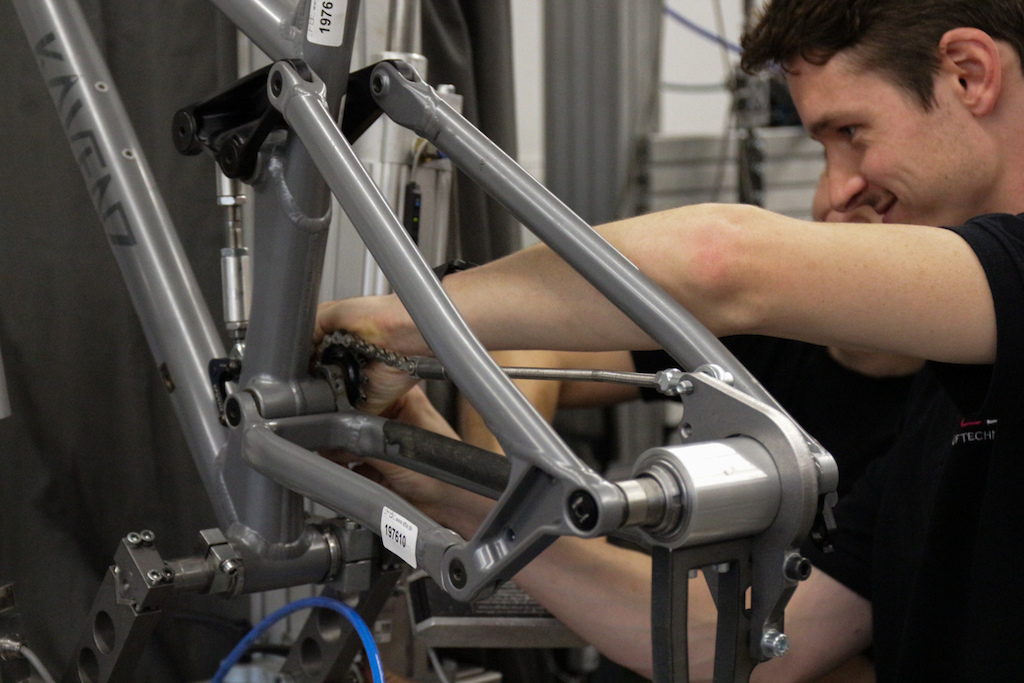 Our EFBE TRI-TEST® is the reference in bicycle testing, and goes far beyond the tests prescribed in the existing standards. Each test program is built from the three modules fatigue tests, maximum load tests and overload test in various load cases, all of which together replicate the stresses of a whole bicycle life. A frame must undergo a minimum of five and up to eight different test stages, in order to be awarded the EFBE TRI-TEST® seal. 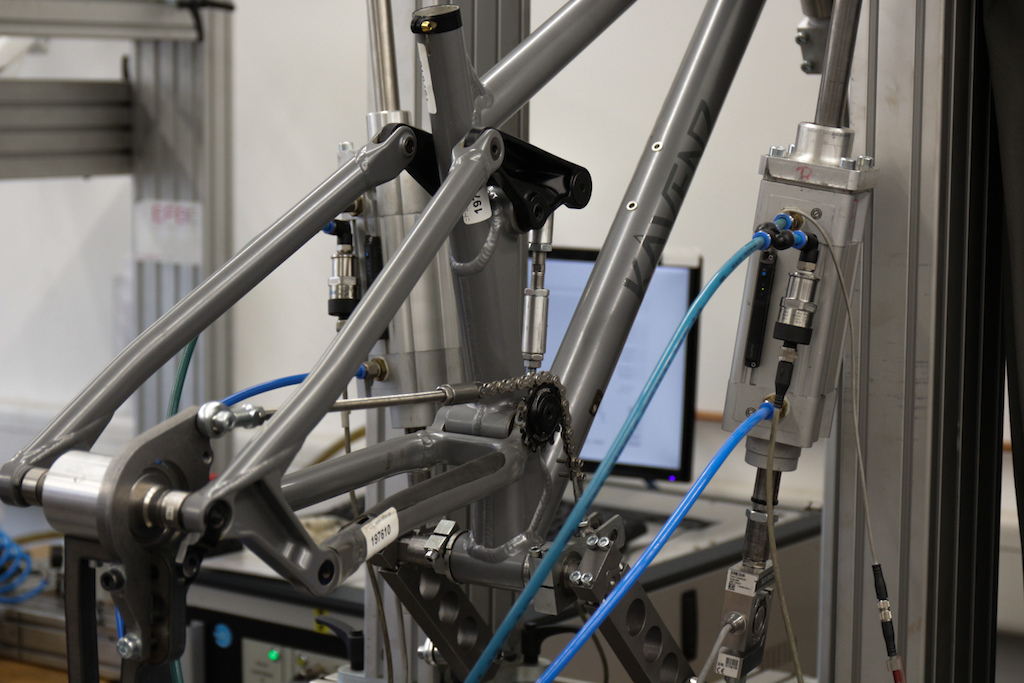 The EFBE team is doing an extremely important job. Because they ensure every day that products are getting better and the risk for the user gets minimized. Unfortunately, we did not manage to pass all the exams with our Kavenz frame at the first attempt. Despite the initial disappointment, we are grateful that there are instances like EFBE that strive for product safety. In the long term, they help us to bring a reliable product to the market. This benefits our future customers and us as a business, as failures in the field are not only expensive but also dangerous. So we clearly see it as a chance for further improvements of our product before market launch.

After the video was finished, we continued the test with a second chainstay. Here we were able to pass a few tests and gather more important information. Now we bundle these findings and work with high pressure on the V3 of the Kavenz VHP16 which will then hopefully pass all the stages of the test.

Here is a Bike Check video from the Megavalanche in Alpe d'Huez where Giacomo finished second in the Challenger class. Of course, the good result clearly confirms for us that we are on the right path.


What does the test result mean for the timeline?

This throws us back by about 2 months, but we are currently still positive that we can finish testing by the end of October. If that works, we are planning to accept orders from November and deliver the first frames right on time for the start of the next season.

fattyheadshok (Sep 11, 2019 at 4:59)
Wow, really great in depth content here. Makes me trust a company that goes to all this effort to make sure what they’re putting out is worth the money you’ll spend on it. Excellent job all around. Thanks PB for putting this out.

telephunke (Sep 11, 2019 at 3:00)
do you guys have any geometry and sizes proposed for the bike yet? reckon you need to think pretty carefully on that, especially seat tube angle and chainstay length etc. see the privateer bike comments. i for one reckon the extreme seat tube angles are going too far

Giacomo77 (Sep 11, 2019 at 3:09)
We have gatgered the most important informations about the project here: vhp16.kavenz.de/landing-page

GXMV (Sep 11, 2019 at 4:36)
Cranks are mentionned to be made by Cornelius @ Intend ; subtitles don't say it tho ... So I write it here. @Giacomo77 correct me if I misunderstood. Great looking bike. Tests sessions somewhere ? sometime ? (Please make it happen in Vallnord

ashleyren (Sep 12, 2019 at 0:20)
honest little documentary, respect for putting out the bad as well as the good news

fluider (Sep 12, 2019 at 2:48)
@Giacomo77 : Giacomo, thank you for publishing this video which shows your honest and passionate attitude to your project. I'm keeping fingers tightly crossed for you to keep the pace and progress of converting your hobby project into small batch boutique production which is daily dream of many riders.
Not being even an educated engineer nor welding proffesional, but I dare to recommend you to use much longer cross section for the welding. You designed a weld over cross section that is almost perpendicular to chainstay tube axis. I'd try cross section at some 45° to the tube's axis. And a square like tube profile as well, or rectangular oriented up-wards.

Not being even a machine testing proffesional, I dare to say my bold opinion that the test of pedal strokes was not designed correctly. The pedal is set at around 5 o'clock position, however if you see some "pedal torque efficiency" graphfs of biomechanics you know, that we produce peak force in the range of 3 o'clock and 4 o'clock after which our efficiency quickly drops. The force was applied not vertically but at an angle (imitating the side-to-side movement of mainframe while pedalling|). This makes pedal position even more significant in the test.
And one last note of my babble :-). The thick aluminium plate holding rear axle to the testing jig is probably much much stiffer than spoke laced 29" wheel on soft rubber tires.
Which leads me to think that after some modifications to your bicycle frame and testing procedure, you must be able to pass the 100.000 cycles.

Giacomo77 (Sep 13, 2019 at 2:52)
Thanks for your Feedback. I agree that the cross section for the weld must be longer and the yoke it self will exteded as well. Also I agree that the test rig is not 100% realistic but the guys do have some expertise and in real life this is exactly where the frame would brake. We are just getting the exact same feedback from the field testing.

EckNZ (Sep 11, 2019 at 0:49)
Can we have one in english too please? (should have paid more attention during my german classes at school!)

R-M-R (Oct 10, 2019 at 11:58)
If you're referring to the movement at the hub, that's because the fixed points are at the contact points of the tires, which I believe are ball joints.