During any race season, there will always be an element of adversity that rolls into a racers’ path. It can crop any number of ways, whether in their training, at an event, or life making either difficult. To perform well, racers benefit from being adaptable in how they deal with the unforeseen circumstances that can and inevitably will come their way.

In 2020, the world has been dealt with a massive change that’s brought this adversity to the front of coaches’ and athlete's minds. Entire off-season’s spent training has been altered thanks to Covid-19 arriving right when most racers were preparing to hit their first peak. How individuals deal with the fallout will differ but one constant is that those who are more adaptable and resilient, have an added opportunity to excel. When the races kick off again, the athletes who do well will be those that took advantage of the extended off-season and continued bettering themselves. 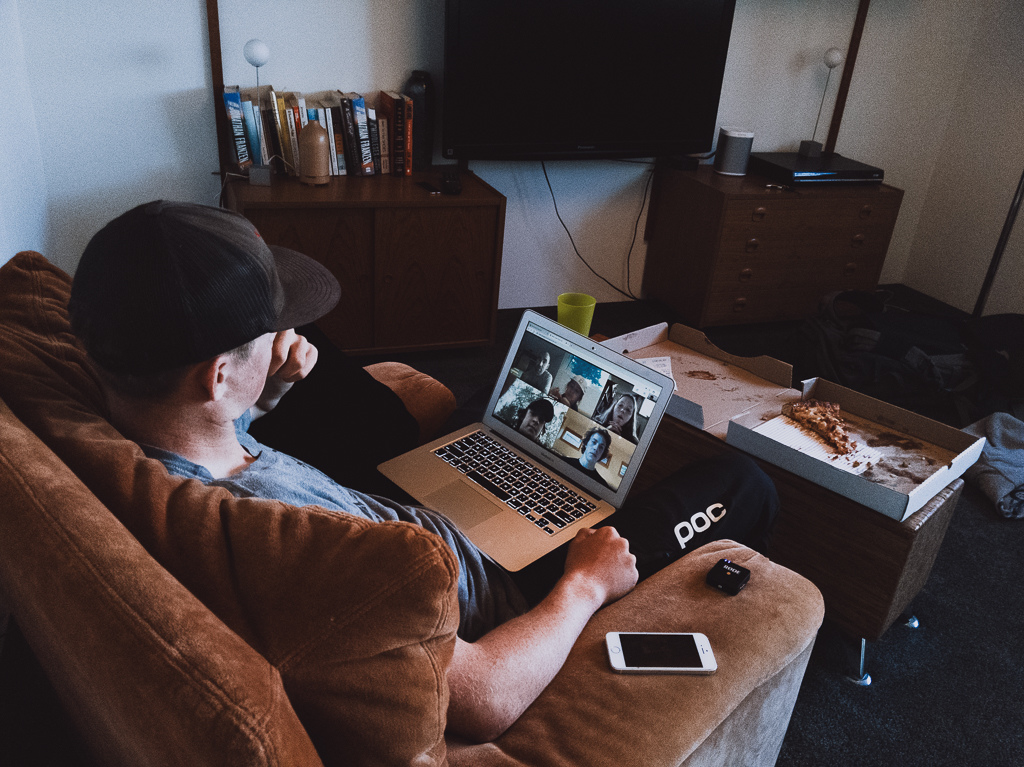 Emmett Hancock was about to begin his second season racing the Junior World Cup Downhill series. Instead, he's at home in Kelowna working five days a week while completing high school, continuing his training, and riding as much as he can. 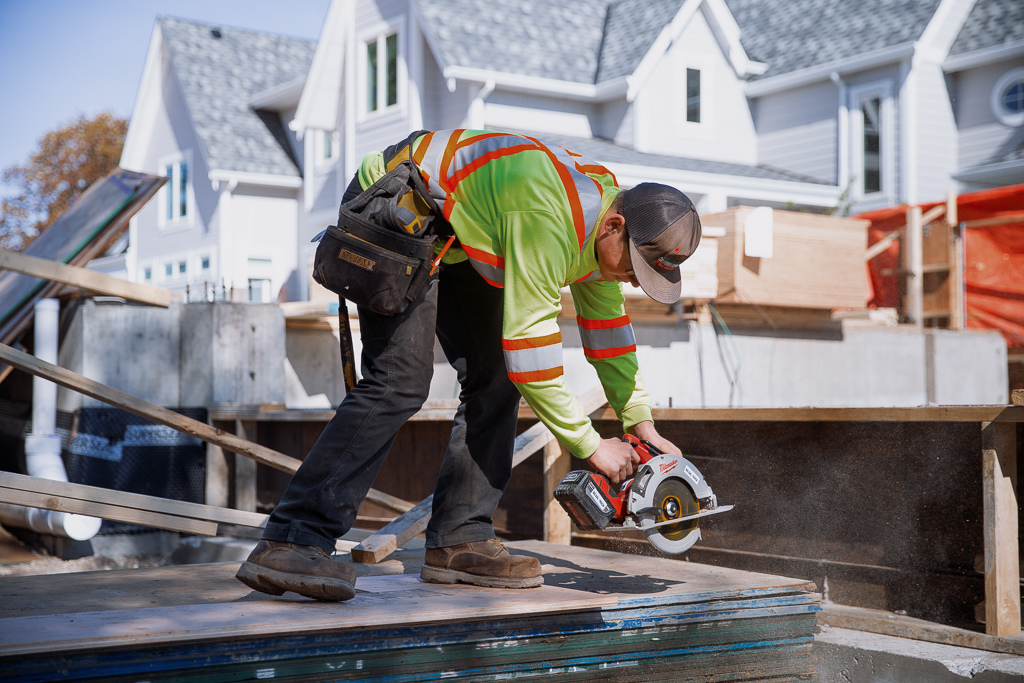 Emmett isn't shy of some hard work but he'd rather that be training in the gym and on the trails than behind power tools. 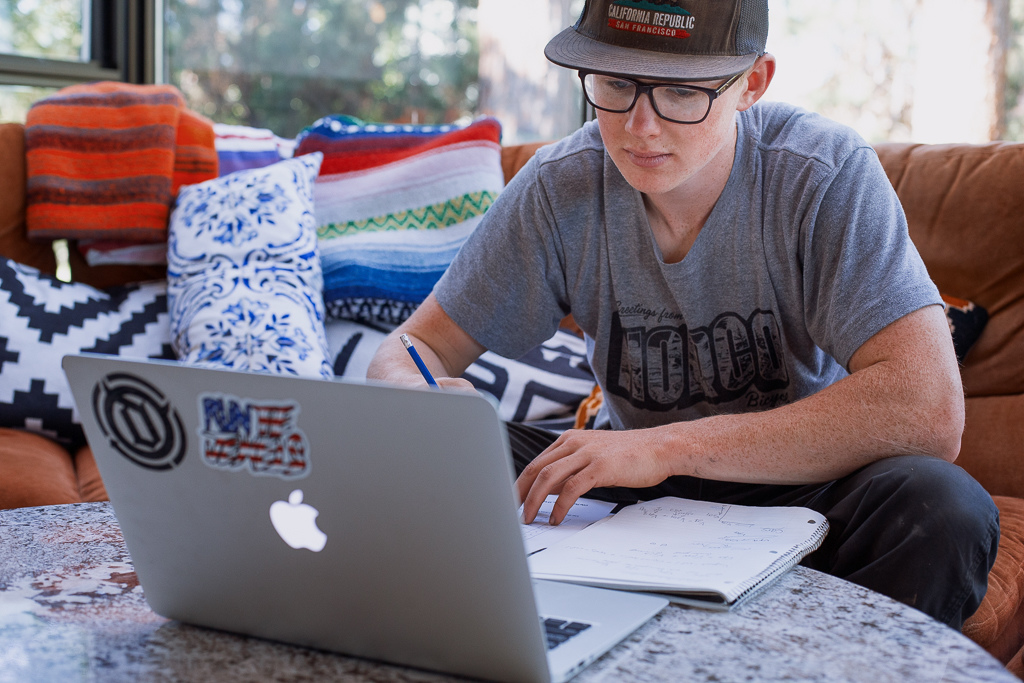 Finishing high school is another grind that Emmett has had to keep on top of and tends to spend weekends getting his work completed.
Like everyone planning for an event in 2020, the global pandemic has forced the Blueprint Racing team to switch things up. Group training sessions and team camps were cancelled as everyone remained close to home, instead, focusing on their own efforts. Trail and gym closures have further complicated preparations, underscoring the importance of adaptability. Coach Joel Harwood and the team continue to meet online and go over progress together but applying any of the advice as a group has been off the cards. 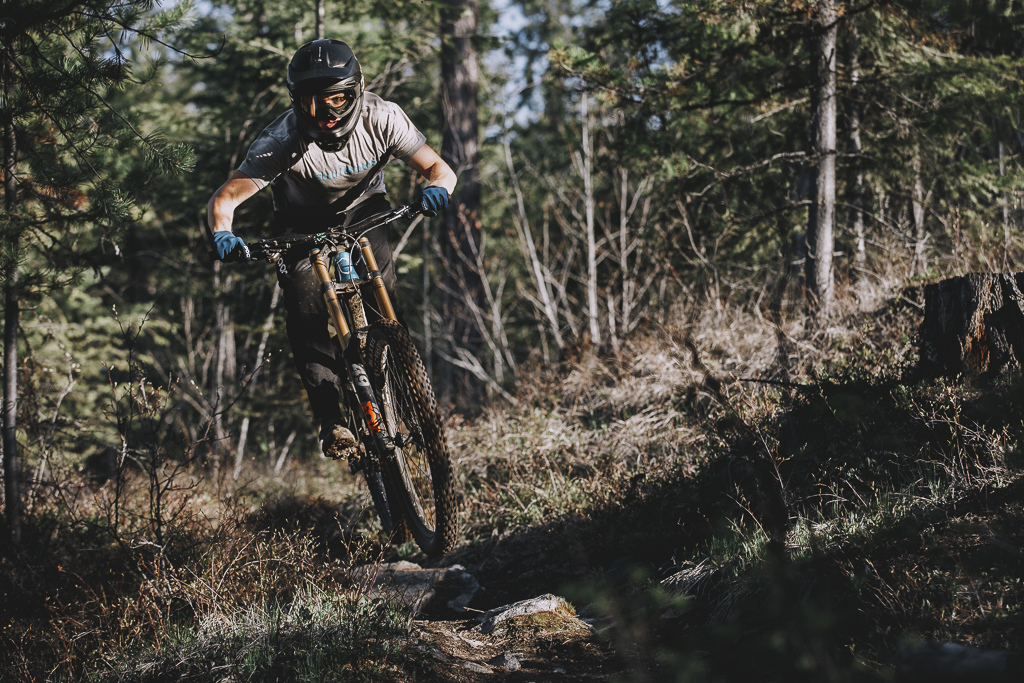 Emmett would prefer to spend more of his time on the DH bike but with no races yet and travel out of the question, he's been spending more time on his trail bike. 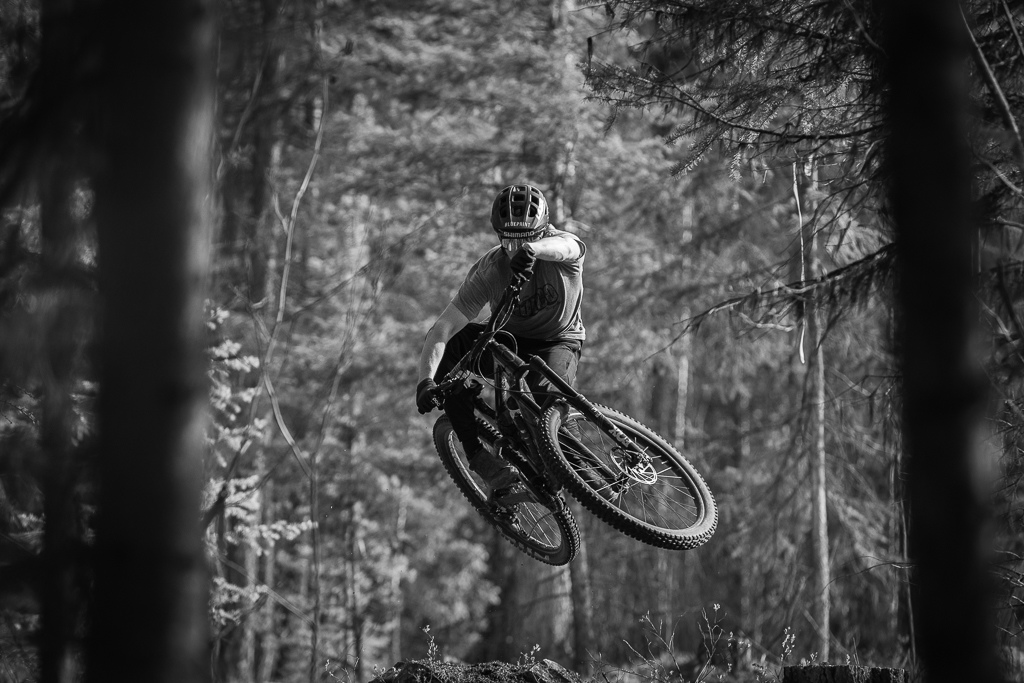 Today's trail bikes are plenty fun to ride too, especially when your team has access to the new Norco Sight. 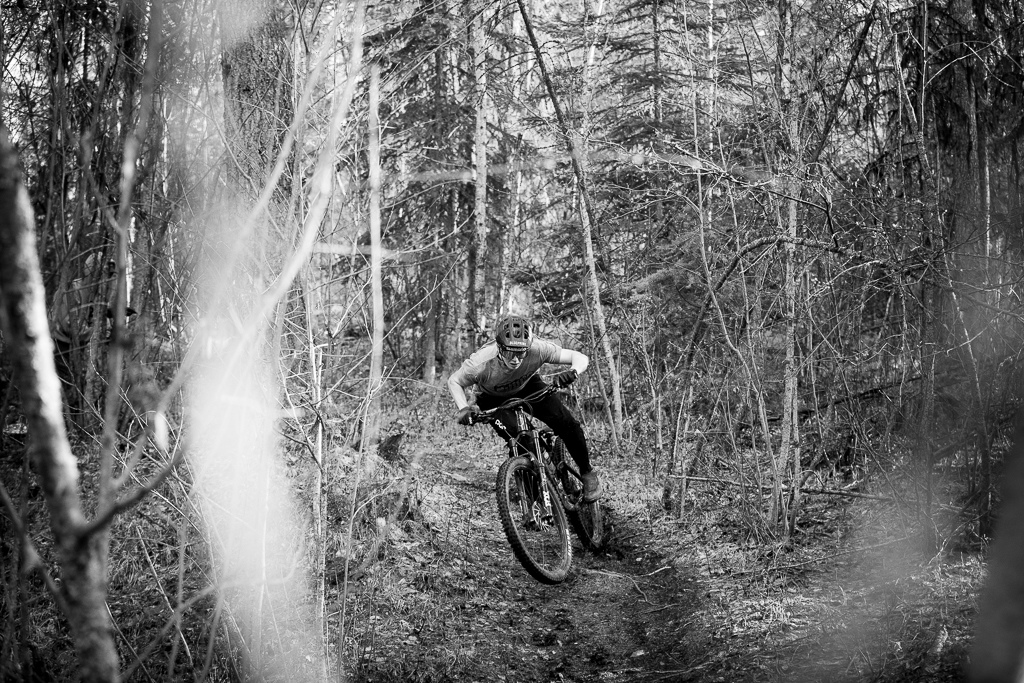 Emmett testing traction on his trail bike. The team continues to work on skill development to push their riding to the next step.
Team members are now trading racing for more school and work alongside their continued, restructured training for a relatively unknown extended period. Sure, with all the extra time they can ride their local trails much more but doing so without purpose isn’t going to help team members achieve their goals. If there's a compressed race season in 2020, the opportunities to learn, achieve and prove themselves have just been made far more difficult.

For Emmett Hancock, 2020 is his final year as a junior on the Downhill World Cup and a critical one for his future. When he was supposed to be racing the second World Cup of the year, Emmett found himself riding his home trails while working on this video project. He’s working in the building industry, continuing to train with a reworked program, and is still completing his high school education. With 2019 being an eye-opening experience, Emmett has been looking forward to 2020 and applying what he learnt. The compressed format being proposed by the UCI will make it more challenging to bounce back race to race. Showing his ability to adapt and deal with adversity both now, and at any races later in the year, will be beneficial but certainly won’t make things easier. 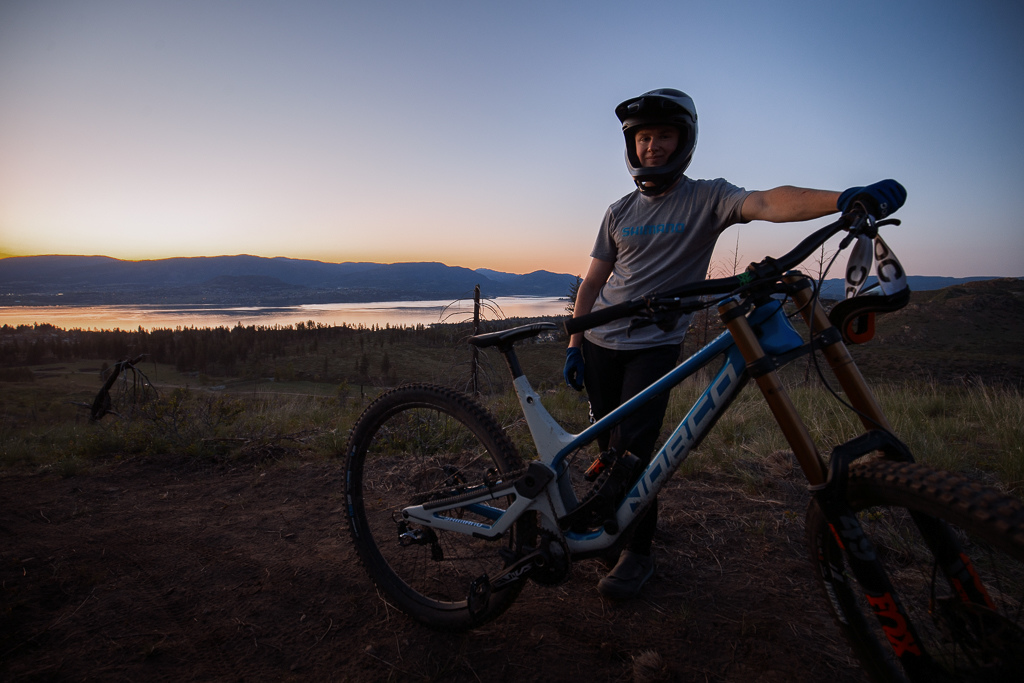 The downhill bike may see more action later in the year and Emmett will be ready.
So while adversity is thrust upon mountain bikers all the time, 2020 has given everyone a heavy dose to deal with before getting their treads between the tape. It will challenge all racers as they try their best to prepare for the shifting season start. But those with the most drive and commitment stand to reap the rewards of the longer than planned off-season.

Posted In:
Racing and Events Videos

Tweet
Must Read This Week
A Complete Timeline of Coronavirus' Effects on Mountain Biking [Update: US Open of MTB Cancelled]
140347 views
Behind the Numbers: 5 Trail Bikes Compared
60228 views
Video: ReTyre is a Modular Tyre That Lets You Zip on the Tread You Need
54580 views
Cannondale and GT to Reject Traditional Mid-Year Model Structure
51271 views
Santa Cruz Bicycles Releases Mixed Wheel V10
43034 views
Ridden & Rated: 13 of the Best Dropper Posts
42703 views
Yeti Cycles Will No Longer Use the Term 'Tribe' in Marketing
42089 views
The Best Tech From EWS Races on the British Isles
40914 views

connerg (Jun 8, 2020 at 6:46)
Seems more like minor inconvenience than adversity, given the state of the world at the moment; All things considered, looks like a pretty good time. Good riding, still!

prmtb04 (Jun 8, 2020 at 12:23)
Sick edit. with so many young riders theses days being supported by their parents and just playing and not working jobs, it's cool to see he's not shy of some work

Thejamon (Jun 8, 2020 at 15:19)
Feeling very fortunate to call our little pocket of Canada home right now! Sending best wishes and our support to everyone experiencing more significant adversity than us these days. Best of luck to the whole Blueprint Racing team this summer and fall! Can't wait to see you all back between the tape!

Socanman (Jun 9, 2020 at 15:58)
Sick video Emmett! Great riding.! Obviously learned everything about riding from your dad!