Taking the outside line of Madeira’s north coast for the 6th instalment of this epic week-long event.

With a global health crisis ravaging the plans of mountain bikers across the world this year, the few fortunate gatherings to have proceeded without disruption have been able to flourish amidst an otherwise dreary year. One such beacon of adrenaline-fuelled hope was the 6th instalment of the Mountain Bike Madeira Meeting. Taking place in one of the fastest-growing mountain bike Meccas, this year’s annual event had a great deal to celebrate. Not only being physically able to proceed welcoming an eager group of riders from across Europe, but 2020 also marks the organisation’s official partnership with Commencal Bikes. 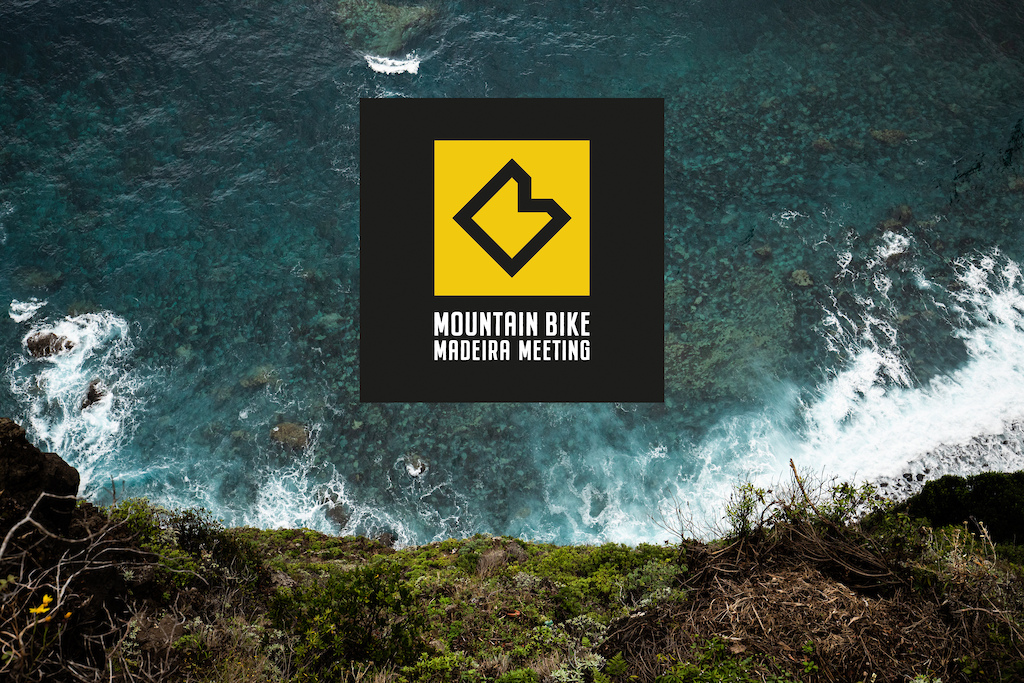 For a relatively small island that’s packed with jaw-dropping singletrack hidden deep within the Jurassic-like landscape, it’s often Madeira’s southside that attracts the masses. Largely owing to its close proximity to the airport and capital city of Funchal, the South of the island is more developed, busier and welcomes a milder climate. However, the north side of the island is a true diamond in the rough with great surf, greener landscapes and the home to the week-long Mountain Bike Madeira Meeting, in Seixal. With black-sand beaches, volcanic rock and tumbling cliffs, Seixal plays host to this annual event from its nautical club on the coast, providing the perfect opportunity to escape the hustle and bustle of the island’s southside to discover hidden gems off the beaten path. 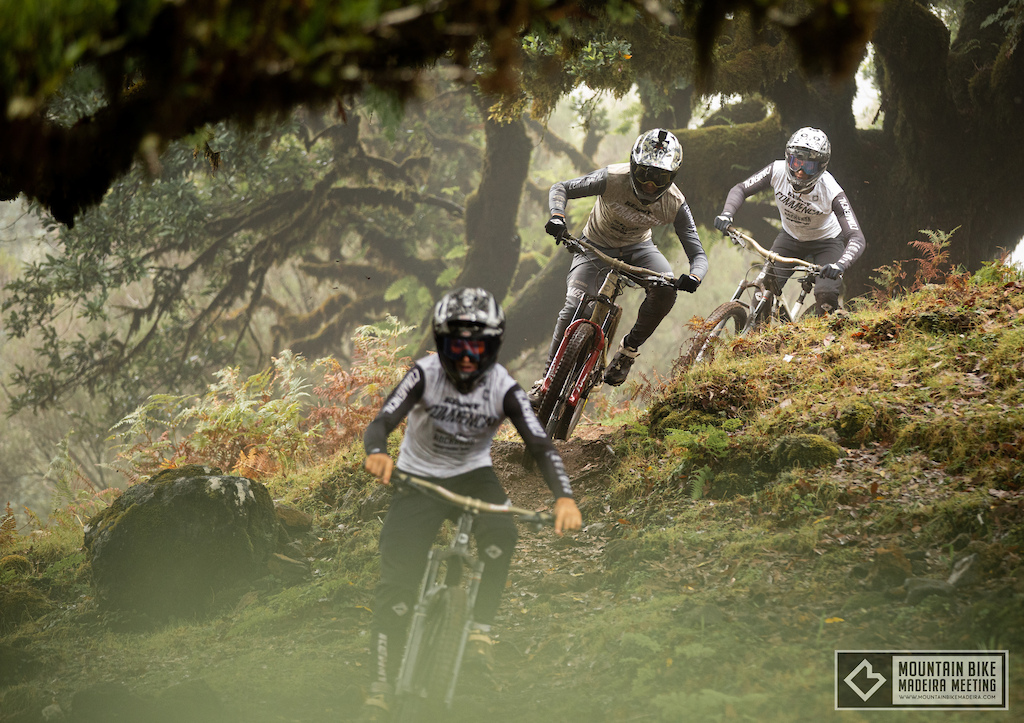 The Commencal Enduro team shredding Cyclin' Center Porto Moniz
For the organisers of the Mountain Bike Madeira Meeting, the aim isn’t just to ride bikes and slay trails, even though there is plenty of that, it’s more about discovering exotic Madeiran treasures. Each day covers a new region of the island with shuttles and guides provided to ensure you get the most out of your day on the bike while taking in the island’s sights and culture. With the north and south side of Madeira offering diverse terrain, landscapes and even climates, each day is a truly unique experience. With the continued success of previous editions, the Mountain Bike Madeira Meeting played a key role in the development of its first mountain bike centre, Cyclin Center Porto Moniz Portugal. Located amongst the luscious Laurissilva forest, it’s here that the Regional Enduro round would take place at the end of the week-long event.

This year’s Mountain Bike Madeira Meeting kicked off by arriving at the organised accommodation in Seixal. Offering a comfortable stay, the SolMar provides authentic cuisine, secure bike storage, bike wash and laundry facilities on site. Joining the week’s antics were Alex Rudeau, Antoine Vidal and Alexis Icardo from the Commencal Enduro Team to celebrate the new partnership and to help showcase the trails of Madeira to the masses. After a bountiful breakfast each morning, the shuttle and guide were outside ready and waiting to escort the group to the day’s riding destination. Over the course of the 5-day week, we explored most trail treasures both the north and south side of the island had to offer. Unlike many mountain bike retreats where there’s usually a great deal of pedalling involved, Madeira is primarily uplift assisted. Being transported up to the top of the trailhead certainly delayed the onset of fatigue, allowing you to fully enjoy the descents, all day long. Descending from misty mountain tops, down through tropical-like rainforest before hitting the cliff-lined coast, each trail overwhelmed the senses, igniting an insatiable hunger for more. 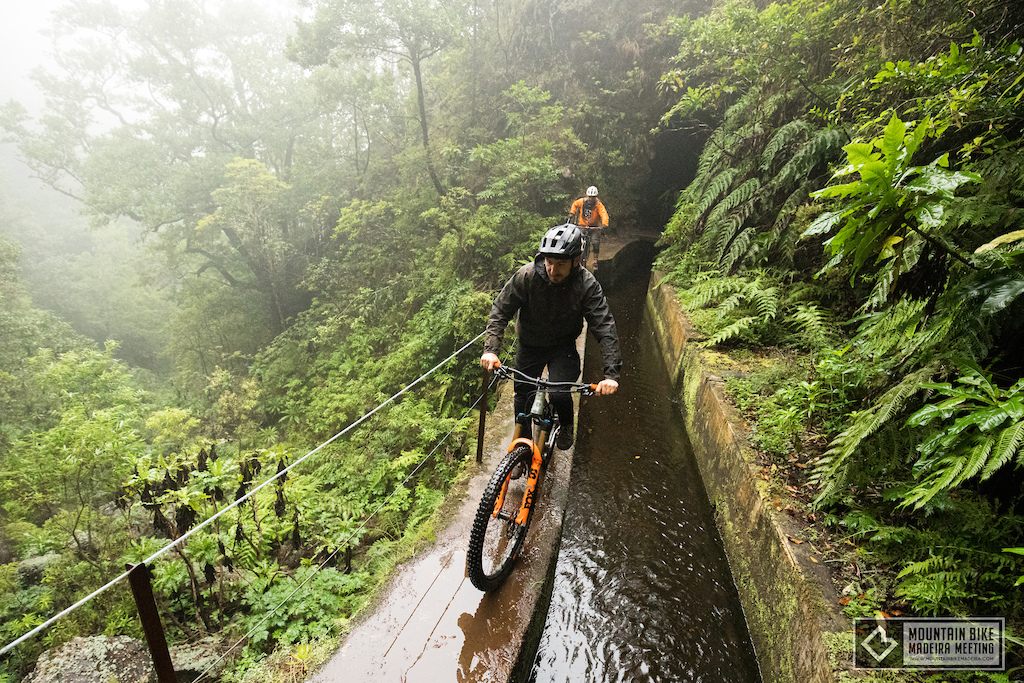 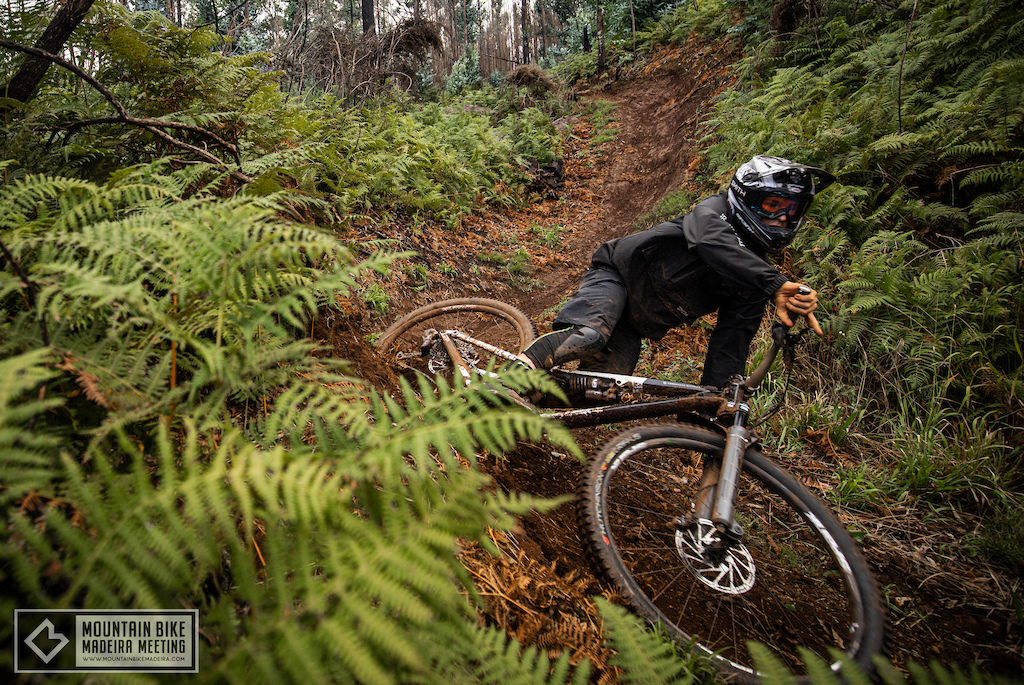 
Discovering the iconic trails of Machico, Calheta and Poiso, including those used by the Enduro World Series, we explored Madeira’s infamous Levada waterways by bike. These historical channels are well known around the world for elegantly transporting mountain water down through the valleys of the island while offering a delightful cultural experience for riders, walkers and tourists. After a week of trail enlightenment, the MTB Madeira Meeting culminated to a Regional Enduro race held at the trail centre of Fanal. Once word began to spread about this emerging mountain bike mecca, riders from all over the globe began flooding the small Portuguese island. This sudden growth helped to steer local councils to permit the expansion of Madeira’s trail network, along with other action sports activities such as canyoning, surfing and extreme trail running. One such area that has been vastly developed is the Cyclin’ Center Porto Moniz, Portugal, located in the northern part of the island. Having completed phase one of development which consists of XC loops and six enduro trails ranging in difficulty, the second phase of development will expand on this with additional trails to make this area a certain hotspot for thrill-seekers in the coming future. The trails here are natural with little influence from trail builders in order to preserve and make use of the diverse terrain and jungle-like environment. It’s here that the weekend’s Regional Enduro event took place. 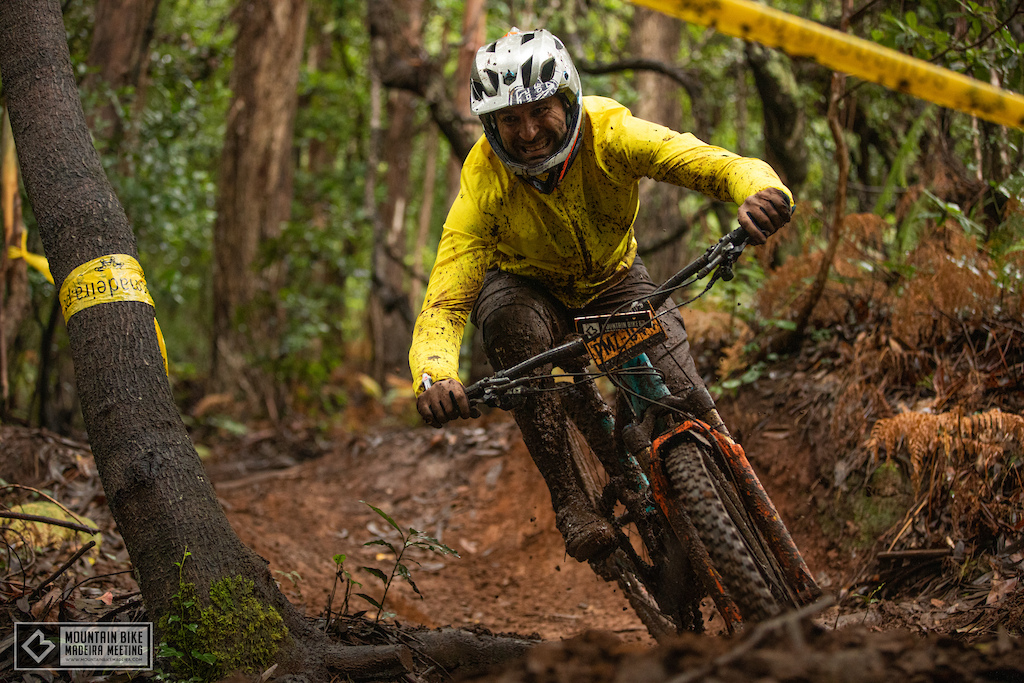 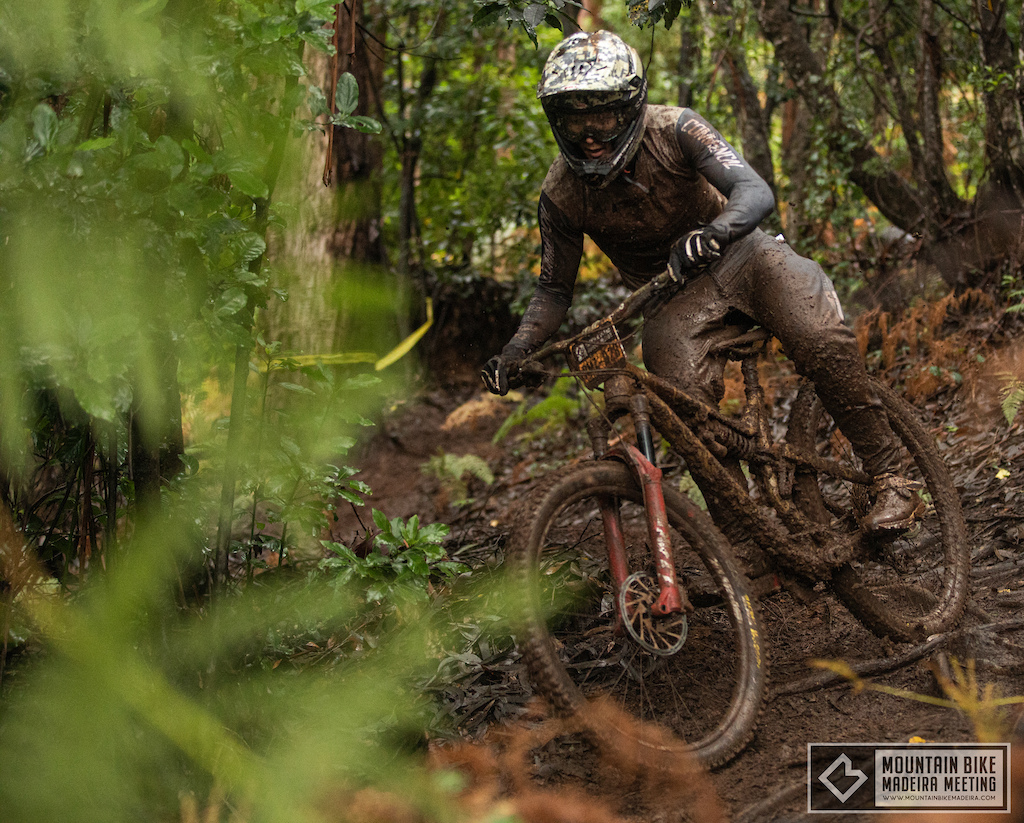 Things got a little slippery for the Regional Enduro


After a week of familiarising yourself with the trails, terrain and infamous ‘Madeira ice’, attendees of the Mountain Bike Madeira Meeting had the opportunity to enter the weekend’s race to round off the action-packed week. Taking place amongst the native Laurissilva trees in a Unesco World Heritage site, there were six stages with short transitions traversing and descending the Fanal mountain. As poor luck would have it, the weather took an unseasonal change for the worst with the top stages shrouded in a fine, but very wet, mist throughout Saturday’s practise and Sunday’s race. With water-logged stages posing safety concerns, the two last stages were closed on race day, but that did nothing to dampen the spirits of all the racers taking part. With four slippery, challenging and super fast trails to navigate down, the Regional Enduro came to an end at a local snack bar where riders washed off the sweet Madeira dirt before heading to Seixal’s nautical club for some authentic beachside food and awards ceremony. 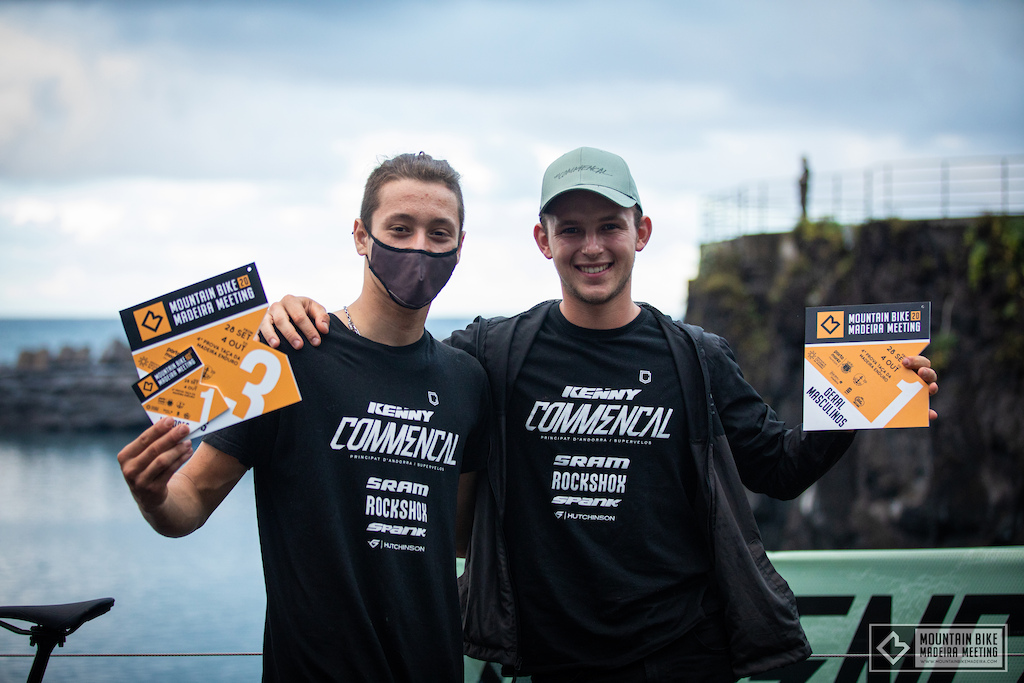 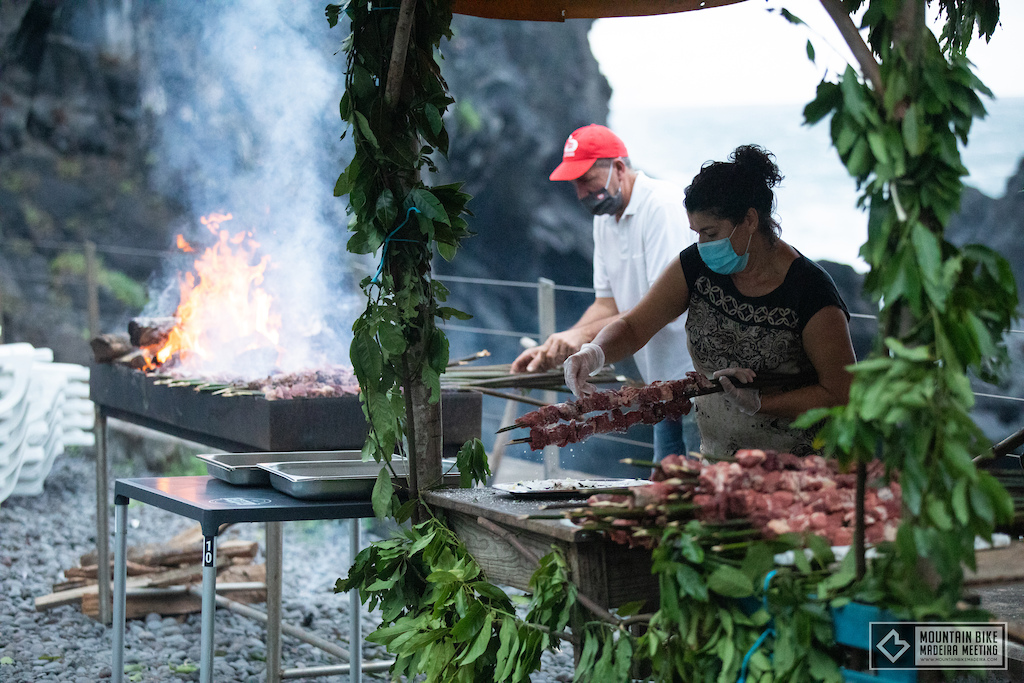 The Commencal Enduro celebrate their awards before some authenthic Madeiran food


After a few beers by the beach, racers and spectators gathered around for the awards ceremony and presentation by the organisers of the Mountain Bike Madeira Meeting. Taking home plaques and prizes, the winner of the Elite Men’s category was Commencal’s Antoine Vidal who took the win 25-seconds ahead of Pedro Silva who came in 2nd place, and Mario Costa in 3rd place. In the Elite Women’s field, Ana Costa took the win with Carina Ferreira taking second place.


The 2020 Mountain Bike Madeira Meeting is hosted with the assistance of the Seixal Nautical Club, local councils and tourism board. The aim of this thrill-seeking week is to showcase the northside of the island, the areas that are often overlooked which contain phenomenal trail treasures, rich culture and areas of surreal outstanding beauty. This annual event has grown year-on-year with more riders flocking to Seixal to take part, and now, with the addition of Commencal Bikes as an official partner, the sky is the limit for this well-organised, action-packed week for mountain bikers.