Lately, I’ve only been traveling. I’m either packing up or unpacking again. I’m quite used to hustle and hectic lifestyle, but this was a bit too fast even for my taste. On Sunday at the XCO World Cup in Nové Město, I met with Ondra the representative of Mercedes Benz Vans, who told me that on Wednesday they would fly me to Sahara with a bunch of journalists and industry people and that my bike had to be dropped at dispatch latest on Monday afternoon, so they could ship it track to Tunisia.

My eyes opened wide. That was all meant to be done until the following day! I needed one bike for the weekend session of Simpleride Camp, my new bikes for the next season were still in Spain and I immediately rejected the idea of taking a cross-country bike to the desert. There was only one solution left: to borrow an older model of Mondraker Dune from my wife, Terka. I was heading to the dunes, so this bike sounded like the right choice anyway.

The next task was to sort out the clothes I was going to take. I had exactly two days to think about it. It was supposed to be my first big experience with sand and temperatures above 40 °C. People from Mercedes told me I should have a 'desert friendly' outfit so I packed a pair of Bitiy Obod camouflage pants from our Ukrainian friends, high-top boots as a protection against snakes and scorpions, sunscreen with a 50+ protection factor, sunglasses, scarves and a bike. Looking for a suitable bag, I focused not only on the capacity but also the quality of the zipper, because fine desert sand has the ability to get literally everywhere and destroy your electronics. Also, it will scratch between your buttcheeks too. Worried the Highlander and Mitas tyres would sink into the sand, I also packed some extra 2.8‘‘s, non-branded. And that was about it. I decided to stick to the motto of photographer Míla Štáfek: "What you don’t have, you don’t need". 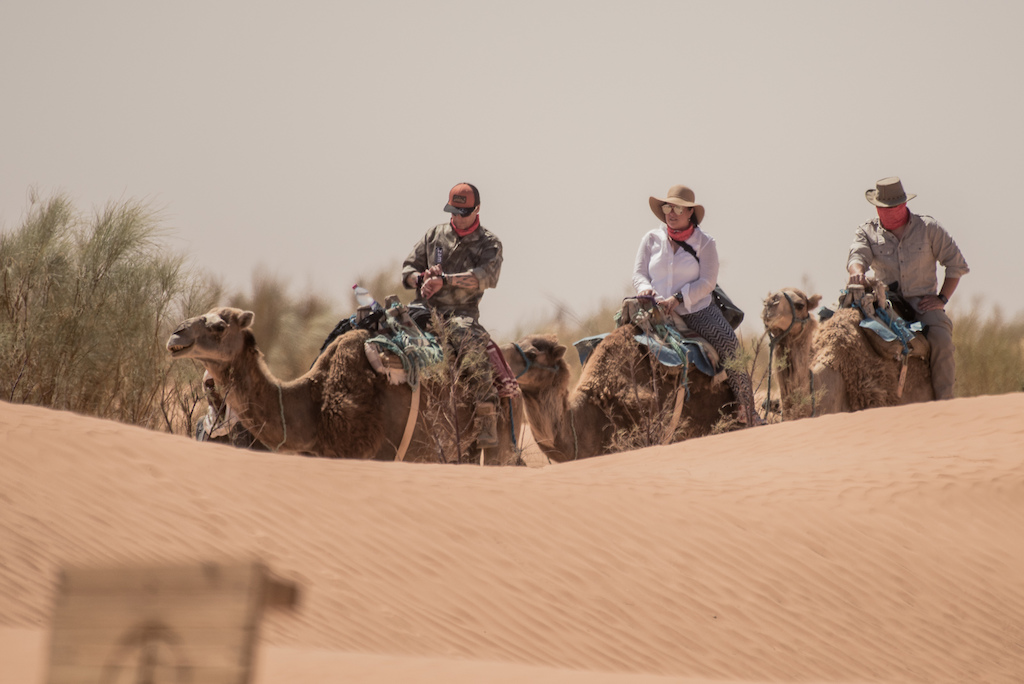 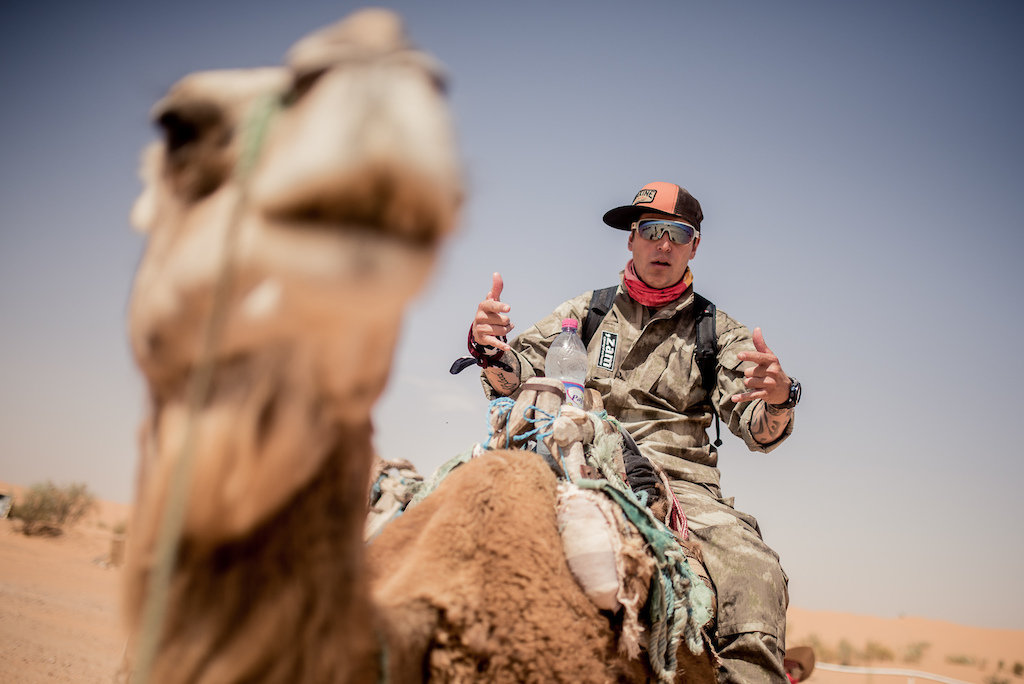 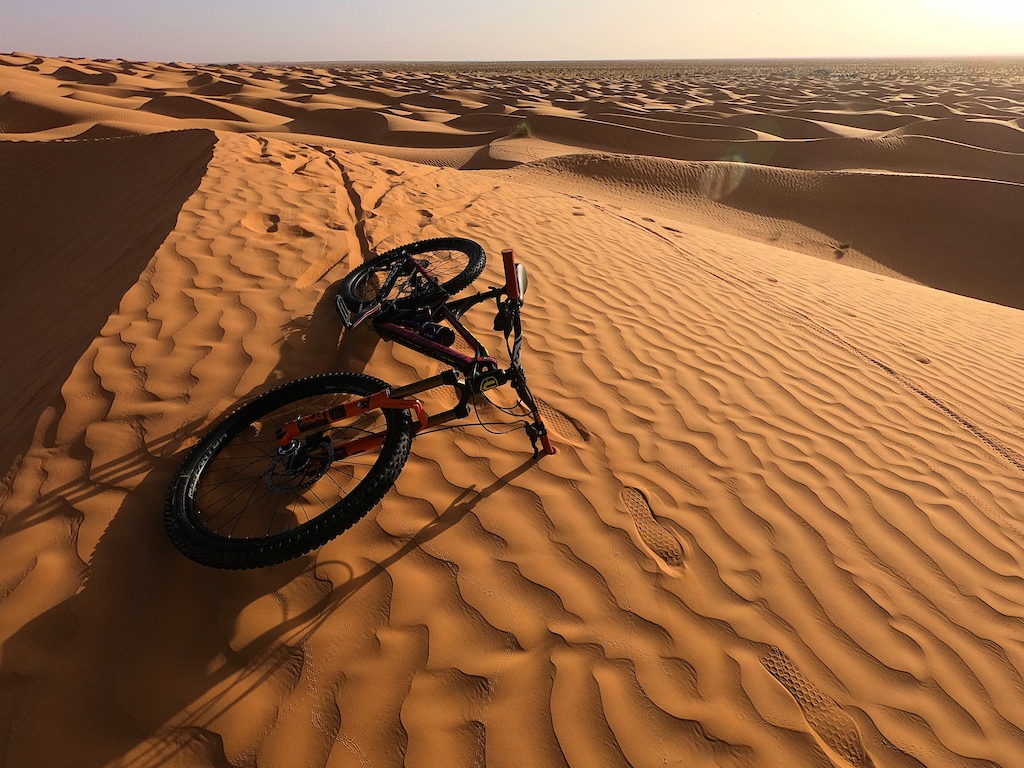 Before I even knew it, we landed on the Mediterranean island of Djerba, which belongs to Tunisia. Right after I set foot on the ground I got slapped right in the face by insane heat and it was clear to me that riding bikes here would be a tall order. We jumped into the prepared Mercedes vans and headed to the mainland towards the Sahara desert. After 230 km we ended up in the bivouac named Zmela Camp. Dakar racing teams, like for example the Czechs from Buggyra Racing, return here to practice driving in Saharan dunes.

If you follow the basic safety rules, nothing will disturb you here. In the tents, it is vital that you don’t leave anything on the ground and before you put your clothes on you need to shake them well to make sure no scorpions are hiding in there. They are literally everywhere, always looking for nice hideouts. Then again, desert vipers are even worse. They’re very small but also extremely poisonous. Local Bedouins grabbed them with their bare hands and killed them with sticks in front of our eyes. These snake beasts crawl into your tent and if one manages to bite you, you barely have enough time to write your last will.

Actually, I’m looking up some more information about them on Wikipedia as we’re speaking and maybe it’s not all that tragic. A bite from the Saharan horned viper hurts like hell but it doesn’t necessarily have to be fatal. Nevertheless, from now on I always close all my baggage as tight as possible and I hang all my clothes really high. 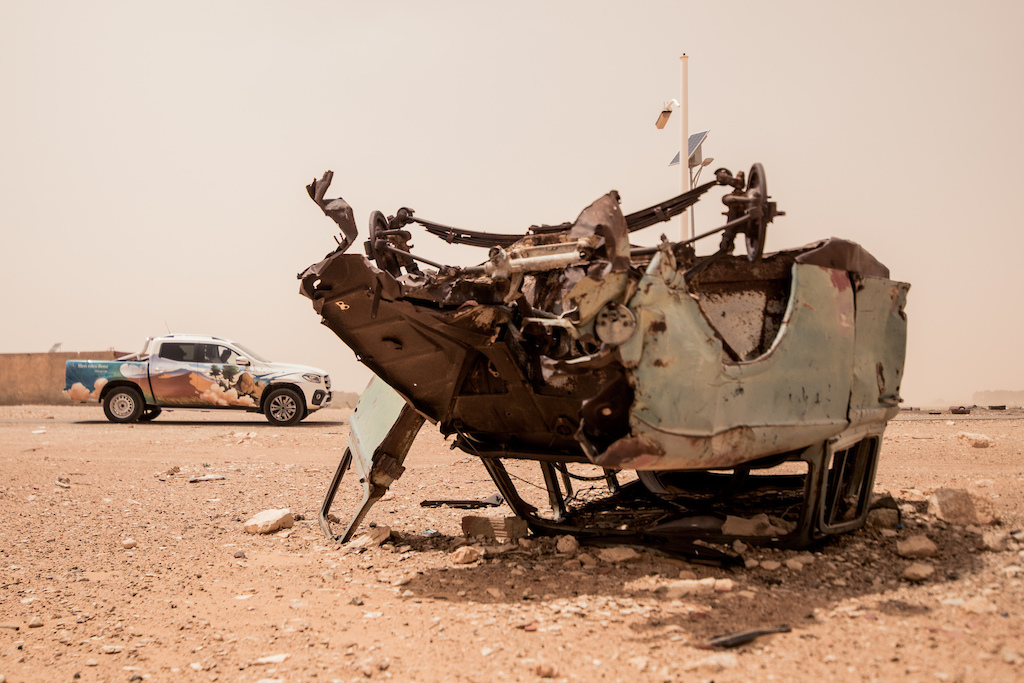 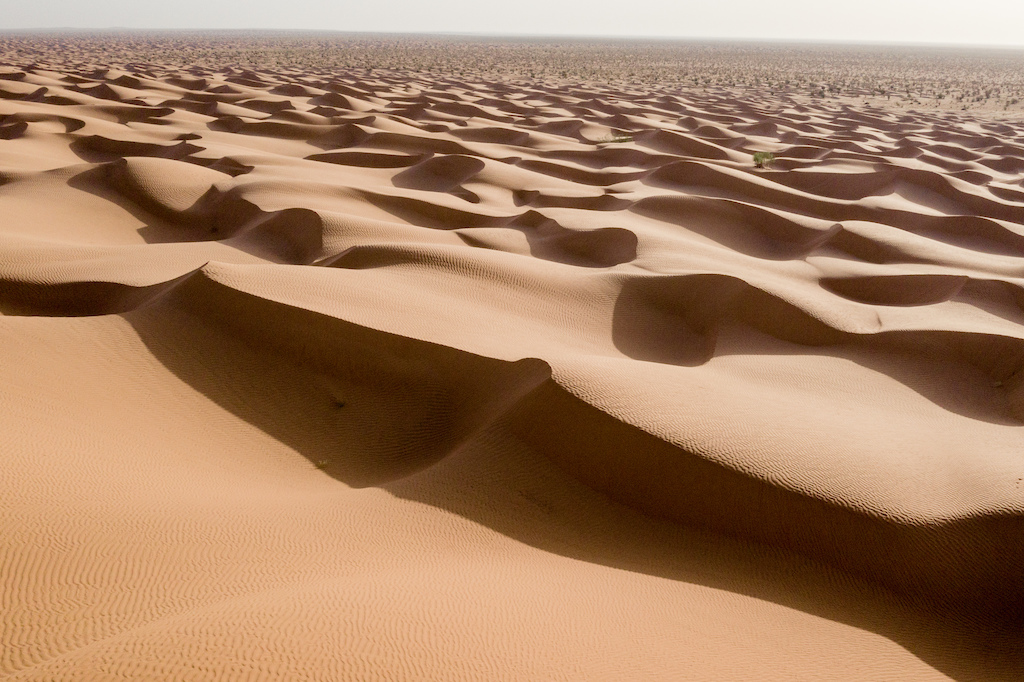 At eight in the morning, it was thirty degrees in the shade – and good luck finding much of that in the desert anyway. Therefore, I applied SPF 50 sunscreen in multiple layers. After a proper Bedouin breakfast we went to see the sand. I have to say that this yellowish surface is quite unpredictable. With off-road X models from Mercedes we went to get a good tasting of the desert with the boys from the Buggyra racing team led by David Vršecký. For me, it was a valuable experience that I was going to transfer to the bike later on. 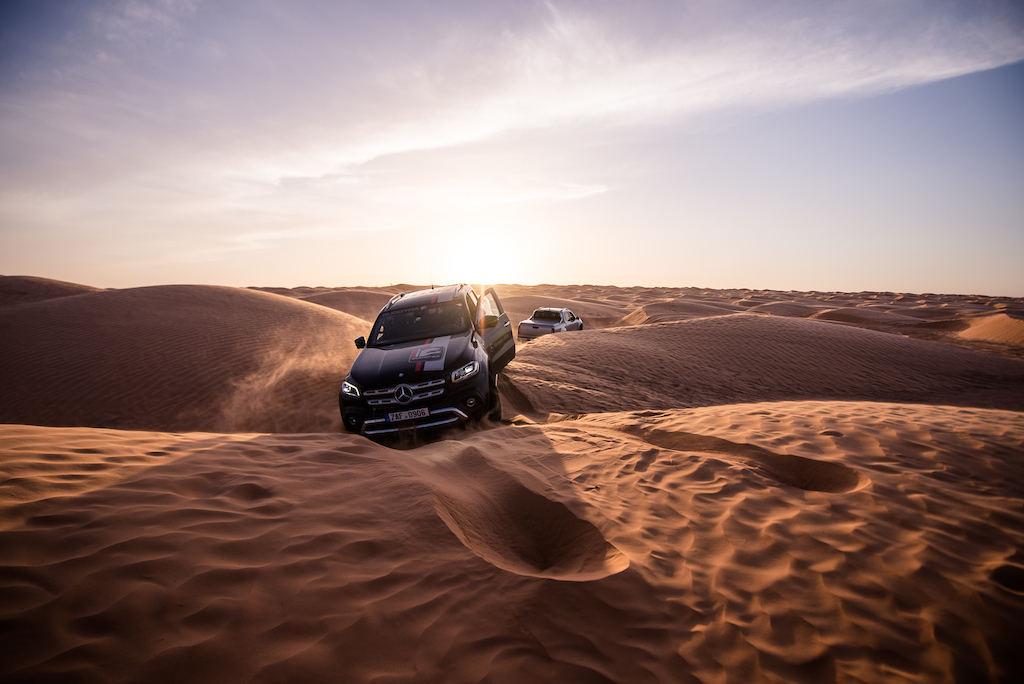 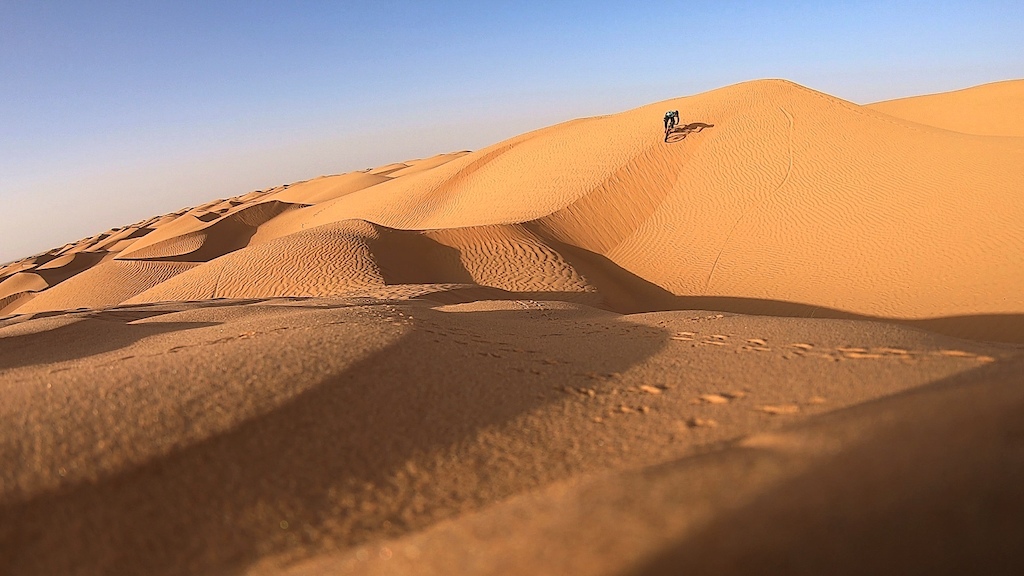 The properties of the sand vary a lot and don’t only depend on the wind but also on temperature. An important rule is to approach the windward side of the dunes that have the puffy little ripples. There is also a risk of immediate sinking in the sand, because it is as soft as freshly ground flour so the best times to get out there on the dunes in the morning and then in the evening again. At noon, everything turns into a smooth sea of yellow darkness, where all the visible ripples disappear. Another crucial factor is the choice of tires and tire pressure. With the car, we were playing around with 1 bar, on the bike I was running 0.6 bar front and rear. 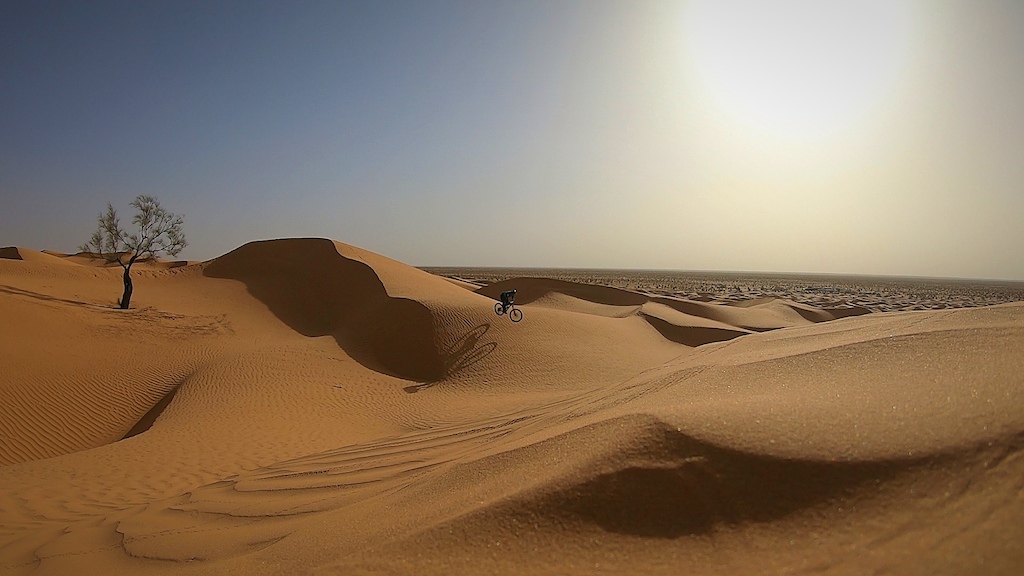 The under-inflated tire will wobble, so it covers more surface to catch some grip, if you can even speak of grip. While cruising through the desert and digging vehicles out of the dunes, we drew valuable advice from Petr Háša a.k.a Wrecker. I learned the most important thing from Buggyra Racing Team manager Martin Koloc, he told me if I was gonna ride my bike in the desert, I better be at the top of a dune ready to drop in by 5 am, latest! Being aware of this information, I went straight off to bed. 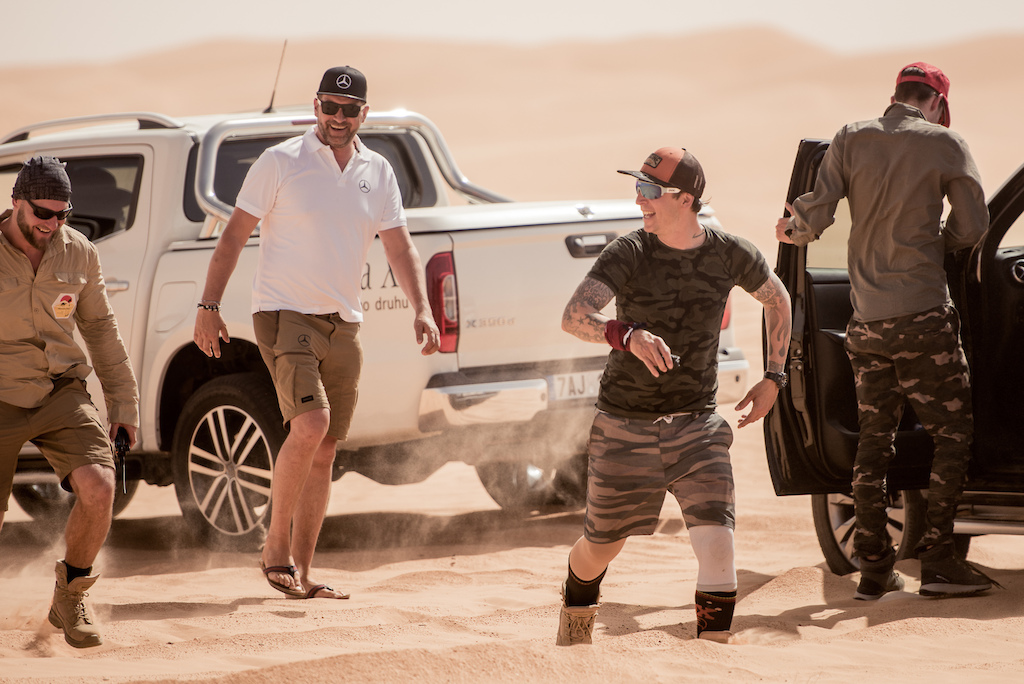 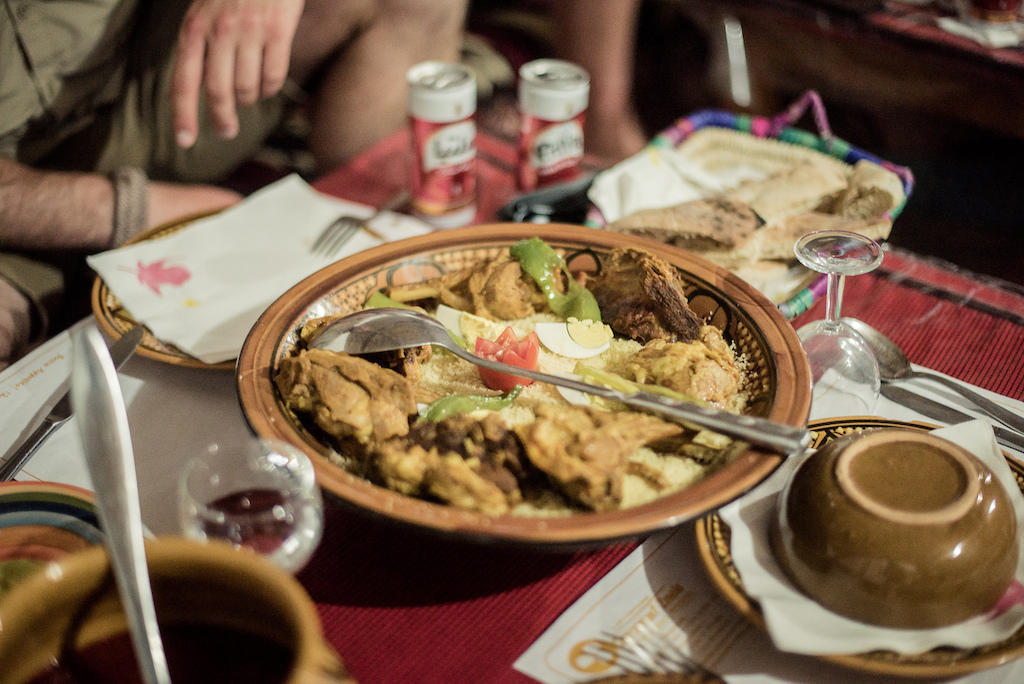 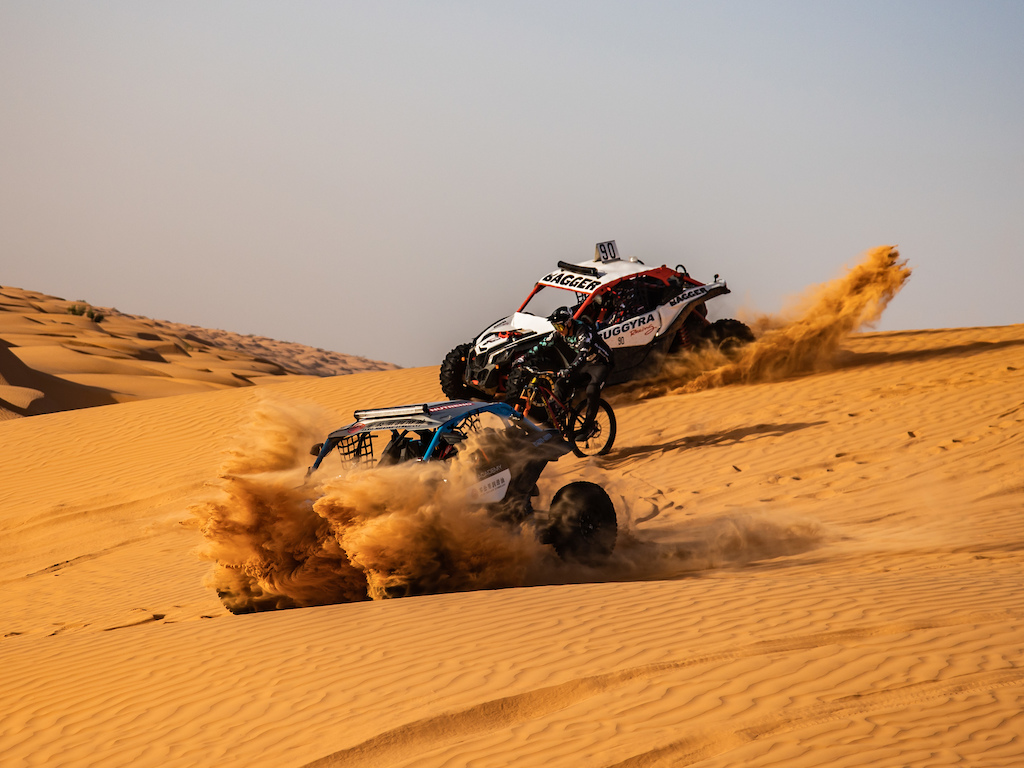 Every morning I went through the same routine: alarm clock at half past four, sunscreen on my face, put on riding kit, which I always prepared in advance before going to bed, and then I’d be on my way straight into the desert. 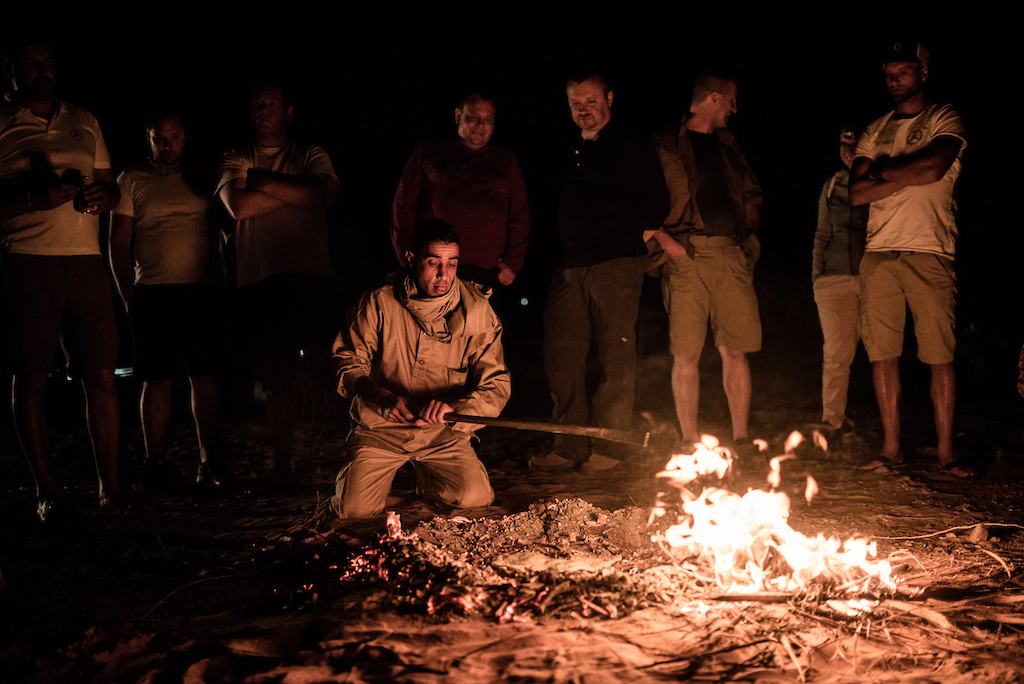 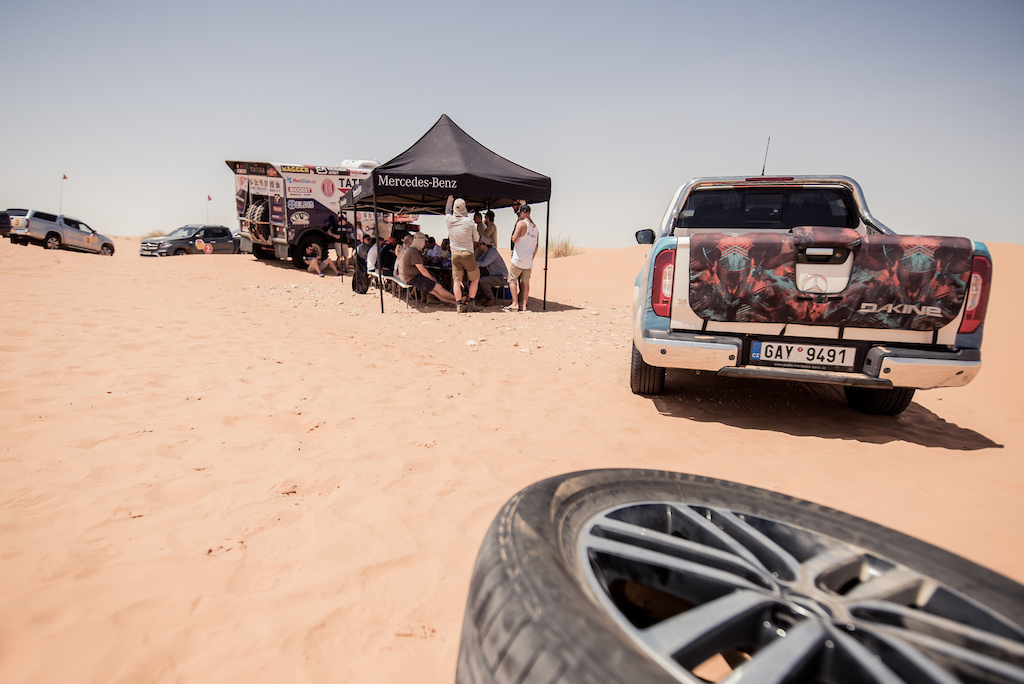 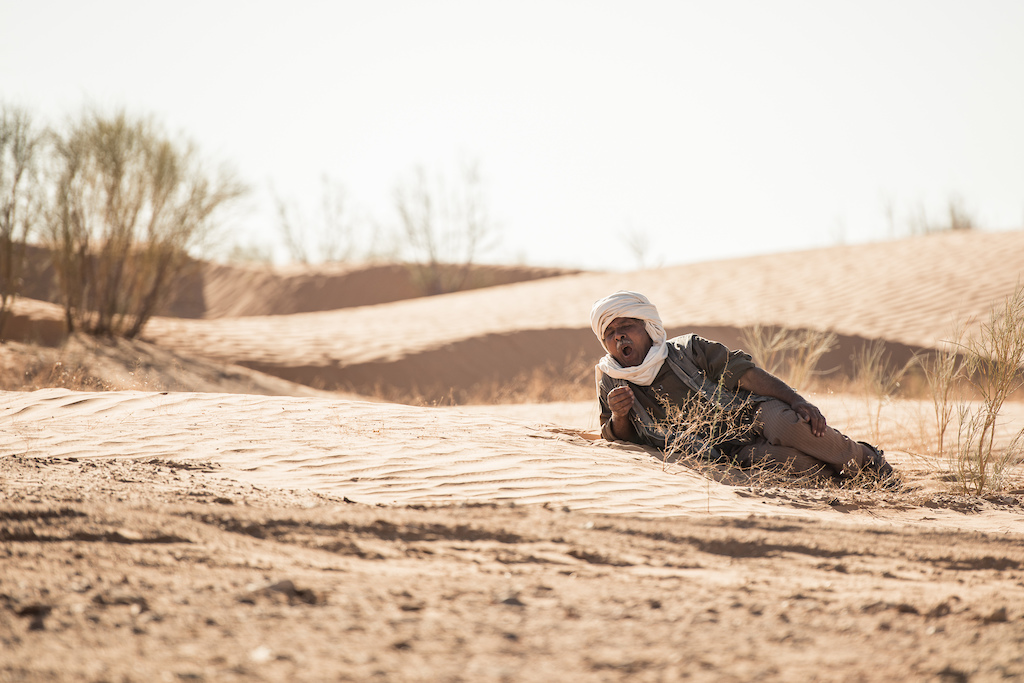 On the way to the highest dune, I had the opportunity to get a very close and painful look at the hardness of the morning sand, which was good to gage traction and know where it would hold me, and where it wouldn’t. I found out that when I picked up speed, I could also go to a smaller leeward side and keep on going. After three hours in the dunes I was completely knackered, the sand in the meantime softened and the wheels began to break away and lose any sort of traction on what only two hours ago a ridable surface was. During that time, I oozed in three litres of water and felt like I was carrying a child's entire sandbox, in each shoe. 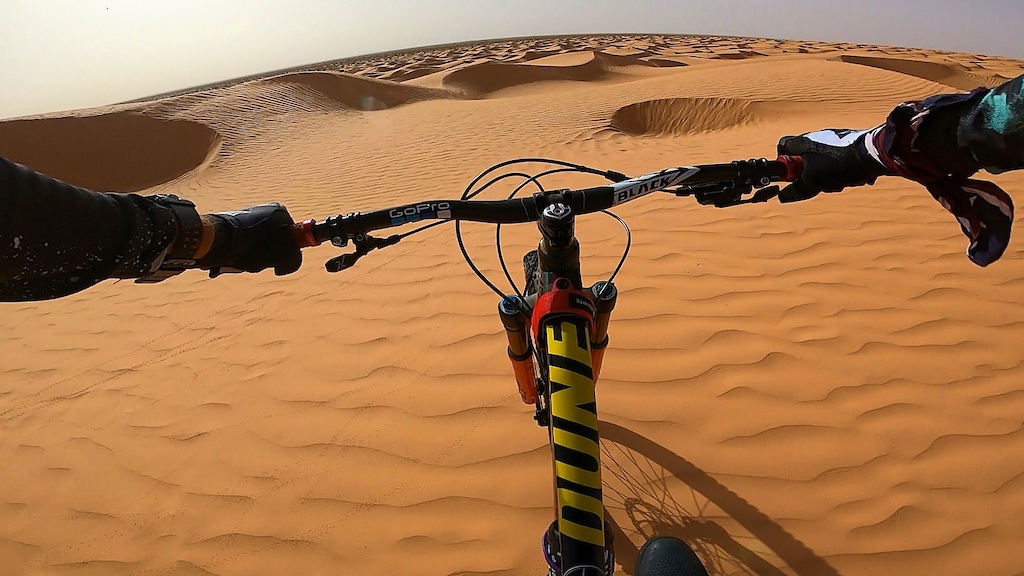 To 'cool down', Martin Soltys took us for a test ride in the Tatra truck used in the Dakar Rally. Well, a sauna would be an understatement! It was sixty degrees in the cabin and we had to wear fireproof overalls. The truck's windshield was like a shopping window moving up and down in the dunes, repeatedly displaying the following colours: yellow - blue - yellow - blue. Those hits are so rough on the body, it wouldn’t make sense to seek out a physical therapist. If you haven’t seen the ride from this side of the windshield, you simply cannot know what the human body can do. Massive respect to those guys! 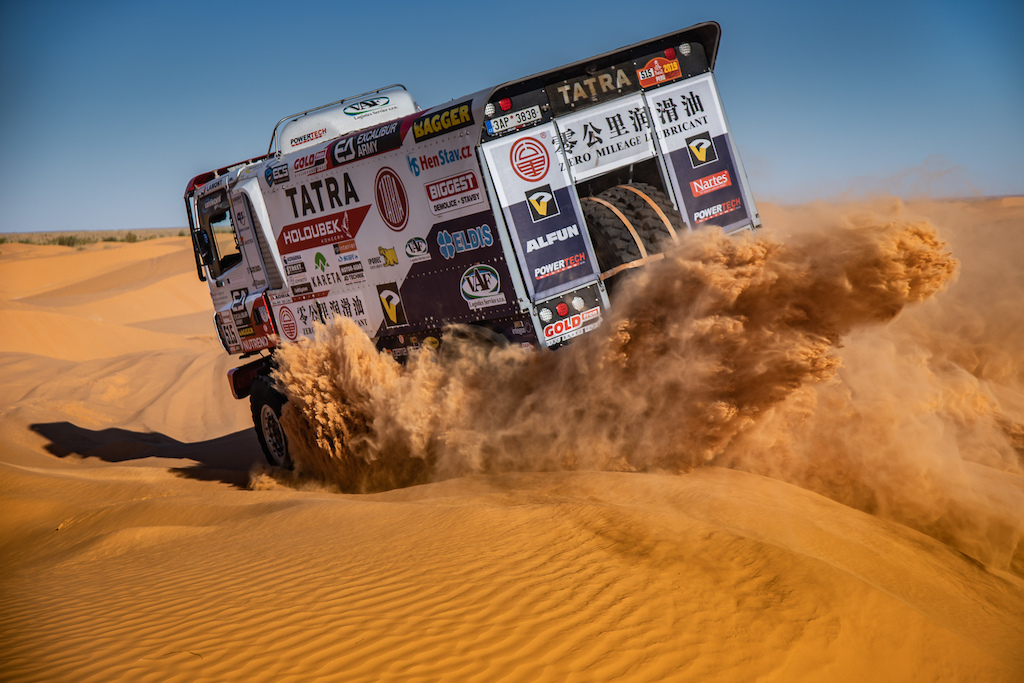 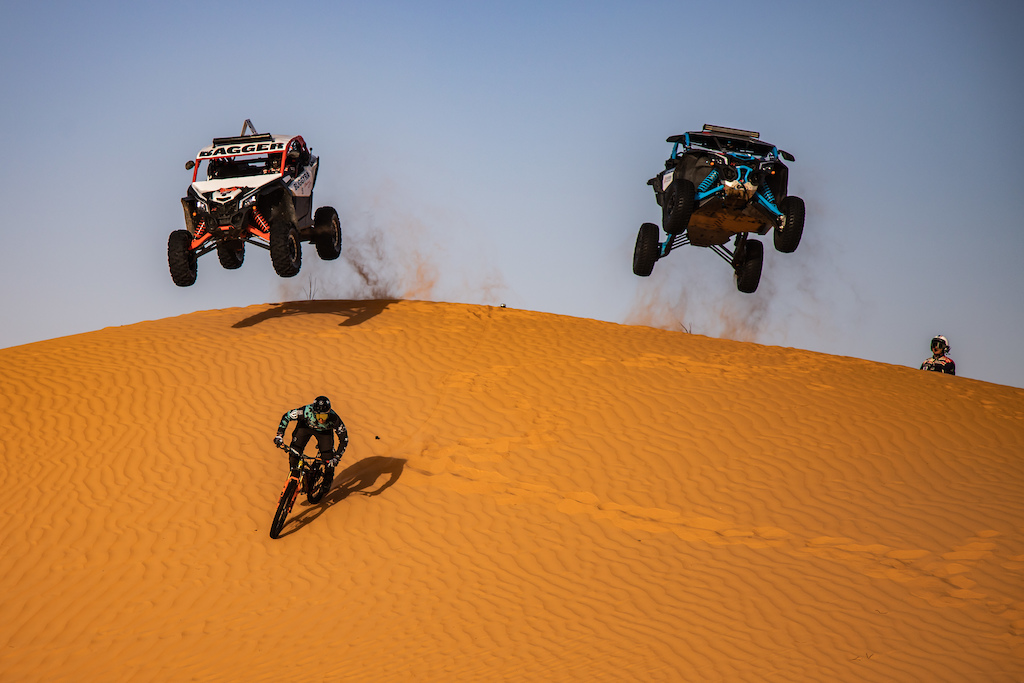 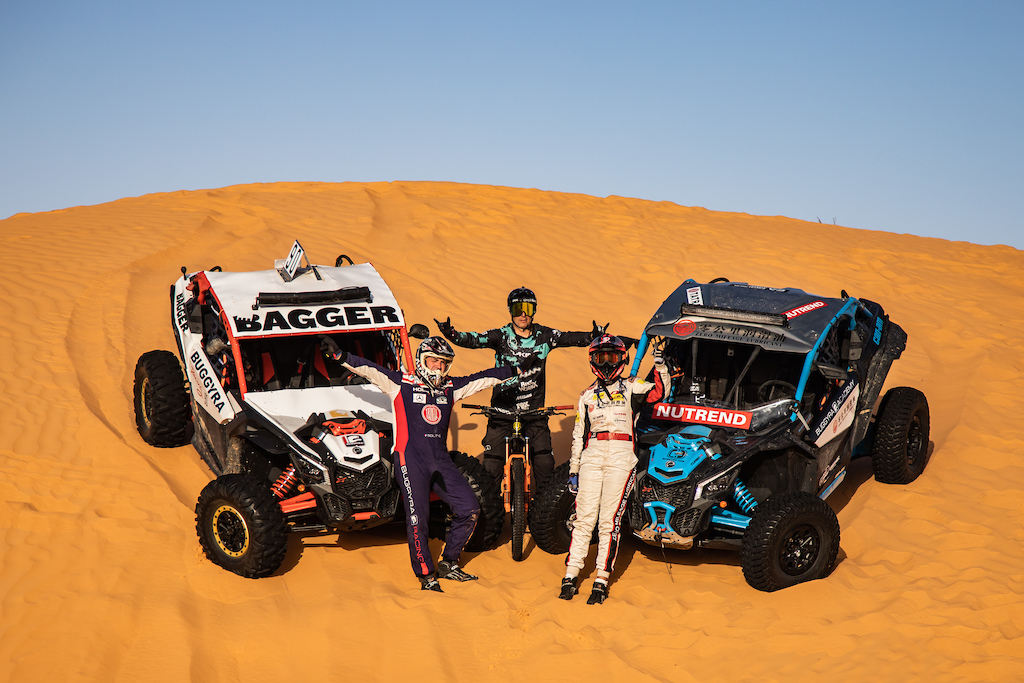 Interestingly, every day the sand was different. It depended on the wind, the night temperature, the humidity of the air, and the mysterious laws of the Sahara. The afternoon desert storm can carry sand even where no one would expect it, and above all, it will completely change the basic consistency of the dunes. While one day a certain spot rides nicely, the next day it can be completely useless to try riding. 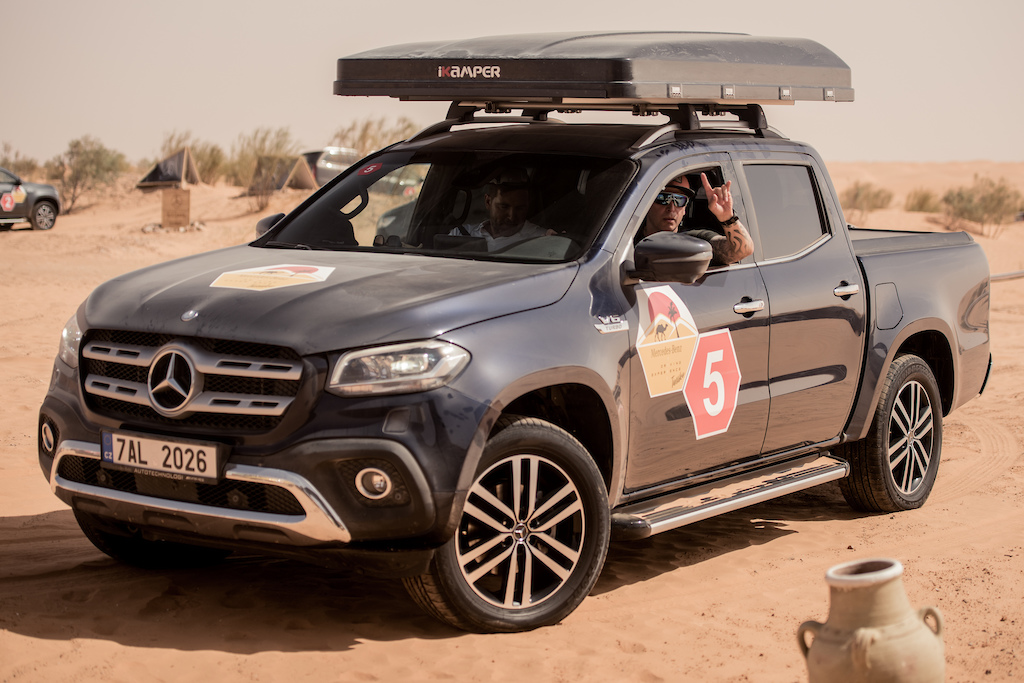 During the five days in the desert, I had the opportunity to soak up the experience of the Dakar truck crew, try out the incredibly versatile Mercedes-Benz X in the dunes and experience things that are will never be forgotten. Souvenirs are inevitable, as I will continue to find Sahara sand within my gear for another year. 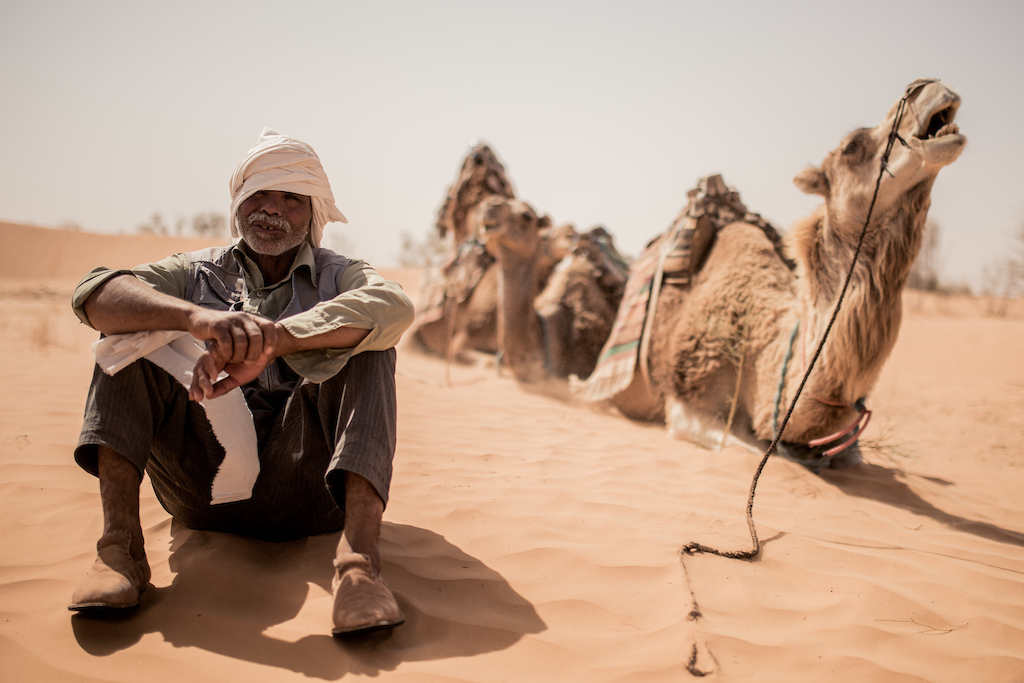 Particularly noteworthy are the Bedouins living in these high temperatures on inhospitable plains, who are willing to share their last drop of water with you with a smile on their faces.

RayDolor (Jul 27, 2019 at 11:14)
The blatant commercialism seems to have worked on me. I'm currently searching for a pre-owned camel. Gotta have one.

IntoTheEverflow (Jul 27, 2019 at 9:55)
Because the only reason they chose that terrible cycling location, was the Dune on a dune "joke".

pinnityafairy (Jul 27, 2019 at 10:02)
Because it's really embarrassing when your friends catch you riding a fat one

what next??
swamp gliders and roadkill bbq reviews??

iamamodel (Jul 28, 2019 at 2:43)
I thought the information about the changing consistency of sand was interesting. Truly.