Video & Photo Story: Hardtail Bikepacking through the Canadian Rockies in 'Embrace The Suck' 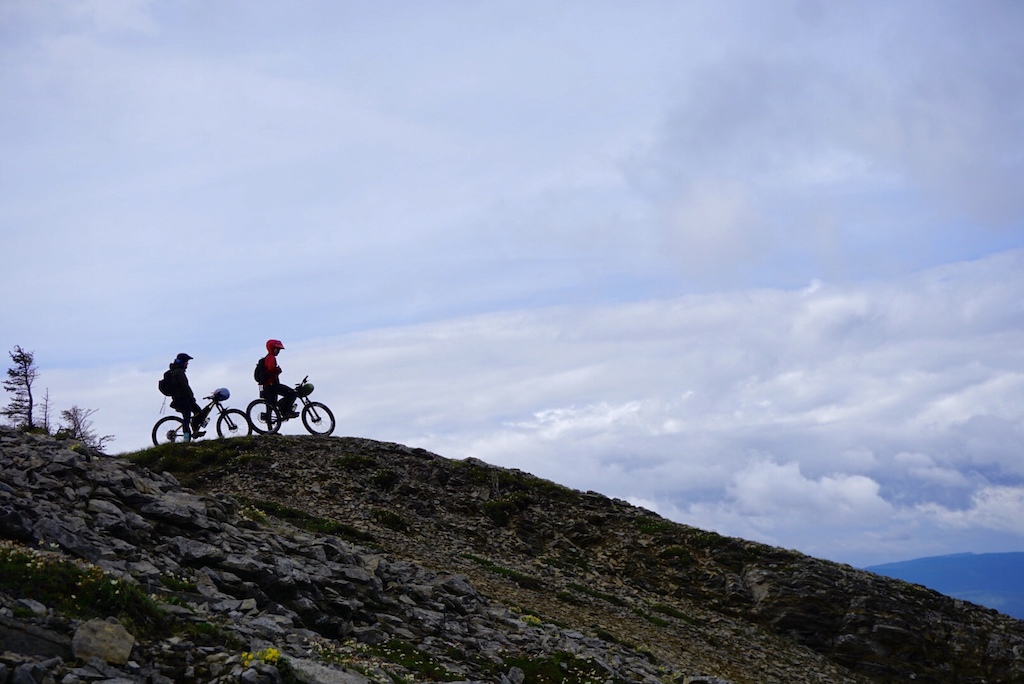 The volume of water my shoes were holding was only outmatched by the amount the padding my chamois contained. There’s a particularly low type of morale that comes when it’s rained that hard and you know that within an hour you’re going to have to crawl into a damp sleeping bag and try to sleep for the night. As I drifted off into a restless sleep that night, I dreaded the thought of putting on my sodden gear early the next morning.

The idea for this trip was born years ago when I made a living taking kids on hikes they probably didn’t want to be on. Hiking around a quiet corner of the Canadian Rockies, I dreamt of riding bikes through these remote alpine bowls full of pristine creeks and fine shale slopes. The plan for this trip did not come into fruition until recently when I was able to put two and two together and realized that this whole bikepacking craze might be the key to getting into some of these remote locations to ride.

I began experimenting with ski straps and sewing machines. Eventually, I had a modest amount of gear strapped to my bike and when my friend Logan invited me to join him on a 6 day trip from Kimberly to Golden via logging roads, I answered as any new father would, “I can join you for the last two days”

After two days of entertaining stories from Logan, countless wildlife sightings, and a ride back into Golden on one of the town’s classic pieces of single track (while everyone who passed us gave a second glance at our packed out bikes) it was straight to Google Earth for me. I began tracing out potential routes using satellite imagery and a poor memory of hiking trips past.

Now, selling someone on an adventure is easy as long as you have two key ingredients: 1) Hype up the unforgettable riding that is sure to be had and 2) forget to mention the potential long slog with bikes on your back up a slope you’ve only seen on Google Earth.

Logan was interested immediately and I rounded out the crew with my two friends Cheryl and Jobbo. They would normally be sailing the Mediterranean at this time of year but found themselves stuck in Canada due to the pandemic. All of them would be quite comfortable with any riding I could throw at them, however, the one little hitch was that neither Cheryl nor Jobbo had spent much time backpacking, let alone bikepacking. Using my winning formula I had them convinced, ney, psyched after one conversation over FaceTime. They didn’t suspect a thing. Two months later the trap was set and we were putting the final touches on packing our bikes at the trailhead. 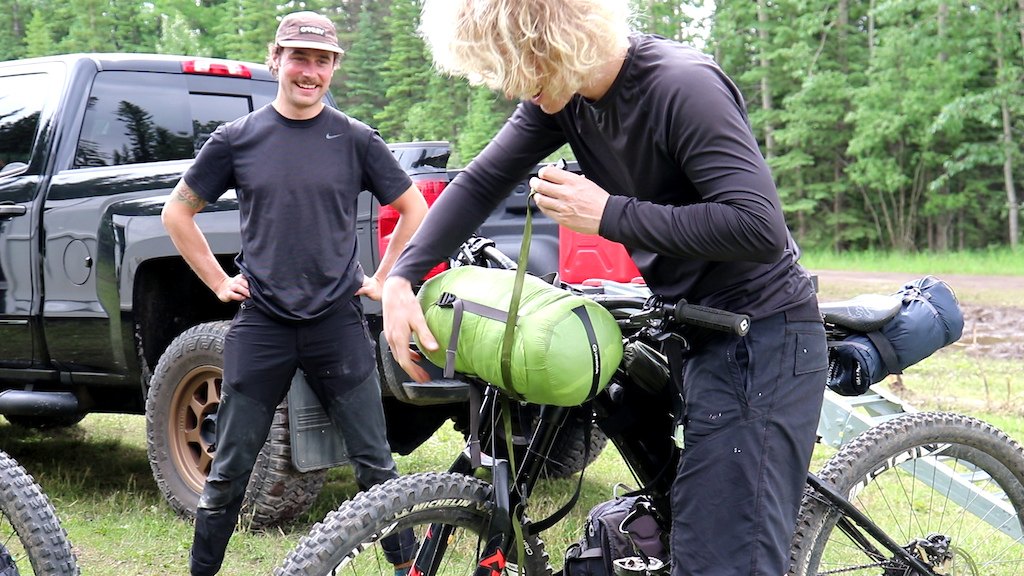 Jobbo, learning the art of strapping bags to your bike 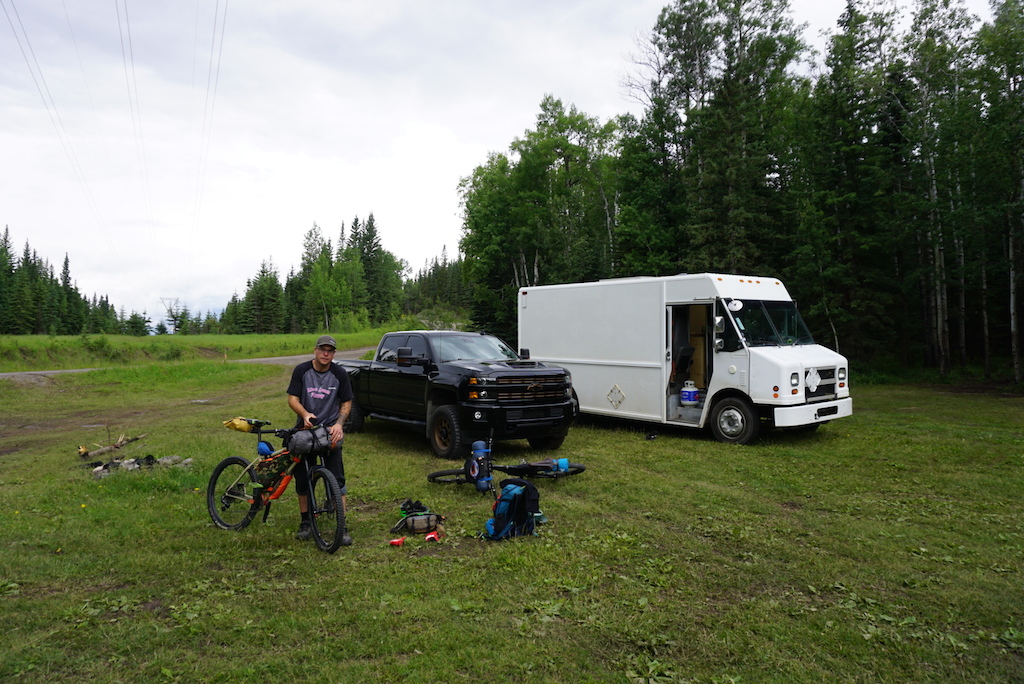 High spirits and good weather at the start of the trip

I’ve always felt the key to adventure is having a plan that is about 70% known and 30% a mystery. As we set off down a powerline road that I had never set foot on before, I hoped that things would go smoothly enough that the crew might follow me on the next trip.

We blissfully sped off down a gravel road full of short rutted out hills filled with natural berms and jumps, laughing and whooping while dark clouds began to build all around us. After countless creek crossings, everyone’s shoes fell victim to a slip or a fall. I had played off the ominous weather forecast as nothing to worry about since the weather changes constantly in the mountains. If you want to play in the big ring, you can't wait for the weather to be perfect...right? 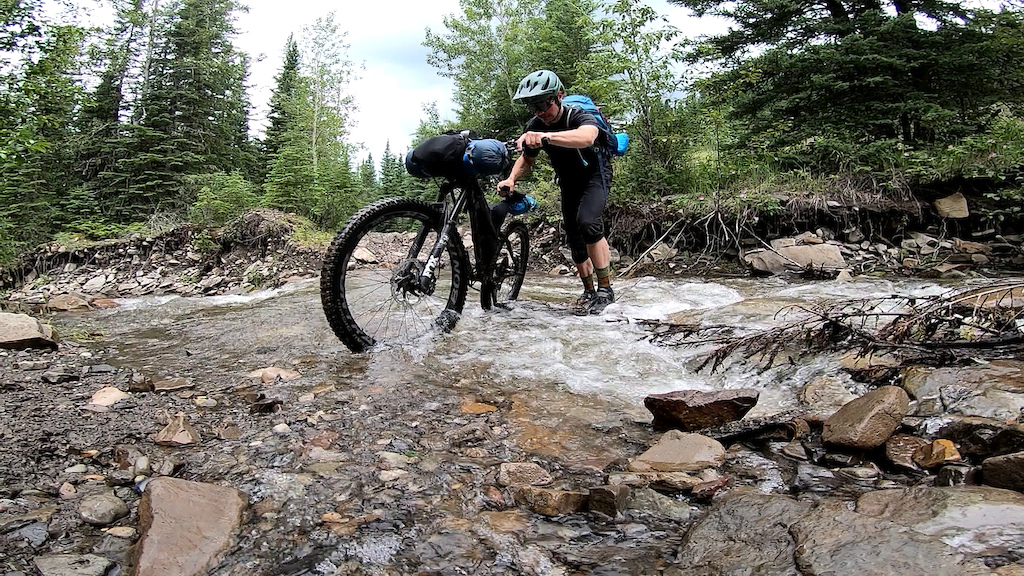 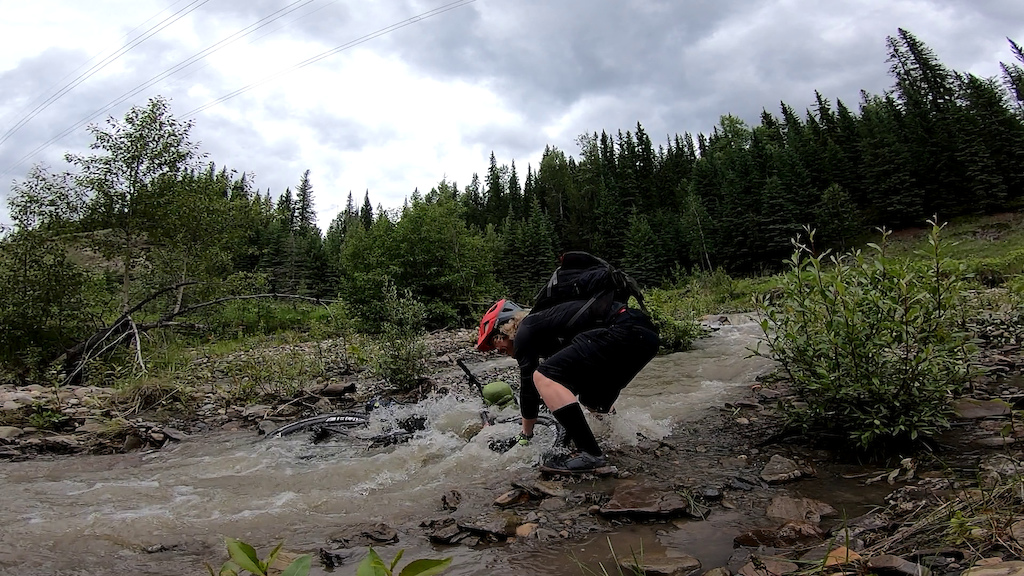 The first big unknown of the trip was about 800m of steep treed mountainside to gain the first of many summits along the ridge, we were packed for one night and two days of riding. As we got closer and closer to the slope, doubt began to percolate amongst the crew as all we could see were thick trees that reached into the low clouds and beyond that, the unknown. 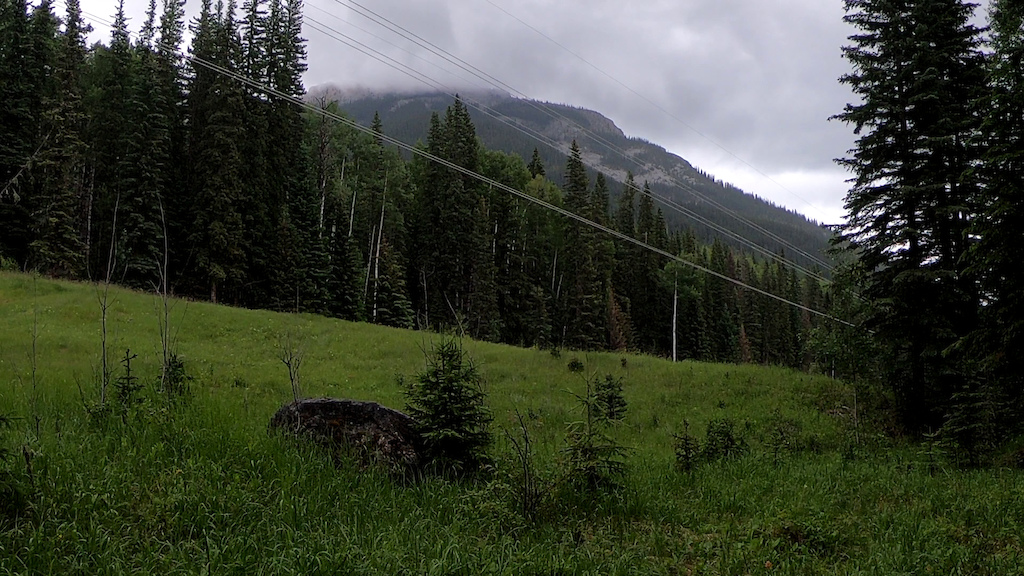 “Well, we have to go up somewhere,” I said, trying to sound confident, “Here seems as good as anywhere.”

I pointed into a steep thick bush and on cue, the rain began to fall on us without consideration for what it would mean for our happiness. The trees slowly began to thin as the slope quickly began to steepen. Water worked its way through all our expensive technical fabrics without a care for brand names or cutting edge technologies. We all experimented with the best way to carry our bikes on our shoulders as the unrelenting steepness carried on endlessly above us. Eventually, we had to stop for the night. When the angle of the slope relaxed ever so slightly for about 50m we decided we better take what we could get. What we got involved digging out tent platforms into something that resembled flat ground. 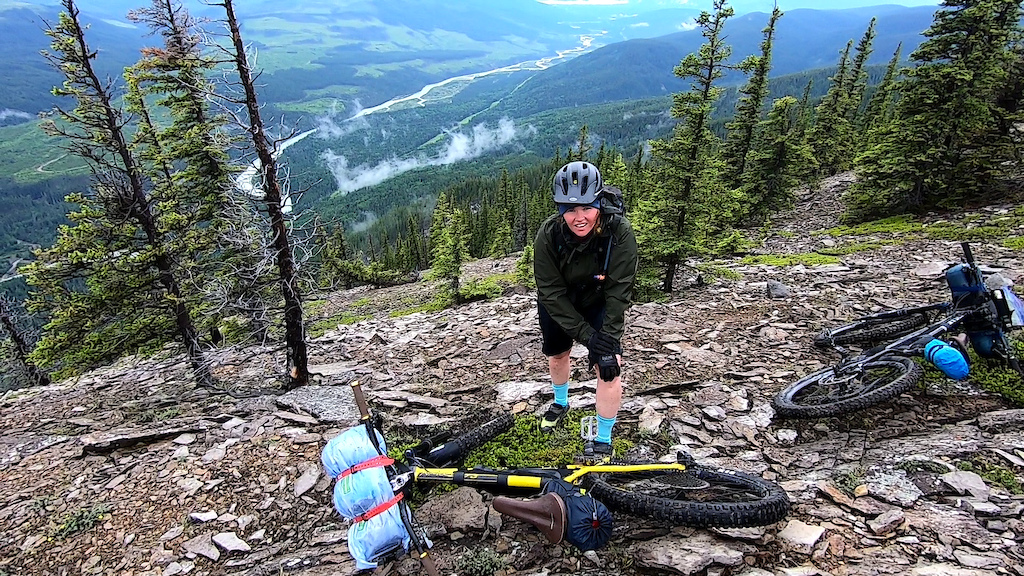 A tired Cheryl halfway up the climb


With much doubt from a crew with low morale, I managed to get a fire going and the rain stopped long enough for us to eat some dinner and begin the process of drying our gear out. We crawled into the tent with warm damp socks, shoes, and chamois. As sleep came to me, I hoped that tomorrow would reward us with good weather and unforgettable riding. 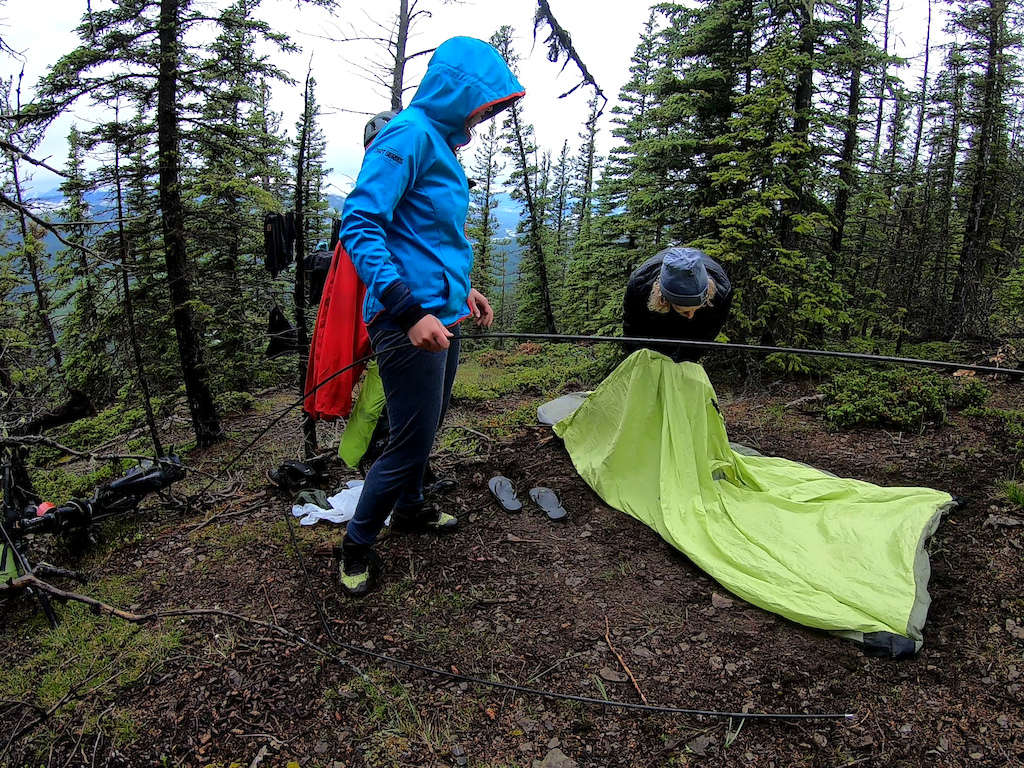 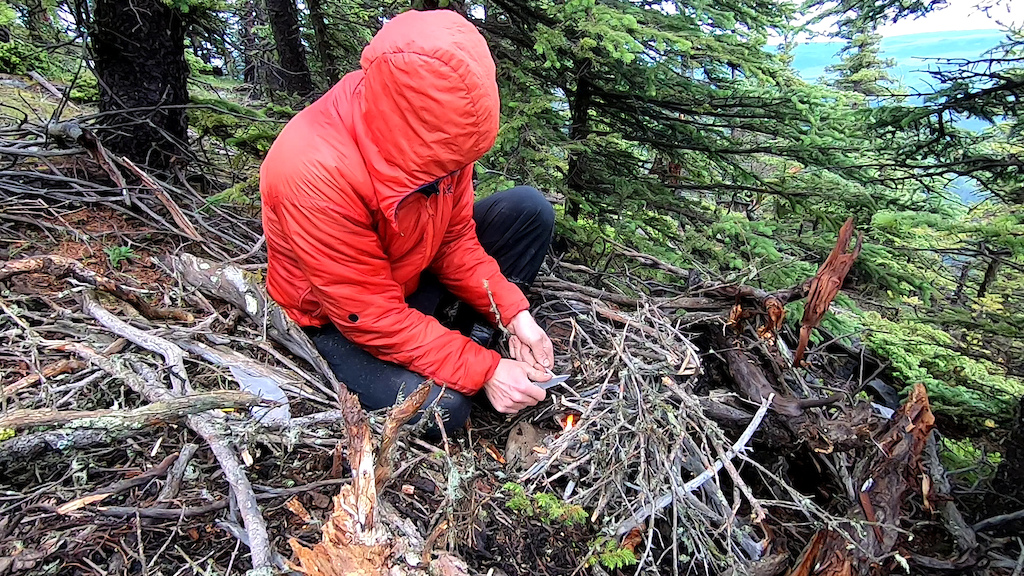 After a long wet climb from the valley bottom, the author successfully proving his bushcraft skills by lighting a fire with sodden wood 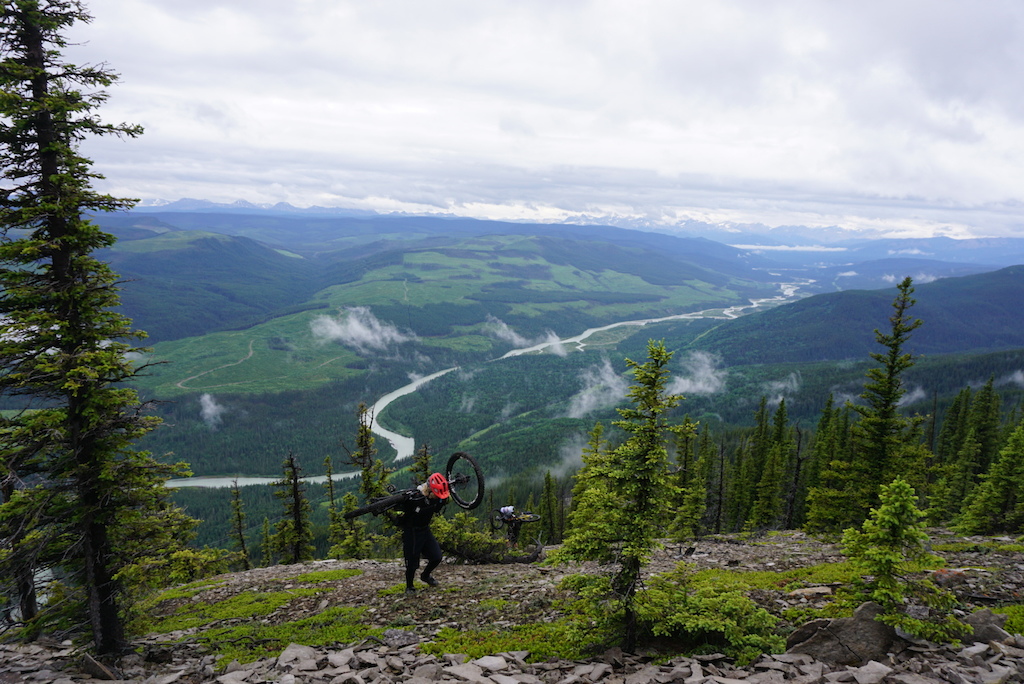 There was a lot of this. Jobbo demonstrating the proper technique for suffering
The funny thing about riding bikes where nobody has ridden before is that all the work involved in getting there may be for nothing if the terrain doesn’t naturally lend itself to bicycles. The ridge would surely be a far cry from the meticulously manicured flow trails we enjoy so much, I just hoped it would be mostly rideable. We woke up, put on damp cold gear, and packed our bike. We realized that we were committed now as to go down the way we came was likely too steep. The crew faked smiles and nervously made jokes as we carried our bikes the last 100m of vertical to reach the first summit. The views were incredible (if you like looking into thick clouds) as we threw our legs over the saddle and rode off down the first slope. 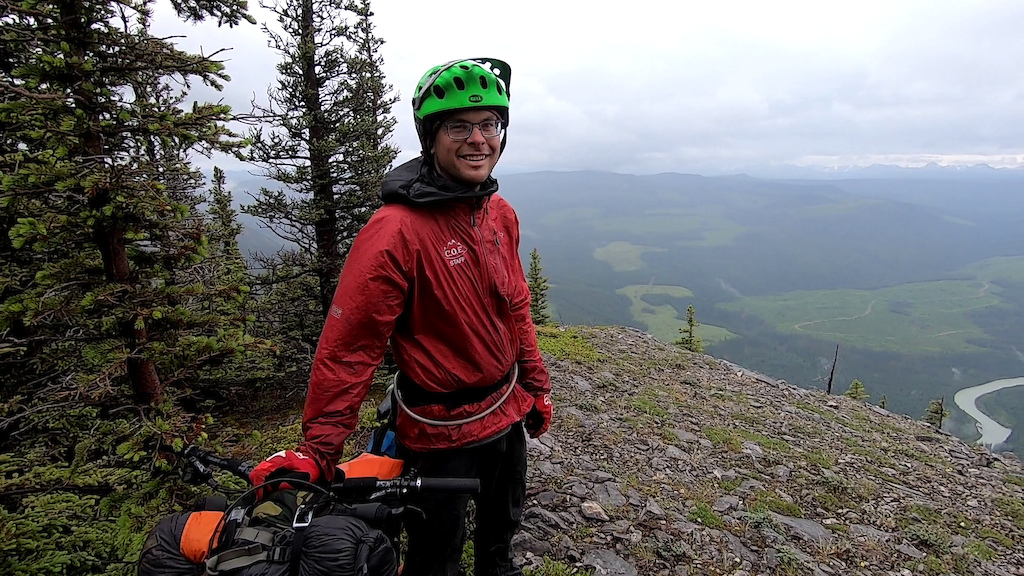 The author, looking relieved to have made it through the first piece of unknown terrain

It was good! While not the buff machine built trails of Whistler or even the established single track of the south Chilcottins, it was unmistakably rideable! The clouds lifted and the rain held off as we pushed up to sub summits and rode off, sometimes side by side, hooting and hollering down unridden mountain slopes. The psych elevated all day as the riding got better and better. From long grassy slopes to technical rock gardens to exposed side hill game trails and scree slopes that mountain bike tires had never touched. Memories of the previous days efforts melted away to the background. 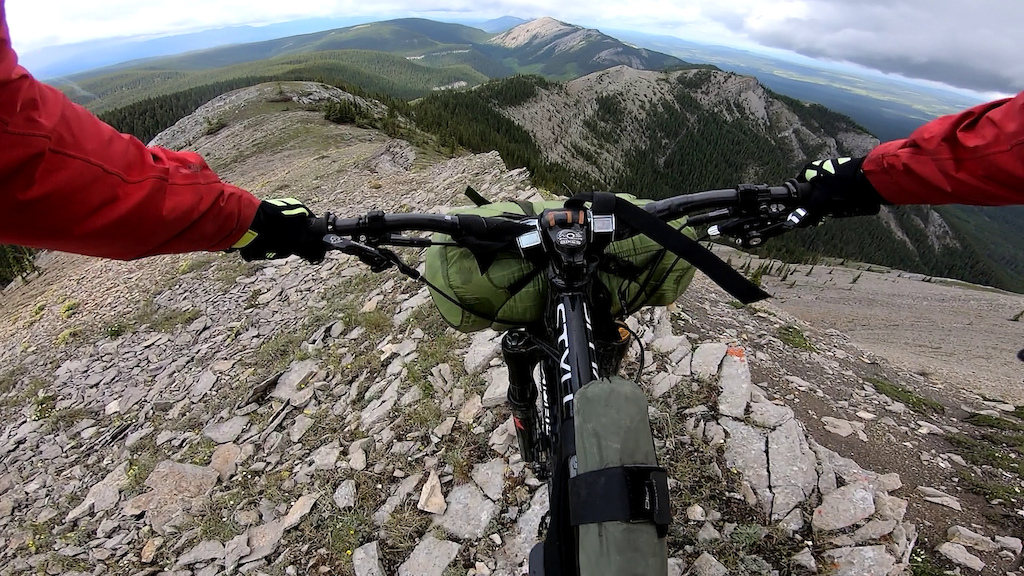 the nature of the riding as seen from Jobbocam 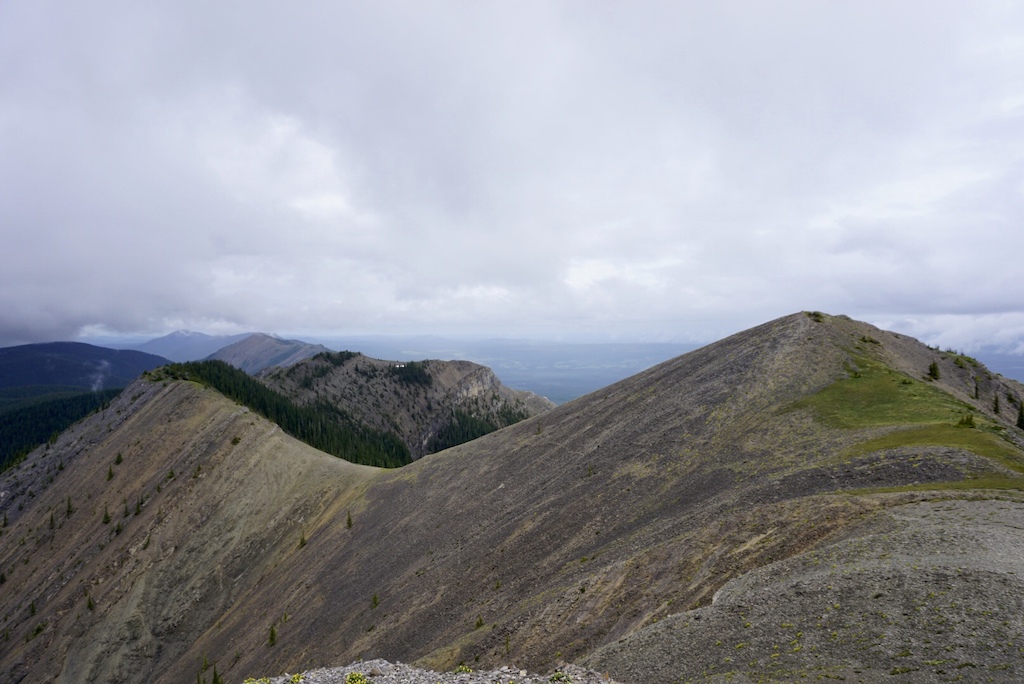 This is what we came for 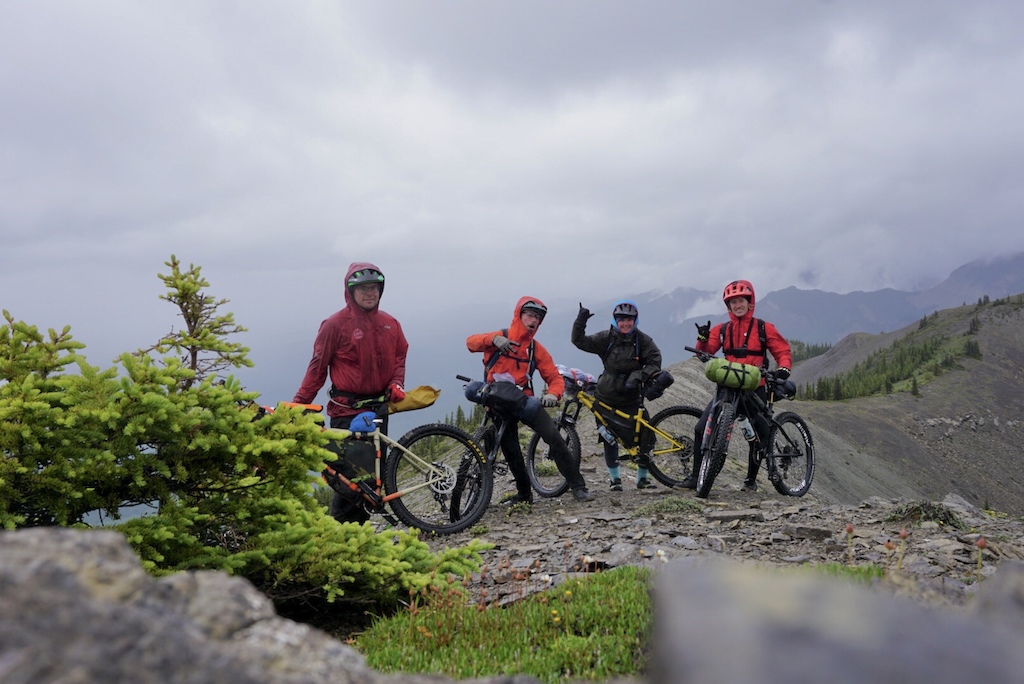 The crew mid ridge. Memories of the day before evaporating like the water on the ground 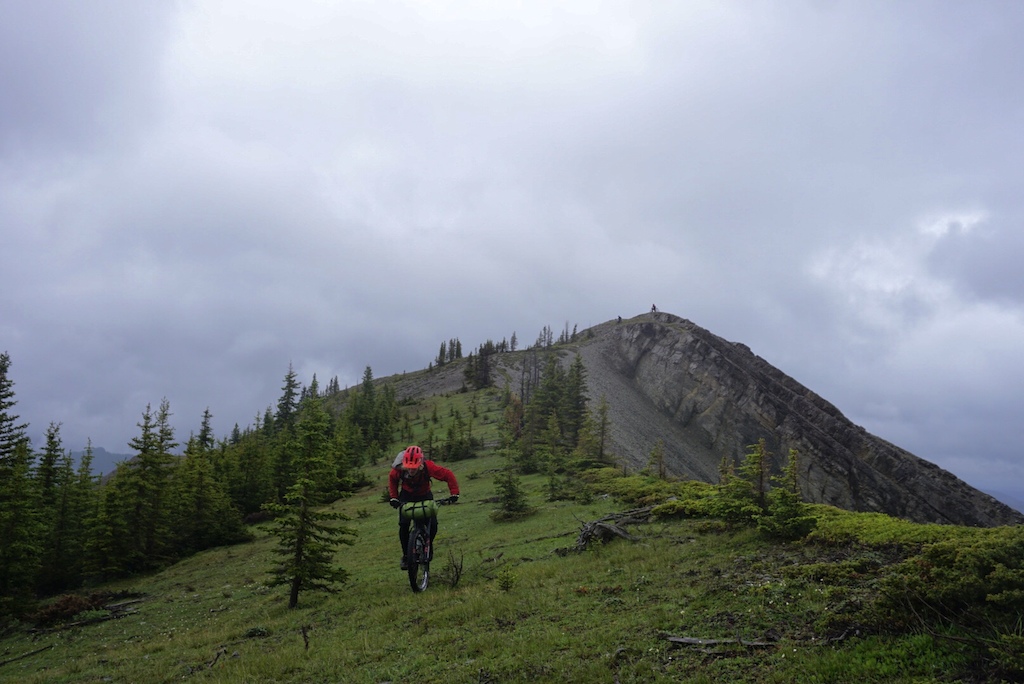 Jobbo, flat out early on the ridge 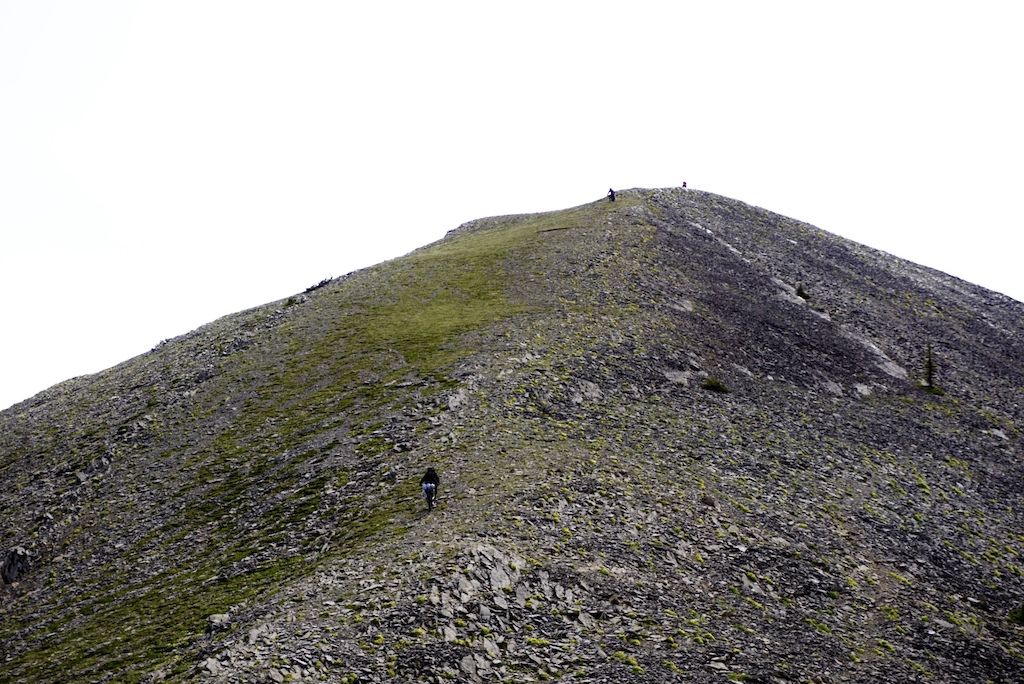 The steep descent from the highest point on the ridge 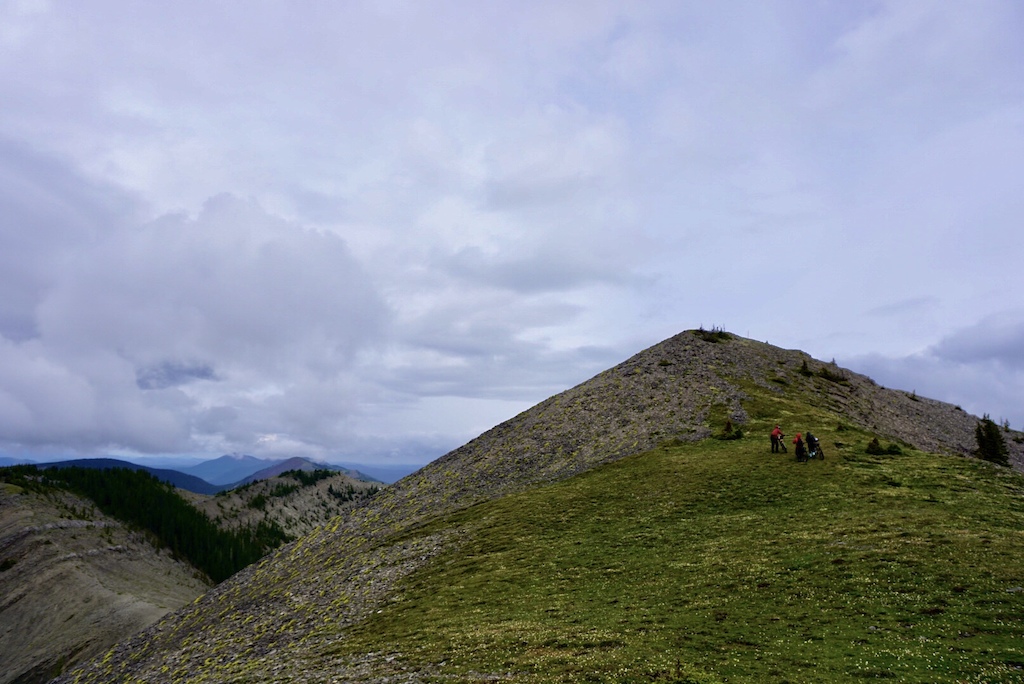 Pushing up yet another sub summit 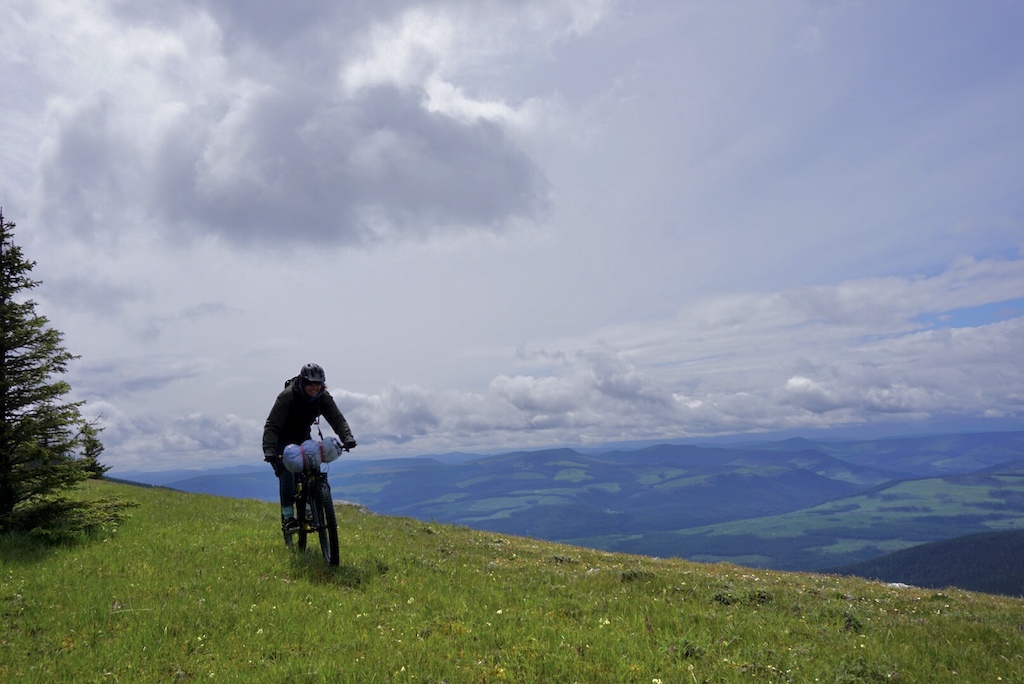 Cheryl, all smiles after another great descent
After a wild descent from the highest point along the ridge, we worked our way to the piece of terrain that had been concerning me all day. I had hiked up to the highest point on this ridge before, years ago, in the snow. I had no idea if the way I had descended from the peak in the winter would be a straightforward ride through sparse trees or a soul-sucking bushwhack. 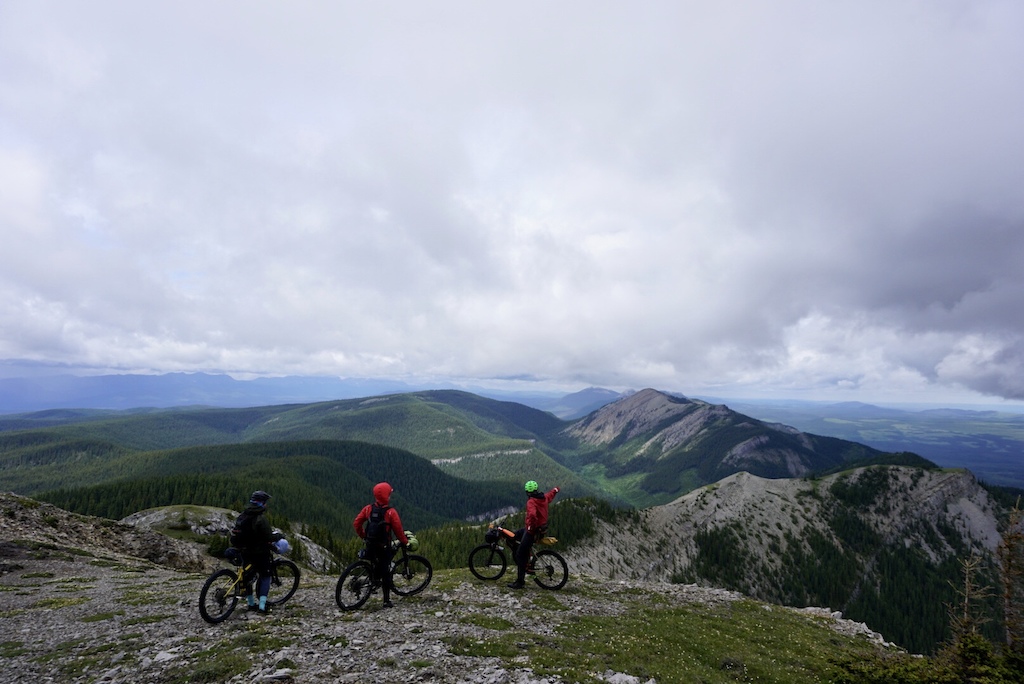 Looking towards the final piece of the ridge
Things looked good as we slowly picked our way out of the alpine and into the trees. Now nobody would mistake this for a trail by any stretch of the imagination, but as we worked our way down to valley bottom I was reminded of tree skiing. It was choose your own line terrain down sparsely treed slopes. Eventually, the dream was over and we dismounted our bikes and began to pick our way into thicker and thicker bush. Our high spirits would surely disappear as I mentally prepared for the inevitable bushwhack out to the road.

Logan was in the lead and shouted back sarcastically, “Oh no! Someone has ridden here before. There goes our dreams of a first!”

We rushed up to join him and saw an unmistakable trail freshly cut into the moss by a dirt bike. I couldn’t believe our luck! We tore off down the trail in what would be some of the best riding of the trip. The singletrack led us all the way to the logging road that would be our easy egress to civilization, and cold beers stashed in the creek by our vehicle! 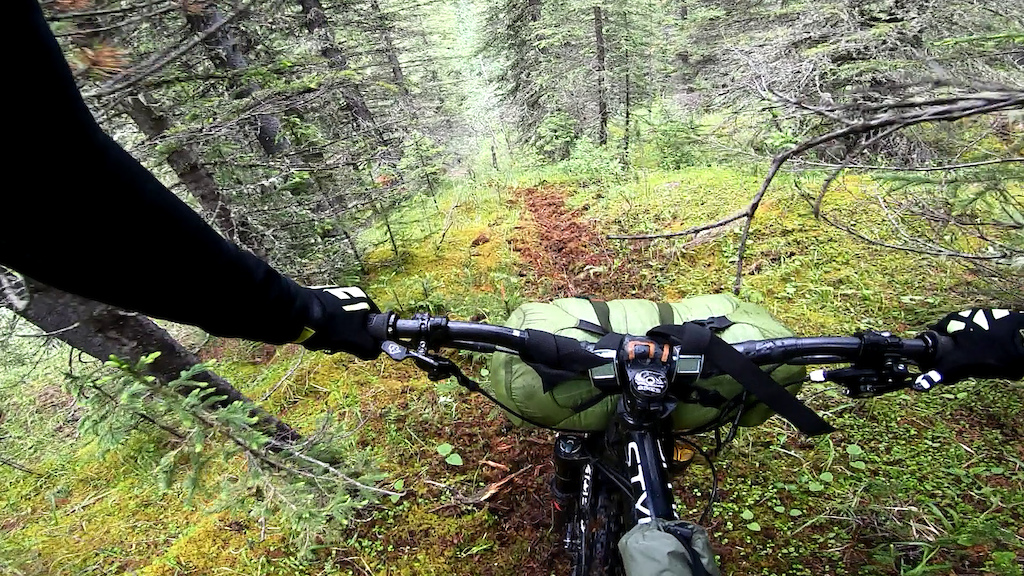 An unlikely end to the ridge, faint single track we got lucky enough to stumble upon

But the unknown had one last surprise for us as we joyfully rode off down the logging road thinking we were home free. After a kilometre or two, our freshly graded longing road turned into a mucky mire that only ATVer’s long for. Our bikes began to bog down and eventually the drive train on Cheryl's bike clogged up so badly that she couldn’t pedal anymore. Logan and I kept pedalling to retrieve the vehicle and came back to pick the other two up. Beers were cracked and the reminiscing began! 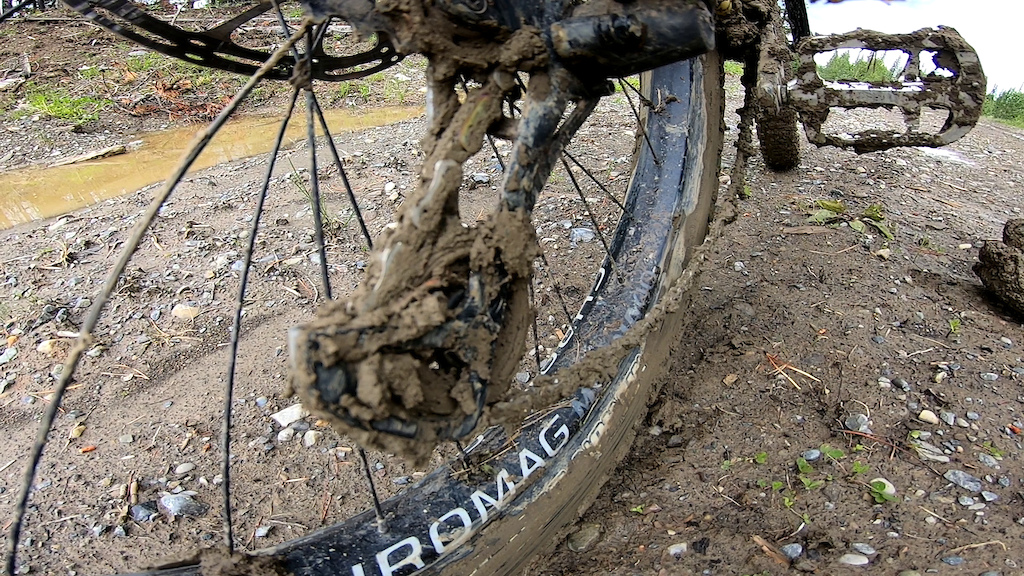 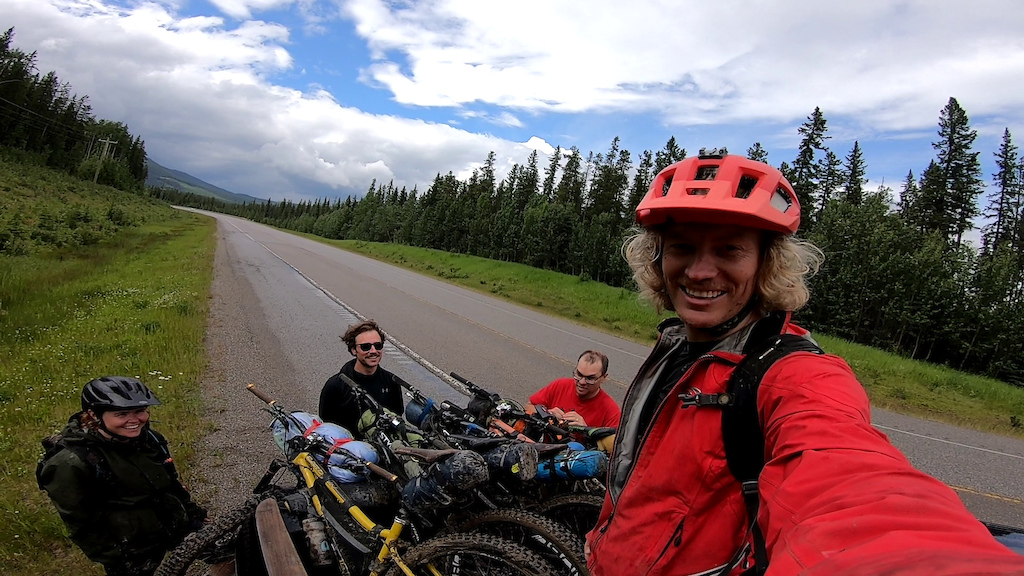 A cheery crew happy to be back at the truck

Back home in my warm house, I feel grateful for the misery and the joy we were able to experience on this adventure. Ticking off a line that lived in my imagination for many years feels great and knowing that it is possible to go where no trail exists floods my mind with possibilities. But mostly I’m thankful for friends who are willing to follow me into the unknown and when all is said and done, embrace the suck. 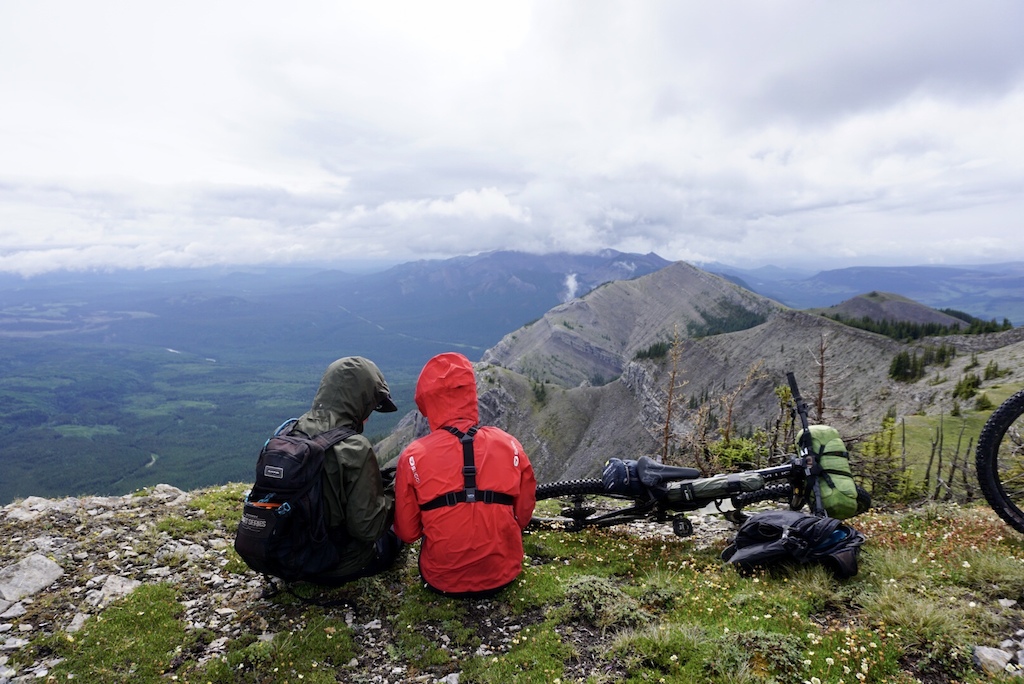 Embracing the moment in the thick of the adventure

A special thanks to the crew for indulging my adventurous side. Logan Hurd for the photos, Micheal Jobson for filming and Cheryl McClorey for filming and editing. A shout out to Chris Robinson at Dogtooth packworks for getting us all kitted out with bags.

djaugust (2 days ago)
I found myself envying the suck at the first creek crossing.

Hopeful see you and the step van around the hills soon!

cherylmcclorey (1 days ago)
Look at us. We've made it. Can't wait for the next trip.

marthinpercamp (1 days ago)
I’d love to do that kind of Epic trip!!

Bike-guy2323 (2 days ago)
The crew was on a mix of stylus, rootdown and wide angle. All chromag