Last month, SR Suntour gathered as many of the 2021 USA team that could make it and we hit Southwest Utah for a training and tuning camp and to get the family together. Products were tested, suspension was tuned and we mixed a bunch of riders of various disciplines into one awesome riding experience. Here’s the result: 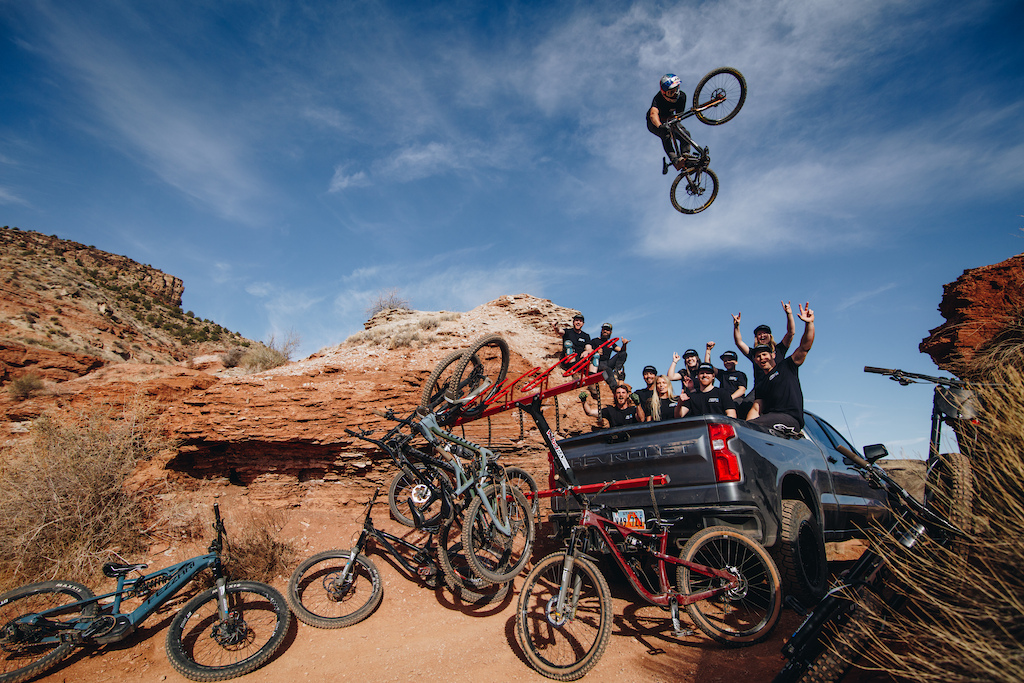 “Another company doing the same trip to Virgin Utah” was 100% the premise of this trip. From starting the edit using the quintessential “SAIL” song to an overabundance of much slow motion, the MTB formula has been written and we were going to follow it to a T.

However, when the cast got together in a rented out AIR BNB a different story began writing itself. Circus members and Rampage Elites were now at the same table eating freshly prepared meals with master mechanics and progressive characters and they were all getting along. In fact, they seemed to enjoy being around one another. The house looked closer to squatters on BLM land than the beautiful neighborhood we engulfed. Gigantic full-sized vans encompassed every available inch of the property and bonfires and South Park movies were played as loudly as possible.

The trip turned into a punk rock array of fast riding and friendly banter. Everyone pushed one another and the level of tricks going down in the desert for that week was memorable. The crew traveled as one as the cameraman was berated constantly with horrible editing ideas and constant peer pressure to not use slow motion.

We know once the FPV drone crashed early on, that this was going to be a unique session. In the end, we were still able to use that played-out song, a fake voice over, and too much slow motion. The fun had that week was captured in the edit is presented in a way that expresses the personality of the crew for the week. It was quite simply, fun! " - Micah Kranz 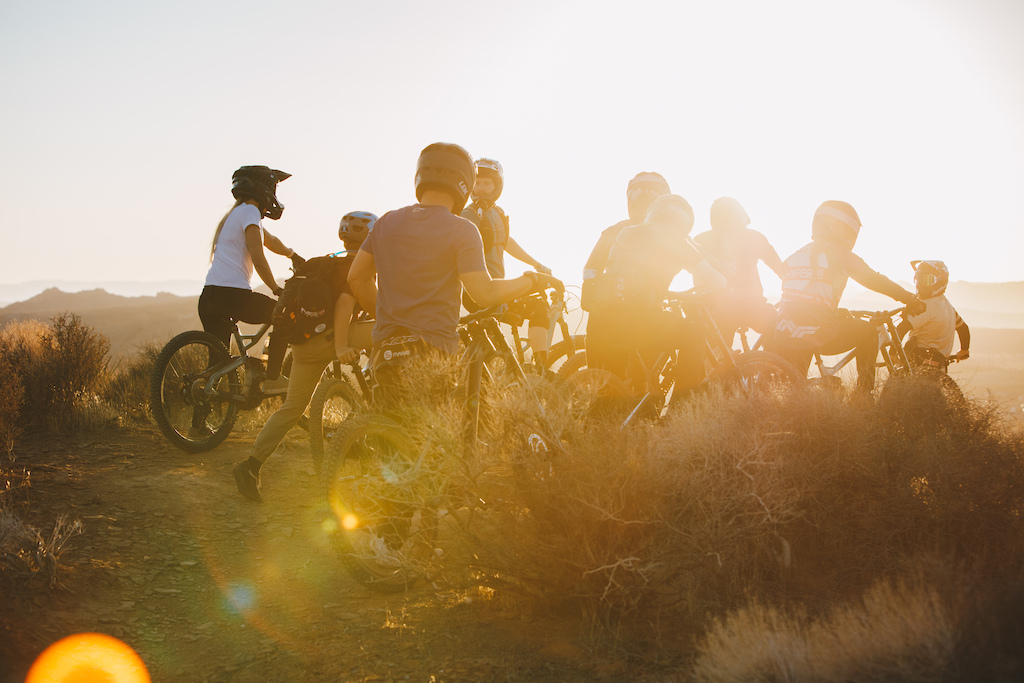 Most riders hadn’t seen each other in quite a while, and a few have never met at all. It was great to have everyone reconnect so early in the season. SR Suntour considers our riders family and it’d been too long since we all got to spend time together! 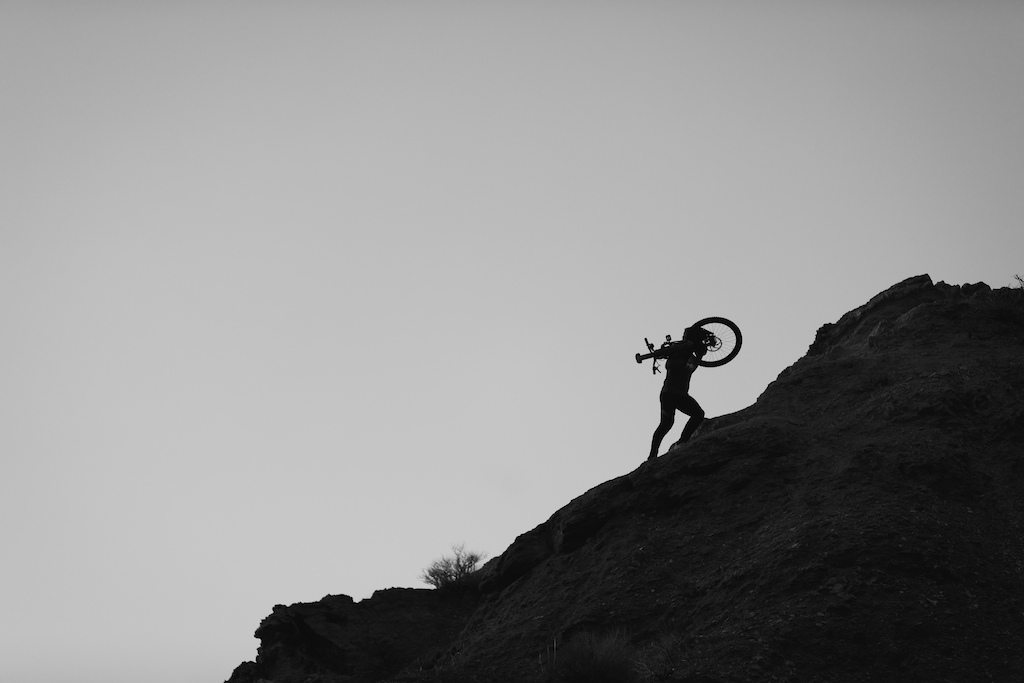 Mick Hannah was keen to get on his bike as soon as he got out there. He’s switched to NS Bikes this year and wanted to get as much time on it as possible. He was typically one of the first riders at the top of any run ready for the action. 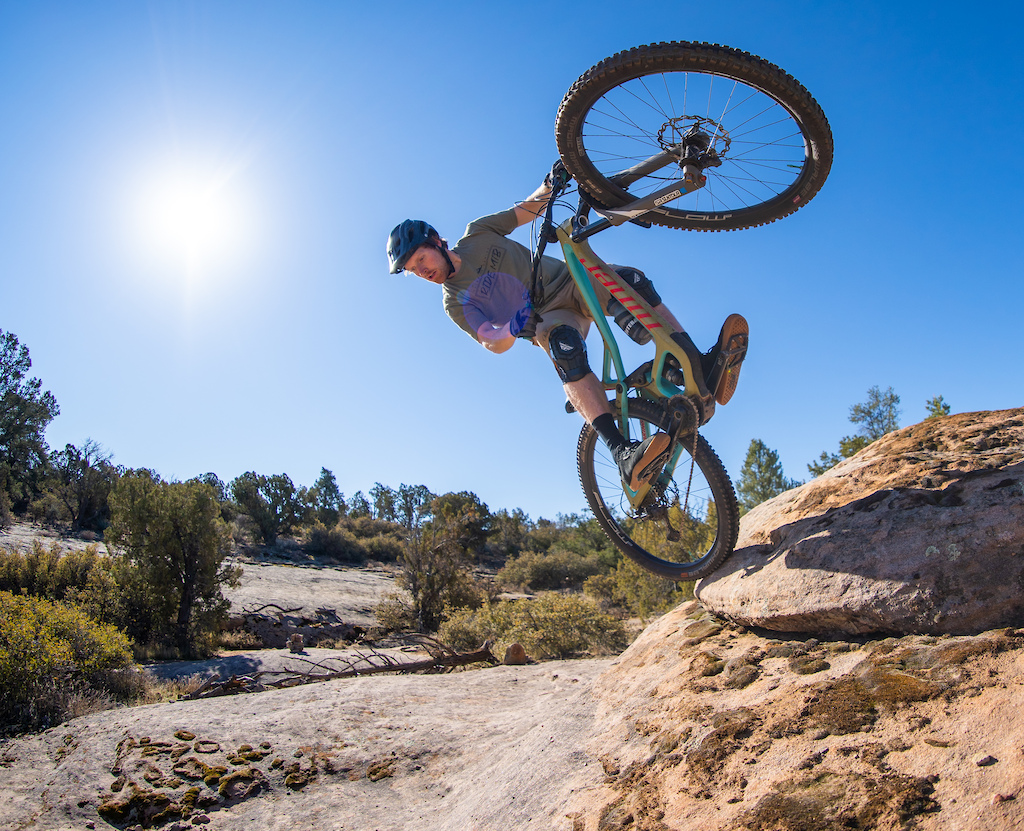 While Virgin UT is known for its freeride scene, close by, there were plenty of options available for everyone to spin some cranks on the trail bike as well. Kyle Warner always has a way of picking out creative lines that no one else sees. He’s one of SR Suntour’s longest-standing athletes and is incredibly tuned in. 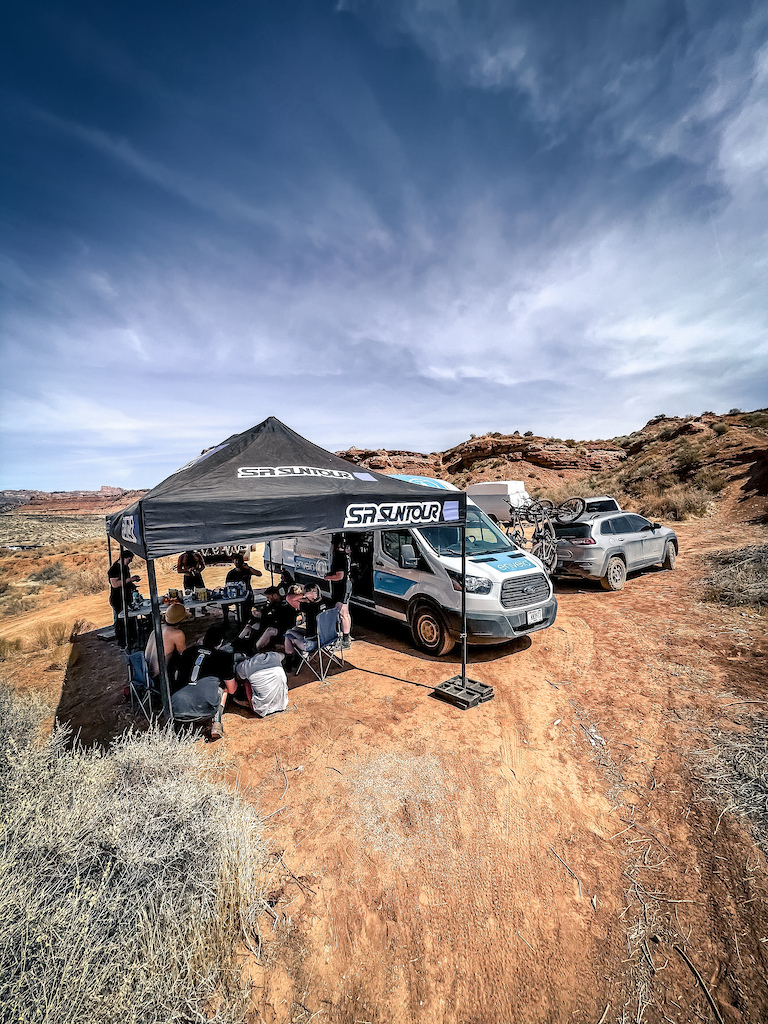 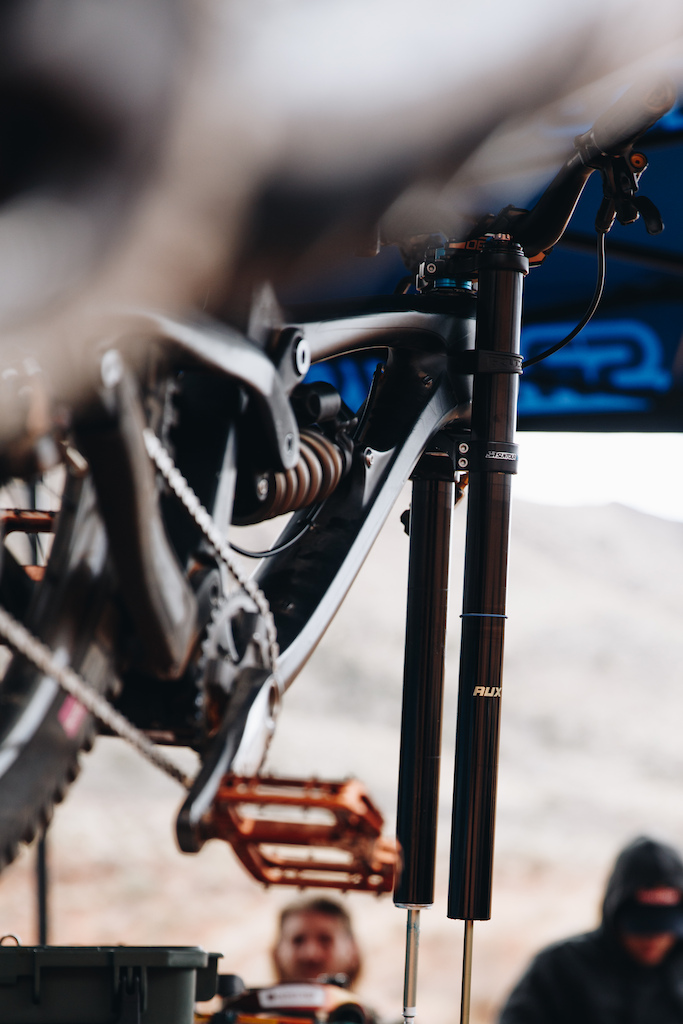 Early on in the trip SR Suntour made sure everyone was happy with their setups and spent time with each of the riders discussing how they may fine-tune the ride for the upcoming season. The tent would become a place of sanctuary as the trip progressed. 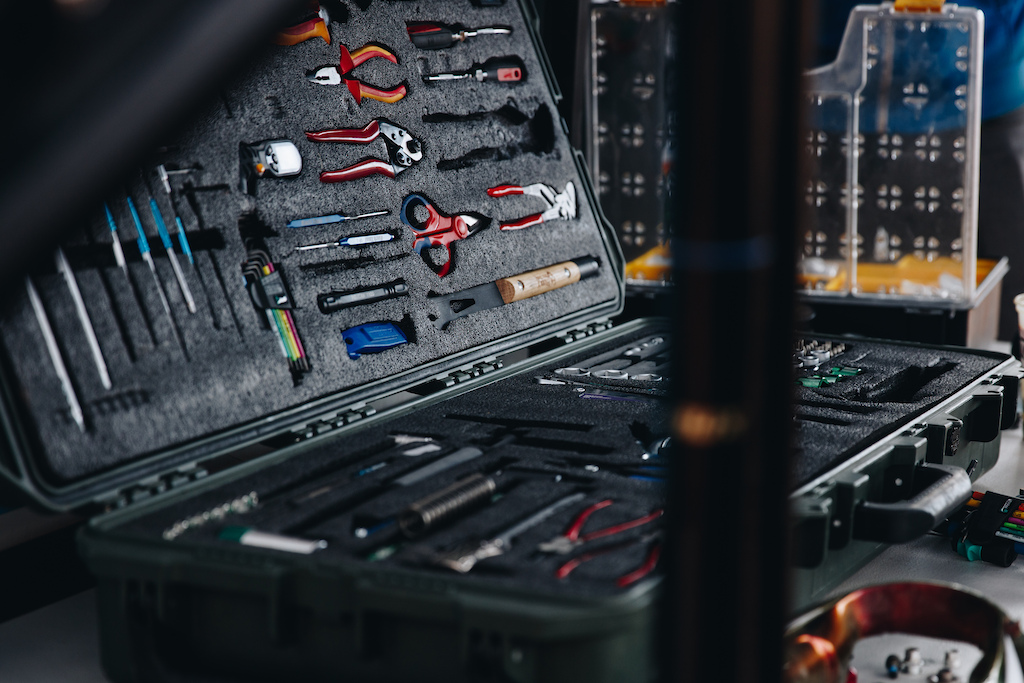 SR Suntour came fully equipped to make changes to all setups. SR Suntour Team Manager Jon Wells has put together quite the toolbox which came in handy for those that enjoyed tinkering. 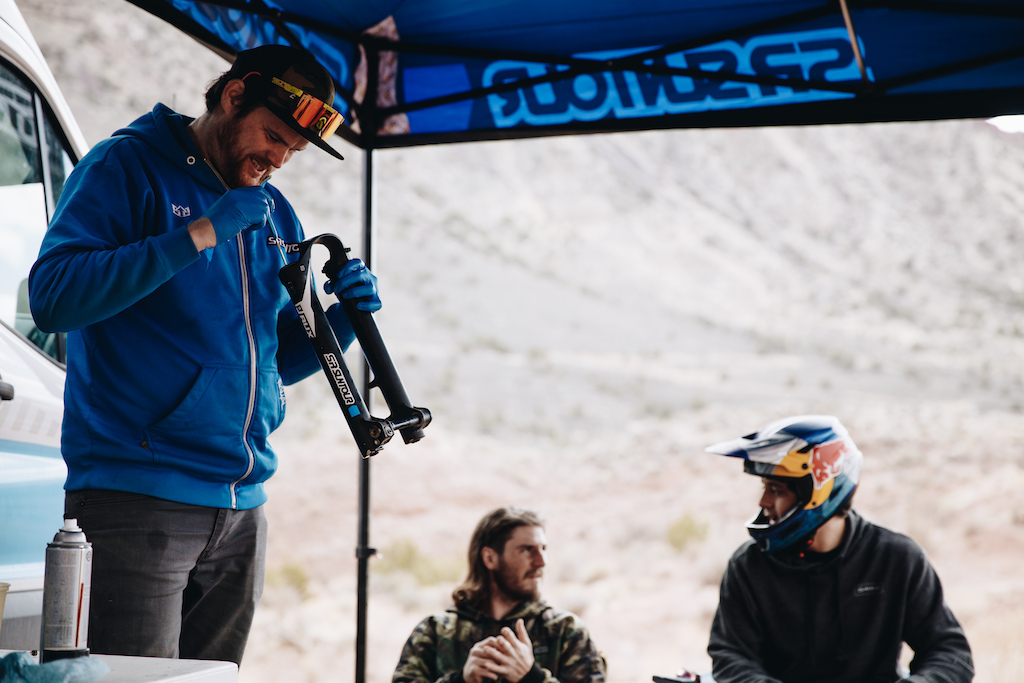 A quick refresh was in store for the two hard chargers in the background, Kurtis Downs and Carson Storch, along with a few new things for them to try out. Jon got them sorted quickly so that they could both get back up the hill. 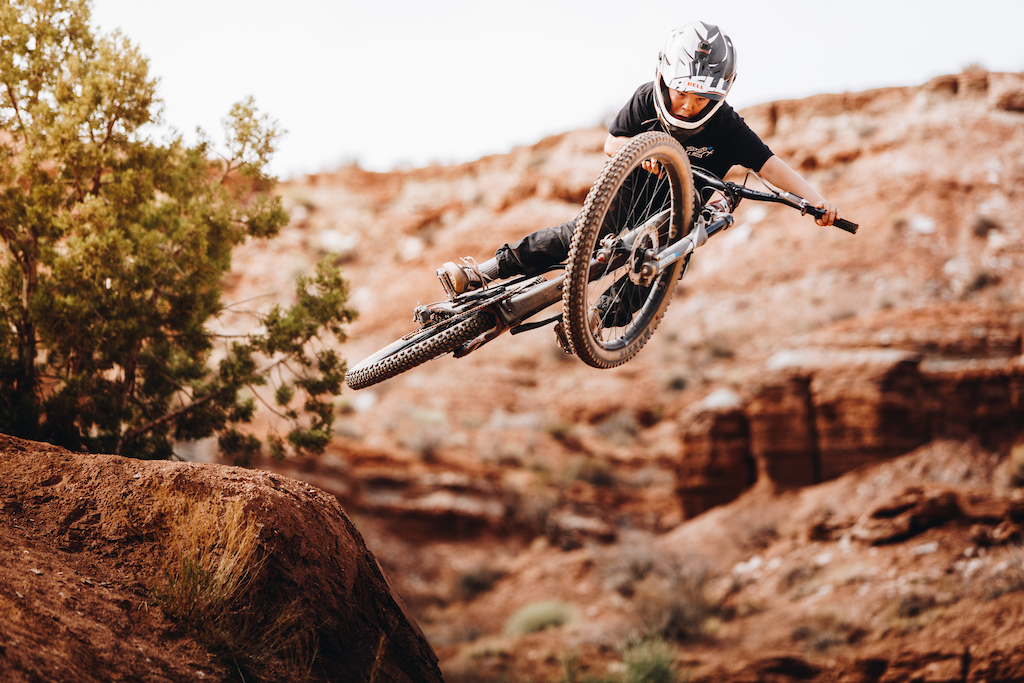 Duke Hannah, nicknamed Free Range, quickly became the star of the trip. He was throwing down some natural style in an area he’d never set foot in before. The level of progression we saw out of him over the course of the week was inspiring to say the least. Watch out! 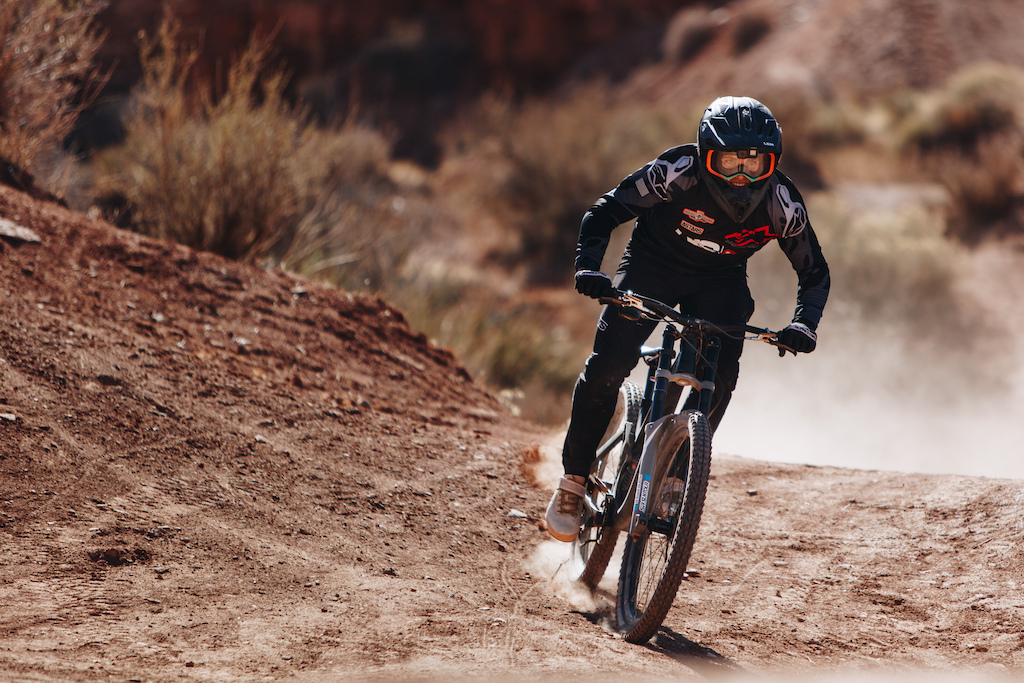 While he may not have been on a world cup race track, Mick looked plenty comfortable in the desert and he threw down a couple of very quick runs on some of the many ridges. Take a guess how fast he got down the 2015 Rampage site? 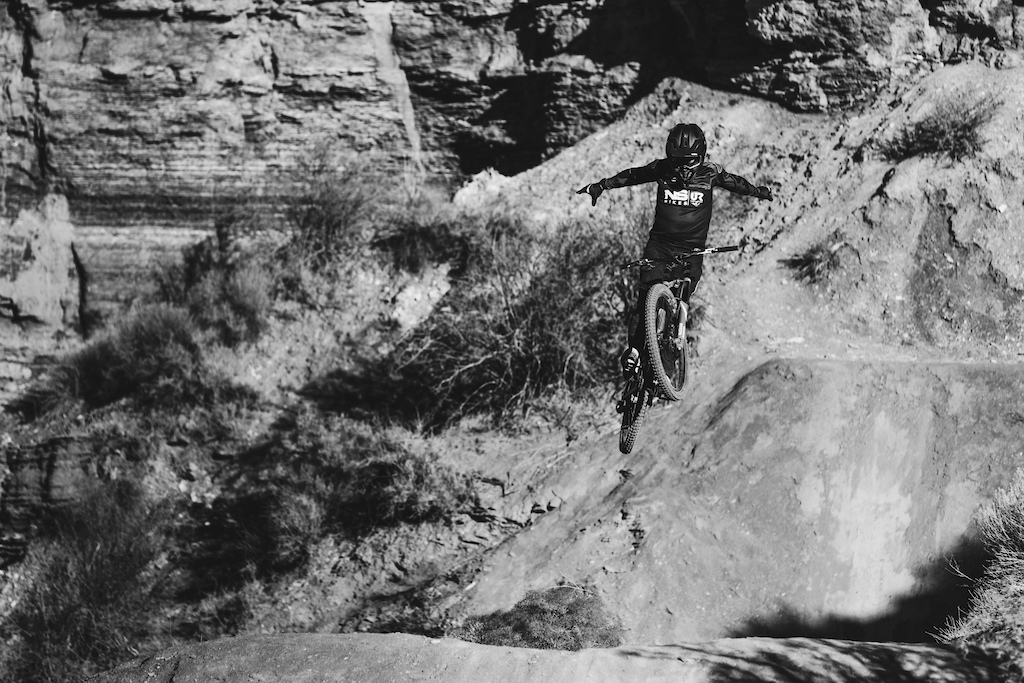 Mick threw out his signature no hander on nearly every zone we hit during the week which was impressive in its own right but the most impressive was when he continued to do it in the windiest conditions. This man has some confidence. 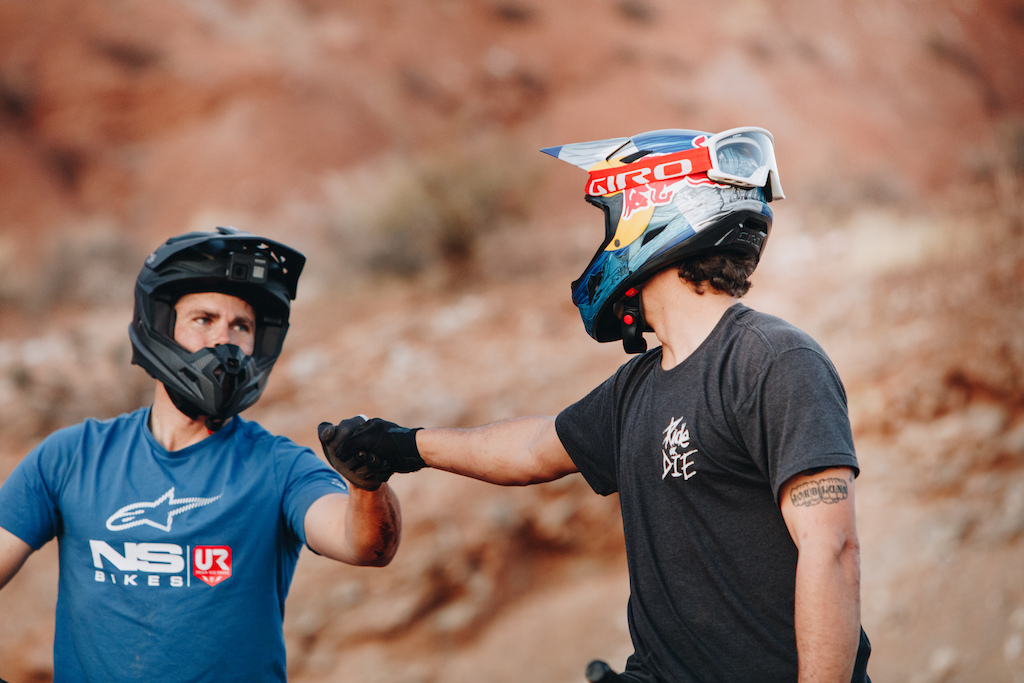 There was a lot of respect between these two (Mick Hannah Left, Carson Storch Right). Both have some serious experience behind them in different disciplines and it was great to see them sharing their knowledge with others. 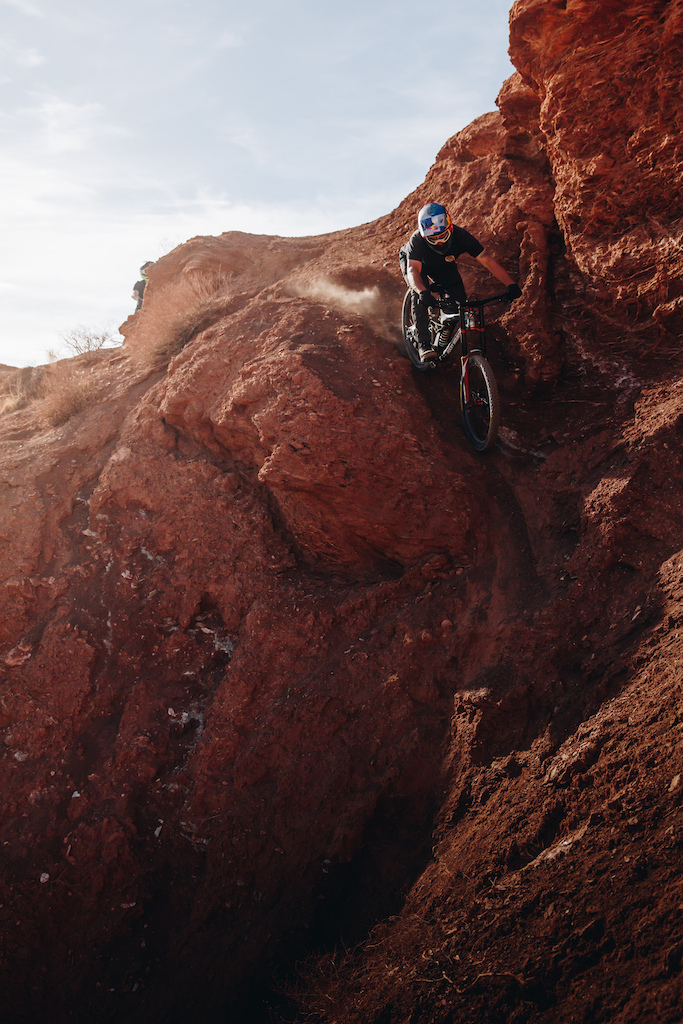 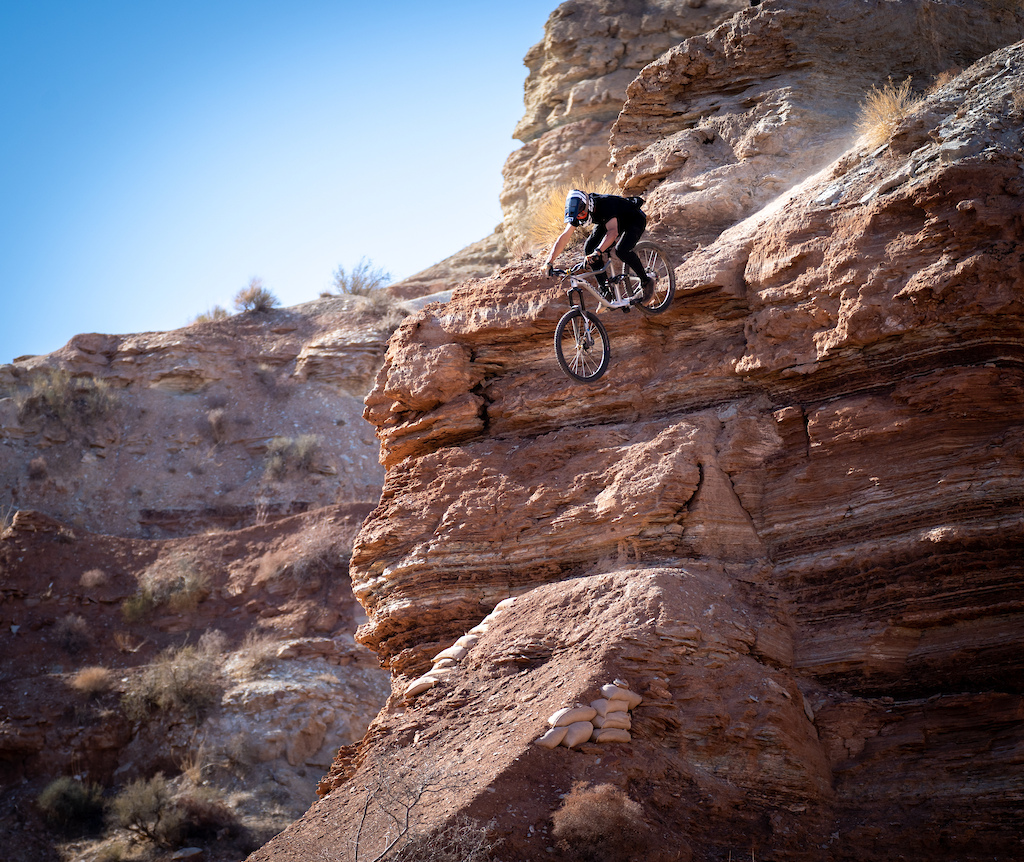 Carson (Left) has spent significant time in Virgin prior and had some great areas to show off to the rest of us. He was quick to drop into some big features with others, such as Dylan Crane (Right) quickly following suit. 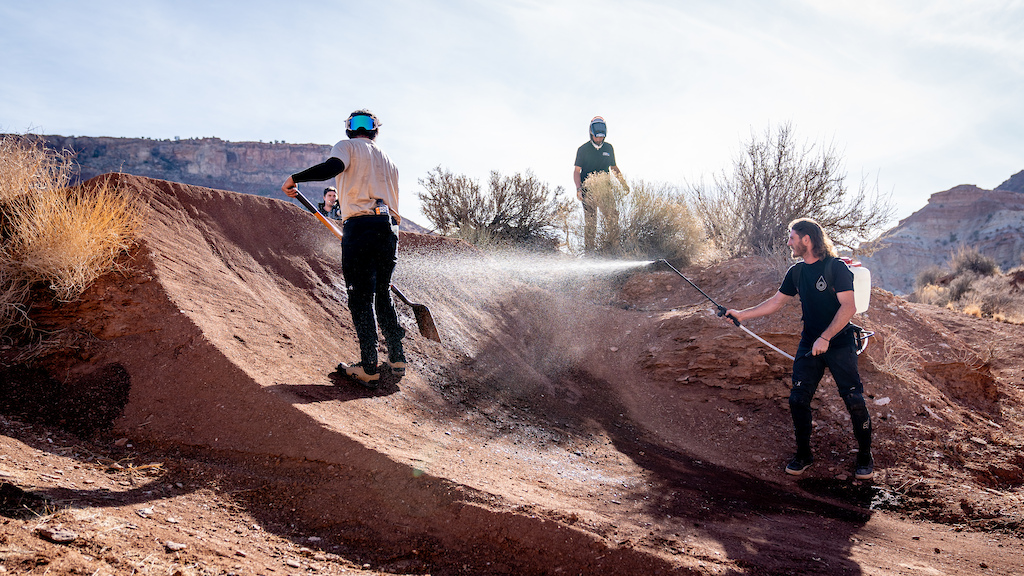 There was a great team effort to make sure everything was watered and packed before every session. With everyone pitching in it meant that the crew was able to get back to riding quickly. 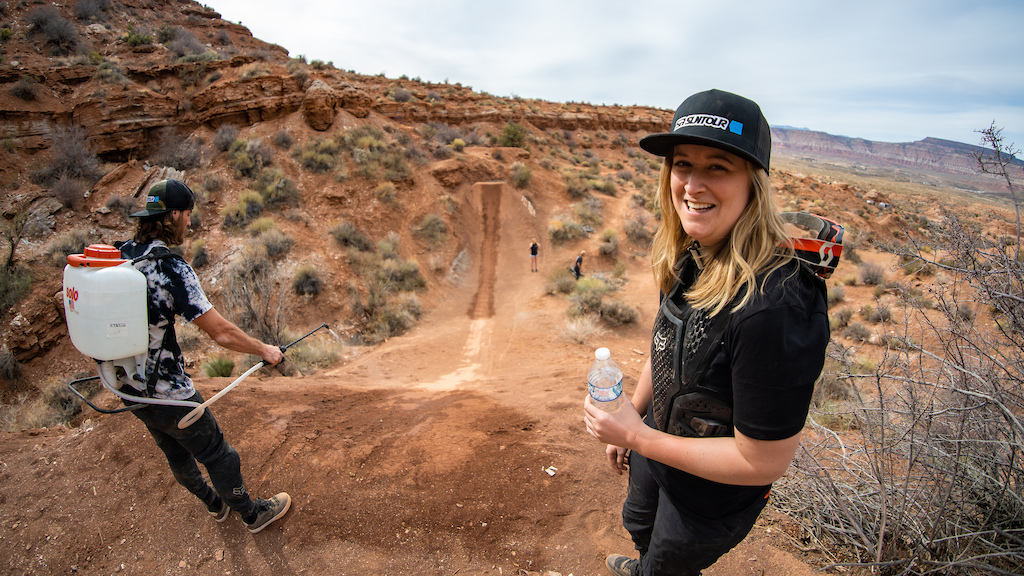 This feature was a big goal for Brook Trine who is looking to take the leap into women's freeride. This was her first week ever on a DH bike and she pushed herself hard to progress to the point of feeling comfortable on a jump of this magnitude. Nerves were definitely high to begin with but by the end she was hitting it perfectly! 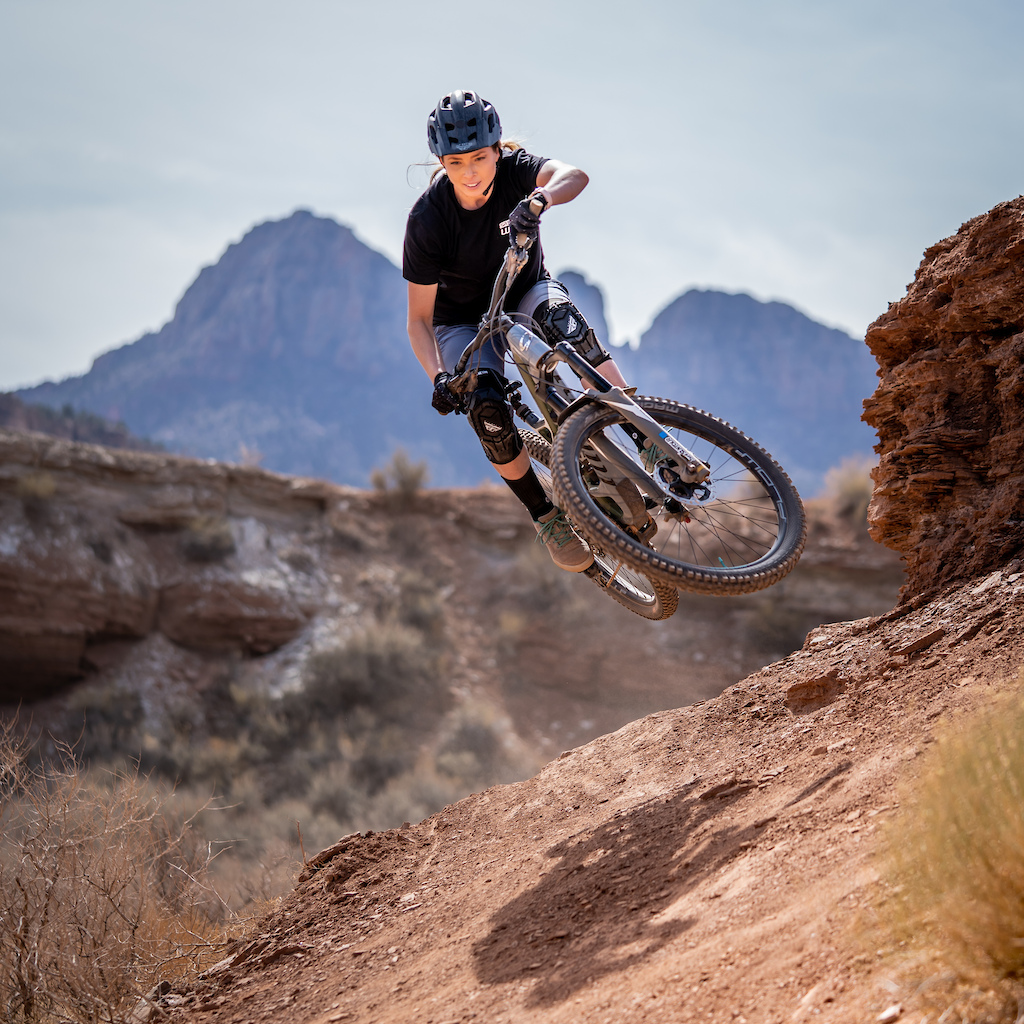 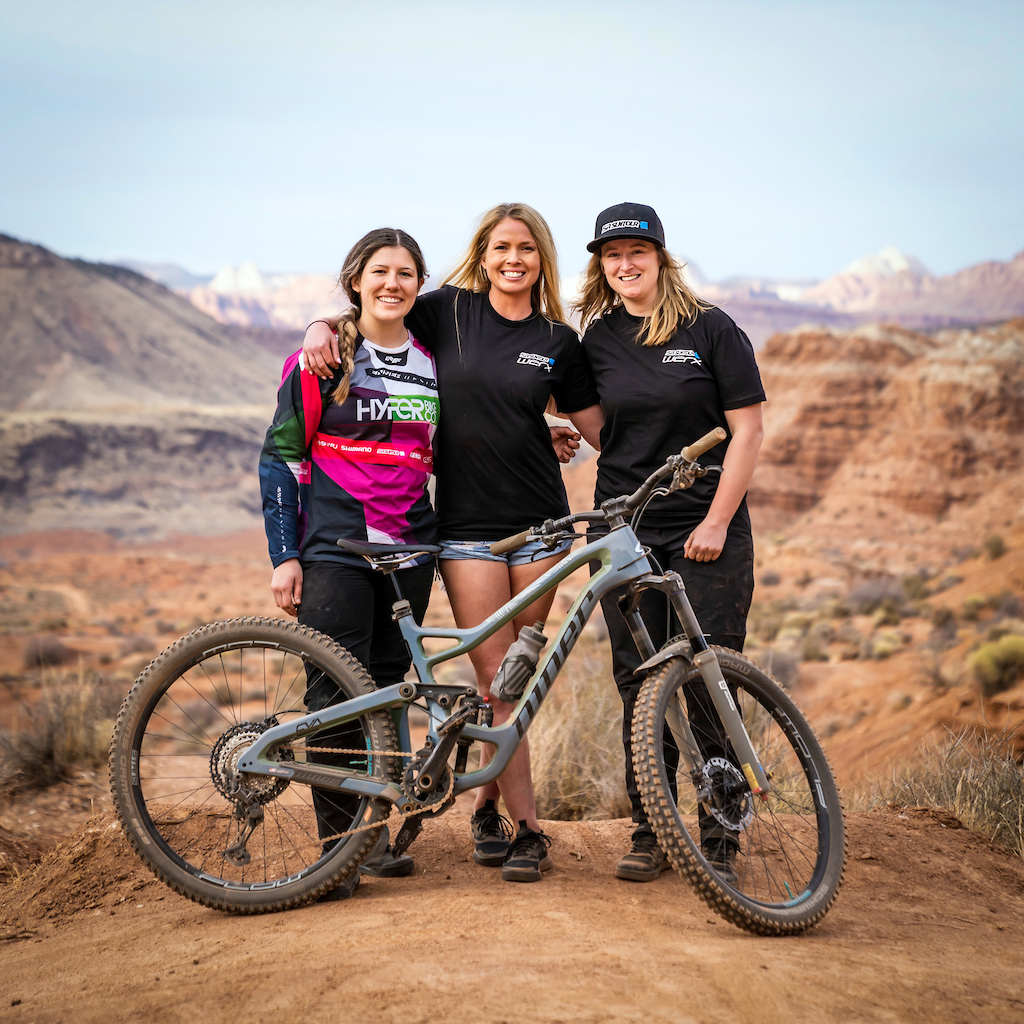 We are so fortunate to have such a great group of women representing SR Suntour and working to help progress women in mountain biking. April (Left), stepped it up in the land of freeride which is certainly different from what she typically rides, but she has an incredible mentality towards learning new skills. 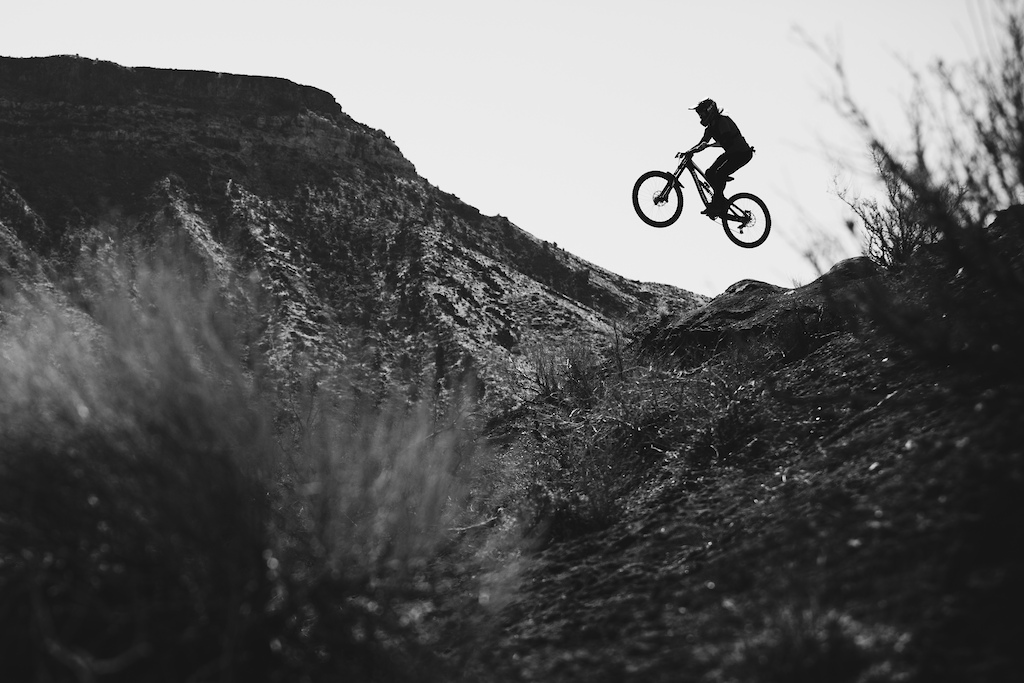 Brook hitting one of the step downs at the old Rampage site. Virgin was new to all of the women on this trip yet each one of them were incredibly enthusiastic as perfect examples of the type of characters SR Suntour enjoys working with. 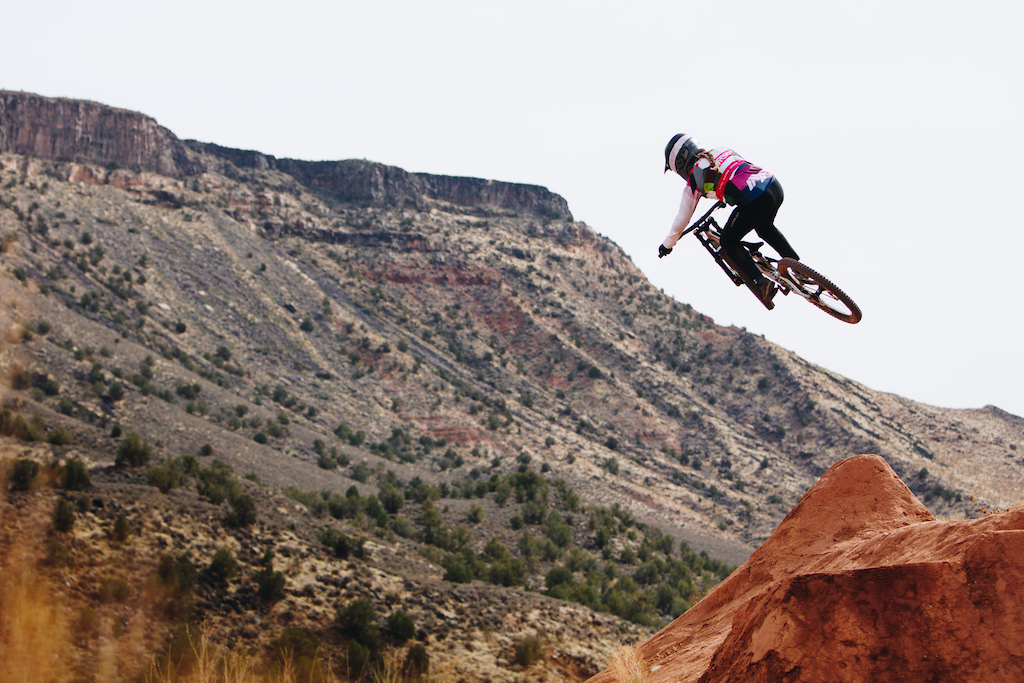 Jordy Scott has a background in BMX racing and is one of the top riders on the Crankworx tour. While she may race full-time and still be in school, she can certainly throw down some air style as well and made short work of some of the large features out in Virgin. We can't wait to see her hit the circuit this year. 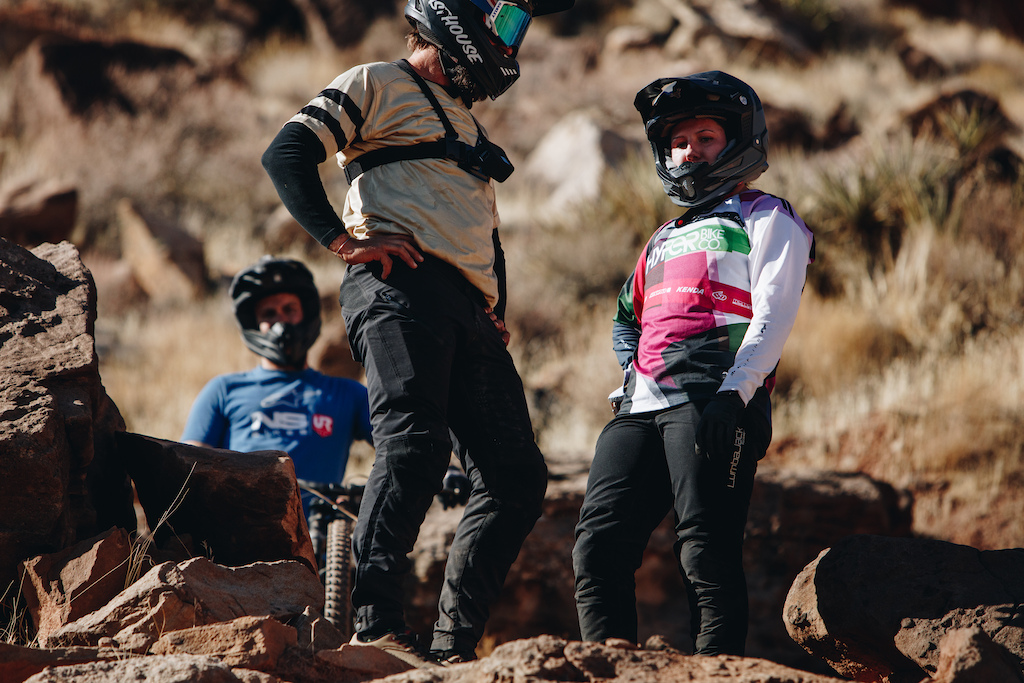 Mikey Haderer (Left) and Jordy Scott (Right) exchanging notes and letting the arms rest after showing their respect to the legend Jordie Lunn with some pushups before dropping into the infamous King Kong “trail”. This trail can become a little bit dicey when the wind picks up which meant there were only a few laps on the day. 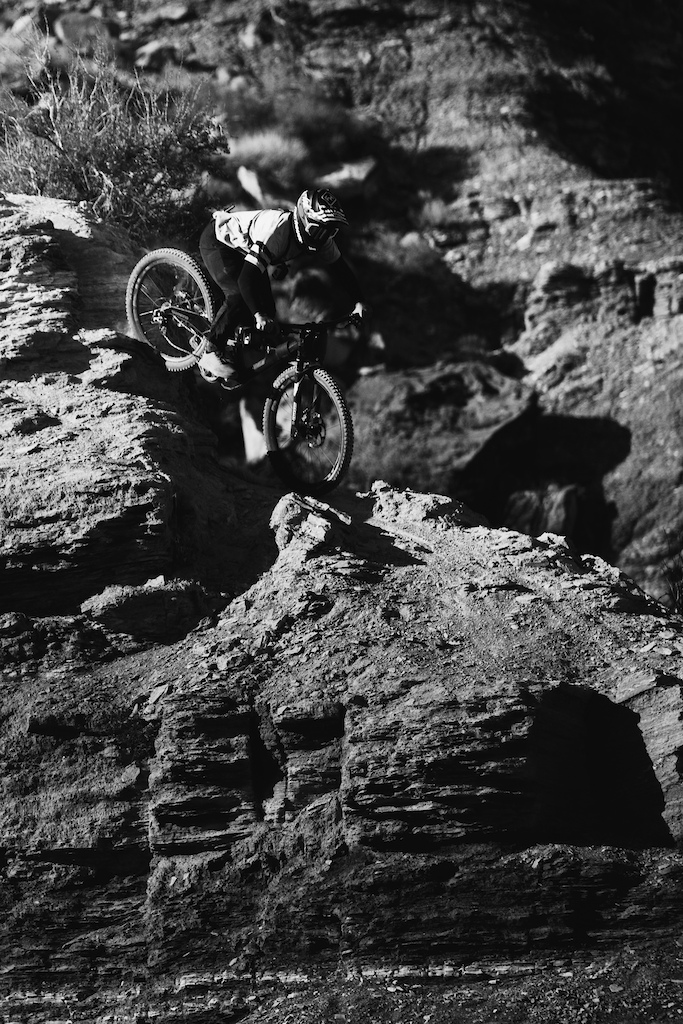 Mikey cleaning one of the more techy sections of Kong. What you can’t see behind the 12-inch ridge is a sheer cliff making this an absolute no fall zone. 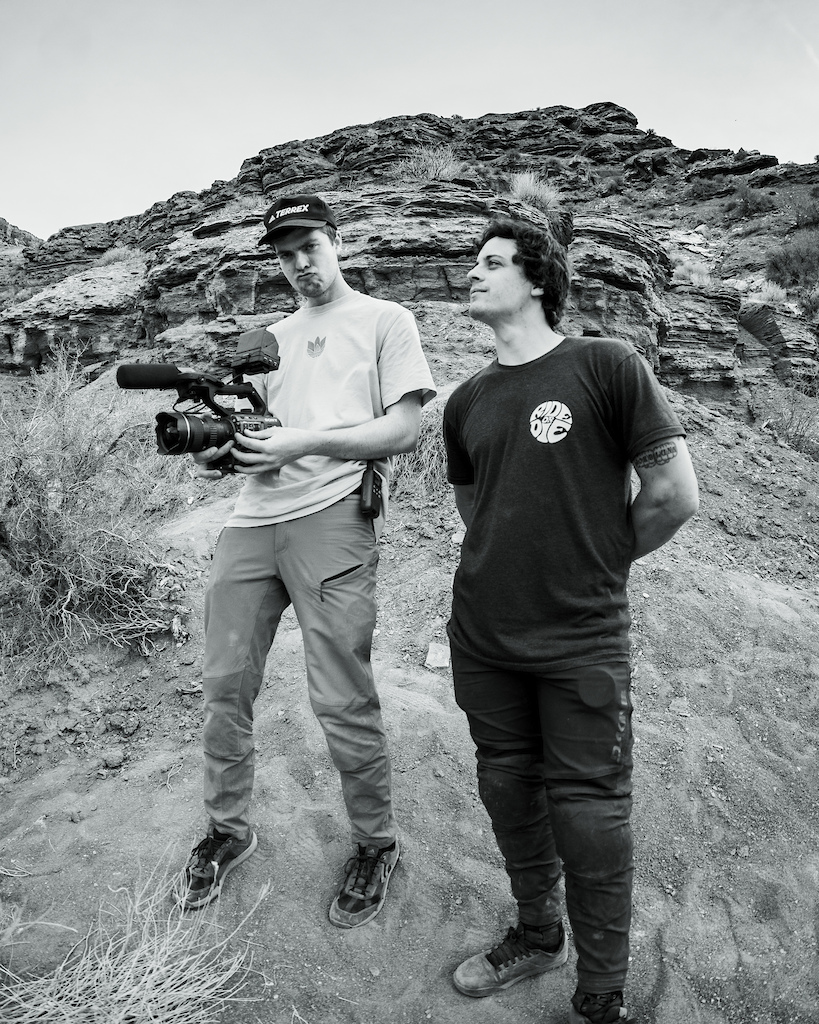 Tory Powers (Holding the camera) and Carson had spent the most time out in Virgin, yet had never worked together before. It was great to see the two work to create some incredible shots. 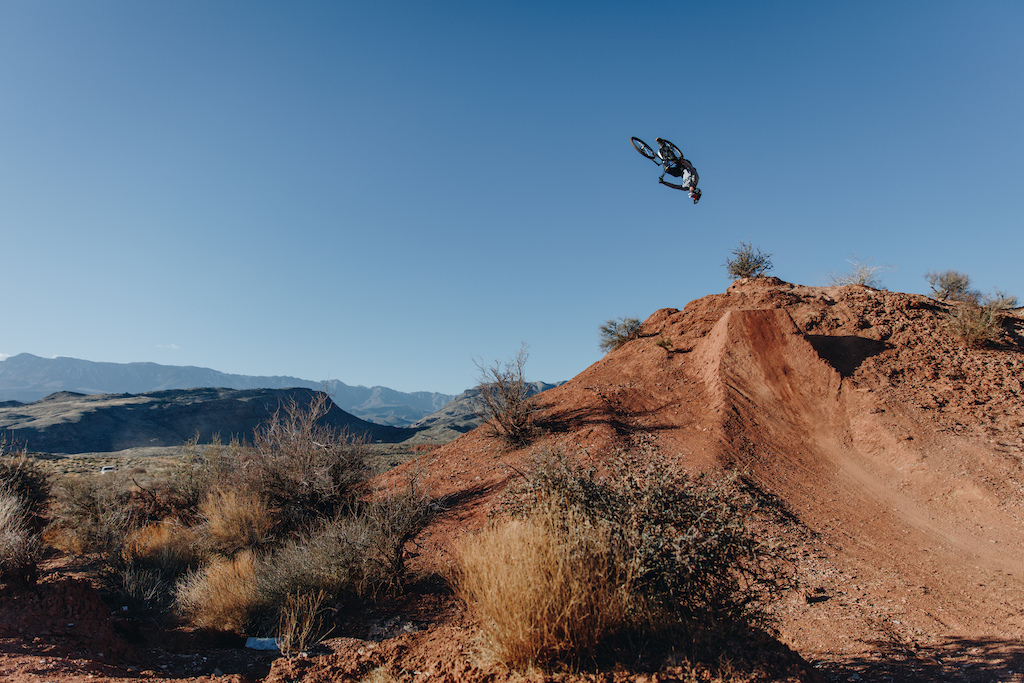 Dylan Crane came out to Virgin ready to show he was more than just a racer. Unfortunately, he may have been overambitious and injured his ankle attempting to flip this hip on day one. Thankfully, he was able to nurse it through the rest of the week and still get some riding in but he’d be the first to tell you he was hoping for a lot more. 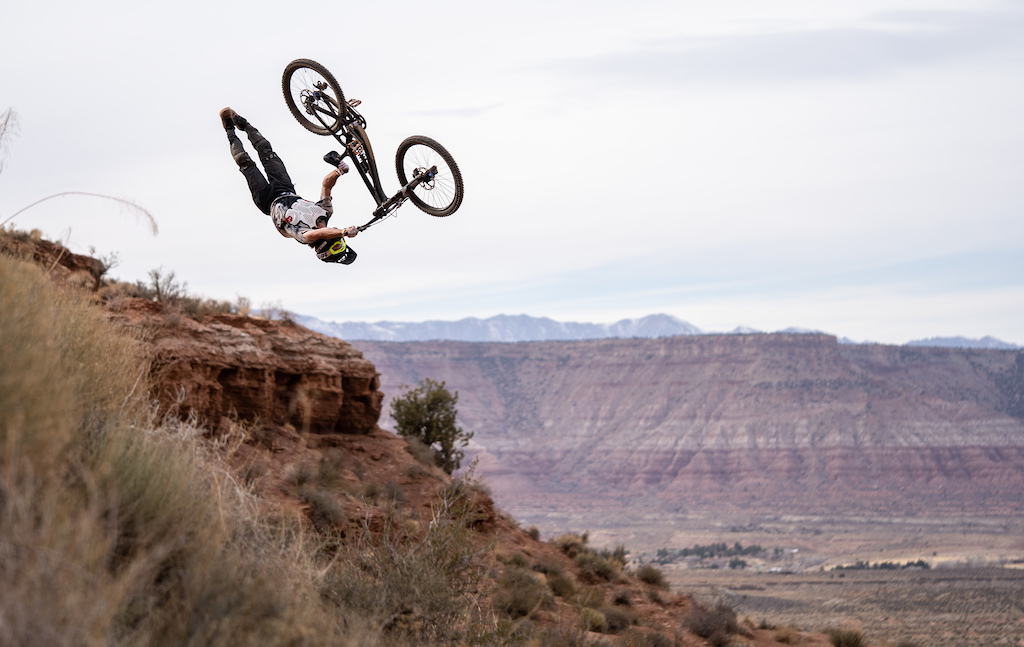 The final session was one to remember. After a week of progression from everyone in the desert, the level that was brought to this trick jump was a sight to behold. Kurtis Downs certainly left it all out there and showed us exactly what it takes to be a Nitro Circus athlete.
SR Suntour wants to extend a massive thank you to everyone involved and we hope to bring everyone together more often. Learn more about SR Suntour and the 2021 product line here.

enduroNZ (Apr 9, 2021 at 13:04)
Suntour seem like a genuine contender to fox and rockshox but good luck trying to find one of their high end forks on the market

I am running a SR Zeron coil on my trail eMTB and a SR Durolux on my Enduro eMTB with TriAir shocks on both, easy to dial-in & easy to work-on

scottyrecon (Apr 13, 2021 at 6:10)
Using Suntour Aion ‘s on my trail bike. More than happy with them for the money. Solid and easy for the home mechanic to work on. They deserve more recognition.
Below threshold threads are hidden

trailsmurf (Apr 12, 2021 at 11:00)
Brands need to let PB write the articles, their copy is always so lame and so cringe and reads like a corporate memo, like that classic meme of Steve Buscemi with a skateboard and backwards cap....

"The trip turned into a punk rock array of fast riding and friendly banter"...."it was a completely wild totally PC party where things got rowdy as fudge, property was not destroyed and was actually polished where needed, and every individual got rawkus showing ill levels of respect to all the valuable men and women professionals attempting the mountain biking challenges, and no disrespect to anyone, which is a core value of SR Suntour, along with a strong return for shareholders, creating a lot of synergy over the weekend between all of the professionals.

It was simply, quite fun, which is another of SR Suntour's 4 corporate pillars, until no one called the police, except to report the insane levels of mountain biking skills being thrown down with the bangers and hammers...keep shredding the radness hombres...but be careful not to exceed the manufacturer's recommended Send Level as this level of sick riding will void warranty but may impress your riding companions! (SR Suntour and its affiliates no not endorse impressing your riding companions, we are a cool but non-threatening brand which should be considered as accessible to anyone)"