The White Mountain National Forest features some of the oldest mountains on the planet and some of the highest peaks you'll find on the east coast. Sitting squarely in the center of this vast and stunning wilderness lies Attitash Mountain Resort, host of the POC Eastern States Cup Super-D and Enduro Cups for the 2nd time in as many years. The weekend would see the 5th Enduro of the 6-race series in conjunction with the 6th Super-D of the 7-race series go down in true east coast fashion; with unpredictable weather combined with technical trails making for an epic couple of days on the bike. Word of Attitash's loam factory and technical reputation has spread quickly over the past few seasons, drawing a large contingent of some of the fastest gravity riders in the region to Bartlett, New Hampshire to experience the mountain firsthand. With the legendary Mount Washington watching from behind a veil of clouds, the racing kicked off on Saturday with the Super-D. 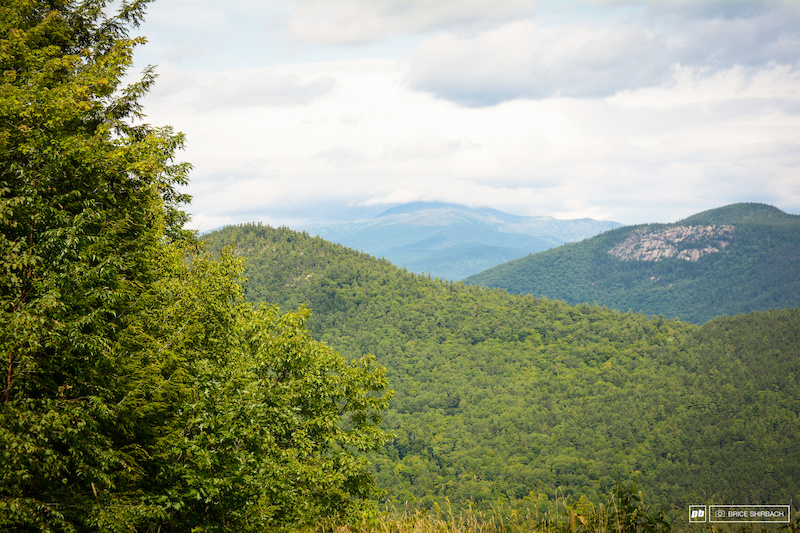 Mount Washington looms large from across the valley. Even with its summit sitting high above the cloud line, the mountain famous for the world's worst weather has a magnetism that seems to authenticate the alpine experience found in this corner of the country. 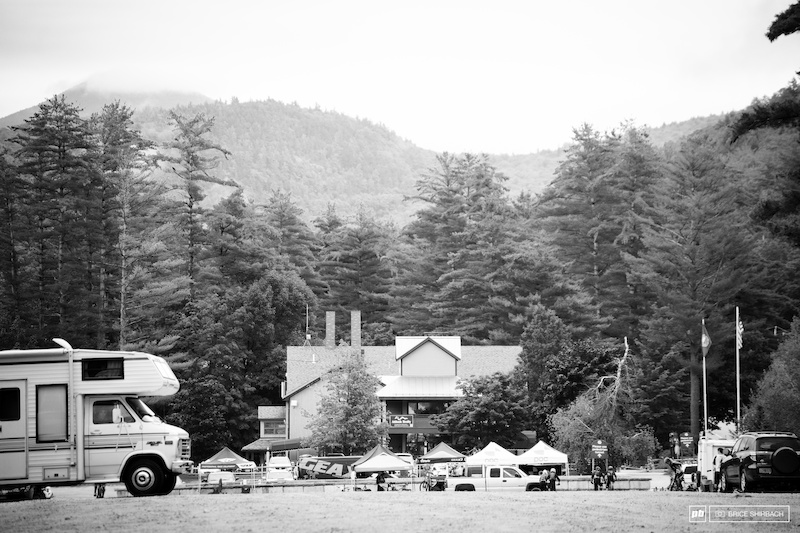 Across the street from the lifts found parking lots filling up fast with racers camping out for the weekend. Those who weren't interested in jockeying with bears for position chose to rent out condos from Attitash Mountain Village; also located directly across from the lifts. 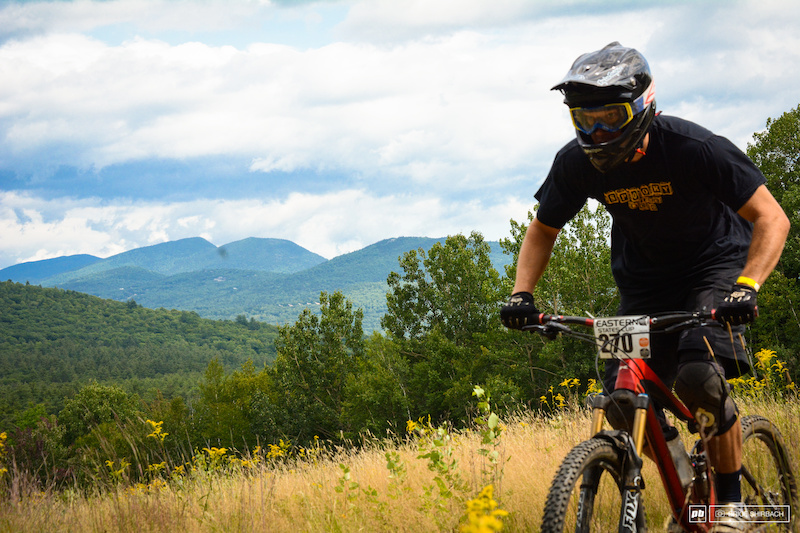 The Super-D was held on a course that featured a handful of open and loose access roads and a lot of steep and technical singletrack. Robert Westover has been a consistently fast performer throughout the season and this weekend was no exception, with podium finishes in both races. 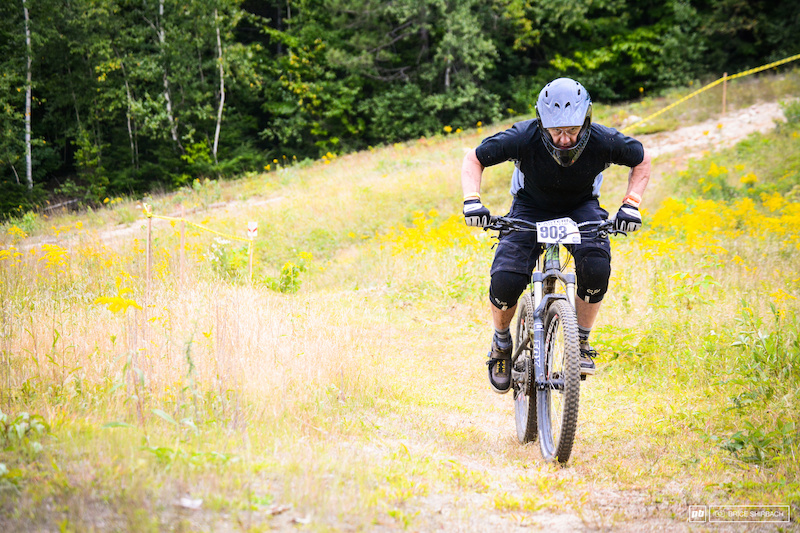 You may notice a prevailing theme of full-faced helmets from throughout the weekend. Open and pedally sections like this aren't the reason either... 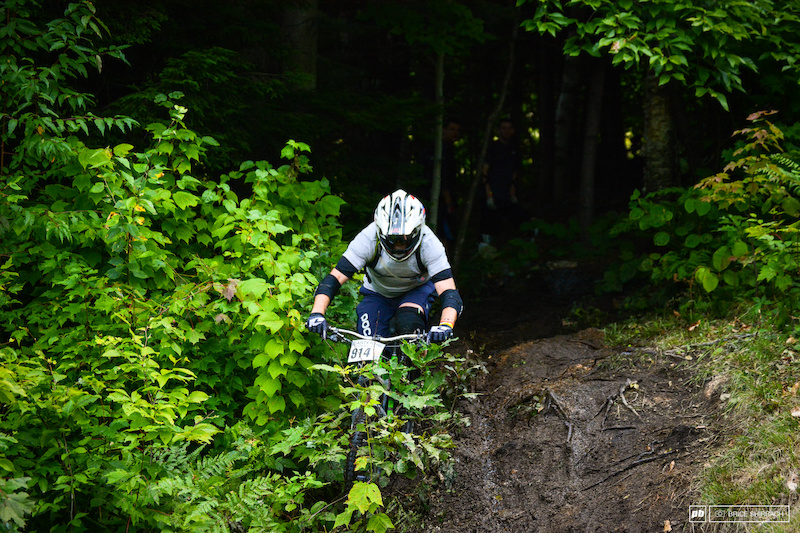 ...it had more to do with the technical, fast and dark sections of singletrack that had many racers looking for the extra level of protection. 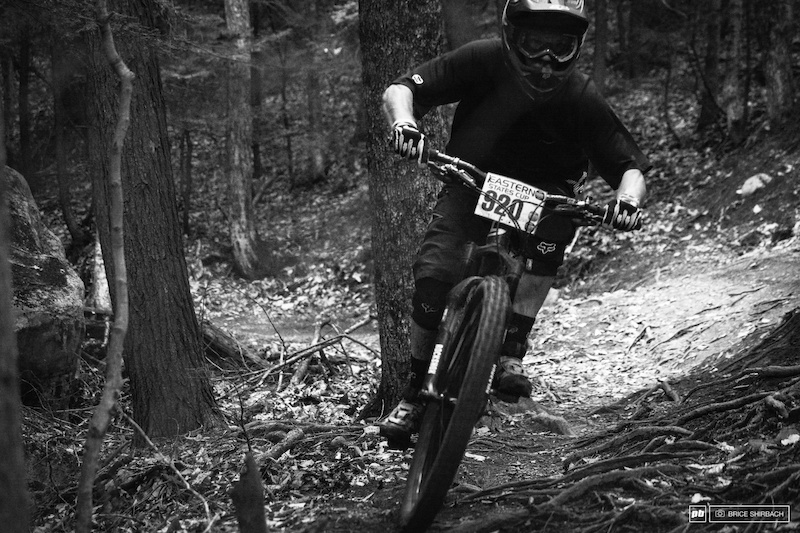 Despite the dark wooded sections and occasional slick spots, much of the course was dependable in terms of grip and traction. 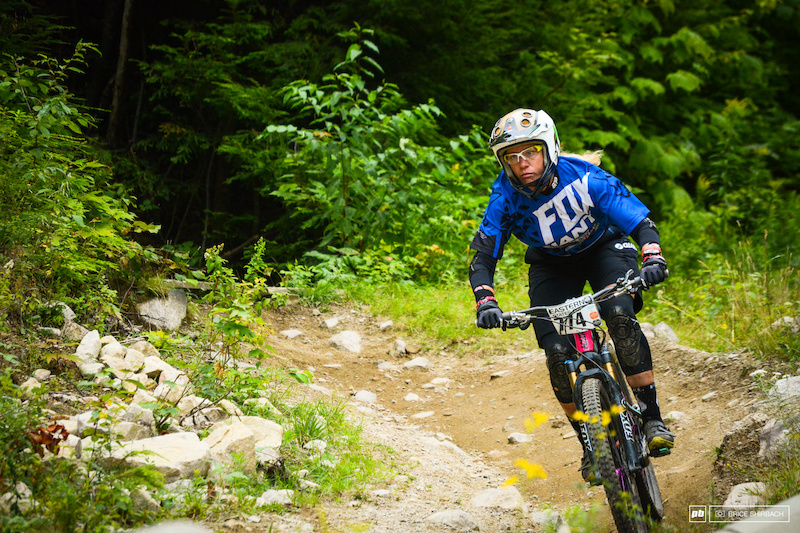 Pro Super D Women's winner Amy Alton is as easy going and nice as they come; don't let this game face fool you! 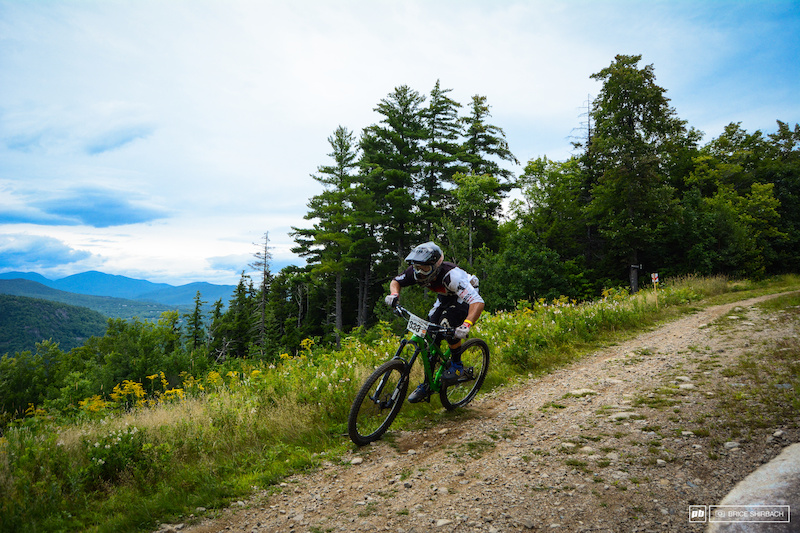 One Industries and People's Bicycle pro Anthony Coneski was arguably the fastest rider through the top half of the course during Saturday's Super-D. He would finish strong on his way to a 4th place podium spot. 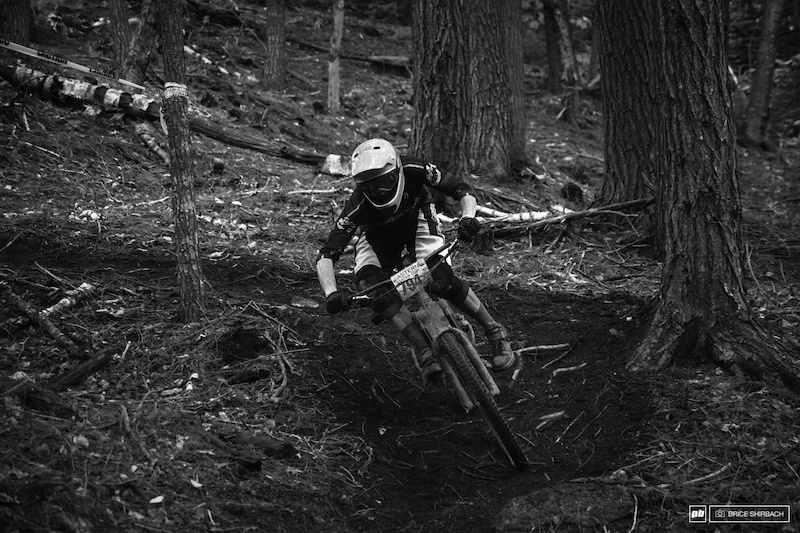 The woods were lovely, but they were also pretty dark and very deep. Cornelius Rand didn't seem to mind too much. 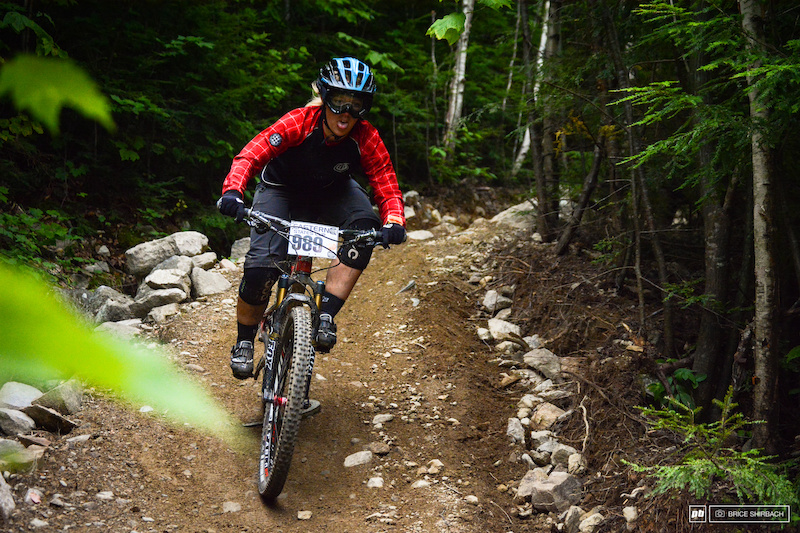 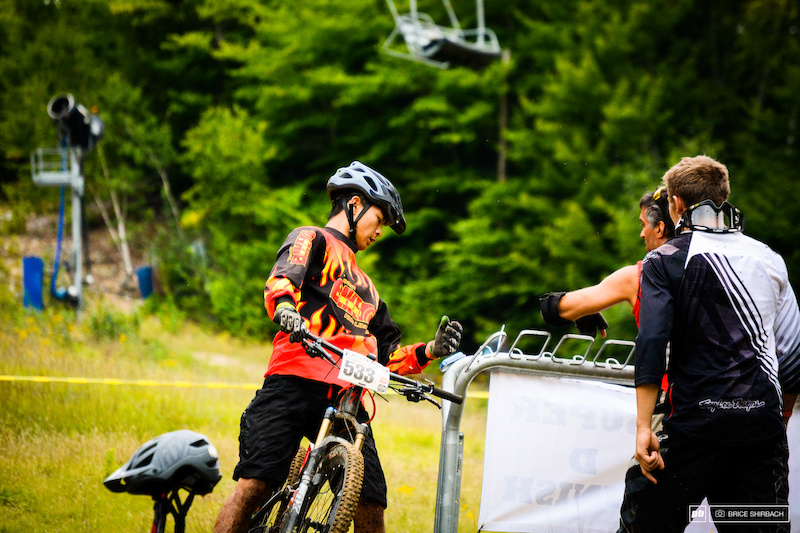 You gotta love the camaraderie found throughout our sport and community. It's easy to blow through tape or miss key sections of a course in the heat of a race, but thankfully the riders here are always around to help. 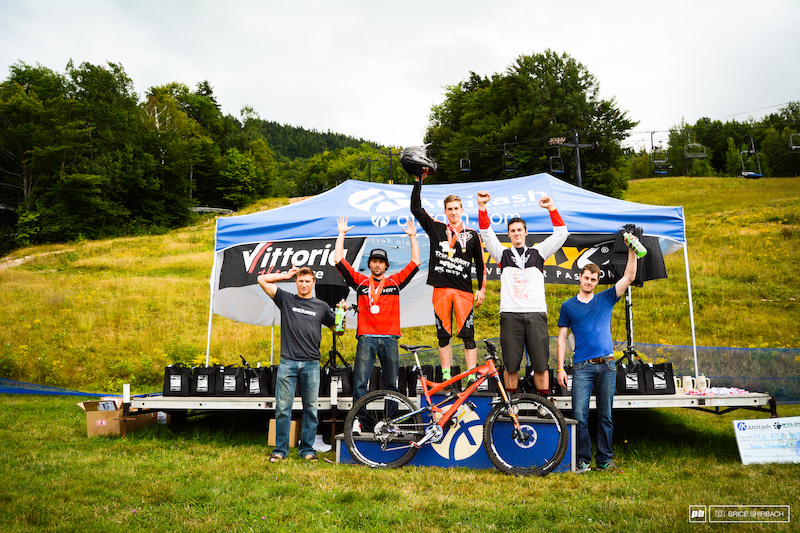 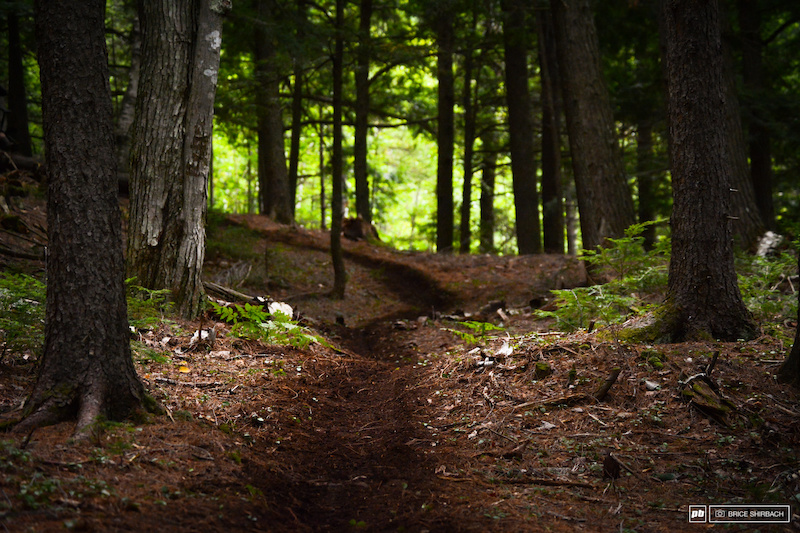 Heavy rain overnight and early in the morning prior to Sunday's Enduro could not eliminate the high loam factor found throughout many of the stages. Riders were eager to get on the lift and kick things off. 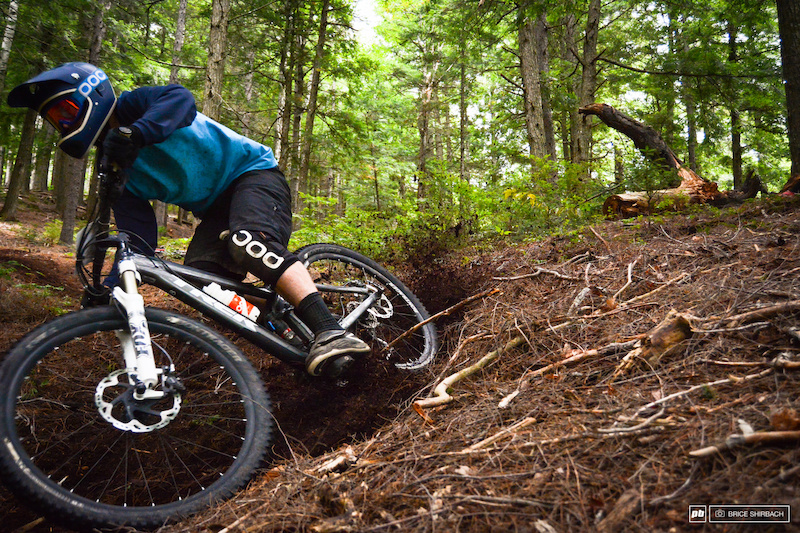 POC's Adam Morse; case in point. Adam would take 4th overall in the Pro Men's category once the dust...er...loam settled. 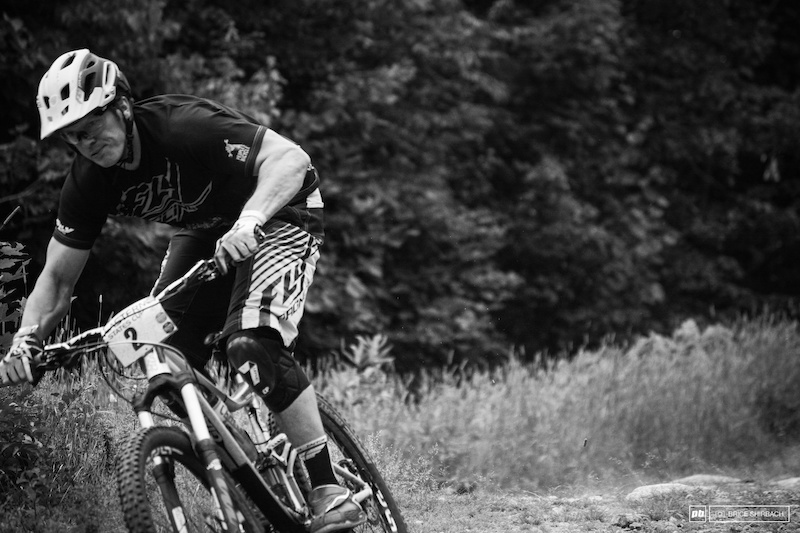 Jason Scheiding is closing in on the top spot in the overall series' rankings for the season. 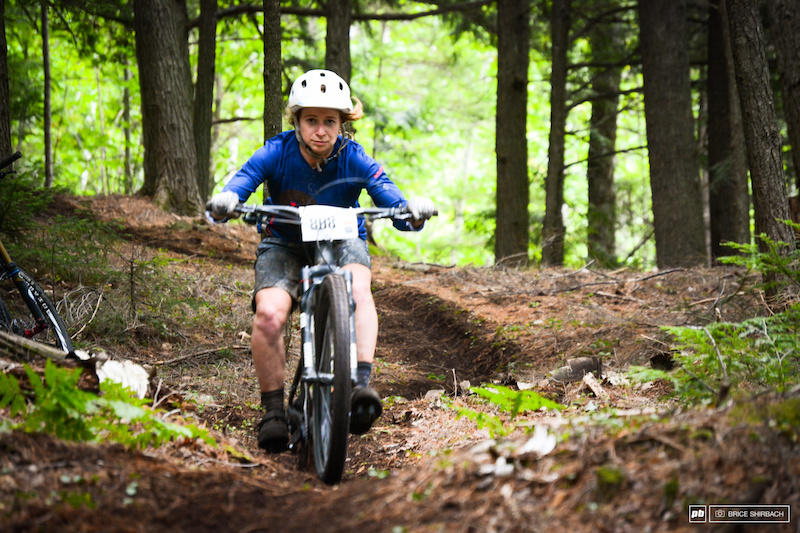 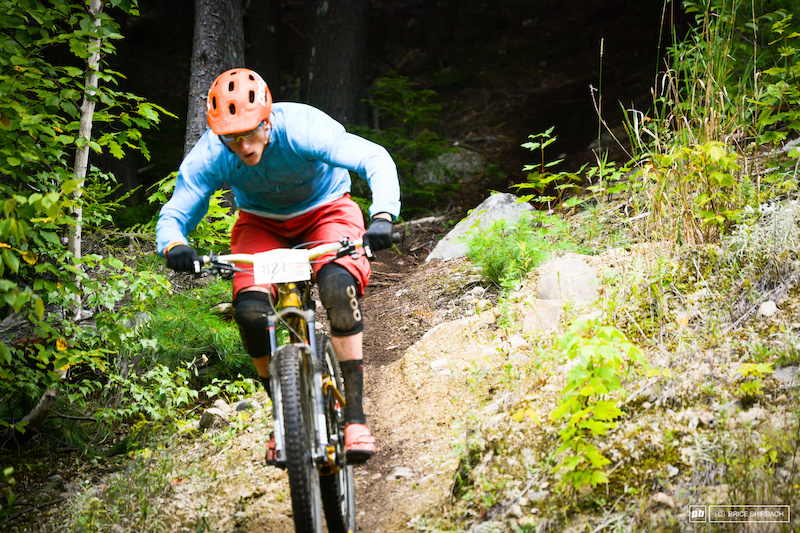 It's all about exit speed and Michael Sampson had plenty of that, on his way to 10th overall for the Pro Men. 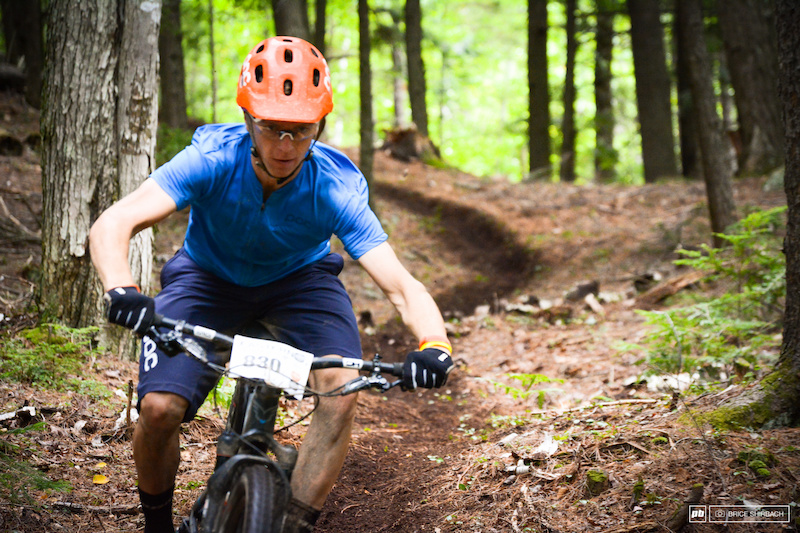 In fact, Tom Sampson knows that too; as he would finish 1 second faster than his brother on the day! 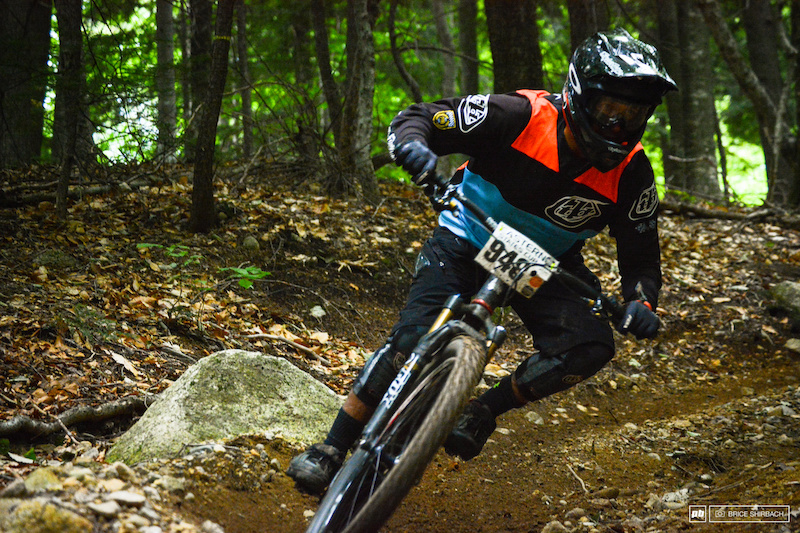 One of the nicest guys and father to one of the nicest kids you'll ever meet, Nelson Maldonado has been a regular on the scene for some time and would end up 4th in his category by the day's end on Sunday. 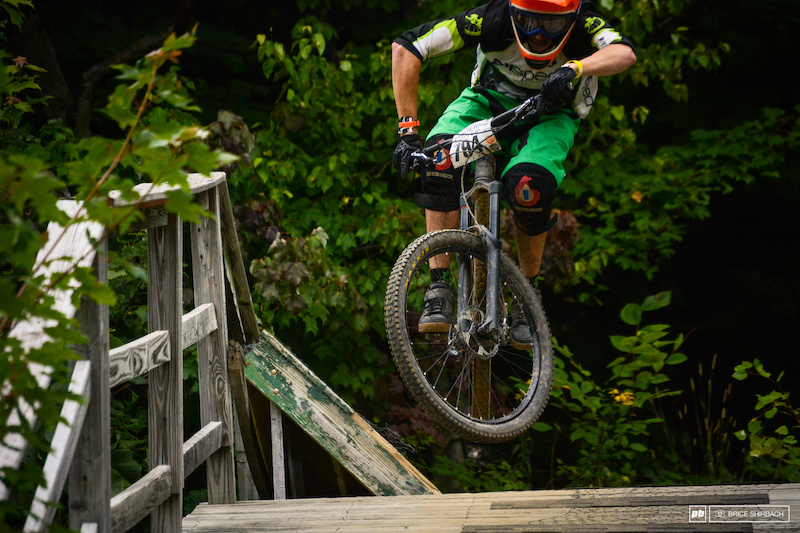 The racing at Attitash was held largely on natural terrain, but what's a bike park without some wood to jump off of? Wall ride to bridge gap, Stage 5. 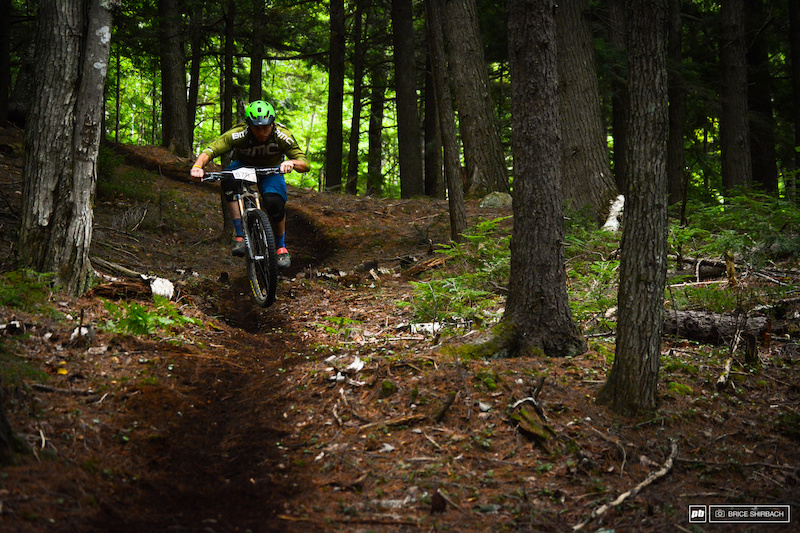 Of course, the real talk of the weekend were the loam factories located throughout the mountain. Bikes and loam go together like peanut butter and chocolate. Delicious. 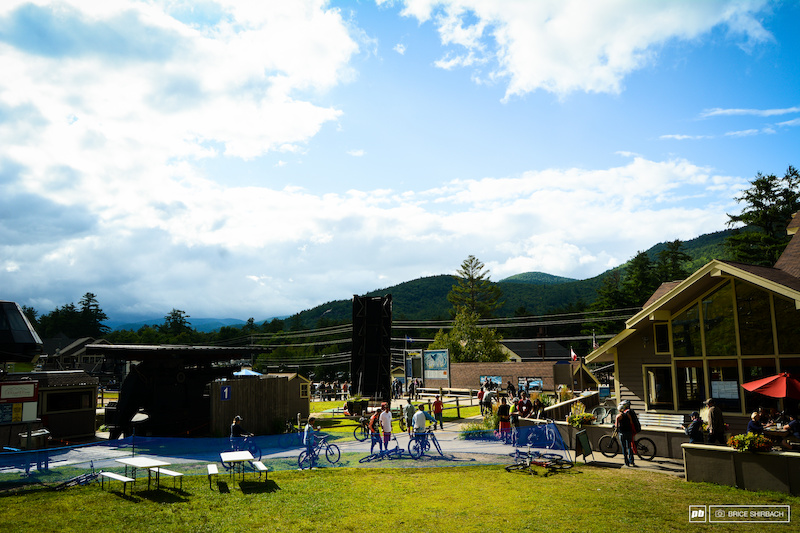 Racing in the mountains means dealing with whatever the mountains give you. Most of the weekend was spent in flat or low light, rainy skies and occasional encounters with the local wildlife. But every now and then we were given a glimpse into the stunning beauty of this place. For amateurs, the POC ESC provides an extra incentive to bring your climbing legs to the enduro. The fastest one up the transfer from the end of stage 3 to the start of stage 4 gets themselves a Fox DOS dropper post! Colin Reuter took home the post this weekend and still had enough energy to finish third in the 30-39 class. 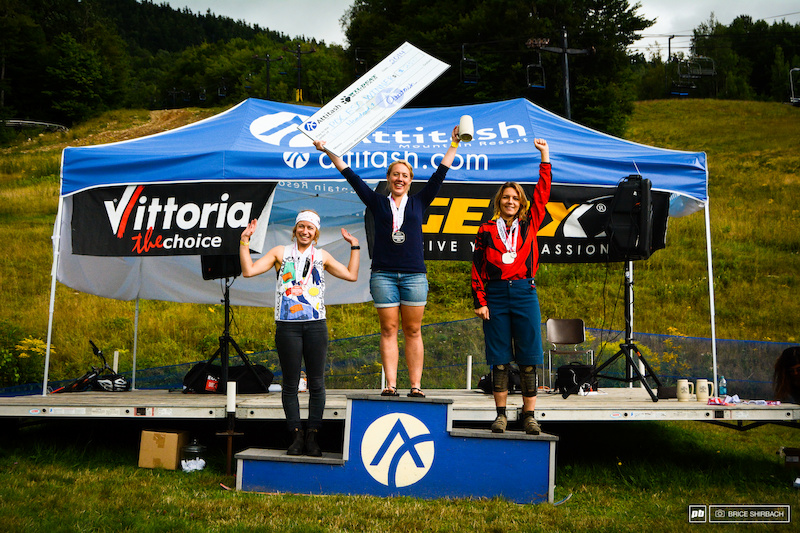 The Pro Women's podium for Sunday with Lauren Petersen finishing on the top step followed by Kathy Golebiowski and Corrine Prevot in 2nd and 3rd respectively. 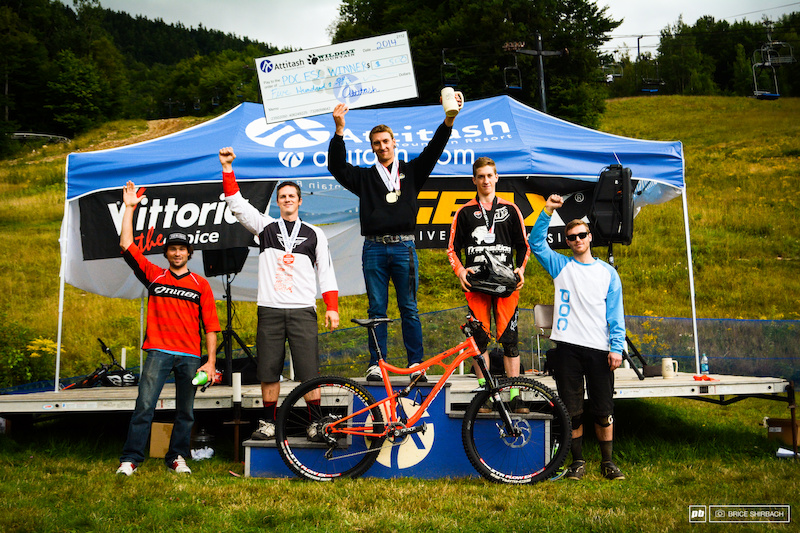 POC ESC Enduro Cup newcomer Kirscher Franck came across the border from Canada to take the win for the Pro Men on Sunday. Madkats Racing rider Isaac Allaire would finish 2nd behind the Xprezo pro followed by Jason Scheiding in 3rd, Adam Morse in 4th and Adam Snyder finishing 5th despite flats on stages 1 and 5! 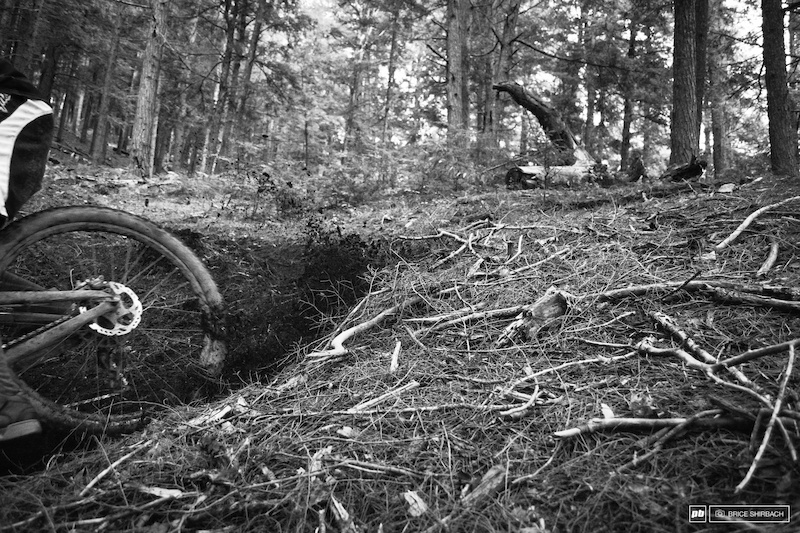 With summer winding down, we are left with one more race in each of the POC ESC Enduro and Super-D cups and after an amazing weekend at Attitash Mountain Resort, the overall series titles are left hanging in the balance. The final races of the season for these series will both utilize double points and with such a small margin between the top men and women in virtually every category, anything can happen. In the meantime, we will sadly bid Attitash adieu for now. The White Mountains are no longer a secret paradise for riders and it was obvious to everyone who raced there this weekend as to why: riding your bikes up and down these amazing mountains is something that everyone should put on their to-do list; racing here is just a bonus. The trails are steep and deep and they're expanding. The future is looking bright for this bike park located within one of the last true wildernesses on the east coast and we can't wait to get back here!

YoKev (Aug 19, 2014 at 15:07)
So what the heck is the difference between Super-D and Enduro, especially in a local race series such as this one?

dualsuspensiondave (Aug 19, 2014 at 20:58)
Super D is usually 1 stage with some tough xc, some good dh, and about 30 or more minutes of it. Enduro is multiple stages mostly dh, and untimed liaison stages with a lot of climbing.